Our last hope and sail

Before the end of the work week we had already ditched the log infested waters of the Swinomish Channel in La Conner. It was clear that by the end of the upcoming weekend, we were going to be in Port Townsend for the winter. There was just no avoiding all the major wind events happening at this time of the year. 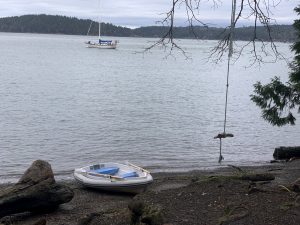 We were lucky that the route we chose gave us the option to spend a few more days and nights in wild before it all comes to a close for 2020. First is Hope Island State Marine Park (not to be confused with Hope Island State Marine Park) which was our mid-week destination to get out of the gallery shoot in La Conner and to avoid yet another southerly blow. We did drop in here last year but I failed to go ashore as this island – like others in the area – are off limits to dogs and Moose with us at that time. A day-hike ensued, just two humans, before a short afternoon motor through Deception Pass, to on old friend; Bowman Bay where we have hiked and kayaked in our land-based-past. 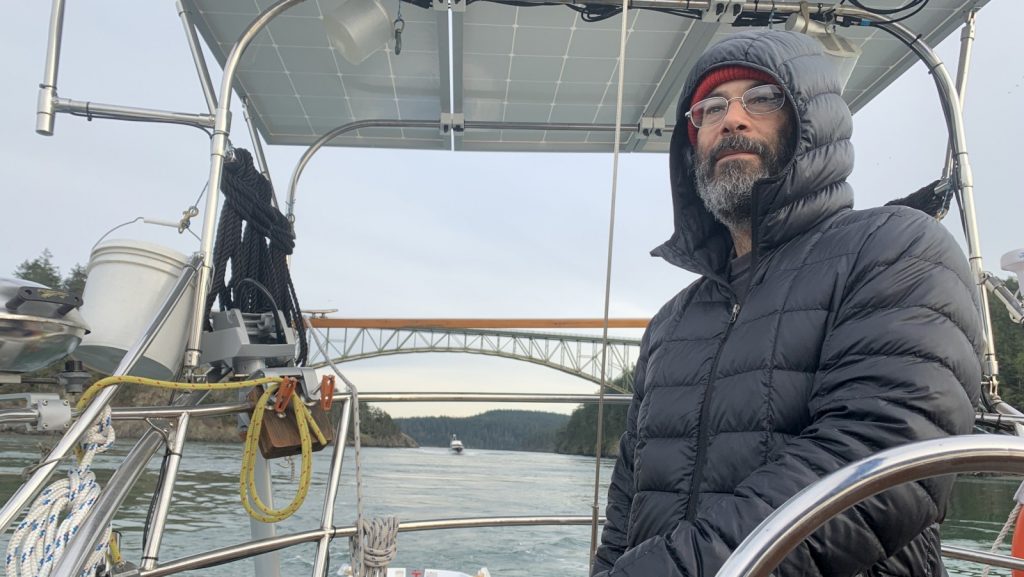 We would drop anchor in Bowman Bay and wait for the right conditions to make the final sail to the south. Just a couple days and the conditions would be ideal for a long haul across the Juan DeFuca Straight. The weather only allowed us to go ashore for a short day hike, otherwise it was two days inside our floating home preparing for the upcoming sail, which was to start in the very early morning hours to avoid the currents closer to PT. 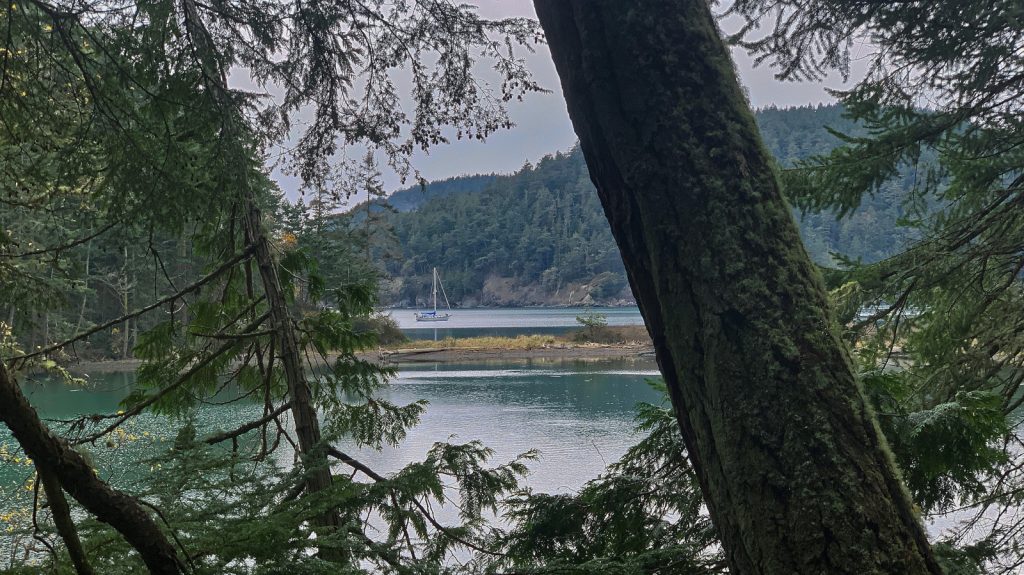 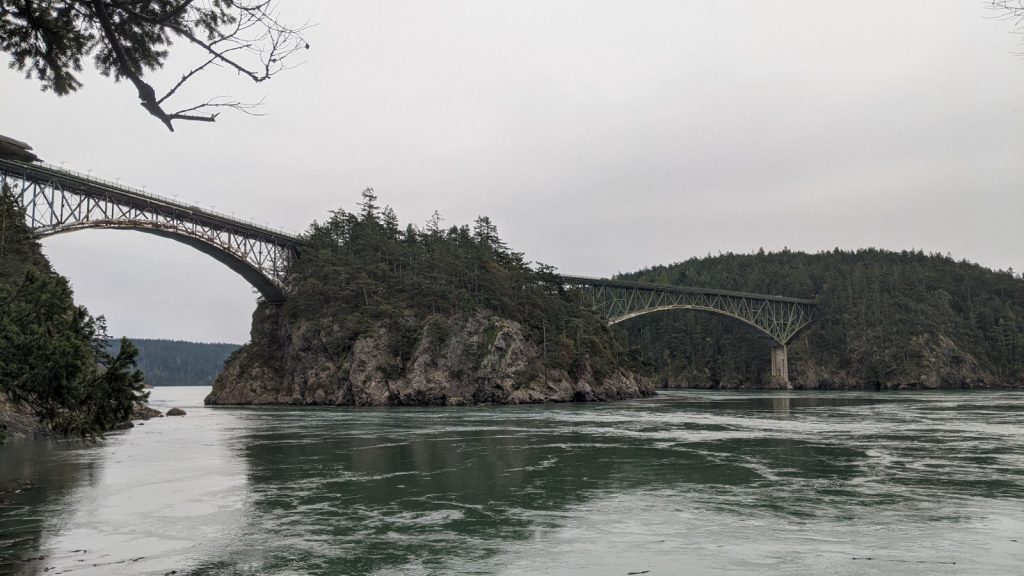 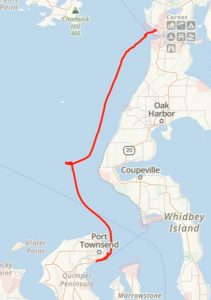 I woke at 5 AM the morning of our sail, enjoyed my coffee, and soon after woke Kerri to get our sailing day going. We were moving shortly after 6 AM, in total darkness. After hauling up our anchor, Kerri stood at the bow with our spot light to ensure we did not run over any crab traps, which could tangle their lines in our prop. The wind was already pretty stiff, as was predicted, but we felt confident that it was within our skillset. It was moderately raining – totally not forecast – but that’s how it goes. We sail on.

Kerri was at the helm but struggling with the gusty conditions. The gusts, coming from just about all directions, made it hard to keep from accidentally jibing (when the boom sweeps across the boat without notice). An accidental jibe is clearly one of her worst nightmares as she speaks of it anytime we are sailing even remotely down wind. To me, it’s sort of like a flat tire; yeah, it sucks, but it isn’t the end of the world. Nonetheless, it was Kerri at the helm when the wind danced around to the other side of the boat and jibed, accidentally. I heard the fear in her voice when she called out my name, but I could only respond with an “it’s OK. Nothing I can do. You are in control. Just steer to fix it”. She really didn’t need my instructions. She fixed the problem, handed me the helm, and we continued on.

My brain could not make out where I needed to go in the near-total-darkness. I was thinking I should be pointed that-a-way, but the instruments argued this-a-way. Eventually I just followed the instruments, as there were more of them than me. They were right. Soon after, we were flying along at 7 knots on a beam reach (wind coming directly on our side) on a most perfect heading. Running parallel between the shipping lane to our west and Whidbey Island to our east with a slight current pushing us south, we were making real good time, real good. Over the course of the next hour the wind was blasting away on our beam in the high teens with the occasional low 20 gust, which was just fine by me. We were heeled over and hauling ass as the world around us began brightening with the sun rising somewhere behind a whole lot of cloud. At least the rain started letting up with the new day. 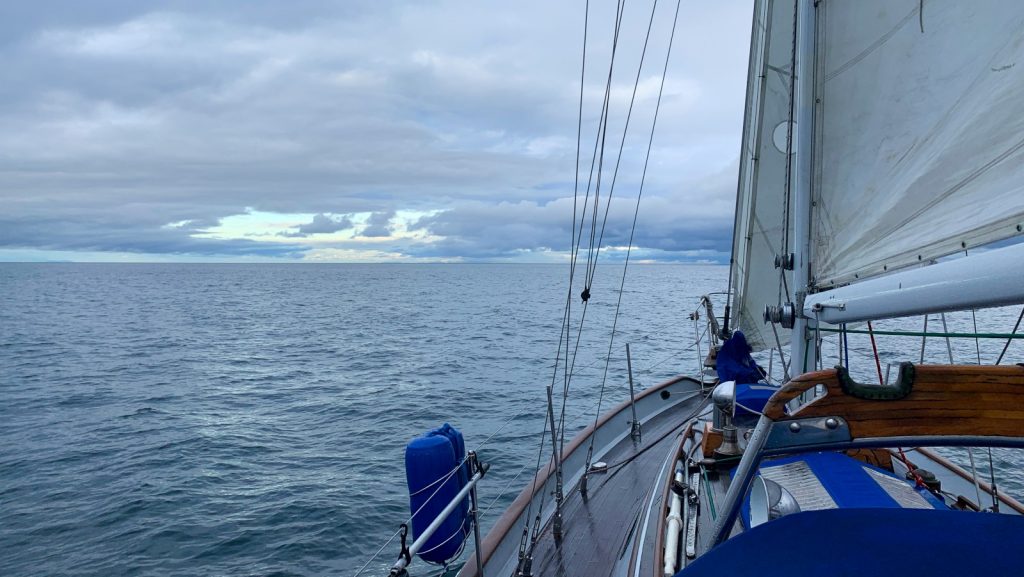 As we approached the opening to Admirlty Inlet the wind would make a direction change. We knew it was going to happen, and planned to ride it south-west, across the shipping lanes, before tacking south-east to make our way through the inlet, with a strong current in our favor. And all of that was working just fine until we crossed the first set of shipping lanes, when the wind decided to strand us out there – not a breeze to speak of. We sat there waiting, but it did not return. Eventually forced to crank up the motor we began making our way to the inlet, passing a tug towing a huge barge along the way. Passing another boat doing like-speed seems to go on forever in boat-life, but we pulled it off. Ha ha, tug! 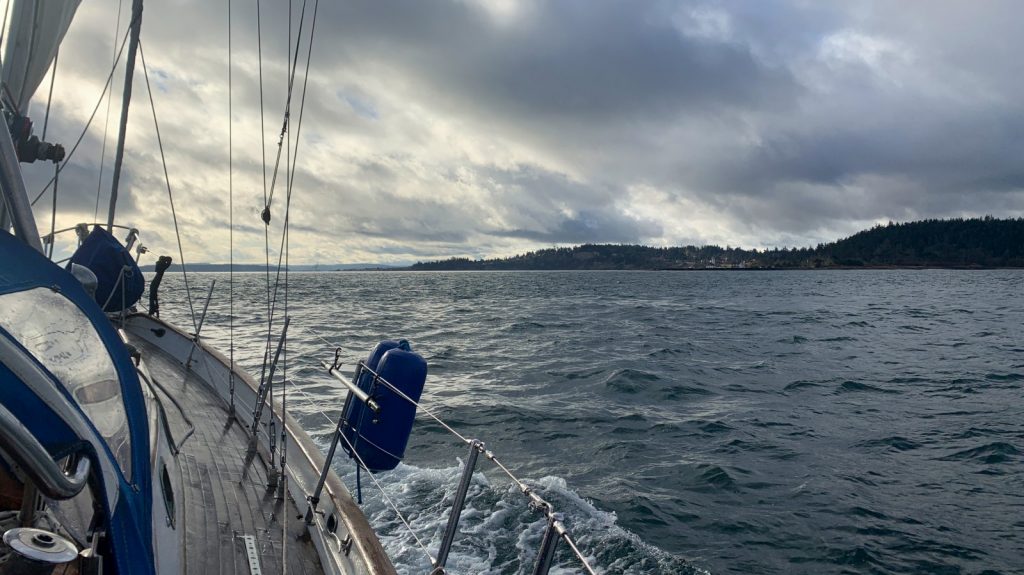 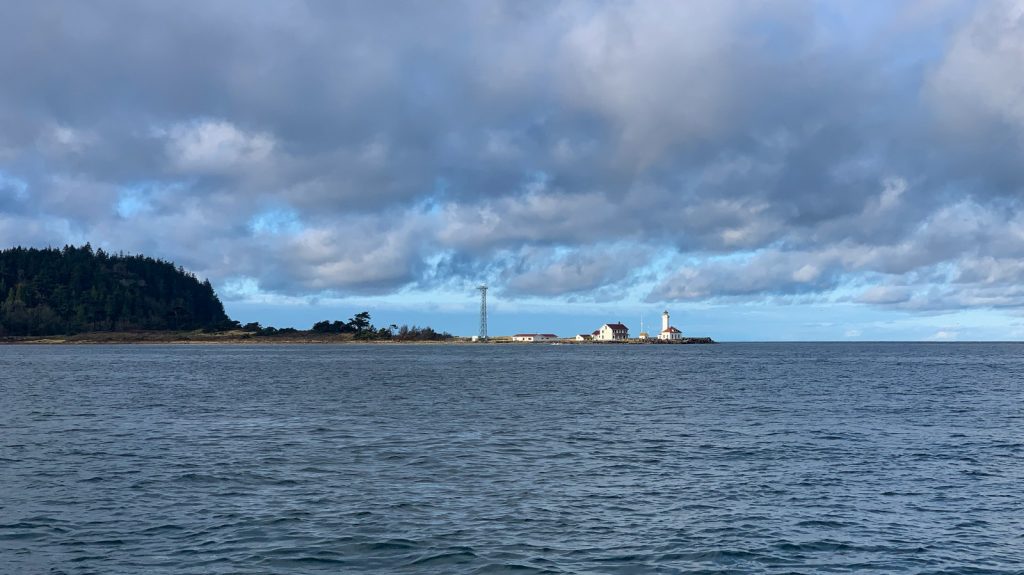 By the time we made it to Point Wilson some wind had returned. Even though we had only a short distance left to our destination, I desperately wanted to end it sailing, not motoring. This might be our last day on the water for months. The sails came back out and we slowly made our way to and past Point Hudson (our winter home) where onlookers photographed us from the beach. I can’t blame them, Meriwether was looking fine out there. We sailed directly in front of Port Townsend, as close as I dared anyway. The wind was calming to nonexistent when we made the decision to drop all sails and motor in the final half mile.

Boat Haven Marina was our penultimate destination, just to fill the fuel tank. It is best to winter with a full tank which prevents any moisture buildup inside. Full of fuel we got back out into the bay, crossing in from of the town one more time as we entered the Point Hudson Marina and parked ourselves in the slip waiting for our arrival – and directly next door to friends we met earlier in the year. It’s going to be nice to sit still for a few months. At least that is how I am feeling on this day. Give it another few weeks and I may be in full complain of the stationary life. Time will tell. 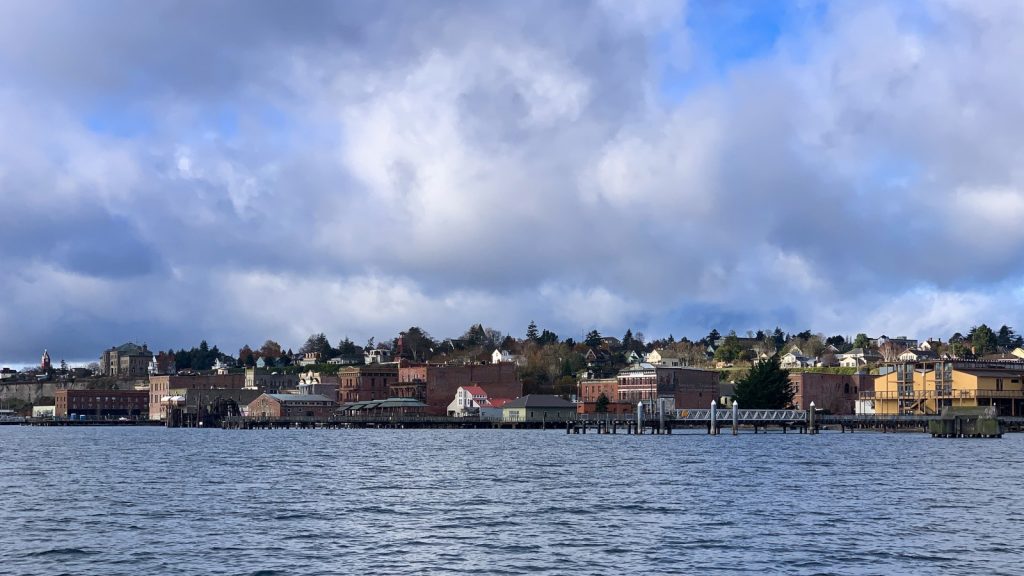