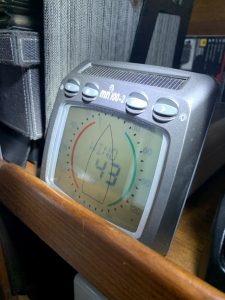 So, we only got to hang around Hunter Bay for a single night. The forecasted winds finally put the fear into us to run back to the safety of a marina. This time we made our way into Anacortes via a couple-hour sail/motor while Kerri worked. The voyage went smoothly, as did the docking and resupplying our firewood and grocery stores. We ended up hanging out in the marina for a few days while we waited for the wind to blow over. No pictures were taken as that is just how we roll when we get into civilization. Kerri did snap this one image, which reassured that we made the correct choice about hiding in a marina again.

The only real happening during our stay – besides the wind – was having to fend off an attack from a neighboring fishing boat. He entered the slip directly upwind of us and as he was tying up the stern of his boat came at Meriwether.  Kerri and I heard him come in, we peek out our portlights as usual, and as soon as I saw his stern being blown I jumped into our cockpit to give a push. We were lucky that our orange floatation ring was there making a heck of a Styrofoam squeal as it was squeezed between two stainless steel tubes, but causing no damage. He was very apologetic and ready to trade whatever information was required to pay for any damages, but there was none so we laughed about it and went on our way. 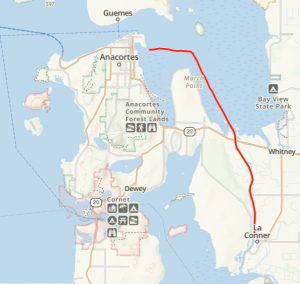 A couple days later the wind was still blowing, but advertised as only in the teens. We pulled out of the marina and was immediately blasted by 20-25 knots winds from the East. The Swinomish Channel is only a few boat widths wide and starts just as we turn south-east. With the wind and breaking waves crashing over our deck, it sometimes was a struggle to keep our girthy boat in the channel. Once we navigated under the highway 20 bridge, the winds were blocked enough to make the rest of our voyage nice and easy.

Our docking in La Conner did not go so well. Knowing that we had strong southerly winds from the south-east the following morning, I wanted to ensure that we docked facing south and on the outside of the dock (to be blown off the dock, not into it). This meant we were going to attempt to dock with a 2.5 knot current from behind. This, of course, went like complete shit, with us struggling for 10 minutes to get Meriwether secured to the dock. Eventually it all worked out – in the rain of course – but we decided that it was not worth all that effort, and would dock facing into the current next time. As you can see, the weather cleared right up and the direction we were facing didn’t even matter anymore. Blah! 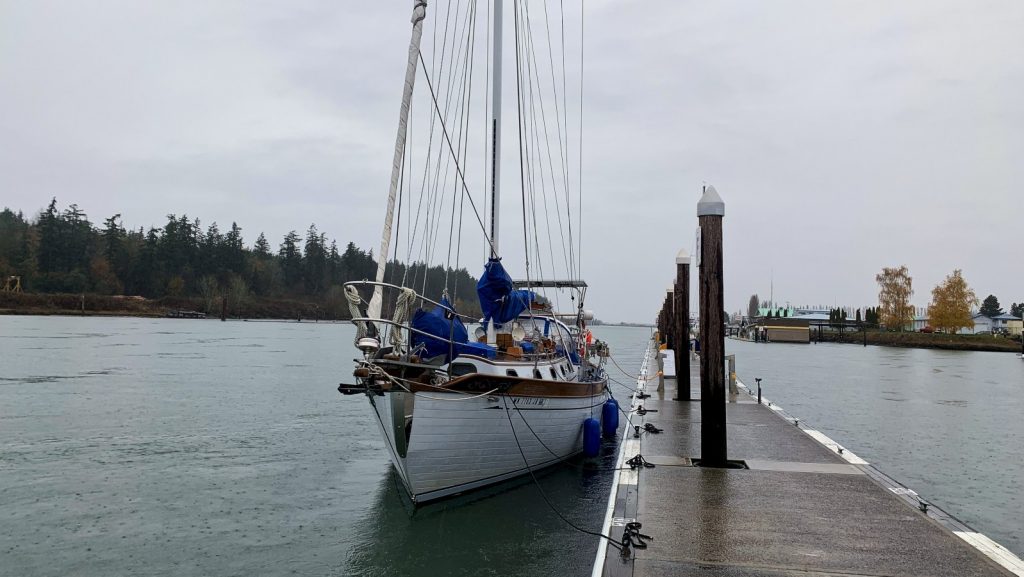 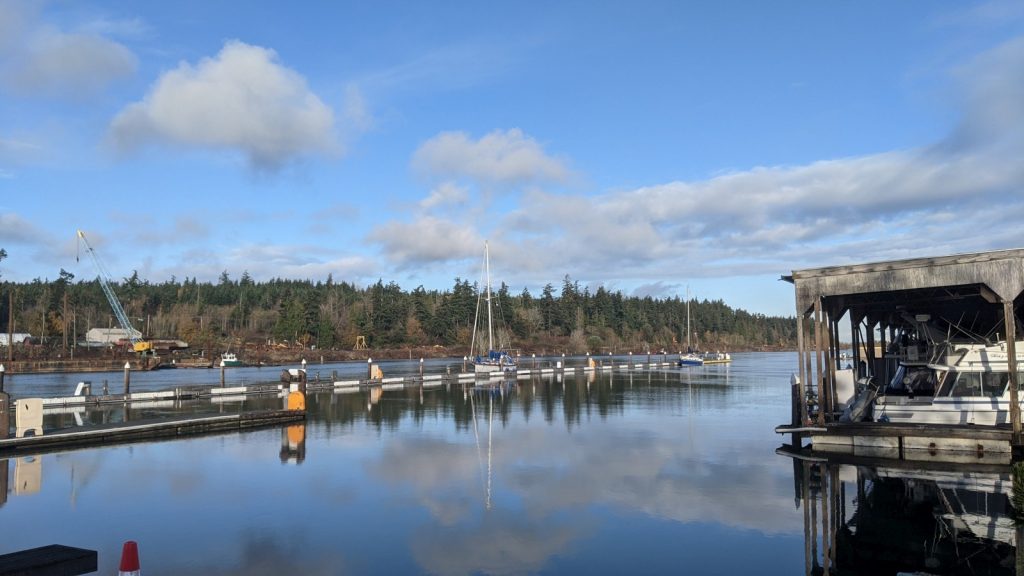 Although the three days in Lan Conner was passed with 120 volt electricity, free showers, and some super-grubbin’ take out Mexican food, we still had something to complain about; logs. Enormous logs ride the current up and down this channel. They are propelled by the 4 knots or more current that flow here. Since we were the only boat silly enough to tie up to the outside of the dock, our boat was taking hit after hit from the logs. Most were small enough to make a thump, but cause no damage, but a few seemed large enough to sink the titanic. I did what I could to fend them off, but a few hours later they would return from the other direction anyway. These poor logs live a life of repeating the same couple miles of channel. Back and forth they drift with the current, never able to drift far enough to make it out of the channel. So sad. 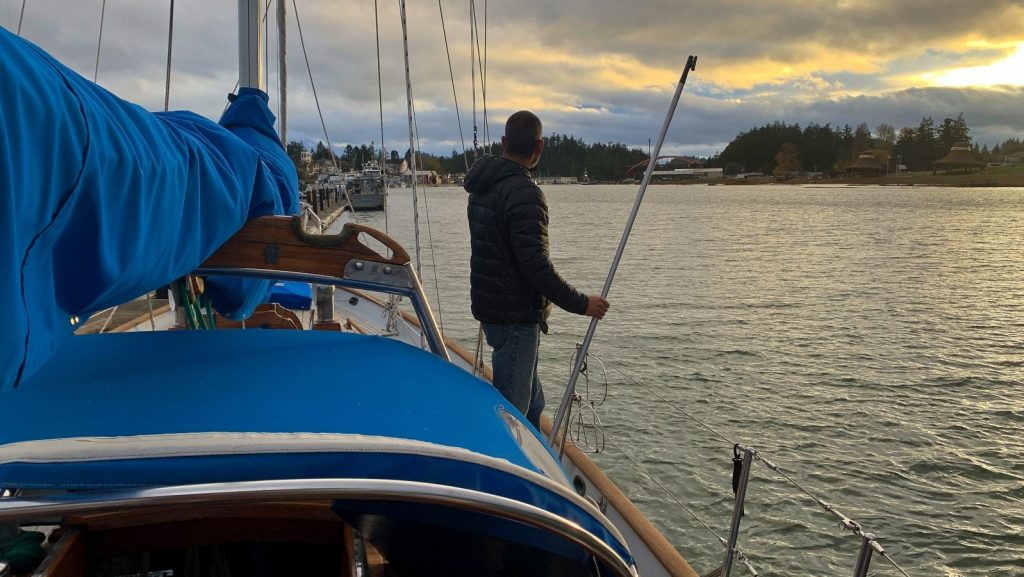 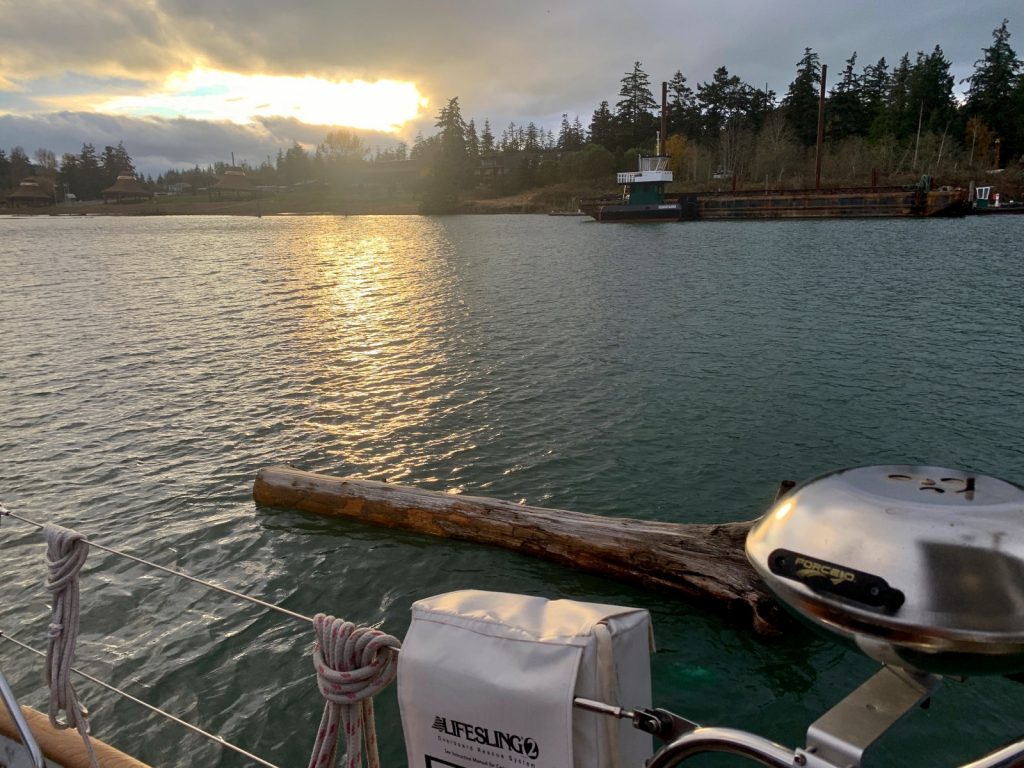