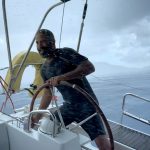 Tim – the original van-tramp, do-it-yourselfer, the real blogger, wannabe survivalist, makes a monkey face when posing for a camera, does not own a single Apple product.

I started traveling in 2010 in a van, clocking in more than 60,000 miles of travel – all over the West, from the Pacific to Texas – in the first four years. What started primarily as weekend road trips quickly escalated to week-long, then multi-week, and multi-month road trips. By the end of 2011 I began full-time living on the road, in the van. At the new year of 2014/2015 I attended a small nomad get together in the desert outside of Borrego Springs, California where I met Kerri and quickly fell for her, and we started traveling together. She has brought me all over the country to hike, backpack, and kayak places I would never have gone. Now, besides being a co-skipper of our sailboat, I dabble as an indie-app developer.

I hit the road full-time in 2011 in a 27′ Airstream, looping around most of the United States, but mostly the West, where I met Tim in 2014, and we’ve been inseparable ever since. I spend four days a week doing freelance web development and design for mostly non-profits, and try to spend the other three days exploring.

Moose – (Retired from boat-life) Terrier/Raccoon mix, sleeps like a dead armadillo, will NOT chase a marmot, secretly eats goose-poo, only goes outside during daylight hours, afraid of random stumps beside the trail.

Moose came to me on a rainy day camped outside a Moose Lodge (hence the name) in Gold Hill, Oregon on November 5th 2013. I offered him some warmth and a meal while I tried to find his owner to no avail. Since that day, he has traveled with me. His given birthday is August, 2013.