Port Gamble turned out to be a bust. The morning after we arrived Kerri took the dinghy to shore to do a bit of fungi hunting along the county trail system. She arrived to signage stating that the trails were closed due to a fire hazard, so she was back at the boat in no time at all. With the whole reason we returned to Port Gamble now shot down in flames (to continued the fire theme) we packed up Meriwether and set out to meet up with friends back up at Mystery Bay, only a few miles from where we were just the day prior. 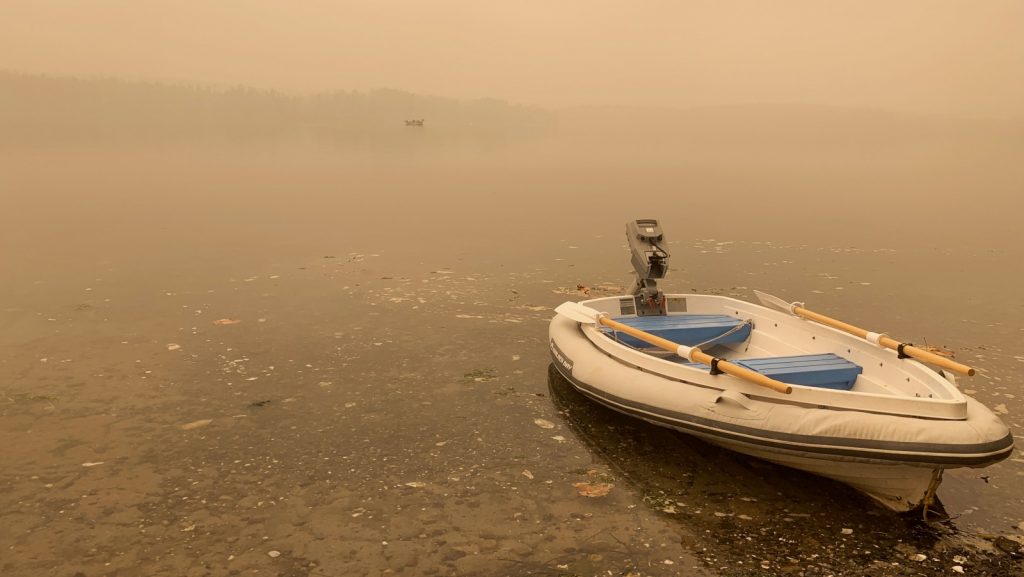 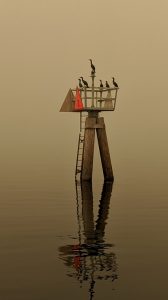 We were motoring, of course, as the wind was AWOL again this day allowing the smoke to thicken – thick enough to prevent any more than a half-mile of visibility. Very yellow, it made for some interesting and surreal photos. This would be our first time sailing with our new radar working tirelessly to keep us safe. With the radar and the AIS working no surprises jumped out of the smoke at us, only having to navigate around just a few other boats this day.

One of the loneliest feeling sails we have ever had, most of the time on the water was spent with no other boats in sight, and a fair amount was spent without any land in sight. Just the fog and smoke accompanied us for most of the trip. Five hours later we arrived to Mystery Bay, snatched a mooring ball, visited for a few minutes, and pretty much called it a night. This was the end of out 100th sail for Kerri and me. It should have been more celebratory, but it was not. 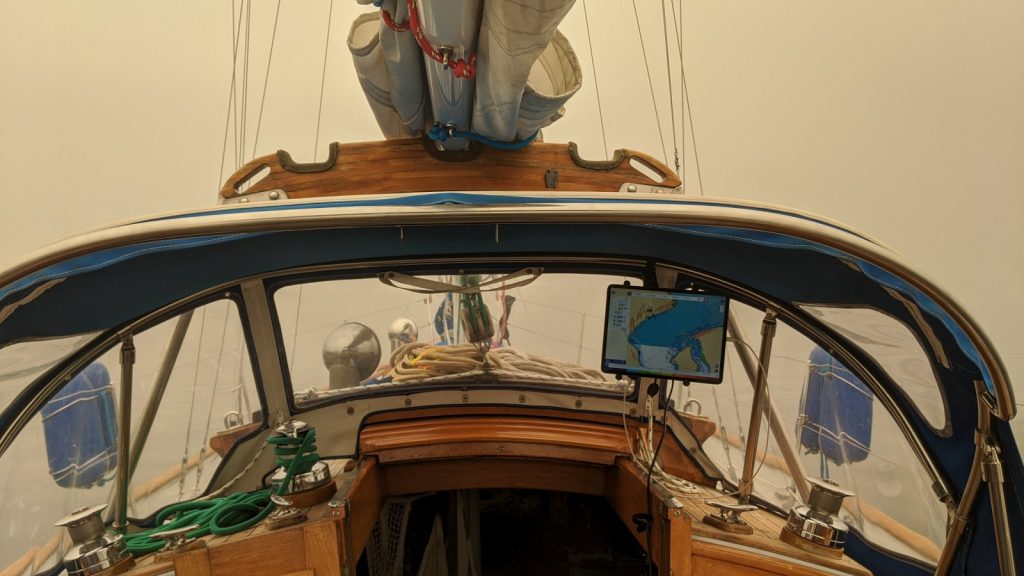 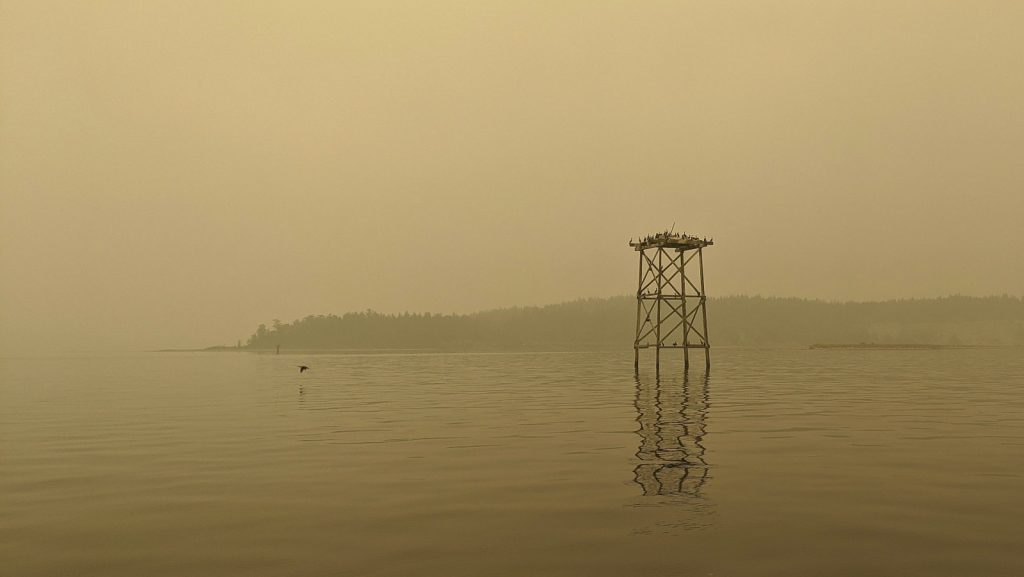 We would be motoring again the very next day (three days in a row of motoring), to cross the Juan De Fuca Straight and back into the San Juan Islands. No wind was forecast for many days so there was no reason to wait, plus all this motoring was all that was keeping our batteries topped off. On our way out of Mystery Bay we were to sail right past Port Townsend. I decided to get in real close, just for a final view of the beloved town before leaving. The smoke in the mid-day sky made it an eerie scene, the place looking mostly deserted. Not completely though as Sean and Stephanie (who we hung out with during our time on the hard) were out for a walk at that moment and saw us gliding past, texting us a video of ourselves a few minutes later. Kerri and I both thought we had heard someone holler our direction, but brushed it off at the time. It would have been nice to have at least waved back at them. 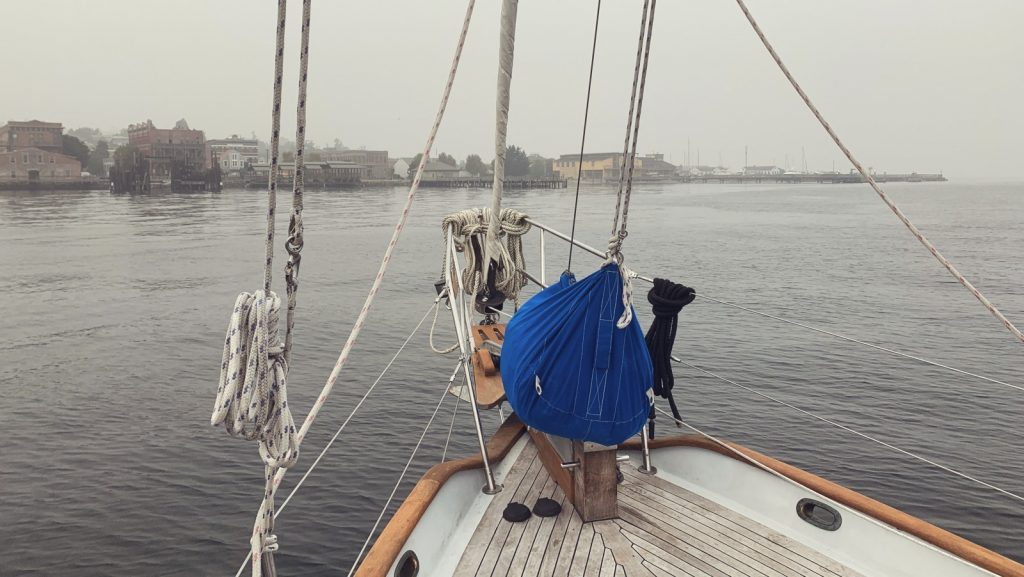 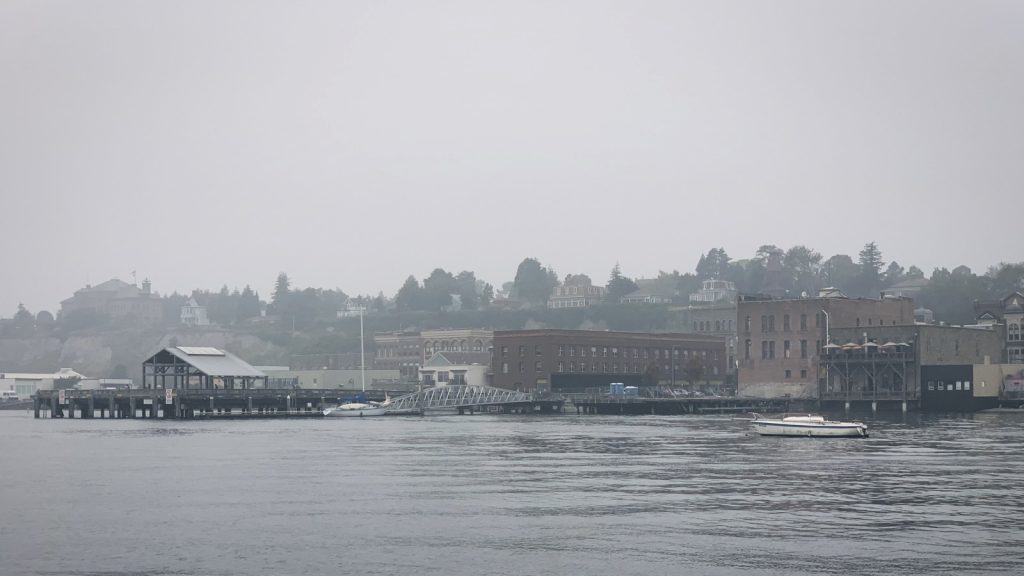 Once past PT and into the open waters of the Straight we had only hours of nothingness to look forward too. With visibility in the quarter-mile range neither land or fellow boaters were to be seen but for one tug hauling a barge up the shipping lane. We stayed just outside the shipping lane, playing it safe and leaving as much room as possible for the big guys if we ran across any, which we did not. Only their fog horns in the distance (and AIS) kept them from being a complete secret to us. 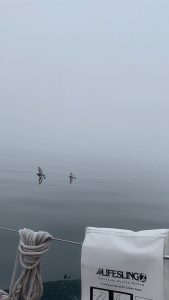 Things were not all lonely, as we got our first winged visitors on the boat. Two birds, chirping away at each other, circled the boat a few times and decided to take a break on our bow pulpit. It took them a few attempts to make the high speed landing without getting tangled in any of our rigging, but they seemed to know what they were doing so we offered no advice. They were quite the cute couple and even with the risk of them pooping on our deck we did nothing to shorten their stay on Meriwether. If they needed a rest, then Meriwether was happy to abide.

It would take a few more hours to finish our day on the water. We have each been practicing taking time off during these longer days on the water, with one of us going below and just doing anything other than being a sailor for an hour or two; cooking, sleeping, reading, whatever (who are we kidding, she Instagram’s the whole time and I watch funny cat videos on YouTube). The downtime really helps how tired we would feel after being “on alert” for hours on end. And just before last-light we completed our journey across the straight and into the new-to-us anchorage of Watmough Bay where we would spend our work week and rest after the three long days of motoring. 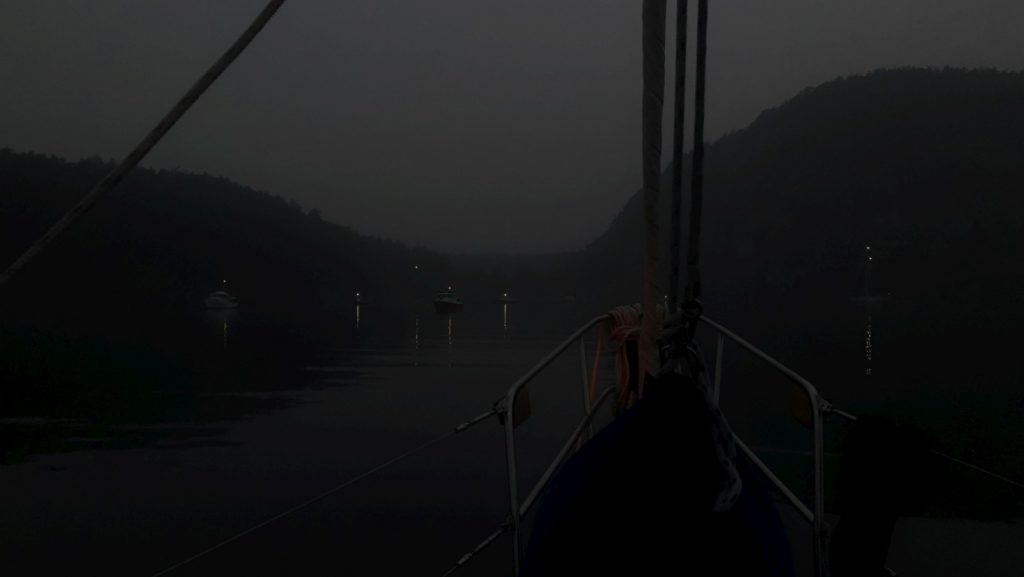