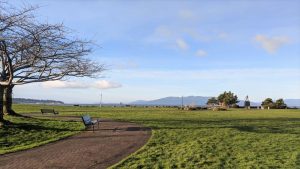 This year we were quite pleased to get back to the boat by the beginning of March. Mostly, we just wanted to get to work on all the projects we had compiled during the 2019 sailing season so we could begin our 2020 season as early as possible. The weather has been laying pretty nicely so far. Sure it has rained a lot, and it has been mighty cold most of the time, but it just doesn’t seem as bad when the blue skies and green grasses make their appearance. Each day things get brighter and better.

While some are “repairs” in the common sense of the word, the majority of the list is populated with “upgrade” items, which is a lot more fun to do. Since returning to Meriwether two weeks ago, and with a somewhat sore back that Big Blue left me with, I got straight to all the work. For the life of me, two weeks later, I can’t recall much that I have done except installing the sails, and spending three days cleaning out the bilge some more trying to make it clean enough to use our bilge pump in the water.

To date we have only emptied our bilge water into a nearby bucket, and hauled it up to the port’s oil-waste disposal location, as it had both oil and diesel fuel in there for many years. After roughly 100 gallons of fresh water being flushed through the system and hauled (by hand) up the dock, I’ve called it as clean as I am going to get it this month. I’m still not comfortable purging out into the open waters, so we will carry that bucket around some more for future ports.

The past few days have been dedicated to the replacement of our water heater. Amazingly enough, the water heater seems to be the one single item on a boat that does not cost ten-times more than it’s RV cousin, so we pulled the trigger on the purchase. Kerri put me straight to work the following morning (to eliminate the huge box taking up space in the boat) and by the end of the day we had a new water heater installed, which works a little too good now.

We still have a long list to go, but items are being checked off at a steady rate. The big ones coming up are a major upgrade to our engine alternator, a whole new radar and AIS system, new chain and anchor,  a new and larger solar array, and the big job of removing the old toilet, black tank, and plumbing to replace it all with a composting toilet. If I can survive the next few weeks, then the remainder of the year will be a cake walk (what the heck is a cake walk? It sounds amazing!)