Our time at Indian Cove was only a single night. Once again, we had to move to another anchorage to protect ourselves from strong winds coming from a completely different direction from the day before. There were not a lot of options along the general route, however one bay stood out for a few reasons; 1) We hadn’t been there, 2) we wanted to go there earlier in the season, and 3) it meant we could sail the last remaining un-sailed [for us] body of water in the islands; San Juan Channel between Lopez and San Juan Islands. T’was one hell of a trifecta, so the decision was easy; Mackaye Harbor would be our next place to hide from a gale. 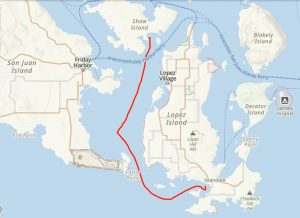 The wind this day would be coming from the North, and we wanted to go South. This combination makes for a super easy, and comfortable, down wind sail. We didn’t even need to haul out all the sails, as just the headsail will pull us along nicely. Sure, we knew that we won’t break any speed records with only a single sail, but the wind was forecast to have 30 knots gusts. Calm and comfortable was the sail plan of the day. The big gusts never materialized making the single-sail plan an over-reaction. I’m happy to not be in a race with ourselves every time we sail, but then again, the current was running in our favor so we came very near breaking our previous speed records without much of a try. Other sailors we have asked agree; riding a strong current is sailing, and definitely taken into account when it comes to a speed record. 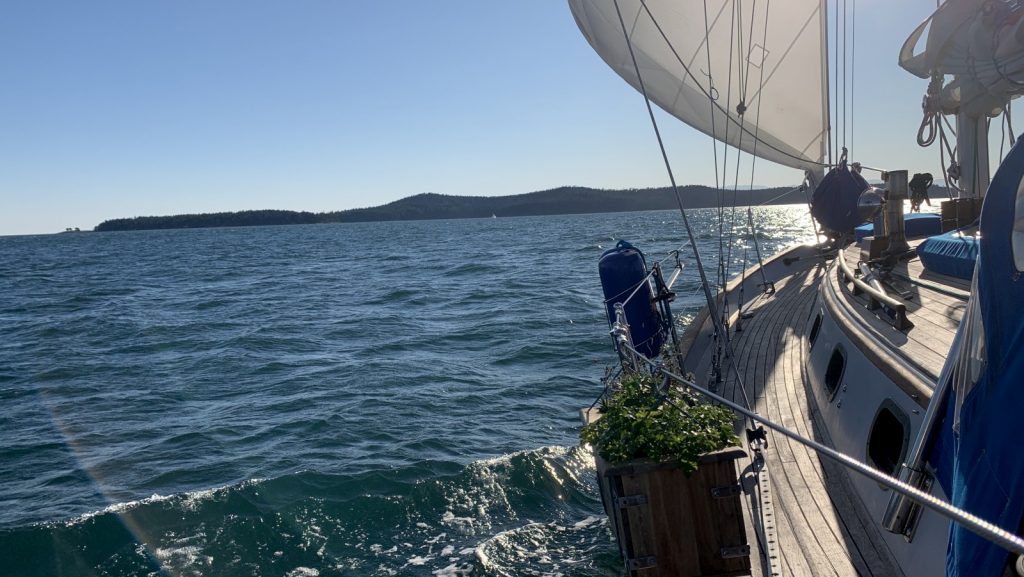 Sailing out of San Juan Channel and passing the old lighthouse at Cattle Point with more than 8 knots of speed under us, we briefly reminisced of our land-based visit to this point. We had walked the dogs on that trail overlooking the rocks full of seals doing their farting-noise thing, what ever that is about. Then the lighthouse was behind us and we were sailing amongst the many rocks and small islands that sprinkle our route to the south side of Lopez Island. Rocks with names like Whale Rocks and Mummy Rocks were more thought out than the standard “danger rock” seen everywhere else. Islands with names like Goose Island, Deadman Island, and Iceberg Island at least make you wonder why if nothing else. It was a pleasure to make our way through these uninhabited-by-human places. It felt like we were much further away from civilization with those empty islands on one side and the wide open Juan De Fuca Straight to the other. 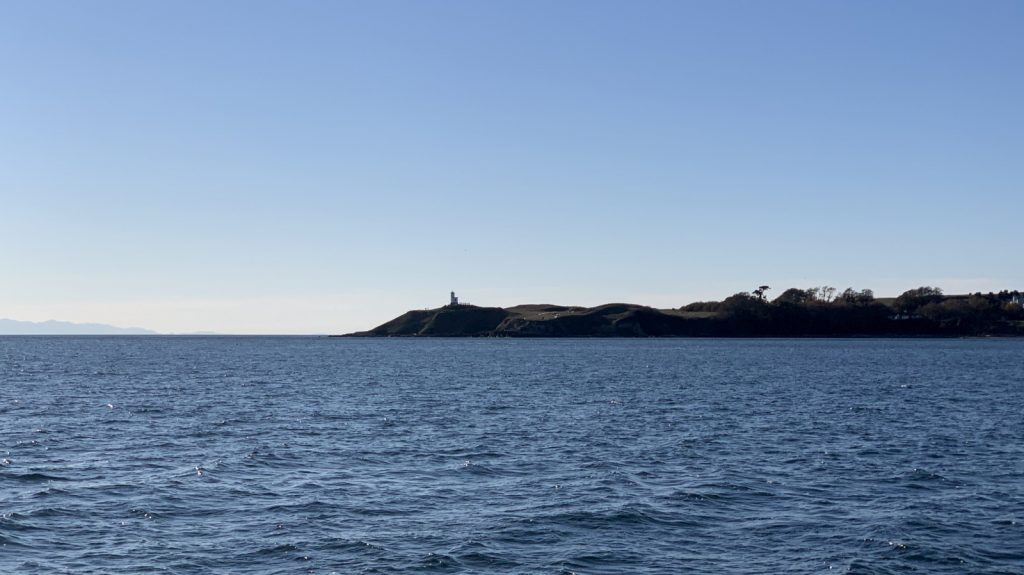 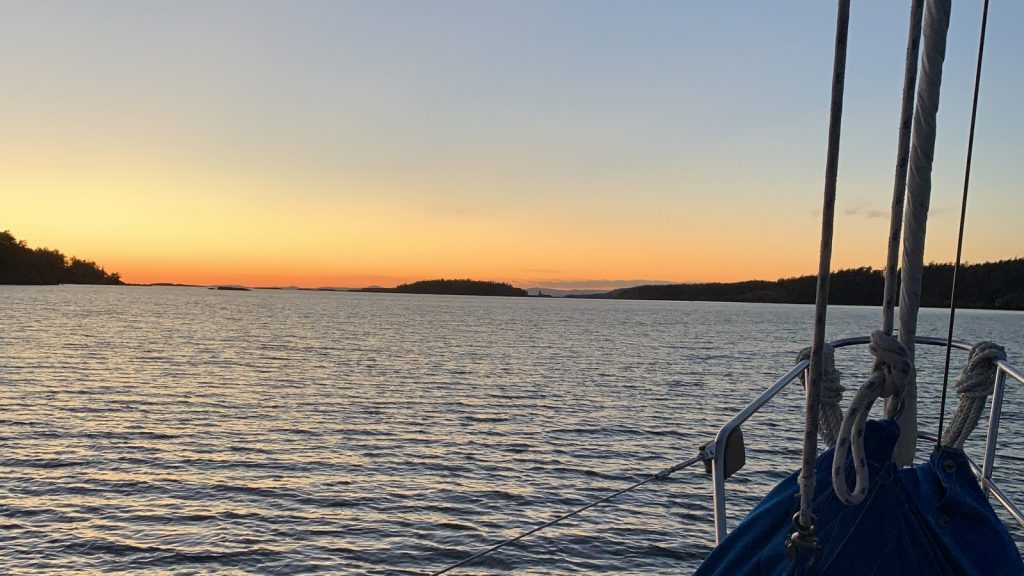 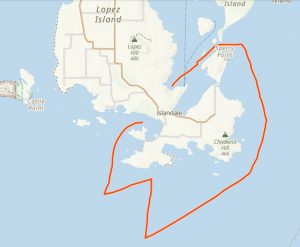 We never even set foot on land in Mackaye Harbor, even after spending a peaceful night at anchor. Thanks again to a gale event scheduled for that night, we were up and moving early [for us] to get to another more-protected cove; Hunter Bay. Not far as the crow flies (we could have walked there) but a good distance as the sailboat sails, Hunter Bay would offer protection from the south-westerly that Mackaye would not. With solid wind coming at us from the south-west, we were allowed another day of sailing, this time into the infamous straight of Juan de Fuca.

Fully expecting the 20+ knot wind forecast to be truthful on this day, we sailed out of Mackaye with a single reef in the main. We flew a full yankee since Meriwether likes to weather-helm anyway. Beating against the wind into JDF so we could clear the tip of Lopez we saw only a high of 18 knots. We could have flown full canvas if we had know, but we both agreed that the peace of mind meant more than the extra half-knot of speed. We had over 6 knots of boat speed in those winds with a reef in the main and down the staysail, so there were no complaints from the crew. The water kept it quite interesting with good sized waves crashing over the bow, thoroughly soaking the deck and sometimes us. The sailing was seriously fun. Giddyup Meriwether! 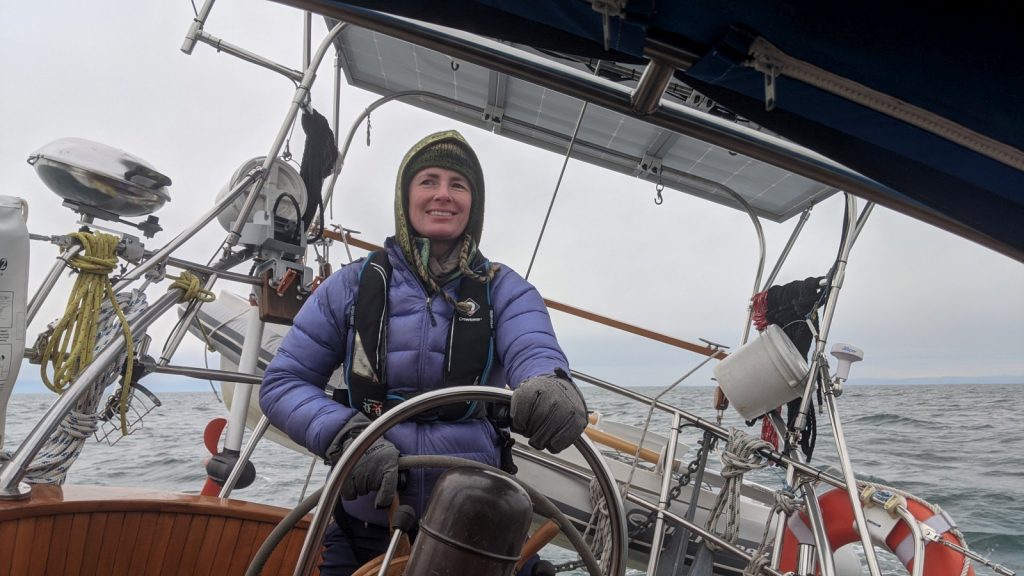 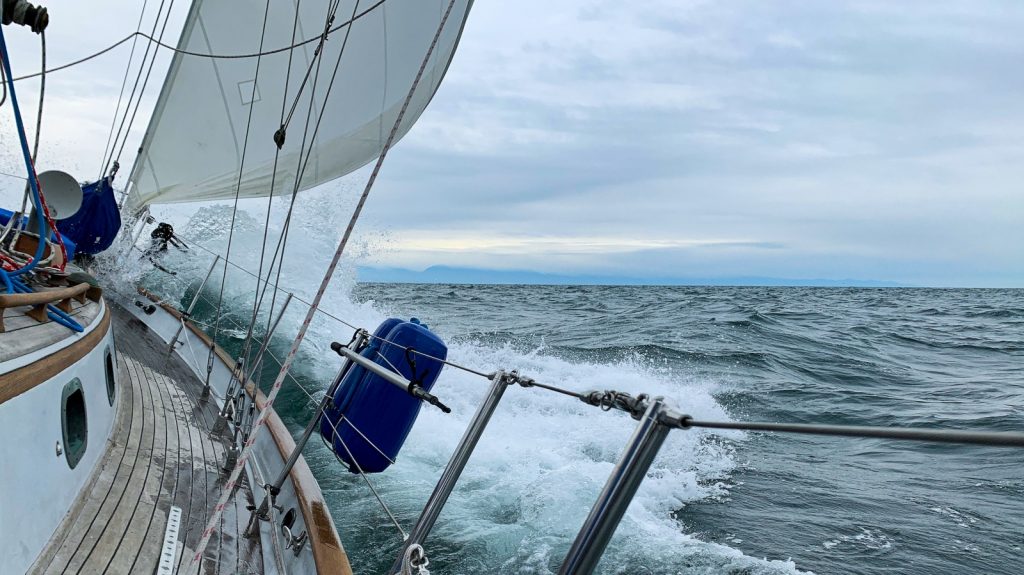 Waiting until we were wind-shadowed by land at Sperry Point we dropped the sails to motor in the rest of the way to our anchorage. Just in time too, as within two minutes of all sails being packed and strapped, the wind blew in at 25 knots to try to ruin our day. It failed, and we left it behind with smirks on our faces. Not today wind… not today. Two great days of sailing as we near the end of the sailing season. Not bad at all.