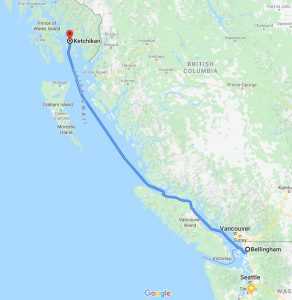 This year we have planned to make the trip North via the Inside Passage to Ketchikan or Petersburg Alaska. The route will bring us up into Canada for our first International border crossing before weaving our way through the coastal islands of British Columbia. It is more than 700 miles of sailing before the end of our year, even without any sight seeing up any of the numerous scenic fjords along the BC coast, which we certainly plan to do.

Meriwether’s motor is getting a lot of attention in preparation of the long hours motoring. With scenic islands and fjords comes a chaotic wind forecast. Everyone we talk to in the community says it will be an 80/20 mix of motoring verses sailing, and our old Perkins needs to be up to the task of the long hours putting away. Upgrades and repairs are already underway, a couple of which became necessary only after some routine maintenance. 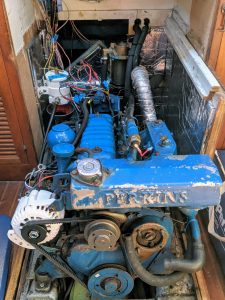 First, during a routine replacing of the raw water impeller I found that the pump’s shaft was wobbling around in the bearings. This would have resulted in a very untimely overheating of our motor at a damn-certainty of the worst of time (between some rocky islands for sure). I had rebuilt this pump back in May of 2019, but it seems that it didn’t take. A brand new pump is on the way to alleviate this problem.

Secondly, we had planned to upgrade our alternator anyway, but in the process of said job I find that the charge-wire from the alternator to the battery was undersized and already on the brink of melting away and taking other wiring along with it(which would have left us stranded between two rocks again). This resulted in a two day re-wire of the entire engine bay to replace all the old and brittle wire with some properly sized wire. This will bring a lot of peace of mind during those long days of motoring with the Lithium battery demanding a long charging time from the alternator.

Already, some of the plans are being changed thanks to the zombie apocalypse ravaging this part of the world right now. Just yesterday it was announced that the Canadian border would be closed with US residents as an exception. It is quite possible that the border will be shut to us soon enough. If so, we will play that hand of cards when they are dealt, but it will be a fun and exciting journey no matter what cards they are. We still have a few more weeks of work to do on the boat before we get to start the trip, but we hope to shove off soon after the beginning of April.