Avoiding a gale in Garrison Bay

Still awaiting our refrigerator part in Friday Harbor, we were sticking pretty close by – within a single day’s sail at least. Our options of new places nearby were quickly depleting after a couple weeks in the general area, so we opted to return to one of last year’s favorites; Garrison Bay, just off shore from the English Camp portion of National Historic Park. Not only is it a beautiful bay, it has a nice trail system for Kerri’s mushroom fetish and would be well protected from an incoming blow in the coming days, or so we thought. 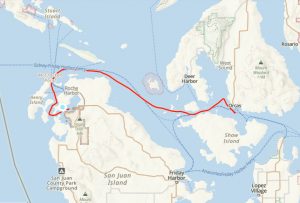 There was little sailing to be had on our travel day. That’s just how it is here in the Fall. It is either gale force winds, or none at all with our travel day being the later. It isn’t all bad though as our battery bank – even with a 50% upgrade to our bank recently – has been struggling to keep up this late in the year. There was only enough of a breeze to sail off anchor, out of Blind Bay, and through Wasp Passage that separates Orcas and Shaw Islands. Once we got out into the San Juan Channel, where the winds were forecast to pickup a bit, did they completely drop off compelling us to engage the motor. If we are being forced to run the motor to charge the batteries, we may as well make a move as well. The motor running even comes with the added benefit of hot water when we arrive to our destination, which is always nice. And so it happened, a rainy afternoon slowly motoring to the north side of San Juan Island (where we just left not long ago) to revisit Garrison Bay… but first, Wescott Bay. 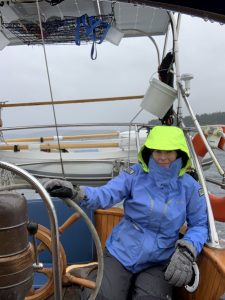 Wescott Bay, just around the corner from Garrison, happened to have a couple boats anchored there. One turned out to be long time friends of Kerri’s, with the other being an online acquaintance of hers. We arrived in the late afternoon with just as the clouds properly opened up on us, complete with a fair amount of wind – which is customary; no wind all day until we want to end our sail. We were quick to set the anchor, get all the running rigging tidied up, and hide in our cabin, wood stove drying all our foul weather clothing, for the remainder of the day. It wasn’t until the following morning that we took the dinghy over to talk with our neighbors. They left immediately after…

It took only a few short minutes to motor around the corner to Garrison Bay where we settled in for most of the work week. With a whole fair weather day still ahead of us, we took off on a hike that I suggested is a bout of insanity. Standing on the deck of Meriwether, looking at the hill above us, I could see a bald spot that clearly had a view of our bay and boat. When I suggested a hike up there, Kerri gave me a questioning look, but I persisted. She referenced her trail map, noting that it was only 250 feet in elevation gain, so we set out. It wasn’t until we got to the top, with a lot of huffin-n-puffin, that the placard noted the 250 *meter* elevation difference from English Camp where Meriwether is anchored. Oh Kerri! Still, it felt good to get outside and get the heart rate up to near-certain-death-range for a change. 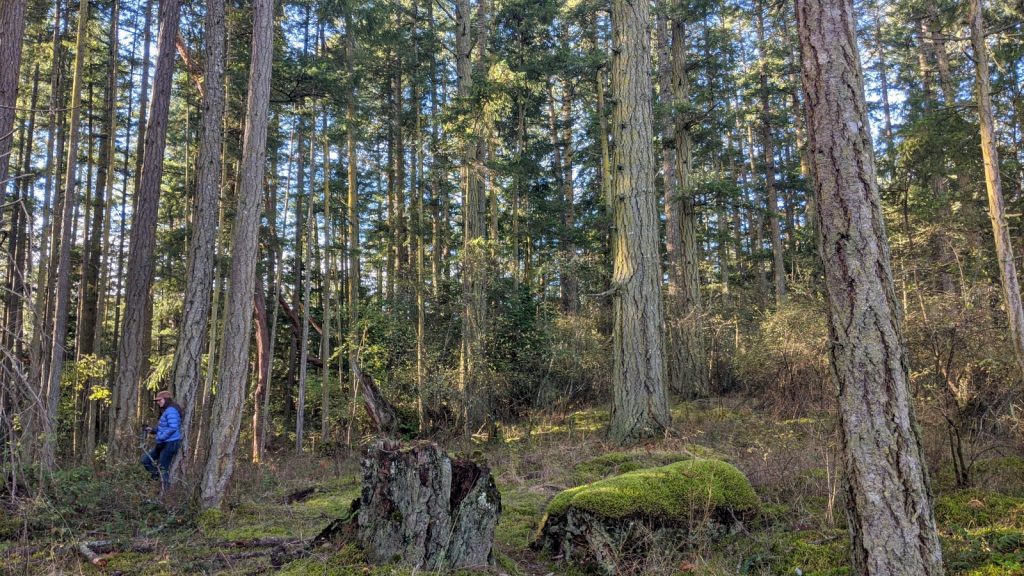 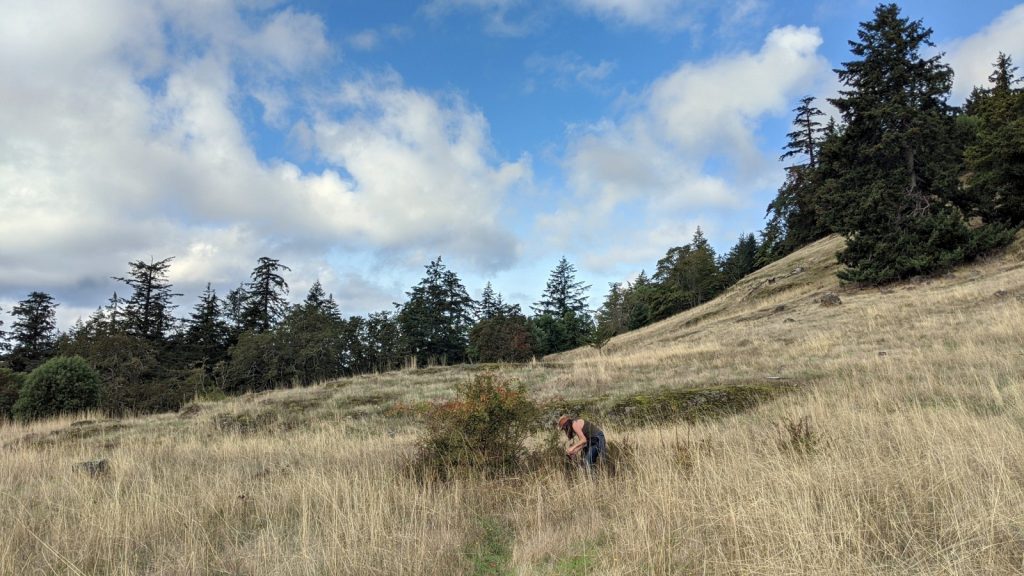 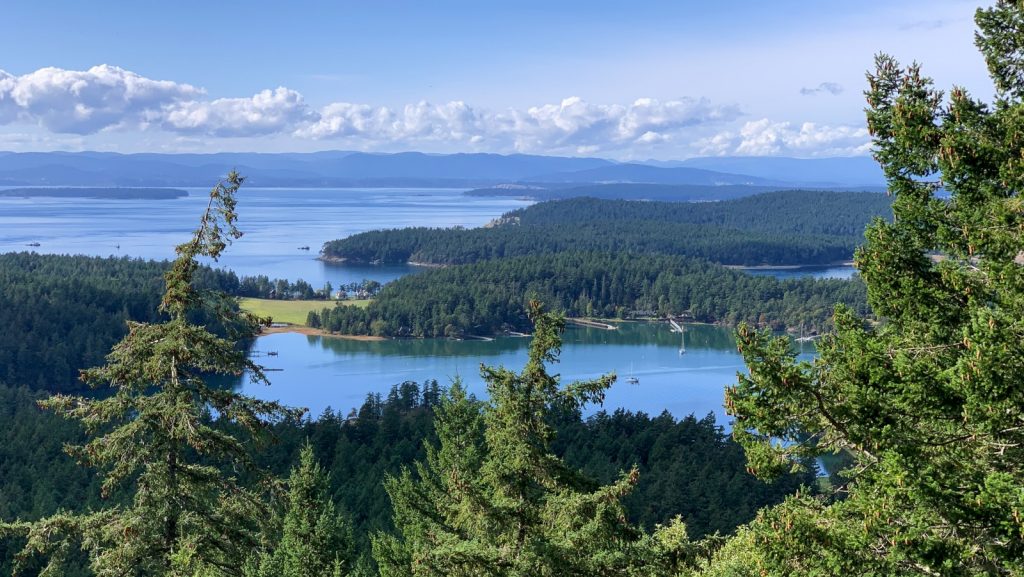 By mid week we had a gale glaring at us from the South. This would be our first time at anchor through one. With land surrounding the bay, we new we would be alright as the seas were not able to kick up much fetch is such a small body of water. The wind started at 2AM and by 3AM it was blowing in the 40 knots. With each gust, the 16-ton boat would heel over 20 degrees. One time causing all sorts of gear to tumble out of their secured areas and onto the sole. Sleep was no longer an option for me, so I roused to keep watch while Kerri got more sleep. The gale had her teeth in us and there was nothing to do but ride it out. Meriwether was dancing a proper jig. Her bow swinging back and forth 90 degrees on either side of the wind, each extension giving our anchor a proper yank. The gale tried everything she could, for the next 16 hours, to rip us out of the mud below and send us flailing down the bay, but failed. When Kerri got up to start her work day, I was able to get a few more hours of sleep. As long as one of us is on watch, the other can rest. It was uncomfortable as all heck, but worth the learning experience. We both agreed that for the next gale we would hunker down at a marina instead, like we did all of last year. We know we (as well as the boat and her anchor) can do it, but there is no good reason to do it unless forced upon us. 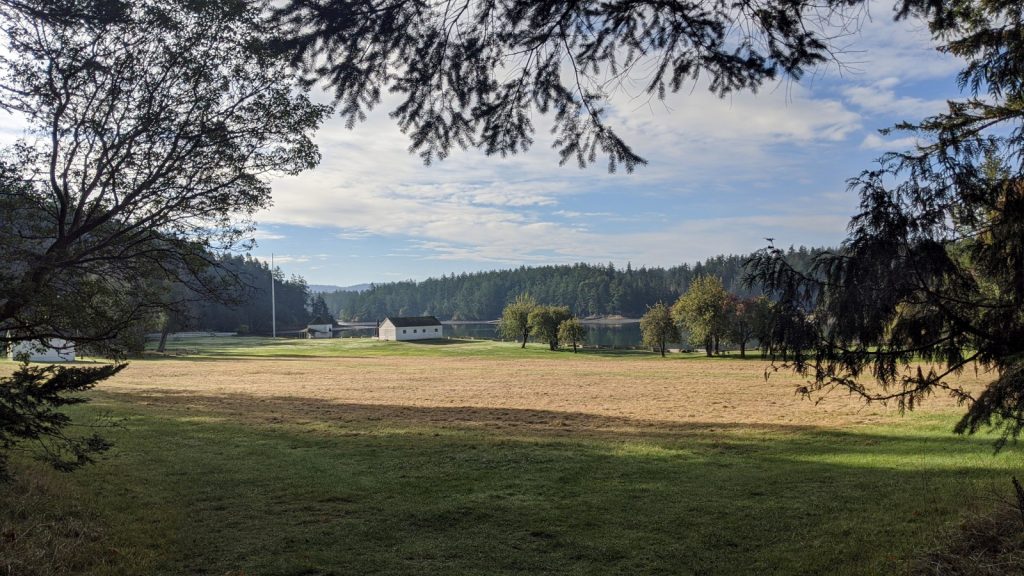 Once the weather settled, we got back to normal life for a few more days. Kerri finally dropped the crab trap in the water, fetching a couple crabs in just as many days. The whole boat stunk of the bottom feeders for a week, but she was happy to munch on the ugly beasts for days. 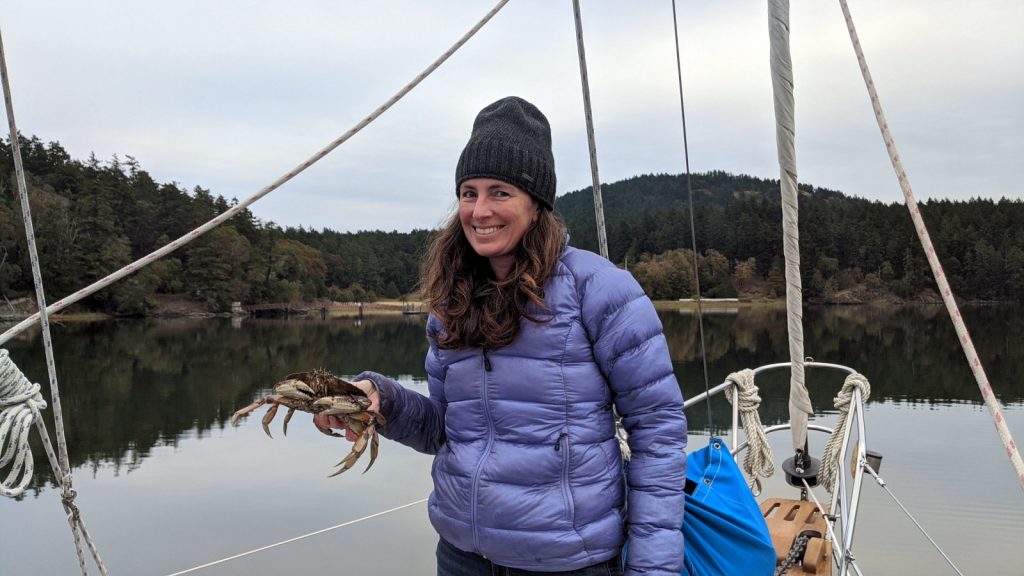 Towards the end of the week, we motored the short distance up to Roche Harbor for a night at dock to resupply the groceries, fill the water tanks, and get in a hot shower. I even had the bravery to put Meriwether into the slip ass first. A feat for sure, as she backs up like a rhinoceros. I actually missed the slip I was originally aiming for, instead taking up the slip two over. Only off by 50-60 feet… not bad for an old rhino, eh? Luckily, the place was empty so there was nothing [expensive] to hit. The maneuver was necessary to drop the dinghy on the dock for a proper wash while we had the chance. And it is always good to practice something rarely done.

Finally, a night at anchor just outside the marina with the local fisherman who spent much of their evening offloading their catch or filling the showers in the marina. We would sail out the following day in route to new adventures once again. 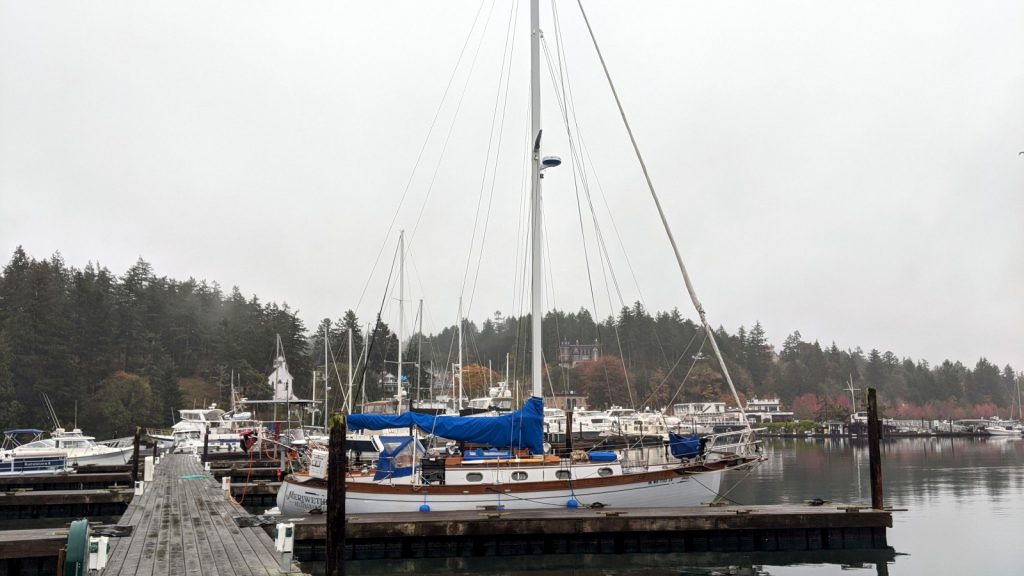 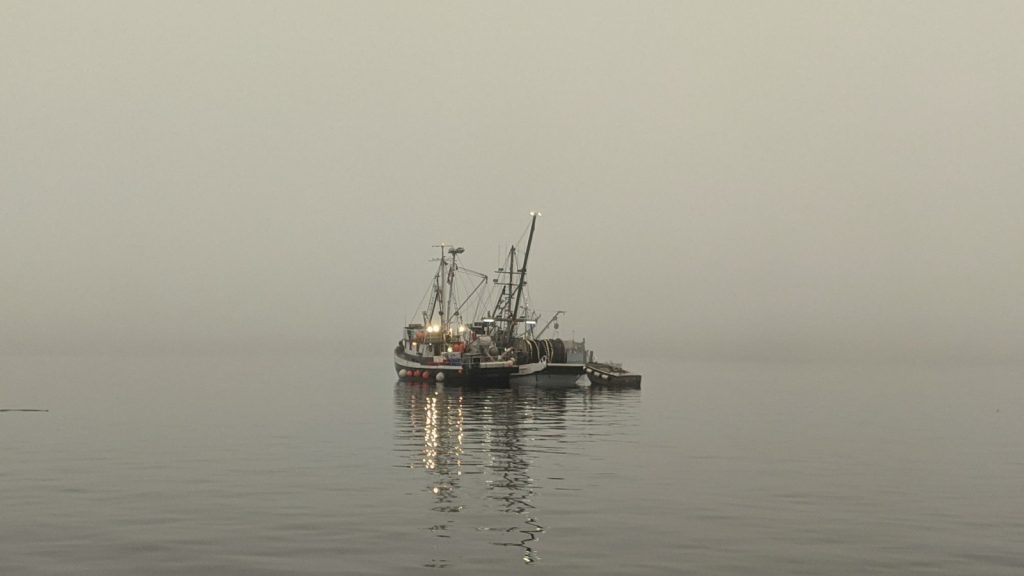