Getting half way north

There we were, not far out of Olympia, and nine days away from a scheduled haul-out in Port Townsend almost 90 nautical miles of sailing to our North. Twenty to thirty miles is the normal distance we travel each week. So, we had to put some proper miles in each of the five sailing days we had available and we were hoping the weather would play nice. No matter what, we had to be in PT by the following Monday morning.

Issue number one was getting back through the Tacoma Narrows. Timing is everything when going through a pass where the currents can run 5-plus  knots. Attempting it at the wrong time means we go no where, as our normal cruising speed is about 5 knots. Going through at the right time can mean we fly through at 8+ knots of speed over ground. So, the first few days all hinged on the tides through the pass, which ran in our favor on both Sunday and Monday mornings – early. Combined with a favorable wind on Monday (not so much on Sunday) we chose to pass through the Narrows on that day. But we were still more than 20 miles away, so we needed to get to an anchorage just outside the Narrows to take advantage of the early morning currents. This involved a few shorter evening sails. 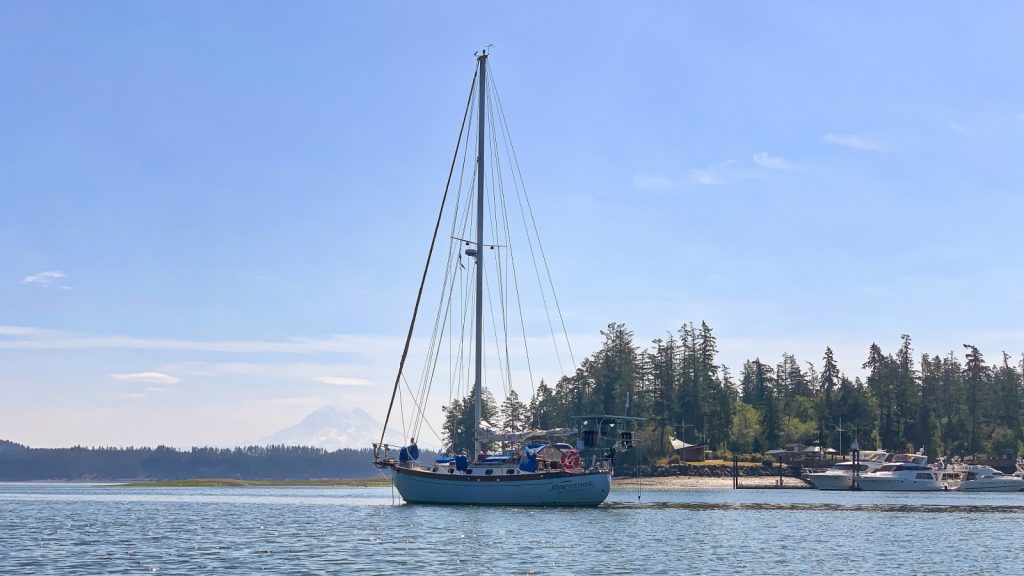 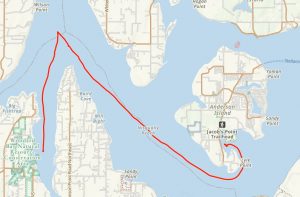 We waited until Saturday evening to leave Henderson Inlet and the conservation area, as both the current and a potential wind would run in our favor for a few hours later in the day. The wind lied, of course, and only gave us a little over a half hour of sailing before stranding us with many more miles to motor. Motoring is boring, and noisy, but it gets us there in a bind. Arriving to Oro Bay just after sunset we anchored in the mostly-dark, then set about polishing off a cocktail in the cockpit. It wasn’t until morning that we got off Meriwether to explore around the tiny anchorage finding an old abandoned ferry beached on the south side of the bay. On the lower deck was still parked two travel trailers, which appeared to be in very good shape. I’d have loved to go explore around on that thing. 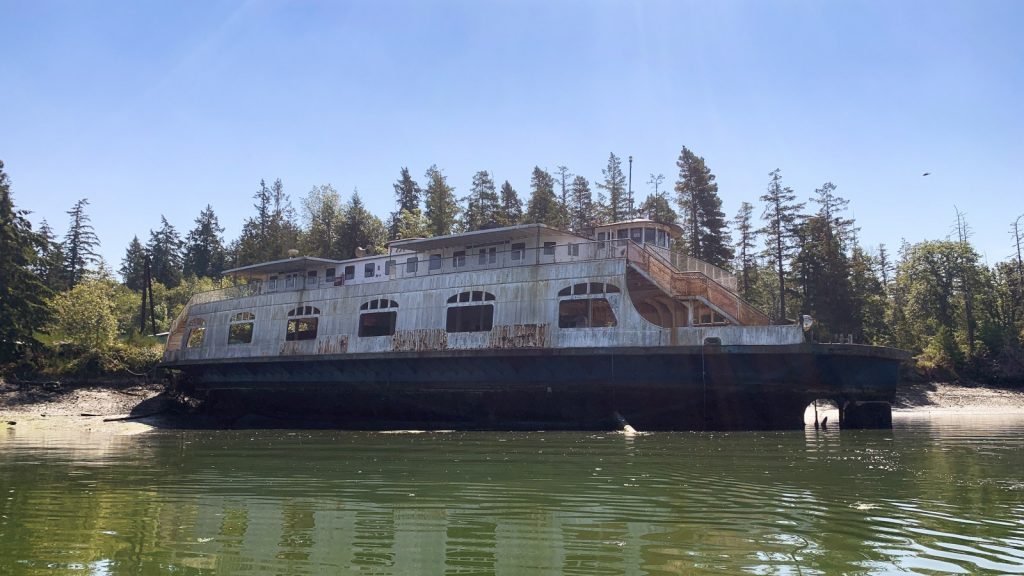 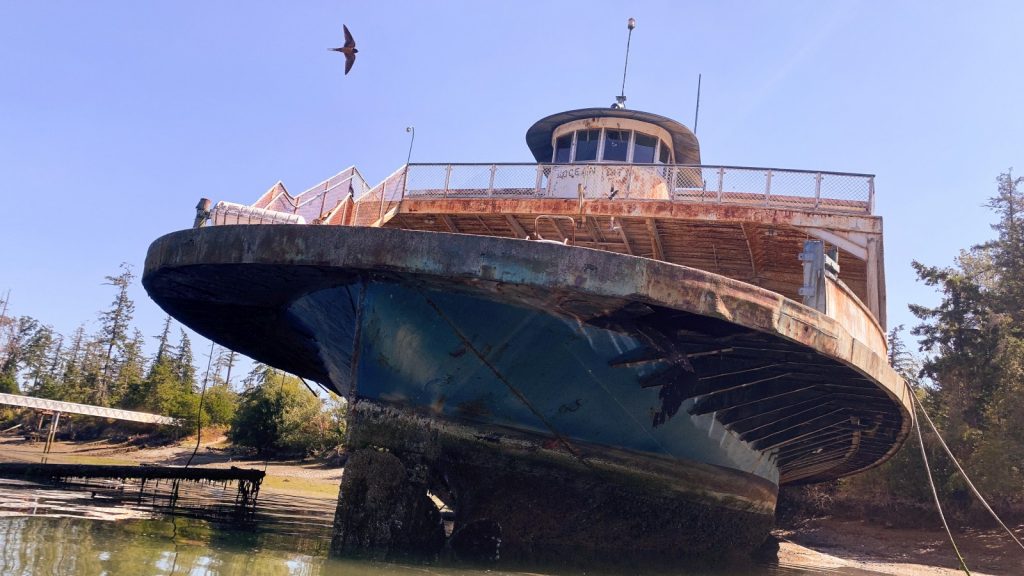 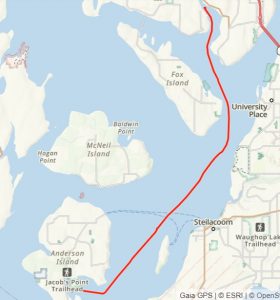 Next was the 11 nautical mile hop to Wollechet Bay, just outside the beginning of the Narrows. This would set us up nicely for an early morning run through the pass with an ebb tide. Again we waited until almost sunset to start the sail of the second day, again because of the current and wind predictions. We have been more and more willing to still be sailing further into and beyond the sunset lately. Multiple times we have arrived to our destination just as the sun finished setting, but before last light. This night was more of the same, arriving to an astonishing sunset and the local water-sports seekers just finishing up their day. We would only stay long enough to get some sleep, with a scheduled departure time of 7 AM in our future. 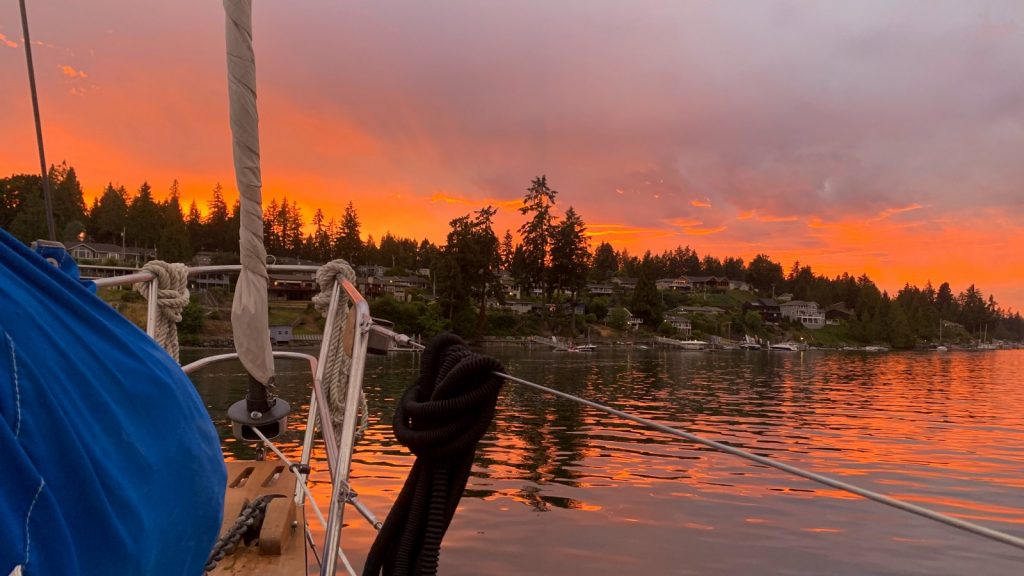 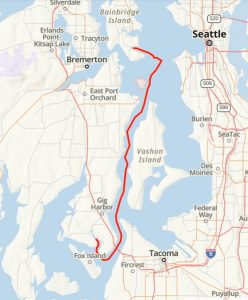 Monday, the final day of our weekend, we had to make some serious miles to get to our work-week destination of Blakely Harbor on Bainbridge Island. It was a 30 mile sail, which is an all day affair for us, and I suspected we would be motoring the majority of it. The current would be pushing us north until noon-ish, but the wind was forecast to be light.

When the day started we had some nice wind, getting straight to the sailing at 7 o’clock in the morning. But, just as we approached the southern mouth of the Narrows, the wind would run off and hide again. At least it got us to the point that the current would do the rest of the job. The water would suck Meriwether right into and through the pass at over 5 knots of speed. We didn’t bother to turn the motor on as the water kept us at full cruising speed anyway.

As we exited the Narrows to the north we started getting hint of a small southerly breeze so deployed  our spinnaker (albeit at an enormous struggle) and set about the next five hours of spinnaker sailing up Colvos Passage and past Blake Island State Park. At that point the wind shifted enough for the spinnaker to be socked and the furled headsail put back to use. Although we were pretty darn close to our destination, and already put some serious hours of sailing in this day, we kept going as long as the wind would propel us. Upon arriving to Blakely Harbor we had sailed for seven hours in the day and motored for only 40 minutes, and somehow not taking any significant photos along the way. 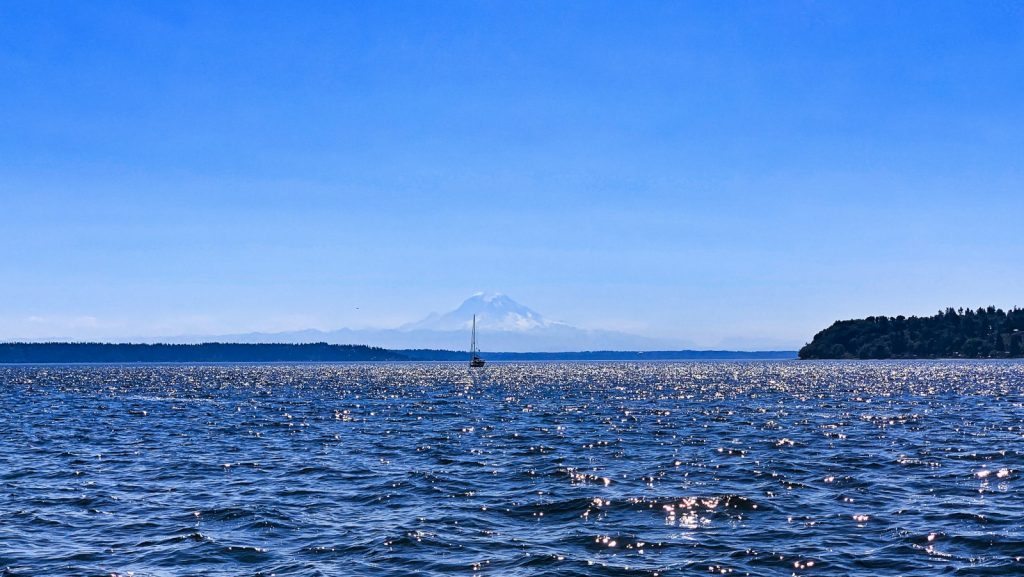 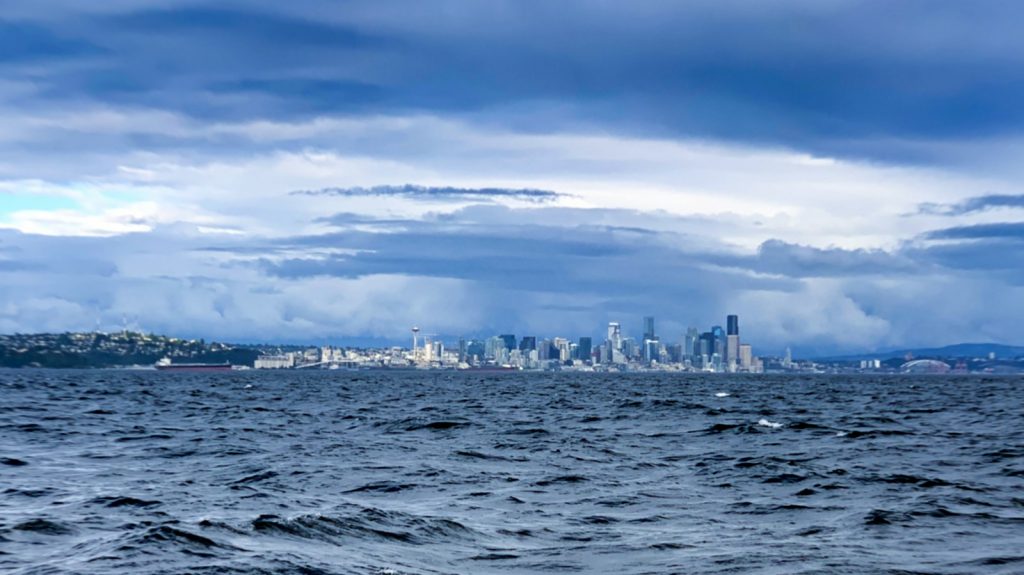