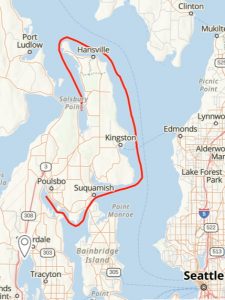 It took some convincing, but Kerri did eventually agree to leave Port Gamble and continue on to new adventures in the south Sound. Liberty Bay outside of Poulsbo was our destination. Liberty Bay is only 10 miles away as the crow flies, but the route to sail there is more than 30. And to make matters worse, the weekend – when we can travel such large distances – the wind was not going to play nice. Saturday was forecast with a good amount of wind, but coming from the South – the direction we need to go. Sunday and Monday had minimal wind in the forecast, with Sunday having a chance of some wind on our beam (side) for the longest leg of the route.  The hope was quickly extinguished, with no wind once we rounded Fouldweather Bluff. Other boats had their sails up trying to sail, but all were stalled in place.  Six straight hours of hearing the motor rumbling away isn’t how we want to sail, especially considering our resume had just crossed over to more sailing hours than motoring hours after our most recent sails.

Leaving Hood Canal Bridge behind at the start of our day

The Seattle skyline would appear about mid way in the route.

As we closed in on our final few miles, we passed through Agate Pass and under the 70 year old and aptly named Agate Pass Bridge with no drama to speak of. From there it was a slow crawl, against a mild current, around Keyport and into Liberty Bay where the wind promptly picked up to 15 knots for our final mile of the thirty-something, and the act of anchoring of course. Whatever wind… whatever! 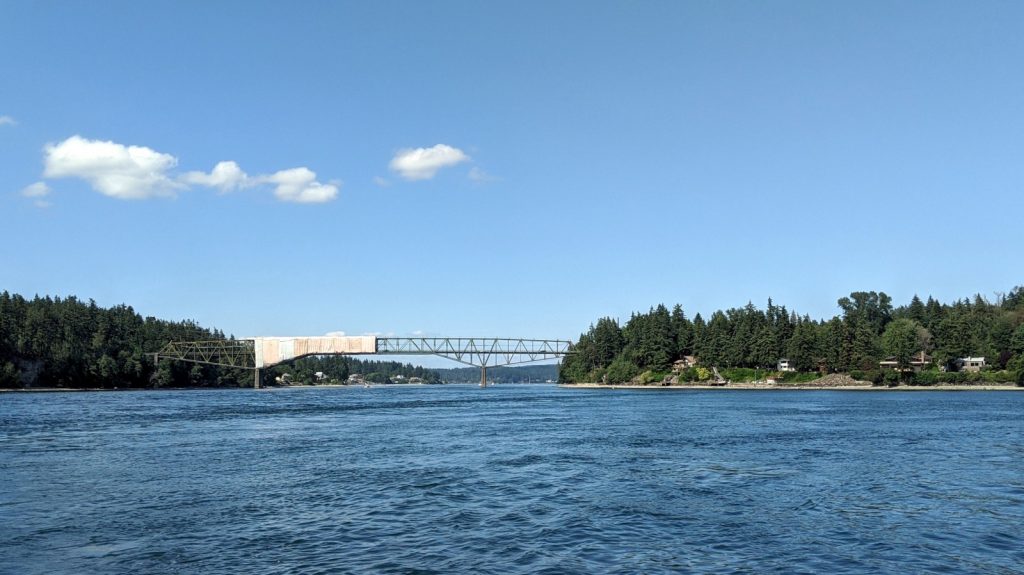 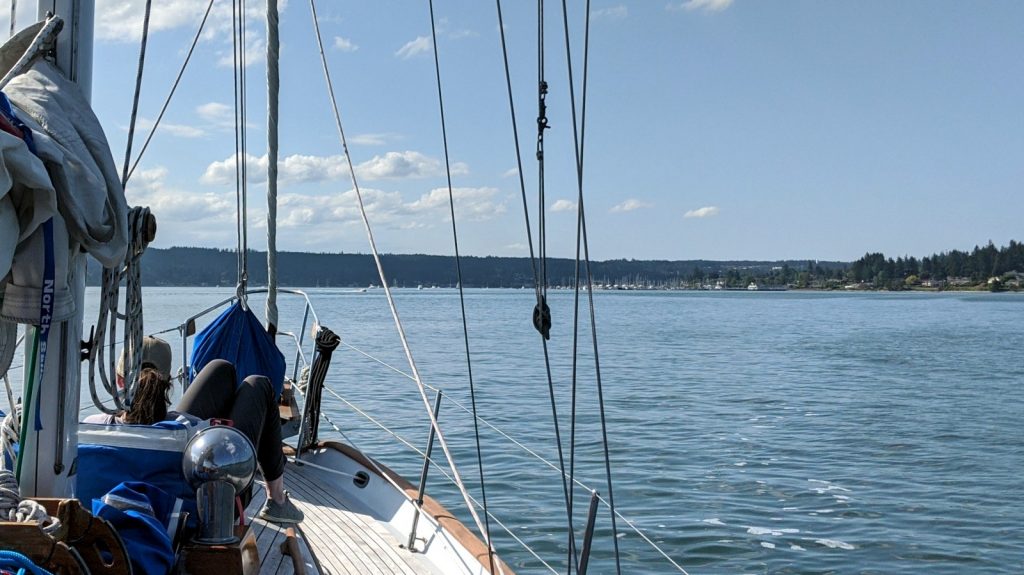 The following day we made a quick – all day – run to the market to buy a measly $700 worth of groceries and booze – ugh. It isn’t that we are consuming that much groceries (or booze), but we are still stockpiling a lot of foods to ensure we can survive weeks away from land at a time. And, since I am finally beginning to accept that the chances of crossing the Canadian border this year is slim-to-none, I have not resisted Kerri’s urge to restock the bar-slash-ballast, which she had not done in months.

Liberty Bay and the small town of Pulsbo ended up being quite nice. The bay itself is large enough for dozens of other boats to be anchored out with us. Some for extended periods, and others just for a night or two. The amount of boats would fluctuate each day but it never got any more crowded than the day we arrived, which wasn’t bad either. We did get a sail-by from this beauty which – my guess – is a chartered yacht with paid clients returning to port after a day on the water. We watched them tack their way up wind over the course of a half-hour, even through the crowd of anchored boats. Some seriously salty sailors there. 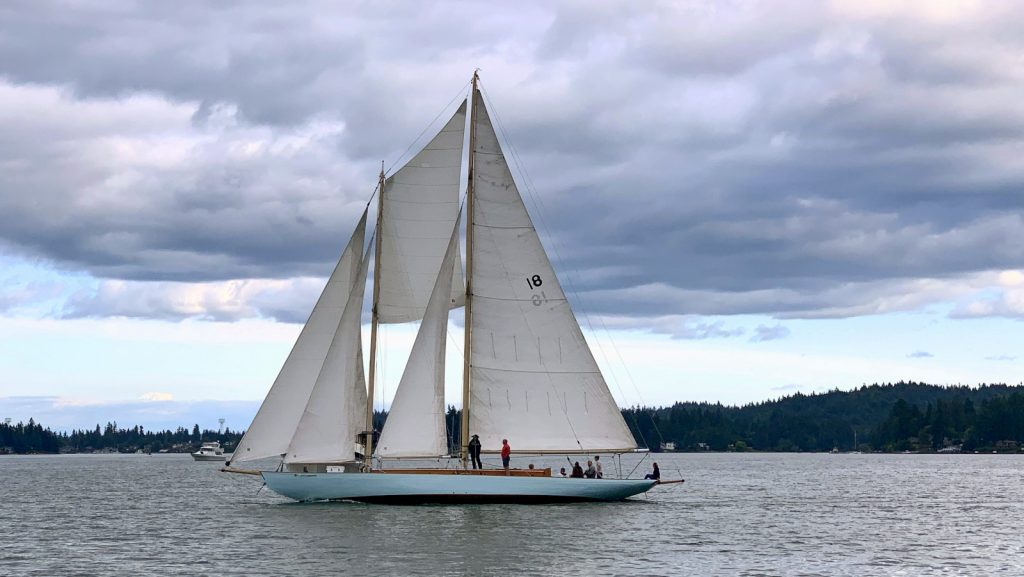 Not much went on during the work week, but I did take the opportunity to get in the water to clean Meriwether’s bottom and resolve our speedometer no longer working (again). We had just replaced the transducer with a brand new one before we left Bellingham, so when it stopped registering any speed during this last sail, I was not happy. I was hoping that it was just some growth caught up in the wheel. Equipped with my snorkel gear and wet suit I spent two hours flailing about in the cool waters; scraping the prop of all the stowaway barnacles, brushing the entire waterline of the slime and growth attached, and finally diving on the boat’s two transducers to clear them of any obstructions. This did resolve the speedometer issue, but I paid a hefty price in muscle pains that night after such a long swim. 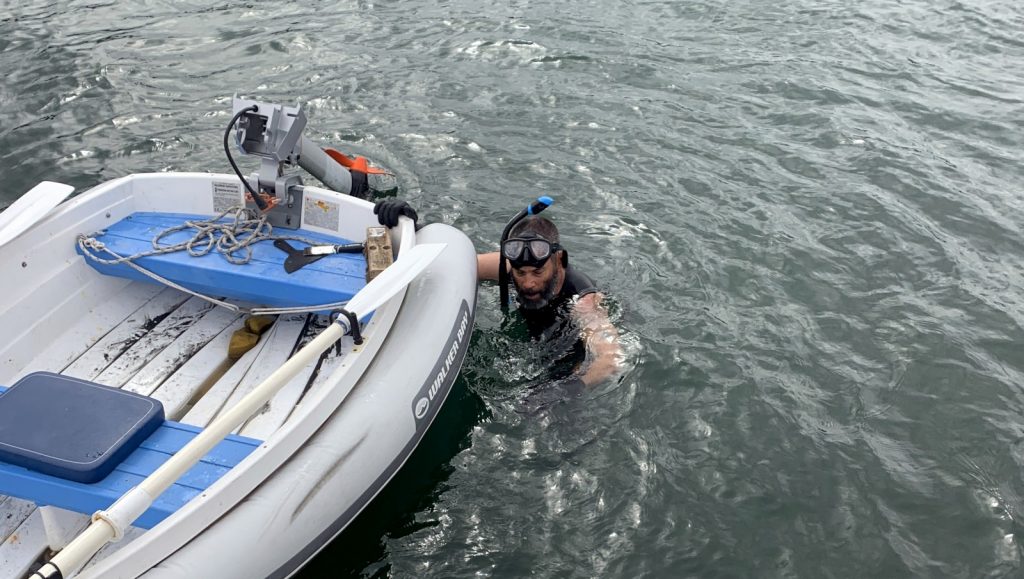