The second half north

There are times in which Kerri and I spend numerous days moving only between the bed and our respective workstations. Our work week spent at Blakely Harbor was one of those times. Thanks to the three days of sailing leading up, we were ready for a few days of limited physical activity and did so. With a view of Seattle just over our shoulder… or to our left … or in front – depending on which way the wind blew Meriwether’s stern – our work week came and went without much of anything else happening. 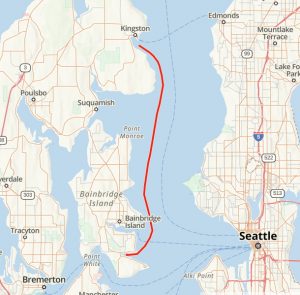 Our haul out was scheduled for Monday morning – first thing – so we had two sailing days to make the rest of the distance up to Port Townsend. That is more than enough time to make the 40-ish nautical miles, but we wanted to break it up into manageable chunks. Doing 30+ miles in a single day is quite tiring, especially here in the Sound where the wind rarely helps you get the place you want to go. So we set out on Friday evening, after Kerri’s work, to make the short hop to Appletree Cove just outside of Kingston, Washington.

The route was a simple, straight run north 13 nautical miles and we would even have some wind to push us along. Not much happened other than the sun dropping below the horizon. Meriwether’s tri-color lights were turned on in anger for their first time. Last light came and went and we slowly entered the anchorage well after darkness. It was our first night-sail (although only about an hour of it) and it was pretty damn sweet. We have been talking about dipping our toes into some night time sailing so here we were, entering an anchorage with little to no light. 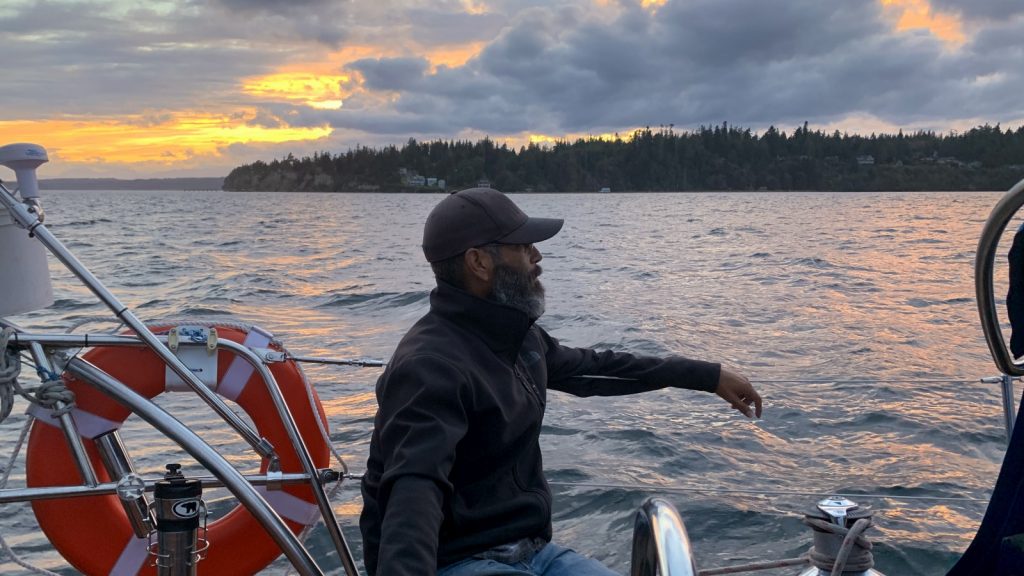 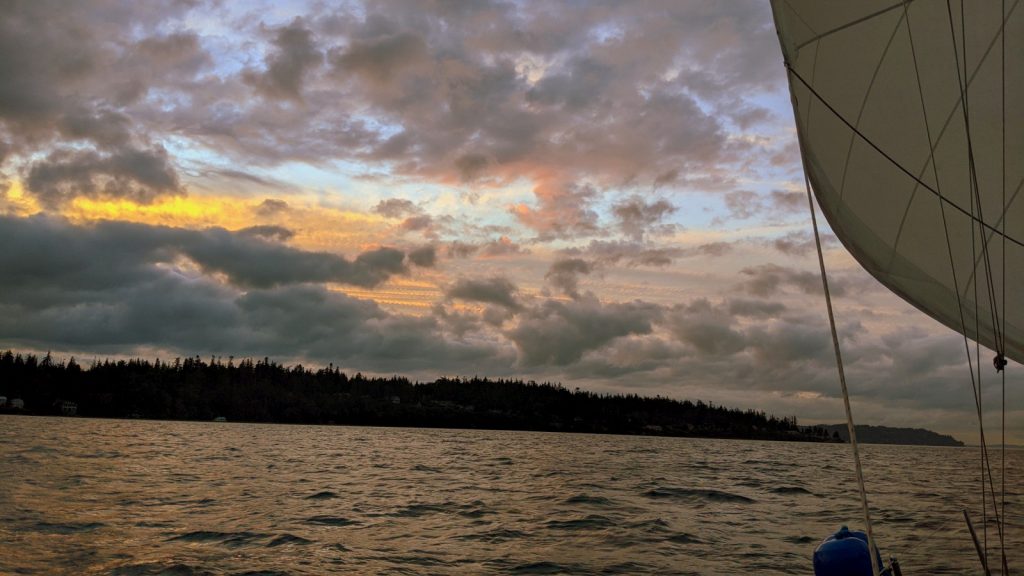 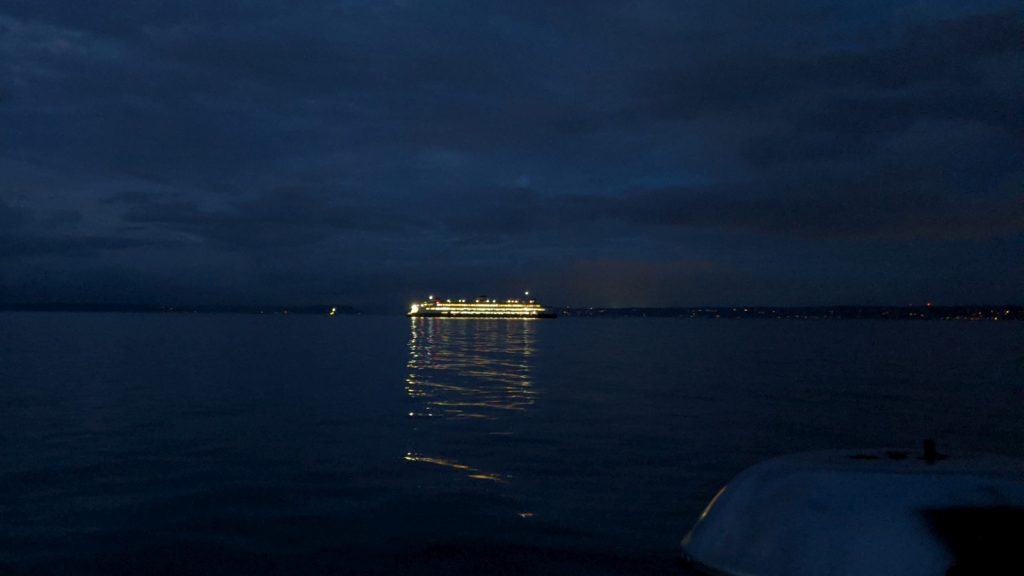 We anchored in the area we saw a few other boats (thanks to their anchor lights) with more than enough distance between us and them, or so we thought. Within an hour, as we were enjoying the evening up in the cockpit, I had notice the boat on our port was getting closer. I knew we were not dragging anchor as we would have had to move forward and to the left to have gotten closer. On the other hand, if that boat was dragging, it would go backward – towards us. Within a few more minutes it was confirmed; the boat I gave at least a 150 foot gap was now within a few dozen and getting closer. We hauled up our anchor, now at nearly midnight, and moved Meriwether out of danger. Afterwards, looking back through the darkness, we could see that the boat moved right past where we anchored, past another boat, and eventually stopped moving. It had moved from 150+ feet in front of us to 200+ feet behind where we had just moved from. What it is with people’s boats trying to drag anchor into Meriwether this year? 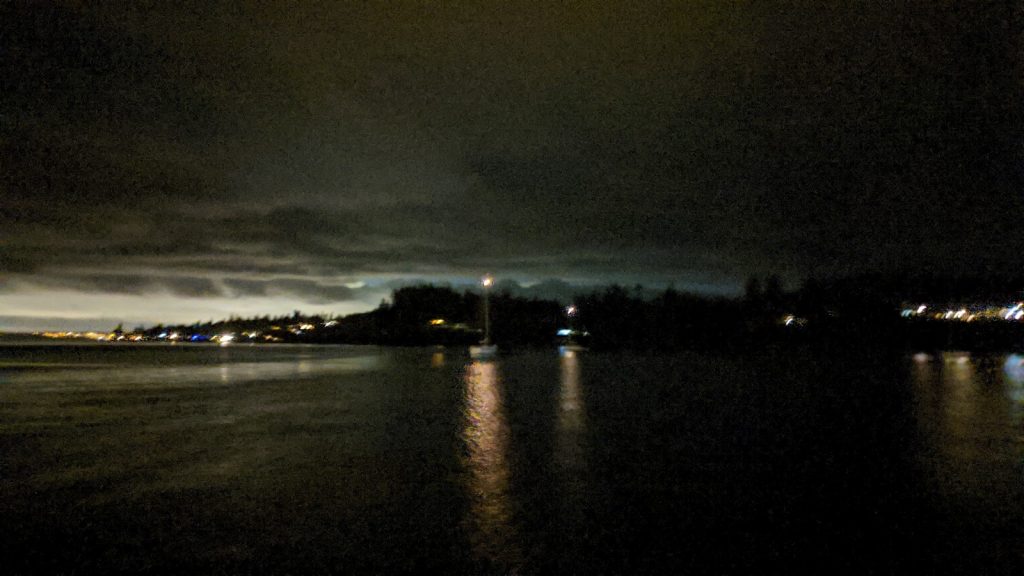 The boat front-center started well off frame-right but drifted past our anchoring spot and towards the other boat behind. 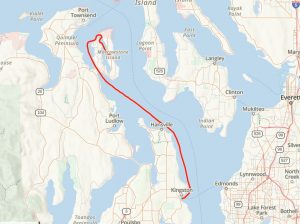 We got moving early the following morning to do a long day of motoring. Wind was not on the schedule at all for the day. We knew it wold be a mooring slog, but the current would be in our favor the first half of the day, adding just that little bit more speed to our travels. The only thing of note during the trip was the amount of flotsam to avoid. While Kerri was down below getting more work done, I was up top trying my best to keep my eyes open to avoid all the large logs along our route.

In the end, things progressed so nicely that we decided to pass our scheduled stopping location and just make the following days trip that much shorter by motoring all the way to Fort Flaggler State Park, just across the bay from Port Townsend. Along the way we went back through the Port Townsend Canal, under the bridge one ore time, around Indian Island Naval Magazine where a submarine was in for service, past a group of seals sunbathing and not practicing social distancing at all. It turned into a 27 mile sail – with not a sail in sight – to Mystery Bay because all the mooring balls were taken at Flaggler. 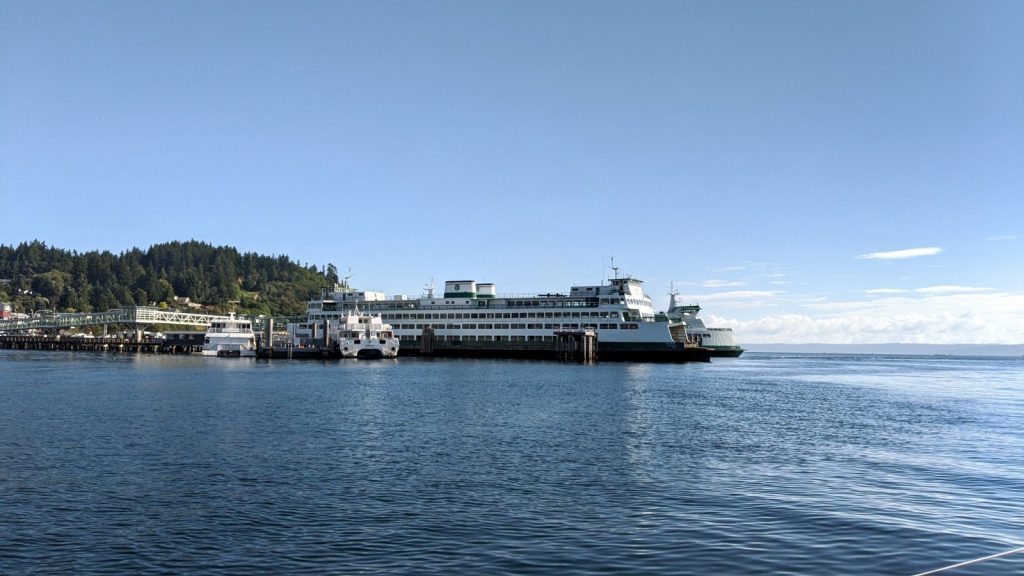 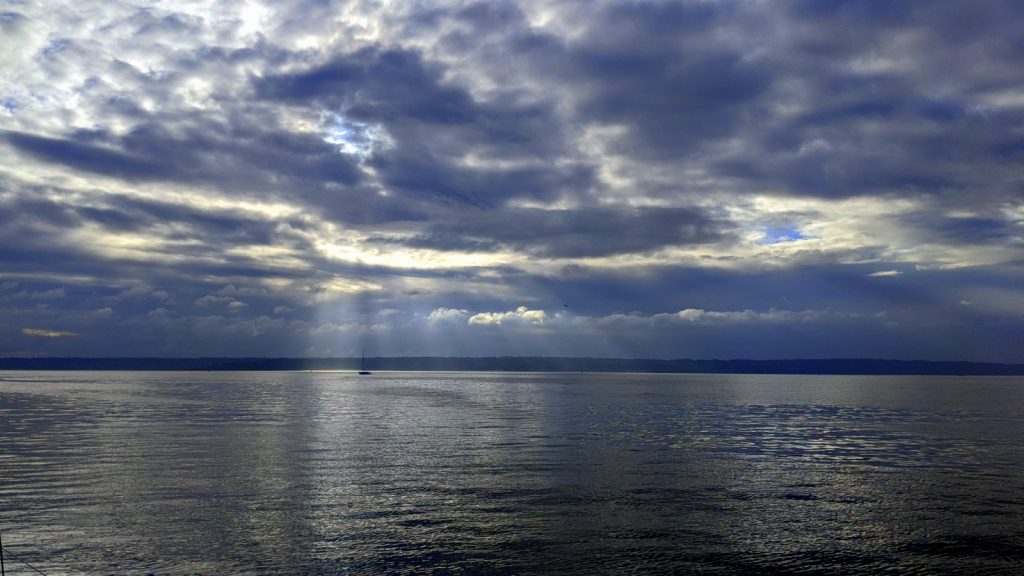 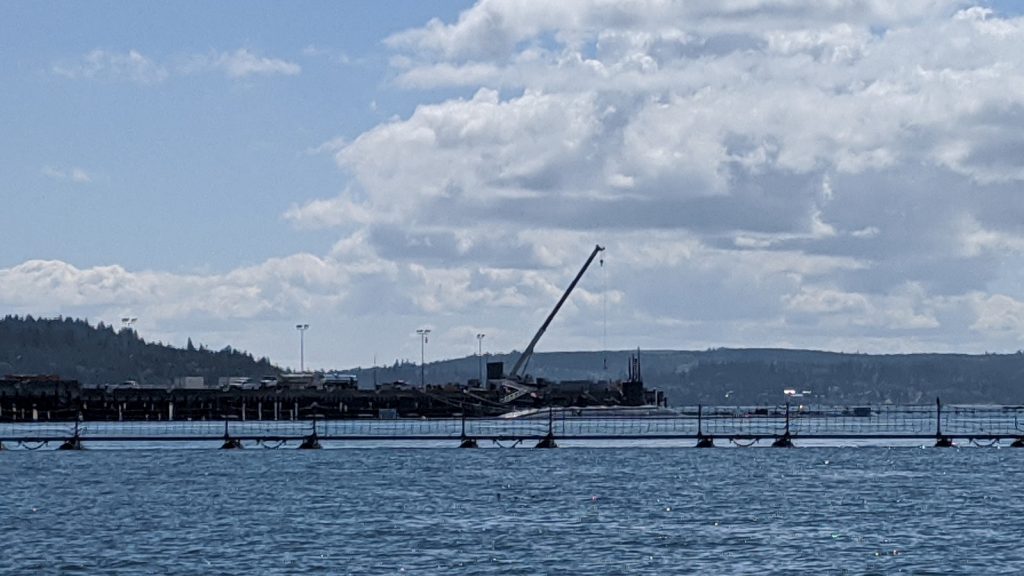 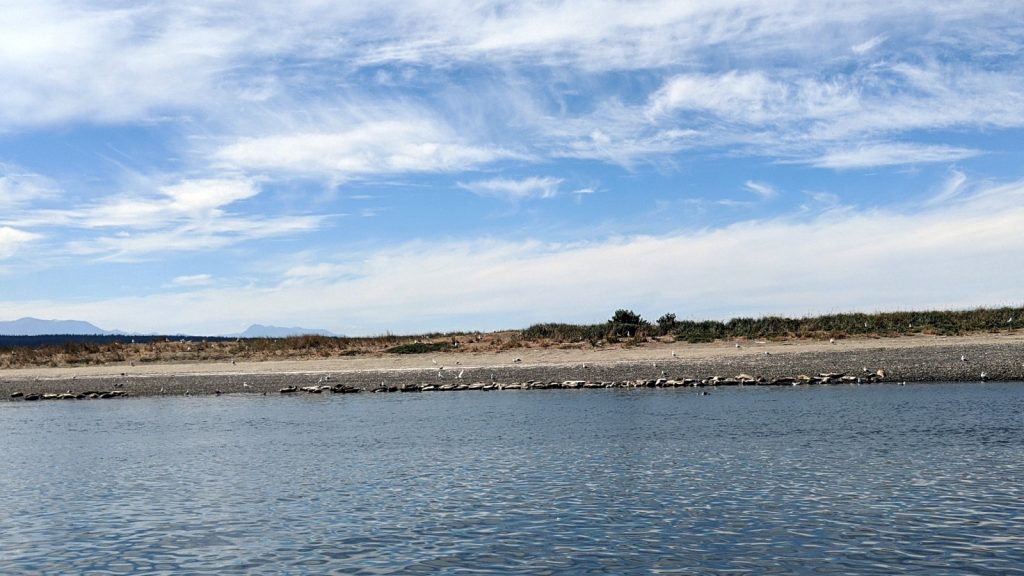 We were a full day ahead of schedule thanks to the Friday night sail and long day motoring on Saturday, so we just relaxed Sunday away, again without leaving the boat other than to register our use of a mooring ball at Mystery Bay State Park. Late in the afternoon we started the motor again and took the lazy route by motoring our way across the bay and into Port Townsend’s Boat Haven Marina where we pulled up to the staging area for the lifts and tied ourselves to the dock in anticipation for being hauled out the following morning. 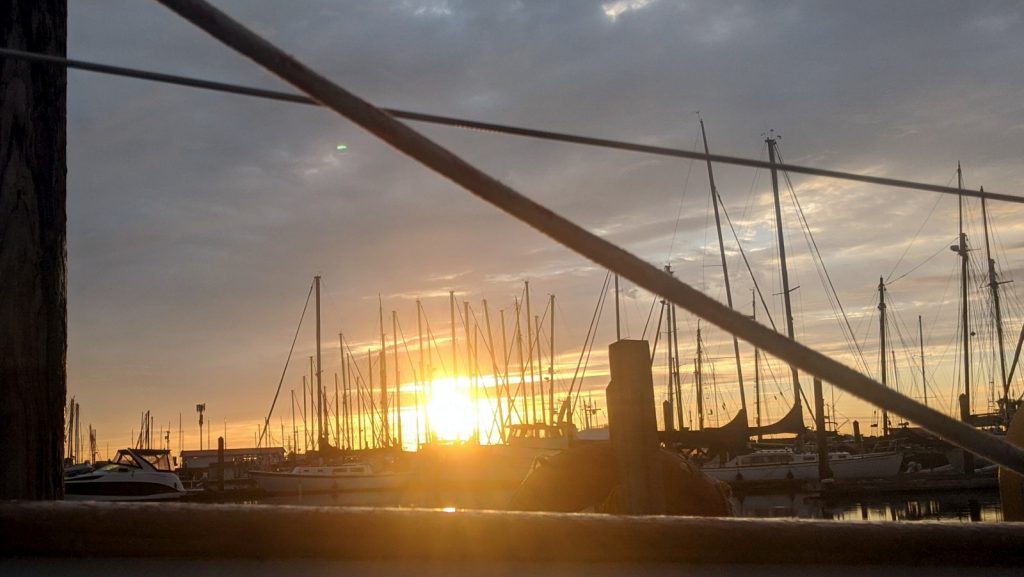 Meriwether’s sleepover buddy that night; Adventuress, the 100+ year old,  133 foot schooner who we docked directly behind. Adventuress spent a short time in Bellingham while we were there in 2019. Quite a drool-worthy sail boat. 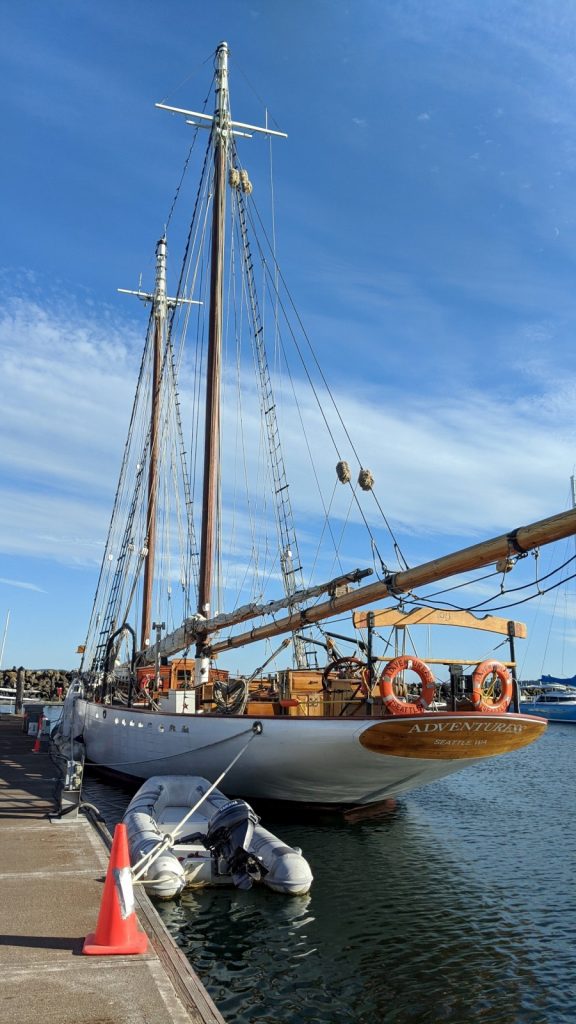