The big day has come and passed; the day in which Meriwether was hauled out of the water, placed on blocks, and we set about doing a full bottom paint while living “on the hard” in a shipyard. It is a once-every-few-years right of passage for full time sailors and I wasn’t looking forward to the amount of work it was going to take. The sheer amount of sanding, filling, and painting that is required to do the job made my muscles scream even before it all started. Yet after two weeks in the yard we are still alive and actually feeling quite accomplished to have done the deed ourselves. Now we can truly say we are full time sailors. 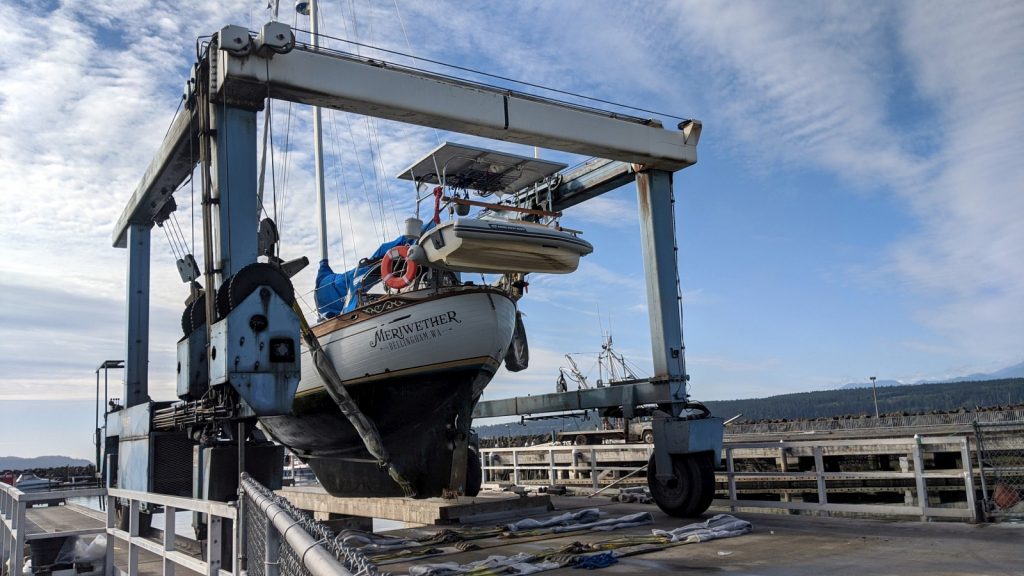 Meriwether being hauled out, weighing in at 32,000 pounds. The bottom is actually blue under all the sea life attached to the hull. 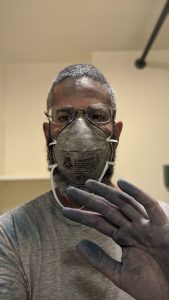 The days of sanding were the most tiring. Not because of how much sanding is required as much as that most of the work is done overhead, and the sander is not a light tool after a few minutes of use. One of the other yard works gave me some good advice mid way through the first day of sanding. He said, “When you start to feel the burn in your neck and shoulders, it is time to take a break.” It would have been great advice if he had offered it four hours earlier. The muscle burn has been there ever since, still a daily part of life nearing two weeks after the sanding was complete. Still, every hour or so I would come out from under Meriwether for a breather looking like a Smurf. It is hard and dirty work and not the type of labor this body is accustomed too. In my past years of employment I’ve always been the the one to delegate, not the one to actually do the labor. There were times that I questioned if this old body could pull it off. 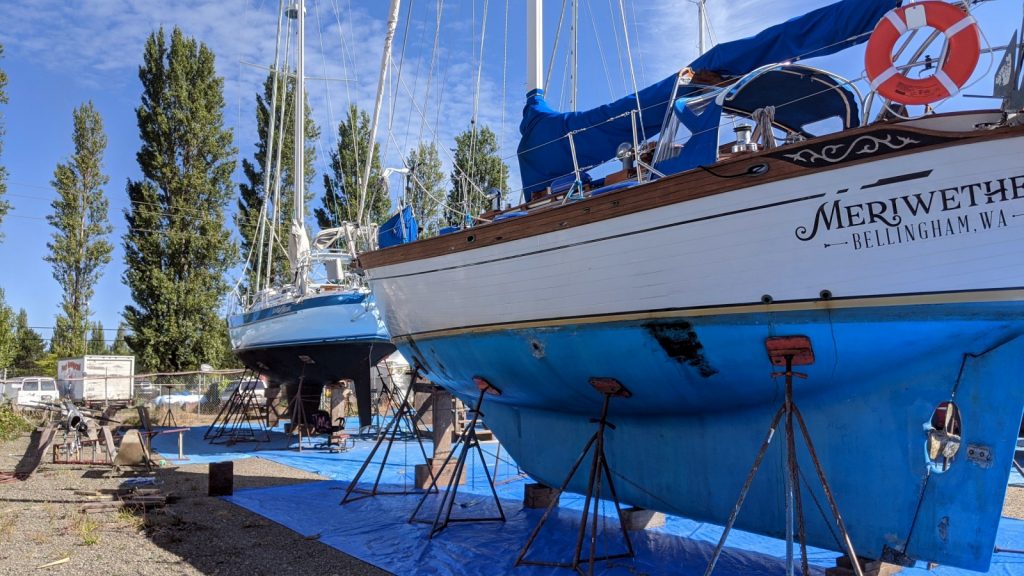 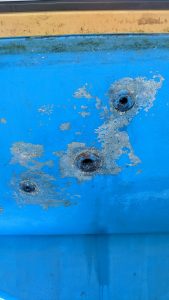 During the time that the sanding was happening, a yard worker was busy grinding out and filling in some of the boat’s thru-hulls (holes that go through the hull of the boat – some under the water line – usually to hold an electronic or plumbing pass through). With our whole toilet system and tank removed, and a new depth / speed transducer replacing the old model, we had four holes to fill in, and one being added. The net result of three less holes in the boat means there are three less failure points that could lead to Meriwether taking on water down the sea. I chose to leave the important fiberglass work to the professionals this time around, but I feel confident I can do it myself in the future if/when needed.

Two days of painting the bottom with anti-foul paint ensued. Anti foul attempts to keep marine life from growing on your boat and is heavily laden with copper to do said job. Barnacles and such have no taste for copper apparently. I’ve never tried it myself, so have no opinion on the matter. We went with the classic black paint over the original blue, knowing that the whole color scheme of the boat will change over the upcoming years anyway and black goes with anything. 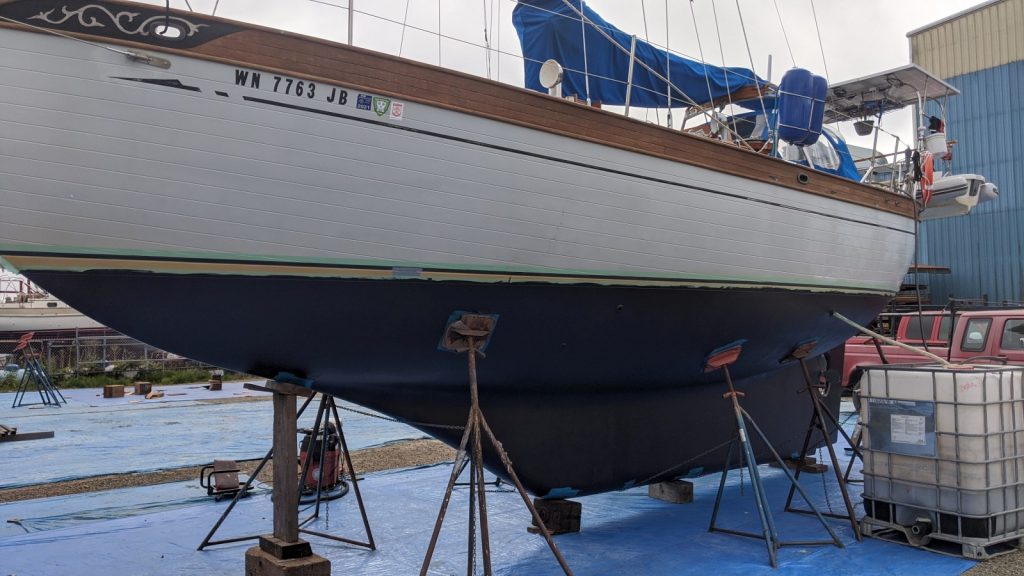 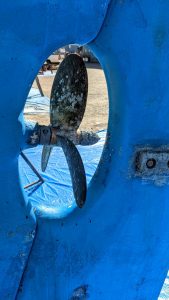 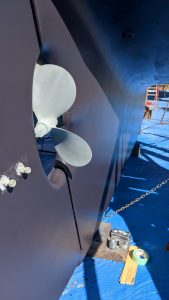 Even the propeller got a spa day to rid it of all the barnacles that would attach themselves to the untreated surface; scraping , sanding, and eventual anti foul paint application would make it right for a year or two, just in time for another haul out date. Barnacles on the prop meant I had to dive in the frigid Pacific North West water ever few months to scrape them away to retain the shape of the propeller. When too many barnacles were stowing away, the propeller was noticeably less efficient in the water, especially in reverse.

Of course, the zincs (sacrificial metals to prevent the important metals on the boat from corrosion) were replaced for good measure. 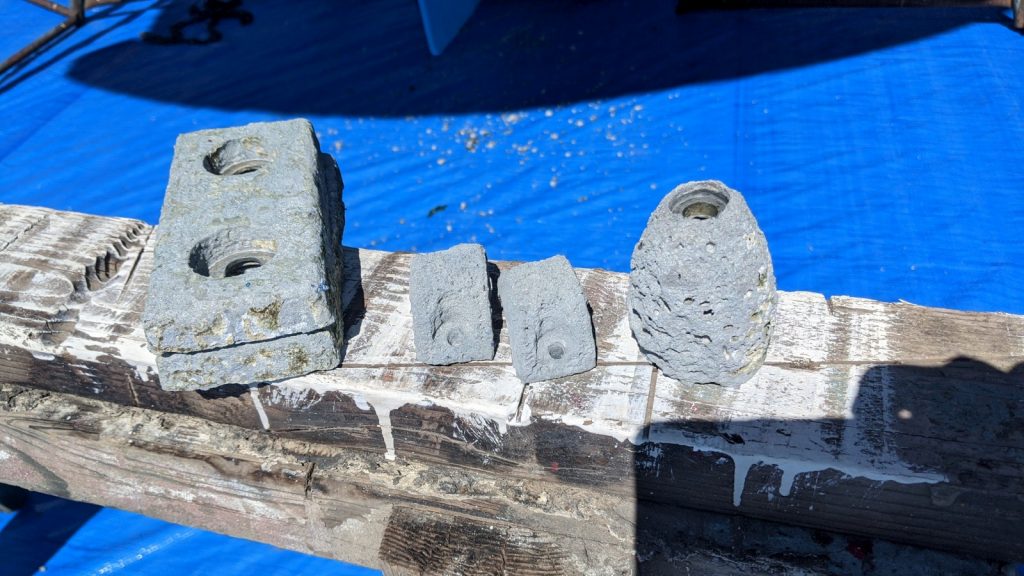 When the weekend arrived, Kerri was able to tackle some of the work load too. She took on the task of sanding and repainting the boot-stripe just above the water line, and decorative stripe higher up the side of the boat. Each different stripe (three in total) required a sanding, coat of paint, wait a day to dry, another sanding, another coat of paint, and another day to dry before the next one could be taped up and done as well. I much preferred the bottom painting as it did not require anywhere near as much time, or precision, to complete. 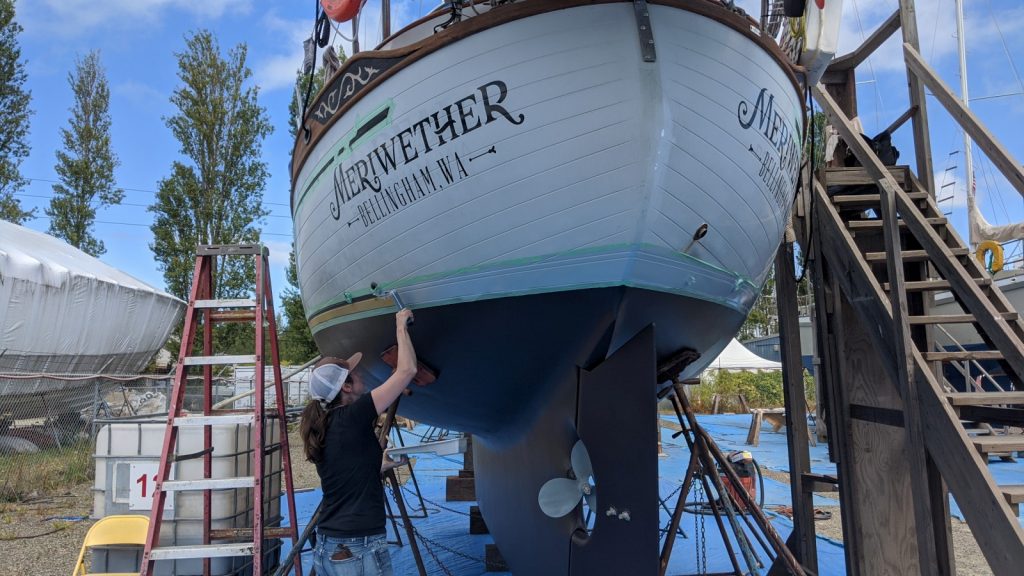 Our anchor would like to take little bites out of the gel-coat each time it was raised out of the water. This was doing a lot of damage to the bow of the boat, so something was needed to protect the boat. Luckily the unplanned project of ours was accepted by the metal worker at the shipyard resulting in a polished stainless steel bow-guard being fabricated from scratch and mounted in place a few days later. Meriwether has got some serious armor up there now! Of course, now I worry about that beautiful piece of stainless taking a beating from the anchor. 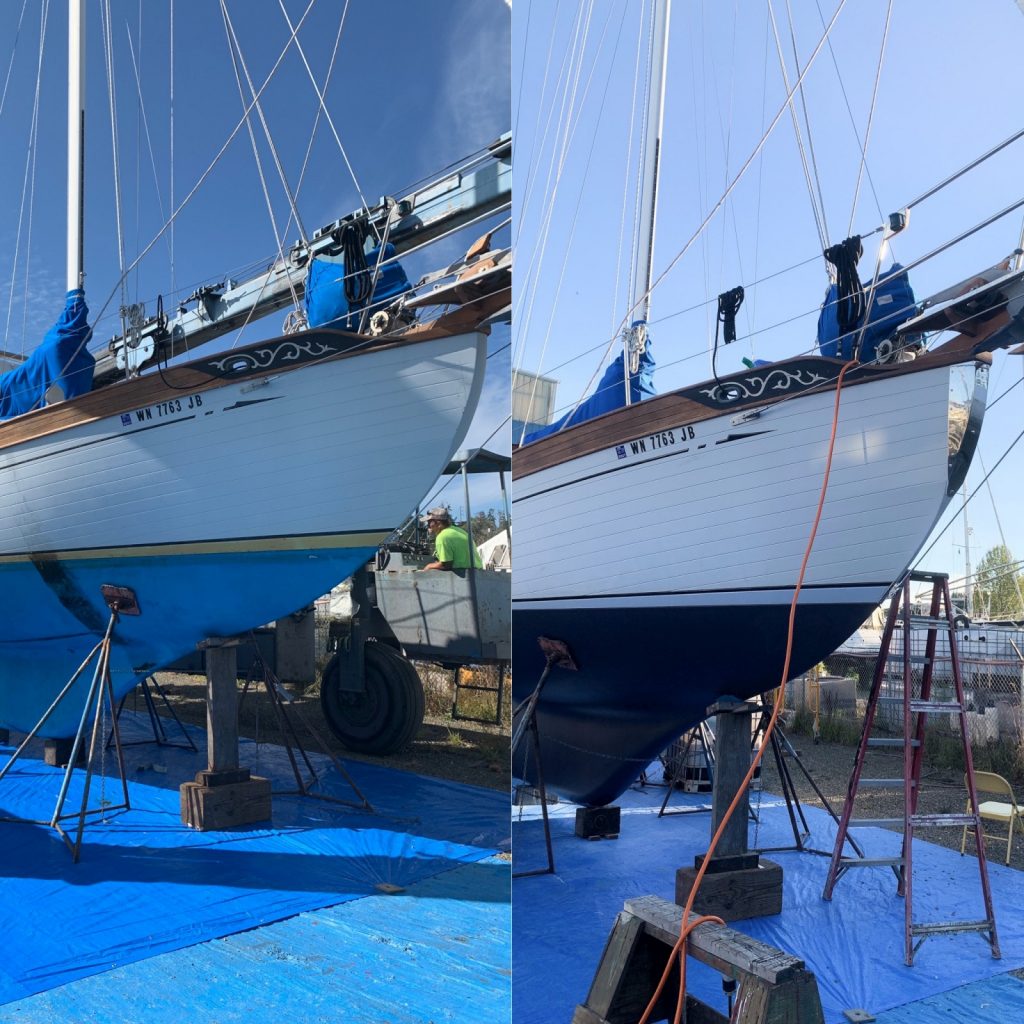 We could have gone back in the water at this point. However, we had no care to be in the water during Labor Day weekend anyway, and had a list of other tasks to conquer while we were on the hard. Under our V-birth has always needed a bit of attention, especially after the removal of the holding tank. We had purchased a gallon of bilge paint for this job some months back but hadn’t gotten to the task while at anchor, thankfully. It did require the removal – and placement elsewhere in the boat – of everything we have stored in the V-birth – which is a huge amount of gear, sails, parts, clothing, and more. We didn’t have a place to sit or lay during the entire multi-day project… until each night when we would make the bed, which is a ton of work by itself, only to be torn back up the next morning. In the end, however, is a clean (and easily cleaned again) area for all our storage needs. I then set about doing the exact same thing to storage areas under the galley and head sinks to use up the remainder of the paint. I’m so tired of painting at this point. 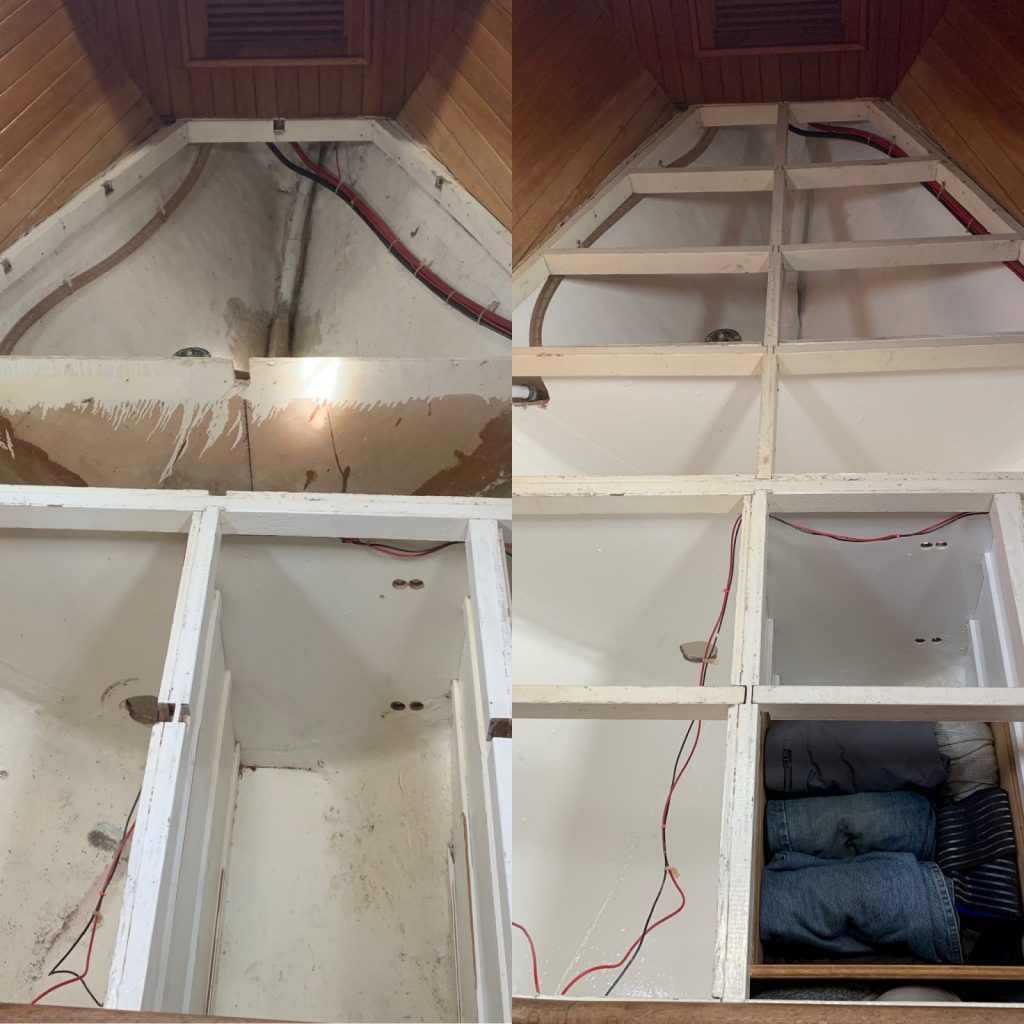 That’s me, working at 70 feet off the ground.

I intentionally saved one task until the final day – climbing the mast to install our new wind transducer. The old instruments had already been  replaced with newer models and the speed/depth/temp transducer was already in place under the boat in a new thru-hull that is easier to access then the prior locations. The wind anemometer still had to be placed at the top of the mast, requiring a climb… and my knees to get me up there. I’ve done it a few times in the past already, each time wiping me out for a couple days after – hence saving it for the final day in the yard. All went according to plan – as in I didn’t fall and die – and now we have a full suite of new instruments. This then allowed me to remove the old instrument box that was useless in the rain or spray and blocked some of our forward vision. And since the instruments were outside the cockpit, they were not visible when sitting down in the cockpit, so a relocation was planned as well. A very nice feature on these instruments is that they are solar powered and completely wireless. This means we can move them anywhere we want within the cockpit, and can even bring them down inside the boat to monitor things at anchor. We are always curious of the wind speeds while at anchor, so this will make it quite easy to see now. 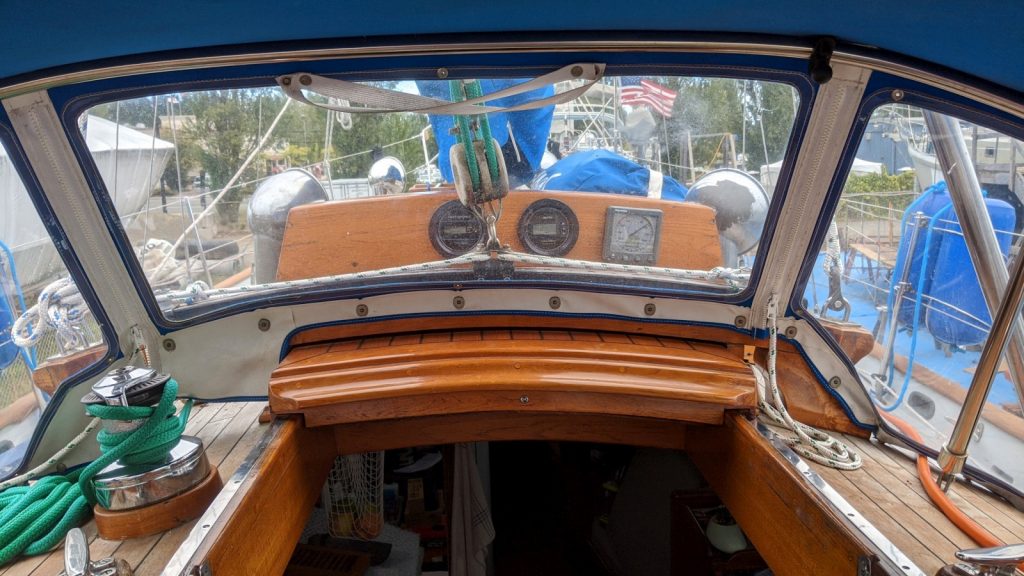 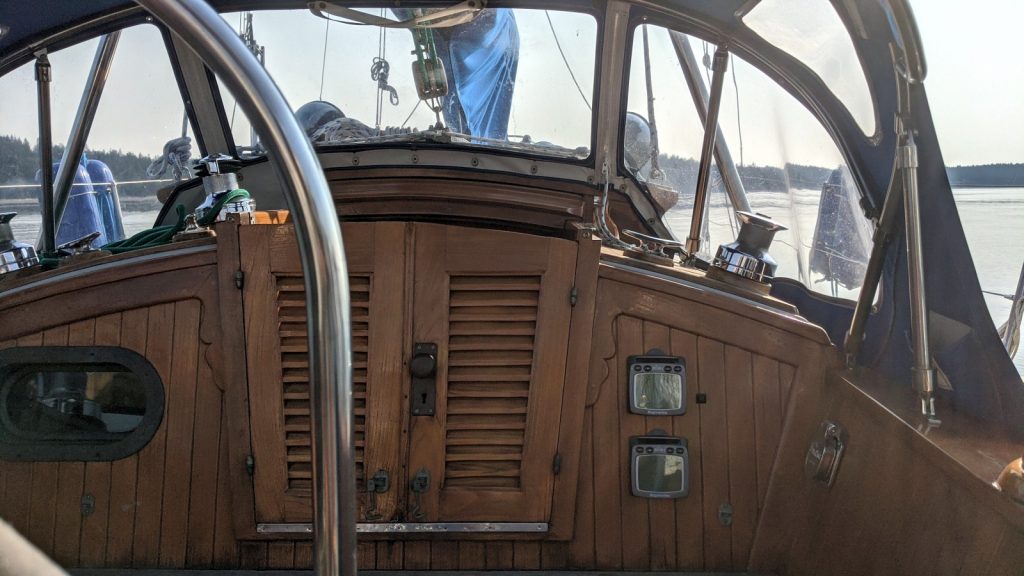 Finally, after 15 days on the hard, Meriwether was hoisted and carried to the ramp to be lowered back into the water where leaks were verified not to exist and we sailed out of the marina nearly immediately. While I did not find life on the hard as much of a pain as I thought before, it was definitely not what either Kerri or I want. It was hot, noisy, and dusty as all hell. Although, it did have easy access to tacos and popsicles, the later of which kept me alive the entire time. We even got to hang out with new-to-us-friends, Sean and Stephanie, who we met earlier in the year when they were caught gawking at our boat in Bellingham (I can’t blame them).  They have since purchased a Tayana 37 (sister boat to our Baba) and were in the yard fixing it up when I stumbled onto them. For those that like a walk through the past, t’was a Tayana 37 that we fell for two years ago and nearly bought, leading us to our Baba. 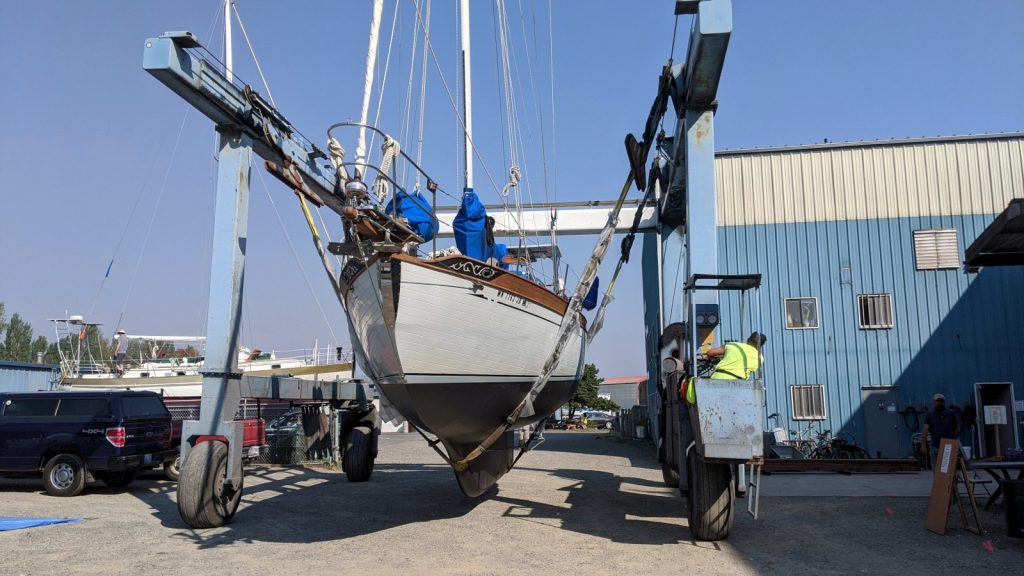