The morning we left Waldron Island I scanned the AIS for other boats on the islands to our North – where we planned to point Meriwether. Patos Island was the original destination, but I saw something on AIS that changed our minds; Merlin. Merlin is a like-aged boat to Meriwether that we happened to view back in 2018 when we were shopping. It was still moored in Bellingham during our two multi-month stays in the city and over those months I got a bit of a crush on Merlin. He was a good looking boat, and was still sitting there for sale more than a year and a half after we passed on it. And yet, here was Merlin – on our AIS – just a few miles away on Sucia Island. Kerri and I were both excited that Merlin was purchased, so set out to stalk the boat and it’s new owners. Sucia became our destination, but only for a few short hours. Before we could arrive, Merlin sailed back towards Bellingham. We missed our chance.

Instead, and thanks to some impending wind/weather in the following days, we chose to revisit Matia Island. The small cove there would keep us safe for the few days of southerly winds. With the dock was still in the water (they take them out before the freeze) and empty, we decided to take the easy way out and tie up for our few days. Kerri took the helm for her second time docking this year and nailed it. No drama or broken parts, she just plopped the boat right where it belonged. We hung around for a few days, occasionally hiking the trail on the island, before heading up to the next island over – Sucia. 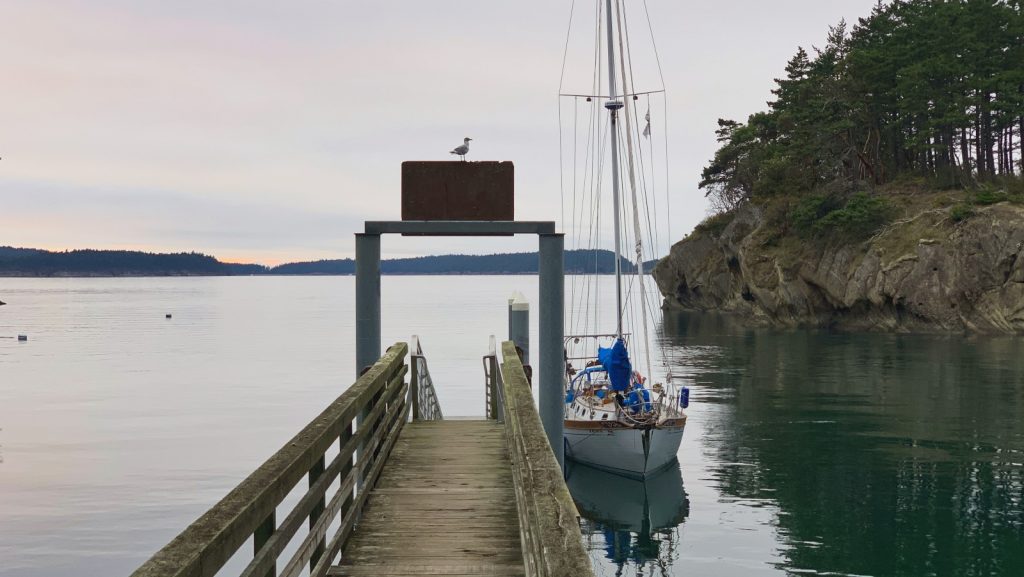 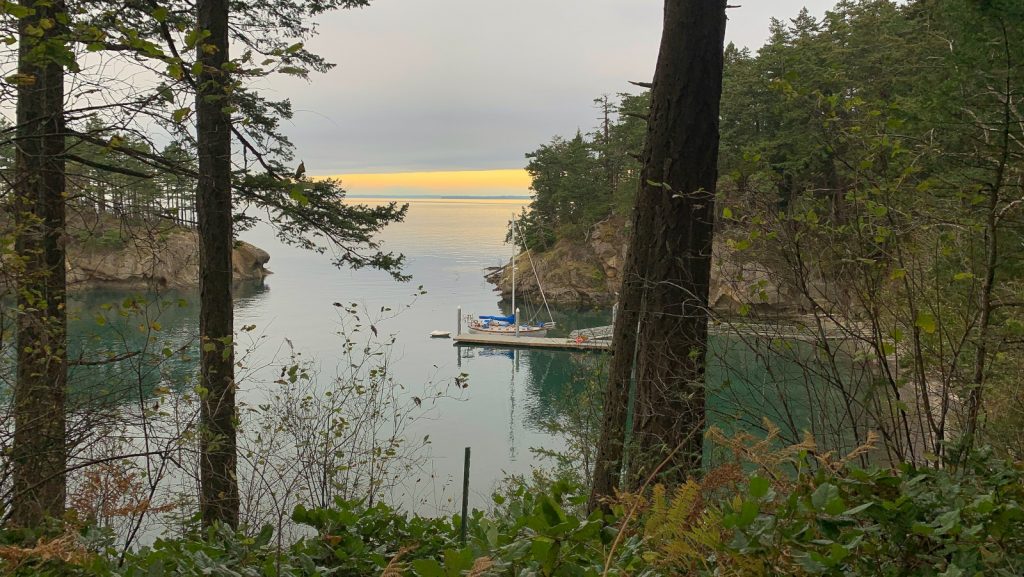 Once again, our pick of anchorage at Sucia was based on the wind the next day or two. With winds coming from the south we had but a single choice, Shallow Bay. Here we would anchor for a single night before relocating to Fossil Bay (new to us) to dodge the wind, now coming from the other direction and right into our anchorage. We motored out in heavy seas, enjoying the bumpy, splashing, ride underway. We both wish we had sailed it, but it was not worth raising the sails for the very short hop to Fossil Bay.

At Fossil we took up 40 feet of dock space once again. With getting to shore so easy, Kerri brought me on a mushroom hunting hike where we had the entire island to ourselves. Well, except for the dock. That same day a half dozen other boats would arrive – all ex-neighbors from the Bellingham marina – who were out to enjoy a fair weather weekend (aka party). No complaints from me, but it did offer the push we needed to untie the lines and move one more island over – to Patos! 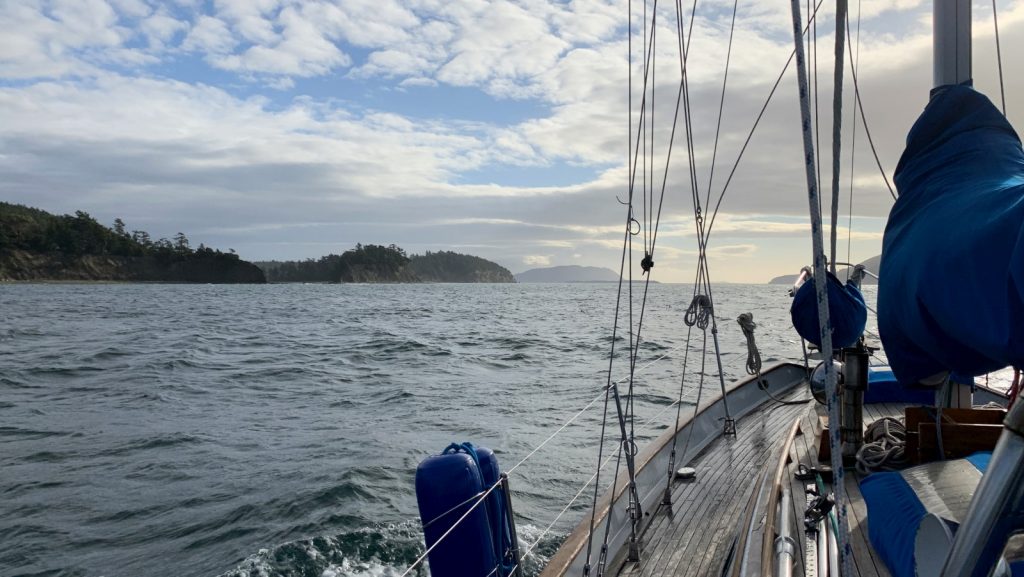 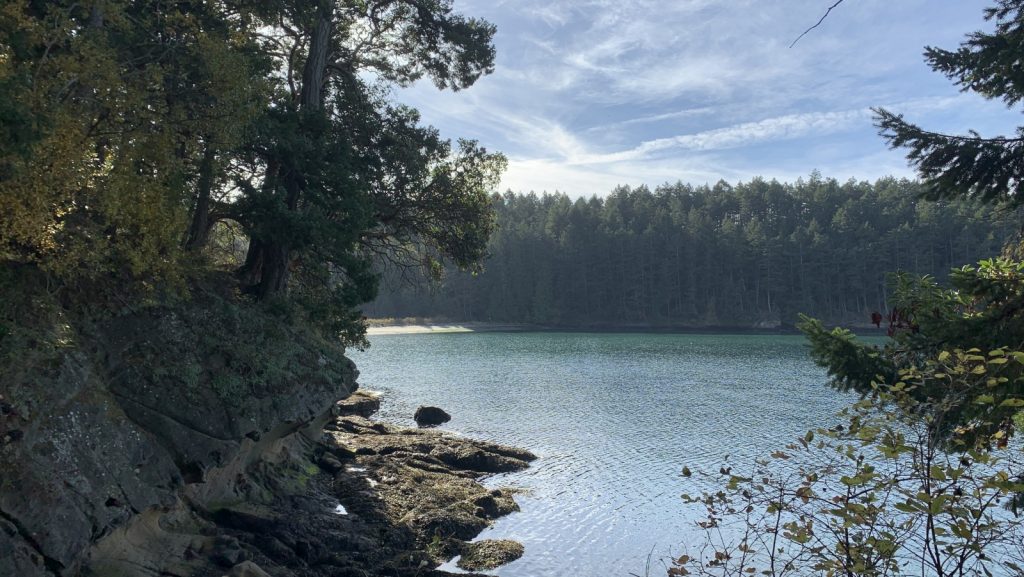 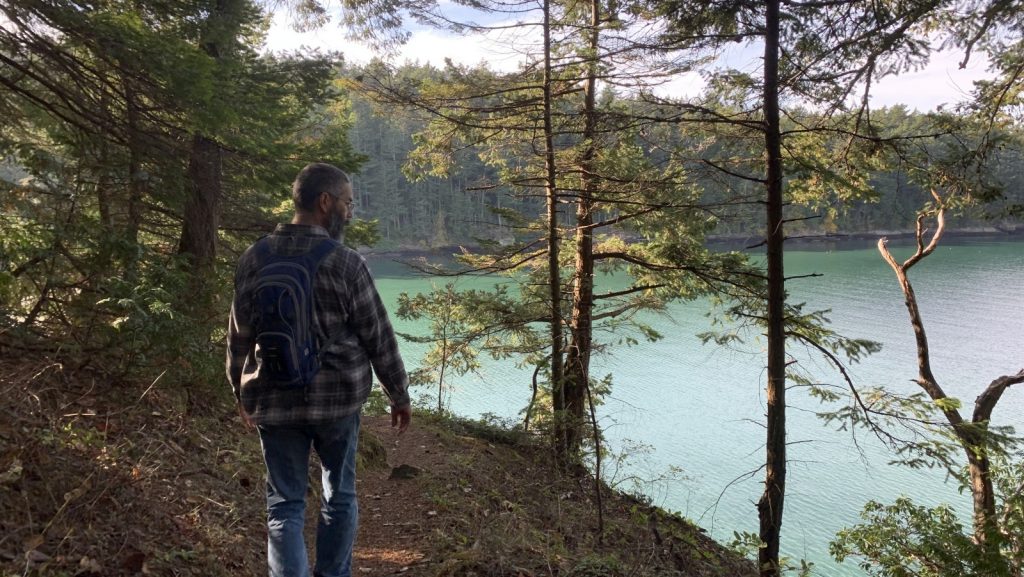 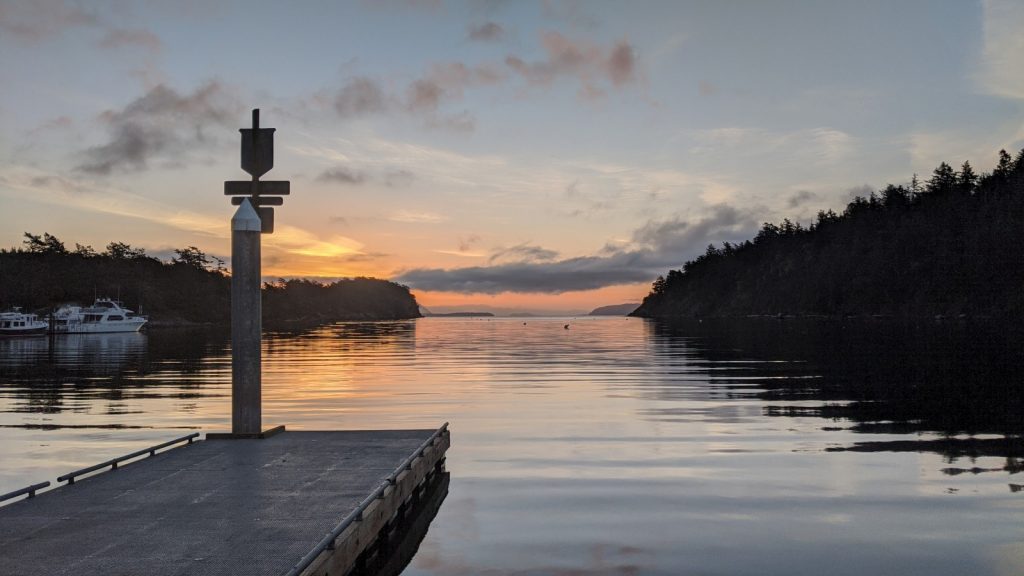 As we rounded the corner out of Fossil Bay and into the more-open-waters of the Puget Sound, there was wind! Not a lot, but enough to justify raising the sails. Wind was not in our forecast so we expected to motor the short few-mile hop to Patos, but with wind things get so much better. We slowly flanked Patos a few miles to her south, suffering through her own wind shadow for a while. Once we cleared the island the breeze picked up to a perfect 12-15 knots, and with full sails up Meriwether was having a time of it. Heck, we were even on a perfect tack to the lighthouse – our destination. It wasn’t a long or a difficult sail at all. Just a couple hours happily splashing through the chilly waters and we were done, but it felt good to sail for fun for a change. Our time at Patos, which consisted of only a single day and night, was spent hiking out to the lighthouse and to do a lap around the trail system. To keep things fresh we did it in reverse order to our last time here. 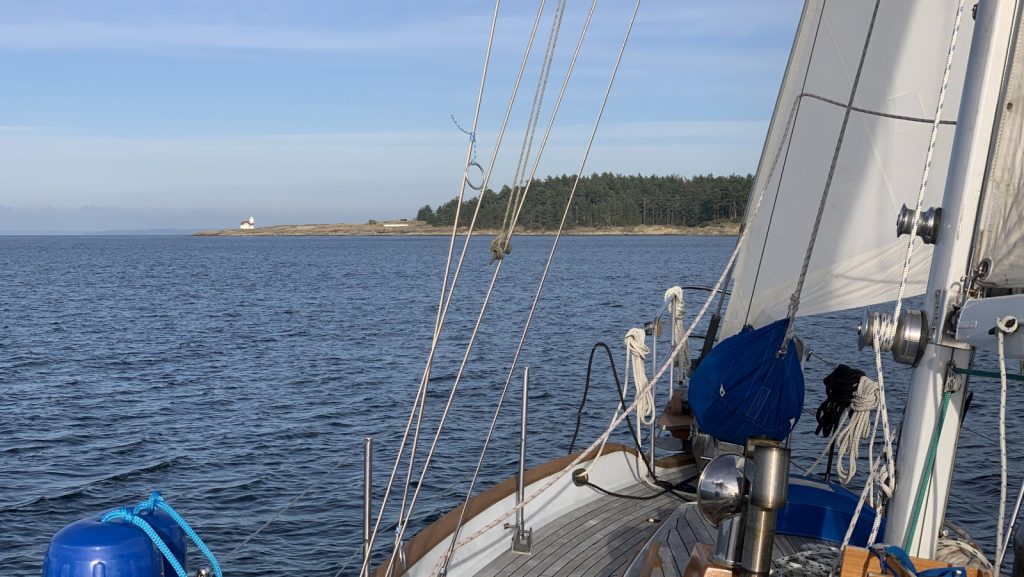 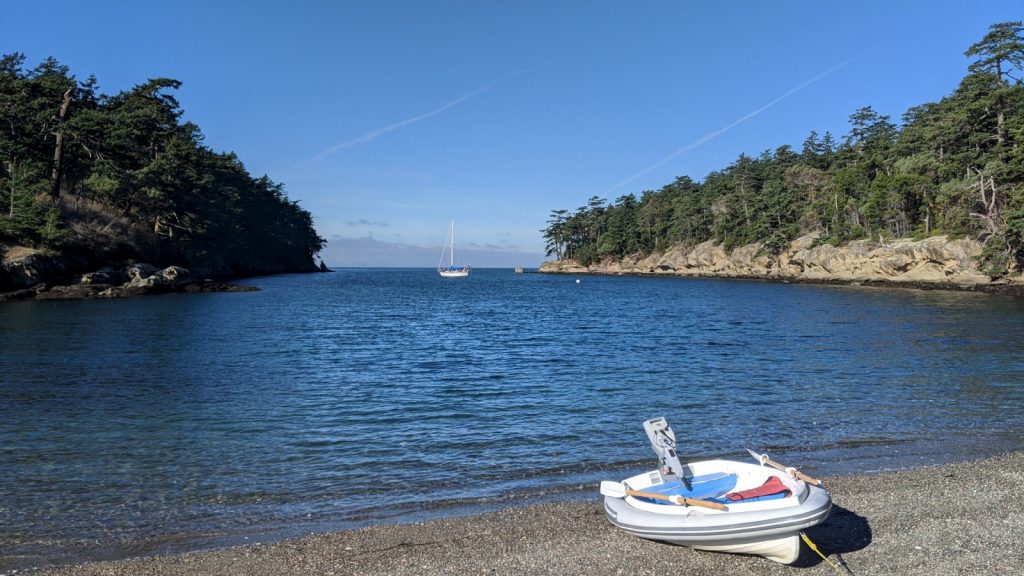 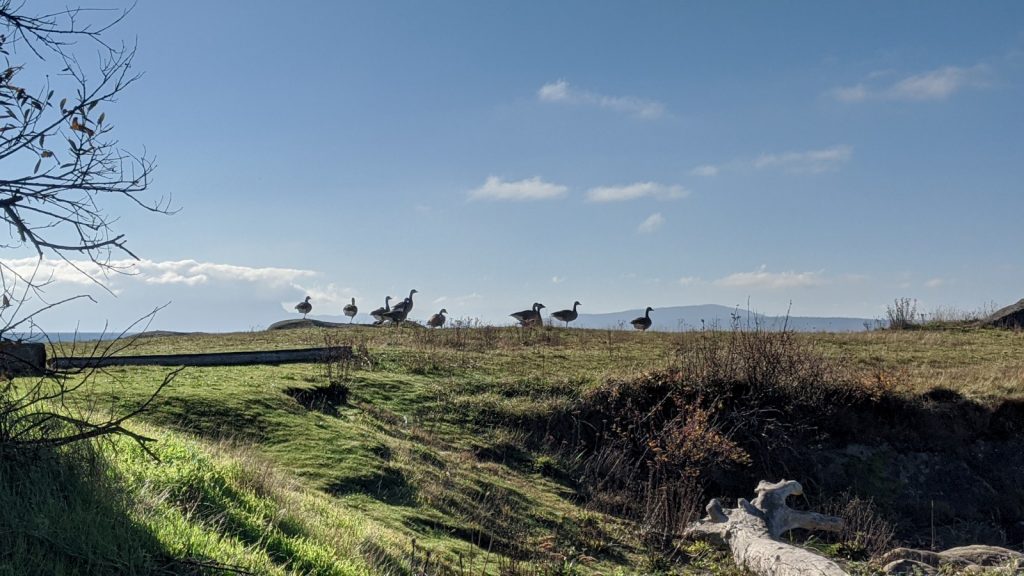 We left the following morning to utilize the window between two ugly weather systems and sailed (mostly motored) down the East side of Orcas Island to the tiny, new-to-us, island of Doe Island (another State Marine Park). Even though we arrived late in the afternoon, we splashed down our dinghy and got straight to shore. My memory of reading about this island (two years ago now) gave me the impression we would have a family of friendly deer to welcome us. This proved untrue – sigh. In fact, as beautiful as the little island was, it was barely two acres in size so our hike around the trail didn’t take long at all. We were back at our boat in no time where we slept nicely in the anchorage and, once more, moved on the following morning. 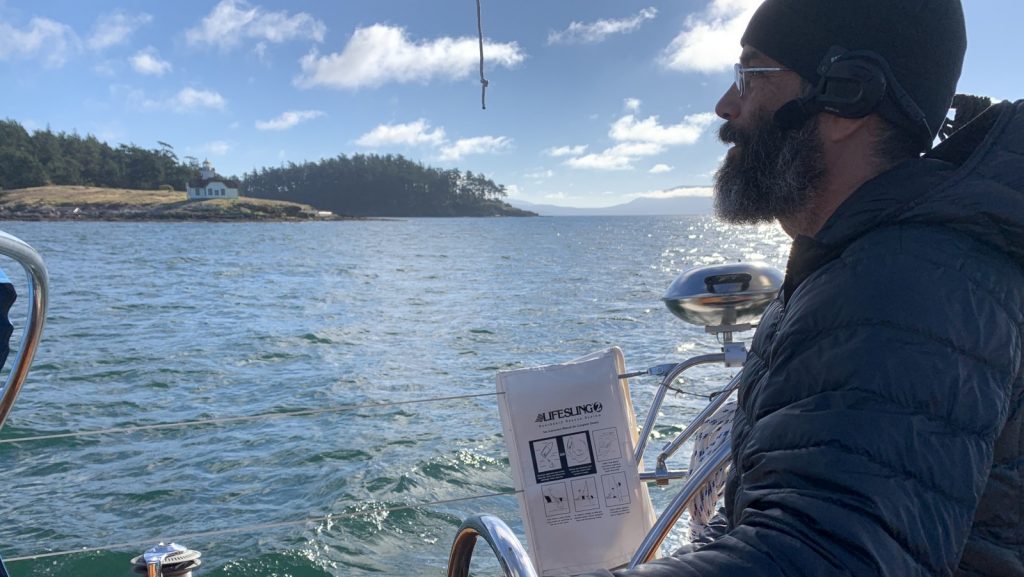 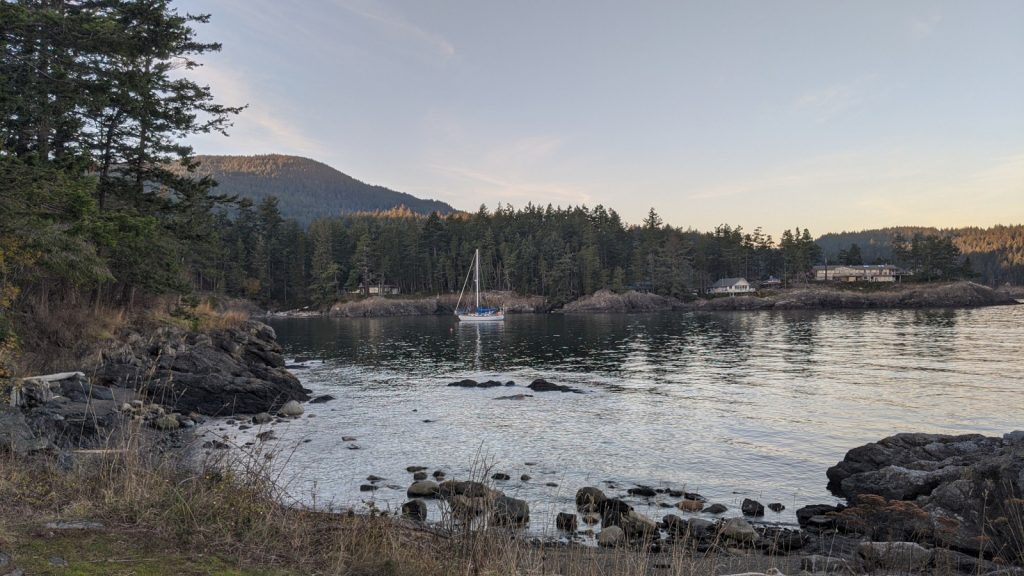 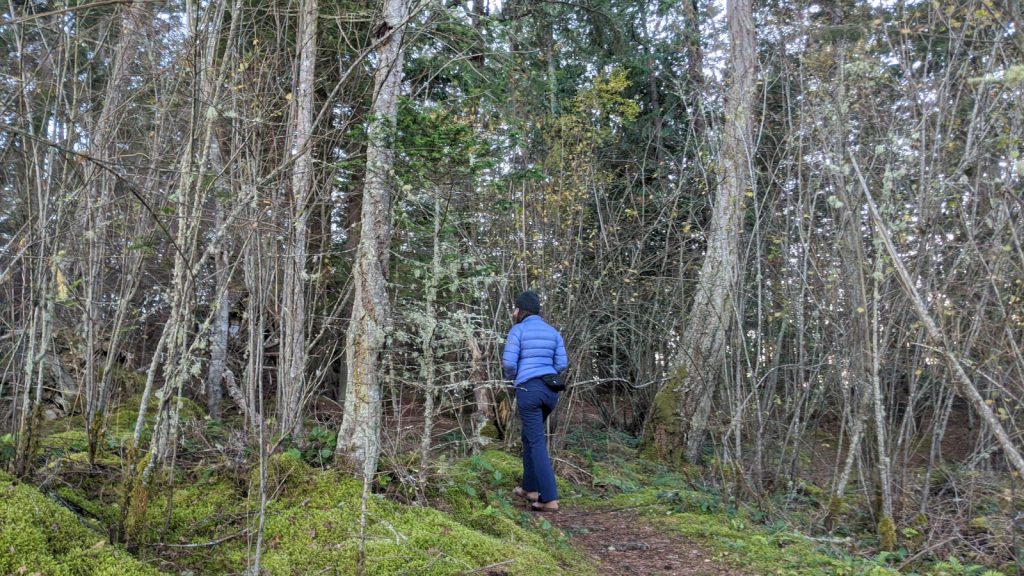 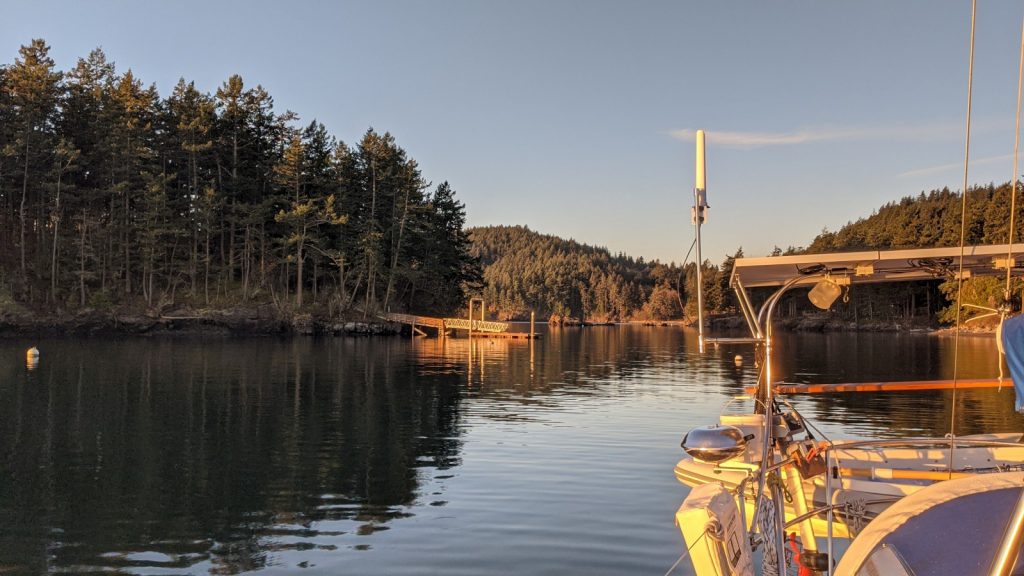