We are still waiting on the refrigerator part to come in, so we are forced to resupply our ice stores every few days. It isn’t all that bad as our freezer can produce some ice blocks to keep our fridge-foods cool, just not enough to do it all on it’s own. Luckily, just a short hop away from Jones Island, on the south-western tip of Orcas Island, is Deer Harbor. We had yet to visit Deer Harbor in our two seasons sailing the Puget Sound, making it an easy choice for a stop over and to resupply – something new at least. The small market in the public marina provided our needs (including a popsicle or two) and even permitted us to top off our water tanks before leaving the area. 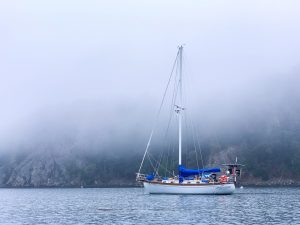 It wasn’t much in terms of blow-your-mind-nature or anything. Just a small protected cove with two marinas – one private, one not – and a safe place to drop the anchor for a few nights. The night before our departure an old wooden sailboat pulled in beside us that I developed quite a crush on. I watched as the crew of this old pirate ship (my imagination runs wild) raised a gas lantern up a mast as their anchor light – which crushed us both under a wave of embarrassment. The boat, and their methods, were so old-school we felt significantly less salty to be able to enjoy the luxury of electricity in it’s vicinity. As we were sailing out on Saturday morning I made sure to do a close pass to get a good long look at the handsome ship. My body aches just thinking about the maintenance todo list that captain must have. Wooden boats are beautiful and all, but I sure do not want to try to keep one afloat. 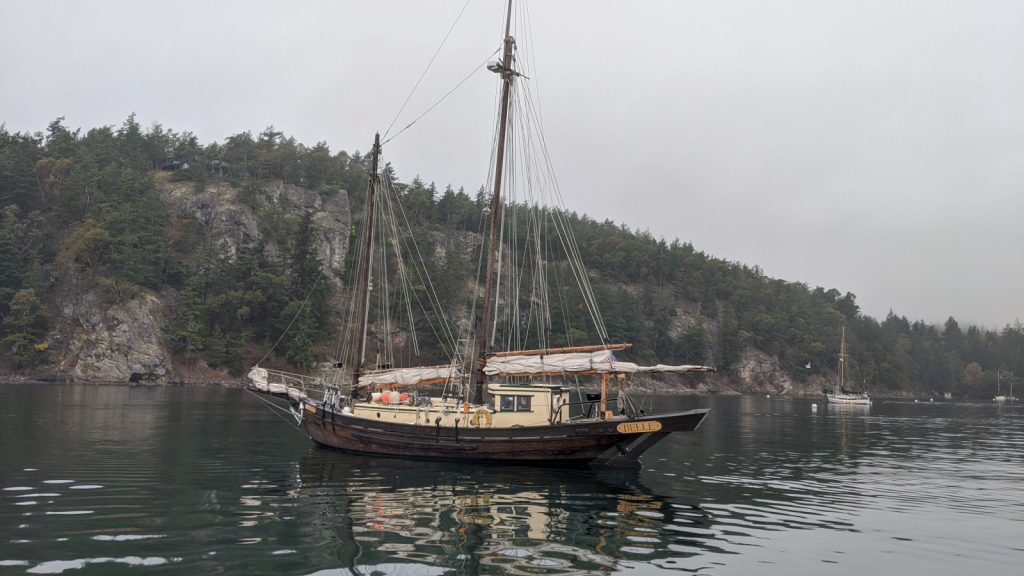 The weather was still yet again. Not much wind to raise the sails for, so the trusty motor would get us to our next destination. Trusty, up to this day. Upon turning the key to start the old guy, it cranked for a second but did not start. I turned the key again and was met with total silence. Multiple other attempts were met with nothing from the engine. At least we hadn’t raised the anchor yet. During my hunting for the problem I asked Kerri to turn the key, which promptly started the motor. This after I had already tore up the entire companionway to access the motor, and I had done nothing at all to resolve the failure-to-start. It is worse to have a problem that you do not know the cause, than to have one in which the cause is known. Will the problem return in a more dangerous predicament? Time will tell. 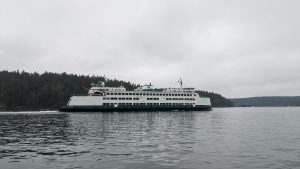 Motoring east between Orcas and Shaw islands is like playing dodge-em with the Washington State ferries. There are two ferry terminals in quick succession, with at least one ferry passing through this small body of water at all times. This year, with the AIS system installed, this ferry dodging is a bit easier. We can see them well ahead of time, and more importantly we can see their predicted path leaving us with clear directions of where to go to stay out of their way.

Time and distance passes at such a different rate than when we were land-nomads. In the van we would travel a few hours and cross into a completely different environment – from plains to mountains, or mountains to ocean, etc. In our sea-nomad life, those same few hours moves us only to the next island, or in this case only to the other side of the same island. It takes some time to get accustomed to this, I assume. I’m not there yet myself. So, in a few hours (and not that many miles) we were arriving at our next destination.

Obstruction Pass State Park would be our overnight spot. It is quite exposed so with the weather staying calm for the short term, it was a great time to take a mooring ball in the park located just outside the infamous Obstruction Pass, which we intentionally avoided last season. It is a small park so the trail system didn’t take a whole lot of time to complete. Very pretty forest, but only a mile and a half later and we were back at the beach where the dinghy awaited to bring us back to Meriwether. The calm evening and night surprised us both as we expected the currents to reach into the not-so-protected anchorage and wreak a little havoc during our stay, but it never did. No complaints. 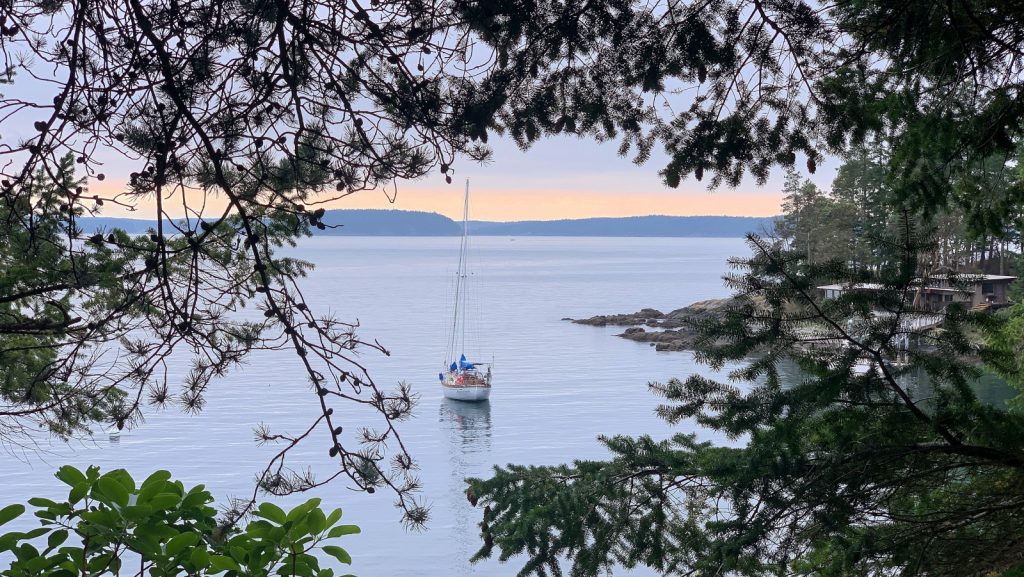 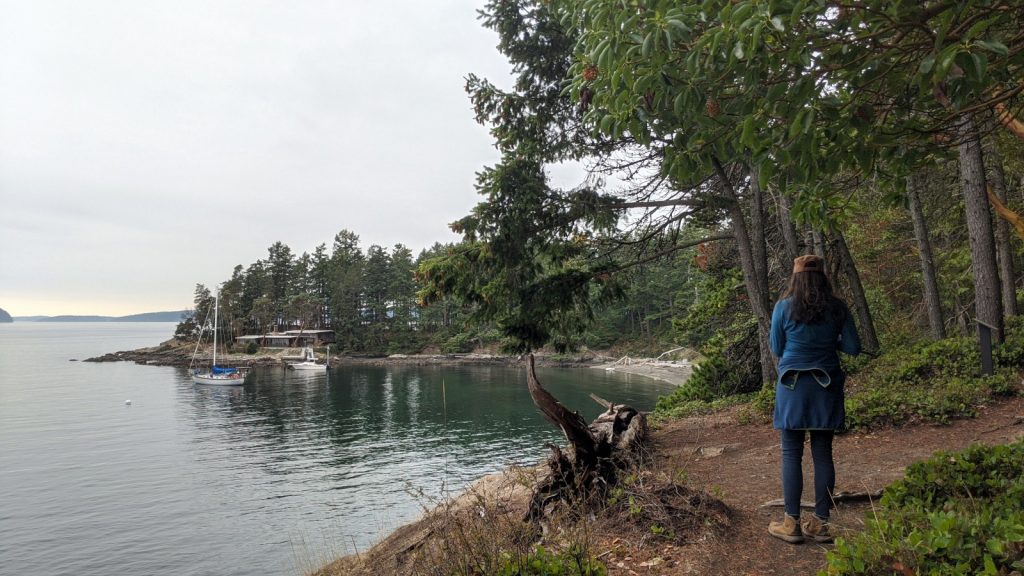 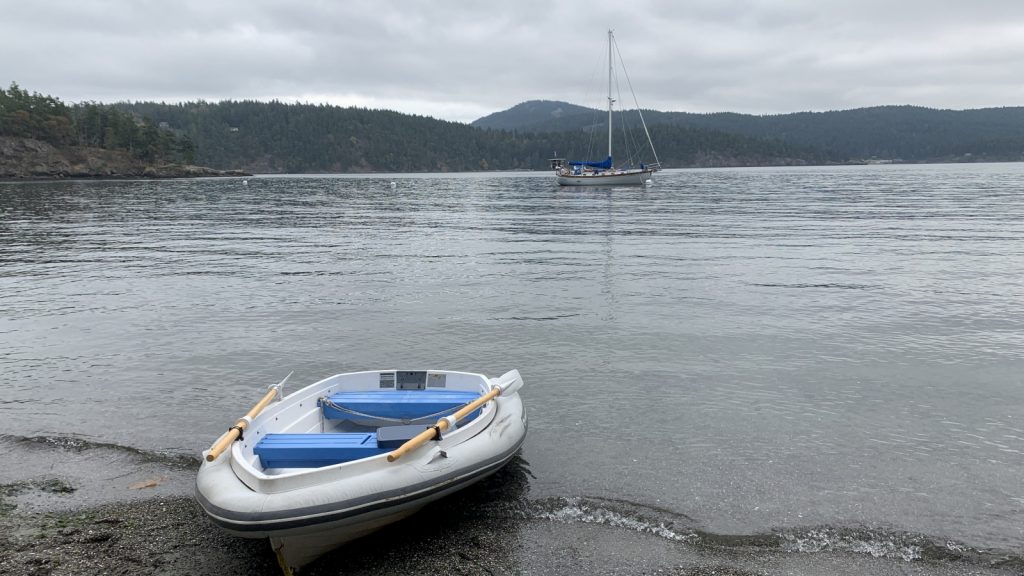