Wrapping up our pre-season projects

With the Canadian border closed to all non-essential traffic, the stress to leave Bellingham by our arbitrarily-set-by-us-date has been released. Although there has been no rush to complete the slew of projects, they do keep getting accomplished at a good pace. I even took a few days – alright, a full week – off major projects to give my back a rest and yet the to do list has grown smaller. The biggest accomplishments in the past weeks are as follows; 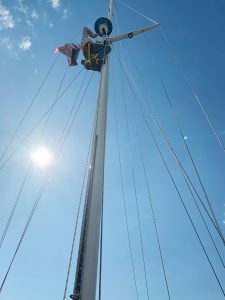 Since our old radar – straight from a 1980’s submarine – could not decide which direction was North, it was designated for a replacement and upgrade. After some shopping around over the winter, Kerri found a Wifi enabled radar dish that allows any of our laptops, phones, and tablets to get the radar data, which will be damn helpful to have that info with us no matter where we are on the boat. We rarely sit down in the interior of the boat while underway. It also meant that the large green-pixel display unit (which we both love BTW) could be removed, freeing up a fair amount of space in the nav-station (aka, Kerri’s desk). The only pain in the ass part of this project was the need to climb the mast to remove the old dish and swap it out with the new one… without dropping anything. I’m happy to report that we did pull it off, although the power wiring has yet to be pulled through the mast just yet, so another climb is in our future before we can use the new radar. 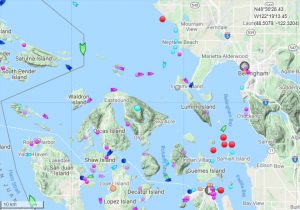 Coupled with the new radar came a new AIS (Automatic Identification System) device. This little thingamabob does all sorts of cool things for us. It’s primary purpose is so we can see all nearby vessels* overlaid onto our navigation software, as well as their route, speed, call sign, etc. Secondarily, those same vessels can now see Meriwether and all her ‘deets’ too. All of this is broadcast back and forth via the onboard VHF radios to avoid collisions between us and much larger boats that can not maneuver as easily. This data is also collected by land-stations and sent to a world-wide database which can be accessed by all – meaning you too can see where Meriwether is (unless we disable the AIS on you, ha!).

* all commercial vessels are required to have AIS installed. Pleasure boats are not required, but many full time cruisers still opt to install AIS for the added safety

The new AIS comes with a new GPS receiver – also broadcast to our devices which solves a major problem with our iPad we have been using for navigation. Apple, in their complete-and-total-wisdom, decided that their GPS would only work if the tablet was being jiggled. Hold it still for 30-seconds, and the GPS would turn off automatically. This meant our navigation software would lose all GPS and location data in all but rough seas. Is there a way to disable this “feature”? Of course not… because Apple knows what is best for us all as we are just mindless sheep unable to think for ourselves (go ahead, ask me how I really feel). At least now we can patch into the new GPS source and keep our location data. Much safer, for sure.

The final big-ticket item was the installation of our new composting toilet. Since Kerri took the time to write about this subject on her Instagram (she is too cool to blog I guess) I will just quote the source and save me some time writing it all out; 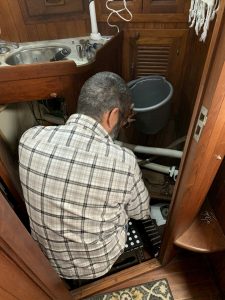 Why, after nearly nine years of nomadic life did we finally decide now to convert to a composting toilet? Let’s go back in time. The van: Easy…not enough room. The Airstream: A black tank system worked great as-is, and ultimately still seemed like the most responsible way of disposing of waste. We could go three weeks boondocking with our 39 gallon black tank before needing to dump. Most places we only stayed a week, and we almost never stayed anywhere more than three. Dump stations were almost always readily available. And, though composting toilets do a good job of breaking down waste to a point that it’s not really a hazard to toss it, in the short time it takes full-timers to fill up the solids bin, it hasn’t really composted completely. Plus the frequent pee container emptying, semi frequent solids bin emptying—it all sounded like a lot of hassle to fix something that isn’t broken. 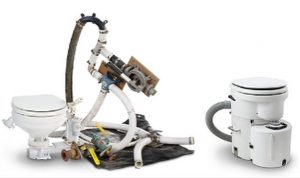 So why now, on the boat? Especially when we have an even bigger black tank? Because boat black tank systems are an entirely different, stinky, grumpy beast. Think about an RV waste system: gravity is entirely on your side. Your waste drops directly down into the tank. When you want to empty the tank, you hook up a hose which feeds your waste directly down into the sewage or holding system. Look at photo [left] (from the Airhead website) displaying what a boat system looks like. It’s a mess of different valves and hoses—some leading directly off-board, some to a macerater, some to the holding tank, almost none working with the flow of gravity. Everything, including emptying the tank from above deck, requires a lot of pumping. Things backflow; they stink. You replace all the things that prevent backflow, it still happens, it still stinks. Vents clog, causing more stink and additional problems. Our 45-ish gallon black tank can easily fill up within a couple of weeks, because, while an RV system basically requires just enough water to keep your bowl clean, in a boat, you have to push enough water through long pipes to force your waste into the tank. Did I mention they stink? Even the black tank itself, which sits directly under our bed, …manages to occasionally seep out smells from some unknown breached seal. 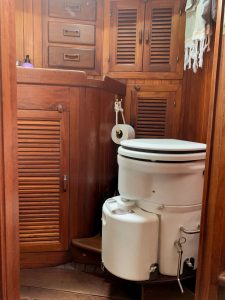 We saved a lot of projects for this year, after we’d spent a season living on the boat, to find out what our priorities will be. This was my #1 project. Aside from the smells, the traditional toilet was the one thing holding us back from longer periods anchoring out. Our water can last for at least a month, if not more. Same with our food stores. But we had to return to a marina every couple of weeks to pump out. Now, we won’t have that limitation. Oh, did I mention the smell?