One checkbox that has been left unchecked for us in the Puget Sound is spotting an Orca whale. There are pods of Orcas in the Sound. We even hear other boaters mentioning sightings on the VHF radio. We come across seals on a daily basis. Otters every week or two. Harbor porpoise are seen just about every time we sail. We even saw a humpback whale last year. But the famous Puget Sound orcas have been elusive as all heck. 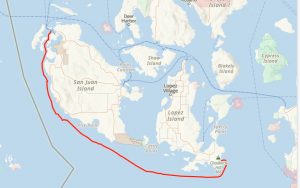 So, with the wind coming from the west (as advertised for once) we took the opportunity to go the long way to our next destination. This would entail going around the west side of San Juan Island. Supposedly, a pod of orcas call this area home. While I figured this would be our best chance to see them, I was not getting my hopes up. Nevertheless, it was going to be a great 25+ mile sail along a route we had not done before… so win-win even without the whales.

We set out early, timing our departure to use the ebb current out of Rosario Straight and the flood when we turned north up Haro Straight. The wind would shift from the south to the west through the day, keeping it on our beam (side) the entire way. We do not often get to sail on a beam so it was good practice. With the smoke mostly cleared, calm waters, and a good breeze we were having a great morning as we sailed out of Watmough, around Iceberg Point, past the American Camp on the southern tip of San Juan, and started our way north in what was becoming a gaggle of other boaters on the water. 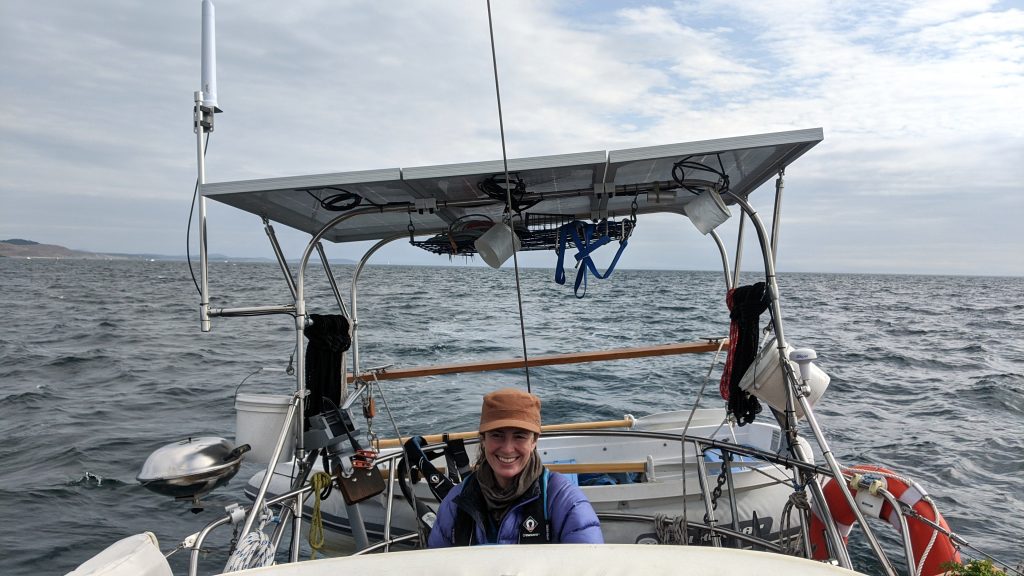 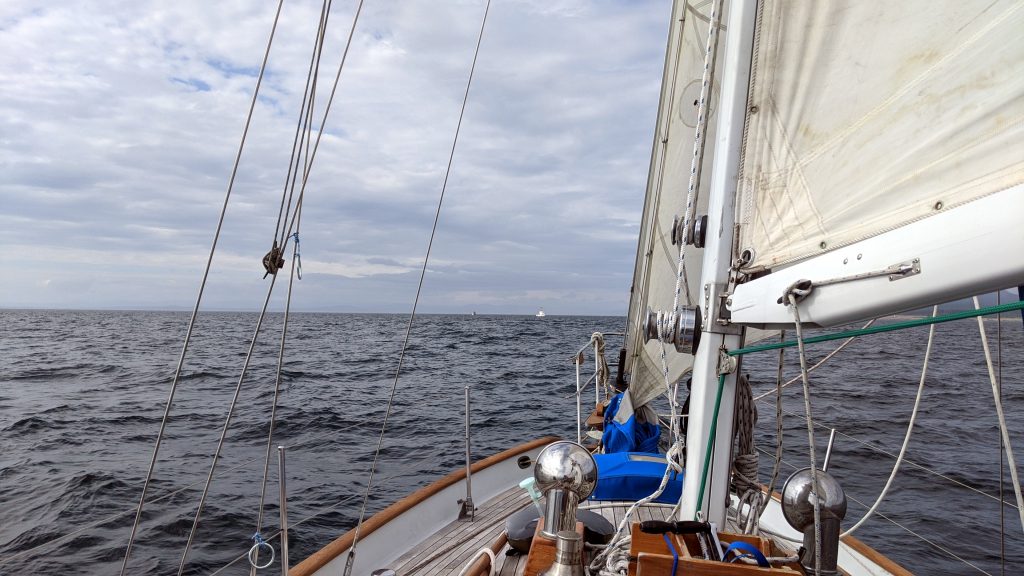 We hadn’t even considered that a crowd of boats may mean that the whales had already been spotted. One of the vessels was a large Coast Guard ship. To us it appeared to be keeping the US/Canada border under control, but it had just launched a small RIB (inflatable boat) into the crowd and one of the other boats was hailing it on the VHF. We eaves dropped into their conversation, which turned out to be all about the whales in that area. We perked up and started pivoting out noggins and tally-ho there were whales on our starboard! Woohoo – check box checked.

Over the next hour or more we saw more and more killer whales. Most were from a quarter mile or more away so our pictures were not much more than a black speck in the dark water. A couple attempts at getting the beasts on video resulted in some extremely shaky footage, mostly of the teak decking as Kerri and I both have the problem of disabling recording when we are trying to enable it, and enabling when we think we are disabling. This results in a lot of videos of the inside of our pockets and/or our feet, and a whole lot of “not again” comments later in the day. I did get a couple glimpses of the whales on video, which I will share with you for reading this far. 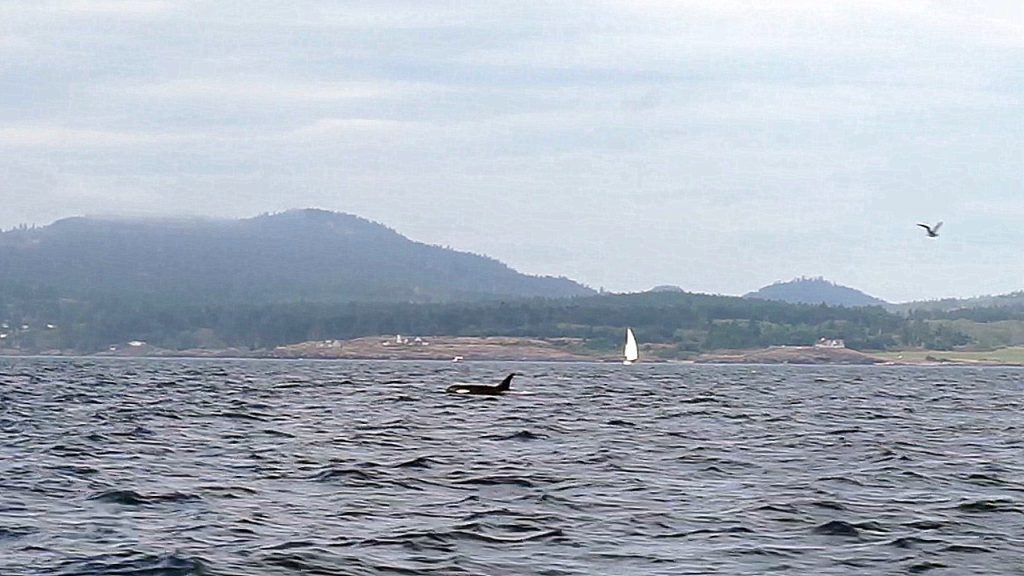 The most dramatic part – and one we thought we had on video but it turned out to only contain the teak deck – was when we tried to avoid two whales coming directly at us. I turned hard to the port (left) only to get directly into the path of two other whales I had not seen. Although we are suppose to stay hundreds of meters from any of these creatures, there isn’t much a sailboat can do without some serious advance notice, and now we had little to no forward movement as the sails were trimmed incorrectly for the new wind direction. We ended up just stalled out in the path of four orcas, two of whom (one a youngster) decided to swim directly under Meriwether. As the adolescent whale came out the other side of the boat he/she jumped out of the water – twice – I assume in play. It has been a long time since I felt such awe… a very long time.

Eventually the wind would do it’s normal thing and just leave without any goodbye, stranding us miles away from our destination. By chance we were left floundering in front of the very State Park we camped at in October of 2018. I remember us starring off into the water from our camp site, dreaming of sailing these waters. Now, here we are in those very waters… windless. 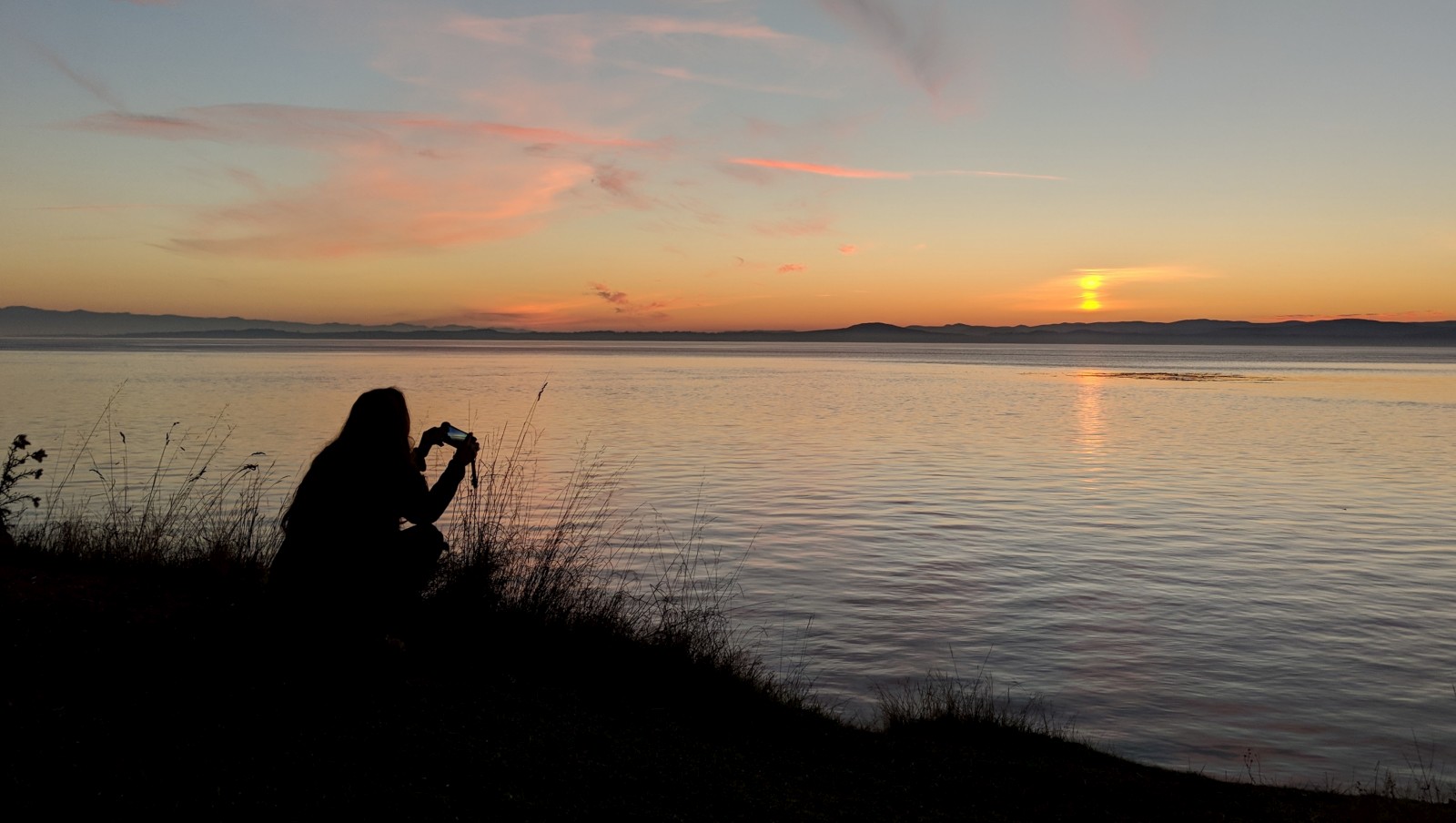 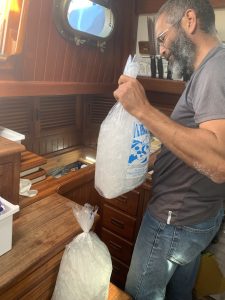 We dropped the sails and motored into Mosquito Pass to find an anchorage after the long and exciting day on the water. It was at this time that our automatic bilge pump activated again, informing us of a second attempt within a week to sink Meriwether. After pulling up a floor board, it was verified that we were once again taking on water. We got to anchor and found that the same hose that leaked just a few days ago was leaking from a completely different spot – spraying water all over our fridge condenser, shorting it out. The leak was a quick fix, but it will take three weeks to get the part for the fridge. Luckily, our fridge was once an icebox. So we bought some ice.