Winter in Alaska on a boat, part 1

“We will just stay in Alaska…”, I said. With a straight face I might add. I meant it too. Our plans to spend the winter abroad – in a warmer country – was scrapped very early on in 2021. Mostly due to the pandemic, but also because we could save a ton of money – or at least spend said money on the boat instead of airfare and hotels. So, yea, we had decided to winter here in Alaska… in a boat. It’s not unheard of, but hearty you must be, and we are not so much. 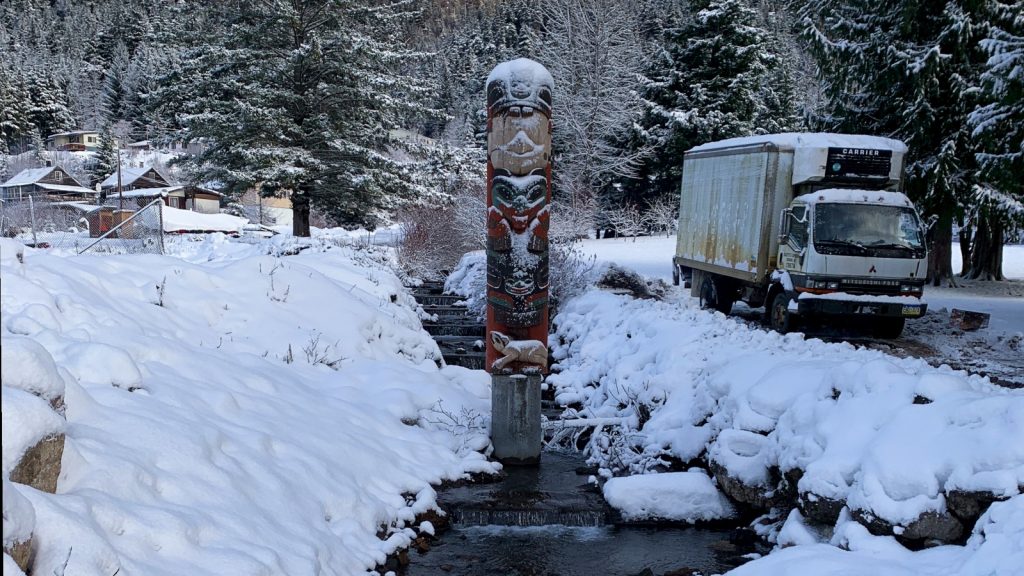 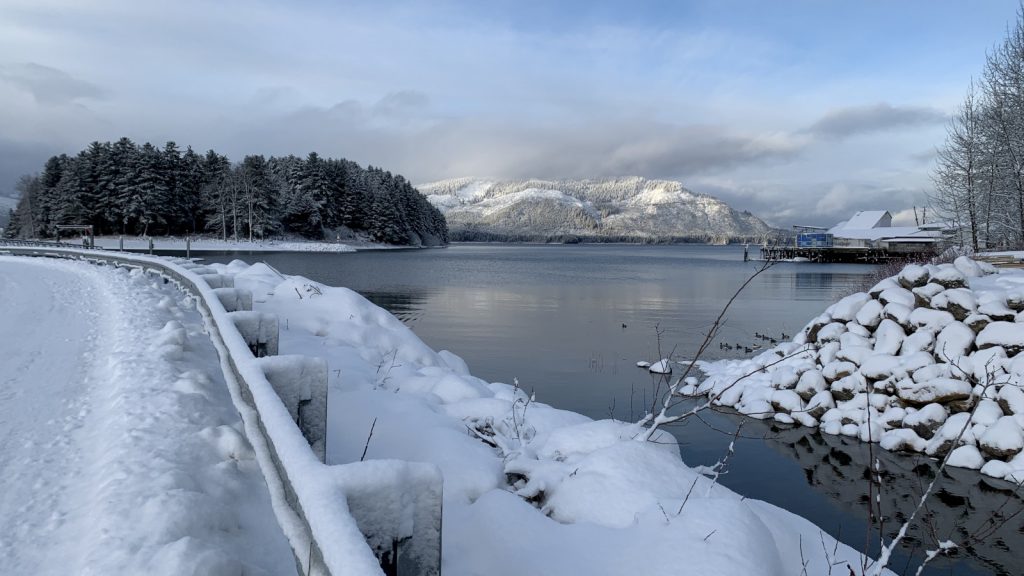 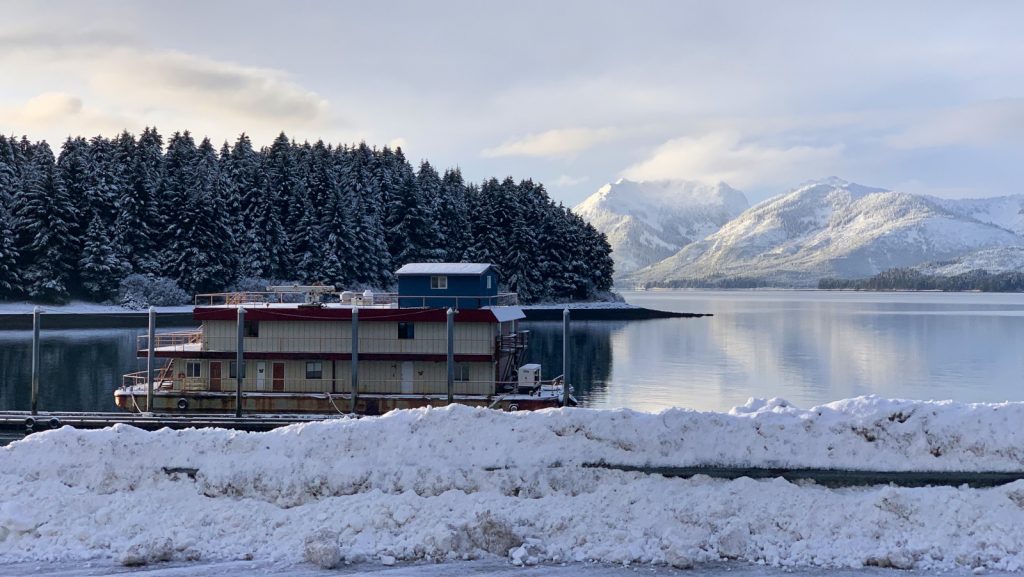 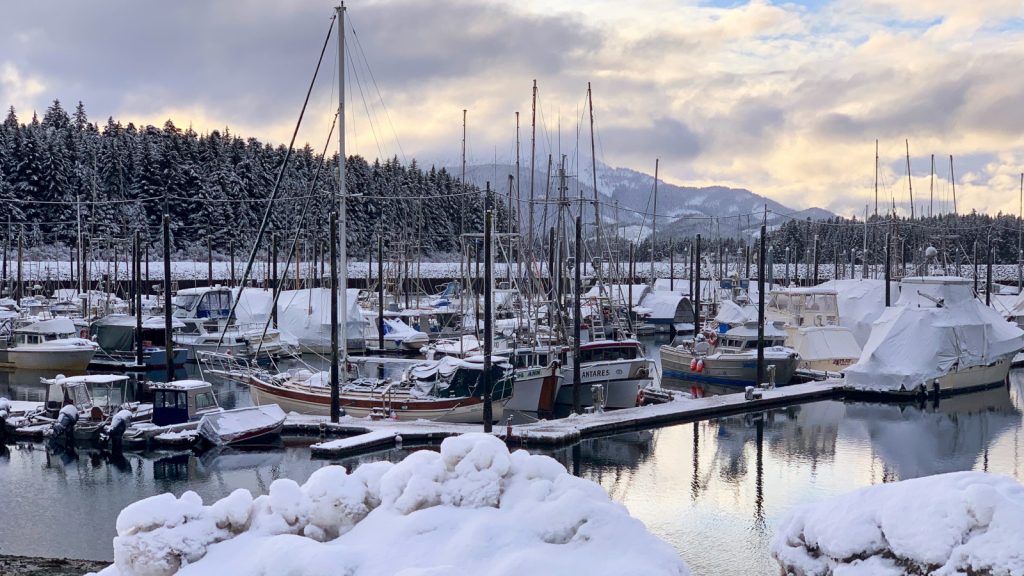 Since our motor issues back in September, Meriwether had been tied to the dock in Hoonah but for a single weekend out to test the repairs. The weather got progressively colder through out October. Kerri spent her days working to catch up on projects while I spent mine hauling and cutting wood given to us by locals after we made a plea on Facebook. We could only store so much wood on the boat, so a large crate was placed on land, filled with scrap lumber that I had to then cut into manageable pieces each day and haul down to the boat. Combined with the need to haul all our water to the boat (pipes on the dock were turned off by mid October) I was getting a whole lot of work-out without actually working out. 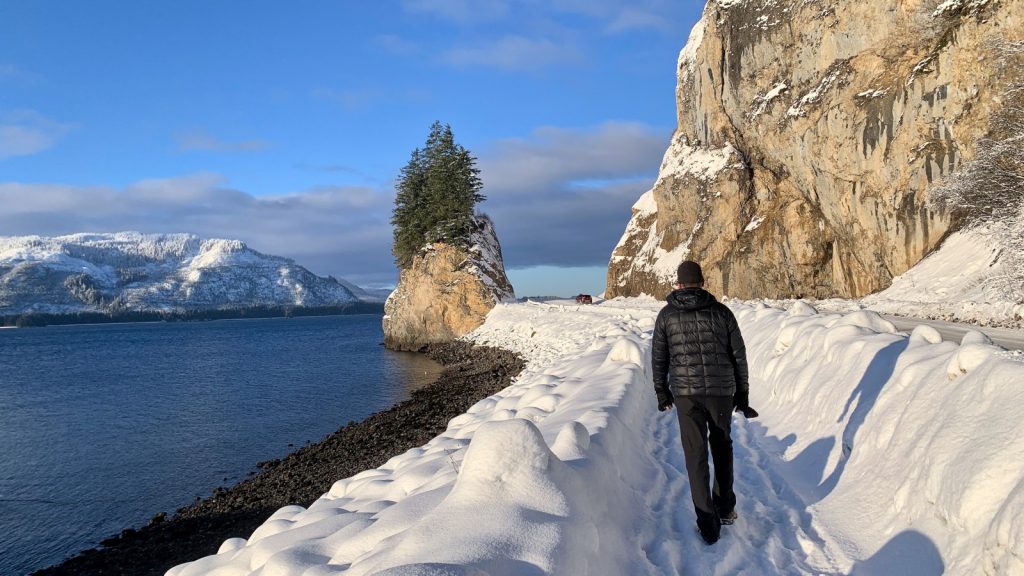 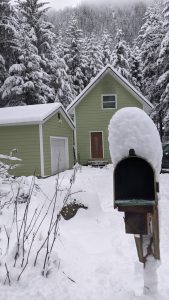 By November Kerri and I were both ready to get off the boat and feel civilized for a few weeks. Honnah has no amenities during the winter months. Only a single mediocre restaurant is open, and the two grocery stores are just Costco shops restocked only once per week. Both run out of anything fresh (milk, eggs, veggies, etc) within 24 hours of the ferry arriving with the shipment. So, we gladly accepted an invitation to house and dog-sit in Juneau for two weeks, which was both nice (read; warm) and stressful (read; worried about our boat the whole time). And even though our boat did lose power twice during that time, a boat neighbor kept in touch with us and kept the power on – in turn keeping the heat on – in turn keeping the pipes unfrozen. During our time in Juneau we did get to explore a bit, when the weather was not complete unbearable, and even enjoyed a holiday meal with a family friend local to Juneau and took two nights in an Airbnb in downtown, complete with a rooftop hot tub, 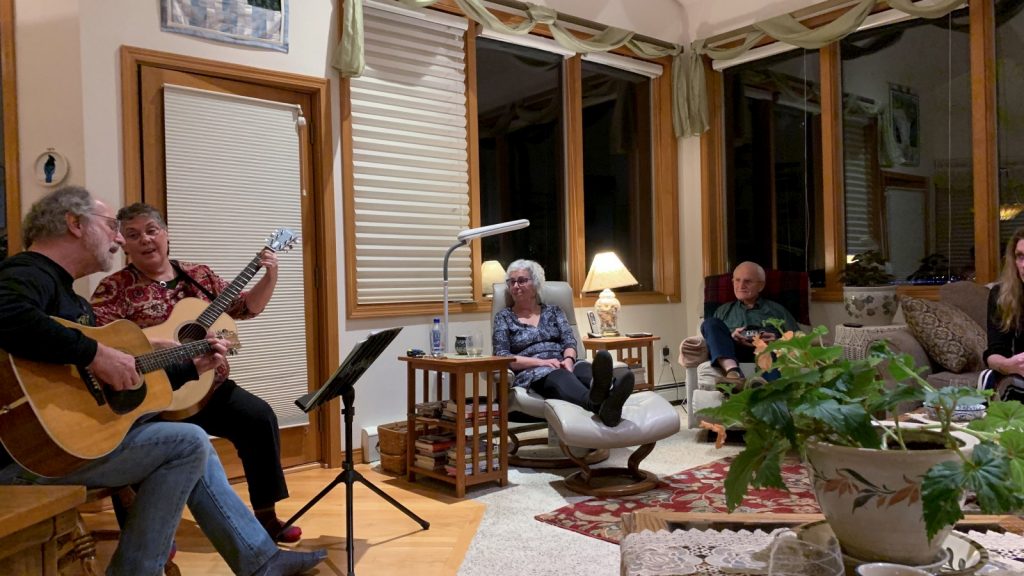 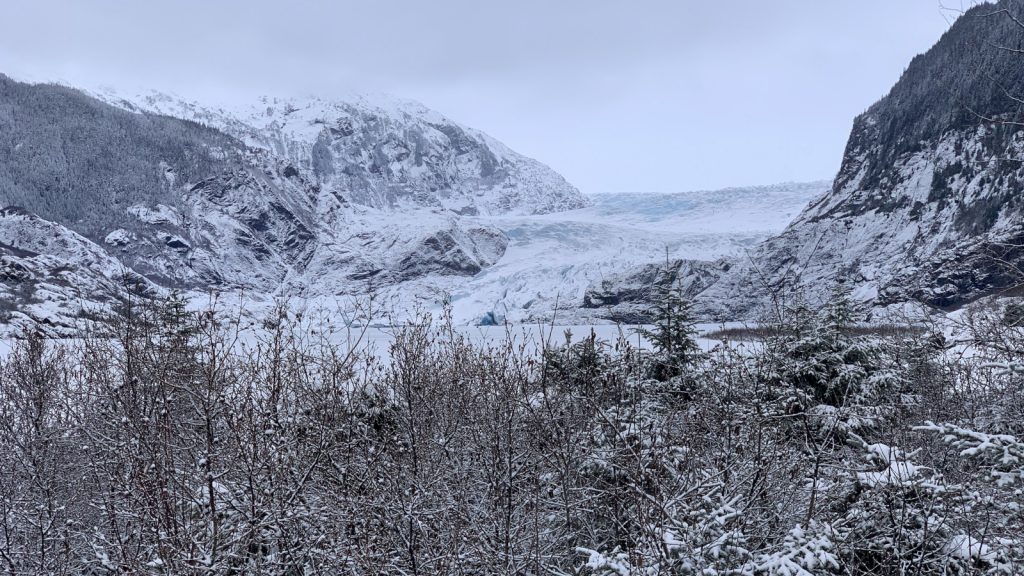 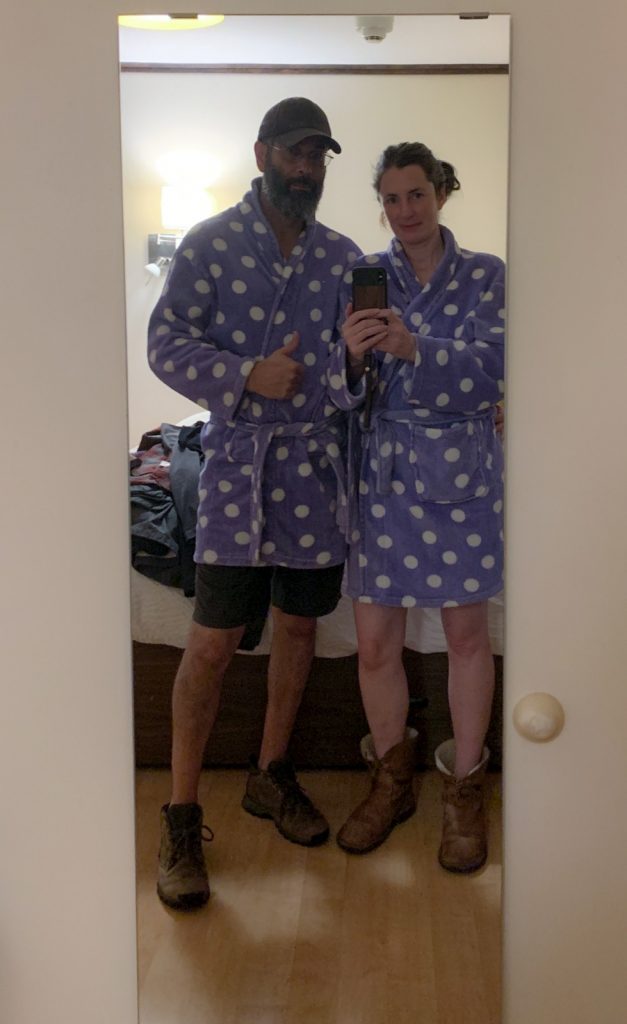 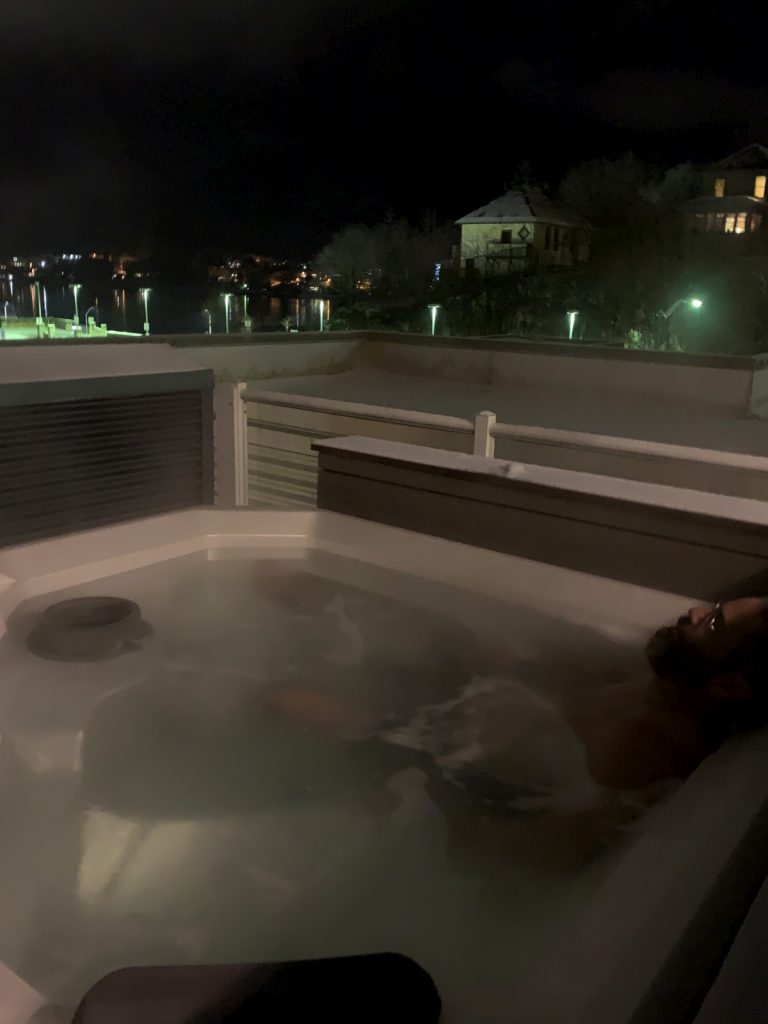 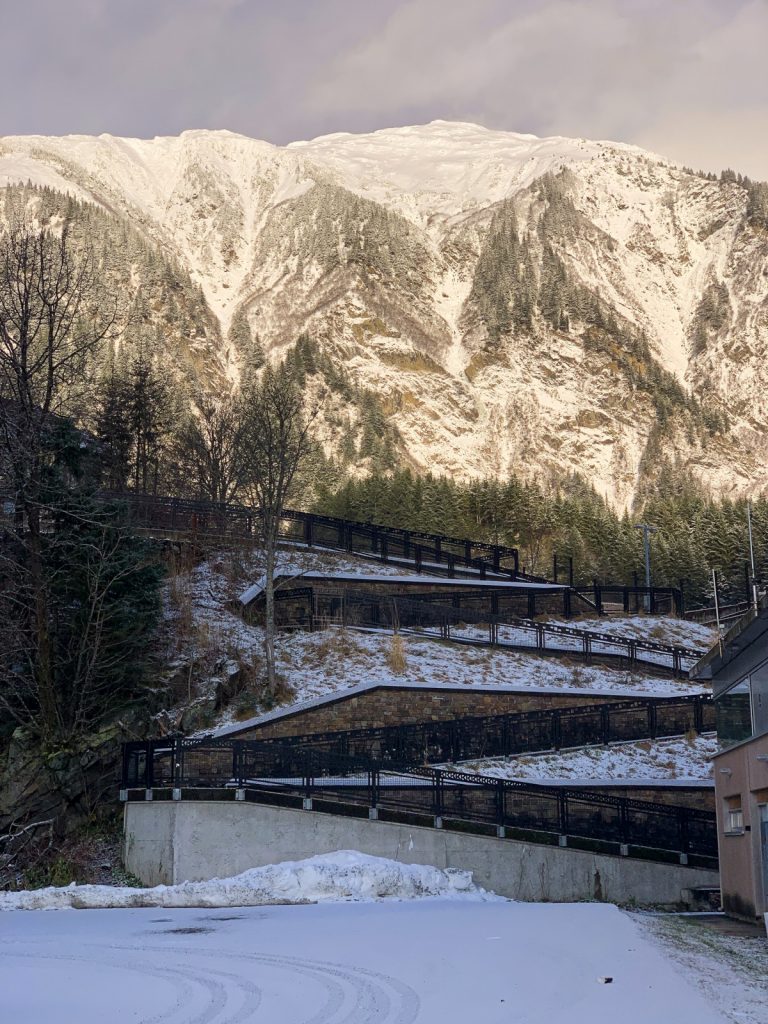 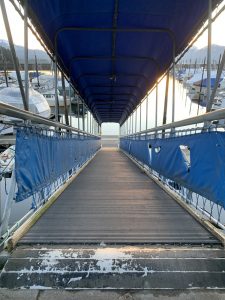 As December came on, so did the truly Alaska winter weather. Here is South East Alaska, it doesn’t get as cold as mainland Alaska, but cold it still gets. When the temperatures get into the single digits for a week, everything in life gets exponentially more difficult. And with greater snow and ice buildup on the docks and marina ramp leading to and from land, special care was required to time all on-land chores with the high tide or risk sliding down the ramp and into the damn-cold water below. It made the daily task wood cutting and hauling it to the boat that much more of a pain, but by mid December I had finished off the bin full of wood and had it all stored onboard. This, then, became our signal to plan to leave Hoonah, which we did at the first (and only) weather window to do so. 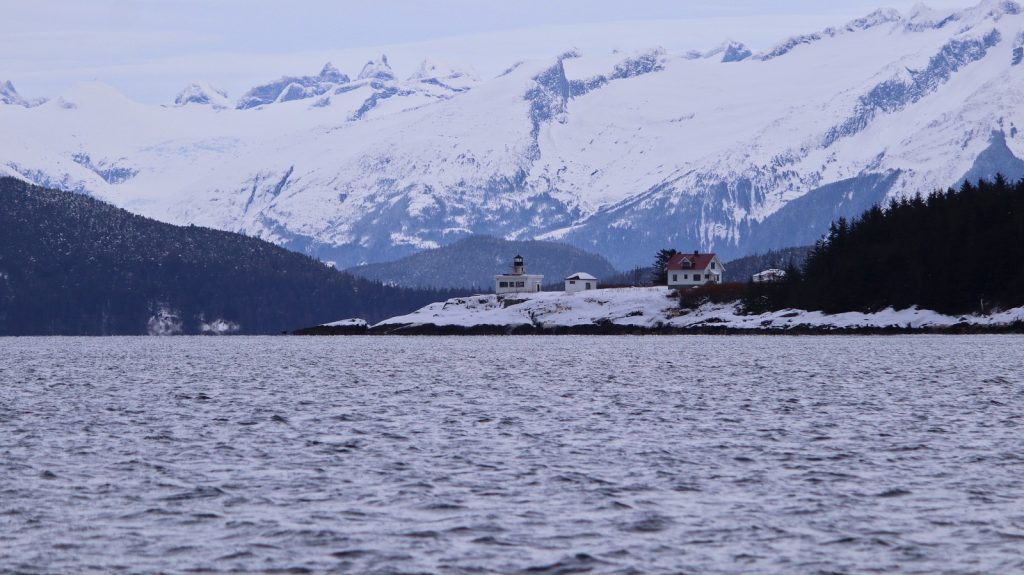 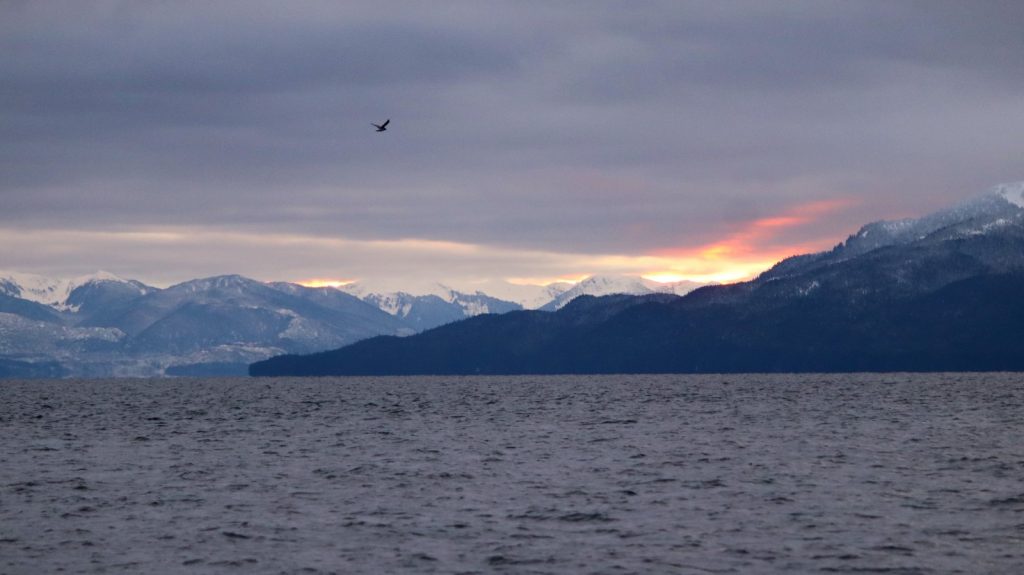 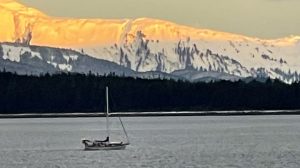 The nine hour trip, motoring the entire way, saw nothing of note happen. It was cold – Alaska cold – the entire day of course, but at least we didn’t have a heavy wind to deal with. Kerri and I took shifts out in the cockpit, usually lasting between one and two hours each before having to trade off and get out of the cold. Thankfully, we kept our wood stove burning that whole trip, so there was some reprieve from the frigidness of being outside for any length of time. Upon arrival in Juneau we were met by the nicest of harbor employees who had all our paperwork prepared and slip assigned. She did this thanks to being warned of our arrival by the family friends who came down to drop off a hot meal for us to have at the end of our log, cold, journey. These two small gestures made a long hard day worth it in every sense. 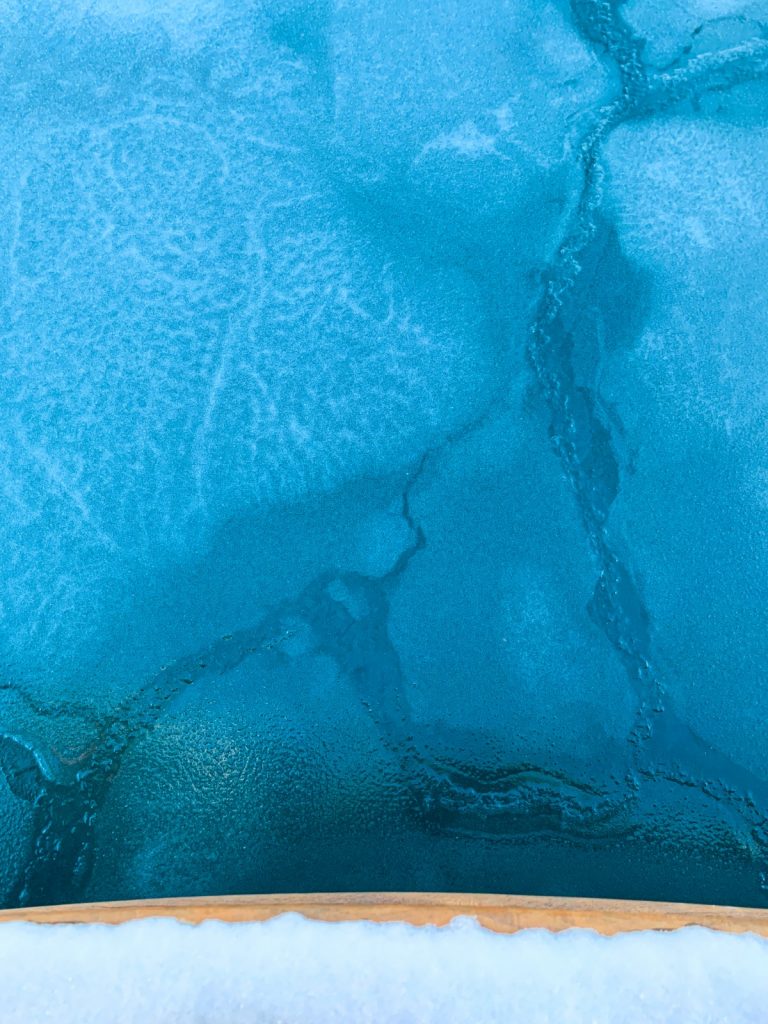 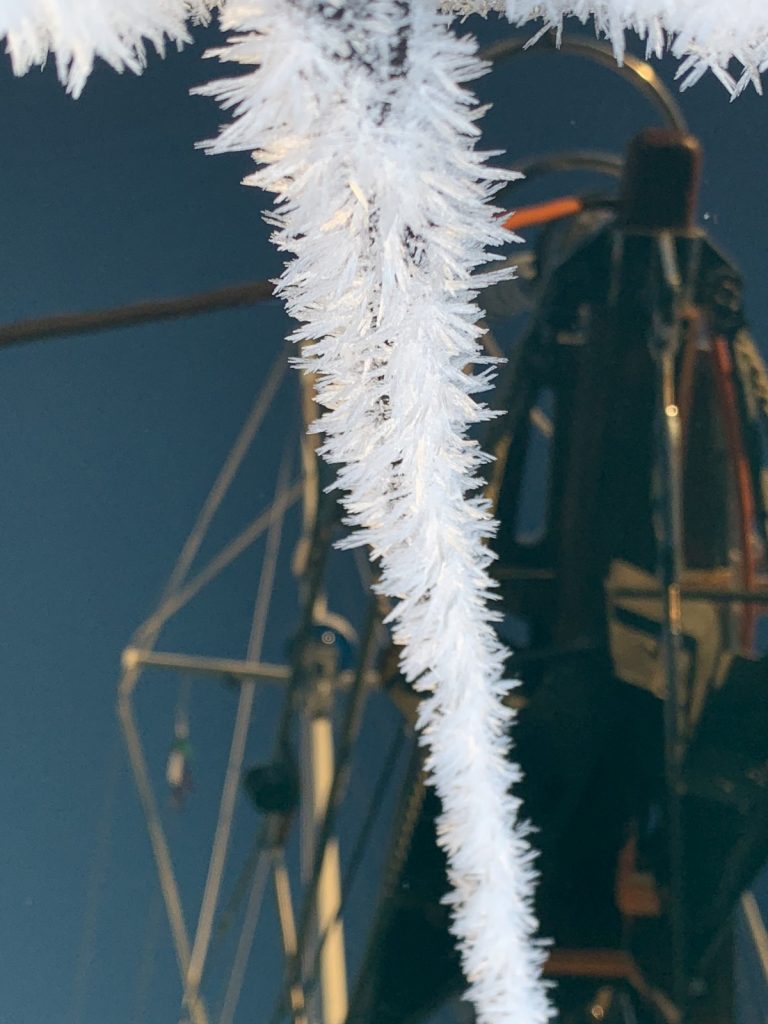 And now we are in Juneau, where we plan to stay until winter allows us to begin our exit of Alaska – some time in April… maybe. Already we have enjoyed the company of S/V Violet Hour who is parked on the next arm in the marina. The power here in Juneau is a bit more reliable, as well the Internet. But mainly the biggest burden that we overcame by leaving Hoonah, is that groceries exist here… and they can be delivered! Oh… and Mexican food! Simply put; that is a huge game changer. 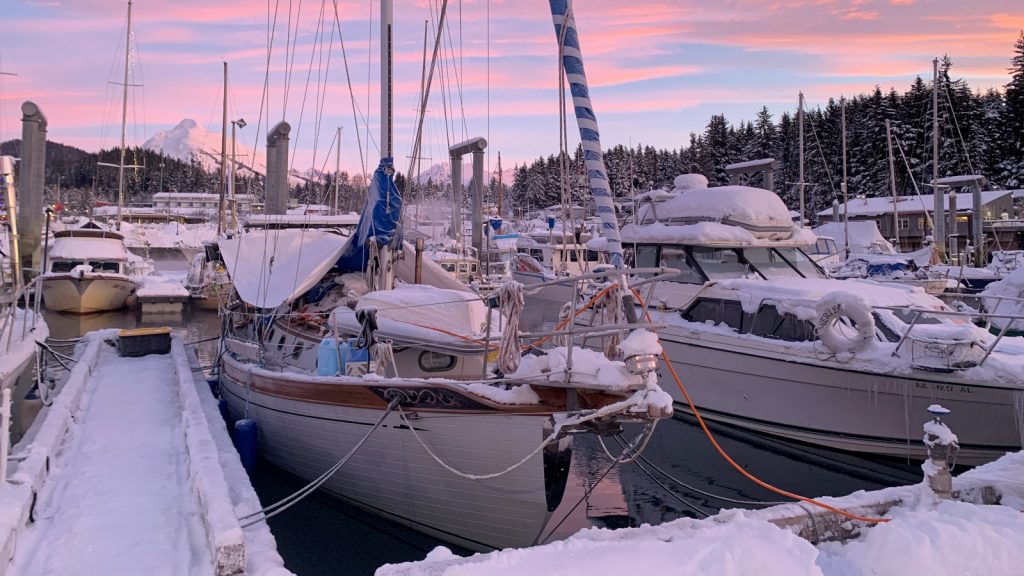 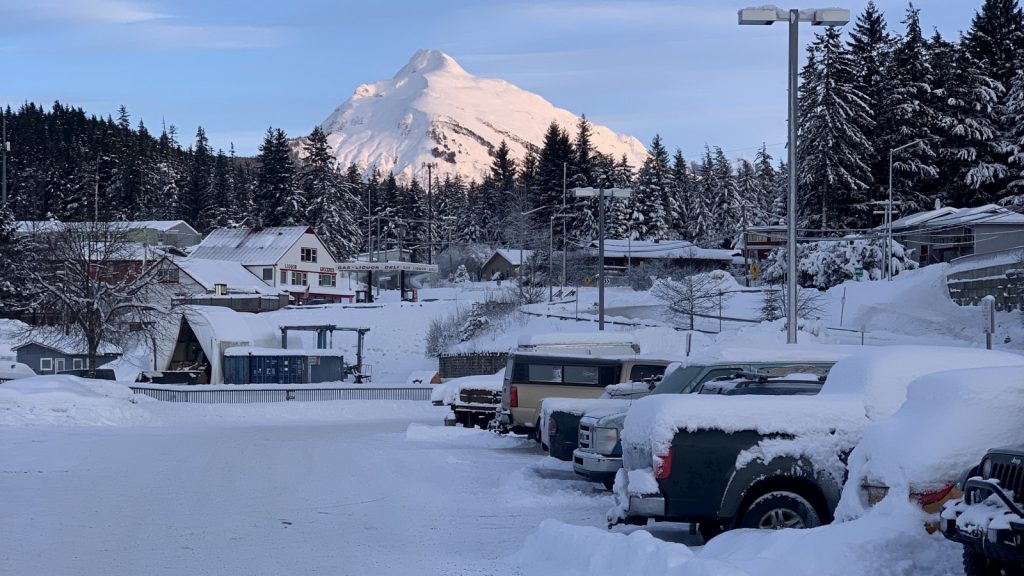 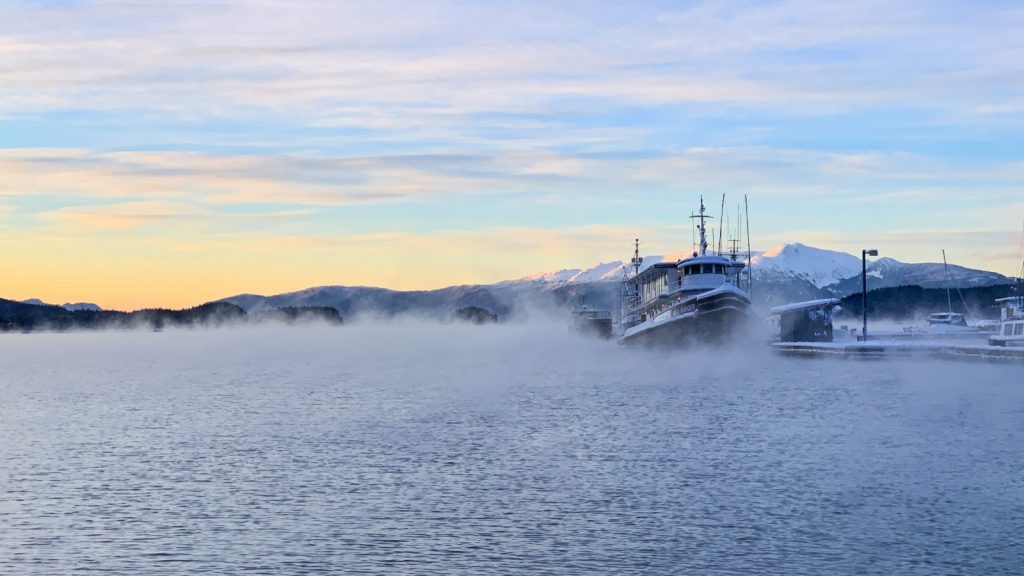 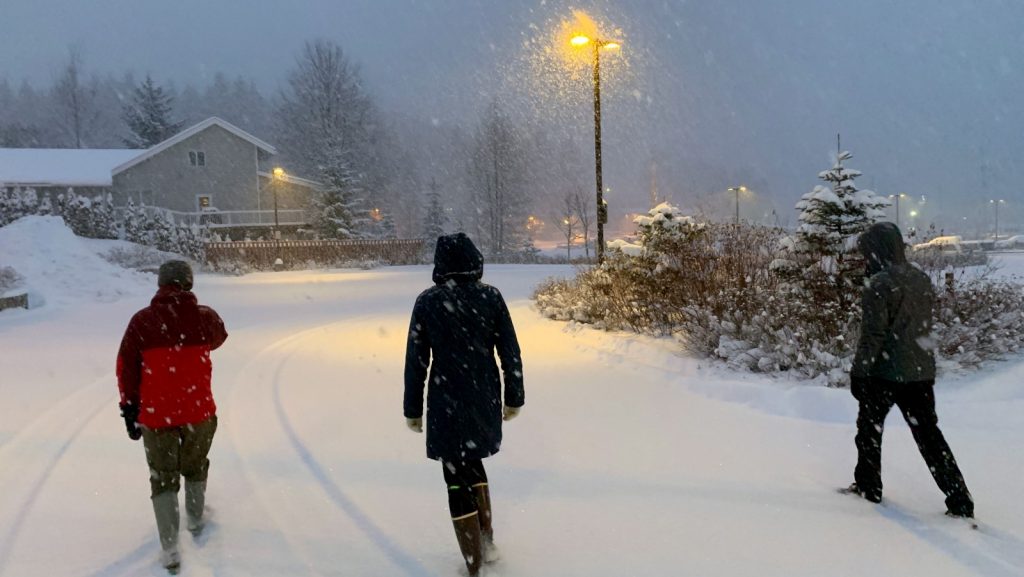