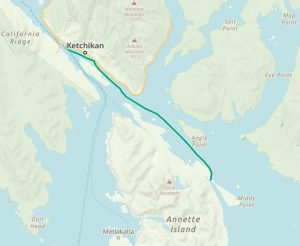 It felt like an eternity staying in a marina for a week and a half, but with all the engine repairs complete we were ready to start our Alaska adventures. We finally left Ketchikan on Thursday evening, motoring south to the fuel dock to top off the tank as we knew what was in our future. Our new engine parts were working great, though I was still stressing about every odd sound or vibration. Two miles later we arrived at the fuel dock, Kerri threw our dock line at the attendant, I put our gearbox into reverse to stop Meriwether’s movement and immediately knew something wasn’t right. The boat stopped, but now it was locked in reverse gear. Thinking quickly we shut down Meriwether’s engine and tied off, preventing the complete and total shit show that would have taken place if we had reversed away from the dock – Meriwether is not easily controlled in reverse. With fuel and propane refilled, I dug my way down to the gearbox to start sorting the problem, which ended up being at the lever in the binnacle.

Within a half hour we were back underway and even though the wind was light, the motor was shut and the head sail came out. Finally free of the ‘big city’ sounds of Ketchikan, we rode the gentle breeze for just over an hour before being forced to turn the key once more. We did have to get to our anchorage before the sun fully set as it was going to be a tight fit. The chart – and guides – were quite clear, but we didn’t need darkness added to the list of complications. It turns out that the worry was unfounded as the sun barely sets at this time of the year, and it was quite bright out through the night. We arrived in practically-daylight at 9 PM, dropped the anchor, and settled in for our first overnight stop of many. 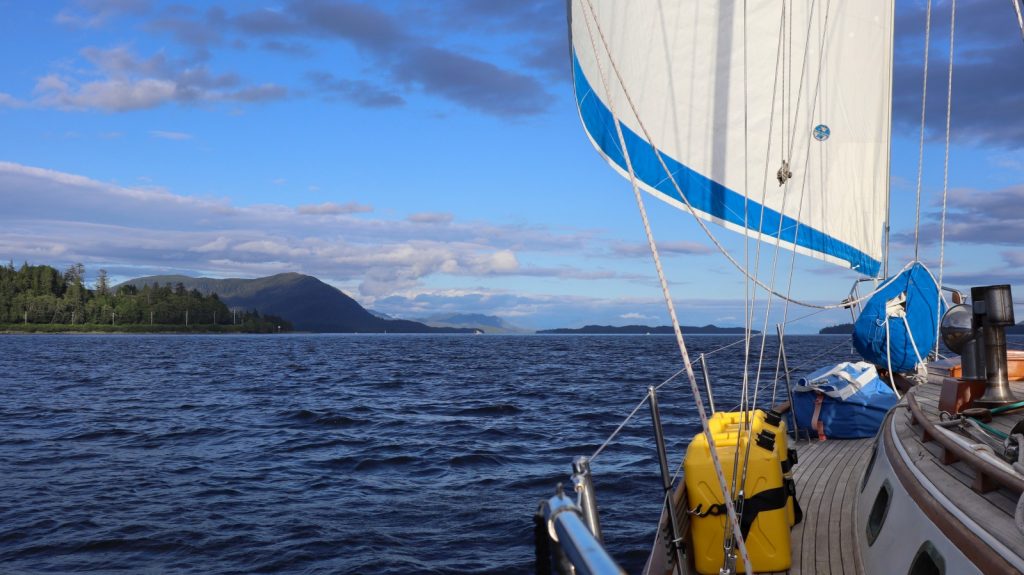 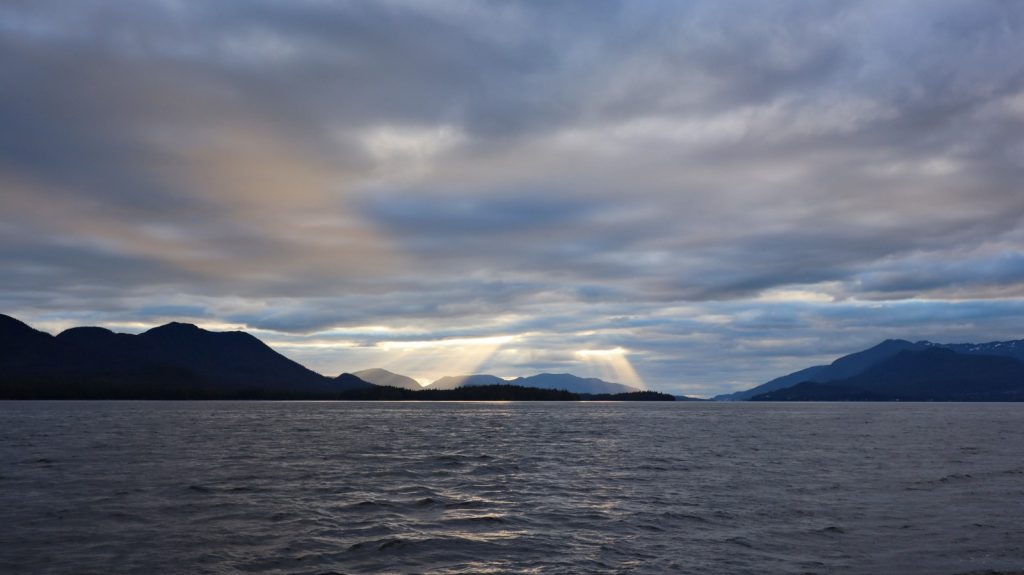 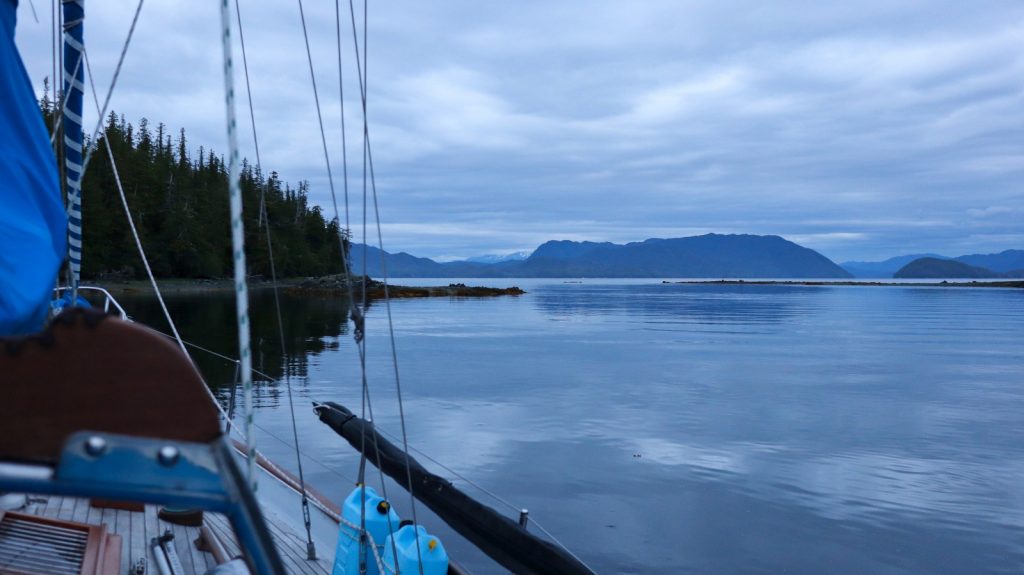 The following day (Friday) Kerri still had work. We had thought we could do that in the anchorage, but those few extra meters out of the main channel meant we had no cell signal. Instead of losing a whole day of work we pulled up the anchor and got back out to the open waters so Kerri could work. I pulled out the head sail again and slowly sailed towards the southern entrance to Behm Canal – which would be our main highway of the week. It was only 8 miles across, but we moved at a very slow speed thanks to having only one of Meriwether’s three sails out. Once I neared the canal, I turned about and sailed away again. This just bought Kerri more time and we were in no rush anyway. It was all quite pleasant actually – I even got a workout in while sailing – and the day turning to late afternoon soon enough. The cell signal would dissipate as we entered Behm Canal, but the wind had picked up and pushed us nicely into the canal. We both knew this is a rare occurance (downwind sailing) and wanted to ride it out as long as possible, so we passed by our first – and even second – planned anchorages. All in all we would sail for more than seven (of the ten) hours we were in transit this day, arriving in Punchbowl Cove just before 10 PM. 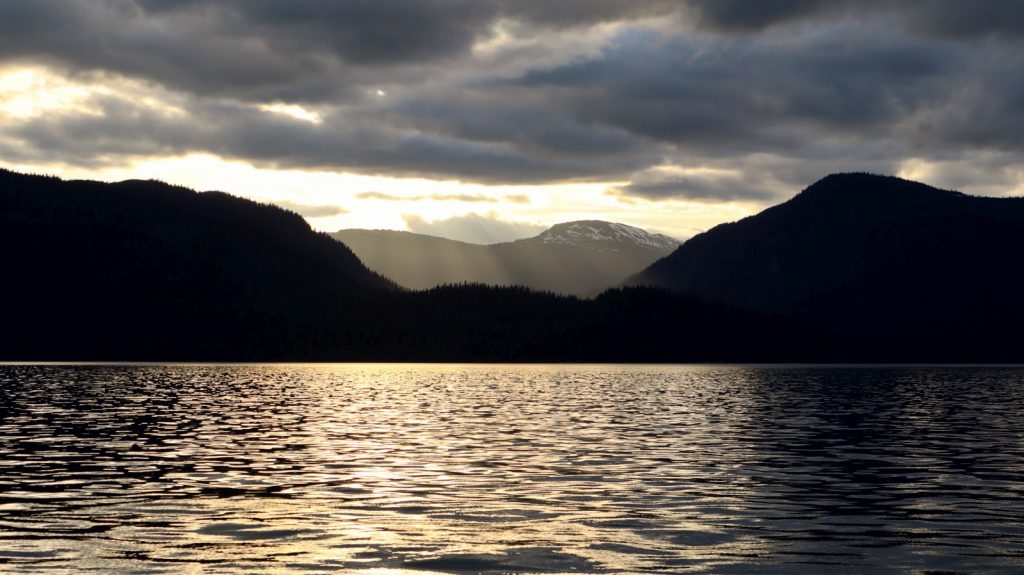 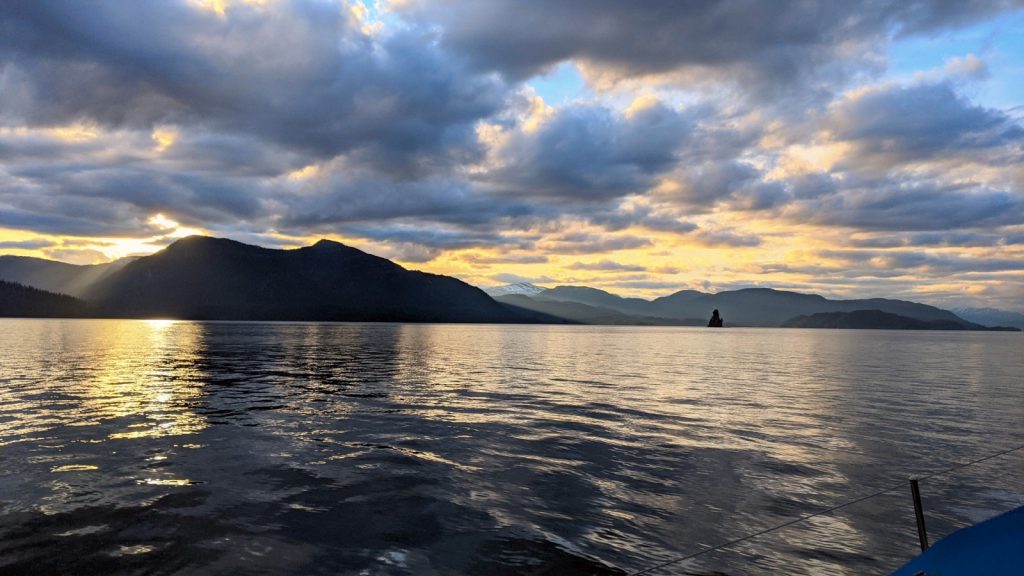 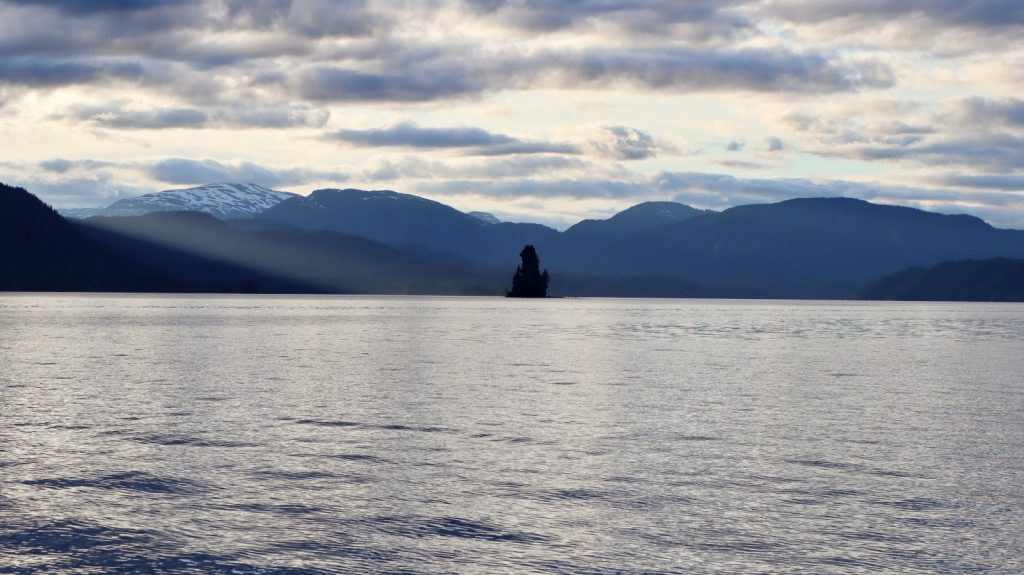 Punchbowl Cove is the “go to place” when visiting Misty Fjords National Monument which can only be visited by boat or plane. It is a big cove surrounded by tall, wooded mountains but for one side which is a 3000 foot tall granite cliff. It is hard to take in whole without having to pan your head as if you were the camera in a Ken Burns documentary. Only when we took the dinghy out for a ride the following morning could we truly see just how tiny Meriwether is when compared to the surrounding mountains. We were nothing more than a speck of dust on the canvas. Alaska is crazy big in so many ways. 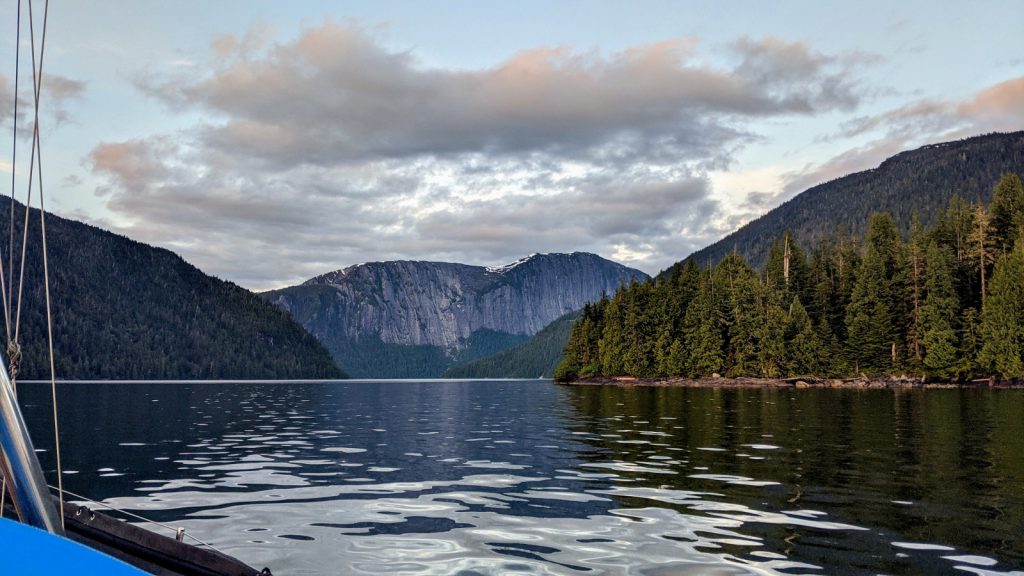 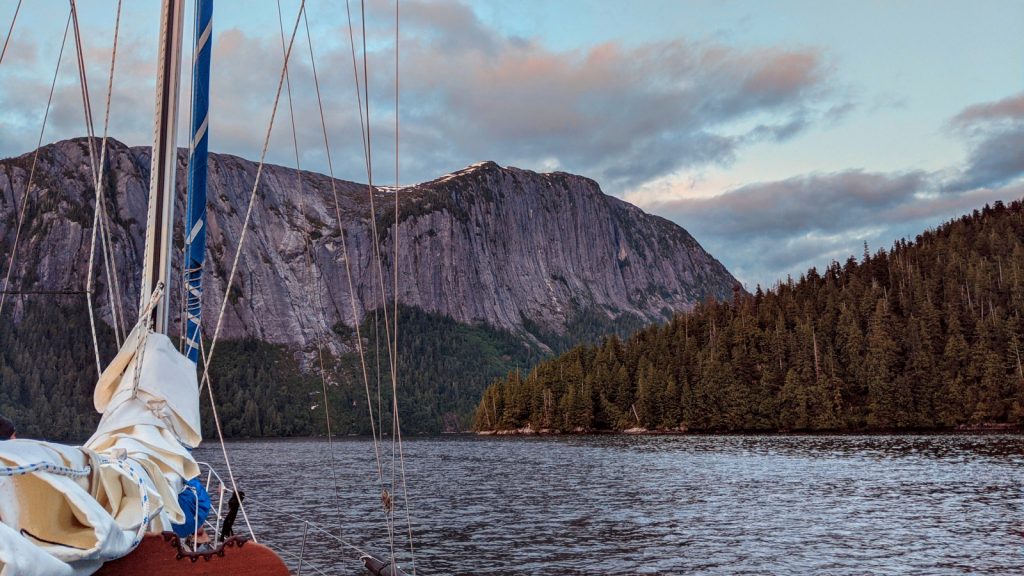 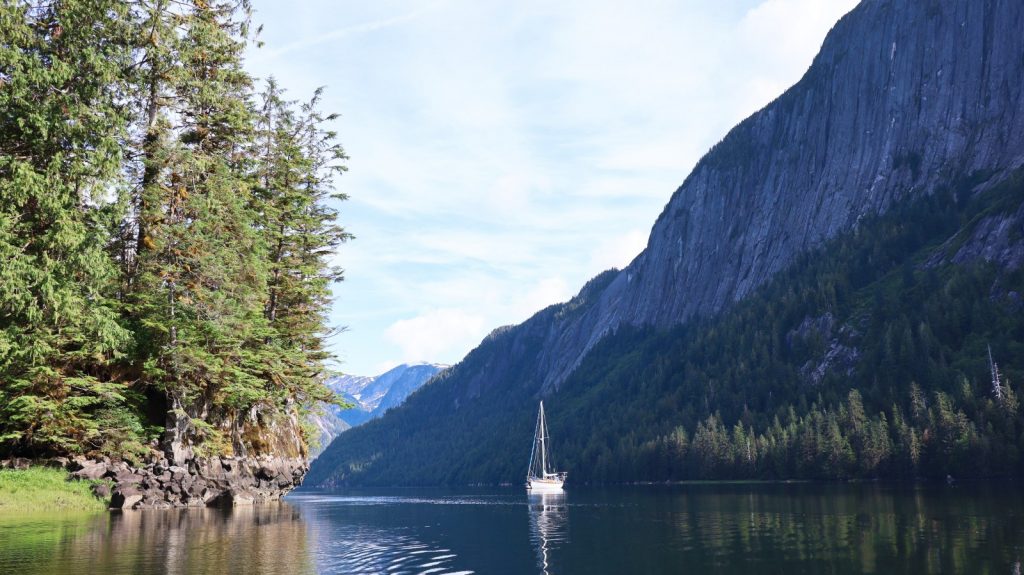 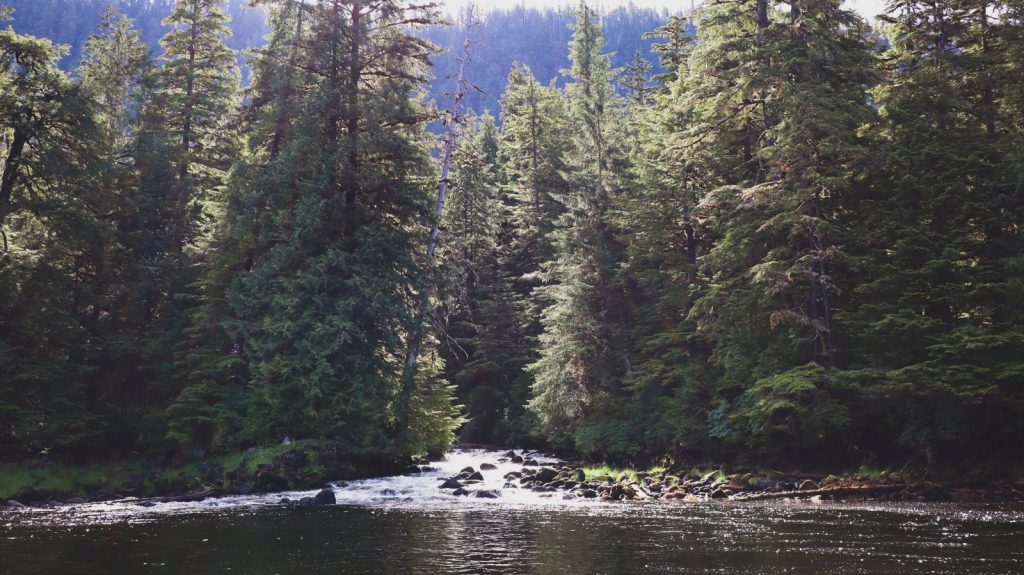 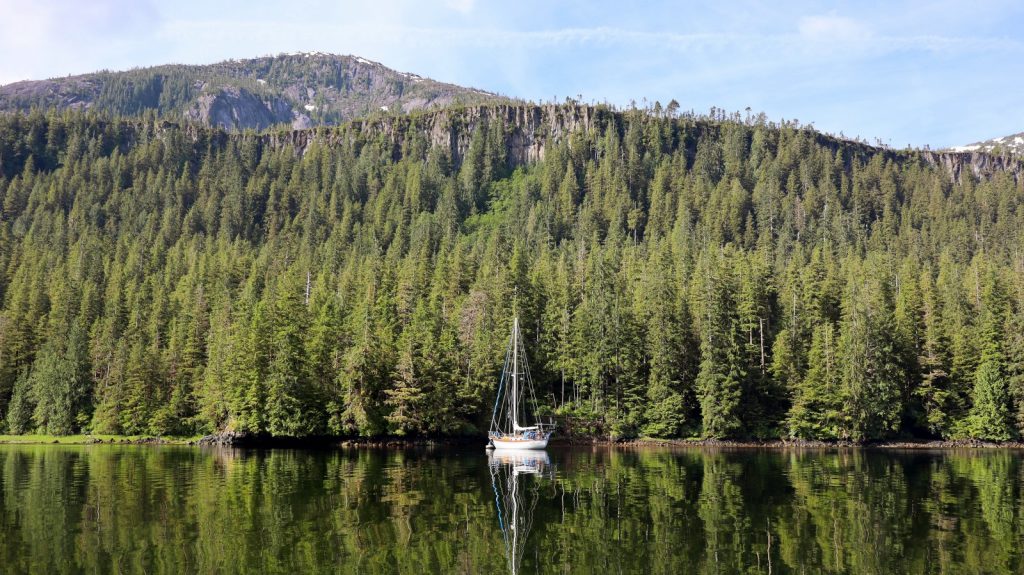 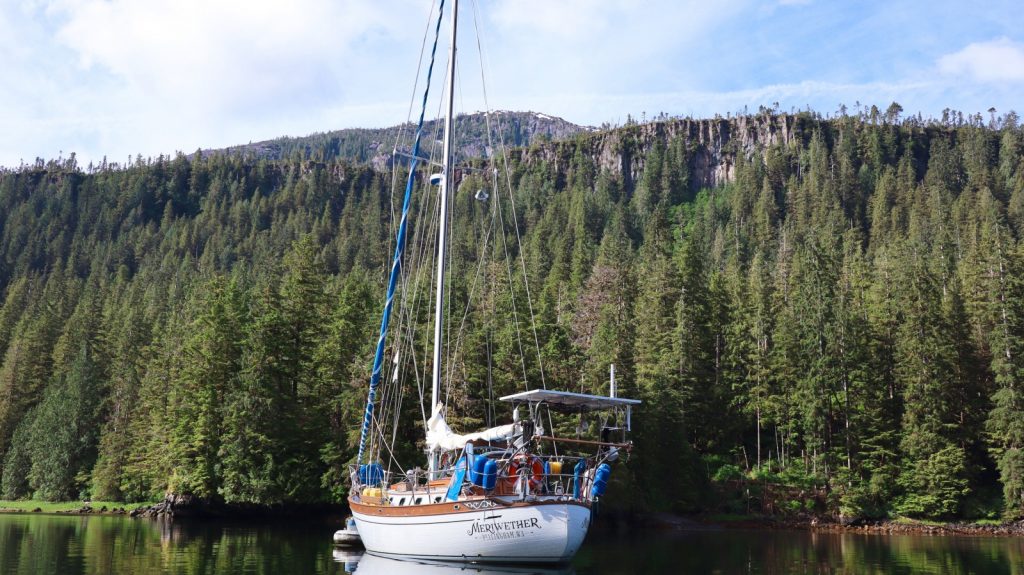 With the need to put in a ton more miles this day, we got to moving without much delay. After a quick peak further into Rudyerd Bay we made our way back to Behm and north to Walker Cove, which just took the awe up a notch. Walker Cove, although not as tall, is more intimate and filled with waterfalls on both sides. We slowly made our way down about two-thirds distance of the cove, wishing we could just turn the engine off to enjoy the sounds of all the falls. At our turn around point there was a lone mooring buoy in a scene straight from a frickin’ Bob Ross painting; grassy shoreline lined by pine trees with a stream leading into the bay from the snow peaked mountain behind… and foraging around in that stream was a momma (I assume) and baby brown bear – our first since arriving to Alaska. Kerri was already mentioning staying here a night and extending our weekend by a day if need be. I could not find a reason to argue. 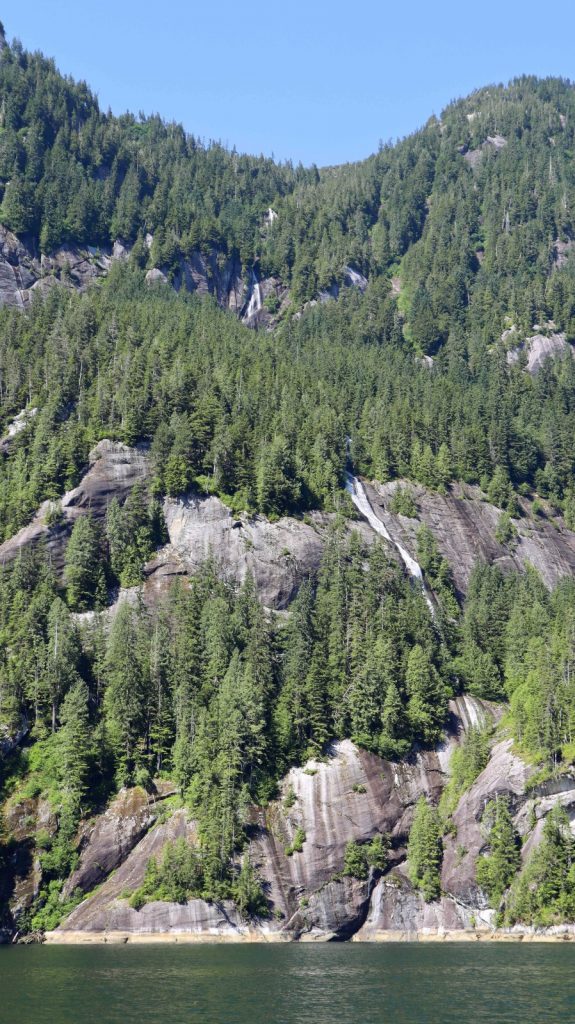 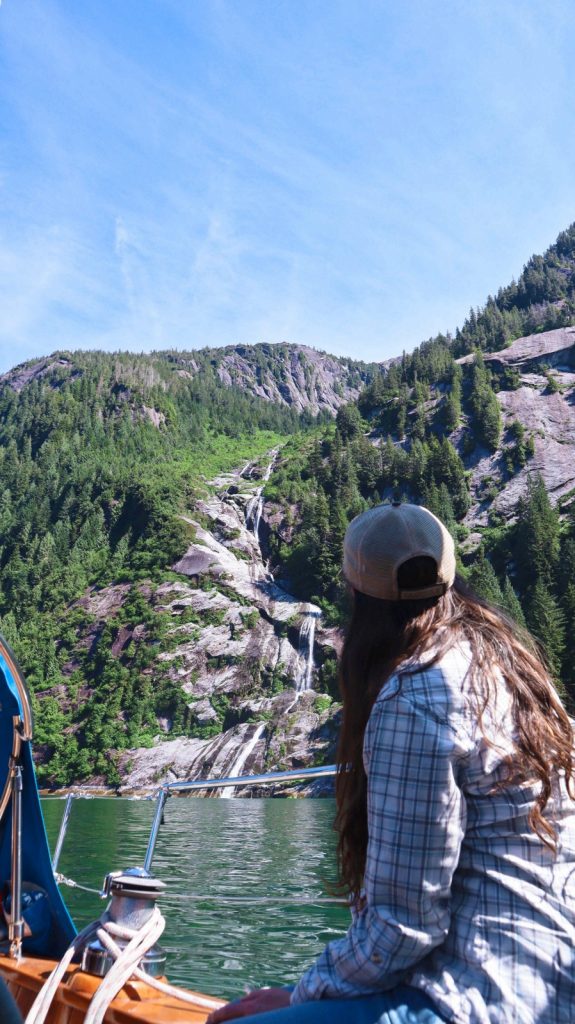 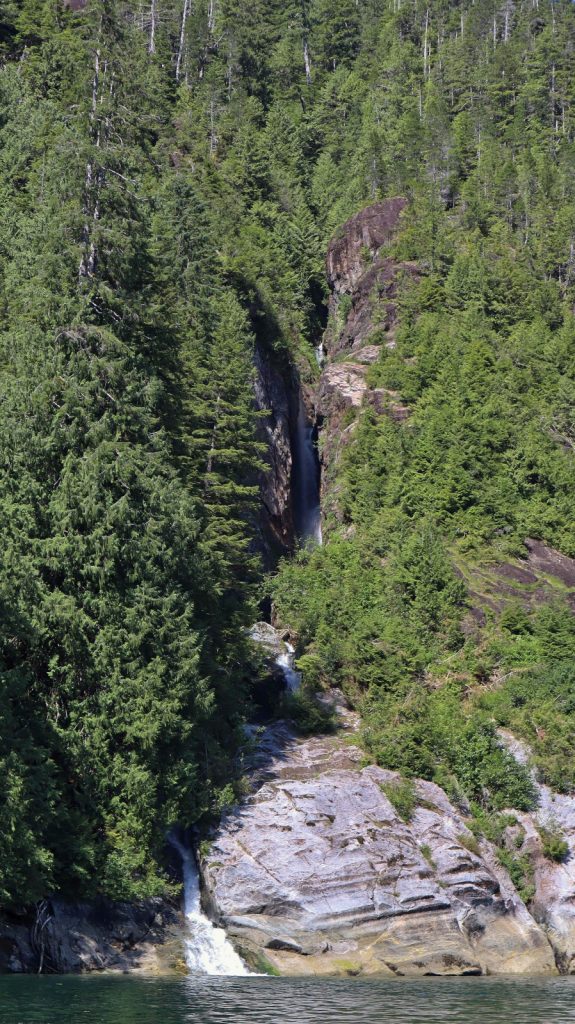 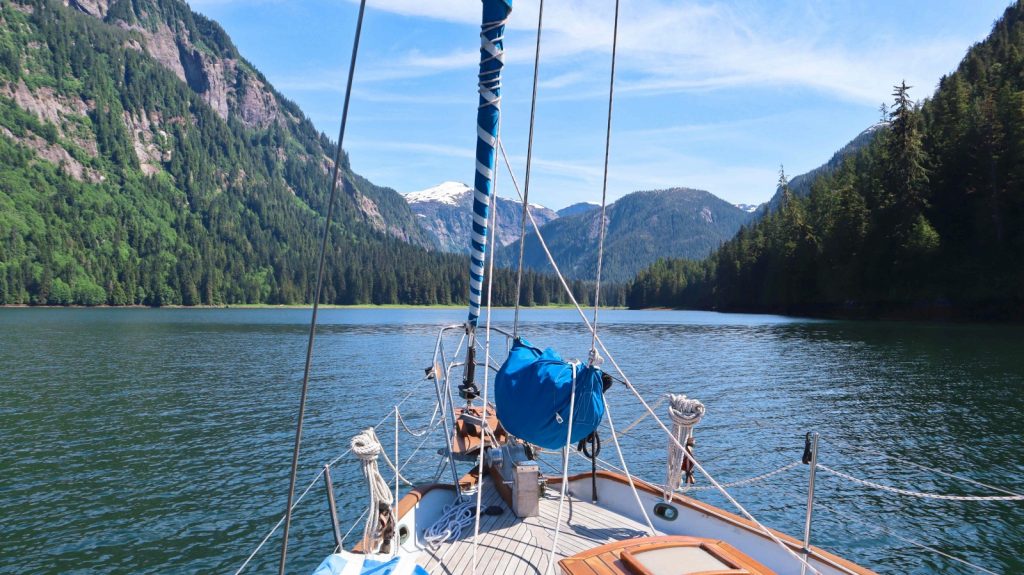 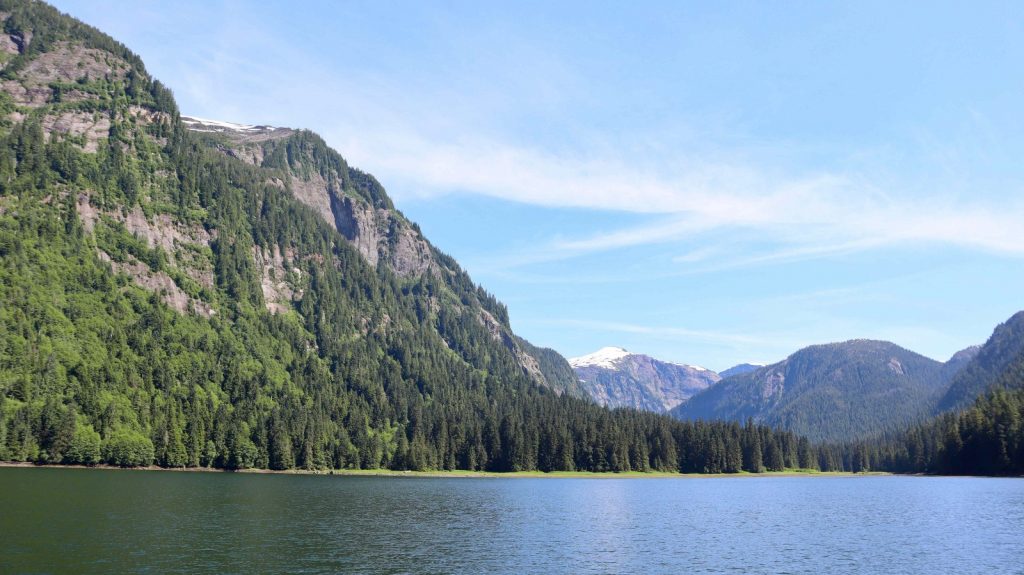 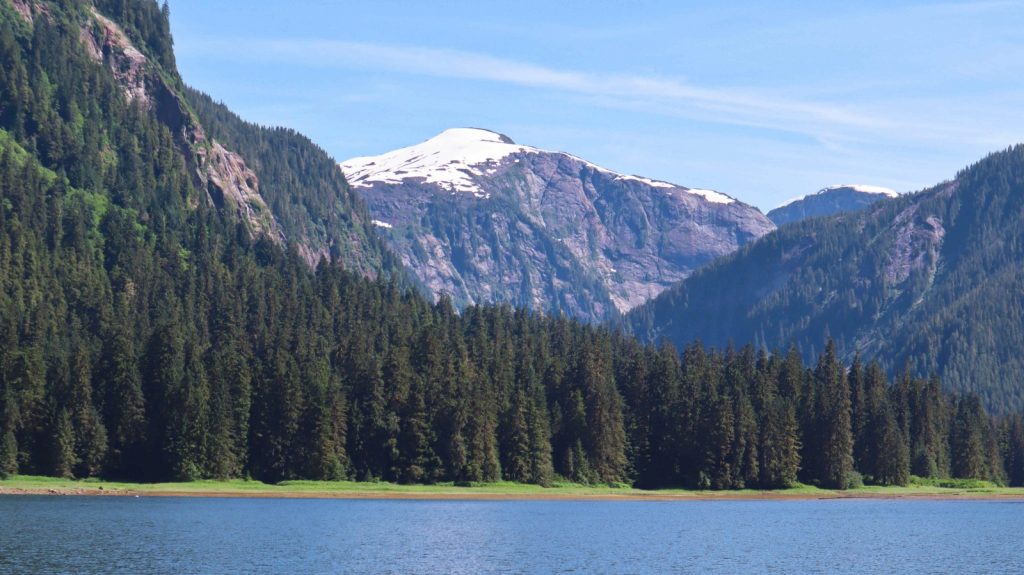 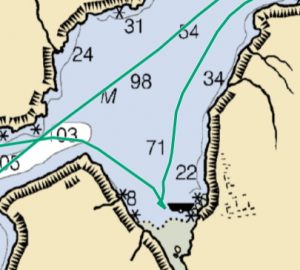 Lacking a telephoto lens, and with the bears barely visible through binoculars, we both wanted to get closer for a better view. I puttered Meriwether forward after glancing at the chart which said we had the depth for a good while. Kerri and I were talking bout the possibility of staying when I glanced at the depth gauge which read 24 feet… no 20 feet… no 16 feet… it was at this time that I reacted, taking it out of forward gear and turning hard starboard… 12 feet…  directly towards a clearly visible sand bank. So I turned hard left, but that added delay was all it took. Meriwether’s nose dipped towards the water as all forward movement came to a halt. We had just run aground for our first time.

Everyone always said, “it is not a matter of if, but when”, but I always refused the possibility of ever running aground. There was no panic between Kerri and I. At least it was obvious that we stuck ourselves in nice soft mud and not a mean rock. We both started the mental preparations on how to kedge out, but before we started any of that I decided to try what I thought would be a sure-fail; reversing out. It took some revs, but Meriwether puller her nose out of the muck and even reversed straight backwards instead of her normal random-direction. I kept backing up another hundred yards before turning the boat around. Neither of us spoke again about staying the night on the ball, which is closer to shore than where we ran aground.

It took another half a day of motoring to get to that night’s destination at the northern tip of Behm Canal; Fitzgibbon Cove. Another small cove with a tight entry, Fitzgibbon would be our first Alaska-deep anchorage. A normal anchorage in Alaska is much deeper than what we are accustomed too in the Puget Sound, and this was one of them. At about 90 feet deep we had to let out all 220 feet of our chain, plus another 80 feet of rope before we felt comfortable. This is only a 3 to 1 ratio (normally we want 4-5 to 1) but we had good protection from the weather and there was more than 500 pounds of anchor tackle in the mud. It did just fine. We slept well after the three long days of sailing and exploring. 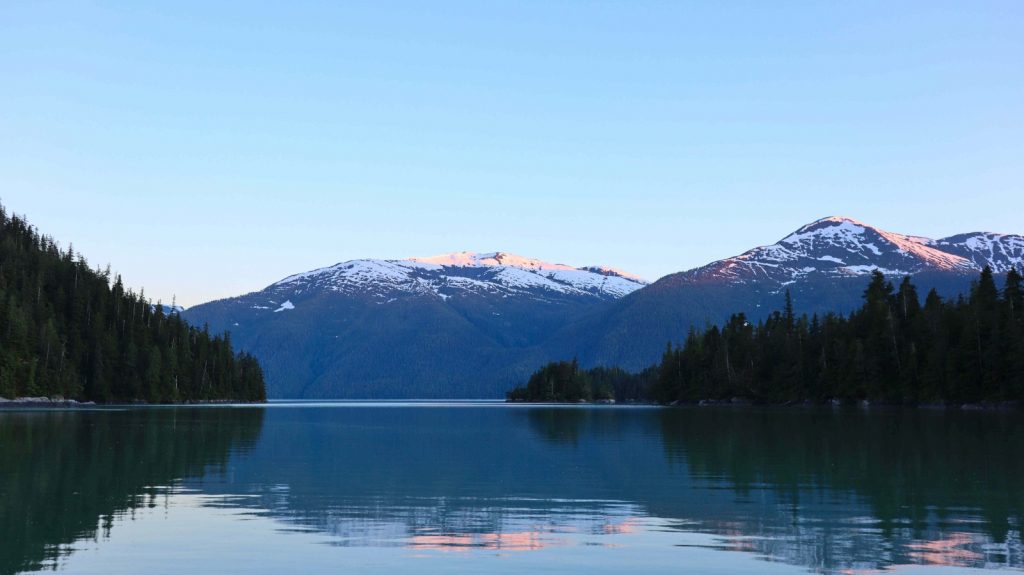 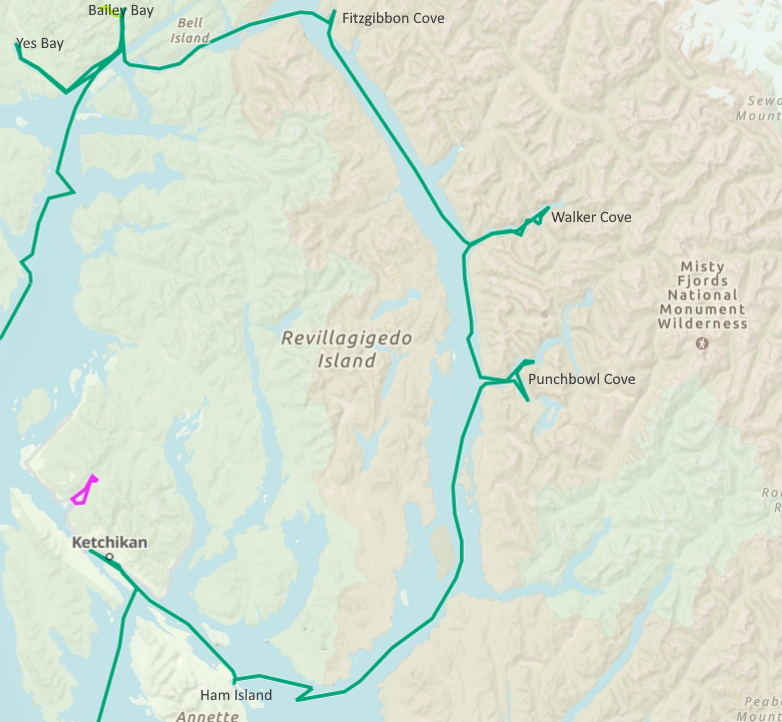 All in all it would take six days to circumnavigate Revillagigedo Island, half of which ran through Misty Fjords