It was early for us – with a 9 AM start to our sail – but we had the infamous Deception Pass to navigate and the current rules all when it comes to the timing of this small stretch of water. With slack-tide scheduled for about 10 AM, the penalty of arriving late would mean a strong current against us. As usual, it is my preference to arrive to any party on the early side, if only to avoid the stress of being late. Early, in this case, meant we had a current pushing us through the pass. 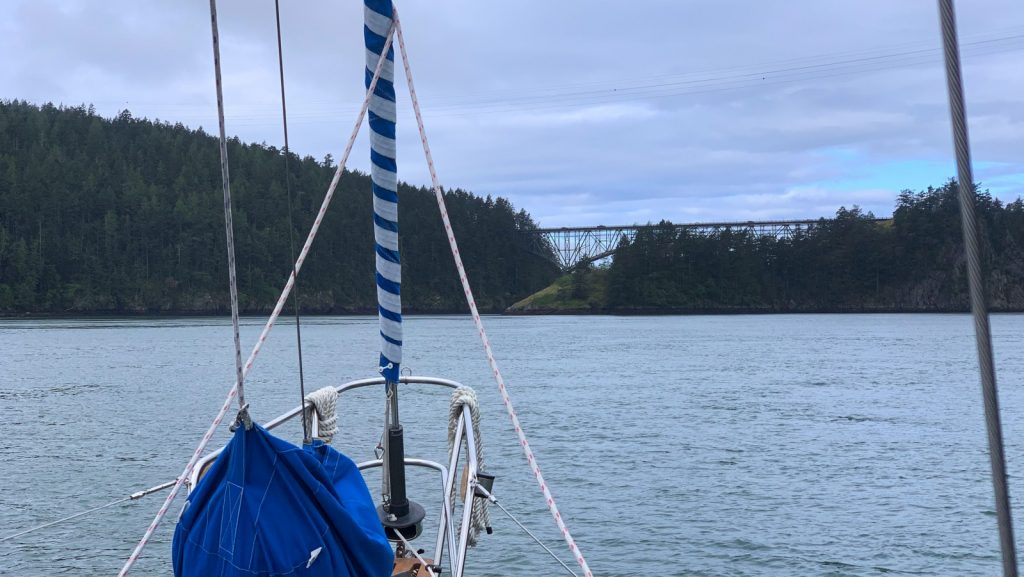 We punched out the west side of the pass and raised our sails as soon as clearing all the rocks and small islands. By this time we had only six miles left of the nine mile voyage, but we are always desperate to sail Meriwether as opposed to motoring. We wouldn’t get the luxury if having a lot of wind to get us to our destination, but since we left so early, there was no rush. What breeze we did have moved us along at a peaceful 2-3 knots. Time was even taken to practice a heave-to and a single-handed man over board drill (something we do not practice often enough). It was in that MOB drill that, upon hauling hard on the jib sheet, that I was launched across the cockpit and landing the small of my back hard on the opposite winch. It hurt real bad, and would only get worse in the coming days. I powered through the pain to successfully save the mock-Kerri (a large hunk of drift wood) in the water before turning back towards our destination of Whatmough Bay. 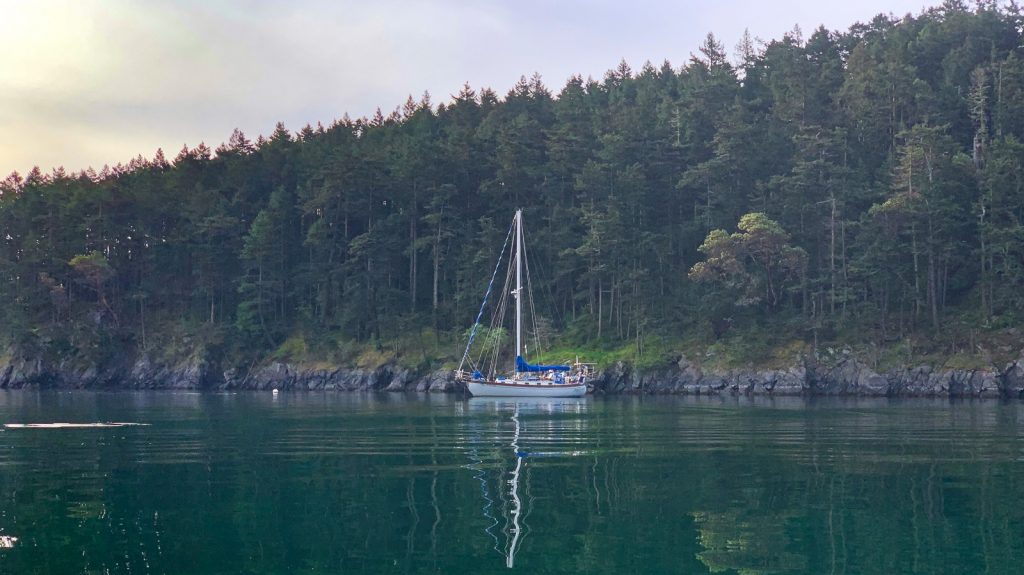 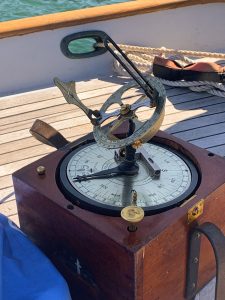 This super cool steampunk device did the calibrating of our compass

At Whatmough we had an appointment to have our compass professionally “swung” (calibrated). Our compass has always provided just a random heading between 0 and 360 any time we looked. Look again a minute later and it could/would be hundreds of degrees difference. An old school compass adjuster (a profession that has all but died off completely) and Master Captain was willing to meet us at the boat to complete the task. It took only an hour of pointing the boat in varying directions for him to tune in Meriwether’s compass to within 1 degree. It appears that someone, at some time in the past, took a small screwdriver to the adjustment screws for our compass’ magnets. I assume that person figured they were tightening the mounting screws, but the end result was a compass that tries to kill you. I am happy to report that is now fixed. 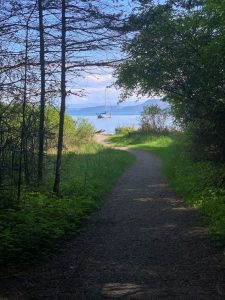 With my lower back in pain, little was done all week once we dropped the hook for good. Kerri took a few short hikes around the nearby trails while I stayed much closer to the beach. The weather, though forecast to be gloomy all week, was damn near perfect and it felt great to just sit in the warmth of the afternoon sun.

For the first half of our work week we would have the bay to ourselves, but towards the end of the week a couple boats would arrive in the afternoon and leave the next morning, repeating each day. It is still too early in the year for the party-boaters, so at least it was still quiet and relaxing even with the company. 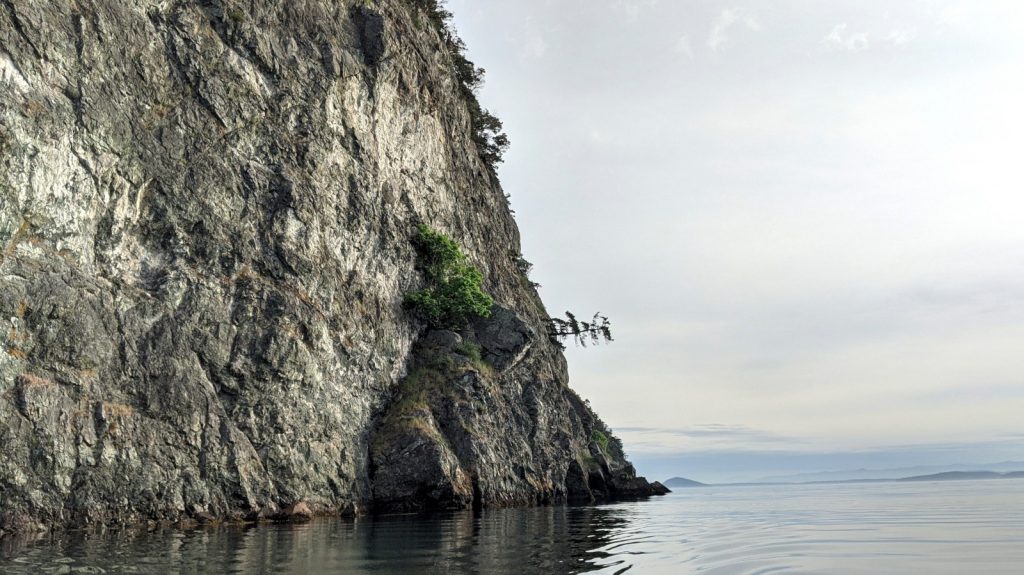 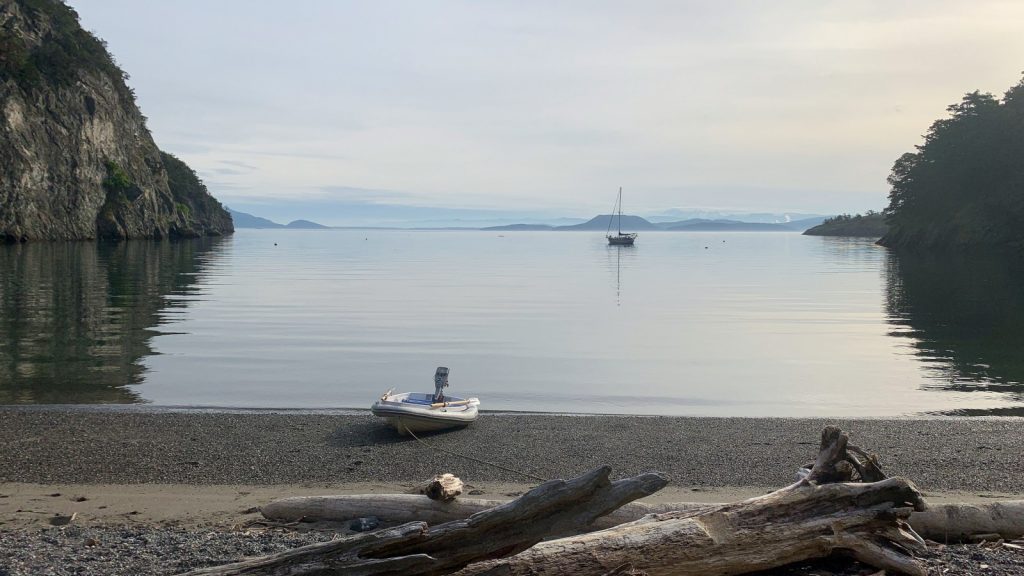