One more week on San Juan

We wanted to make the most of our final week before returning to a marina. Port Angeles – where we will resupply and wait for weather to make our big sail to Alaska – was our next destination. Port Angeles is 30 miles to our south-west with only the temperamental waters of Juan De Fuca between. It would be a long day sailing across, so we didn’t want to make it longer by moving further away for our final week. This choice leaves us with only the southern most tips of Lopez and San Juan islands, an area we have well explored in the past two years… or so we thought. 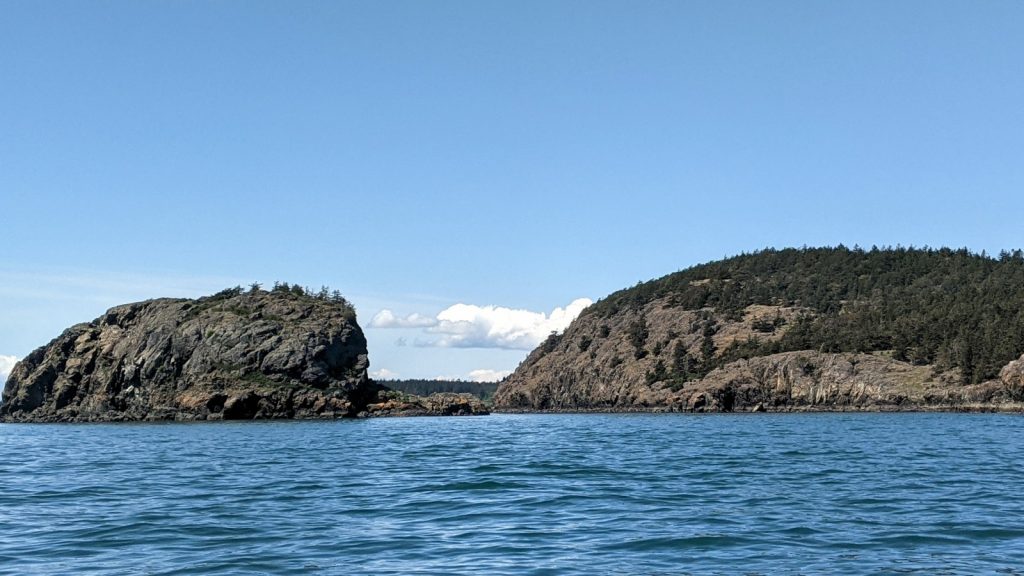 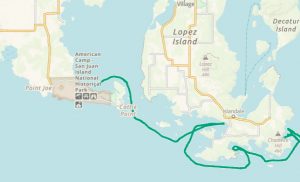 But first we needed to pickup some basics. From Whatmough Bay the nearest store to get the groceries we were in need of was MacKay Bay on the west side of Lopez. We would sail (motor actually) over there after vetoing an overnight stop in a smaller bay half way there. A single night was spent at anchor before we set off on the short walk to buy a $10 gallon of milk, eggs, and some much needed Oreo’s. During our short walk to a fro, we were reminded of just how friendly the people of Lopez are. The driver of every single car that drive’s passes makes sure to offer a wave. Not just a finger or two, but a full-arm-wave complete with a smile. They do it anywhere on Lopez and only on Lopez. 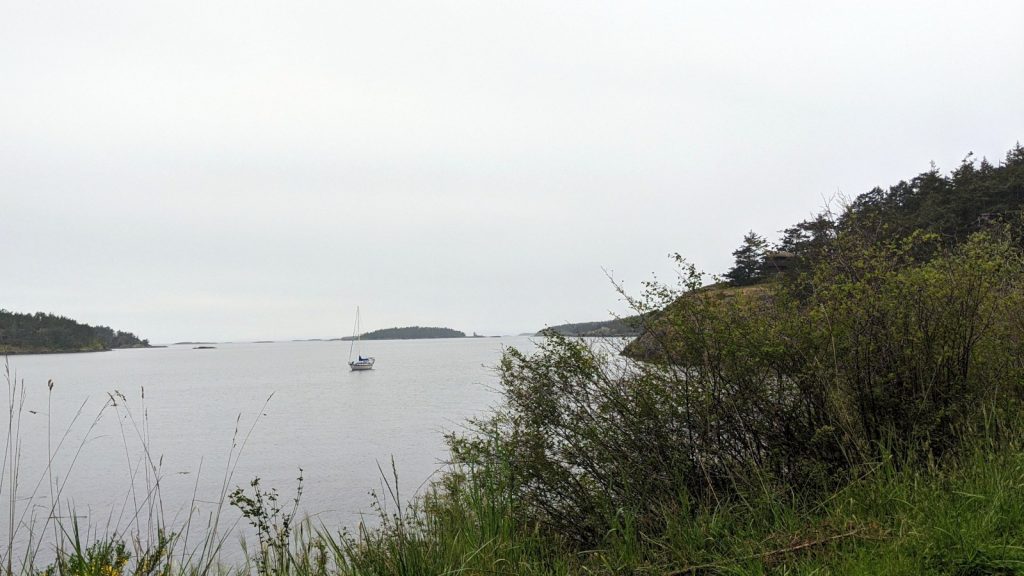 Leaving Meriwether behind in MacKay Bay 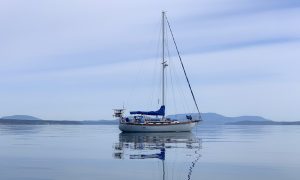 Initially the plan was to stay the entire week in MacKay, but with the cell signals not being up to snuff, we opted to try one other possible location not that far away; a large bay just north of American Camp on San Juan Island – the charts sure made it look like easy anchoring. A few more hours of motoring – against the current I might add – and we arrived, dropped the anchor, and settled in to our new home.

We still had a day before Kerri’s work week began, so off to shore for some hiking of the trails in the National Monument thanks to easy access via a huge beach. The forest here is simply amazing. Kerri and I both agreed that it may be some of the most beautiful and lush forest we have hiked in Washington. 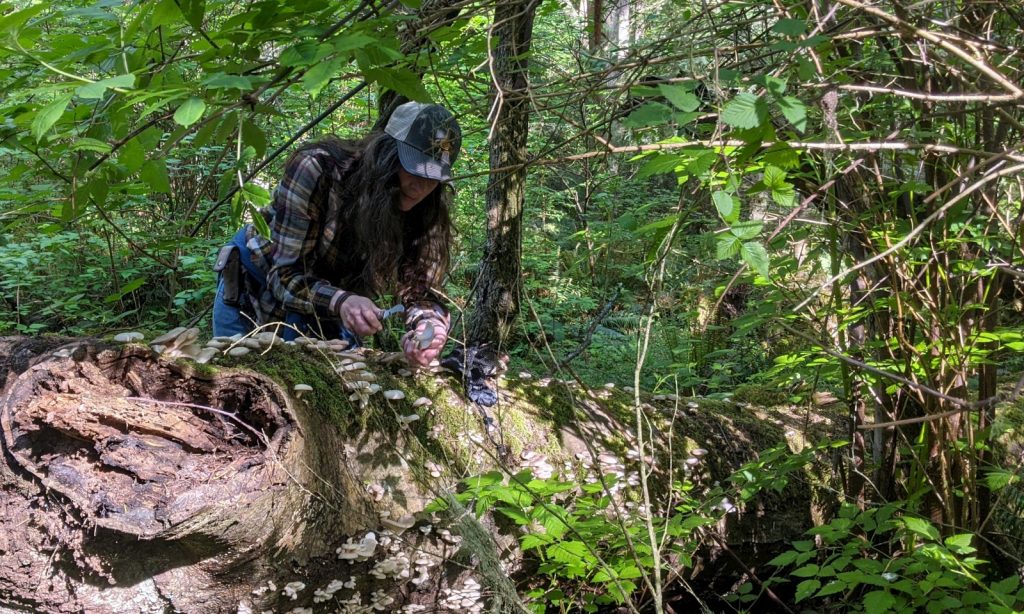 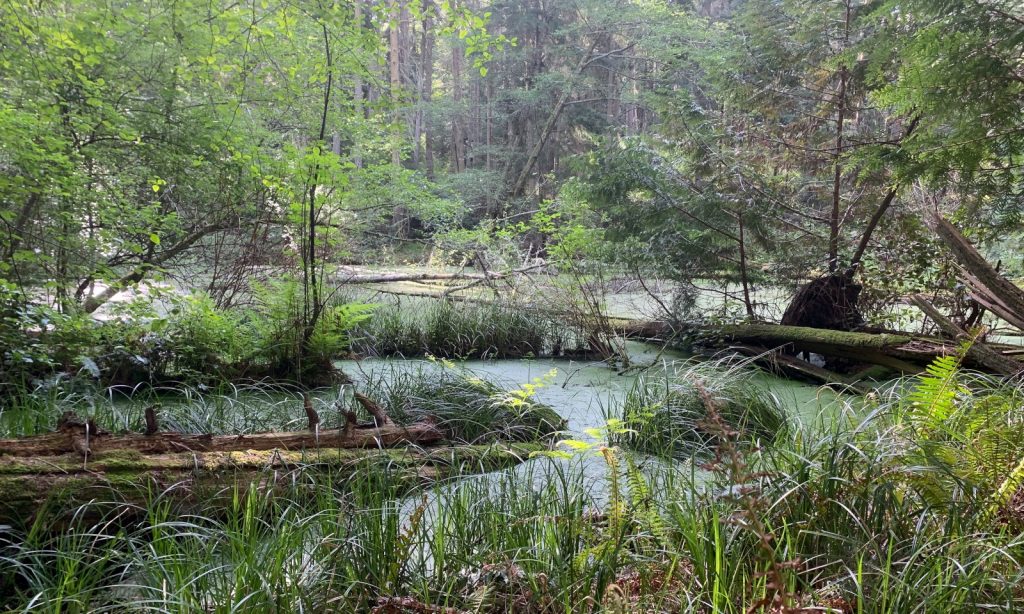 The winds would pick up through out the rest of the week, though we were protected by the island from the worst of it. Gale warnings rang up Kerri’s phone multiple times each day for the Straight, just on the other side of a thin protective shield of land. We did still have some 30 knots winds that made it over the land, but as long as the waters did not have the ability to build up, the winds were fine. We let out more anchor rode to account for the increase in wind speed and went back to work hunkered down below, not really coming back up until it was time to leave – early Saturday morning.