Once again we sailed off anchor. There was a breeze, so why wouldn’t we just hauled up the anchor and set a sail to propel us the direction we wish to travel, right? It’s quite easy actually, and a whole lot less stressful than the clackity old diesel that resides down below. Admittedly, I do still turn the motor on during this time – for Kerri – just in case we do something horrifically wrong. In all honesty though, we do not need the training wheels any longer and I will need to draw a line in the sand one of these days. Ironically enough, just last night Kerri informed me that she wished I would just leave the motor off during the sailing off anchor. I was taken aback. Here I thought she still wanted the added security, but she was clear, “we just don’t need it”. That’s what I get for making assumptions 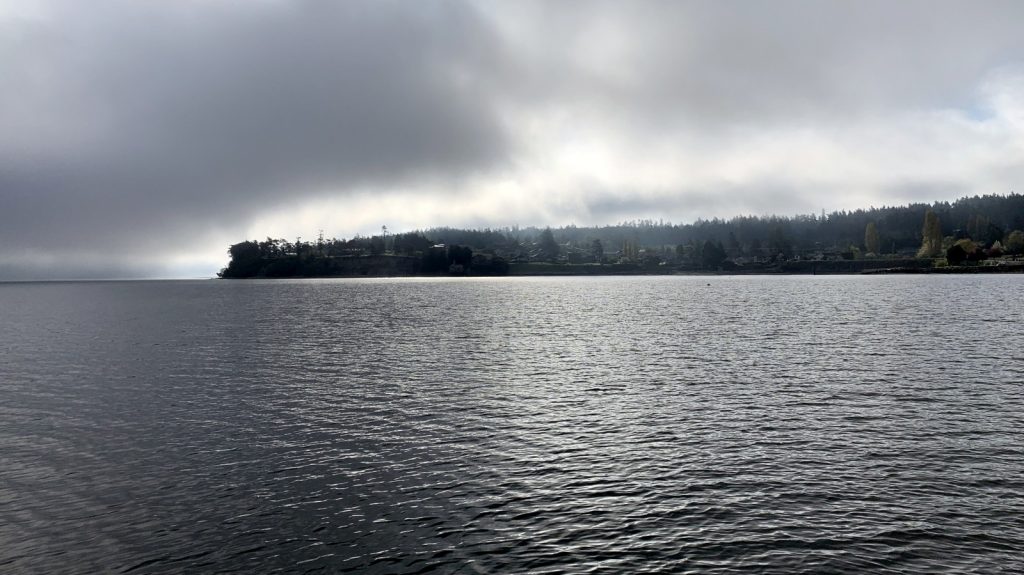 Coupleville (to the right) as we sailed away 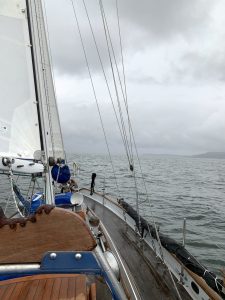 Another 17 mile jump is all we had this day. Wind should be on our starboard beam (right-side) for the first half of the distance, then as we turn to the port (left) the wind should then be astern (behind). For only the second time in all of recorded human history, the wind in the Puget Sound was as forecast, giving us an amazing sail out of Penn Cove and across Saratoga Passage. Our travels would have us follow the near-exact path as the sail in which we first flew our staysail, after leaving Oak Harbor back in 2019. Some time was spent tinkering with sail trim trying to learn a thing or two, but mostly we were just letting the autopilot do the hard work and we relaxed. We began to see a few white caps in the water, so we discussed slapping a reef in the main, but decided against it in the end. It turned out to be the correct call, as we would only hold that direction for a little longer before the wind would calm down anyway. Still, we got to sail 10 of the 17 miles this day, which I will take.

One might look at the images and see some miserable looking weather, and yes, it did rain the entire time during our sail to Skagit Island after leaving Coupeville. However, with the correct foul weather gear, it can be quite comfortable. Staying dry being the primary goal, our foulies do that job extremely well. Layers underneath keep us warm. As you can see from Kerri’s modelling (she had no clue I was snapping this photo), she can even keep doing her thing no matter the weather. She even went as far as to say she typo’s no more or less with the large gloves on – staying at a 95% typo rate no matter the choice. 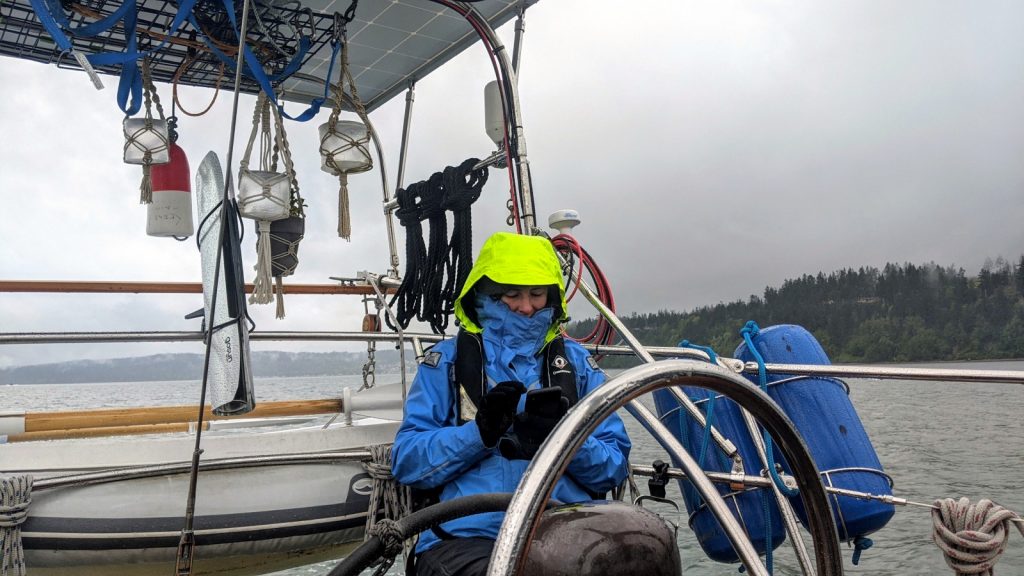 Someone with a keen eye may notice that we have made a change on our boat recently. The fenders (blue plastic blow-up bumpers) were relocated to the stern (back) of the boat from their year’s long location at mid-ship. We have only sailed a few times this year and already we had multiple occasions in which our jib sheets were getting tangled in the fender holders – even though this was not happening in 2019 or 2020. This means we can not complete a tack without stepping outside the safety of the cockpit to clear the jam. In heavy weather (which we expect in our travels this year) this can be very, very unsafe. So, functionality trumped having a better view while enjoying cocktails in the cockpit and the fenders were relocated. Personally, I like it better.

Once we steered north past Strawberry Point, the wind was no longer strong enough to move us at a rate we were comfortable with. The thought of raising the spinnaker sail (which would have been the correct sail for the wind speed and direction but takes a lot of work to deploy) made me cringe. With all the extra clothing on it would have been akin to having the Michelin Man rigging up the sail. And since it was already nearing 6 PM, we chose to chicken out, fire up Ol’ Clackity and “steam” the final seven miles to our destination – Skagit Island Marine State Park and anchored just off the north-east side of the island. 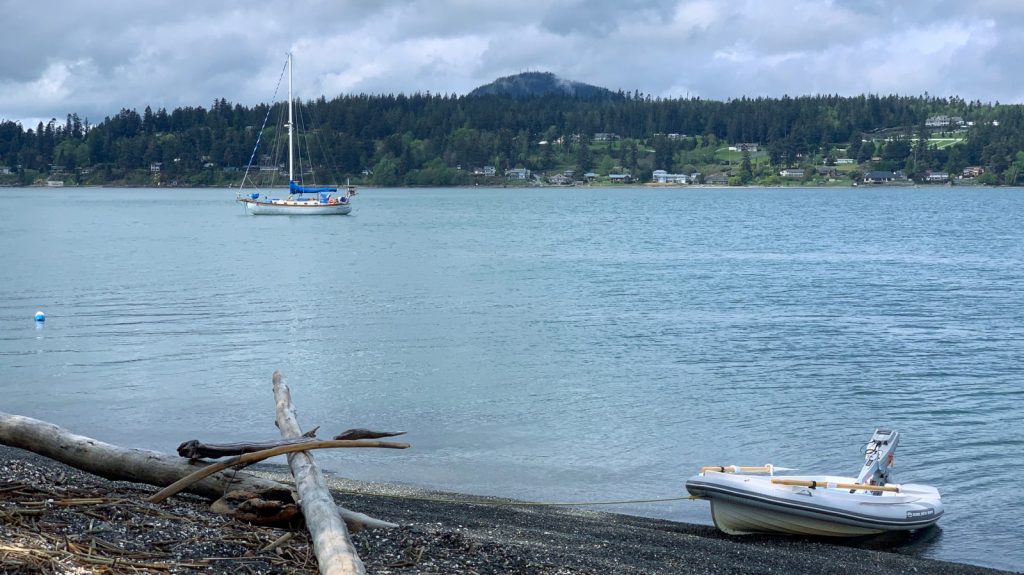 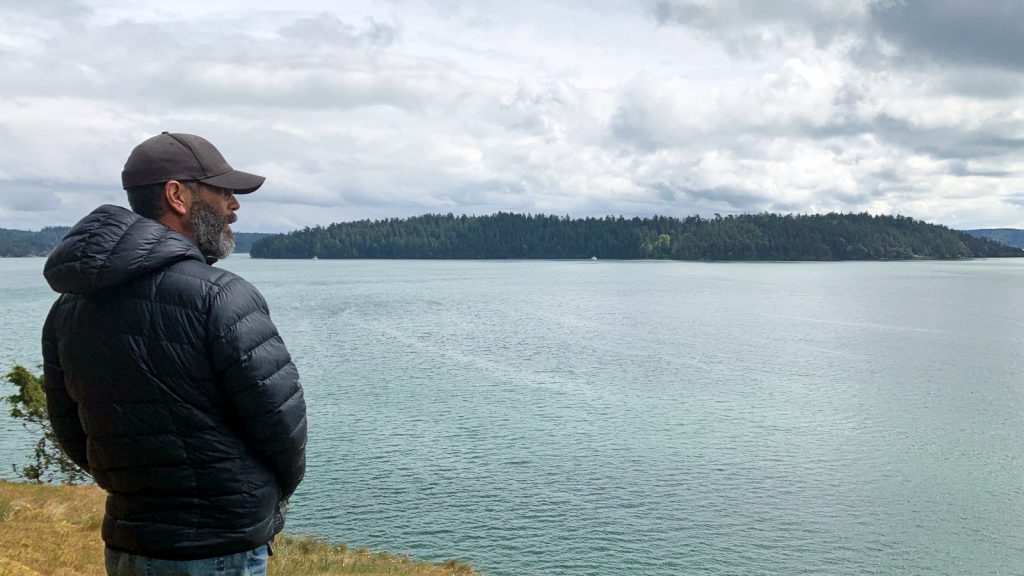 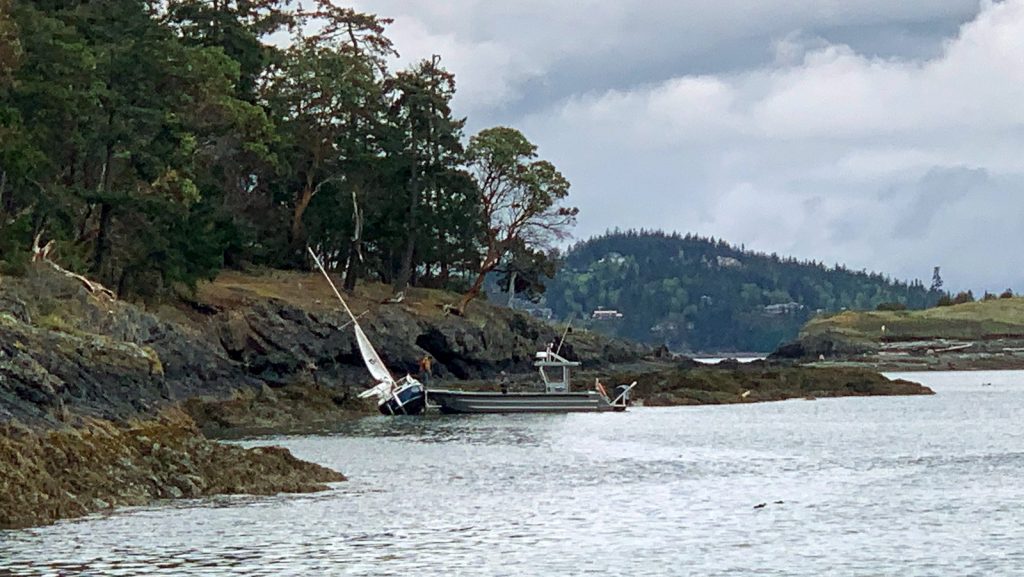 We basically took the following day off, doing nothing much else than a short hike around the island. The most exciting part of that – other than having the whole place to ourselves – was the recent shipwreck on the south side – a modern 22 foot sailboat resting up against the rocks; still in good shape (considering). Kerri took a couple photos and posted about it on Facebook, even hearing from the previous owner who basically said the new owner had pretty much abandoned it. Kerri reported it to the correct government agency in hopes that it could be rescued before it turned into an environmental issue. And the following morning, as we were leaving, we saw a crew out there trying to do what they could to pull the boat off the rocks.

We didn’t think there would be enough wind to sail yesterday, but we were able to sail over half the rainy way way from Coupeville to Skagit Island. (We could have sailed the entire way, but wanted to make it before dark, due to a late start). This is the first time since leaving Port Townsend that we haven’t been anchored outside of a tiny town. Here with a view of the bridge over Deception Pass, which we’ll be making our third (and likely last) transit through on Monday. 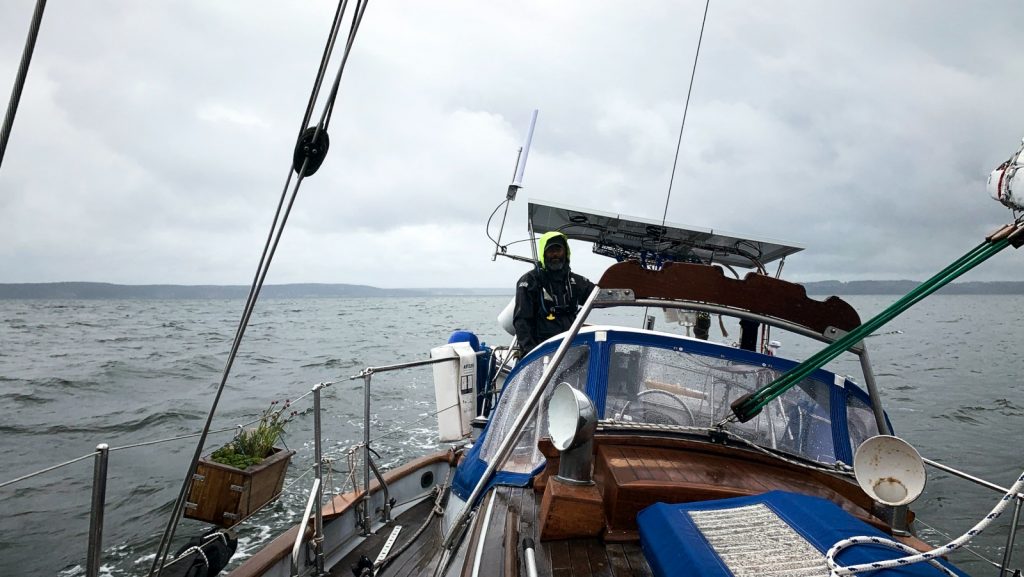 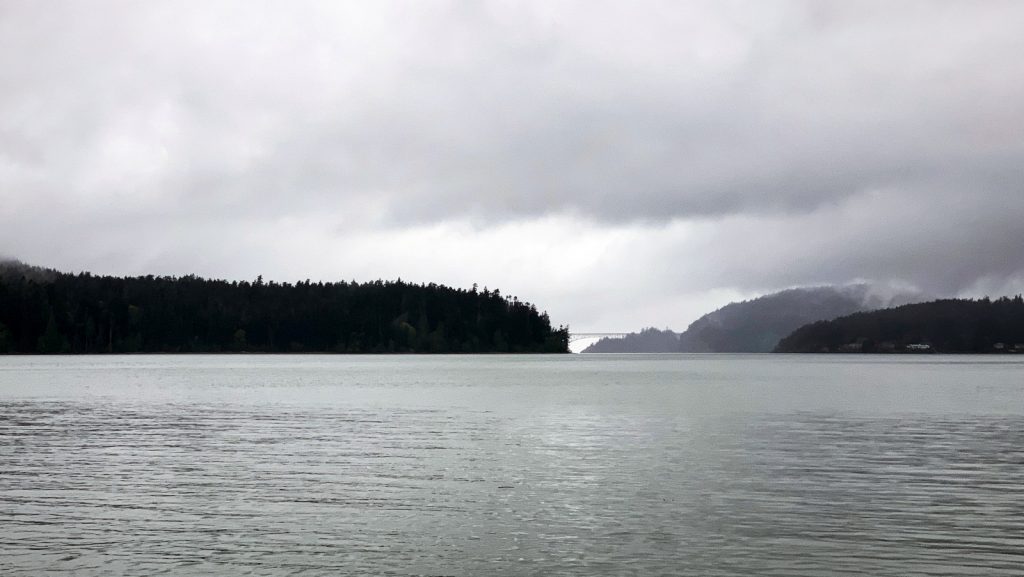