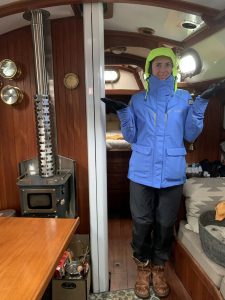 We bounced back and forth on a plan for the days leading up to our departure, eventually settling on going through the infamous Deception Pass (we camped/hiked/kayaked here a few years back) and out into Rosario Strait where we could catch the wind for a change. But first, we had to wait for the right conditions to navigate Deception Pass which is known for it’s very strong currents. Timing the passage to slack-tide and a current in favor of our direction (ebb tide for us) is quite important. That time would be the following morning, at a reasonable hour.

We left Oak Harbor on Saturday in the late afternoon after a visit to the fuel and pumpout dock once again. Amazingly, and no different to when we would dump the tanks in the Airstream, it is at that very moment (hoses all over the place, dirty hands, poop smell in the air) that a random stranger wants to walk up and start chatting. In the midst of pumping out and fueling up (yeah, that’s right I’m salty enough to do both at the same time now) he wanted to talk about teak decks, toilet systems, and the work he is doing on his boat down the way. Problem is, I had other things going on that required my focus, so I had to politely explain that I was a bit busy and now isn’t the best time for a chat. I’m not usually good at the polite thing, but I think I pulled it off this day. He didn’t curse at me as we walked away at least. 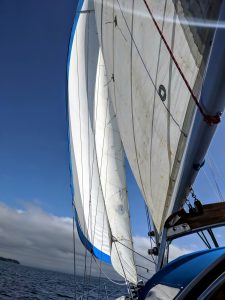 By 11 am we were on the water, heading out of the bay and into more open waters where we wanted to try something new. During our stay in Oak Harbor, I dug out and installed our staysail (1). Now with a few months sailing experience we both felt we could add the staysail to the arsenal. It is an extremely versatile sail so adding it to the lineup would benefit us greatly in numerous wind conditions. We didn’t have a lot of wind out on the water this day, but we raised all three sails anyway. It sure looked good. We have been sailing as a Sloop (2) for three months now just so we could get accustomed to sailing. Now, for the first time, we were running as a Cutter (3) and it felt great. For a while anyway. Eventually the wind would die off on us and we would be forced to drop all the sails and motor once again. 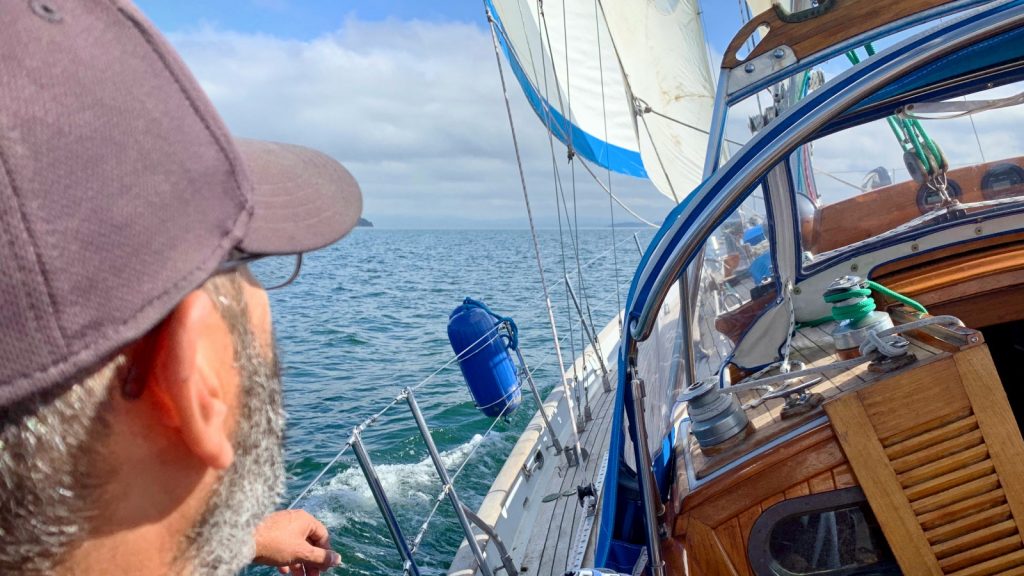 Another hour or so brought us to Hope Island Marine State Park, our destination for a single night’s stay. Here we would take up a mooring ball and wait until the morning’s slack tide to attempt Deception Pass. This gave Kerri her first chance since Port Gamble to head off on some mushroom hunting. Moose and I stayed back, as dogs are not permitted on the island, while Kerri enjoyed some alone time… a rare occurrence. 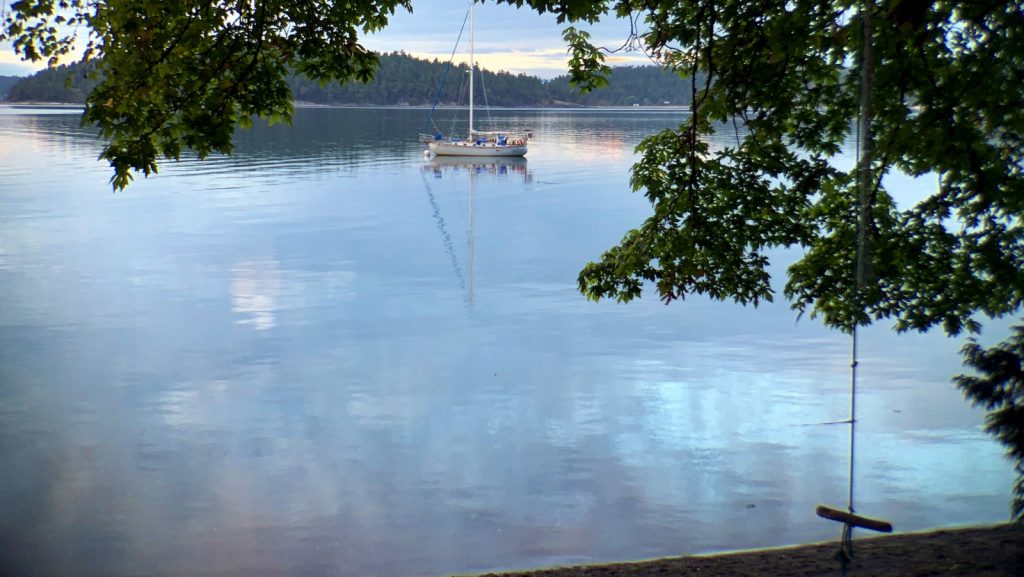 The following morning we packed everything up and started our way towards the pass. Only 45 minutes away we were able to leave just before slack tide. The weather would be on the soggy side all day long. Geared up in our foulies, the moisture barely effected us at all. Our first view of the quarter mile long, 180 foot high, bridge came about a mile out. 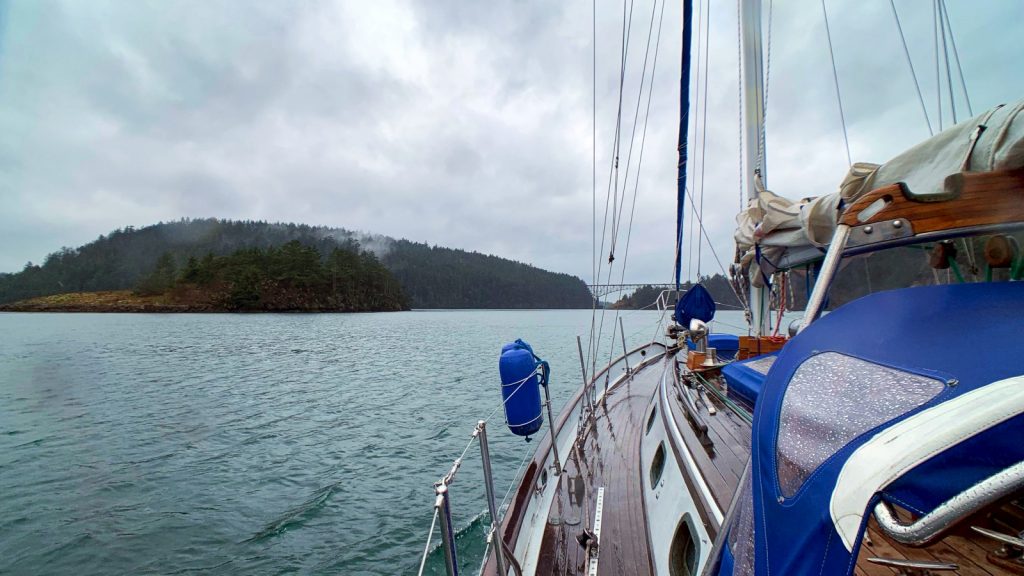 The islands on either side made for a very narrow channel (in boating definitions) and we had to navigate through it even with possible currents and eddies wanting to send us to a rocky grave. Alas, nothing dramatic happened as we passed under the bridge (our first time *under* one) as just a smidgen of proper planning negates most of the risk. We cruised through with no problems at all and continued on into the strait. 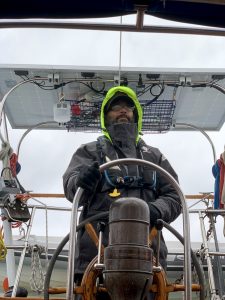 The weather forecasts nearly spooked us away from this path. For days they showed 25+ knot winds (and rain), from the south, in Rosario Strait. Since we would get to surf those winds down (a whole lot easier on the stress level) we chose to go for it. Unfortunately, once we were there, the winds never exceeded 16 knots which is not a very speedy down wind sail. Over the course of the next hour and a half, the wind would slowly die off to under 5 knots. This left us floating with the current (at least in the proper direction) where we finally decided to start the motor again to finish the day’s route up near Shaw Island in the heart of the San Juans.

1 – A staysail is the next sail back from the forward most sail, between it and the main sail on the mast. At roughly half the size of the headsail it works great as a heavy wind replacement for the jib, or to gain some extra boat speed during an up wind sail.

2 – A Sloop rigged sail boat has two sails (jib and main) and is the most common boat type.

3 – A cutter rigged sail boat has the ability to fly three sails (jib, stay, and main) which increases it’s speed