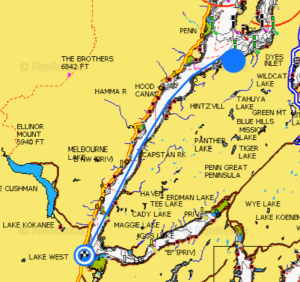 Instead of sticking around Seabeck for the weekend we left on Saturday – late morning, because Kerri’s necessary three hours in bed on her phone each morning can not be skipped. We were to continue south down Hood Canal to other adventures. There wasn’t really anything to do in Seabeck anyway, so the decision was easy. Plus, there were a few stops along the way further down Hood Canal that we thought we could overnight at to break up the sail into manageable chunks.

We motored out of Seabeck Bay at 11 am and once out in the canal-proper we shut the old Perkins down and raised the canvas to catch the wind. It was 24 nautical miles to our next proper destination, way down at the bottom of the canal. The wind was coming from directly where we wanted to go, yet again. That would prevent it from being an easy straight sail. We started the long day of tacking (1) and beating up wind. We are quite good at the whole process of sailing up wind and tacking by now – it being our state of sail 90% of the time. 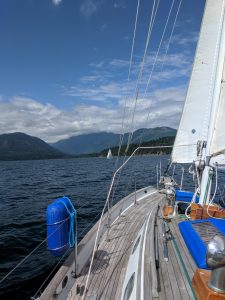 Only one other boat was in the canal with us and it was on the other side of the canal on an opposing tack – a mile or more ahead – appearing to be on the same plan as us. At first I brushed them off as something far enough away not to bother our sail, but after a few times tacking back and forth across the canal I realized that we were making ground on that other boat. A few more times across and it was confirmed, we were closing in the gap pretty quickly – for a boat. Now, make no mistake, this is a very slow process. Closing in a mile on another boat doesn’t happen in a few minutes. It was over the course of a couple hours, but eventually our paths were intersecting, with us both meeting nose to nose in the center of the canal. Meriwether was on a starboard-tack (2) while they were on a port-tack – which meant we had the right of way – but we gave an early sign to them that we would slip behind their boat as we crossed. It would be nearly a half hour before we were in the same situation but reversed – they now had the right of way. This time they gave way early (I do not know why they gave way, but they probably felt the same about us last time) and we crossed within a hundred yards of each other waving as we did so. We never saw them again after that as they turned to head down wind – possibly to go back home after their day-sail was complete. Meriwether, and her rookie crew, held their own in the up-wind sailing between these two boats. We were able to hold tighter to the wind than the other, making up the ground over time. It felt good… real good.

We continued on, alone now, tacking our way down the canal until we reached about a quarter of the way along our route. At that point the wind died down to next to nothing so we turned the motor back on to keep moving along. We knew the day would be long, so no need to make it longer waiting for the wind to play nice. We had already tacked seven times, so practice compete.

Just after we furled (3) in the jib (4) and motored for a few minutes, the wind made it’s return. We pulled out the jib and got to sailing once again performing another nine tacking maneuvers before the wind died off once again. Why not furl the jib in again? We did. And we started up the motor again too. We got places to be, and we were only half way there.

Not long after this, as we motored happily down the center of the canal, I had looked back and noticed some rippling in the water a few hundred yards back. “Hmmm, I wonder of that is the wind we just left or if it is coming at us…“. I actually said it out loud, to Kerri who them promptly distracted me with the tachometer doing weird stuff again (I know the solution, and have fixed it before, so WTH?). Before either of us finished looking at the gauge we got pummeled from behind (hey know… careful) by a hairy, tattooed, 22 knot wind gust. We have been through this before, just outside of Port Townsend, but this time instead of panicking we fired on all eight cylinders – making the right decisions, in the right order even. Kerri expertly positioned Meriwether into the wind while I double-reefed (5)  the main sail. The jib was still furled in, but to re-balance the boat we needed to let some out, which we did after turning her around again. Psht… no problemo silly wind! 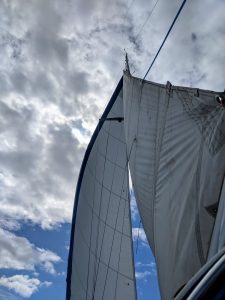 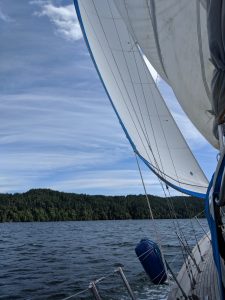 Finally, we would be getting in some proper down-wind sailing. And with 20+ knots of wind behind us, we were flying along at nearly 8 knots, even with greatly de-powered sails. While we have gotten some short, and mild-wind-speed, down wind practice in recently, this was very different. We both felt a bit of anxiety over the unknown, but took on the challenge like the badgers we are (grr!). Over the next few hours we sailed our asses off. Ten jibes (6)… ten! It took us ten jibes as we broad-reached (7) back and forth across the canal before reaching our destination. During those miles of down wind we tried a few different sail plans just to get some ideas and answers. Kerri and I disagree on what is best – or safest – but we learned things nonetheless. 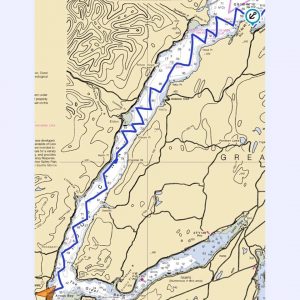 Our actual route, zig or zag?

Finally, approaching 8 pm now, we performed our final jibe, started dropping the sails, and motored in to our destination at Potlatch State Park where a plethora of mooring balls awaited our arrival. We picked up a ball on the first try, with an audience of one from a neighboring boat. We are pro’s at this, buddy.

It took us nine hours of sailing – and I am happy to report that eight of those were under wind-power – under variable conditions for us to get to our destination for the day. What was a 24 nautical mile route took us 32 miles of sailing to get there. All that tacking and jibing added some serious distance to the day, for sure. Even though we were exhausted to the core we felt good to have done it. Both for the experience and confidence gained from the exercise. It is why most sailors do not come down Hood Canal, it is a shit-ton of work. Sure, we could have simply motored 24 miles, but what fun is that? I even got Kerri to give me her first ever fist-bump… ha!

1 – Tacking is to change course by turning the boat *into* and through the wind. The sails will move to the other side of the boat

2 – A starboard tack is to have the wind coming from the right (starboard) of our boat, which pushes our sails over to the left (port) side of our boat. When two sail boats are going to meet head-on, it is the boat on a starboard-tack that has the right of way

3 – To furl in the jib is to roll the sail in on a vertically mounted drum (aka a roller furler), a mechanism controlled by a line leading back to the cockpit to easily and quickly drop the head-sail.

4 – Jib is one of the many different options of head-sails on a sailboat. It is the most generic term for those sails but does go on to have a very specific definition which I wont bore you with now. A jib sail is the forward most sail on a sailboat

5 – To reef is to reduce the sail area of a sail. For a main sail, it is pulled down to predetermined points built into the sail itself, and tied down. This reduces the surface area of the sail so less wind can act upon it, making for a safer and more comfortable sail in higher winds.

6 – Jibing is to change course by turning the boat *away* and through the wind (rear of boat facing where the wind is coming from). The sails will move to the other side of the boat

7 – Broad reach is a point of sail in which the wind is coming from the rear and slightly to one side. The sails are set as very far out from the center line of the boat.