We left Inati Bay after slightly more then a week there. We would head South to Anacortes for a couple day stay to resupply the fridge (already, I know) and get a few more items from a marine store for projects we came up with while at anchor during our first week. It wasn’t going to be the best day to sail, with moderate to light winds all the way there, but it would be pleasant enough for our first voyage to a whole new destination. This would be the first time we take our boat out of the greater Bellingham Bay area, and I was pretty damn excited about that. 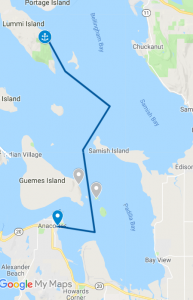 It isn’t a long sail, only 14 miles including the repeated zig zagging to sail into the wind, but we needed to navigate between a few bodies of land and dodge a couple cargo ships along the way, before making a hard-right around Cap Sante to get us into the marina at Anacortes. Of course, I called ahead to ensure there was a slip for us. The gal was nice enough to tell us exactly which slip we could pull into so we could plan the arrival path millimeter perfect.

What should have been a two and a half hour sail in the forecast weather, took four. The wind never really did drop by, leaving us to motor more than half of the trip. Each time we did get wind and raised the sails, it would die off again only a few minutes later, leaving us floundering out there. It is times like this where Kerri and I start pecking away at each other, nit-picking the other’s actions and getting on the nerves of the opposite. We need to accept that the wind rules out here and our schedule means nothing to it.

We were rewarded with some beautiful 15+ knot winds in the final 45 minutes of the trip at least, allowing us to sail into Fidalgo Bay and round the corner into Cap Sante under wind power. We did good… too good actually. By the time we brought the sails down and began motoring into the marina itself, we were under-prepared. Fenders, dock lines, and exact-path-to-slip were not ready, so I slowed to a crawl while Kerri scrambled. Not a great feeling – scrambling. My wanting to sail deep into the final nautical mile meant we got none of the docking prep done ahead of time. We both agreed that in the future we need to drop the sails much sooner when arriving to a location.

The docking went smoothly, even with a fair amount of wind coming at our nose. This we had experience at, so we nailed it like pros. We even had time to help a neighbor tie up as they arrived a few minutes later. No drama docking – that’s the way I like it. We checked in with the Harbor Master office, paid up for two nights, and immediately took Moose to the dog park. This was a completely selfish act, just so we could leave him back on the boat while Kerri and I took off to a favorite restaurant in town for dinner. It was here that I realized just how excited I was about pulling into a new marina as a full-time boater. I wanted to run up to any and all strangers and tell them what we just did, like a child – look what I can do! It felt damn good to be this excited about traveling again.

The following day was full; showers, black tank pump out, water refill, groceries, two marine stores, hardware store, complete the new projects, and visit that other restaurant we loved so much last time we were here. In fact, we did so much during the day that the sun set was quickly arriving and we hadn’t even gone to the grocery store yet. That task was pushed to the following morning so we could take the evening to relax and enjoy the town that we know already. Just strolling through the park and downtown areas as we act like tourists for a short while felt good.

After doing a complete inventory of all foods onboard, we created a list (actually, a spreadsheet… I do love a good spreadsheet) of all items we needed… then doubled it. The plan is to stay out at sea for two weeks at a time – possibly three – so we needed to break out of our normal shopping routine from the van, which had much less storage. We hadn’t yet utilized all the storage compartments in Meriwether, so we set out to buy extra dry and canned foods to store away. Our trip to the grocery store that last morning was a big one and we no longer have a vehicle to drive to a fro. While it wasn’t a long walk to the store, it would be a long walk back with ten bags of groceries. This is where a new piece of equipment in our lives came into play – a folding wagon. It carried the load all the way back to the boat which I had already organized to accept the large influx in foods.

We motored out of the marina before noon, towards our next destination, just like real sailors. There was no parade.