Hiking Stuart and finding our own cove

Outside of Prevost Harbor, just on the other side of Satellite Island is cool, refreshing, cell signal… or so we remembered from our arrival the day before. Over there, just a short hop away, we could anchor for the week in a small cove. While the cove would protect us from the scheduled winds coming from the south west all week, it was open to the larger body of water to our east, and all its traffic. There were also a few rocks hiding just under the surface of the water, and the depth of the cove would require some additional anchor rode to keep us secure. All of this we felt we could handle, so we set out that evening to to reconnoiter the cove on foot by motoring our dinghy to the island and walking the rest of the way.

The island, unknown to us at the time, is owned by the local branch of the YMCA. They use it as a stop during their annual kayaking and boating trips. A few camps are built up on the island where the youngsters would stay during their time on land. Trinkets and carvings from previous years were all over the place. Kids having these experiences really brings a smile to my face. Memories of my time at summer camp or a week long hike though Yosemite returned as I saw the YMCA camps.

The cove itself proved to be half-filled with YMCA mooring balls, but there was enough room for us to anchor between the balls and those pesky rocks on the other side. And the cell signal was blazing fast. We just had to motor over the following day and drop anchor… this time without running over the tow line of our dinghy.

Since it was the weekend we could still linger in Prevost Harbor for a while longer. This allowed us the chance to get off the boat and do a proper exploration of Stuart Island Marine State Park and more. Kerri, ever the researcher, found that there is a single-room schoolhouse up the road as well as a light house on the North West tip of the island. So, we set out to visit them both.

The 3.5 miles – each way – consisted of less than a mile of trail. Most foot steps were along the county dirt road that would lead us up a hill, past the school house, airport, and eventually to the light house. We would also stumble onto a nice tree swing, a treasure chest of honor system purchasable souvenir shirts, and an old, dead, car pushed off the roadway into the forest.

It has been a while since I set out on a seven mile hike, and I paid a price for it. Ever since I started working on the boat back in April, my knees haven’t been doing so well. The hike, though thankfully mostly on a road, put me down for the remainder of the day. Kerri and Moose both seemed to gain energy by the time we finished… not sure how that happens. 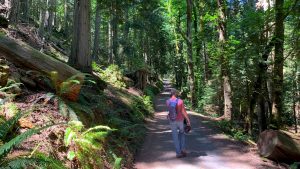 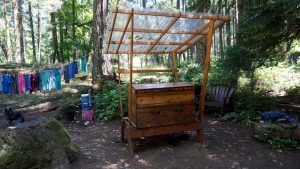 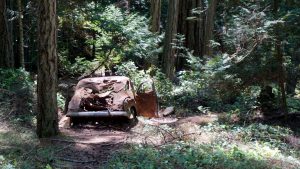 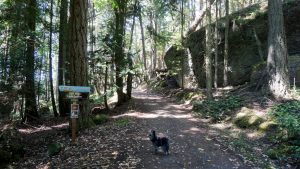 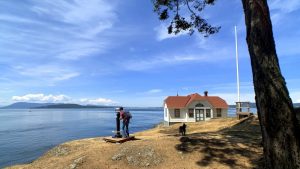 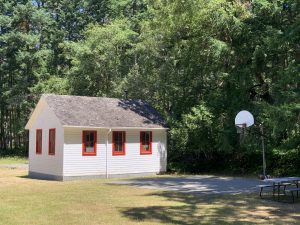 The following morning, now Monday, we motored and set Meriwether in place with 125 feet of anchor and chain before settling into our weekly – and much needed – showers thanks to the sun, and our solar shower. With the 5 gallon bag of water hanging from our boom, we could sit in the cockpit of the boat and get clean in this mostly-private cove. No other boaters were anchored on this side of the island, but a few do pass by to get into Prevost Harbor, causing Kerri to duck down once or twice while she cleaned up.

The rest of the work week was spent in the quiet rolling waters of the cove. It was a perfect place for us, and all our own. For the most part our only visitors were the bald eagles with a nest on top of the trees to our North, and a family of sea otters that had a den on shore. Moose was very happy to meet the otters one day during our twice a day visit to the beach. The otter-mom was not so happy about him of course. Late in the week a boat load of YMCA kids showed up and off-loaded onto their island. The peace and quiet was broken by kids laughing and having fun. Not such a bad thing if you ask me.