Clean water and a clean bilge

After a week stay at (and near) Stuart Island State Marine Park, we set about making our way to visit our third port as full time sailors. Friday Harbor is *the* town of the San Juan Islands, even located on the island with the name to rule them all – San Juan Island. Kerri and I have been here before via the van, so this returning on a boat felt special, to me at least. I can’t explain why, but it was something about a place that we both enjoyed in an earlier life that we get to enjoy again in this new life. 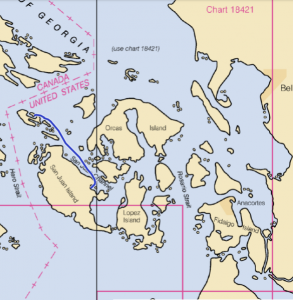 The trip itself was only 12 miles and fairly straight forward. Once again, we sailed the entire distance close-hauled heading as straight into the wind a somewhat modern sailboat can and will do. This meant we made good speed most of the time, but also meant the day was spent at a 20 degree heel. A few hours of that and we were approaching Friday Harbor, where the traffic on the water was the busiest we have yet experienced. Ferries, speeding motor boats, other sail boats, and even sea planes were all packing into this one mile or so of water making for some fresh excitement, or stress, depending on which one of us you are talking to.

We did have one gust of wind come hit us on our beam (side) that pushed Meriwether over to what felt like 45 degrees (probably only 25 or 30). We both gasped as water poured over the port side toe rail and onto the deck. I quickly de-powered the sail by turning the boat into the wind… directly into the path of an oncoming ferry (not to worry, it was still a half mile away). Kerri and I both knew we were in no danger of capsizing. The Baba is more than capable of handling a 20 knot gust of wind and a 30+ degree heel over, but we were both a little surprised by it in the moment. Kerri kept the main sheet in hand for a while after that to ensure we could de-power without having to turn in front of another ferry.

As we approached Friday Harbor, sails down and slowly motoring in, I got to use our VHF radio for the first time. Friday Harbor prefers incoming boats to radio in to get a slip assignment, so I did in my best no-I’m-not-new-at-this voice. A teenage girl on the other side of the air waves proceeded to assign me a slip and we took it with no real drama. We had only booked two nights in the slip as we planned to move out to the free anchorage for the rest of the work week. But, plans changed after a few revelations…

The first revelation came a few days prior when we were masochistic enough to pop the top on one of our fresh water tanks and found an entire ecosystem living in there. Kerri didn’t drink a drop of water for the next two days until she could buy some from the store in Friday Harbor. Honestly, we both figured the tanks were filthy but didn’t speak of it, hoping the lack of mutual acknowledgement of the problem would delay the job, which it did until now… now it was urgent. I spent hours cleaning out our port-side tanks before we even arrived to port. Once we had arrived in Friday Harbor we immediately opened the other tank and did the same. The tanks had to bleach-soak for 24 hours before we could purge that water and replace with with fresh water again. It took some serious effort, and a small amount of my blood, but at least Kerri can drink water again.

The second revelation – and the reason why went ahead and paid up for the rest of the week in a slip – came after we picked up some packages shipped into the marina ahead of time. One such package included a shiny, new, manual bilge pump (after a recent second rebuild attempt of our current one proved that it was proper-dead). I got straight to replacing the dead pump, went to test the new one, and nothing came out. Frustrated, I dug myself down to the bilge and raised the hose out of the muck to find one helluva surprise. The hose itself, a 2 inch rubber beast, had been sitting in oily filth for so long (likely decades) that it was mostly decomposed and had collapsed onto itself, sealing up the opening. Six feet of the hose lay at the bottom of our bilge, unable to draw in any water. I pulled up what felt like a human body part that had been sitting under water for a year… the slippery, fragile, flesh pulling apart if I tugged with too much force. I cut off the meaty parts – keeping only enough hose to still allow the pump to mostly function – and wrestled it into a trash bag as it transformed from dead flesh to a living and seriously angry python soaked in oil and diesel fuel.

I spent the next two days pumping out the bilge, a half gallon at a time. Nearly 20 gallons of water, fuel, and oil came out of the bilge before I saw bottom. Thankfully, the marina maintenance staff were helpful enough to loan me some larger buckets to haul all that filth to their holding tanks for it to be disposed of properly. Then came the job of degreasing as much as I could of what was left in there. It was a hot, dirty job. Mike Rowe would have been proud of me, for sure. In the end, we have a much cleaner bilge and just as important; a working manual bilge pump!

For me, the rest of the week was recuperating from those two jobs while trying (and mostly failing) to keep both Kerri and Moose happy. Our time at Friday Harbor was enjoyable with a bit of socializing, some shopping, and a few other projects being completed as well. The vibe of the nightly social hour was right up our ally. Each night, after a normal dinner hour (well before Kerri’s 9 PM dinner hour) everyone would sit out on their decks (or on the dock itself) and enjoy the slow setting of the sun. Everyone but me, I was usually in bed by 7 PM trying to regain some energy to do it all over again the next day. 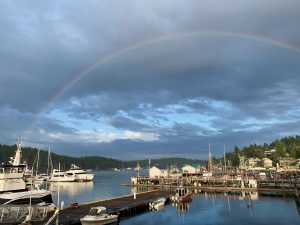 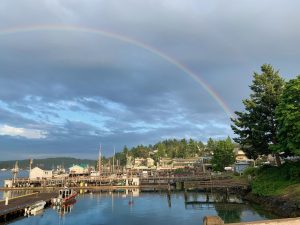