A return to James Island 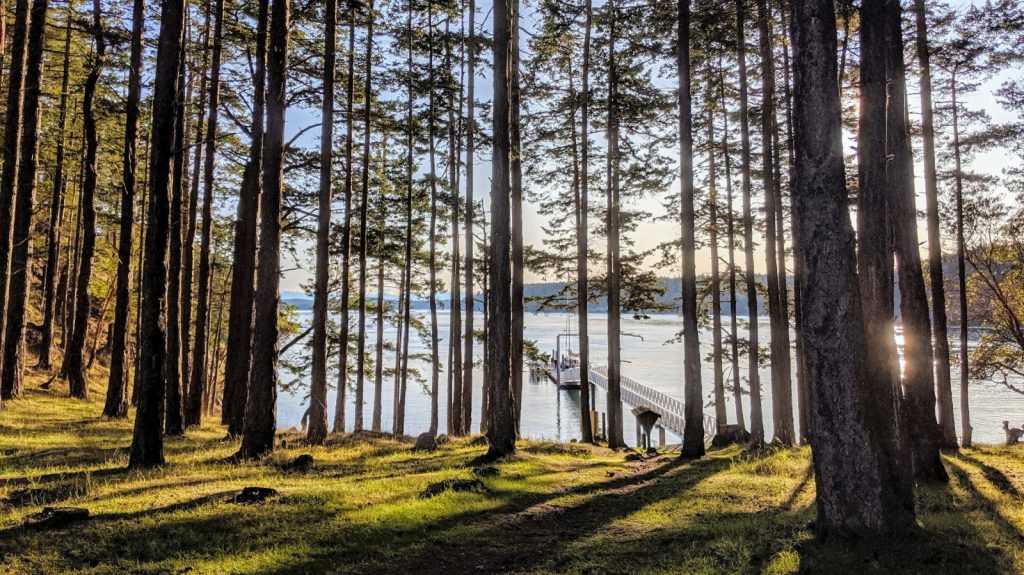 We didn’t have far to go at least, only two and a half hours would bring us to an island that we sailed (motored actually) past just last week. One we have already stayed at back in July; James Island. This time around, thanks to the wind forecast later in the week, we decided to stay on the other side of this small island. We remembered a boat anchored or moored on the other side, in a small cove. It looked like a great spot, so that was our aim. As we approached we saw no mooring ball, and Kerri’s quick review of the cove in the guide books showed the bottom wasn’t great for anchoring. Plus, these was a brand new looking dock not a 100 yards away. Using all the skills of a master-skipper I approached the dock and, in my saltiest voice, bellowed out to a fellow sailor tied to the dock to verify the depths. All was okay for us to join the dock party, so we called an audible and decided to go for the dock. This involved positioning Meriwether in the center of the cove while Kerri and I prepared all the dock lines and fenders. Of course, Meriwether attempted to dance around in the spiraling currents here, but all was under control. A few minutes later and we were pulling up to the dock – performing a U-turn just before beaching ourselves so to park behind the other boat, parallel parking style. Nailed it too! 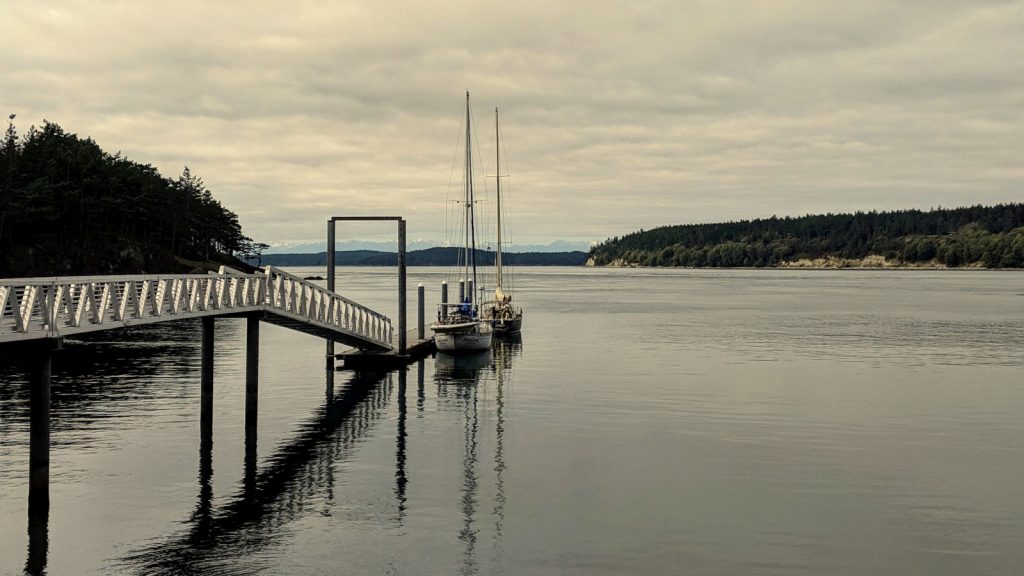 Not long after slipping under the blankets on our first night did I begin hearing little foot stomps up on deck. At first I thought I somehow forgot Moose out there, but upon realizing that he was not crying out in terror – as he would do in that situation – it must be some birds up there. Curiosity got the better of Kerri, who got up (always taking all the blankets with her) to peak out a port light where she was greeted by the face of a raccoon staring back at her. No less than three times the raccoons dropped in that night to see if there was anything to scavenge, making a bit of noise but causing no harm. 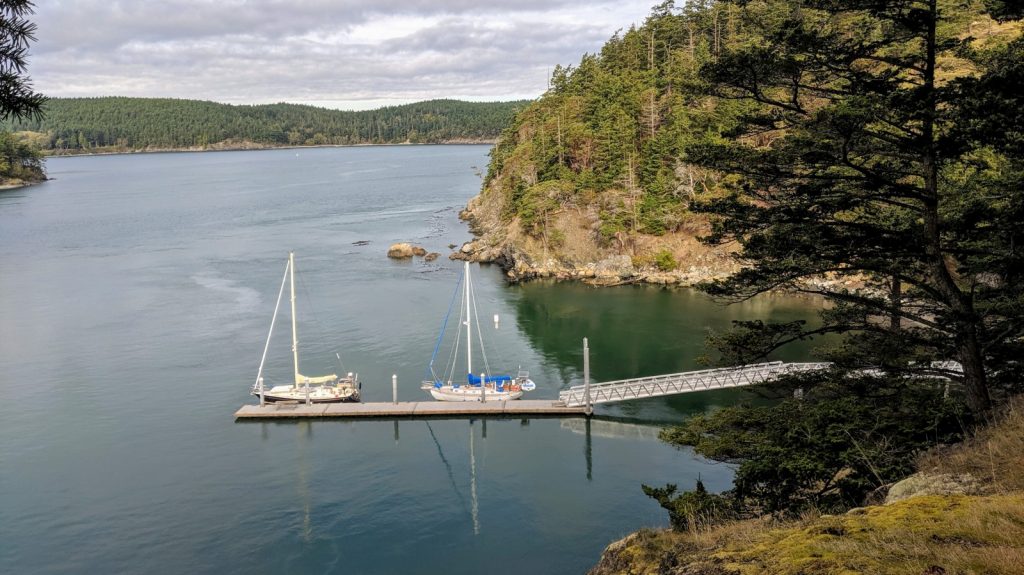 Most people do not stay for multiple days like we do. Most stay a single night – sometimes two – and move on. Each day the dock would clear out, followed by it filling back up by other boaters soon after. I happily helped (karma investing) a small group of motor boaters came in one afternoon. They were soon collecting firewood for an evening camp fire on the island. Me being the ever-helpful dude that I am, whipped out our new- and still completely unused – [battery powered] chainsaw to cut up some of the larger logs. This accomplished two things; 1) I got to keep some for myself as our wood stores were running low with these colder mornings, and 2) we got an invite to join them at the fire, which we did. It was only then that we had realized that we had gone the entire summer without a campfire on the beach.

Eventually that forecast foul weather came by to visit. Being tied to a dock sounded like a good thing, but we soon realized our mistake. Though we were protected from the majority of the winds, the waters were rolling a lot. Tied to a fixed object while the boat is bucking up and down didn’t work out all that well. Eventually the fenders popped out from between Meriwether and the dock and we crashed hard onto a very rigid dock – this happening in the middle of the night of course. Kerri and I both jumped up, dressed, and fought the boat back off the dock to reset all our fenders. This was made more difficult due to the current pushing the boat into the dock. Try pushing a 10-ton boat with your bare hands when the sea is pushing it against you. Ugh.

For our last two nights, we moved to the East side of James Island. Although it was real nice to have the dock (easy access for Moose and I), the cell signal on the West side of the island wasn’t so great. Since Kerri had a video chat call to contend with on Friday, we made the move.  We took up a mooring ball and enjoyed our two final days of solitude before heading back into civilization in preparation of the big trip coming. The waters were no less rolling, but with nothing to smash up against it didn’t matter that much. 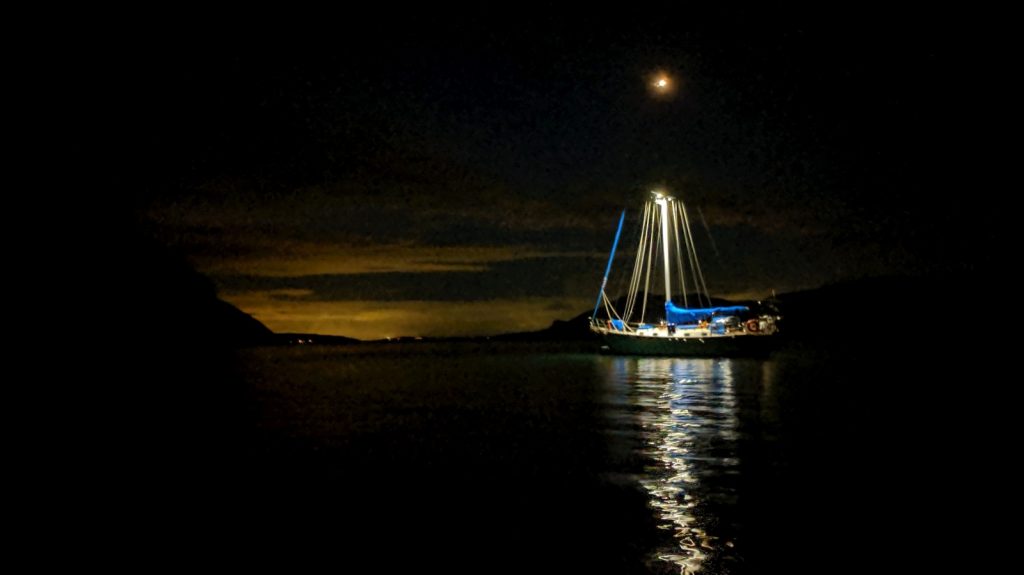