Gathering wood and being boarded

We couldn’t decide where to go after English Camp, ending up choosing a return to Friday Harbor to restock the fridge and firewood. The route would consist of a few miles backtrack and more motoring than sailing. We did get an hour or so of sailing in that day… close hauled, and tacking, of course – but eventually the wind would calm and we finished our voyage by motor. It does signify the only time we have sailed since leaving Bellingham, weeks ago. The wind is too fickle this time of year – it is depressing. 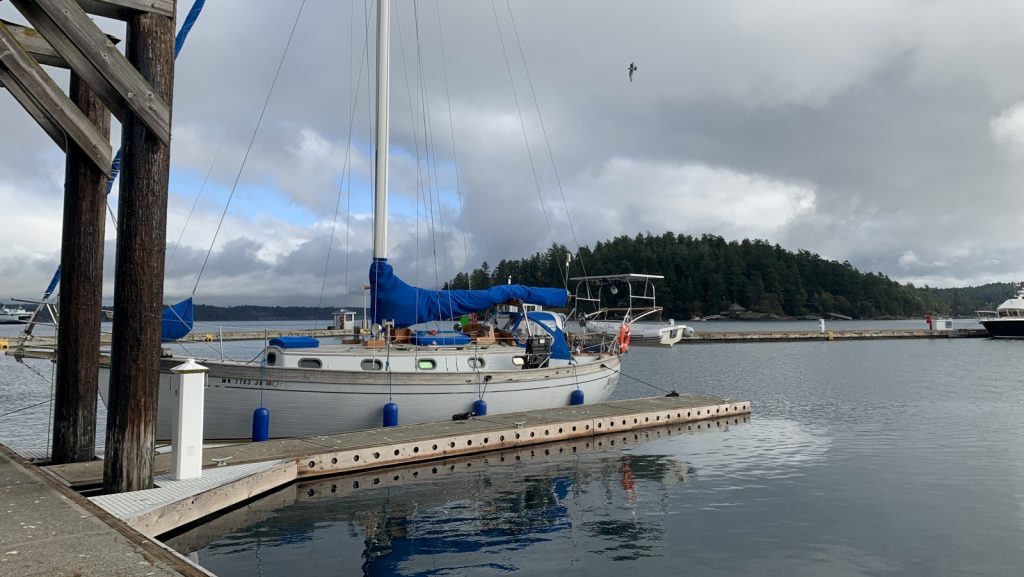 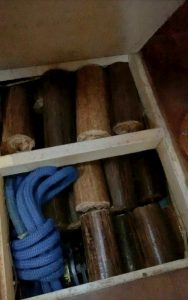 Friday Harbor was just a weekend stop. Originally planned for a single night, we spread out the chores over two full days and decided to buck up for a second night at the marina. Luckily, Kerri remembered that since it was off season, we would get a free night since we had stayed five days in the past. During our stay we made two trips up the street to the local hardware store. At said hardware store was a pallet stacked high with the compressed logs that we prefer to use, and they were barely over $1 each… an amazing bargain. We ended up buying thirty logs, (taking two trips in our wagon), enough to last us three weeks at our current burn rate. Somehow we fit all of these logs below our sole (floor), which is such an ideal place for them; very low in the boat and easy access.

We left Friday Harbor to motor (of course there would be no wind that day) across the strait to spend our work week in a new-to-us-bay; Fisherman’s Bay on Lopez Island. We chose it because we had no other nearby choices that we hadn’t already gone too, and it’s proximity to Lopez Village. Only 90 minutes later we had arrived and dropped anchor, only for it not to hold the sea floor. We tried again with the same result, so tried again for a third time only for the anchor to slip in the mud for a third time. It took a fourth attempt for the anchor to finally plant itself properly, making it our most difficult anchoring to we have had to date. It was then that I noticed that all four of our fenders were still down, which means we never raised them after leaving Friday Harbor, like complete noobs. Even though no one else was on the water to see our mistake, it was still embarrassing. 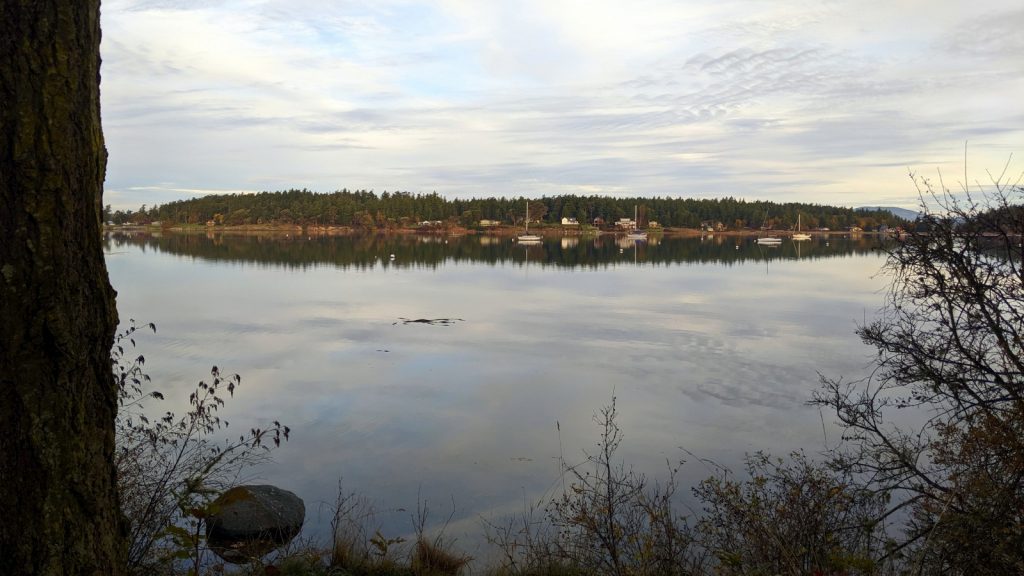 Fisherman’s Bay tuned out to be an uninspiring place to spend the week. We had to anchor so far from shore, and the place I could most easily get to shore was road-side. Moose didn’t have much room to do his business, and traffic was much heavier then you’d expect for the back side of some random island. The only real exciting thing that happened all week was being boarded by a sea otter who thought Meriwether’s teak deck was the most amazing thing (I happen to agree). She slithered and rolled herself all over the deck while we watched, and photographed, through the port-lights. 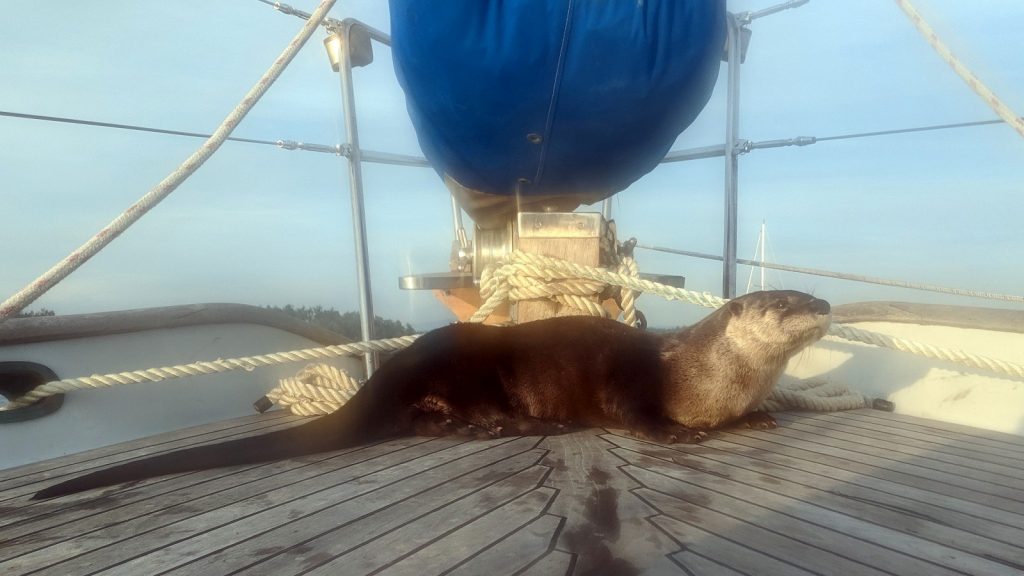 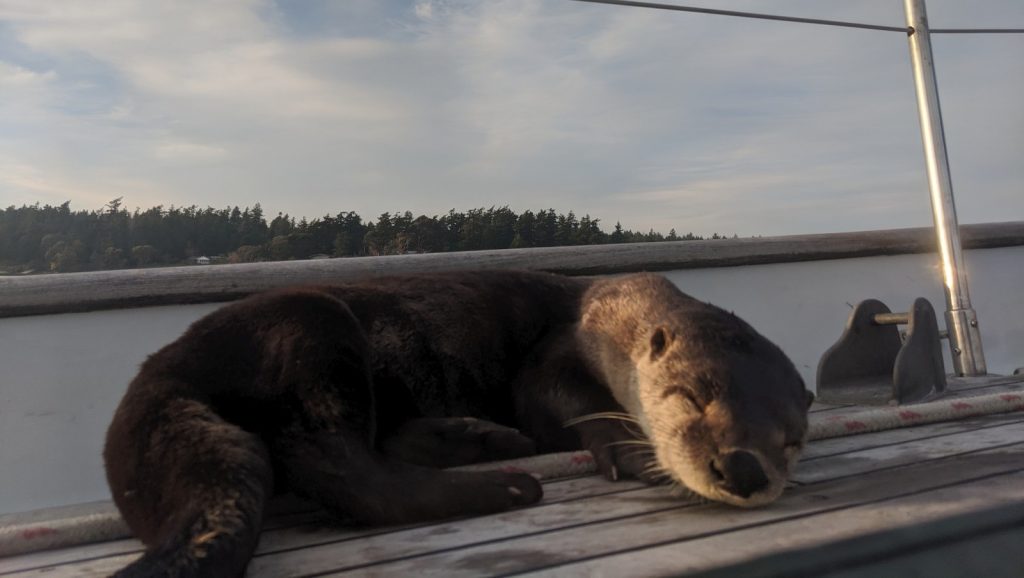 Towards the end of the week we ended up pulling into the local marina as some heavy winds were scheduled from a direction we were not protected from. Being at dock made it a lot easier for Moose and I, but in the end it turned out to not have been such a big deal. The wind that did arrive wasn’t as bad as advertised.

By the end of the week I was happy to get moving again. While not trying to talk bad of Fisherman’s Bay, it is here that I began feeling the need to move ourselves back into Big Blue and get the few months of van living started. If it weren’t for the wood stove, I’d have already demanded to be off the boat and driving south. The wet-cold is miserable (Moose and I must endure it multiple times a day while Kerri stays in and warm), and the sun can’t charge our batteries enough, preventing me from getting any work done. Yea… I’m ready to go. Can you tell?