We were off to Port Ludlow where we had a slip reserved and packages were already in route for a week of projects on Meriwether. The sail was pretty straight forward; loop around Marrowstone Island and head south to Ludlow. The tide/current would be in our favor – or so the information said – so the day would be smooth sailing with nature providing us a push from behind. The wind, however, wasn’t going to play nice that day – blowing pretty much exactly from the direction we needed to go, meaning we would spend the day close-hauled (1) – as usual.

As the crow flies, our sail to Port Ludlow was practically walking distance (for someone else, not me). Converted to a sailing route, the path extended to just under 17 nautical miles. Converted yet again to what we actually sailed, and you have just over 20 miles traveled for the day, which is fine by us both. We both agreed that we’d rather sail for a longer period of time that day than motor the distance. 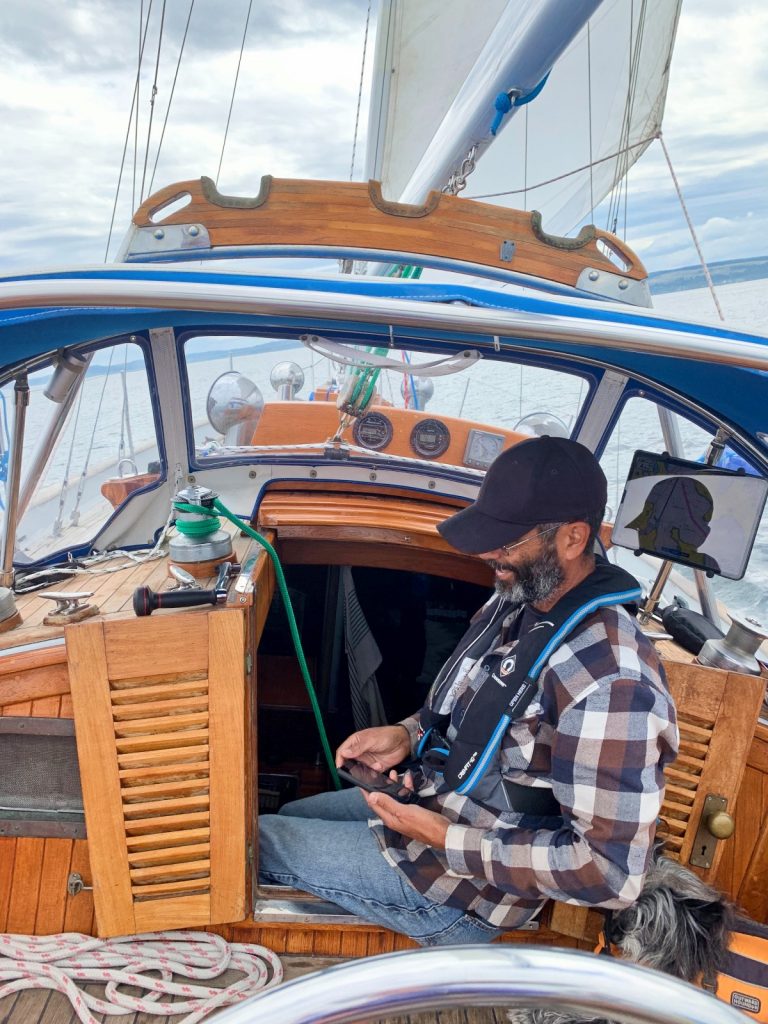 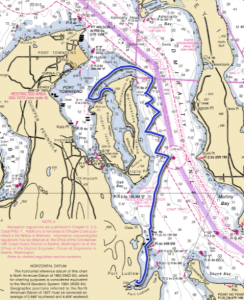 Our day started quite leisurely, with a late morning departure to ensure we took full advantage of the flood tide yet ensuring arrival before the ebb tide began. It still took 30 minutes just to motor out through the S-shaped channel from Kilisut Harbor into Port Townsend Bay, but once in open water we quickly raised the sails and shut the motor down. Kerri took the helm while I managed the lines and just generally tried to keep myself occupied. I was still hoping that once we crowned into Admiralty Inlet the wind would shift just enough in our favor. It did not. We would be stuck beating against the wind (2) for the majority of our day. Tacking (3) would be the skill to be practiced this day, which is fine by me. We were both getting noticeably better with each tack. 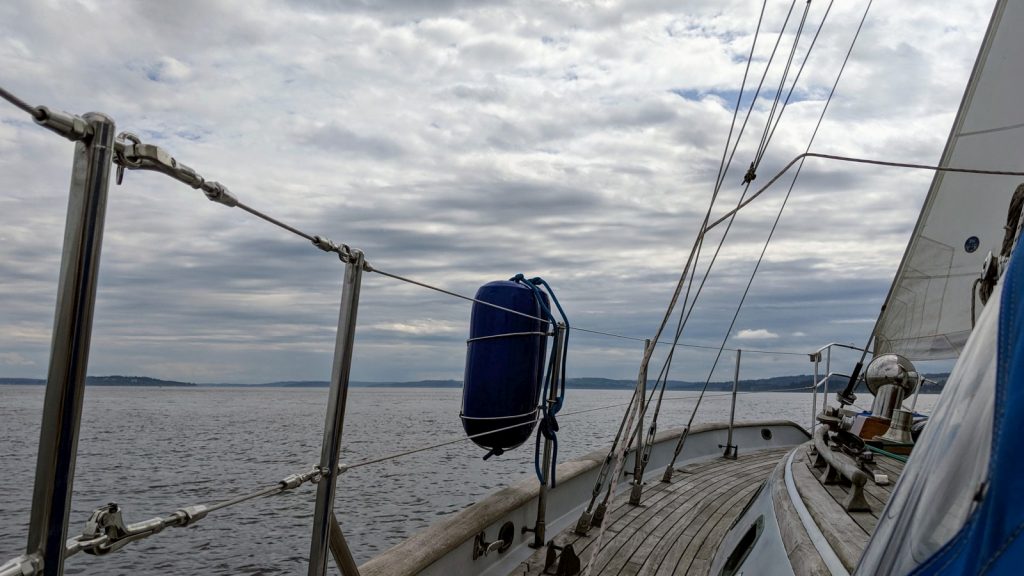 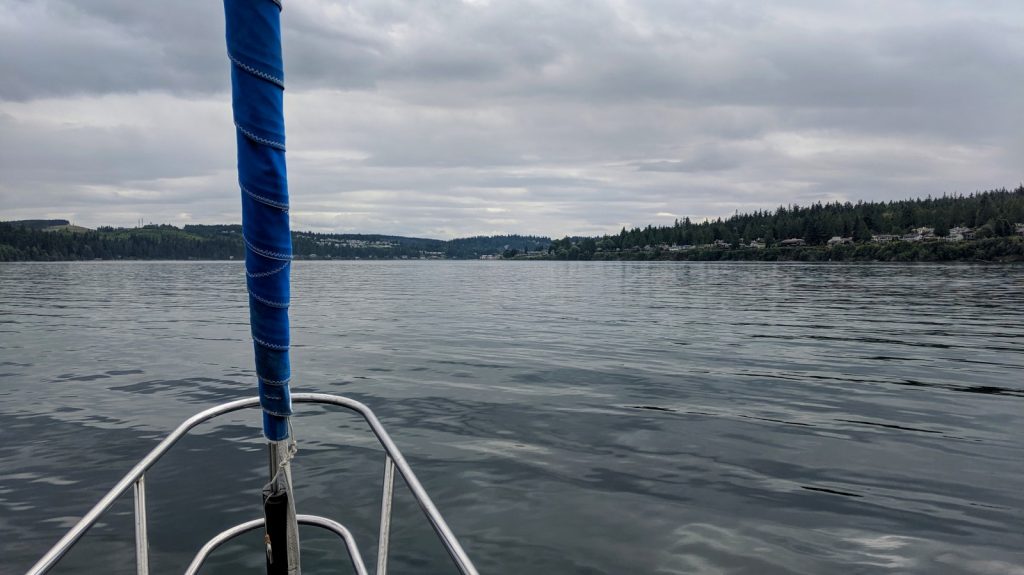 A few miles out of Port Ludlow the wind would die off to just a slight breeze. We had inertia and the gentle blow keeping us moving at a crawl. It was an extremely peaceful time, with little sound and glassy waters. We rode that for as long as we could… we were not in any rush at all. Eventually, we began to drop the sails, which was nice to do in the calm and silence for a change. We took our time, flaking (4) the main sail as best we can and even getting the sail cover in place well before turning the corner into the marina. That half hour of calm water and wind is how all sails should end. It sure made the docking real easy too. 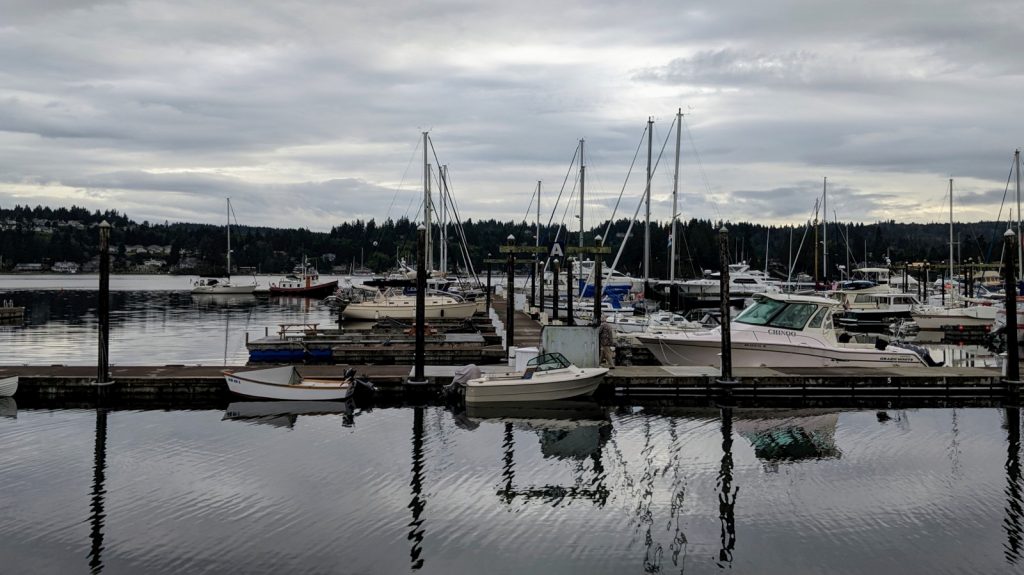 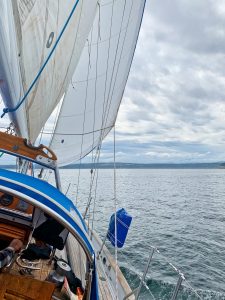 We had the work week to hang out and get a few small projects done on Meriwether (a never ending list does exist). At least they were small and simple projects that I could knock out a few a day, including a scheduled oil and filter change on the old Perkins. Still hunting down an engine heating issue, I had the safety of port to change out the engine water pump, which resulted in all new coolant as well. Each new item makes Meriwether a bit more reliable, and – most importantly – increases my knowledge of the old boat for later repairs.

Alas, Meriwether would throw in a new project on our second day in port; our fresh water pump would die. It is a big mechanical monster. Loud as all heck and expensive to replace with a it’s likeness. We have been talking about replacing it anyway, with a more modern type so the trigger was pulled and another part was ordered. The days without water onboard wasn’t so bad, thanks to the marina office selling fresh water by the gallon. We didn’t do a lot of cooking, or dish washing, but we had the ingredient for the oh-so-necessary morning coffee. On Thursday the package arrived and the new pump installed in no time at all. That was some good timing on that failure. 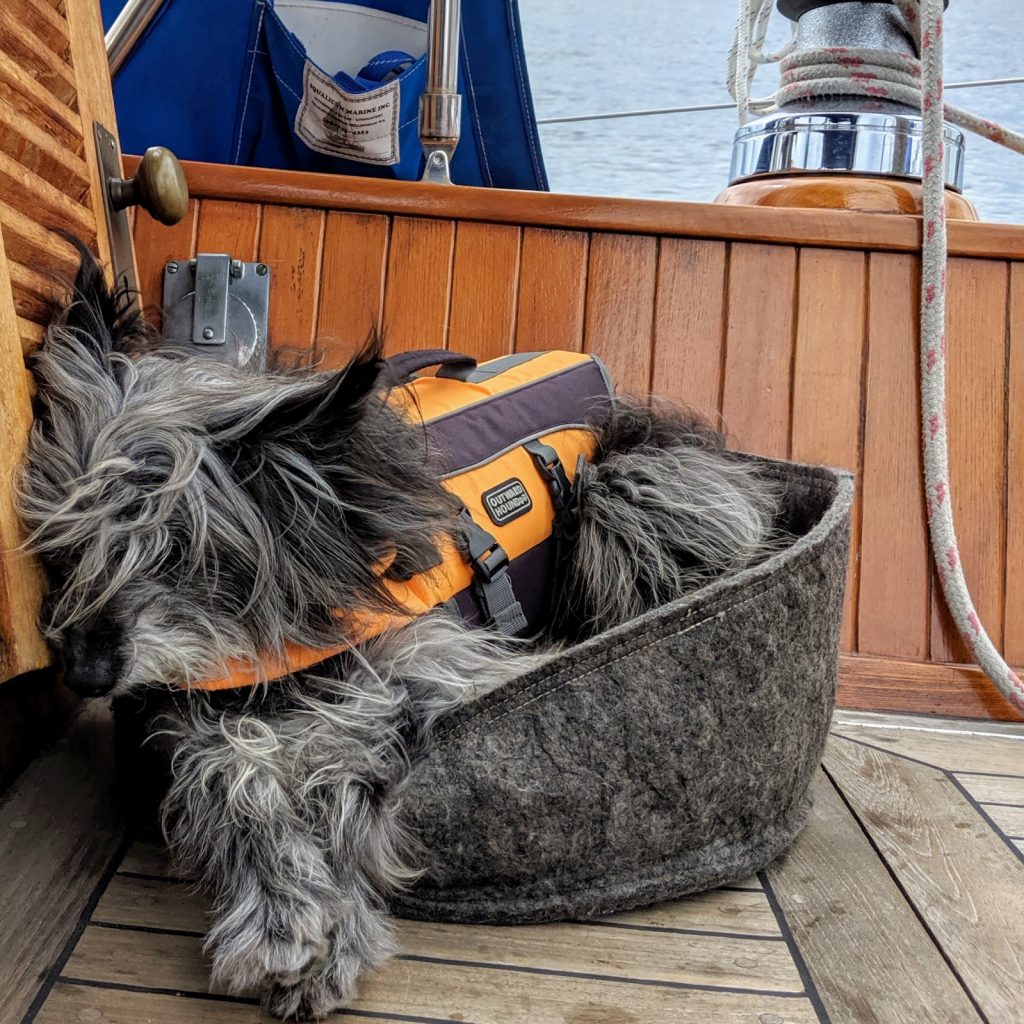 2 – Beating against the wind is to sail  directly into the direction the wind is coming from, using tack maneuvers

3 – Tacking is when the bow (front) of the boat crosses through the wind. The sails will change to the opposite side of the boat.

4 – Flaking a sail is to fold it in such a way – following the natural pattern of the sail – for it to be safely stored and preserved. With the sail still on the boat, flaking the sail means to stacked on top of the boom so it is not blocking the view of the helms-person. There is a lot of pride in well flaked sails.