Our trip up to the next bay was fairly uneventful. T’was only a short hop – easily accomplished after work hours on a random weekday night. Takatz Bay reviews boasted of good cell signal, and we were both ready for less struggle in that department. While out in the more open waters of southern Chatham Strait the cell signal was great, but tucked back in behind some mountains and islands changes it dramatically. So, once we arrived, even with our booster setup, the signal was just as weak – if not weaker – than what we had in Warm Springs.

However, we did have the place to ourselves (which is highly prized by us) and got to anchor directly under two nice cascading falls towering above us. Realizing that we have yet to take that “Alaska shot” of Meriwether under a waterfall, we went ahead and attempted a few. Of course, we couldn’t get the big boat that close to these, but it was still a fun todo. 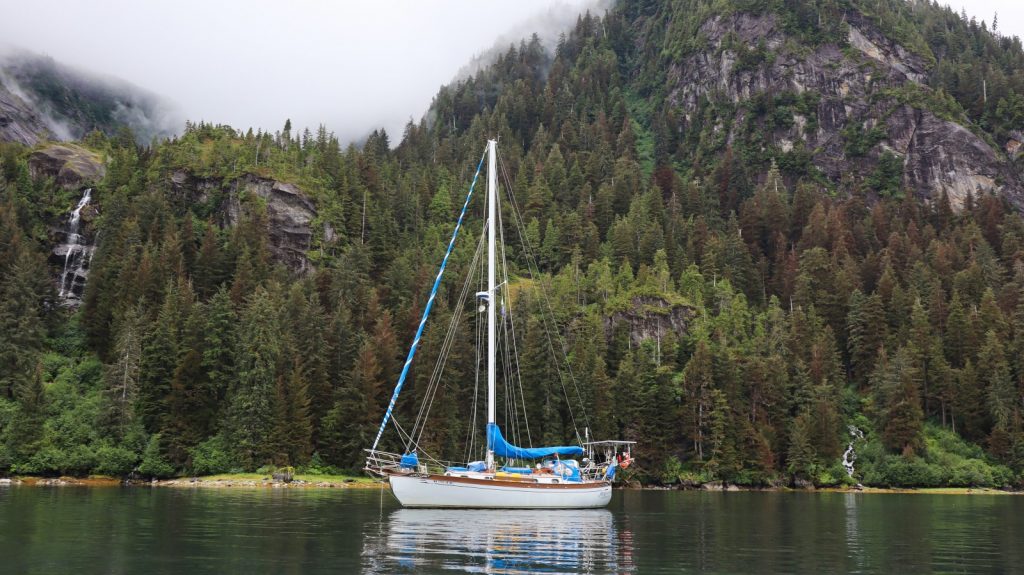 And then the party started to arrive. First one, then another, and then a third super-yacht pulls into the bay. More arrived before our stay was over but anchored out of our sight. Heck, one was so large it had it’s own helicopter. All were chartered, not actually shuttling their true owners around Alaska. Kerri became quite the super-yacht-stalker, looking up each as they anchored to compare the weekly rates – which were anywhere between $150k to a half-mil per week. Just insane! And they all showed up here, in this bay, in no-where Alaska. 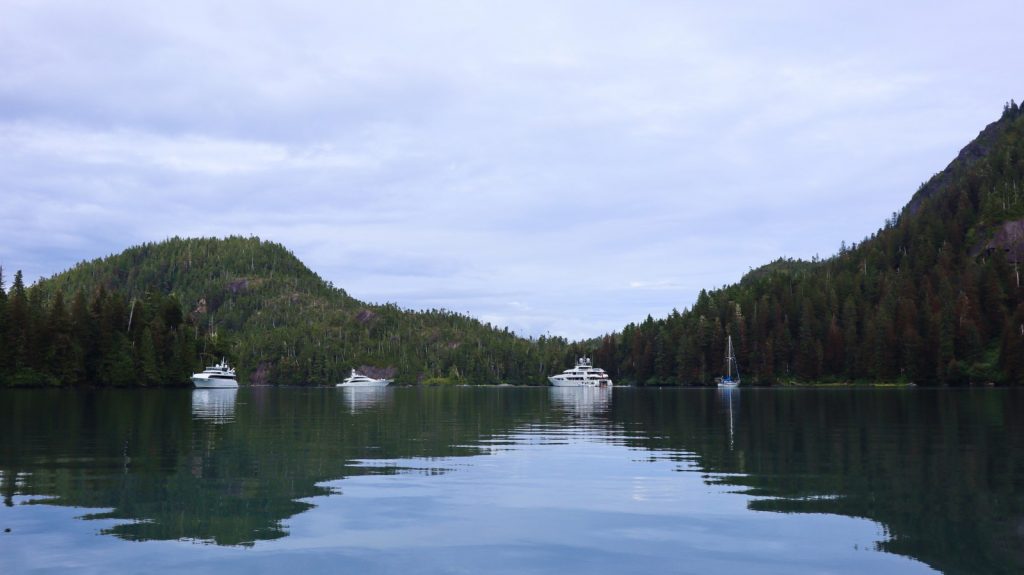 The big boats didn’t stop us from taking our tiny-dinghy out for a cruise around the bay. Not a huge amount to see but for standard beautiful Alaska… and another river outlet guarded by a big brown bear who was extremely upset by the mega-yacht bunch showing up in their fast dinghy, wearing at least a half gallon of perfume each. Kerri and I could smell them a football field away. Imagine how the bear felt about it. 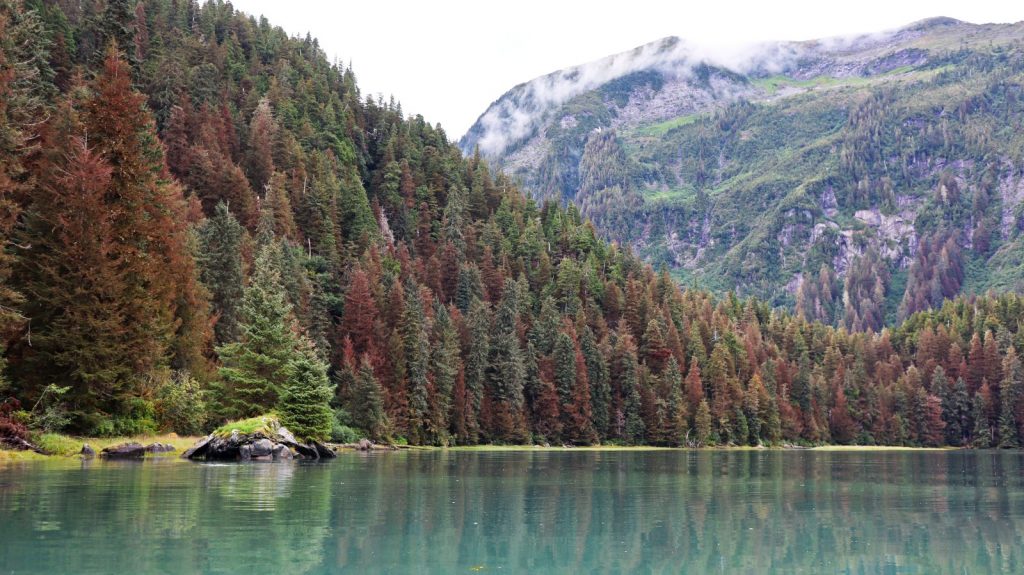 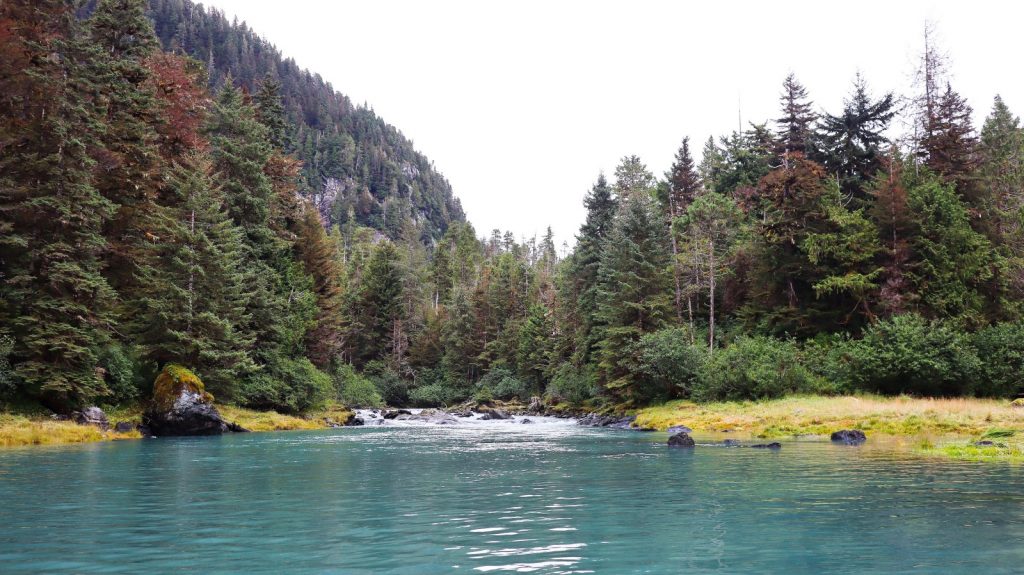 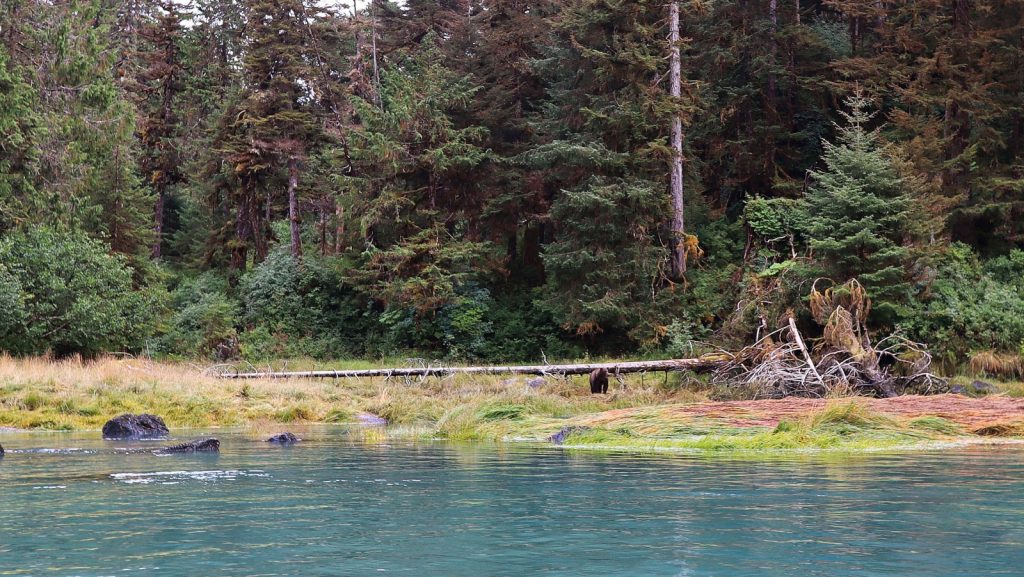 Poor guy was sleeping until the perfume-crowd showed up

Once the work week was complete, we moved on. Still heading North up the Strait we would pass by some of the big waterfall attractions of SE Alaska. Each time we would pop into the cove for the obligatory pictures, but since there was no where to anchor we would simply motor on to the next, then the next, and so on. If it is possible to grow bored of huge waterfalls, one might do so here in Alaska. And of course, the scenery was perfect once again. 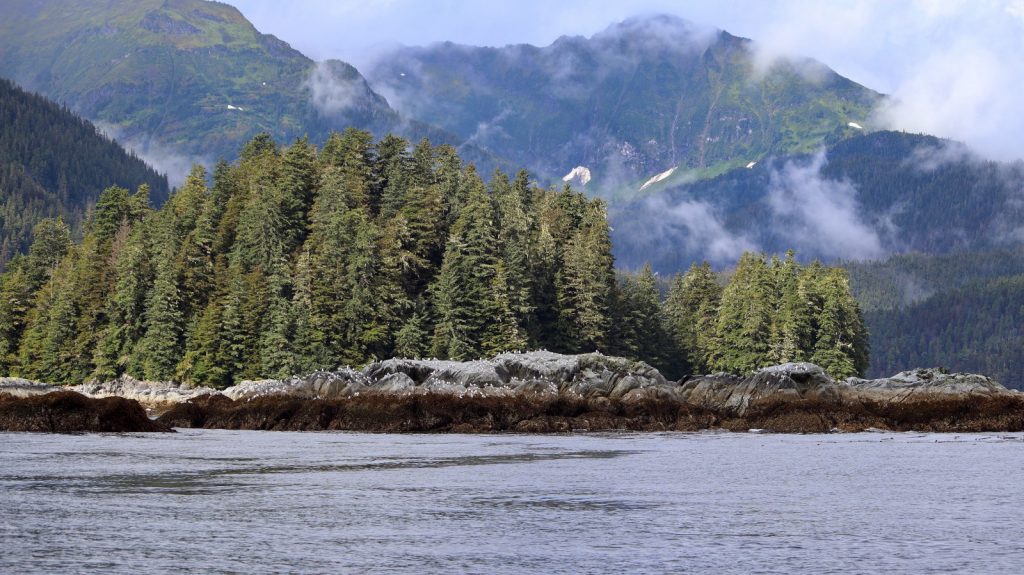 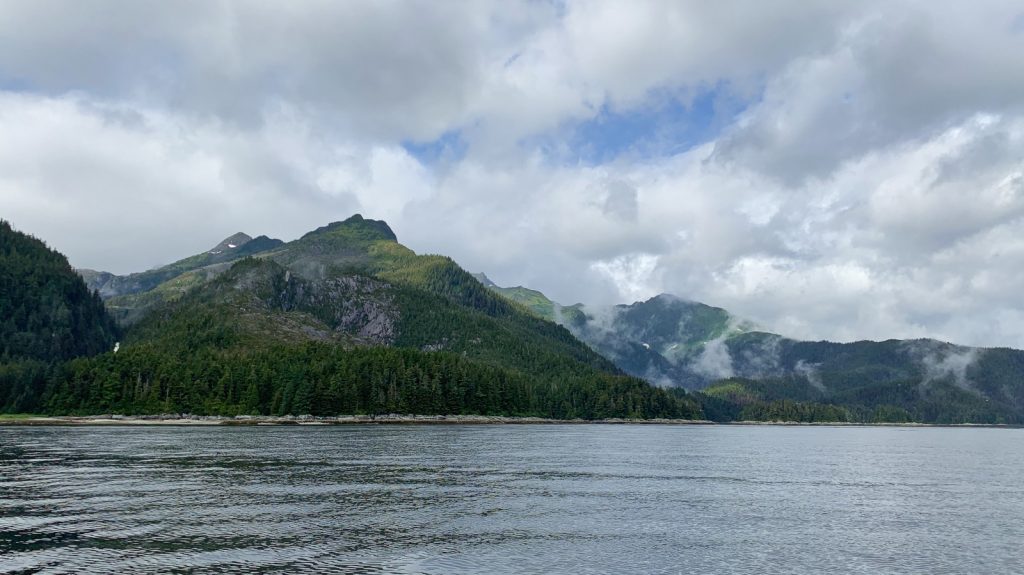 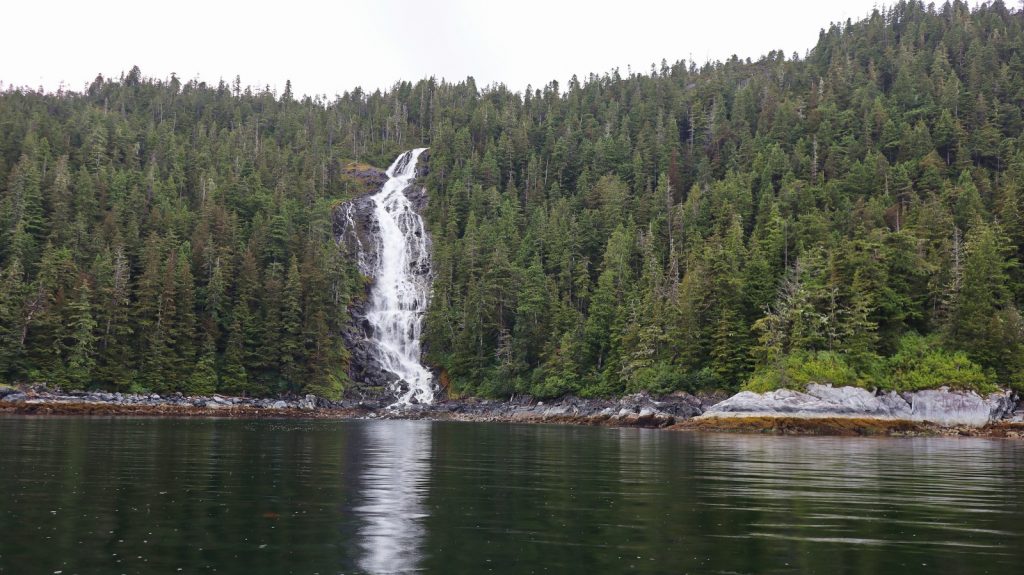 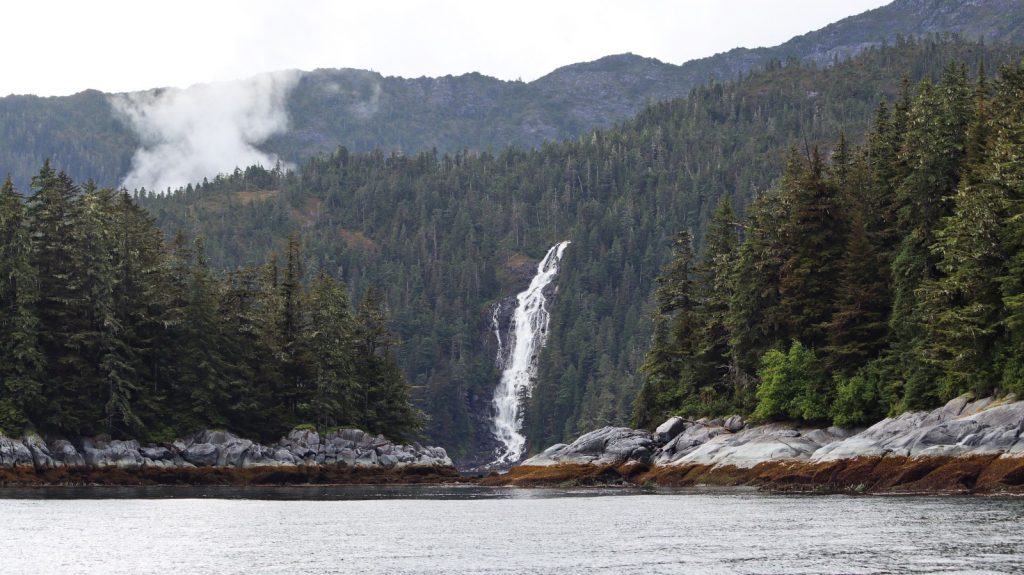 The couple we met in Warm Springs told us about a secret bay on our way up; Basket Bay. They said it had a sea-cave that we can take the dinghy into. We were sold, of course, so made sure to stop by Basket Bay for a night. By the charts there was no anchorage, but we explored the depths a bit, trusted our new friends, and set down our anchor to explore the sea cave. While the anchoring wasn’t the most comfortable (a bit of swell would come in from the Strait) the sea cave was totally worth it.

The river mouth into the bay didn’t offer up the secret at all. Not until we turned the blind corner that the “cave” appeared. Crystal clear fresh water flowed under us, full of salmon working their way up-river. So many swimming around that I slowed our engine just to not make bloody salmon soup right there. We took the river up as far as our little dinghy would go before it could not power up the faster and faster flow of water (and thicker salmon). There I just switched off the motor and rode the flow back out to our bay. It was crazy-cool, like the first time visiting a Disney ride as a child. What a great place to have been told about. 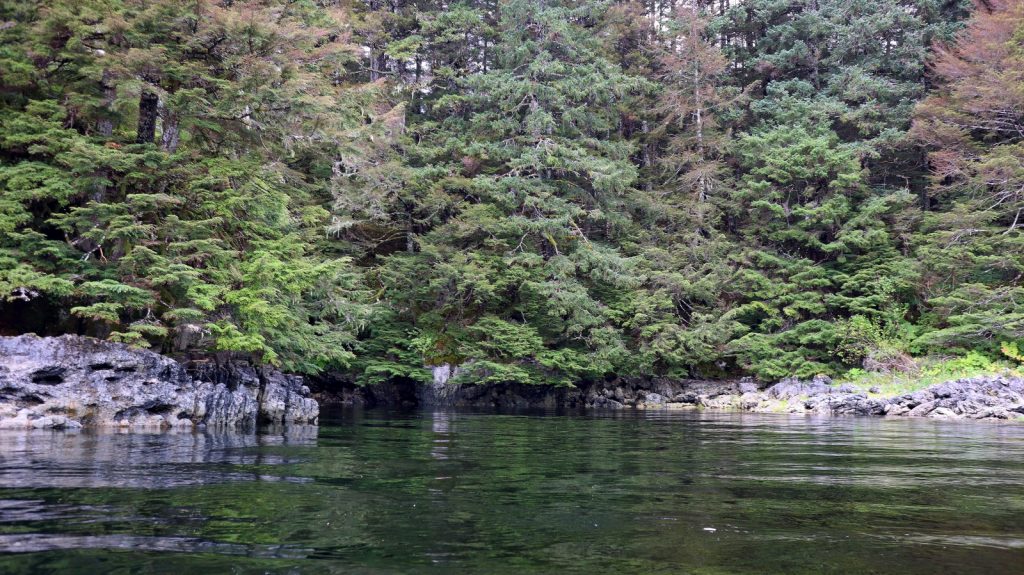 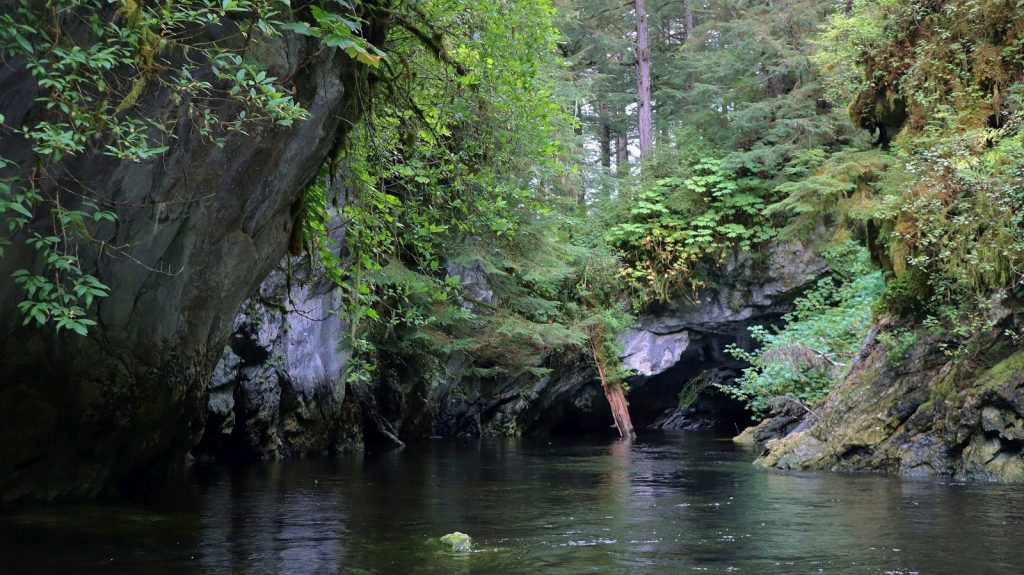 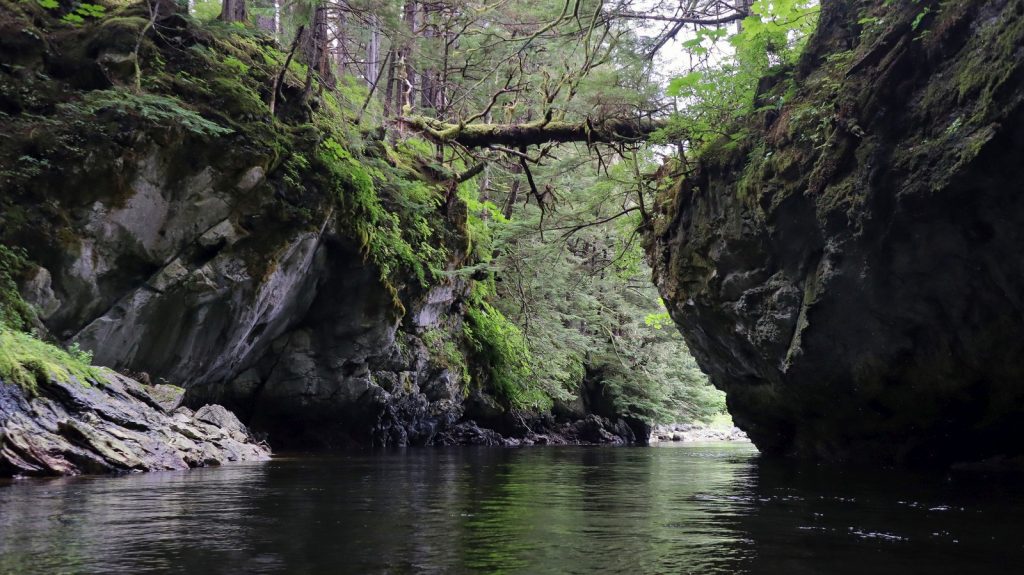