The weather forecasts in Alaska have left a lot to desire. For the most part, it lies, and lies in the worst of ways – heavier winds in your face or no winds if you wanted some. Occasionally though, it lies in a nice way, such was the case the day we left Basket Bay on our way up Chatham Strait towards Hoonah, Alaska. On this day, the winds – although still not what was forecast – came from behind at 15-20 knots. This was simply ideal down wind sailing, and we captured not a moment of it. We simply cruised gradually across the strait, jibed, and repeated a couple more times until we made it around the corner and into Icy Strait. It was just great sailing – a rarity up here – with no one else around to see it. Where were the cruise ships with all their camera-toting passengers now? We did get some recognition from a passing by humpback who waved once and was never seen again. Yep, that really happened. 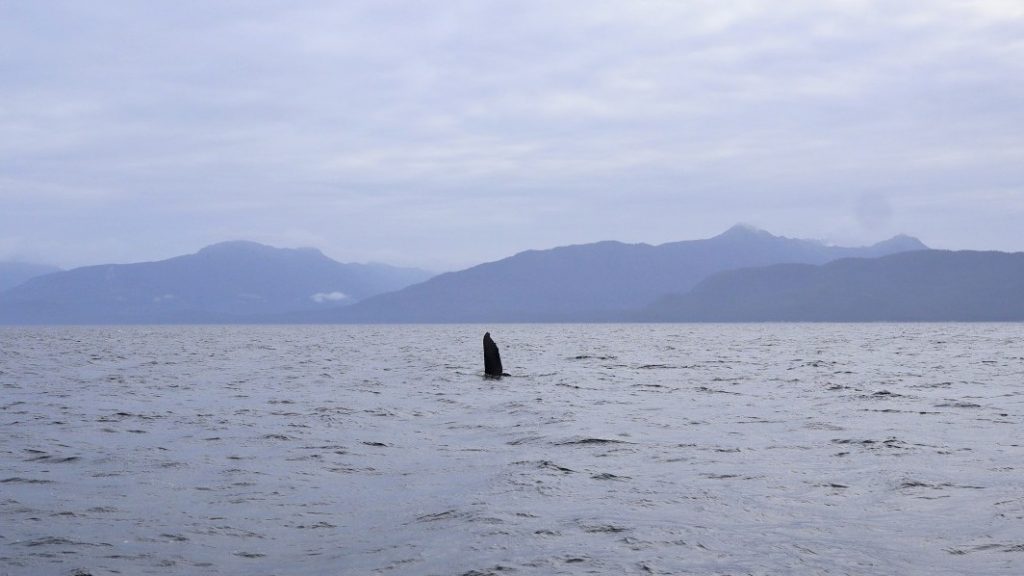 I did toss our fishing line over the stern, paying 150 feet out from the reel. I expected nothing for my actions – just killing a small fraction of the time it was to take to sail the day’s mileage. It took less than a half hour before I heard the unmistakable sound of something pulling on the line. I grabbed the pole and knew it was a fish, even though I have never caught a fish before in my life. Lots of seaweed and shoes, but never something that gave this hearty a fight. I screamed for Kerri to film while I reeled in, let it run, reeled in, etc. It didn’t take long, a few minutes at best, before the big salmon showed herself about 30 feet behind. Easy to haul in by now I brought it to the side of the boat, grabbed the line, and hauled her over our lifelines and into the cockpit where I tried to end the struggle as swiftly as I could. It wasn’t glamorous, but the deed was done. Catching a big fish while sailing is a bucket list sort of thing. It was exhilarating, even though I have no interest in eating such a creature. 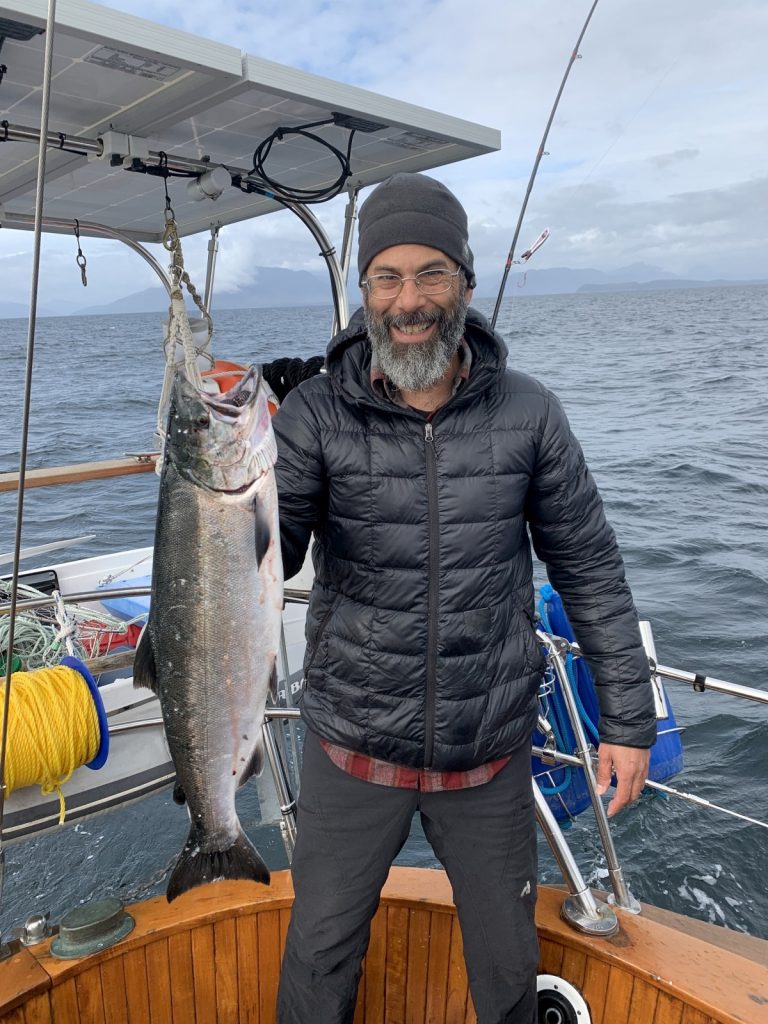 Check out my pirate face

As we rounded the corner into Icy Strait the wind would die off as planned, we’d drop the sails, and motor into our anchorage. There, Kerri brought our catch up to the foredeck and processed it as best we could find out how from the Internet. Neither of us have any real knowledge on this stuff, so it was a shit show and a butchering, but we learned a lot. She prepared what she could in preserved edibles over the next few days and froze as much as we could fit in our freezer. A full two person salmon meal was consumed (yep, I ate it too) right away to celebrate.

The next day would be a quick motor into Hoonah where we would spend the work week preparing for our last big adventure of the year; Glacier Bay National Park. 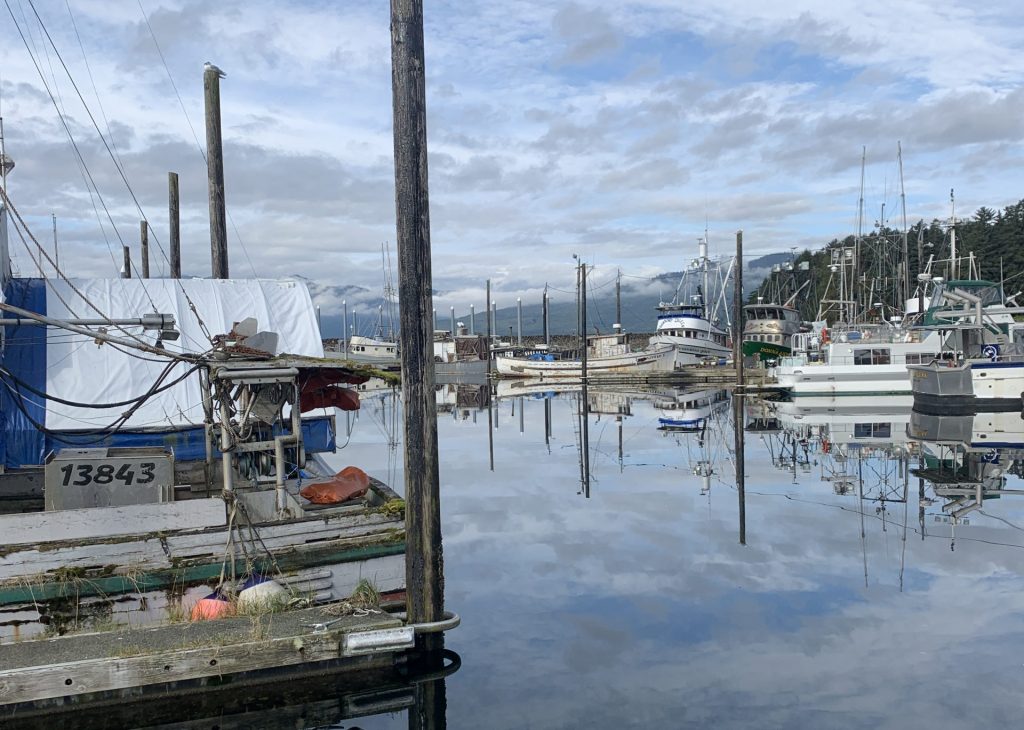 The only picture taken while in Hoonah 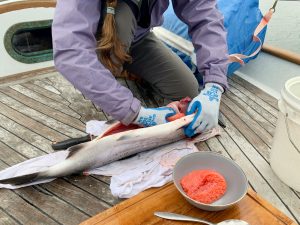 Getting creative with processing salmon. Tim, historically at least, doesn’t like fish at all. But he was pretty darn excited about our first Coho catch while sailing and trolling last weekend, and was motivated to try. If I had to guess, I’d estimate this salmon gave us 5–6 lbs of meat. I’m not a fan of the texture of cooked salmon, though I love it all other ways. 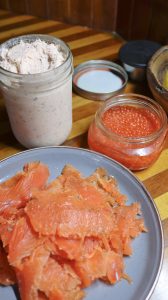 We were gifted with a female with skeins of roe, and roe is just about
my favorite thing from a salmon, so I immediately got to work on salt curing on half (that‘a already eaten!) and curing the other into Ikura. Sushi isn’t an option, since parasites are a common thing in the salmon up here, and we don’t have a way to flash freeze. Nor do we have the means to smoke. But gravlax (which I like even better than smoked salmon) was doable—except that it’s entirely impossible to get fresh dill (or even dried) in the tiny markets here in remote SE AK, so I used what dried dill I had, and hoped for the best. I cured to long—it’s too salty, even for me, but the texture is perfect!
One steak got baked and mixed into a “smoked” salmon spread (with the help of liquid smoke). And, miracle of miracles, I baked two big steaks with a glaze of brown sugar, maple, and soy, and Tim ate his entire steak (I had more trouble getting down the last few bites than he did)! I’ve never seen him finish a fish dish. So we’re getting somewhere. – Kerri