The sun sets so late here in Alaska that we have been doing a lot more late-day sailing than usual, extending our weekends by a few hours. That head start on this weekend got us to Kindergarten Cove on Etolin Island, but our exploration objective was the next island over; Wrangell Island. By the end of the weekend we would pull into the town of Wrangell for the work week. 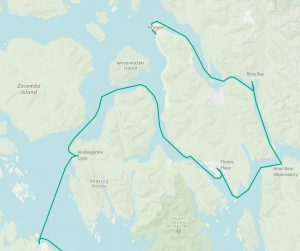 Our route, counter-clockwise around Wrangell Island, included two constricted waterways (not rapids, but tight enough to plan around the tidal currents), both of which would defy the tidal predictions and do their own thing. I can only assume it is the glacier melt (and big rain that passed the night before our arrival) that turns the currents against us – literally the entire trip. Luckily, we were not in the biggest rush as the mileage for each day was easily achieved even with the gentle resistance.

The melt from the far away glaciers turn the water from a deep dark sea to silty teal with a tropical look. Patches of the colorful water – miles long – collide with the darker in abrupt lines of separation and each with their own currents and temperatures (cold, and even colder). I really enjoy the glacial waters color. Although colder, it gives the impression of not-the-same-ol’ Pacific North West waters. How I yearn for warmer waters. 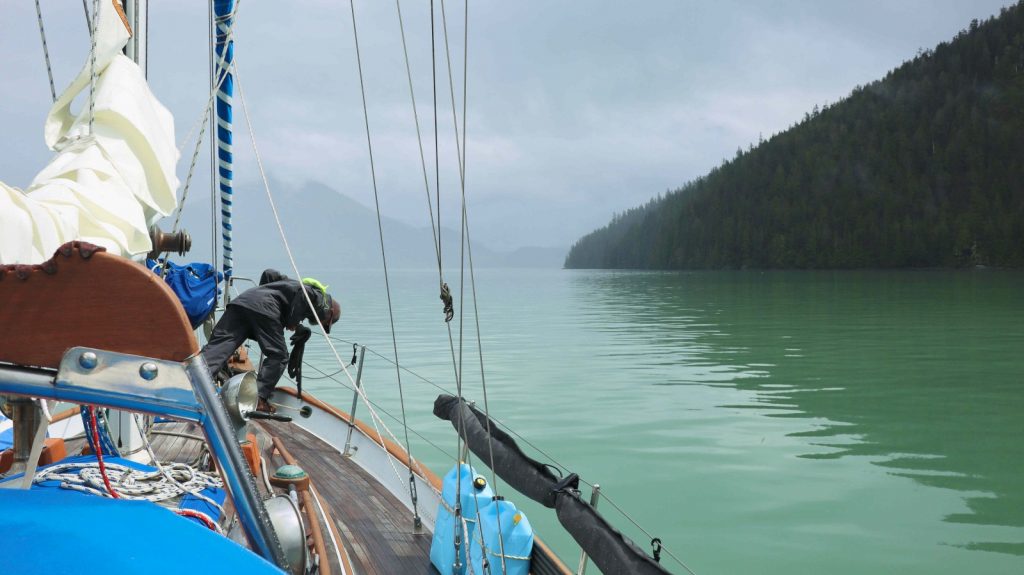 The true Alaskan weather kept us company the entire weekend, with rain or threat of rain pretty much the entire trip. Not to worry, our foul-weather gear is quite effective at keeping us dry, but by the end of the first day sitting in the rain while we motored we decided to setup our sun-shade to protect the cockpit area. Stripping away the added layers of clothing, and worries of staying dry, made the rest of the trip so much more comfortable. It really was the ideal place – and by that I mean all of Alaska – to setup the shade as there would be no wind to threaten it anytime soon, especially this far inland. 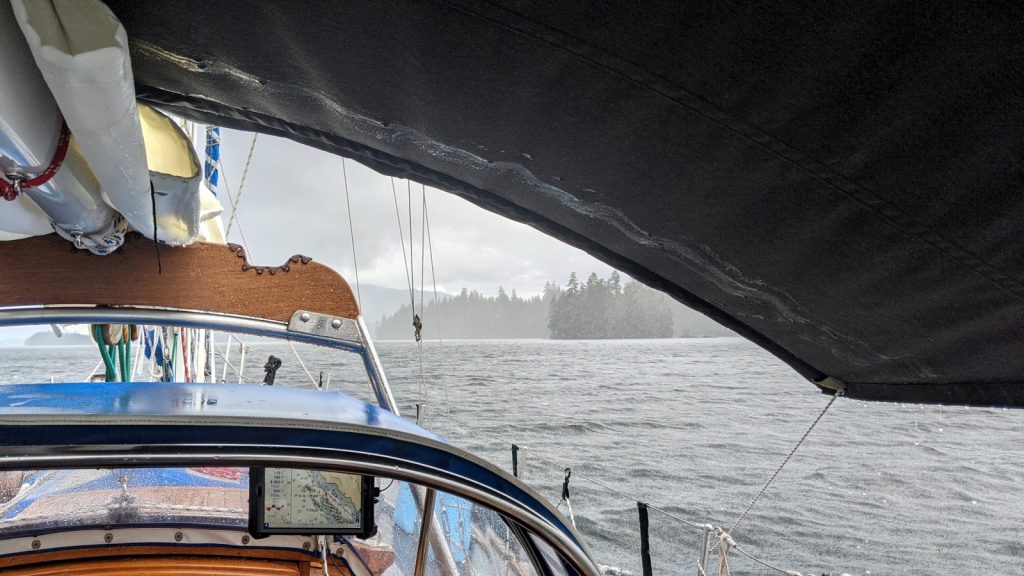 Our view forward once the shade is in place 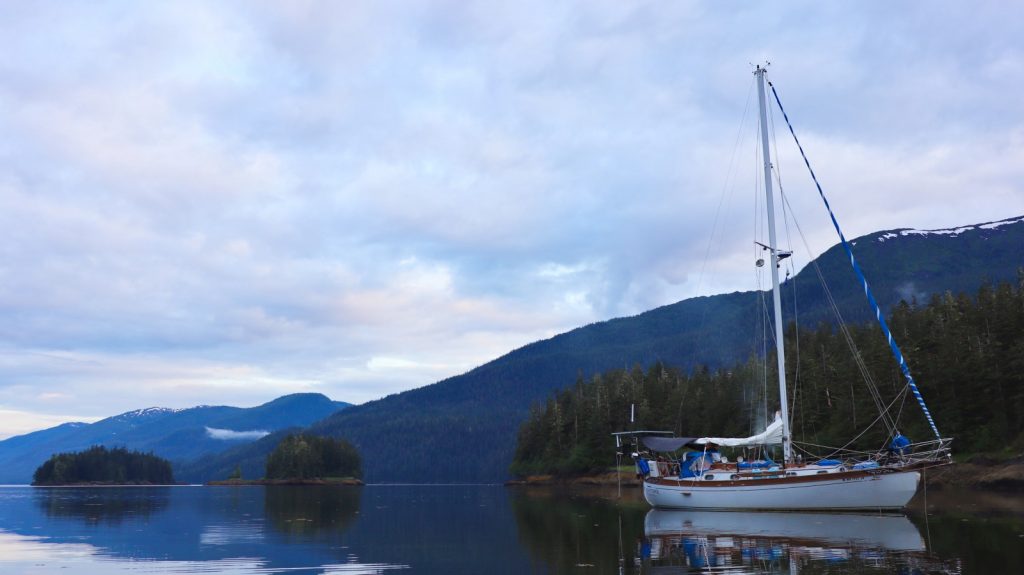 At anchor, Meriwether sports her sun-hat (works great for rain too)

At our first night’s anchorage – Thom’s Place; an undeveloped State Marine Park – we set out in the dinghy. The bay is dotted with tiny islands to explore so using them to slalom around is always fun. However, near one end of the bay – about as far from our boat as we could be – the prop hit bottom… twice. Then a few minutes later it was clear we had prop issues. Although the plastic propeller had not broken, the sacrificial pin that keeps it in place did break and prevented us from using the motor any more. It is an easy enough fix, but only when you have the correct tool and replacement part, which were both back on the boat. Out came the paddles, and in came the breeze. It doesn’t take much wind to make a paddle miserable, and the distance back to the boat – upwind, of course – added to the misery. Eventually we made it, but my shoulders may never be the same. 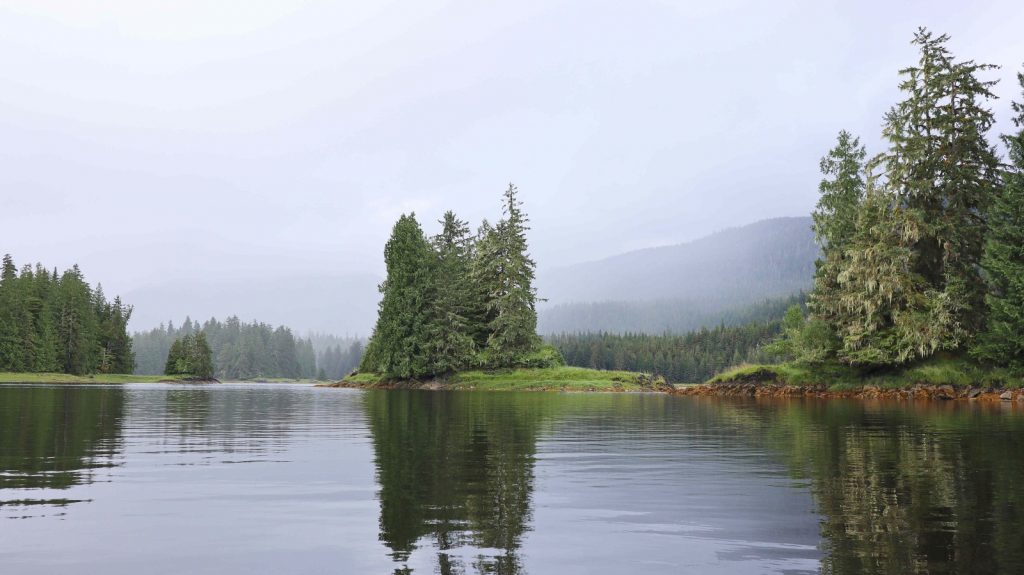 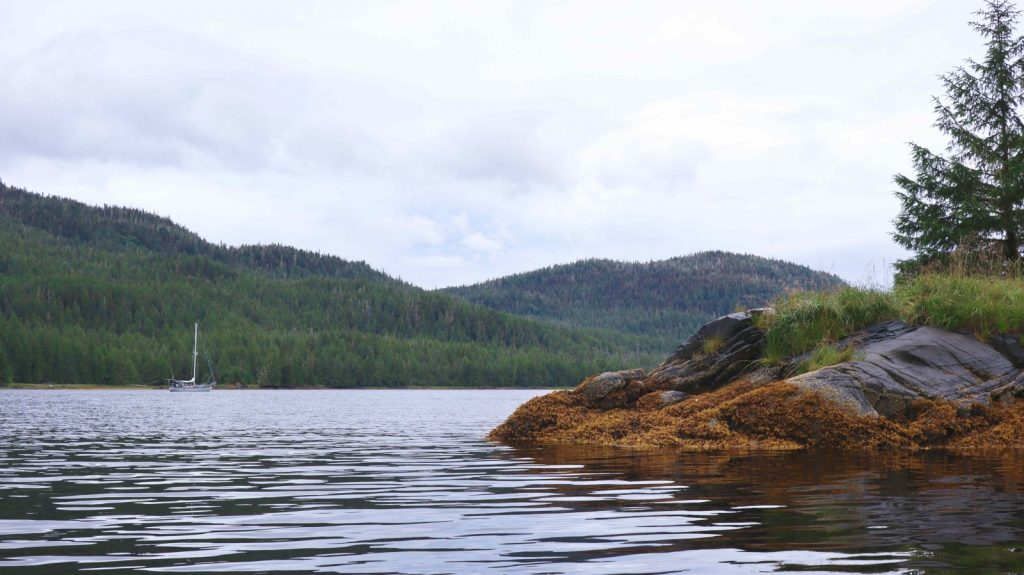 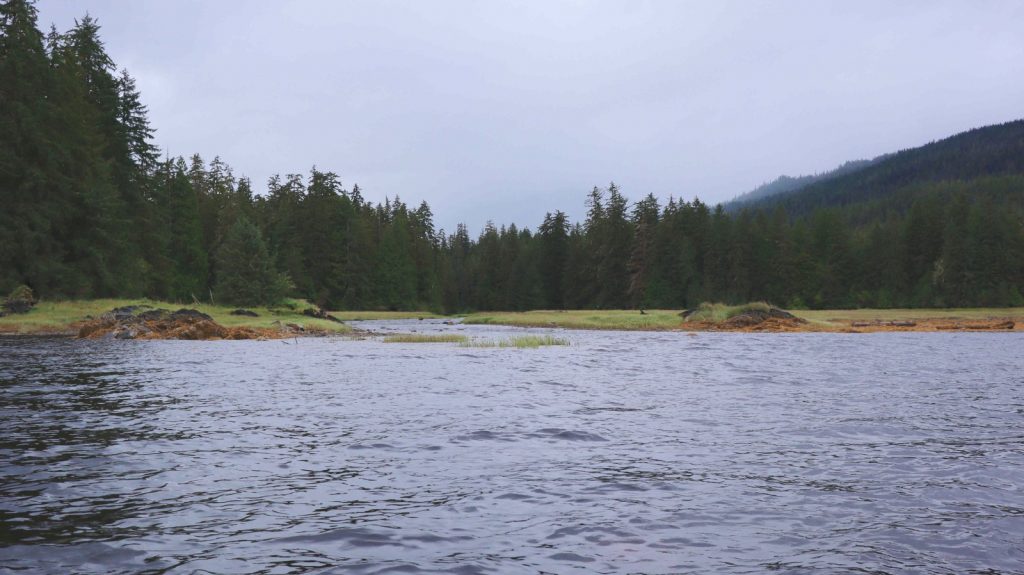 At the pinnacle of our route is the Anan Wildlife Observatory where bears arrive in large numbers to feed on the carpet of salmon climbing Anan Creek. The observatory requires a permit from the forest service to visit, and those permits were sold out a week in advance. I had only learned of the place a few days prior so our chance to visit was minimal but the experience was supposed to be well worth the unannounced arrival and request. Upon our arrival I flagged down a Ranger, who was already visiting a nearby boat, who then got us in contact with the Ranger controlling the trailhead to the observatory. With his permission we were allowed to pay for a permit on the spot and go see the bears. They even loaned us bear spray (because we were not thinking and left all our protection back on the boat) for the bear infested half mile hike. 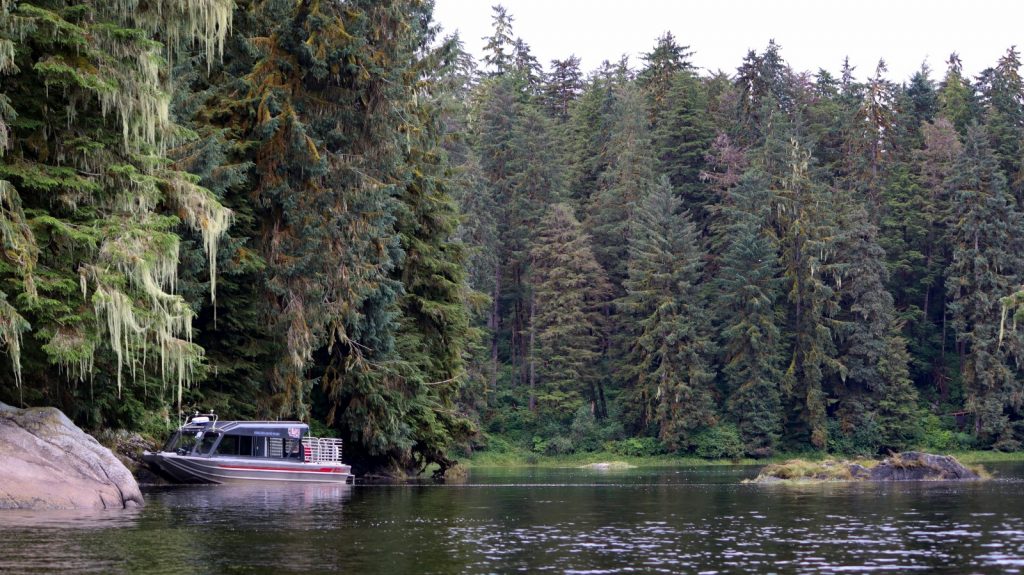 One of the numerous tour boats, that shuttle visitors from Wrangell, picking up their passengers 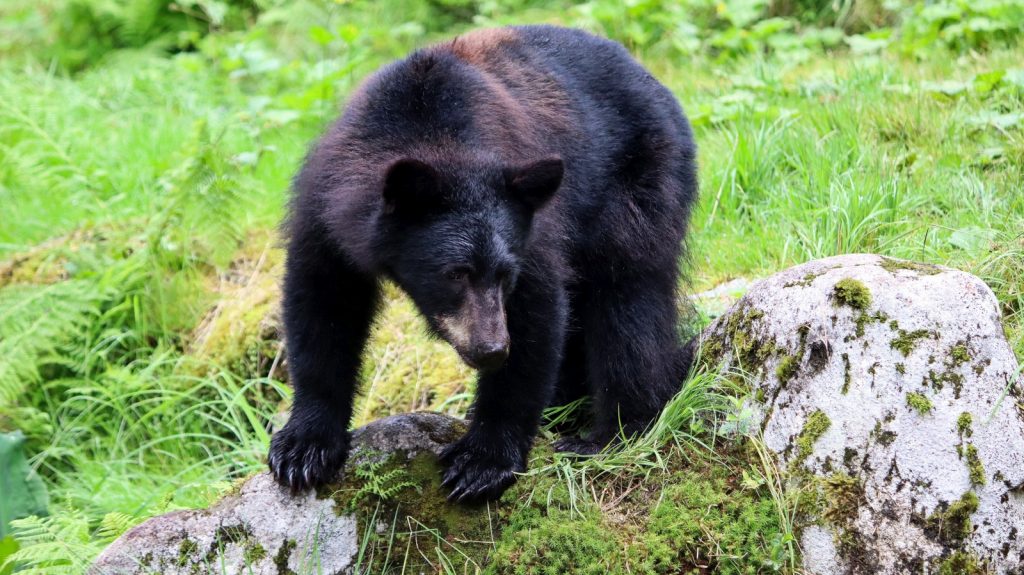 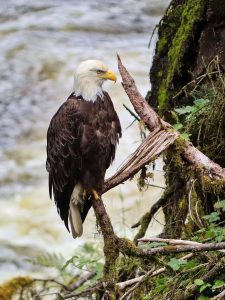 Eagles join the feast as well

Once at the observatory it becomes clear just how amazing this place is. It is the humans in the cage (fenced platform) while the bears run completely free all around, literally within arms reach at times. They are all supremely well behaved and really just focused on the feeding. Brown and black bears intermingle, some with cubs of varying ages.

Each has their own technique of pulling salmon out of the rushing rapids, each with their own degrees of success. Some bears are extremely practiced and would simply walk to the water and grab a fish as if it were an item placed in their very own refrigerator. Others where comical in their repeated attempts and subsequent failures. But, eventually, all would leave with a big salmon in their beak and either waddle up the bank and into a rock-cave or on top of a creek side rock to eat.

This went on for the hour we sat out, in the rain, watching the beautiful beasts live in nature. I love it when it is the humans that have to be hindered as opposed to the wildlife. The fact that it was us in a box, and them totally free, just feels right. Eventually, we started our way back down to Meriwether just in time to pass a large group, from another tour boat, walking up the trail. Perfect timing! 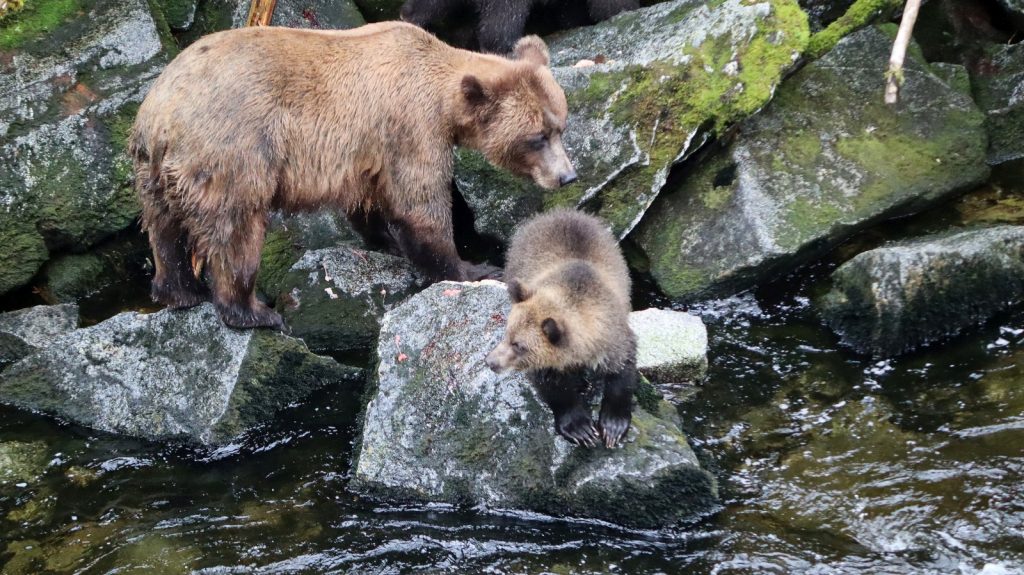 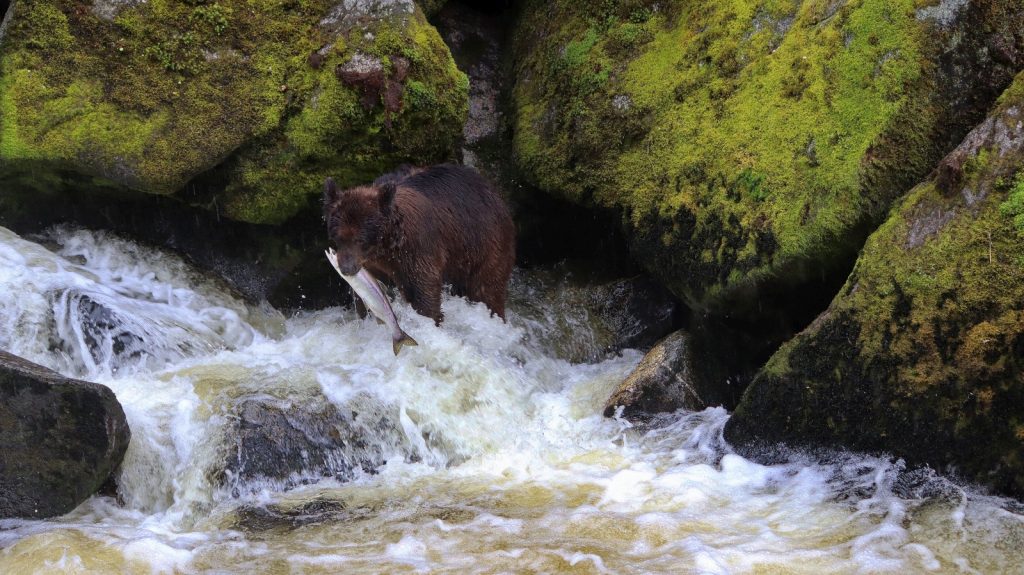 Once aboard, we still had another almost-20 miles to navigate to our anchorage at Berg Bay. Once there we were in the process of anchoring when the gearbox got stuck in reverse again. It is the cable sticking actually, but once stuck it takes for me to disassemble the top part of the binnacle to fix – a process that takes about 30 minutes round trip. This simply cold not continue happening as one day it would bite us bad in the worst of times – like in the middle of a marina. I knew I had another big and urgent project once we arrive in Wrangell. It never ends.

Anchored in the placid bay with a towering bright-green mountain to the north, and a forest service cabin at waters edge, we immediately set out to peak in the cabin – which was unlocked, so we may have poked around even more. A boardwalk trail out back persuaded us to take a short hike through heavy forest lined with berry bushes galore. The trail eventually led us to an alpine marshland, where the trail went squishy, convincing us to turn around after a few moments of taking it in. With this sort of view in my retina I can’t help but daydream of Kerri and me out in a scene like this, having built our own small log cabin, and growing old together. Hopefully I can chop enough wood each summer, even in my later years. 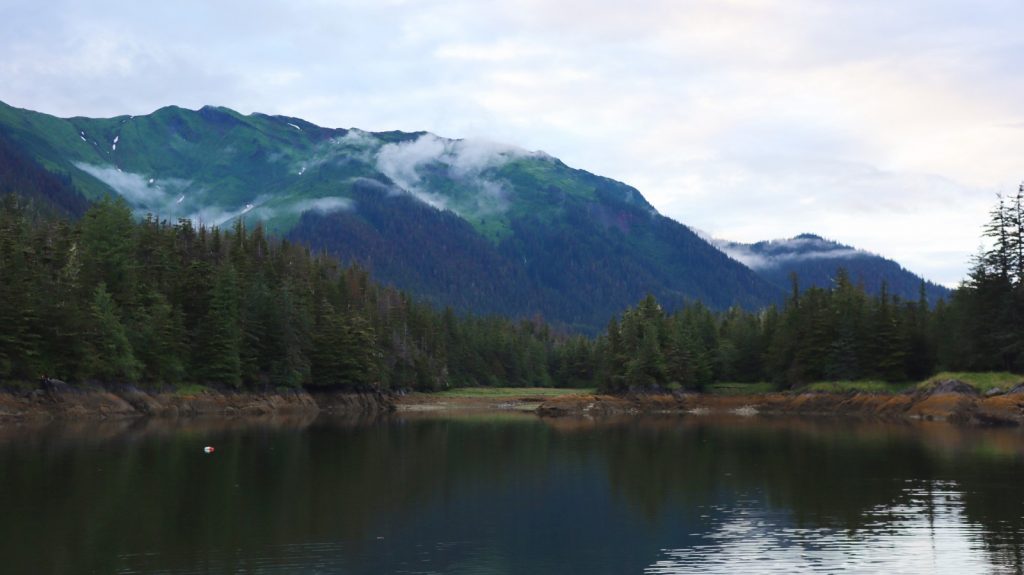 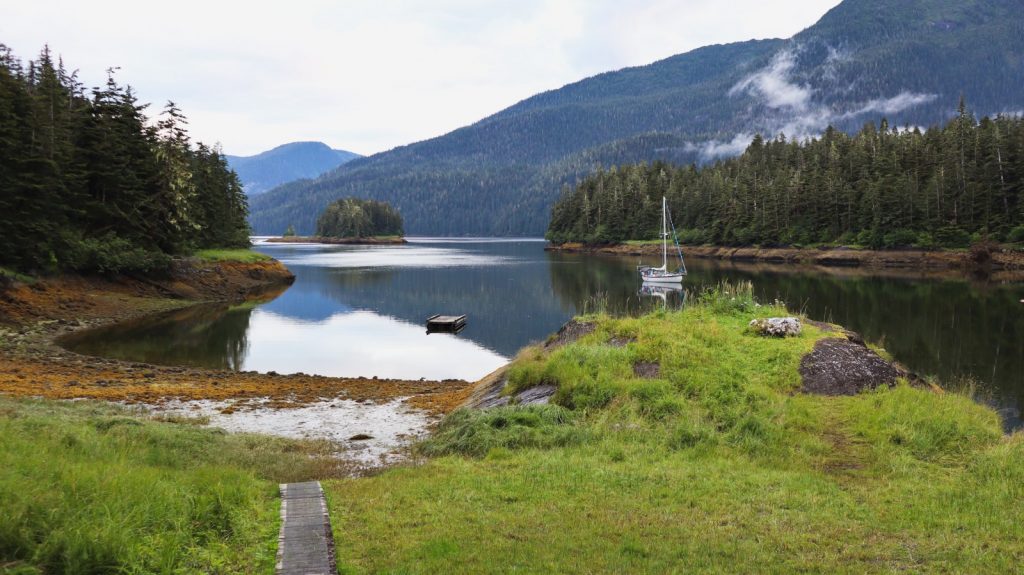 After a another restful night at anchor we got started on the final leg of the weekend’s journey; through the The Narrows and up the Eastern Passage to Wrangell-proper. Not much went on during the three-plus-hour trip other than a slow transition from absolute-wilderness to mostly-wilderness and eventually to the big city life of Wrangell, Alaska… population 2000ish. 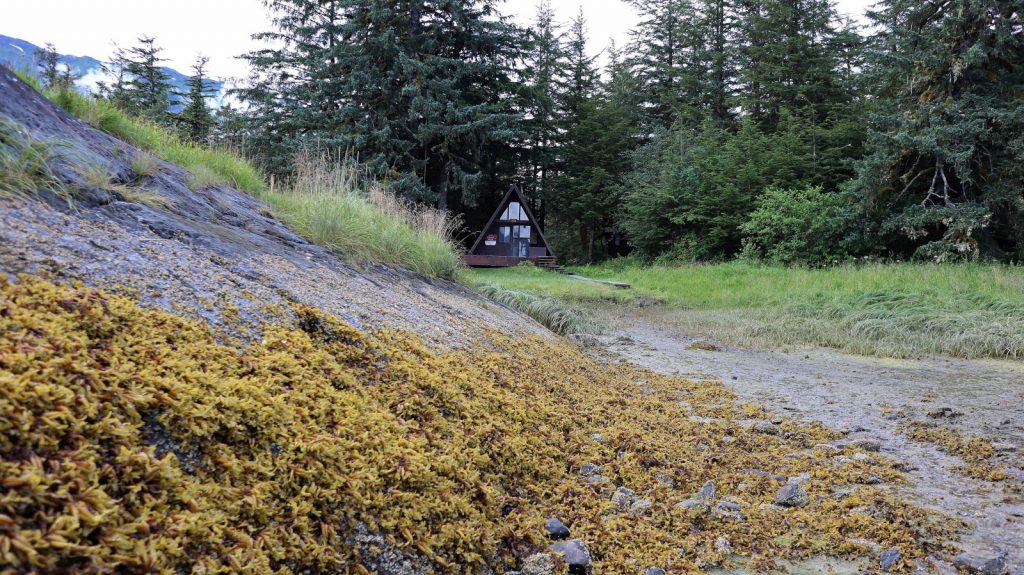 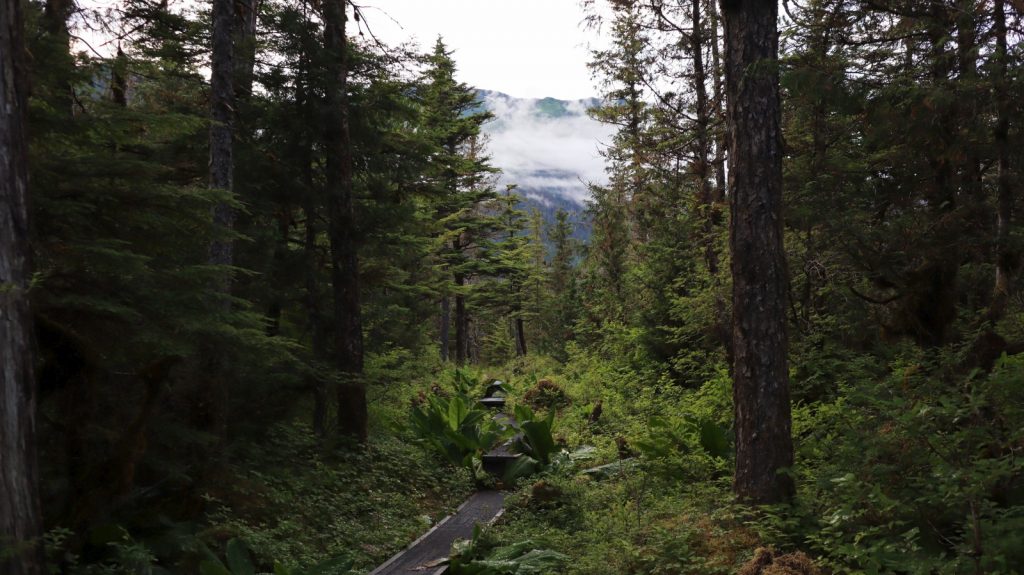 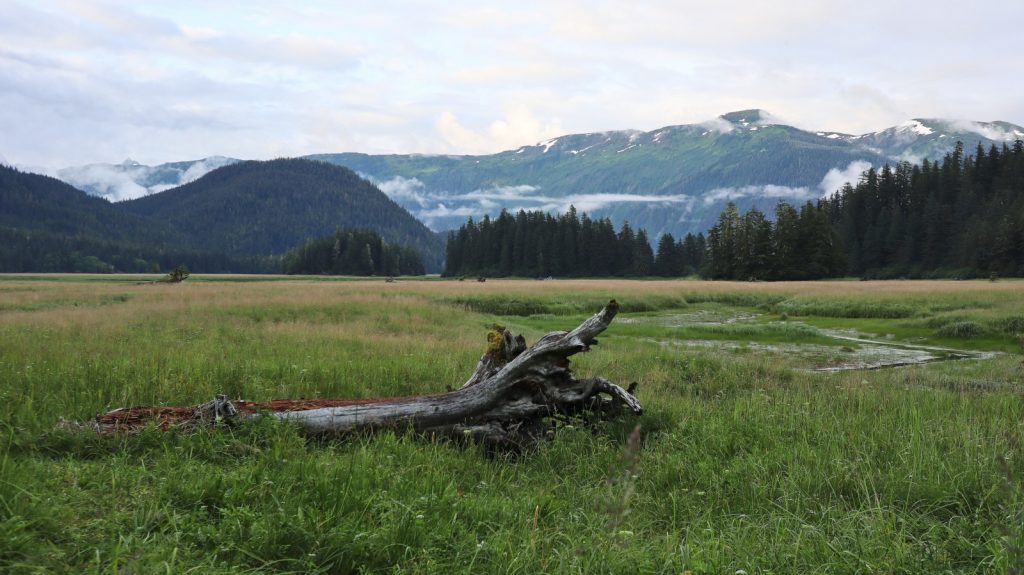