It felt as if our entire Alaskan voyage was culminating on this very spot. It is loved by the locals as well as the social media influencers. It is no secret, by any means. Talk to anyone about sailing around South East Alaska and they will advise a stop over in Warm Springs. Free, private, hot springs overlooking the bay – sounds amazing, right? Then add a waterfall and brown bears into the view and the whole experience gets pushed past eleven… or dare I say twelve?!?!

Honestly, on our approach to to the dock I had no idea there was a crazy big waterfall here. I normally prefer to come into places completely blind – with no expectations – as I am addicted to that “oh wow” feeling that you just don’t get if you research too much ahead of time. The falls did the job right off the bat, and would continue to awe every time I looked up during our stay. I could not wrap my head around just how much water fell here. How was it possible that the lake above does not run dry in a matter of minutes? 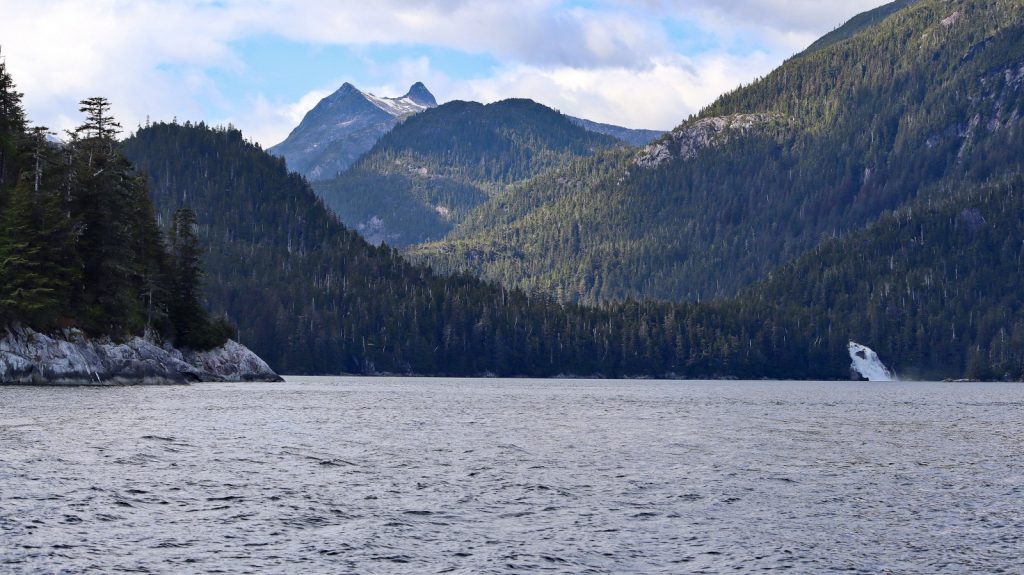 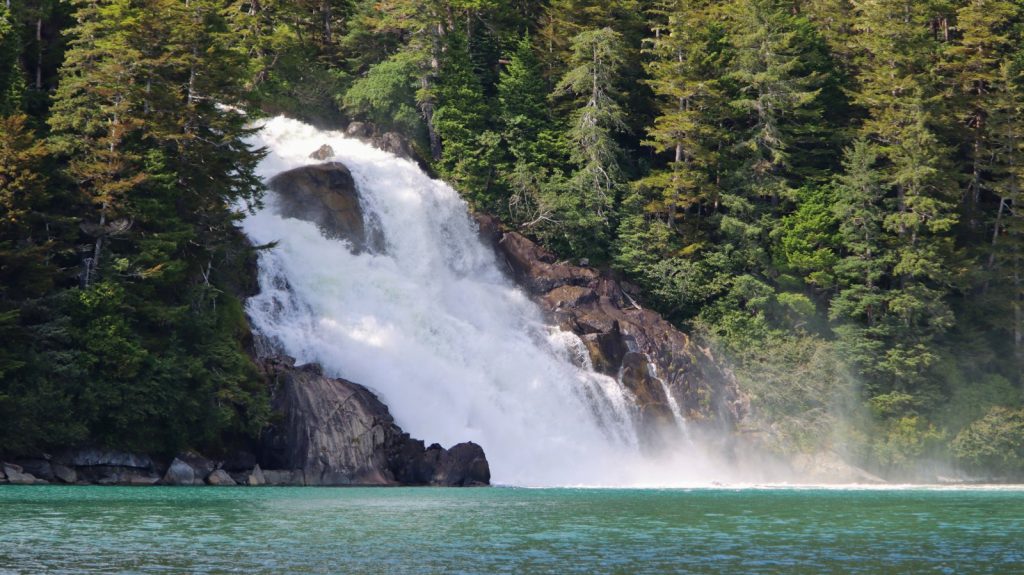 Our last hot shower was back in Petersburg, so the thought of a soak in our own private bath house in some steamy spring-water was top on our minds leading up to us lashing to the end of the dock. It was a Saturday, and surprisingly only one other boat was tied to the dock before us. We felt no rush to walk up the boardwalk to start a soak, preferring to wait until sunset to get the full experience. It took a few hours for us to consider that going twice in the same day was an okay option, so we set off for the tubs.

It was at that time a lone brown bear showed up to graze directly in our path to the tubs. Of course, we see no bears in pretty much all of Alaska until we set off to soak in the springs nearby. The bear loitered around for a while, eating grass and sniffing about, eventually moving past the bath house and towards the waterfall, giving us the opportunity to sneak up to the tubs for our first soak (and cleaning in some time). He stayed in view during our soak, with the waterfall as a backdrop. Seriously… hot spring, bear, waterfall. I’m sure a bald eagle flew overhead too. 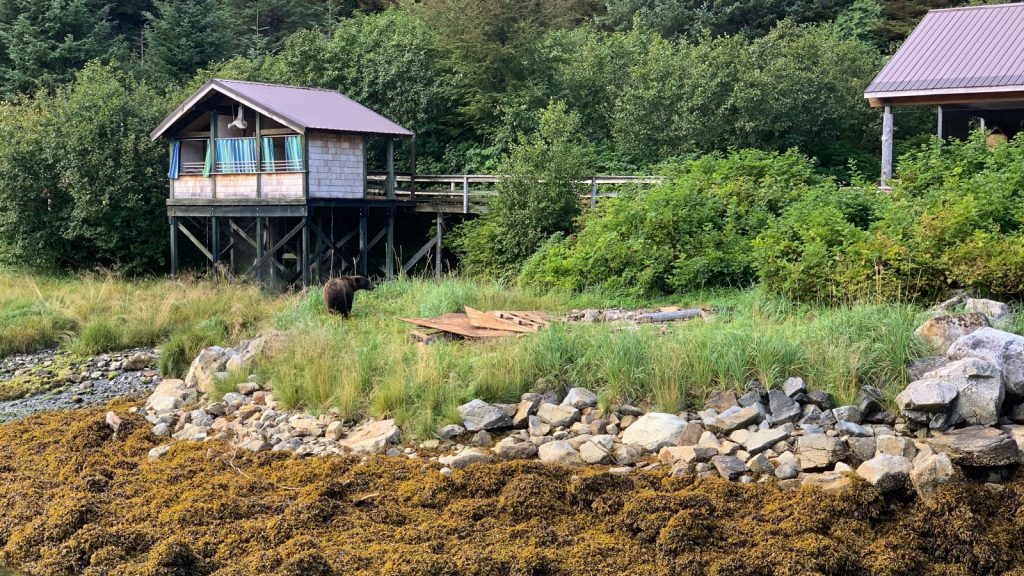 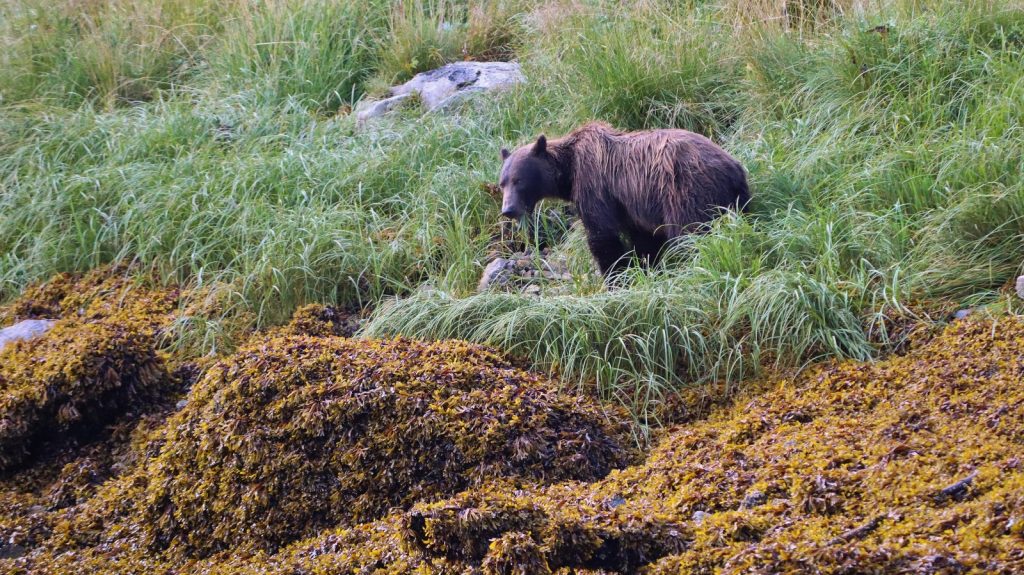 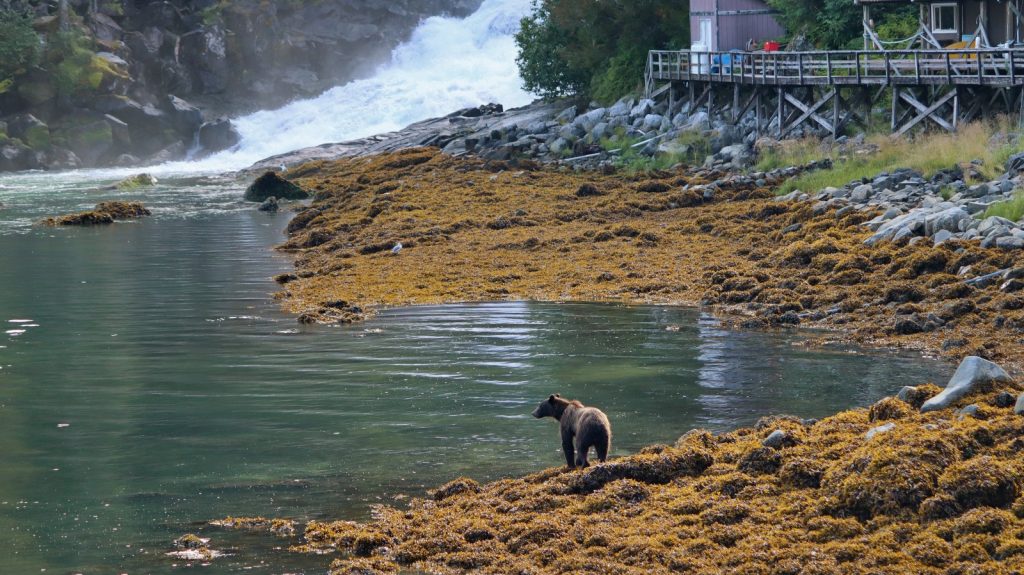 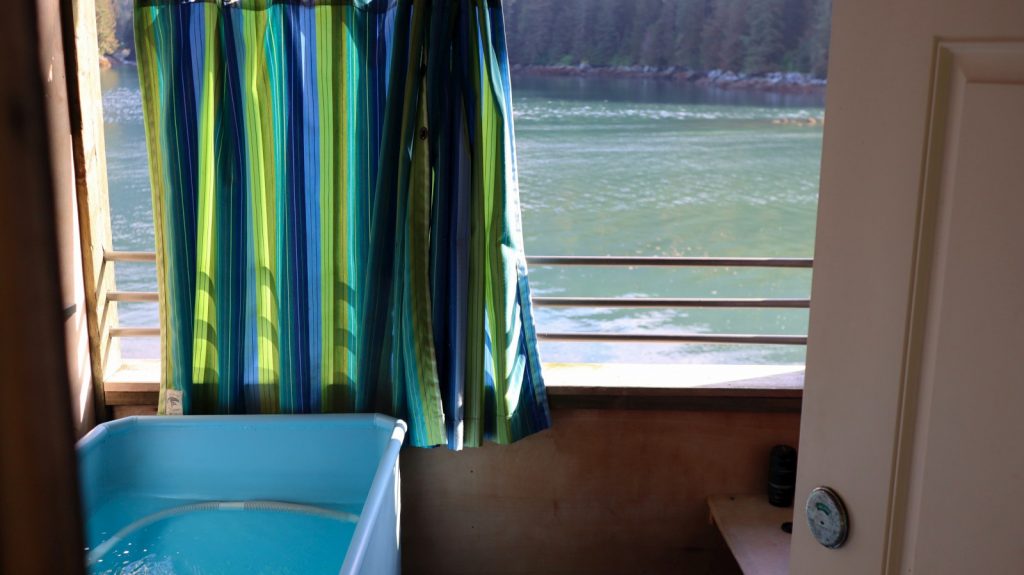 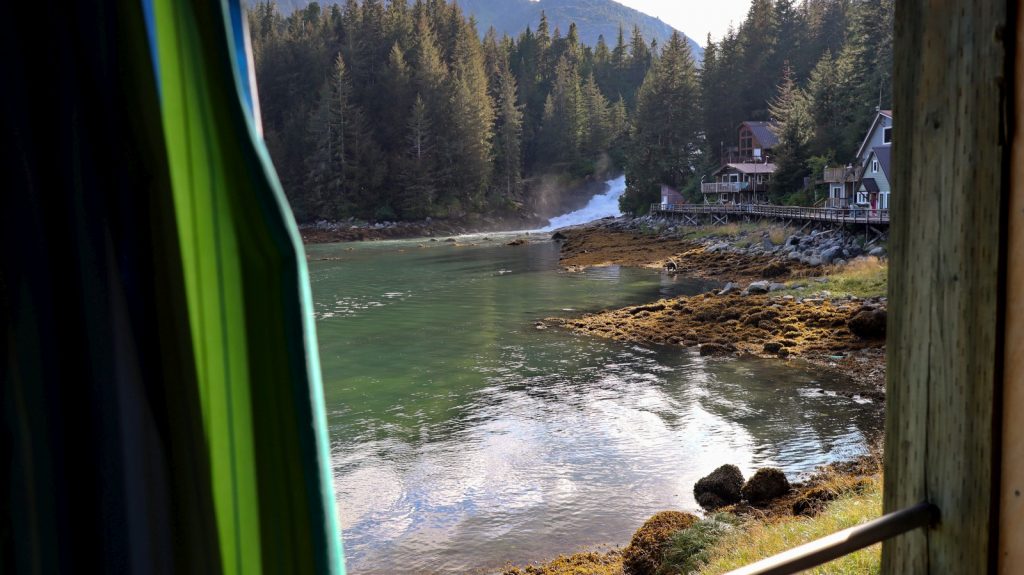 We had just a sniff of a cell signal at the end of the dock (with all the boosting gear working as hard as it can), so it didn’t take long before the idea of spending a week came up. I surely was not going to complain or veto, so we went ahead and paid up for a full week (yep, they had a weekly rate for dock space) and hit the tubs every morning and evening during our stay. Other boats came and went for a few days. We even had the whole place to ourselves for a day, but eventually the dock space would fill with other boats. One of which was a 70 foot carbon-fiber racing catamaran who’s crew (a younger couple) became quite good company for the night they stayed. They invited us to join them that evening at the natural springs up the trail – which I must admit wasn’t even on my radar. During our evening together they did a tremendous job of selling us on wintering in Sitka (where they have a house). Afterwards we invited them over to Meriwether to continue the conversations over a cocktail. And the following morning, just before they shoved off the dock, they gave us a tour of the Cat and fixed us up with a retired crab pot after hearing our crab pot loss story the night before. 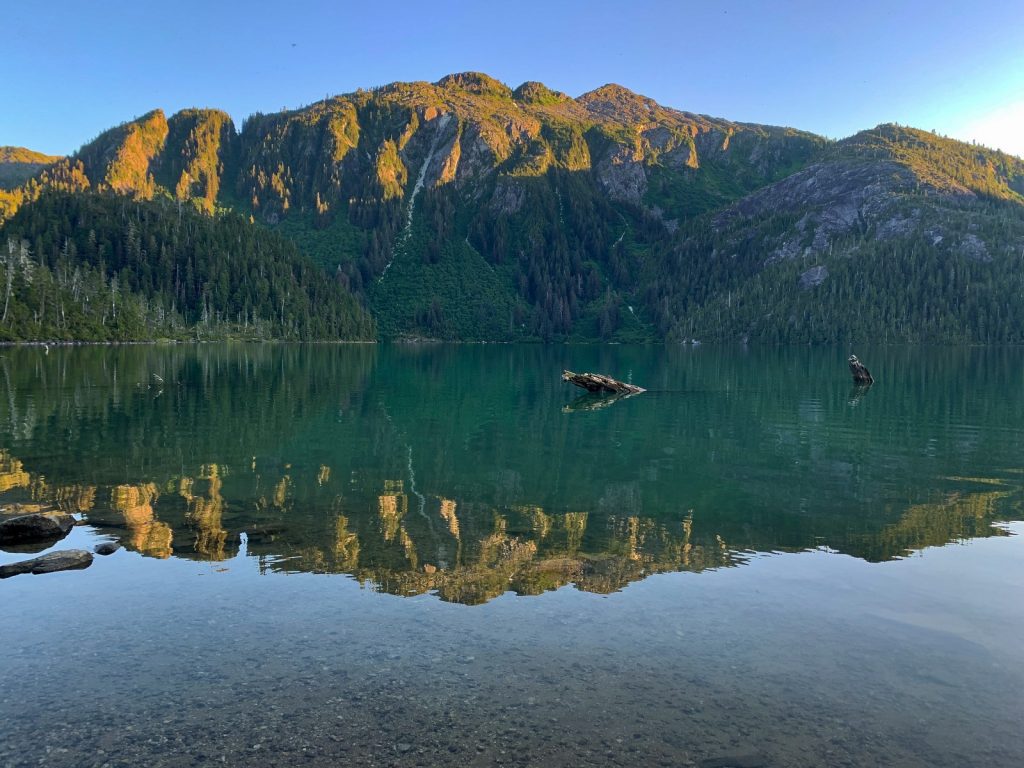 The lake at the top of the trail… seriously 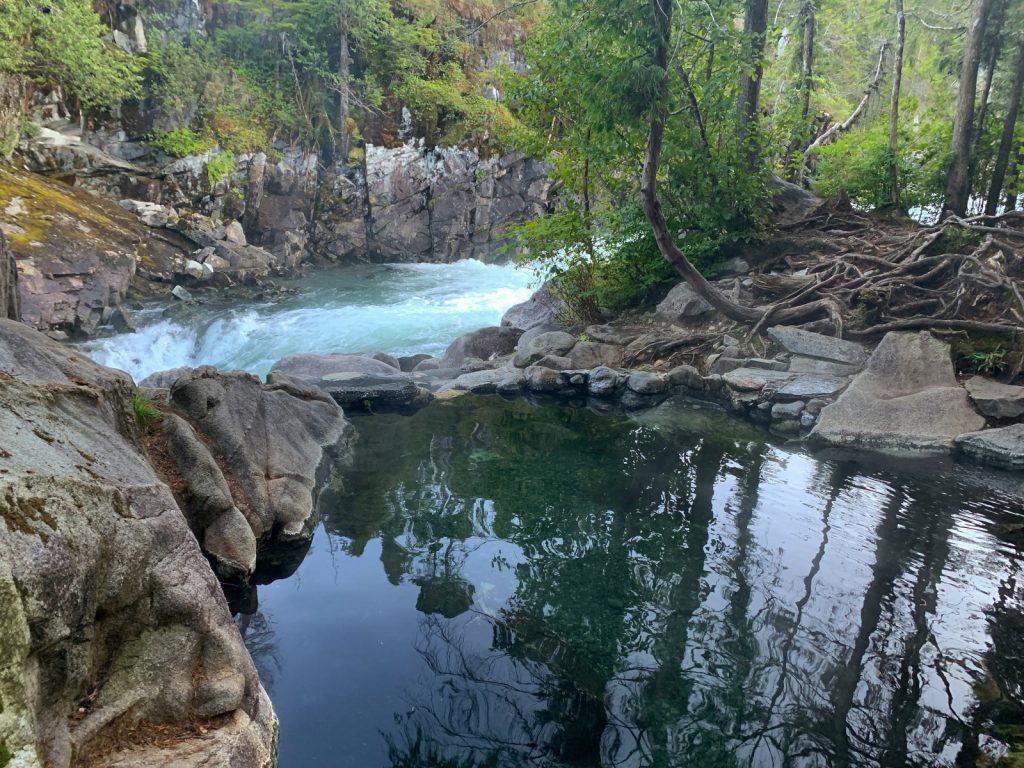 The natural springs overlooking the top of the falls… seriously seriously

Now, we are no strangers to hot springs, and have visited some beautiful springs during our time traveling. So, as we were soaking in there with the waterfall rushing past, we pondered where this would fall on the list. It wasn’t easy to rank them all (heck it was hard to remember many… a very privileged problem to have), but we eventually settled in on these being in the top-3 at the least. It’s pretty hard to top a natural spring on top of a waterfall, but in the end we actually preferred the man made tubs down below for the privacy and temperature control.

During our hike up to the natural falls that night, Kerri took notice of all the mushroom and berries lining the trail – even going as far as to fill her pockets along the way. Setting out the following day with a basket and an armed escort (she was taking the very food the bears eat) she picked enough berries to last us weeks… and more than a few mushrooms too. 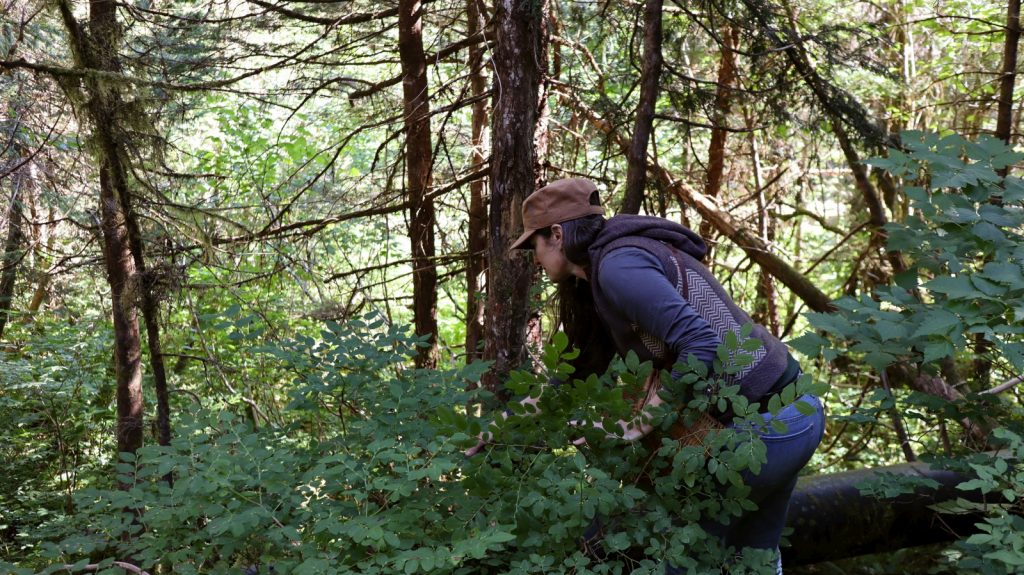 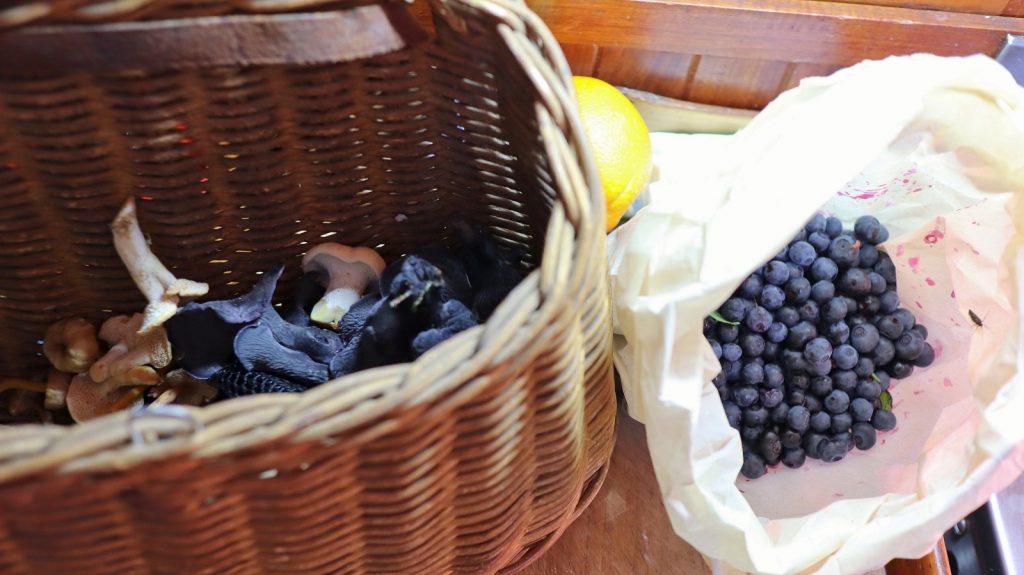 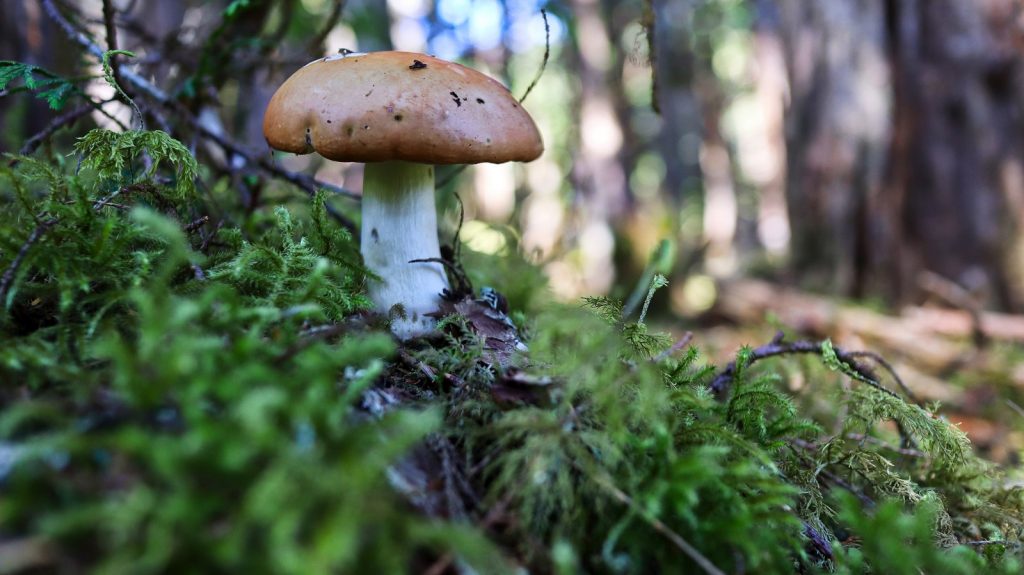 During the week the dock fill each day and mostly-empty the following, only to repeat every 24 hours. Ironically, it was by mid week that the cycle seemed to break, with not enough boats vacating each day. Super-yachts and large tour boats were anchoring in the small bay and fishing boats were rafting to others on the dock. It was becoming quite crowded all of a sudden, and to top it off the cell signal was growing weaker and weaker every day. Eventually we caved and decided to leave Warm Springs for another, more secluded, bay just up the road – where the cell signal was advertised as much stronger. 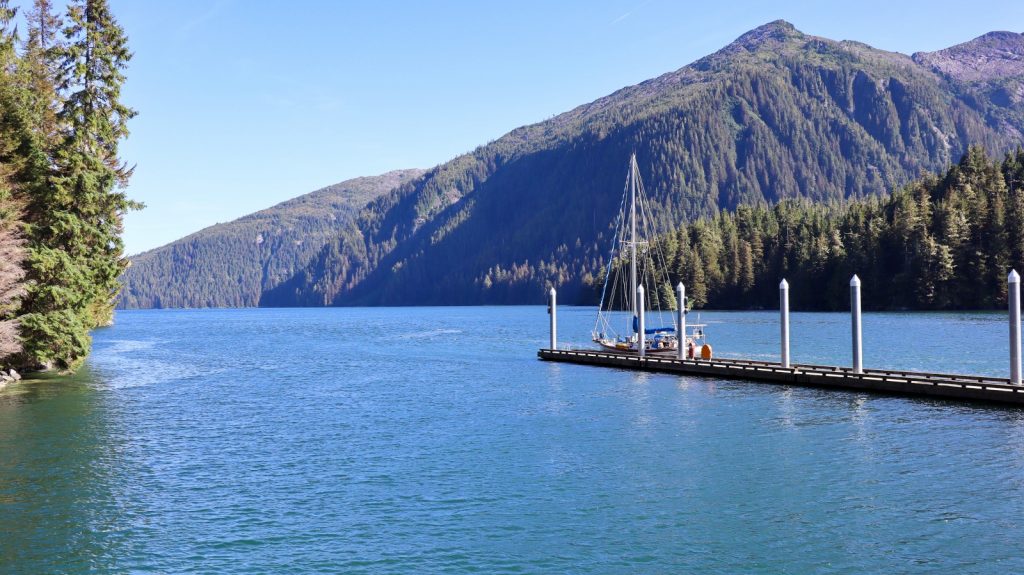 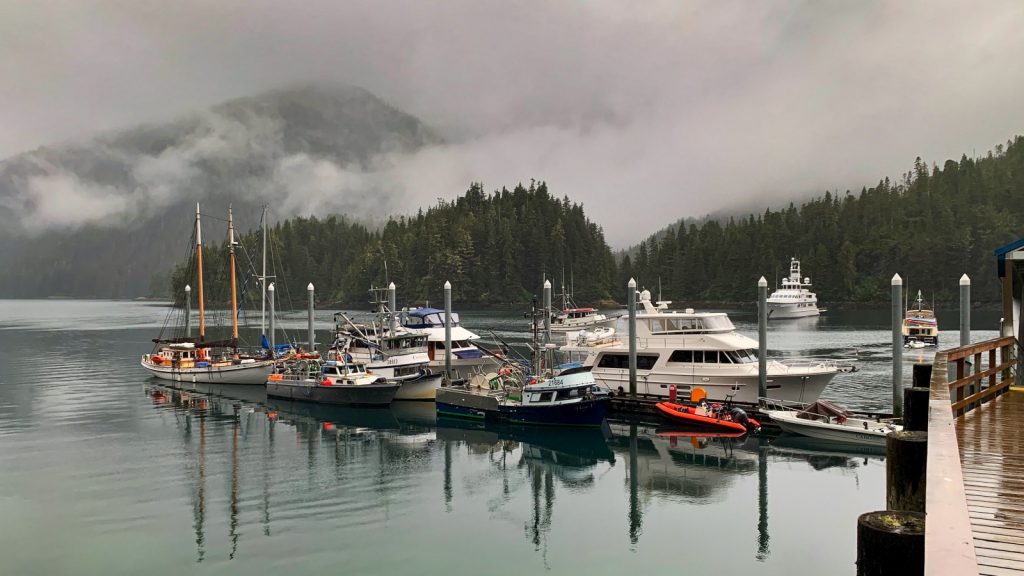 As if this scene wasn’t unreal enough on its own, it’s taken from the viewing window in our free private hot springs bathhouse room. We tied up to the dock at Baranof Warm Springs, got situated, and immediately packed up to head to the public bath house, with three private rooms overlooking the cove and waterfall, each with a huge bath tub that pipes in hot and cold spring water that you can control to your liking. As we headed up the dock toward the ramp, we were waylaid by a brown bear a little to close to the boardwalk and bathhouse for comfort. We waited a while for him to meander on, and found that the view from our bathhouse room look down upon the waterfall and bear, who remained for our entire soak.
There are people who would pay thousands upon thousands for this kind of experience, yet here we are. These baths are maintained by the residents here, with support of donations. The dock is $20/night to tie up to (or $80/week), though you can also anchor out. After discovering a week-long stay is allowed — AND there is workable cell signal here, we’ve decided to stay they week. Today, we’ll hike up to the natural hot springs. – Kerri