Before pulling into the next town for supplies we wanted to reconnoiter an anchorage that we hoped to spend the following work week at. The tiny cove is nestled among the Keku Islands not far off shore from Kake. Thwe name – Lord’s Pocket – made it sound even cooler, so we had to visit. Navigating through said islands, and through the rocky entrance into the cove, was exciting, but all went according to plan. 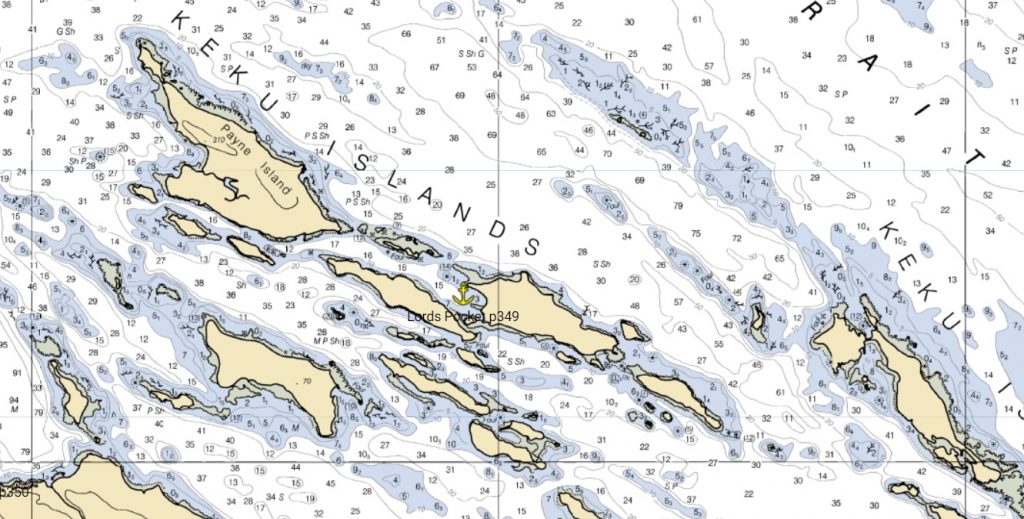 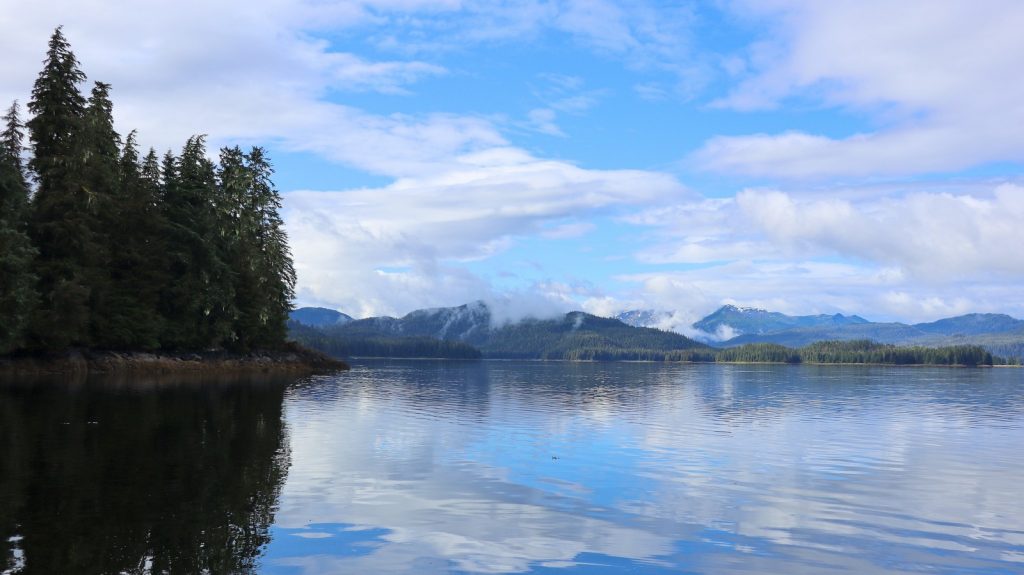 Once inside I came up with the idea of throwing the crab pot over before we got to the anchorage, saving Kerri some time in the dinghy. It was a brilliant plan, but our execution was lacking. Kerri’s slow deployment combined with my fear of tangling the line in the prop (extremely close to a rocky shoreline) made a for bad recipe. Add too it Kerri’s lack of memory on the length of the crab pot’s line, and we got it all wrong. We launched it off the stern and watched the buoy sink under the water and out of sight. Apparently, we did not have line long enough to handle the 90 foot depths. Disheartening to say the least. 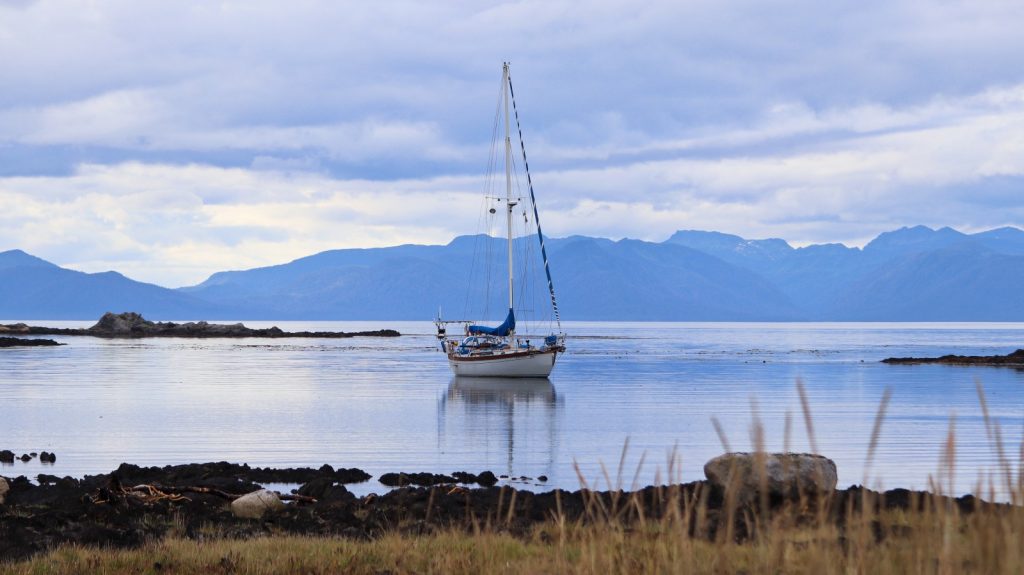 Try we did, but the recovery failed

On the bright side, the anchorage was fantastic. We even had a cell signal from Kake! So we hung out, toured the a couple of the other islands via the dinghy, and got all the plans ready to make a two-day dash into town for supplies, and to avoid a big blow coming through, before returning to this very spot for the remainder of the work week. On our way out, at low tide, we spotted our crab pot buoy under the surface of the water and spent a half hour circling Meriwether trying to hook it with our dinghy anchor, but eventually gave up. Meriwether does not maneuver well enough at slow speed for something like this.

At Kake, we arrived to the fuel dock first. The actual fuel dock was damaged some years back and has yet to be replaced. So, the local fuel station delivers fuel to a neighboring dock via a truck. One only needs to call ahead and place the order, which we did. A quick walk to the only grocery store in town was shortest from said fuel dock, so we took advantage. And wouldn’t you know it, our first bear sighting (right off the roadway) other than the bears at Anan. 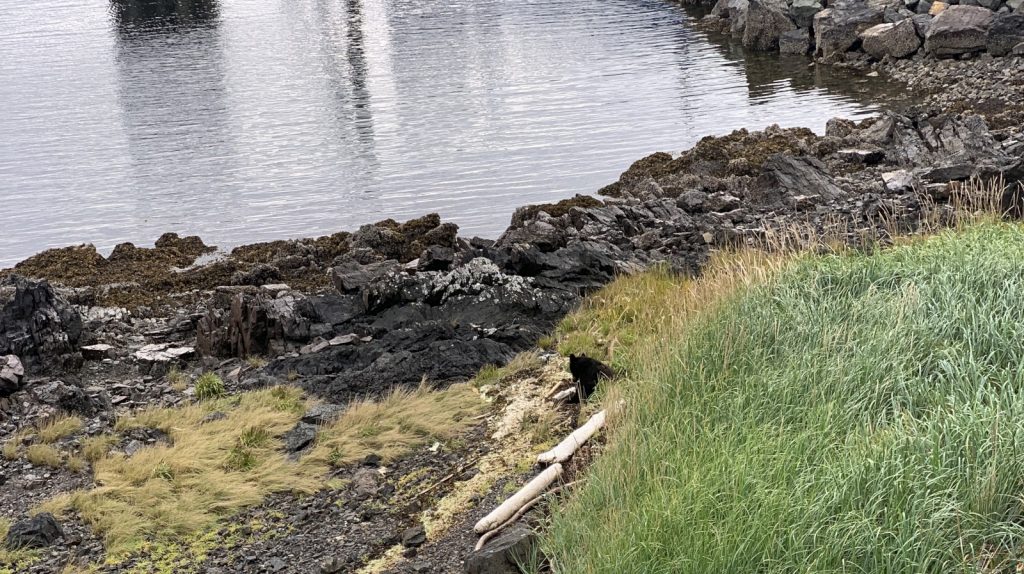 Then north to the main city dock, 1.5 miles away, which had water and access to the only liquor store in town – a must of course. Here we stayed a single night under the totem pole and the saintly cellular tower. 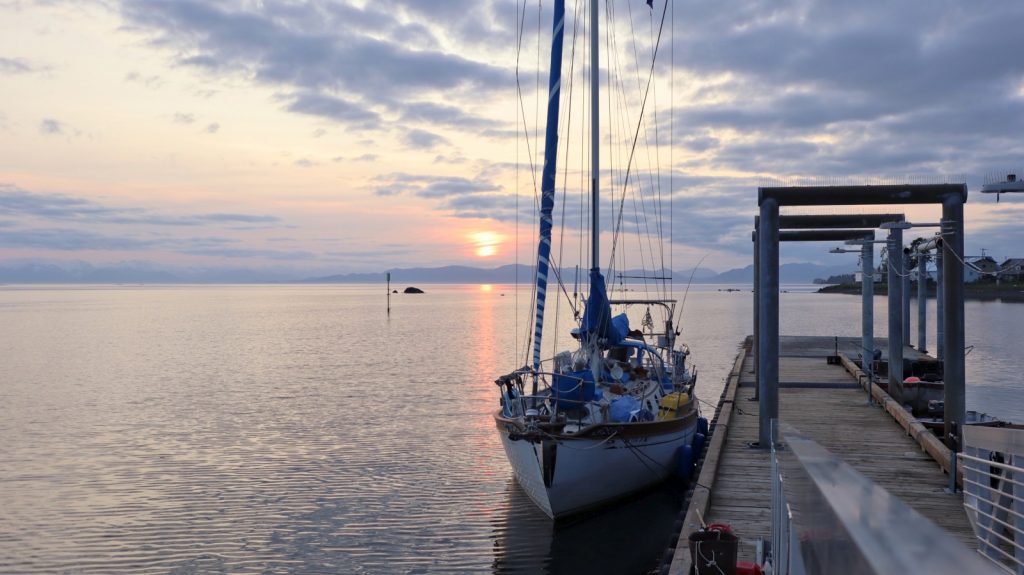 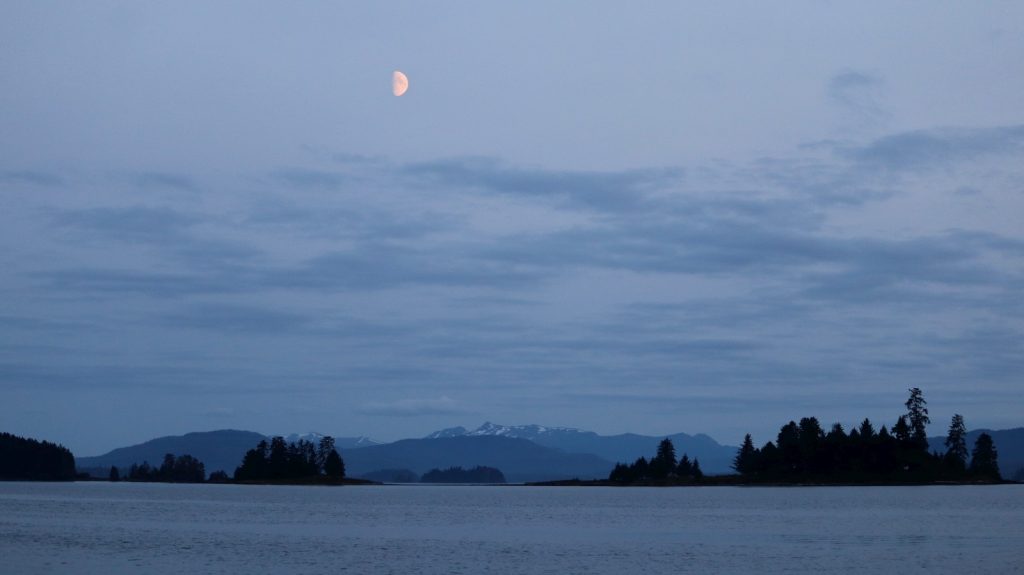 The following day we motored the 2.5 miles south to the actual marina, where there was electricity (our battery bank was hurting), laundry, and a hot shower… or not. The hot water was not working, so only laundry got done. It had already been well over a week since our last hot shower, but the upcoming weekend would provide.

{as usual, we fail to take a singe photo when at a marina}

With the storm passed and the majority of a work week still ahead, we left Kake to return to Lord’s Pocket. Once again, the anchorage was beautiful and peaceful. We were visited one morning – early – by a few humpbacks that were passing by. One even came into the anchorage for a few moments. I was so hopeful he/she would come to Meriwether, but did not. We were also on a crab pot rescue mission and had a couple ideas, which all failed miserably in the end. We did have to give up on it by Thursday. 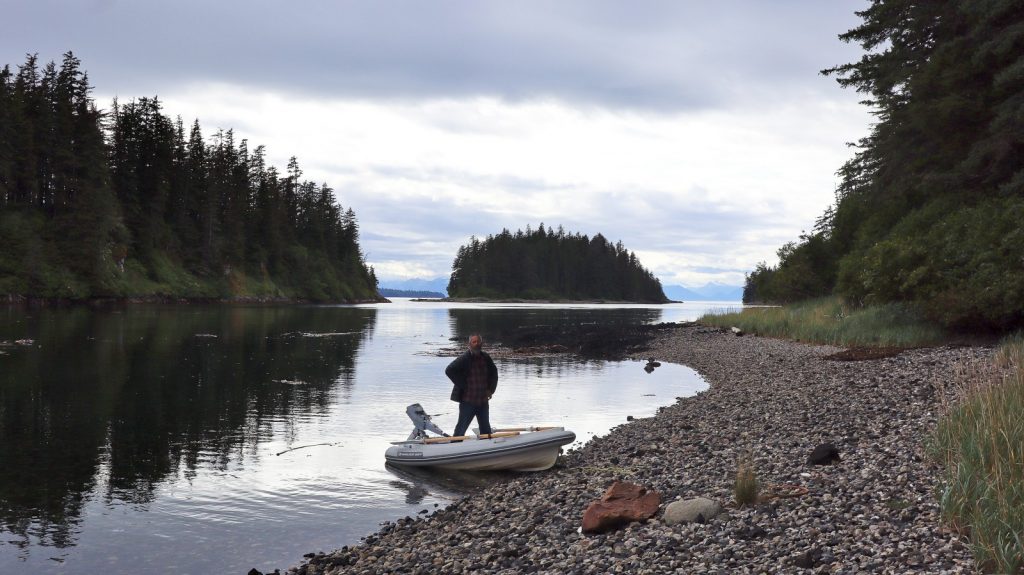 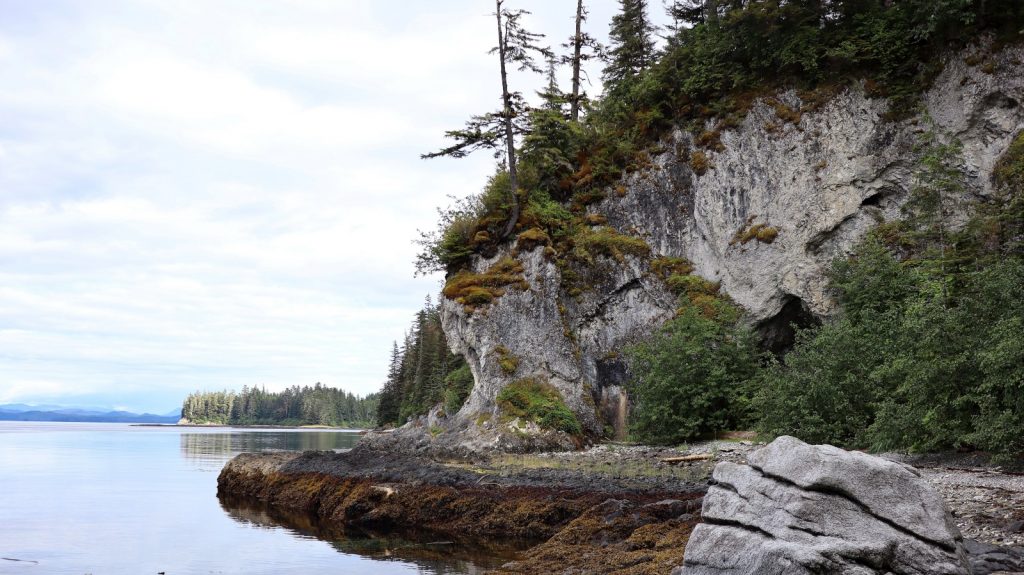 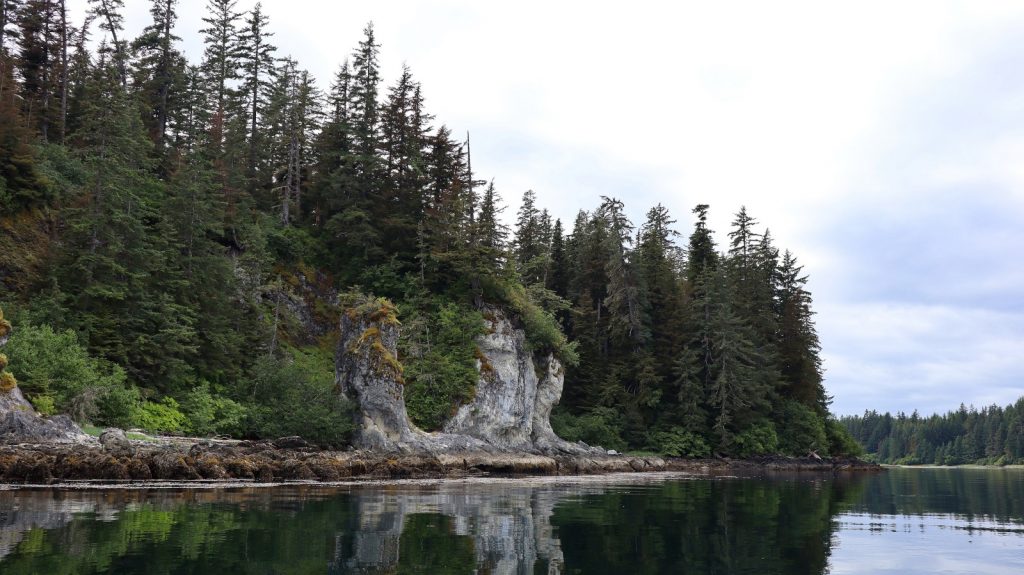 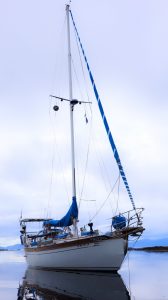 I typically don’t find dockside moorage to be the more scenic of the places we stay, but the city dock at Kake has spectacular panoramic views, and gave us a long, lovely pastel sunset last night before the storm started up today. Rudy, a Kake resident and city worker came by to give us the rundown on town, ask us a few questions about what we think cruisers want to see out of their town, and have us sign a letter expressing our support for funding dock improvements. He told us some history of the town and how the tribe used to be scattered throughout the islands until most ended up here in OVK (Organized Village of Kake). (Come to find out after later research, no surprise, in part because the US Navy destroyed three of the other Kake villages). He pointed out the group of islands across the way, which host their burial grounds. In the other direction toward land, on a hill above the liquor store and next to the cell tower (the main public businesses in town comprise of it, a market, and a fuel station) is what was once the World’s Tallest Totem Pole, but the top fell off a few years ago, so now it’s the World’s Third Largest Totem Pole. Not a bad run for a totem that was erected in the seventies. – Kerri