Living off the land and sea in Portage Bay

When we pulled into Portage Bay, fairly late on a Sunday afternoon, we thought it would only be an overnight stop. Portage Bay isn’t the most scenic place, nor is it super-well-protected from the weather from the South or North (a few-miles-long bay can still allow the wind to howl through), it did have that one little thing we need to spend more than a single night; a cell signal. We haven’t had many (any?) anchoring over work weeks since arriving in Alaska. So much time has been spent tied to a dock in each town that we were desperate for some extended time out on the hook. Portage Bay was inviting us to stay longer, and we gladly accepted. Kerri immediately dropped her crab pot and a few hours later had fetched a nice couple-day supply of fresh crab. 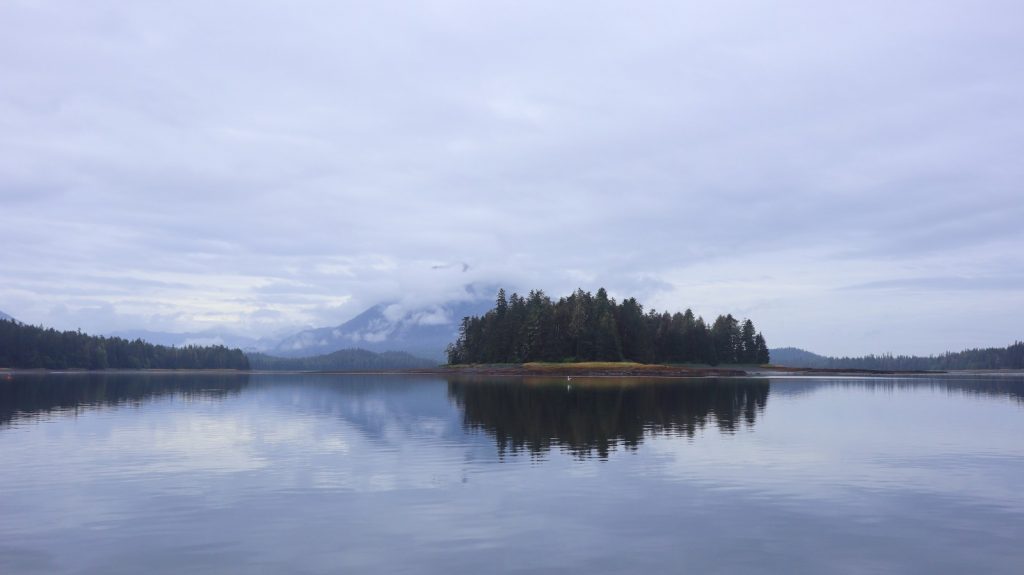 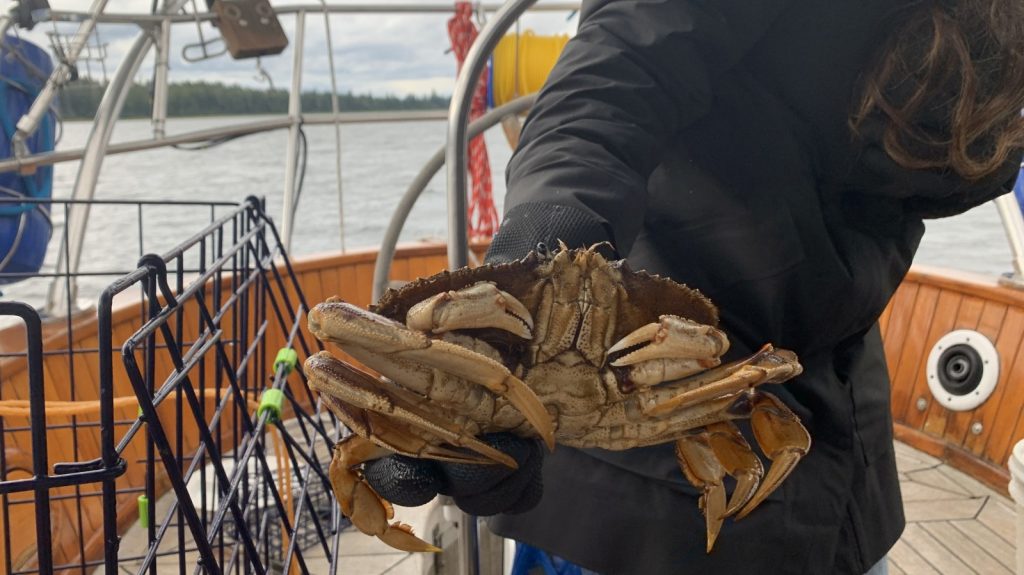 Our view was Stop Island a mile to our south and the 3700 foot tall Duncan Peak even further past – looking ominous with clouds lingering at it’s peak all times. Kerri’s scouting of the maps found that a forest service cabin was another mile down the bay. It has been some what a tradition for us to go visit the cabins in our anchorages, if for no other reason than to get us out and off the boat. They also tend to have trails leading off from them, and my girl wanted to hike one morning. We landed our dingy and trekked to the cabin, not finding any trail, but we did find a tree with a large infestation of fungus that even I recognized. After a quick tour of the cabin (visitor logs went back as the 1980’s) we – by we I mean she – got straight to chopping some of that fungi for future meals. Between the crab and the mushrooms, our fridge was overflowing with food (that I won’t eat). 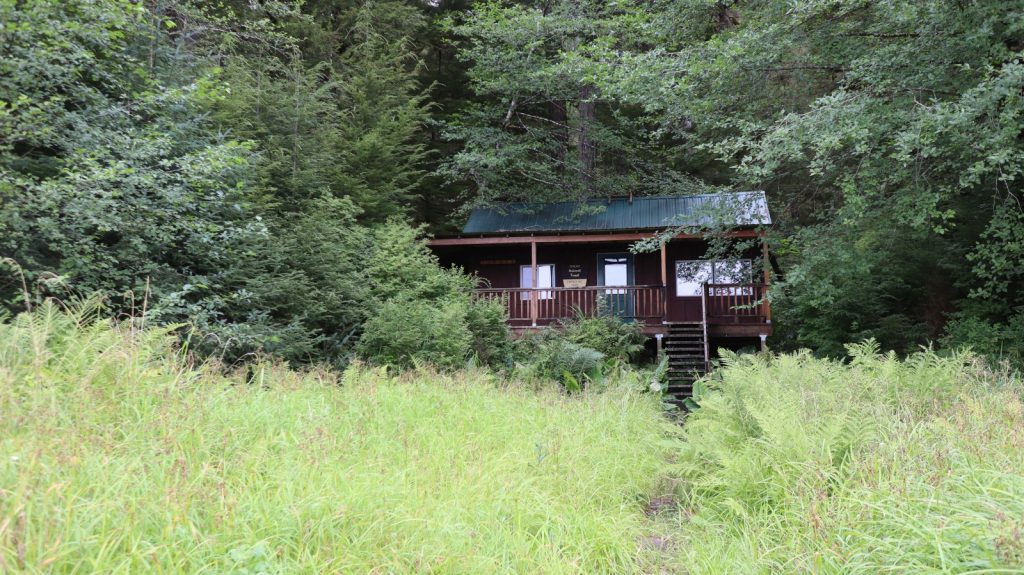 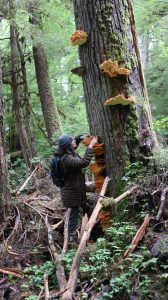 Unfortunately, by Wednesday morning the cell signal that started out so strong and vigorous, had dropped to a weak and sickly signal that was no longer cutting it. We had spent a couple hours repositioning the boat (repeatedly) in search of a better signal, but by noon we had to call it gone. Instead of  wasting more time, we chose to tackle the 40 mile run to get us to an anchorage just outside of Kake, AK where we planned to stay for the following week anyway. At the very least there was wind blowing the correct direction for me to sail while Kerri continued to work on some offline projects down below.

At about the mid point of the trip we sailed straight into a huge pod of humpback whales dinning. Now, we have seen a humpbacks in the past, but never this many, and so active, in one place. Dozens, at least, all around the boat at a distance.  We slowed our pace and just took the time to enjoy them for a half hour as we passed by the feeding. 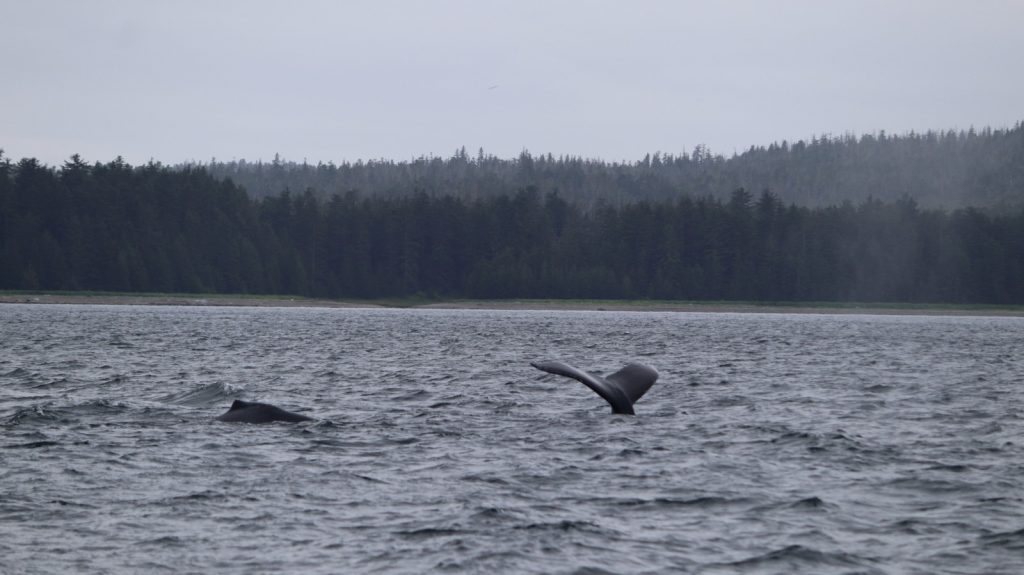 The wind picked up for our final leg of the voyage, with gusts nearing 30 knots as we rounded the cape and into the Kake area. We pulled into our anchorage, dropped the anchor, and called it a day after eight hours of travel. At least the cell signal was better here – by a tiny margin – allowing us to stay put for a few nights to catch up on the lost work.

We finally (thought we) found an anchorage on Sunday that had enough cell signal to allow us to stay through the workweek (and wait out some blows). Monday checked out fine, Tuesday worked well, but then by today, it all went to sh!t (the cell signal, that is), and we hightailed it (motoring, so I could still work without a heel) into 20+ knot winds (we’re still motoring now). We did get a chance to at least explore one of the local forest service cabins (they’re everywhere around SE AK!), and found the mother lode of Chicken of the Woods mushrooms (first edibles I’ve found since we got here). I took maybe 1/20 of what was there. Also found a handful of Yellowfoot and one tiny Hedgehog. Looks like the season’s starting up here! Or ending. I don’t understand anything about Alaska, really. – Kerri