An amazing forecast for the weekend, prompted Kerri and me to head out to an anchorage for a few days. Somewhere close though, just to give Meriwether a shake-down without a huge towing cost if it becomes needed. Plus, the next closest anchorages were many hours away. But, just south of Hoonah is a waterway – Port Fredrick – with a few nice anchorages which we had not yet gotten to explore, so one of those became the destination. 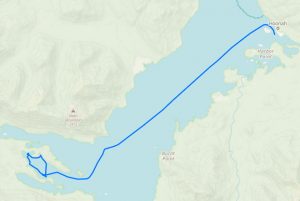 T’was a brisk morning, but Alaska was putting on a show with the blue skies (which we hadn’t seen for some time now), snow-capped mountains surrounding us, and glassy waters ahead. There was no hope of any sailing, but running the engine for a couple hours was exactly what the doctor ordered. The transit was uneventful with the autopilot doing all the work while both of us just soaked in the sun – literally. A single whale kept us company for a few minutes, then disappeared under the surface never to be seen again (how do they do that?). 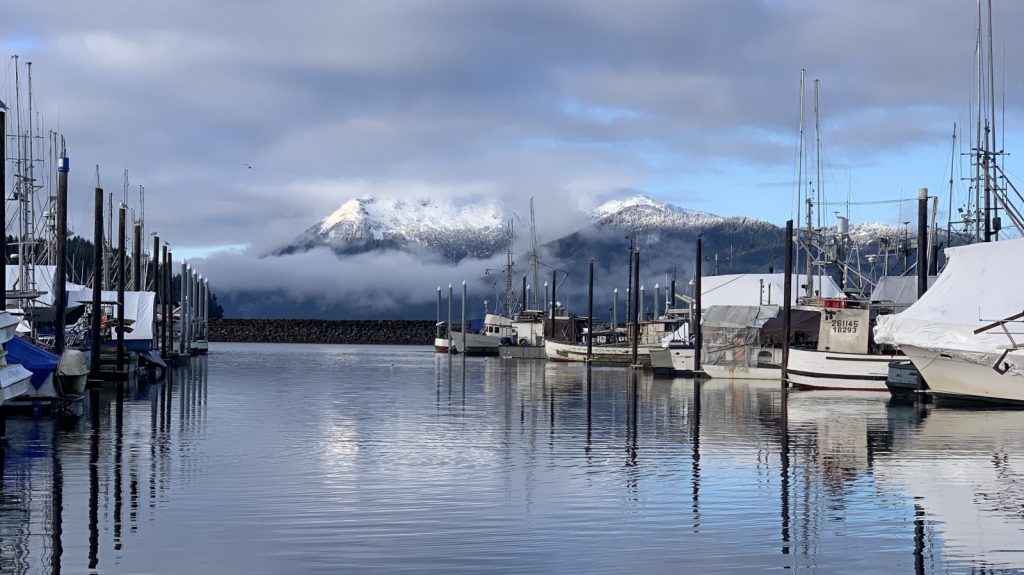 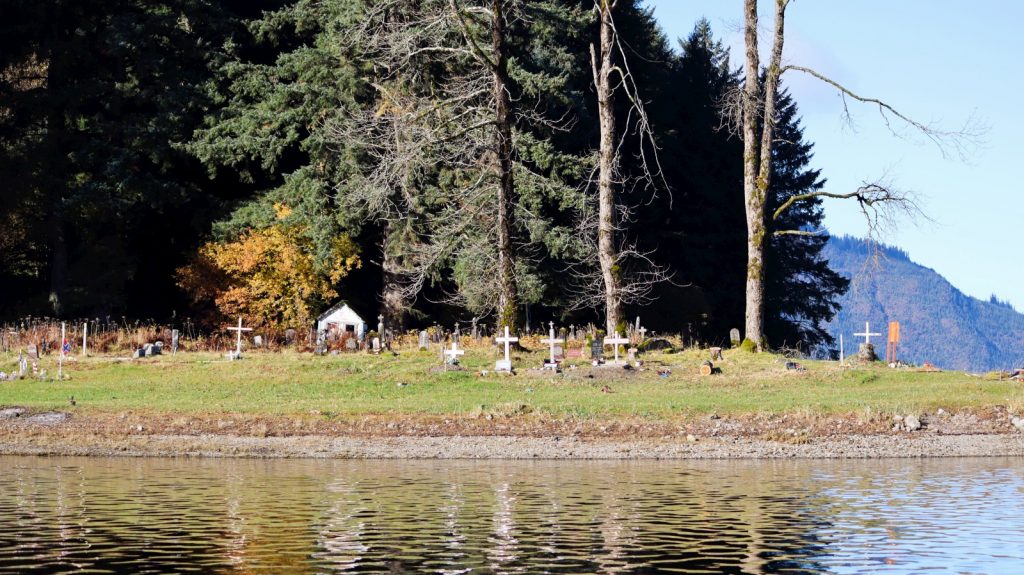 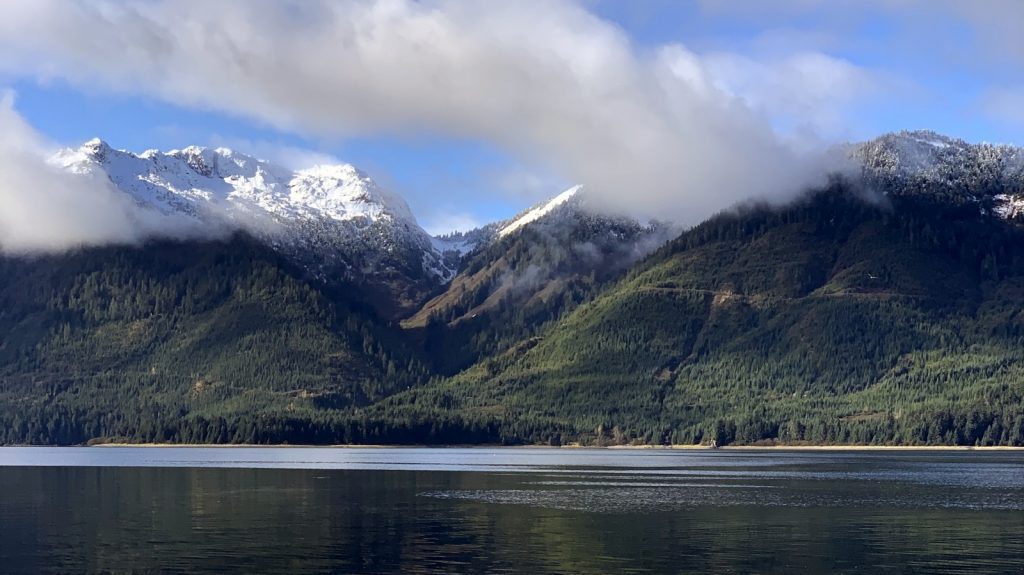 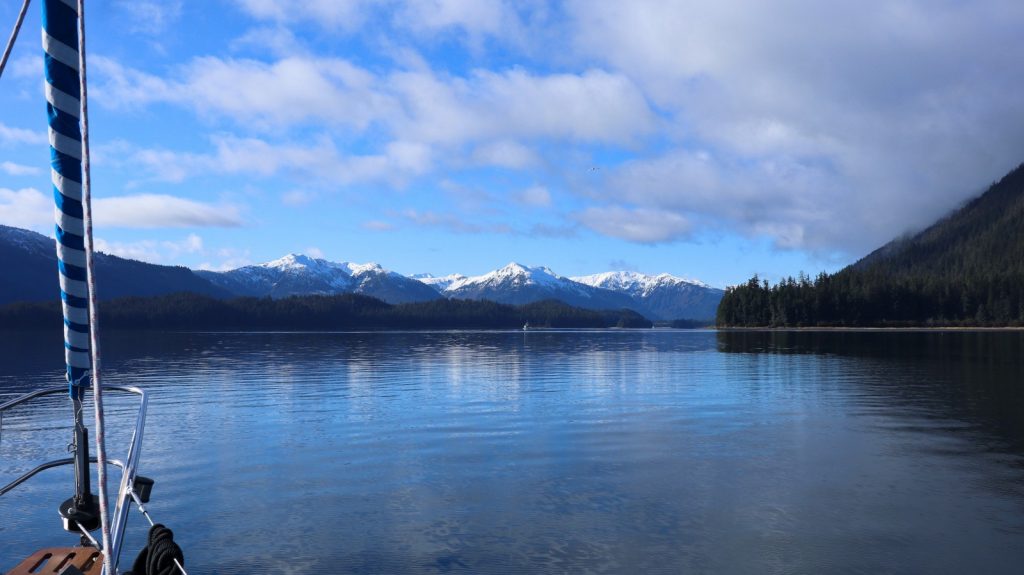 A couple hours later, we arrived to a completely empty anchorage under a massive snowy mountain and dropped our anchor for the first time in a what feels like eternity. Unplugged from shore-power, we quickly had to light a fire in the wood stove just to stay comfortable. We brought a full large-bin full of wood, as well as three Ikea bags full of wood under Meriwether’s sole (floor). we quickly realized that this may not be enough, even for the three days we wanted to stay out this time. Plans were made to scavenge for firewood the following day.

By afternoon Kerri got to dropping our crab-pot to see about catching a meal. Spoiler alert – she caught nothing more than a few small crabs and a baby halibut. All were released and we ate from our own stores instead. 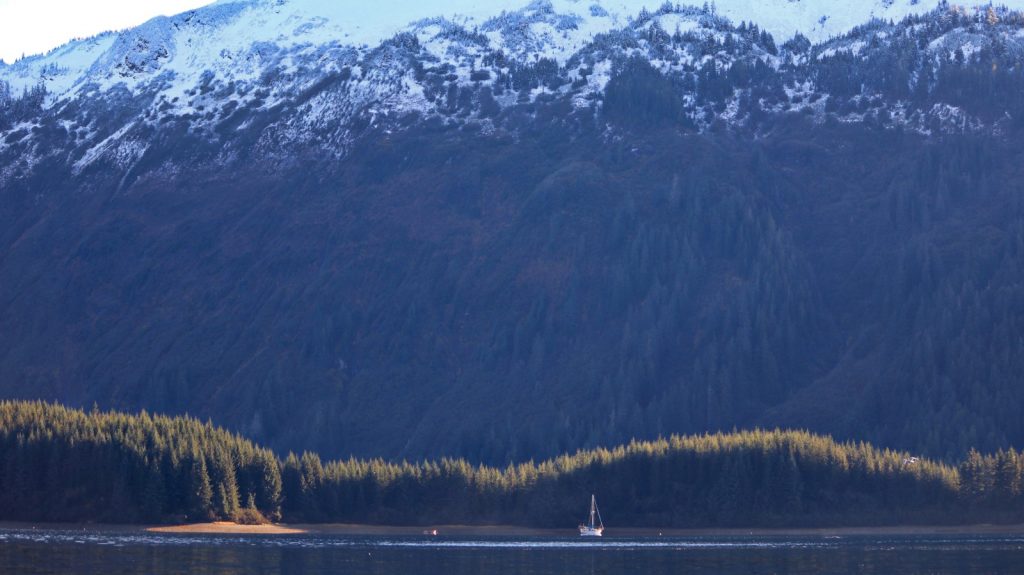 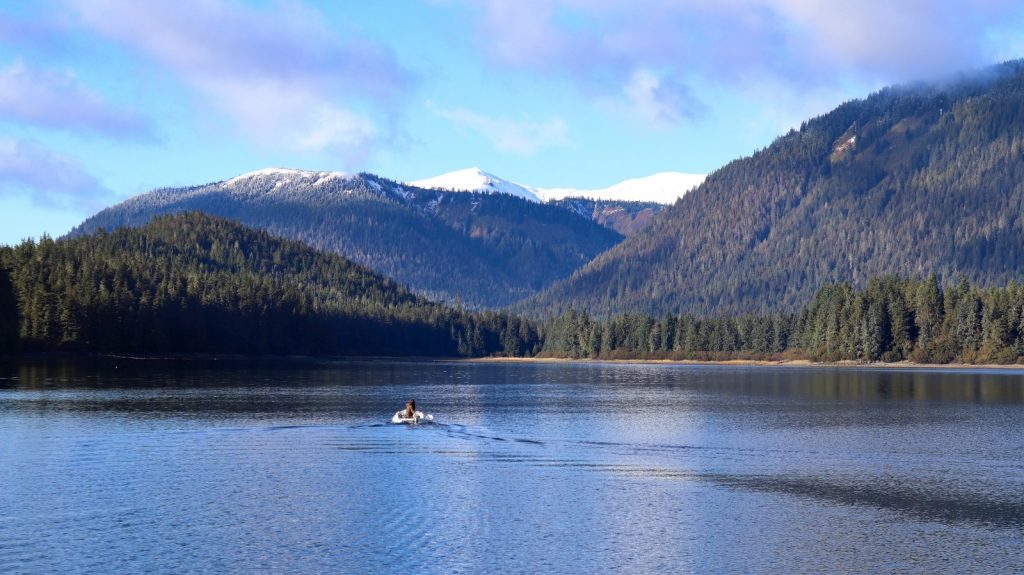 For the next two days nothing much more happened. We had little to no cell signal, so our attentions were directed at each other, not our devices. We took the dinghy out to explore the bay and even found a tree worthy of pulling the electric chainsaw out to chop up as much as we could. I was over dressed for the activity, eventually stripping down to just a T-shirt even though the temperature outside was barely into the 40’s. The wood was still wet from the past weeks of rain, but placing a few logs in front of the wood stove while a fire raged would solve that. We just had to keep feeding the assembly line; dry logs, place in fire, dry more logs, repeat. 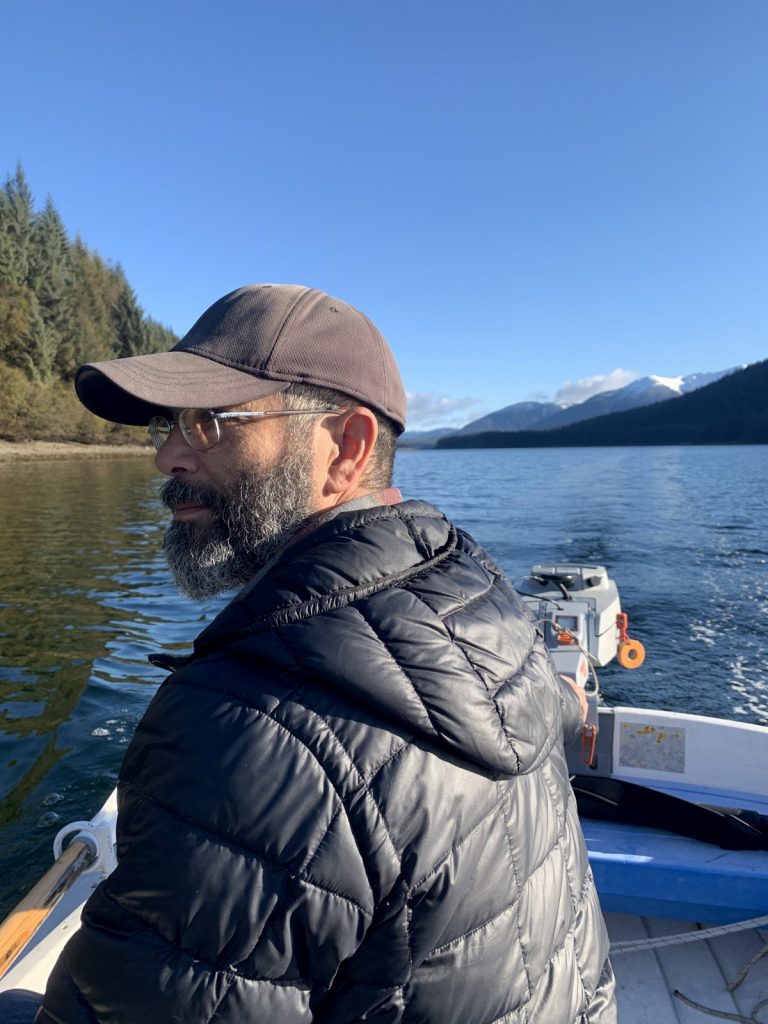 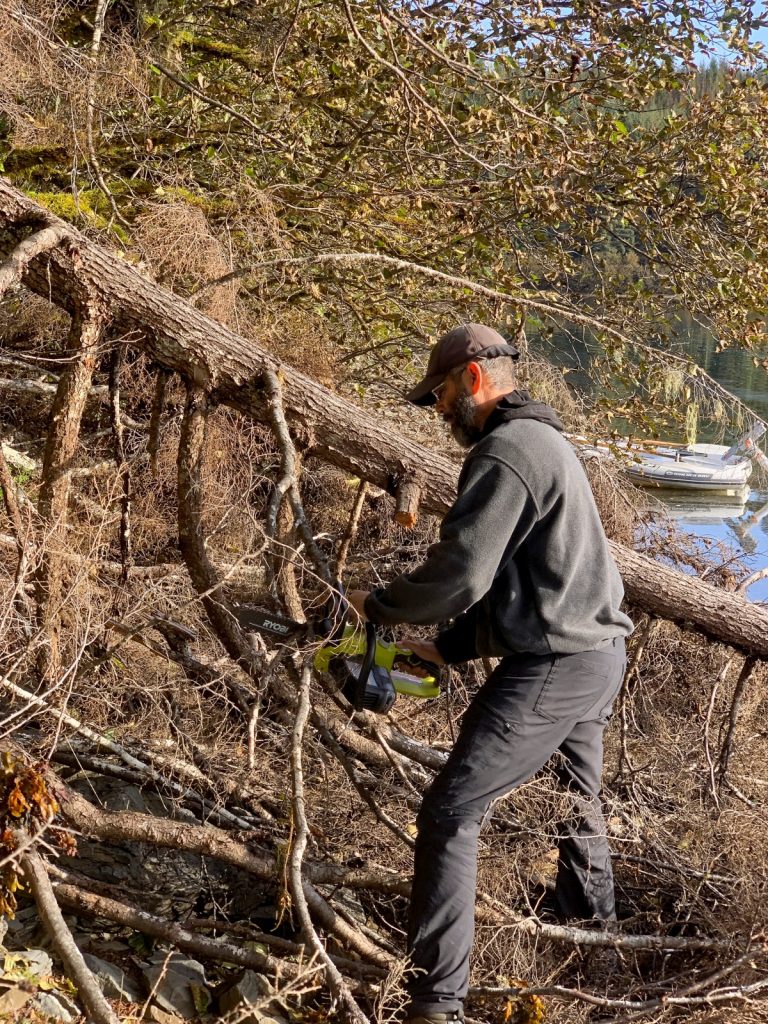 On morning-two we woke to Meriwether completely covered in our first frost of the year. The little wood stove kept us insulated from the biting cold. Kerri tried some more crabbing. I baked a loaf of bread. We just simply relaxed in the peace and quiet of Alaska’s picturesque wilderness. Seriously, every time I looked outside, our surroundings were a straight out of a painting. We desperately needed this vacation from the marina-life, we didn’t even know it. It was a good shake down of the engine repairs as well, bringing a bit more peace of mind and confidence to me after the beating from the past month. 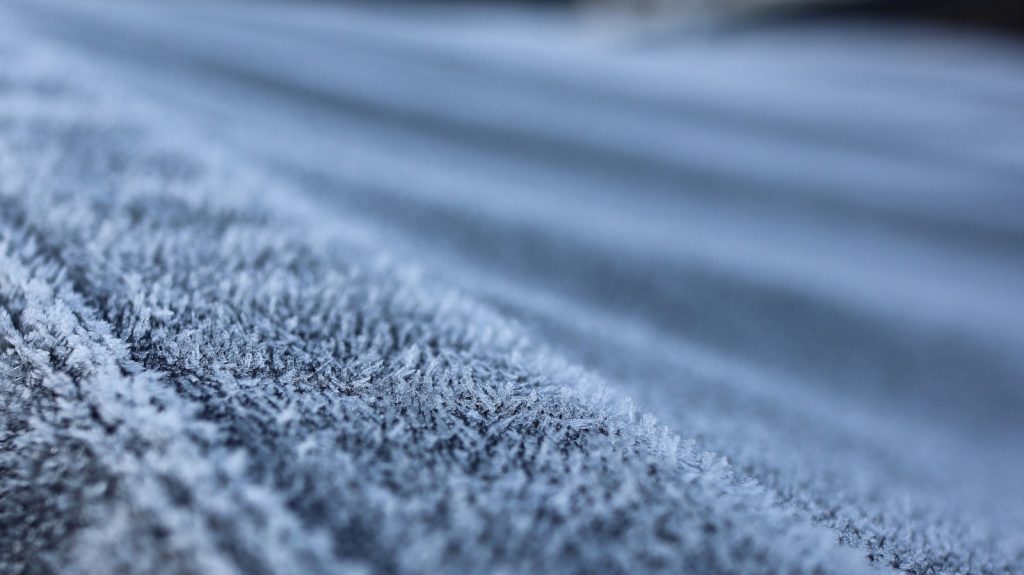 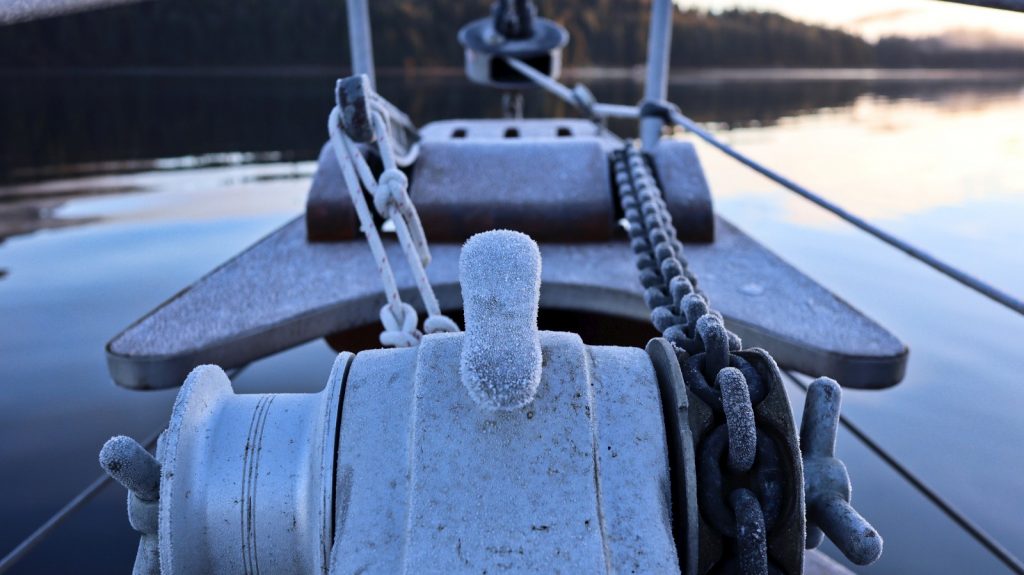 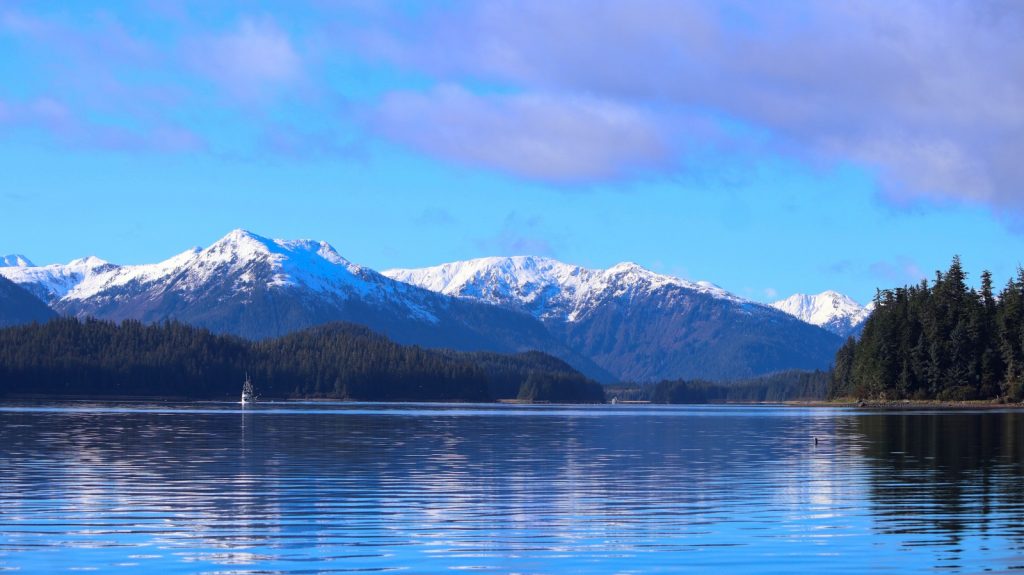 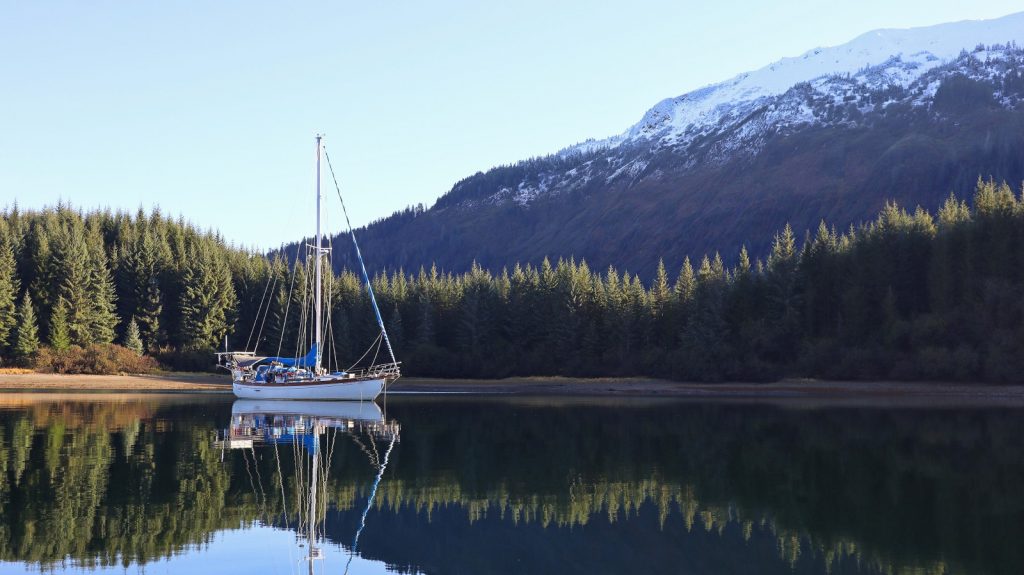