There were only two days before our reservations at Boston Harbor Marina so we didn’t want to go too far. Kerri found a new anchorage for us just a few miles away that would suffice. With sails already at the ready before the anchor was stowed, we sailed away from Hope Island, slowly. The wind was extremely light at Hope, but I was determined to sail point to point this day. The first 10-15 minutes we just floundered in the current, at least carrying us somewhat the correct direction through Squaxin Pass. Eventually though, the wind would come along and fill the sails. All was progressing nicely with a few tacks here and there to keep us on our course. 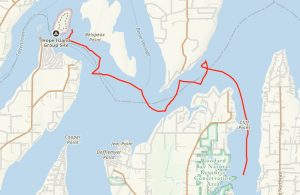 At Dana Pass,  where I knew the canyon-like geography would funnel the wind a particular direct, things got exciting. Boat traffic through the pass was heavy, full of other adventure seekers and fisherman. The winds were blowing nicely and we had some heel on. All until the other side of the pass, where the wind stopped completely – like zero-point-zero, dead. We were so close to our destination and I desperately wanted a day without waking the old Perkins motor. So we sat there, drifting with the current – now running the wrong direction for us – waiting for even a gentle breeze to carry us into Henderson Inlet. After a half hour of drifting, we finally had to crank up the motor and get to our destination. 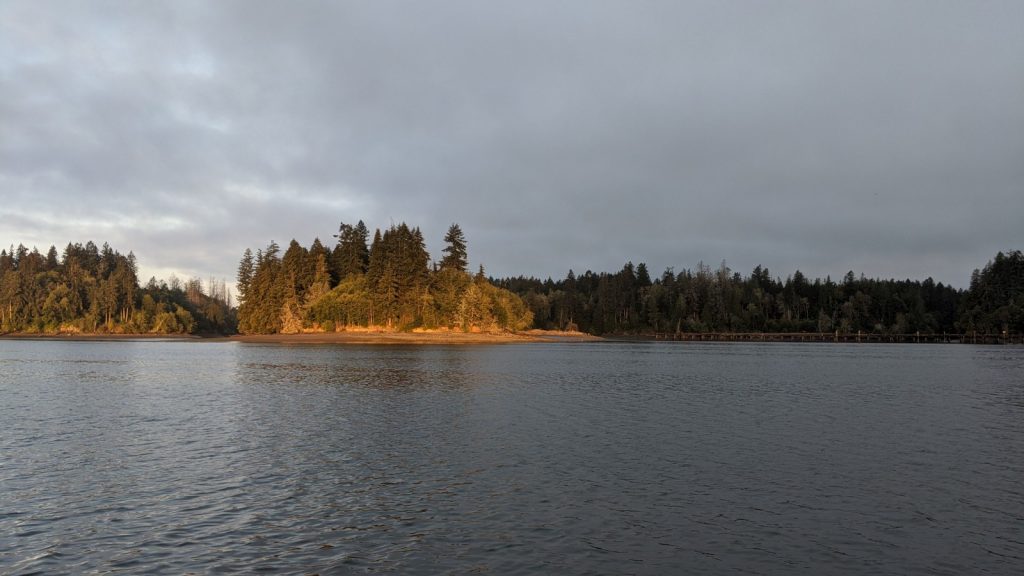 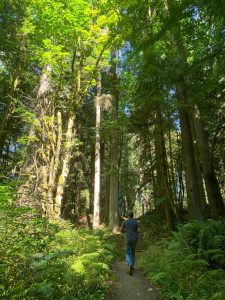 We arrived and dropped anchor a fair way into Henderson Inlet, just off the shoreline of the Woodward Bay Natural Conservation Area – a sanctuary for “shorebirds and songbirds, harbor seals, river otters, bald eagles, a large maternity colony of bats, and one of the most significant heron rookeries in the state“. We would take our dinghy up the tributary and into the conservation area. Here we would beach the little boat so to hike the trail, which would lead us out to the old railroad pier where many of the seals hang out. The forest was another fine PNW forest and it felt good to be out there among it. The trail was neither long or difficult, which I am grateful for as aching bones are a daily part of a sailors life. Over the couple days we hung out in this amazing area Kerri and I concluded that it was our nicest anchorage in the south Puget Sound, and luckily no one else comes here. 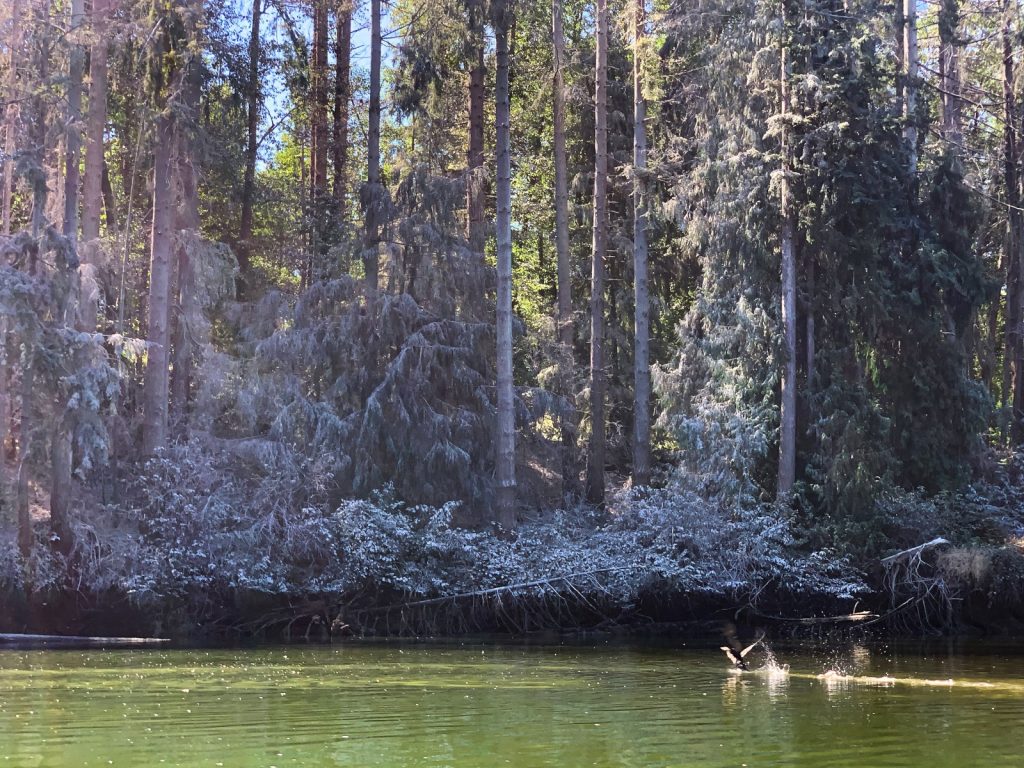 It isn’t snow, but “frosting” from hundreds of bird nests in the trees above 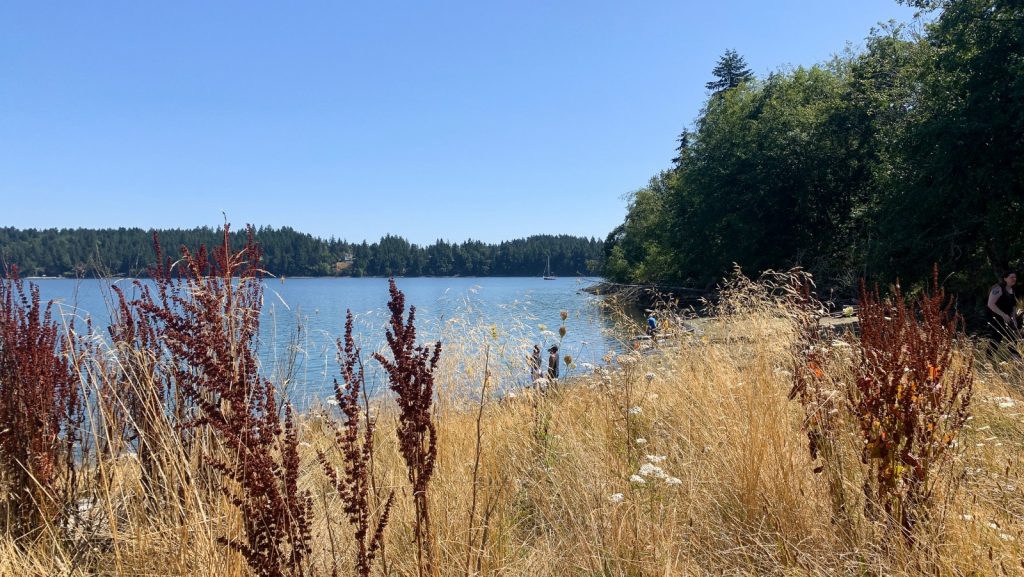 Meriwether, all alone in the anchorage, just as she likes it 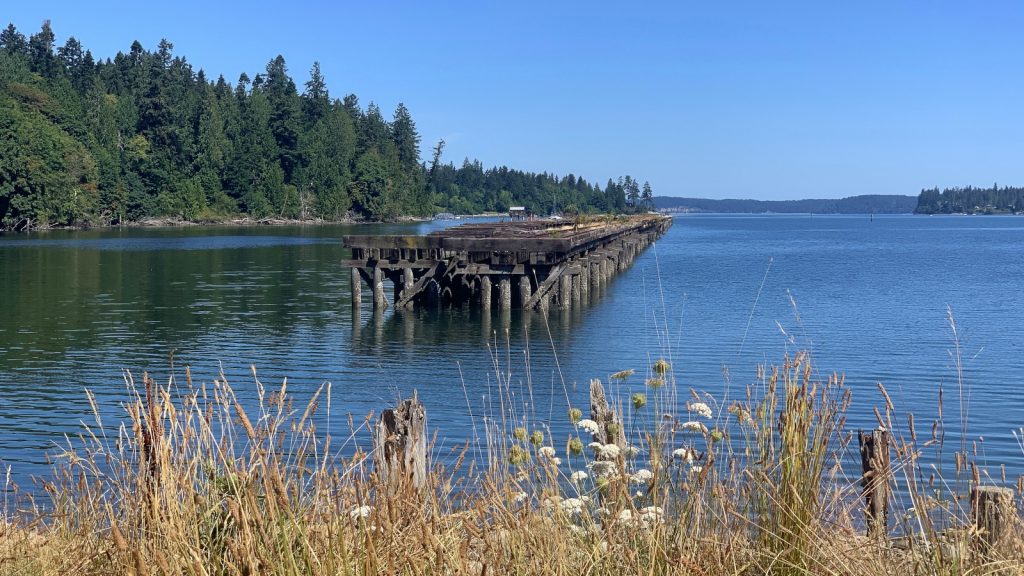 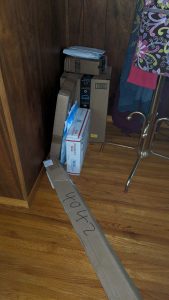 We had to move on after only two nights in Henderson, only to go back through Dana Pass to the tiny marina at Boston Harbor. Here I would rent a car to run the monthly errands in which our lives require. This turned out to be an extra ordeal this time, including them calling my Mom for a referral! Seriously, I’m nearly 50 years old and they wanted two referrals to rent me a stupid Nissan. It was easier and less paperwork to get an out of state conceal carry permit (since it is obvious we will be here for a while longer) than renting a car this time around. That’s how bad it was; when government bureaucracy is easier then your store policy, you know you are doing something wrong. Just sayin’.

The first day, while Kerri stayed back on the boat working, I tackled the normal todo’s (groceries, etc), and a huge pre-ordered pallet of booze to pickup from Total Wine. The second day I drove the 45 minutes to visit with my Mother and pickup the tons of new gear we had shipped in to her place over the past weeks, which included new oars for the dinghy (yay!). Two and a half days after arriving in Boston Harbor – and not taking a single photo, because tied to a dock is not photo-worthy – we left, only to return to Henderson Inlet to get a few more days of ‘peace and anchor’ (that’s going to be our new motto) before starting a huge weekend of sailing necessary to keep yet another appointment. Us nomads are not good having looming reservations… too much stress. 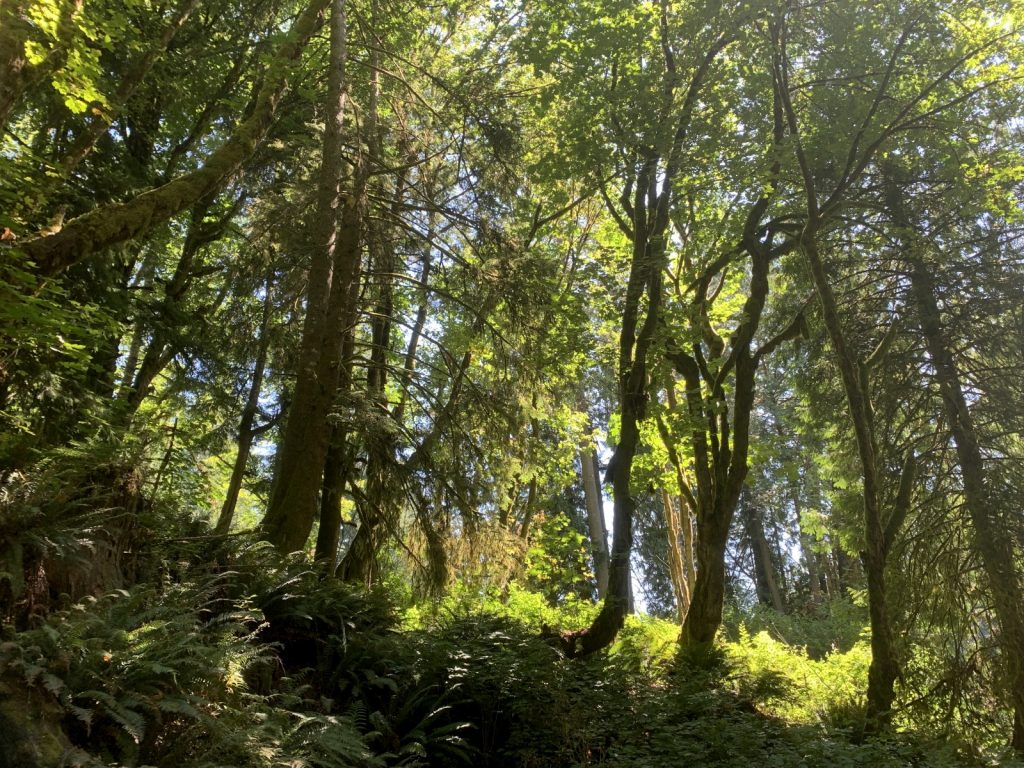