Sailing down the west coast, pt 1

A quick road trip – thanks to a borrowed van from good friends in PT – to pick up my Nephew down near Bainbridge Island also resulted in the last minute purchase of a second hand whisker pole (carbon fiber pole I might add, super cool). Combined with all the boat work – planned and unplanned – over the last two weeks, and additions to the boat, we were ready for the big sail down the West Coast with sights set on being in Mexico by winter. 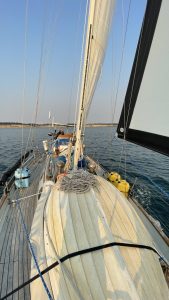 he moons had aligned for us to start our voyage, with the tides providing a nearly 16 hour ebb current exiting the Strait of Juan DeFuca. What flood current there was, lasted only a couple short hours and was minor. This gave us a huge advantage to getting out to the Pacific Ocean. Only down side; that ebb would begin around dinner time, requiring an overnight passage no matter what. Although, with Cameron – my Nephew – onboard as crew things would be a bit easier then our previous overnight sails.

Within minutes of leaving the marina we had the sails up and headed towards the greater destination of “south”. We knew the wind would die off for overnight, but for the first few hours we got to sail, although not particularly headed in the right direction. We sailed for 30 miles, but as predicted the wind tapered off as we neared Dungeness Wildlife Refuge and the Perkins took over as the sun had just truly set. While the wind was forecast to be at our backs after the few hour lull, I did not believe it at the time. Only once it actually showed up, did I begin to have some hope. With Kerri off watch, Cameron and I got back to the sailing. That three hours would be the extent of the use of our old Perkins until we approached Neah Bay, after over 100 miles that overnight. 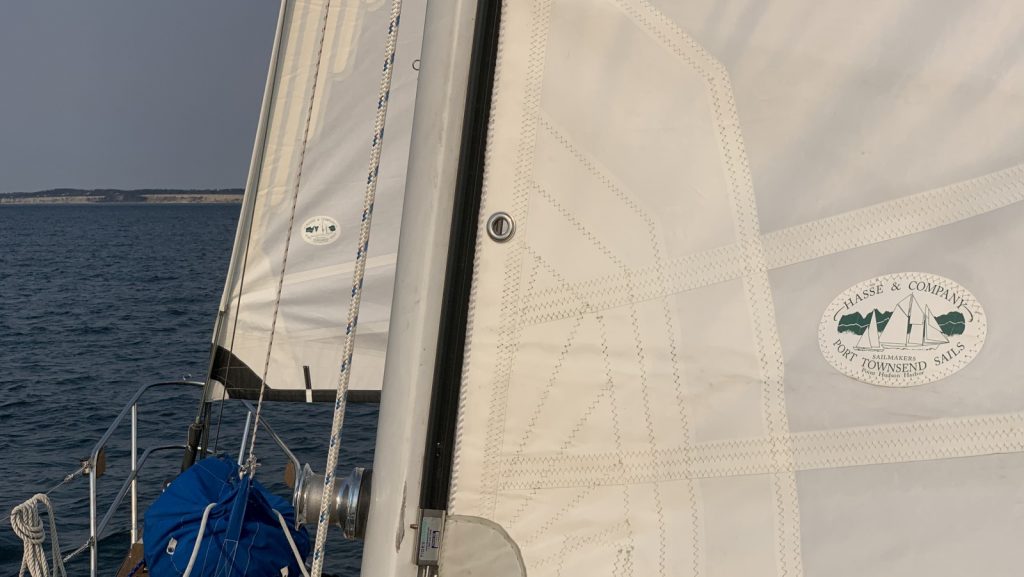 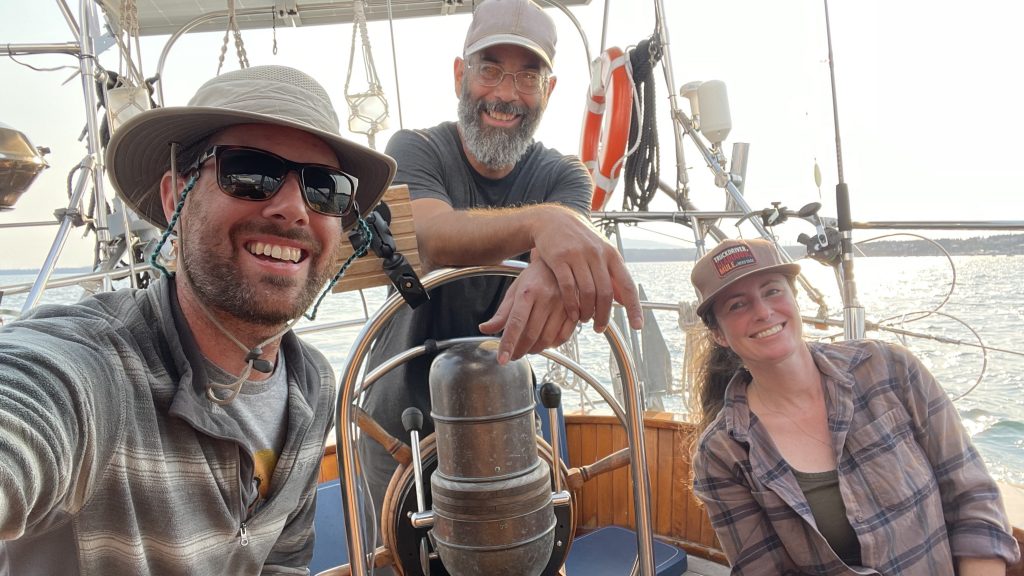 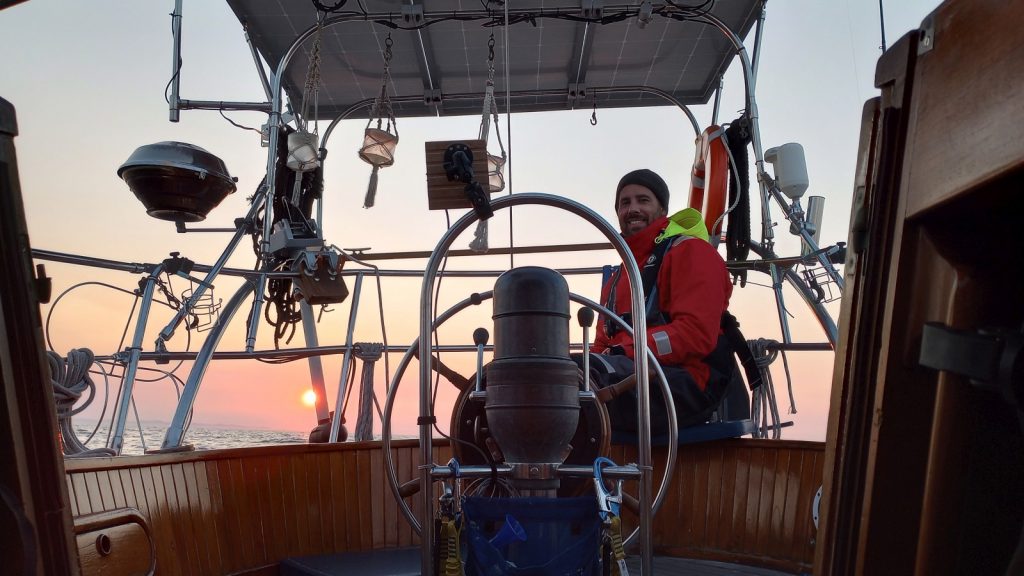 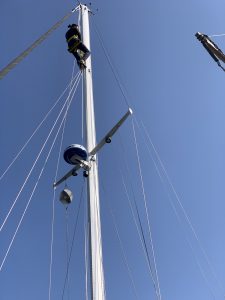 In the hours before pulling into Neah Bay after the sunrise, Meriwether was sent off by a crowd – literally dozens – of humpback whales in the Strait. Cameron and I spent an hour watching them feeding all around us, while Kerri slept after her overnight watch. In the four years we have spent up in the Puget Sound and Alaska, we have seen our fair share of whales, but this was the most at one time, by far… not that we have any photos to prove it.

We would stop in Neah Bay, awaiting a weather window to make the “big left turn”, out into the Pacific and towards California. Two days we hung out on the boat, getting a few last minute jobs done and watching the weather systems in the forecast. Something on the todo list all year was to go up the mast to double check all the fittings. Luckily we had a young, new sailor with us, just itching to do all these things. Cameron was sent up his first mast, where he looked over everything up there to ensure we had no glaring issues. 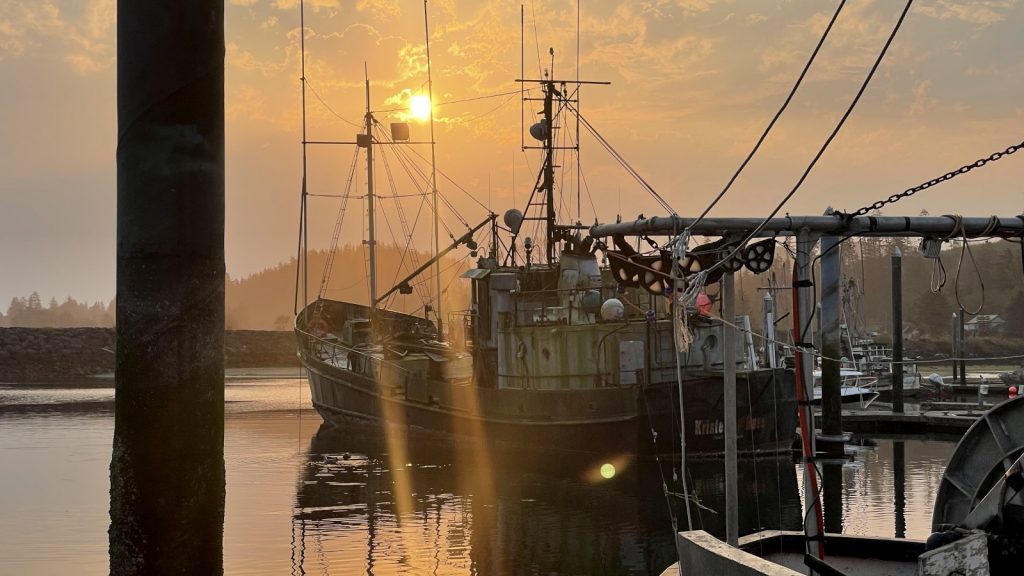 The weather wasn’t really great. We had a big storm coming at the SF Bay Area from the south, and nothing in the next week of forecasting that looked promising to carry us down the coast line. If we could make it to SF by Friday morning, we could get in to the bay before the bulk of the storm, but with little to no wind forecast to push us along, we just kept our options open.

Leaving on Sunday, we motored out into the Pacific Ocean. Not the most exciting way to travel, but we were making ground. We knew the wind would not really fill in until Tuesday or Wednesday, but hoped that as we got 50+ miles out away from land that it would fill in a bit. It did not. Not much anyway. Just a few hours of sailing here and there, but the first two days were spent mostly on the motor. The artificial schedule of trying to beat that storm pushed us into more and more motoring. The Perkins ran for 27 consecutive hours on one occasion. It made the watches quite easy, but boredom was rampant. 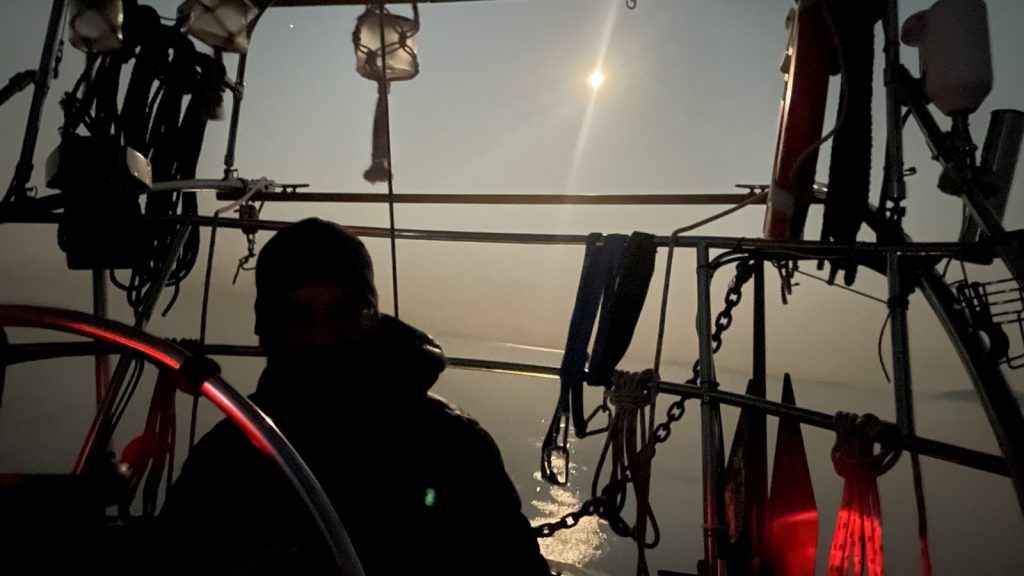 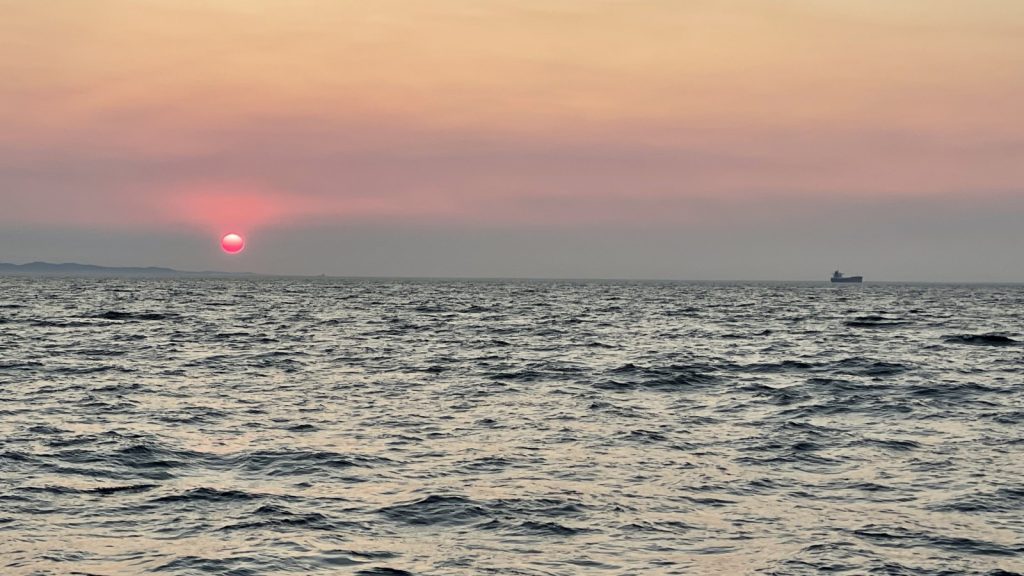 Eventually, and with great joy, we were able to raise the sails and turn the motor off. It was at this time that the automatic bilge pump was triggered. Excitedly I screamed out , “We are taking on water!” as I knew it was Cameron’s first time. Kerri and I are old hands at this already.

A few floorboards raise and it was confirmed, we were taking on water – 80 miles offshore. The pump quickly resolved the issue, but it triggered again not that much further along. We confirmed no hoses or tanks were leaking, leaving only the stuffing box (the hole that the prop shaft goes out of the boat) as the culprit. This too was confirmed as dripping way too quickly, eventually adding a few gallons of water to our bilge, activating the automatic pump. Not the greatest concern, and nothing to be done about it while at sea. We continued our sail with periodic bilge checks.

Not a great deal really happens out at sea. The boat sails itself for the most part. The wind is pretty consistent for the most part. We just sat in the cockpit and read a book or chatted if we felt like it, usually eating dinner together, all three of us, each night before the sun set. Then one or two of us would reef down the sails and settle into our night shifts. The ocean is big – make that BIG – but surprisingly we come across other boats, or more whales, and even a pod of dolphins here and there. But mostly, it is just water… lots and lots of water. 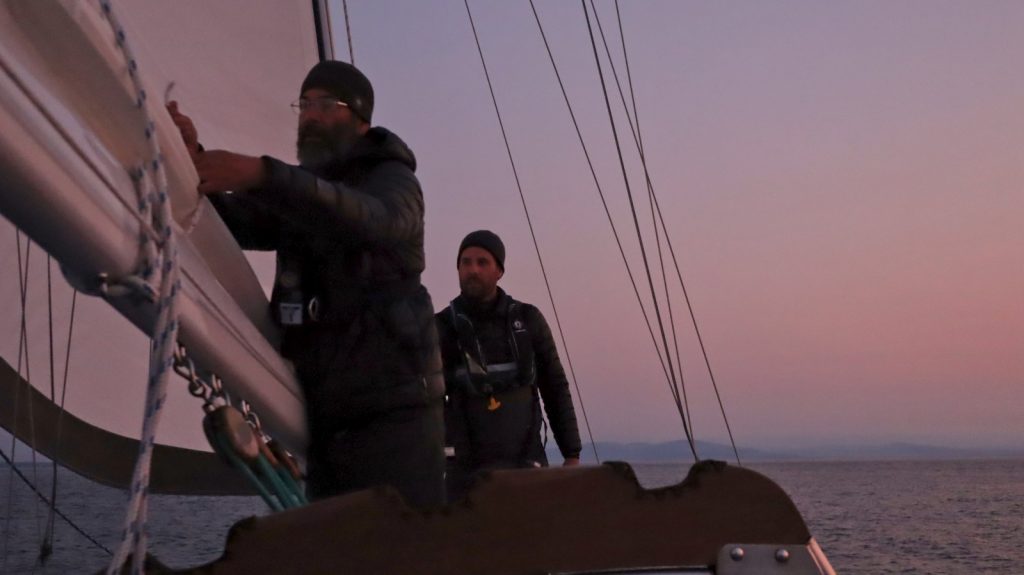 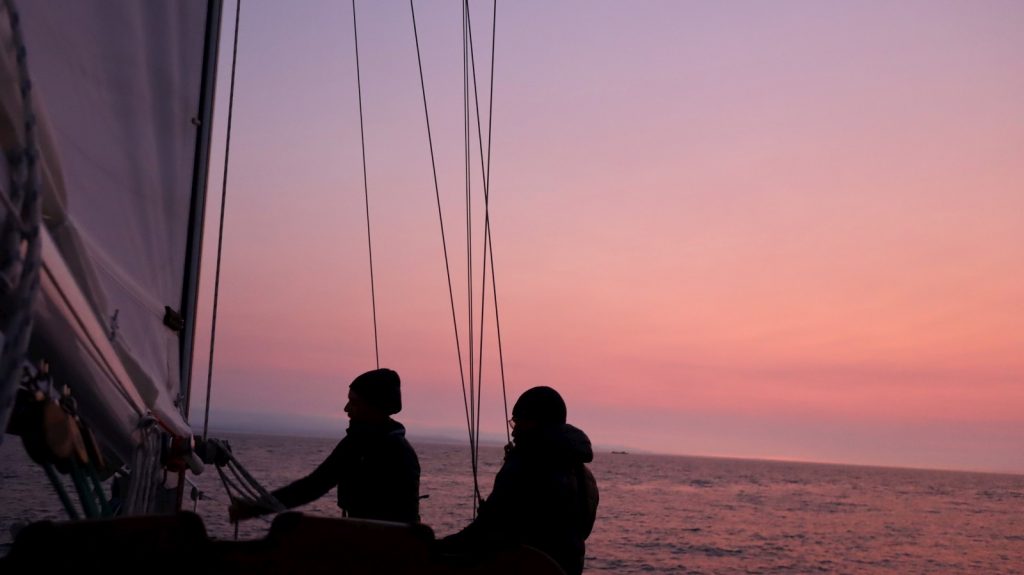 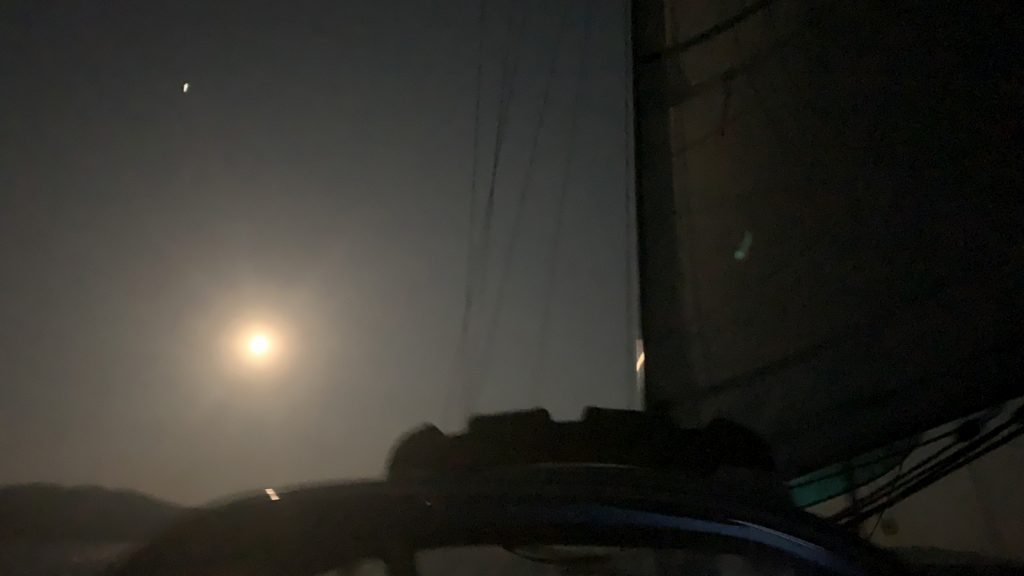 Cameron learned all the systems on the boat: how to reef, and shake out a reef, the auto pilot, as well as all the other lines and blocks required to move Meriwether through the water. The nights came and went, with each of us taking 4 hour shifts with some overlap to enjoy some company from time to time. A full moon kept us well lit though most of each night, making life even easier on watch. After a few days had passed we knew we would not make it in front of the storm – which, by the way, was being reported as a typhoon by some new outlets. Californian’s do consider a small rain shower as a 100 year flood, so “typhoon” may have been a bit strong for the real world. Still, 40+ knot winds, in our face, are not our cup of tea.

Said typhoon was on a collision course with the slowly sinking Meriwether and her crew, and none of us cared to ride it out at sea, which was an option we had on the table. Being smart sailors, we instead chose to turn the nose of the boat gently to the east, putting us on course to make a stop in Crescent City, California where we could wait out the seriously mean looking wind forecast as well as refill on diesel, since we used so much those first few days. 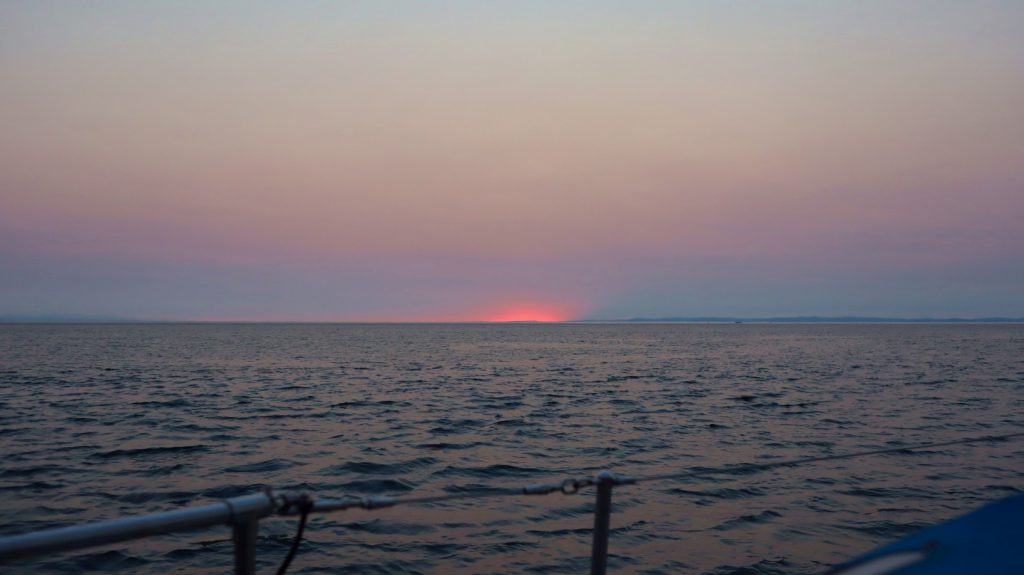 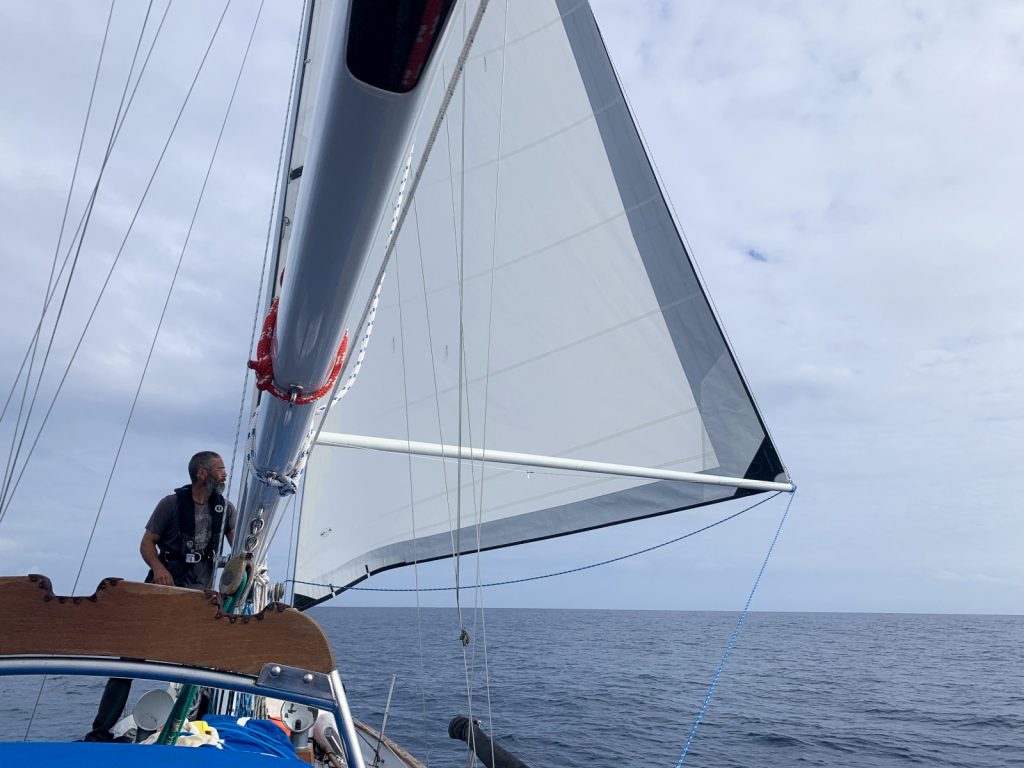 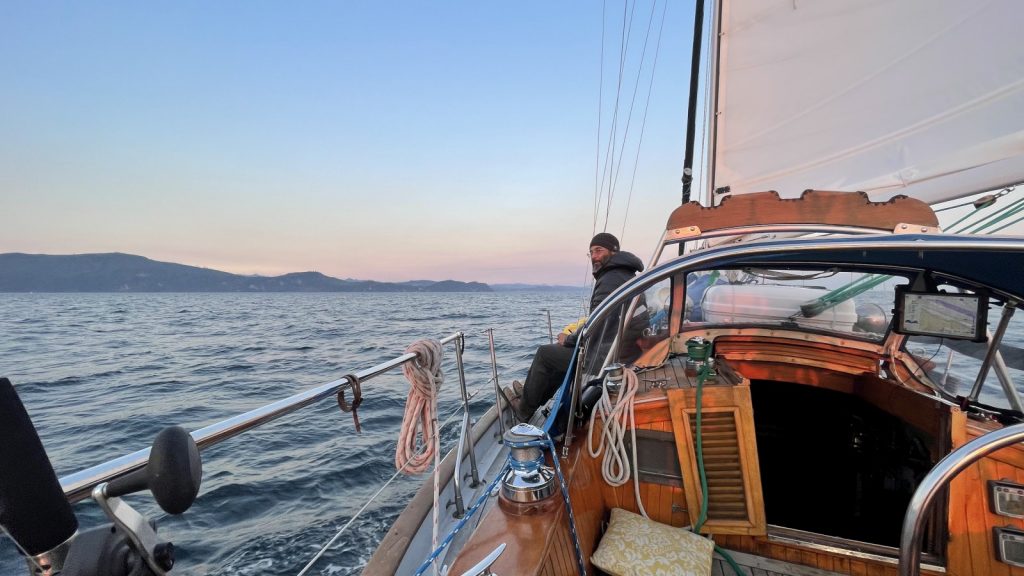 We arrived in Crescent City, tired and stinky, after four days at sea which is an enormous amount of experience for the new sailor and the longest single stretch that Kerri and I have taken as well. While we had hoped to have gotten more sailing in during the trip, we at least got to a point of no return to the Pacific North West. Nothing could bring me to sail north again… nothing.

Juan de Fuca has handed us our asses in the past, so we were ecstatic that he decided to give us a break this time around, on our first leg of the Big Left Turn. We chose to leave in the evening and do an overnight passage, timing to begin on an ebb, with only a tiny short neap flood to resist us between another good ebb. With wind with us and the tide, under a Harvest Moon, we got to sail 2/3 of it, all in comfortable waters. The wind picked up just as we were lowering the sails.

In the morning, before we arrived in Neah Bay to await the next weather window out to the Pacific, we were surrounded by dozens of humpbacks. It was naturally during my shift to sleep, so I only got a glimpse of them for the few seconds I gathered up the energy to poke my head up, but I could hear them slapping from down below.

If you’re interested in following the rest of the trip offshore, with maybe some brief text updates here and there (no internet out there, only our Iridium satellite), here’s our PredictWind link: https://forecast.predictwind.com/…/display/SV_Meriwether. We’ll probably be here for one more night awaiting weather. The forecast is looking better as each day passes. There are several other boats here with the same plan, and it’s always confirming to all of us that everyone else is reading the forecast and making “plans” the same way.

Oh, and if you haven’t heard yet who the other dude on the boat is, that’s @otgcamper, Tim’s nephew, and also a fellow full-time RVer. We’re grateful to have him crewing with us to San Francisco. – Kerri