Sailing down the west coast, pt 2

Our stop in Crescent City took three days, where we restocked some groceries, did some laundry, and had a nice visit with Kerri’s Aunt for an afternoon. We only hung around that long to wait out that big weather system sitting just outside the San Francisco Bay. No need for us to go barreling directly into it, so wait we did. Eventually though, the weather turned to our favor and we planned an exit out of the marina. But first, fuel. Gallons and gallons of it. We had used up all but 15 gallons of our diesel, and with our luck we thought it would be good to have a full tank before taking off to finish the second half of this passage.

Back to it, we settled in for another three-plus-day passage. This time we knew we would have a fair bit more sailing – or so said the forecast – and no real risk of a huge system beating us up. We didn’t bother to sail too far off shore this time, maybe 30 miles. All went smoothly over the three nights. With Cameron onboard as crew, sleeping 8 hours a day was no problem. Our schedule even allowed for a lot of overlap between watches, so no one person was left alone for long lengths. 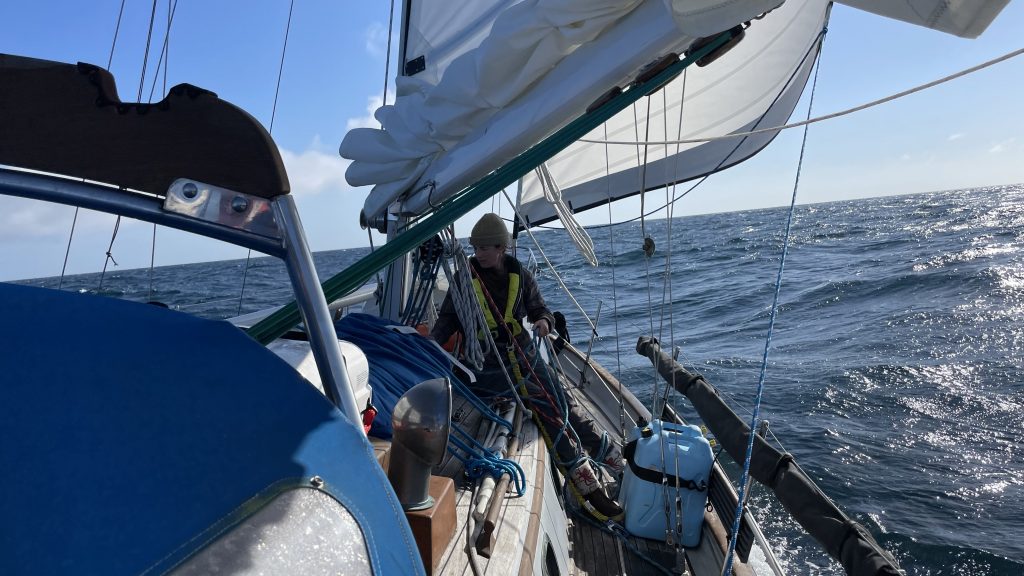 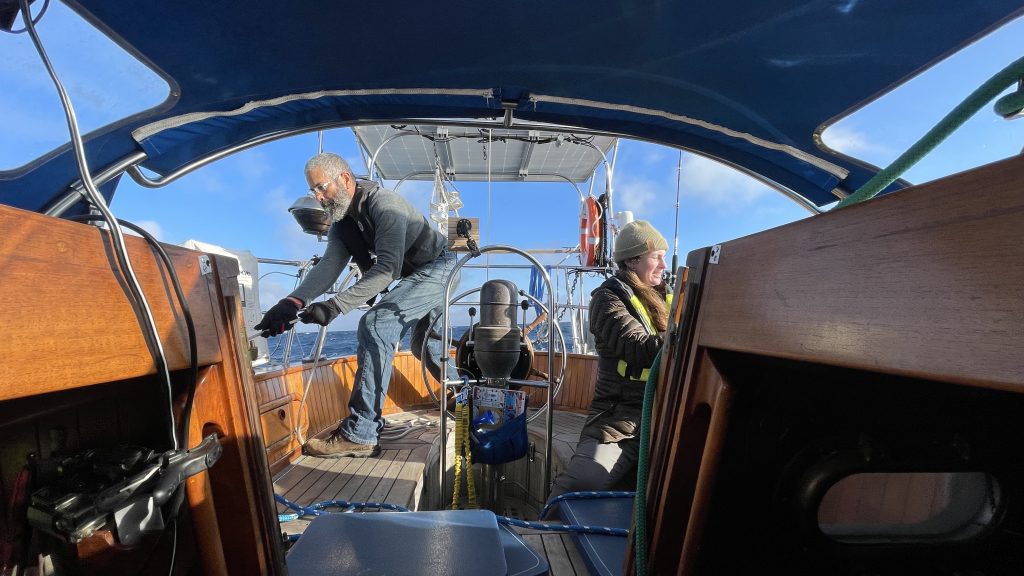 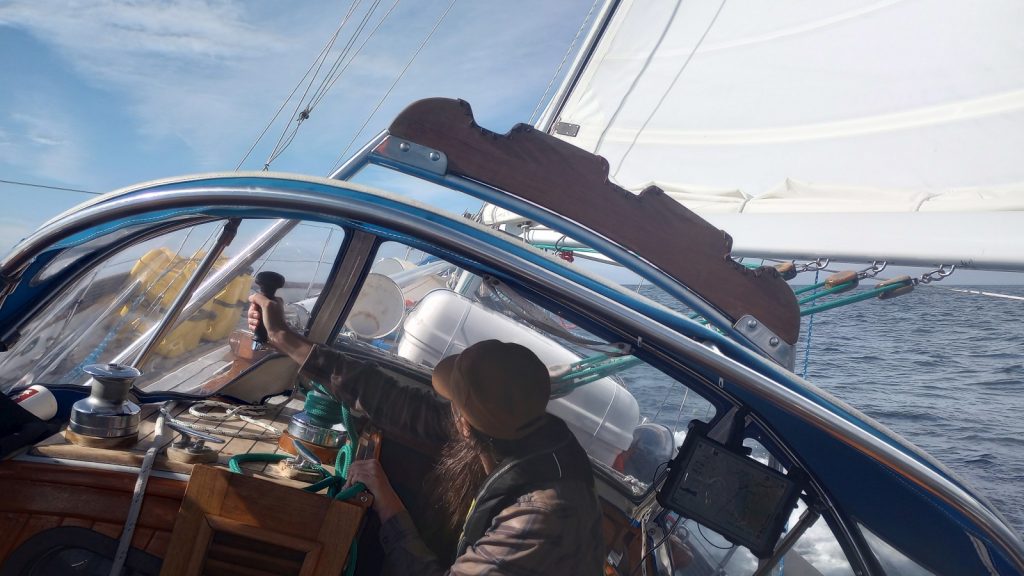 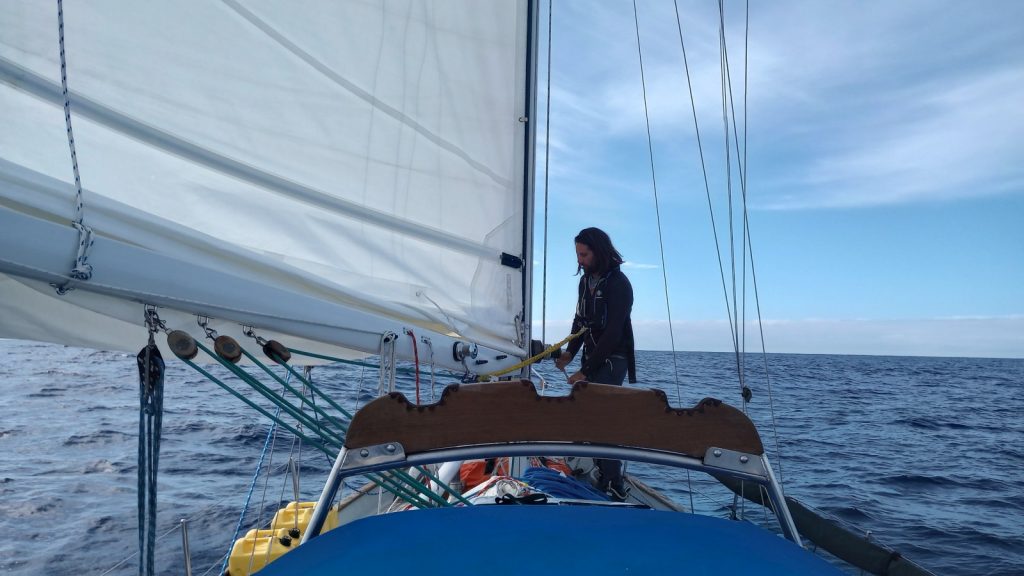 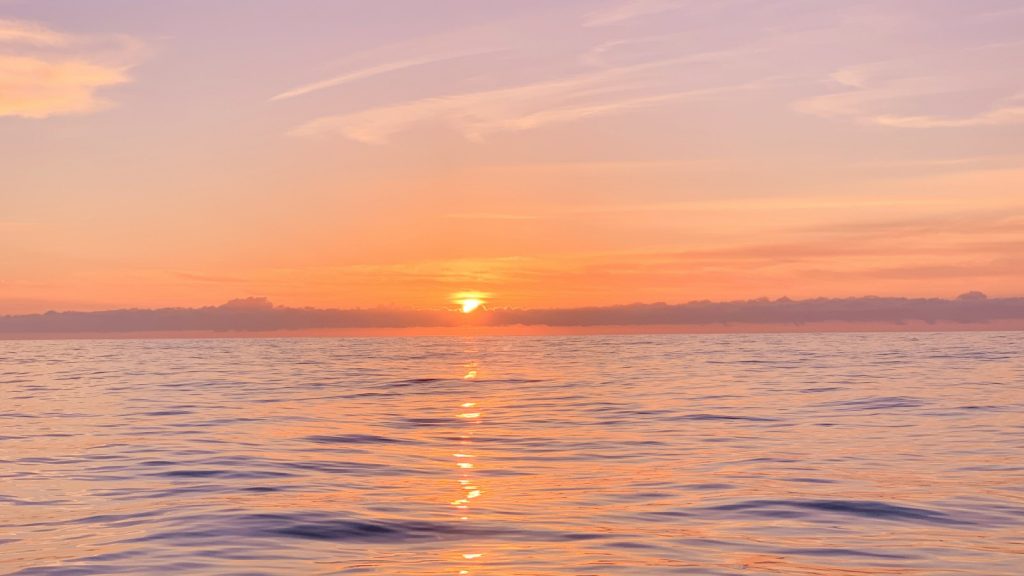 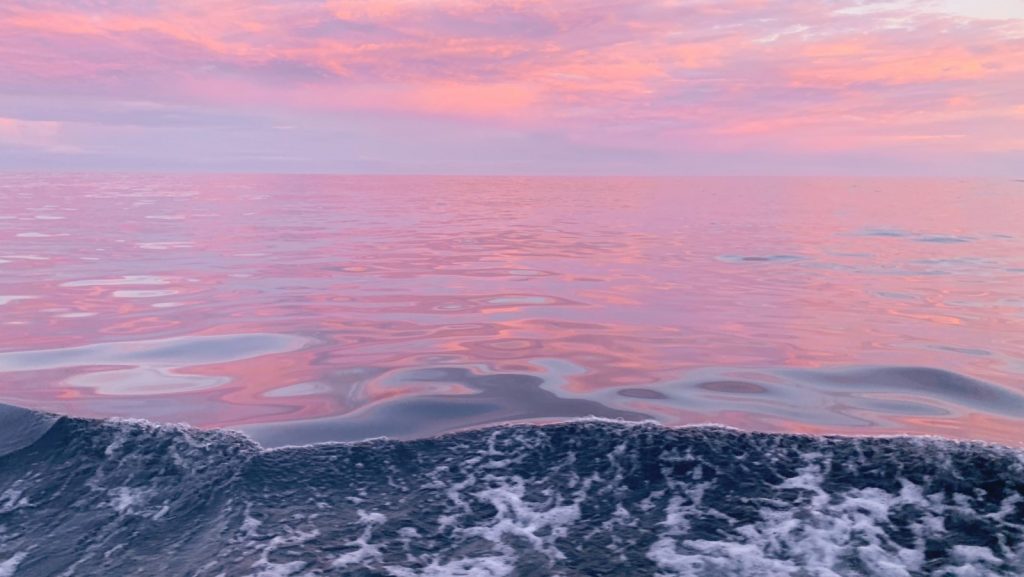 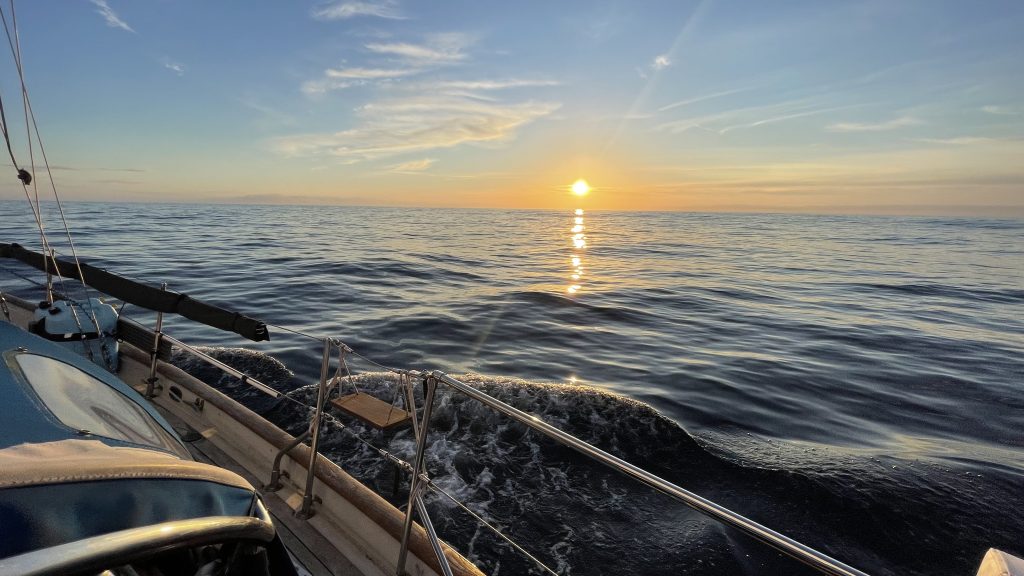 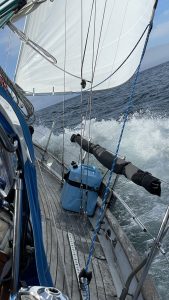 The sailing was pleasant enough, almost always down-wind. The only real concern was rounding the infamous Cape Mendocino, with it’s notorious rough waters and weather. What is a nice sail at the start of the day could be a brain shaker around Mendocino. But, once again, we chose our weather window to be on the calm side. In fact, it was so light when we arrived at the Cape, we were motoring past.

Our third morning we were blessed with one bucket-list of a show. Dozens of whales were bubble-feeding the same area we were sailing through. This meant every few minutes we would get to see multiple whales break out of the water with their beaks. To add some sugar on top, we got to see multiple full-whale-breaches as well. And, the sprinkles on top where the dolphins and seals that came to bow-ride Meriwether too! It was just crazy, and amazing, and awesome. You couldn’t ask for a better scene.

We sailed the rest of the way to an impromptu overnight stop off Point Reyes; Drake’s Bay to be exact. We were going to arrive at the Golden Gate Bridge after sun down, which none of us wanted. I had full expectations that the northly wind would be blocked by the land as we rounded the tip of Point Reyes, but it somehow actually picked up. By the time we made it into Drake’s, we had 30 knots on our nose. It was truly howling. At least the sea state was mild, as the short distance to land ahead wouldn’t allow for much chop buildup. We dropped anchor and relaxed the evening away until our VHF radio called out our name. 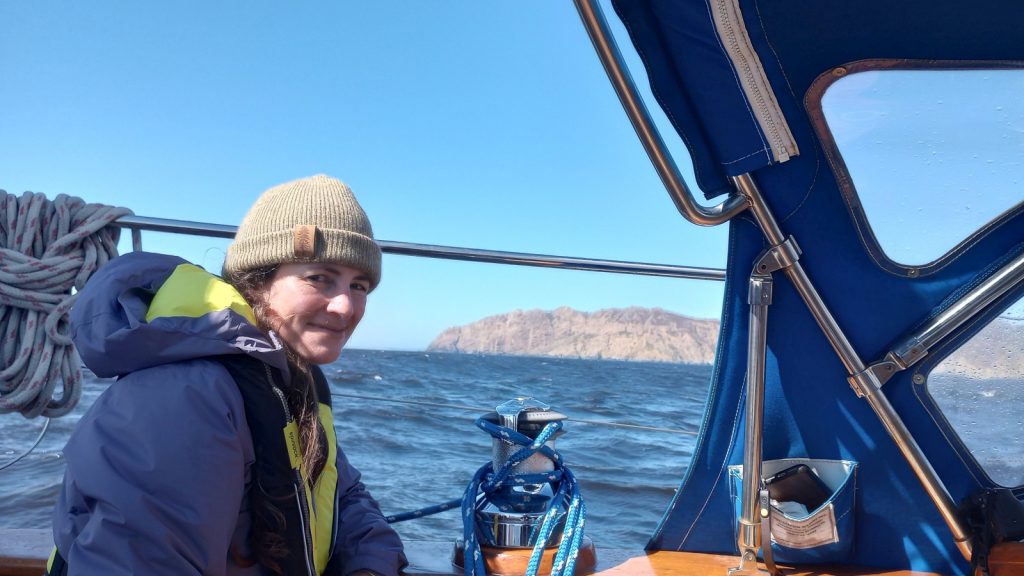 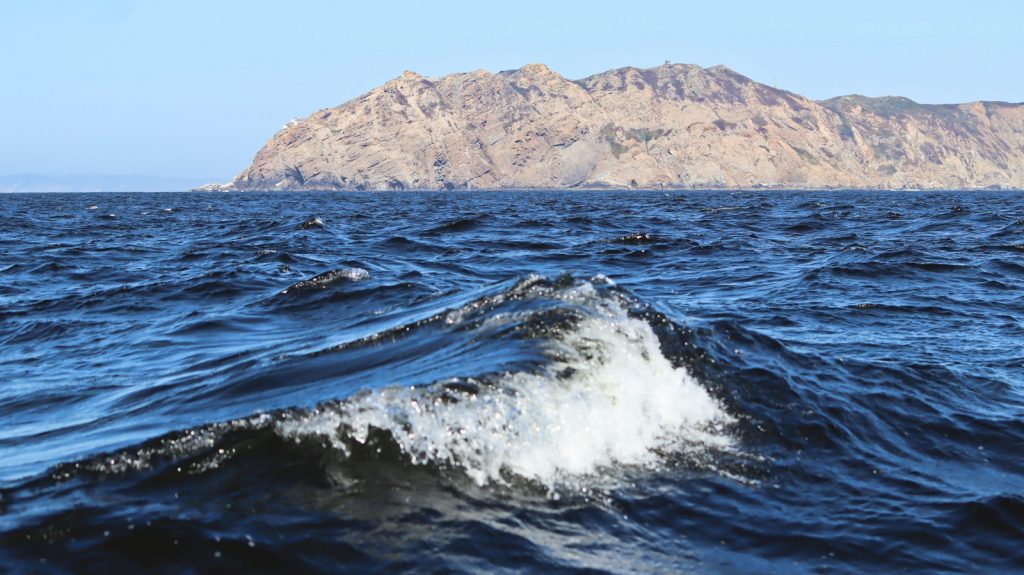 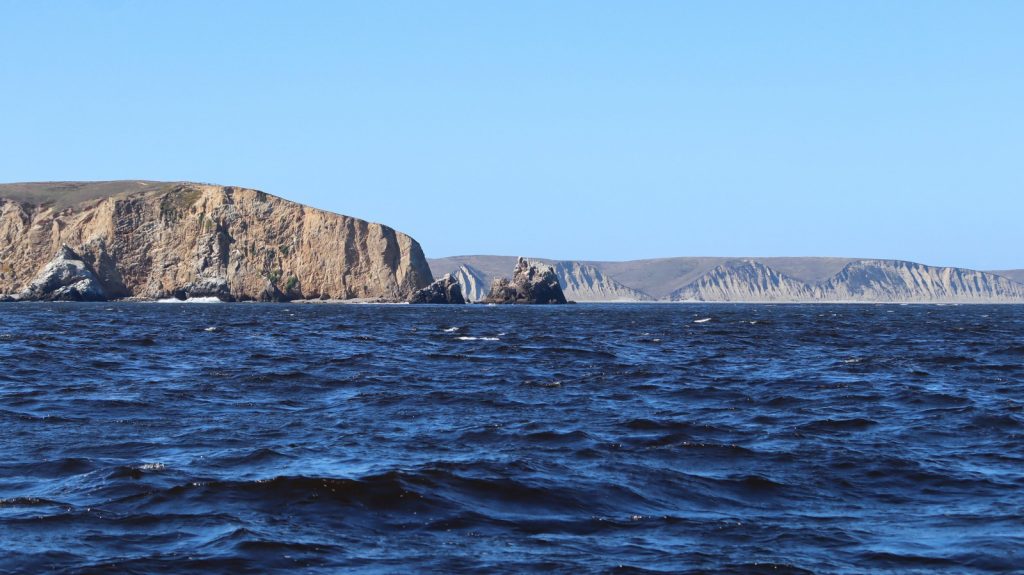 It was our neighbor boat, which pulled in a few hours after us, asking for fuel. They had been following us down the coast ever since Washington and had to deal with the days of motoring as well. A poor choice of not fueling in Crescent City made them quite slim on fuel to make the rest of the distance into San Francisco. We, of course, had plenty and provided them with two jerry cans worth. It is nice to pay it forward after being helped by a fellow boater back in Alaska.

Morning came, and we hauled up our anchor for the last 25 mile leg into SF. Only issue was, we had stowaways. Thanks to the cattle up on land, hundreds of small black flies had boarded Meriwether. To make matters worse, they had no where to go. We could scare a batch off, only to see them return. Nothing was nearby enough for them to escape the boat. Wen we set sail, we all but ensured every single one of them came with us and would stay with us. So bothered by this hoard, Cameron and I got to swatting. For 90 minutes we swatted, killing hundreds between us, finally reducing the number to a manageable few dozen. My arm hurt for days afterwards. Apparently, the human arm is not very happy with repeated swatting. 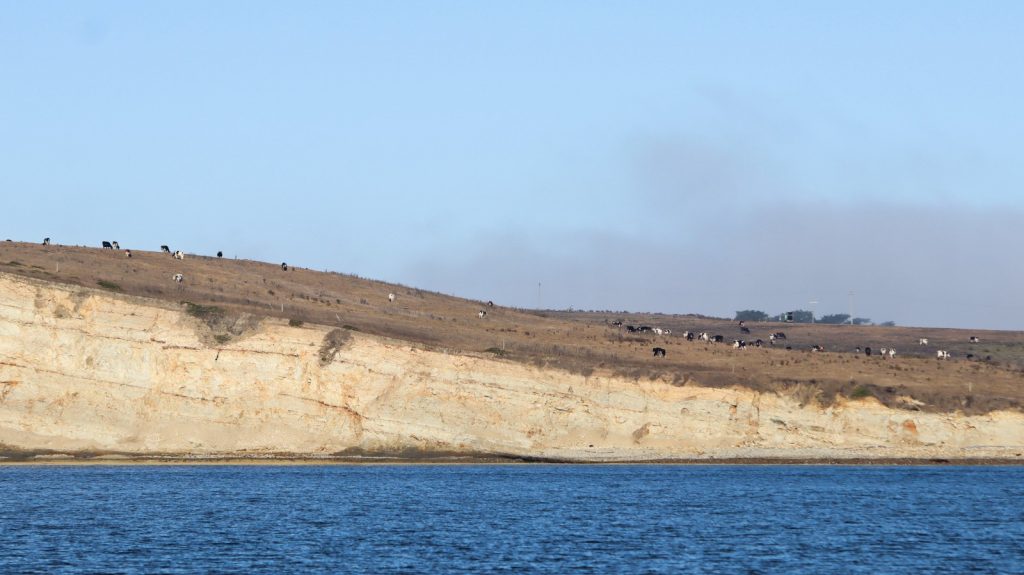 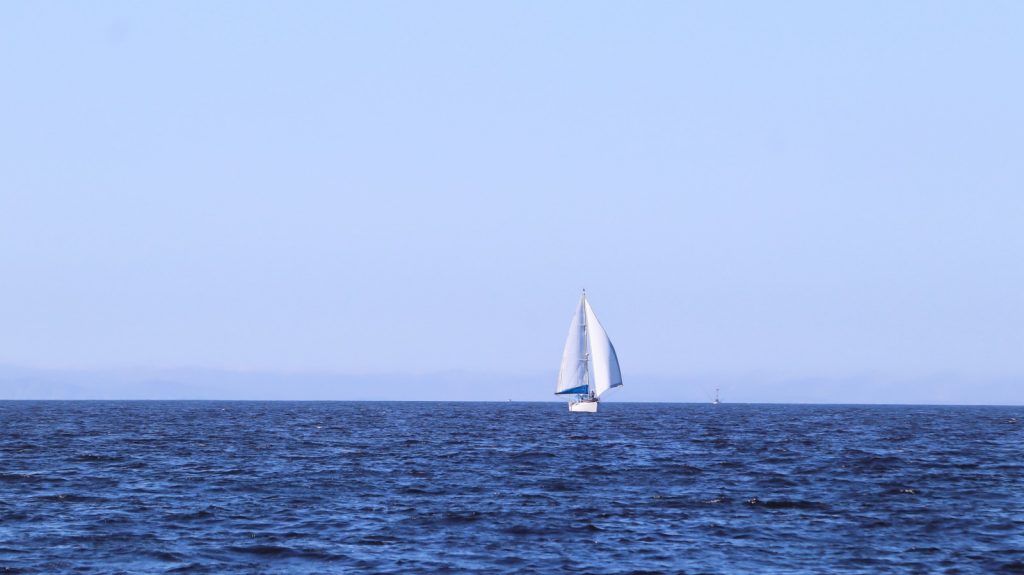 A few hours later and we were getting our first glimpses of the Golden Gate. Boat traffic began to get heavier, and by the time we turned to pas sunder the iconic bridge, we were only one of a dozen sail boats doing the same. Many were tour boats promising passengers a sail under the bridge. A few were locals doing the same. Then there was us (and our Drake’s Bay neighbors) trying to enter the Bay as well. As it turned out, the rules of the road never fell in our favor and we were forced into an odd approach into the entrance of the Bay. A bit of hand steering while going dead-down-wind was then required to get us under the big bridge, where the wind was picking up the closer we got. By the time we were under it, we had 25 knots of wind at our back, with just a single sail up. We were moving right along, but right into a large crowd of kite surfers. Cameron is a kite surfer, so his enjoyment level watching these guys swirl around our boat as we passed by was thick.  Hoots an hollers came from the crewmember as he watched the surfers fly past our bow. What a way to end an adventure! 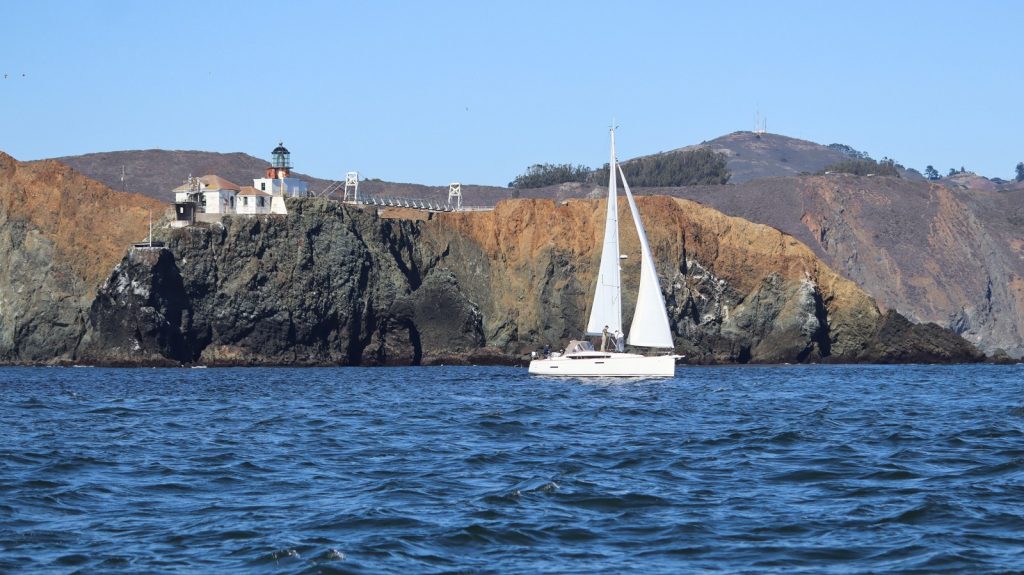 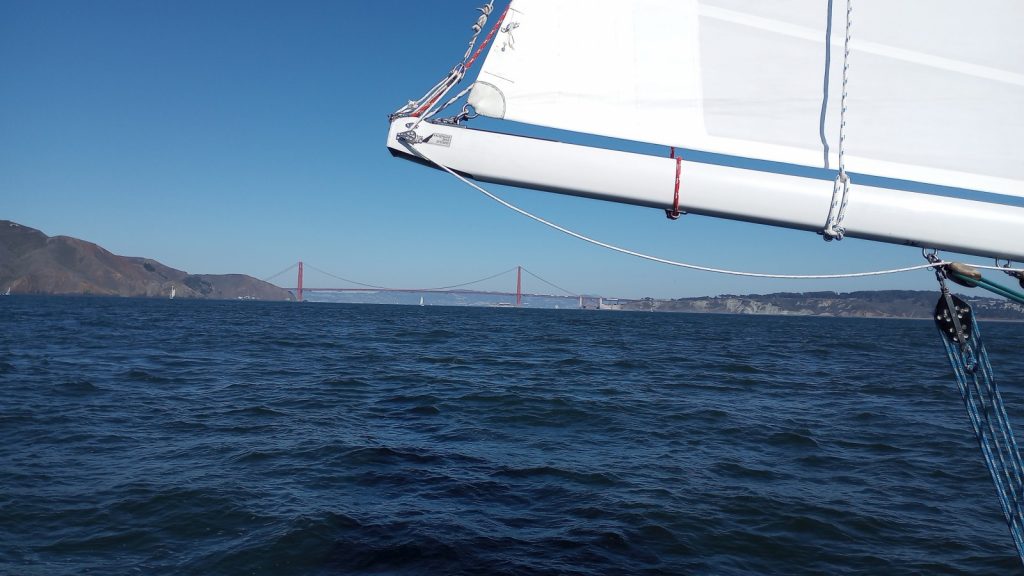 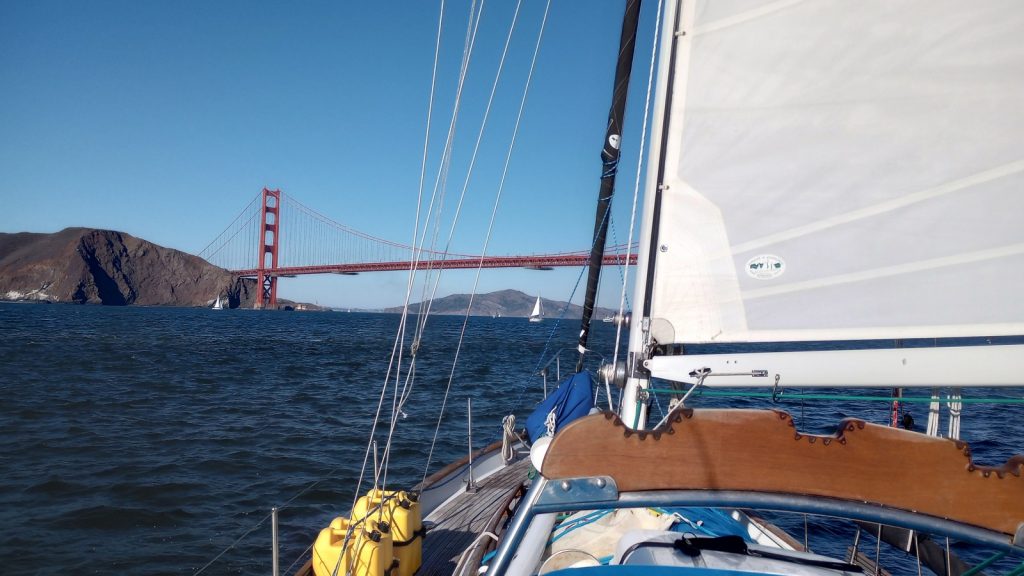 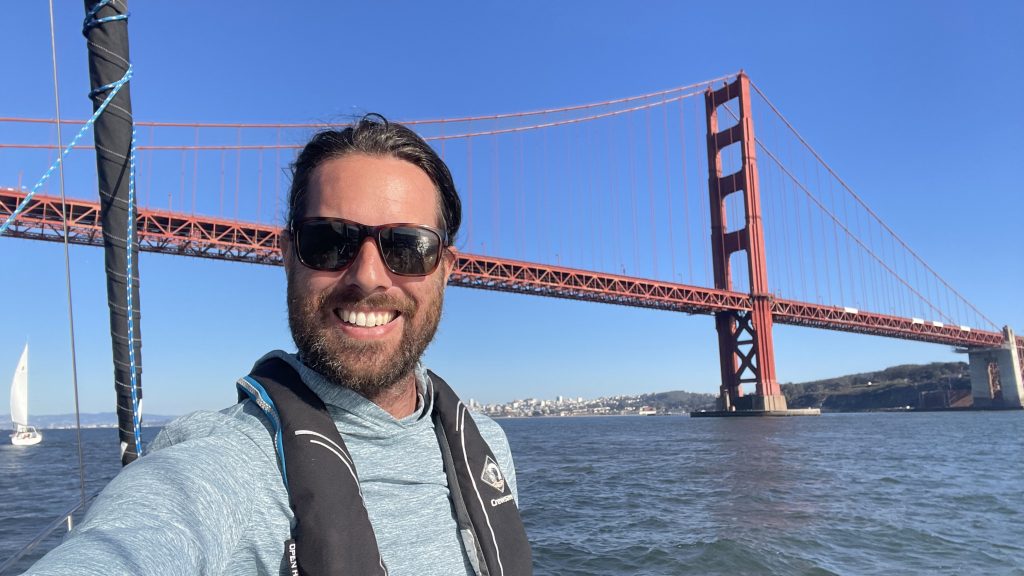 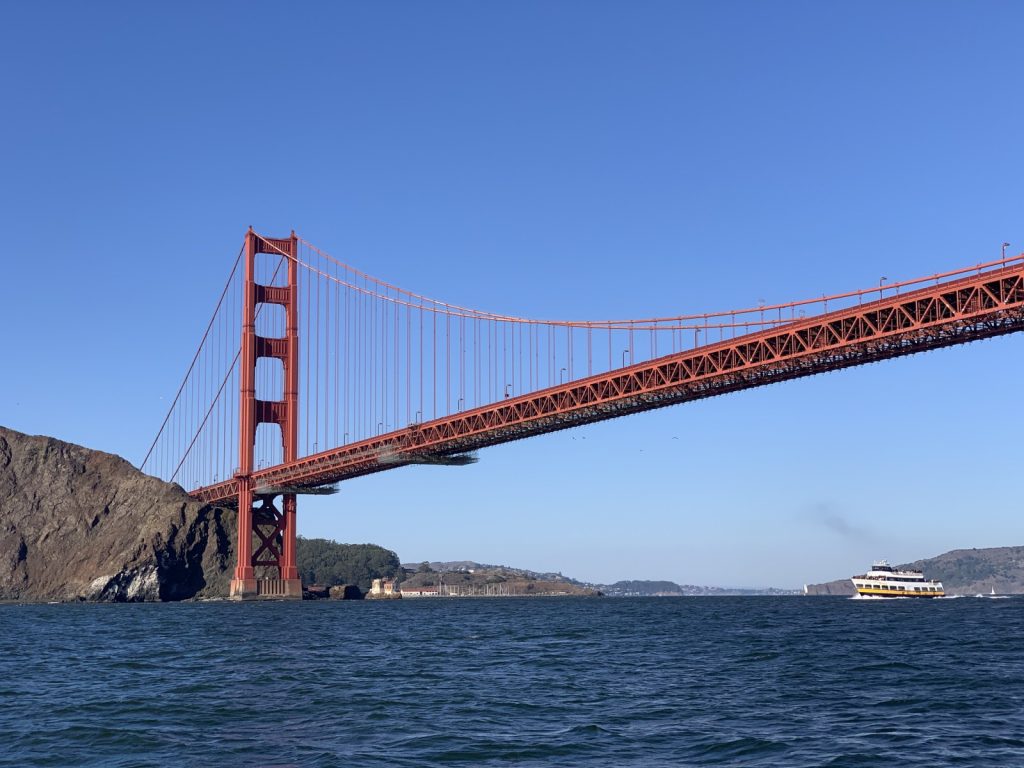 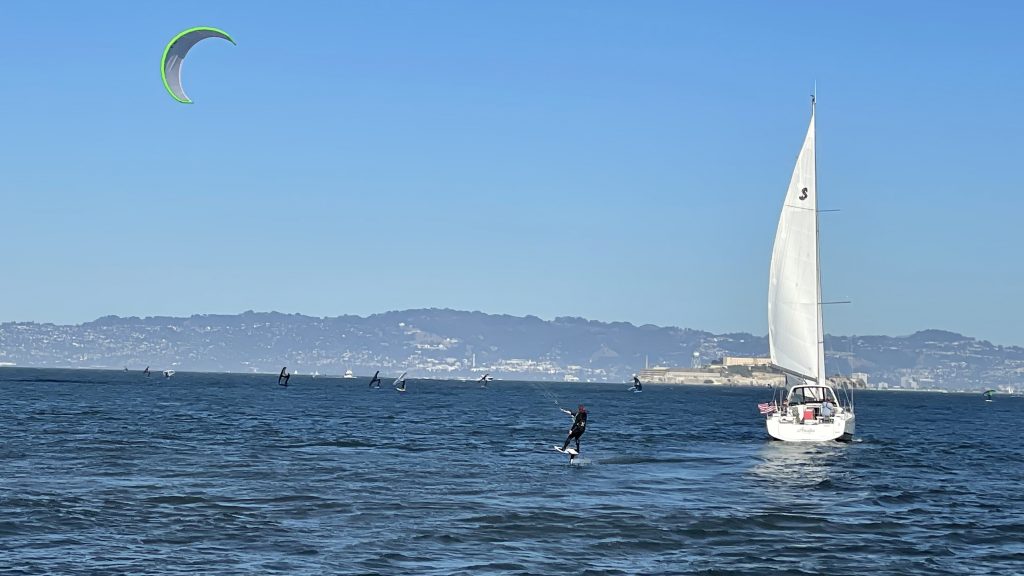 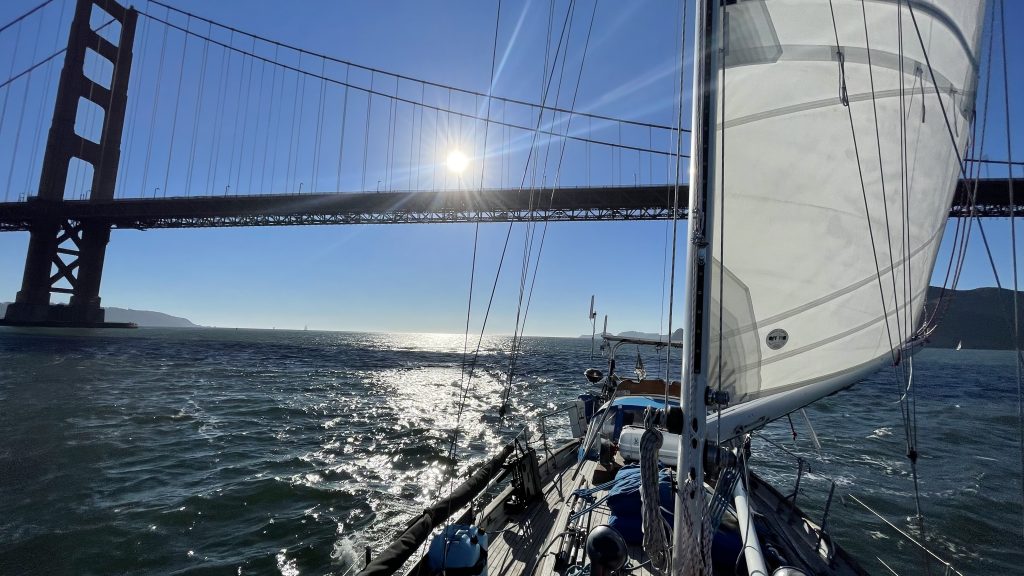 Soon we had arrive to our anchoring spot, just under the San Fran skyline, in Aquatic Park. We were all beat, after another 3+ days at sea, and ready to just call it a day… at least I was. Kerri and Cameron took off to bring back a much needed dose of In-N-Out, then we invited our neighbors from Drake’s over for some cocktails and to share our stories from each of our different-yet-the-same west coast passages. Good times. Good times. 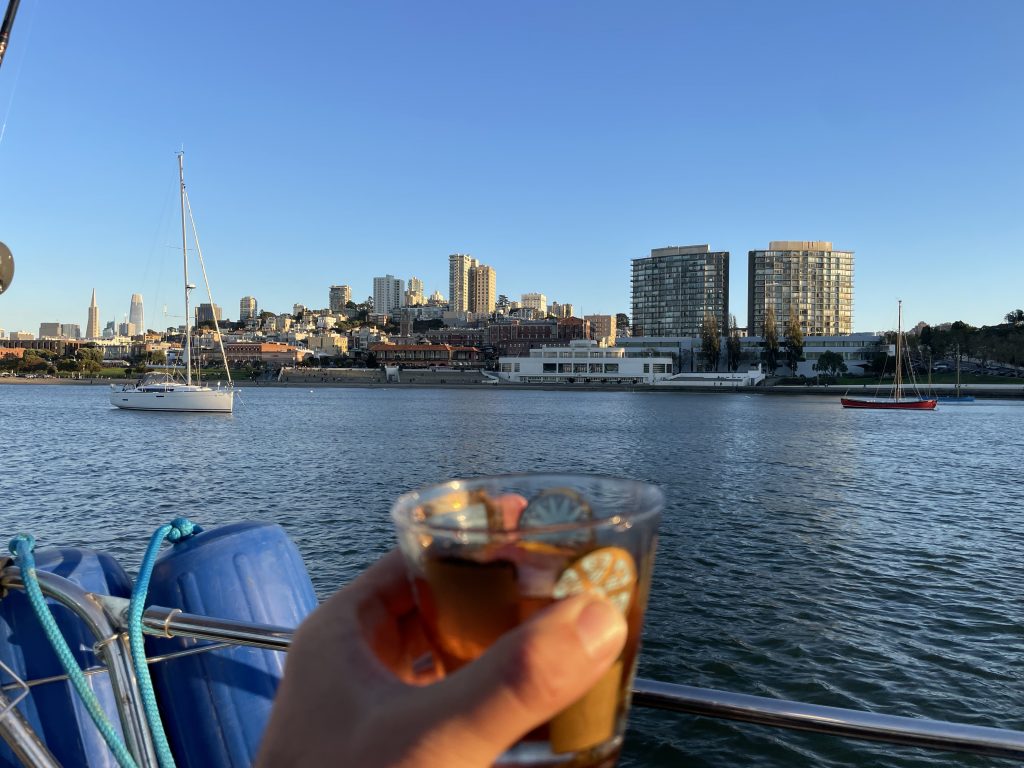 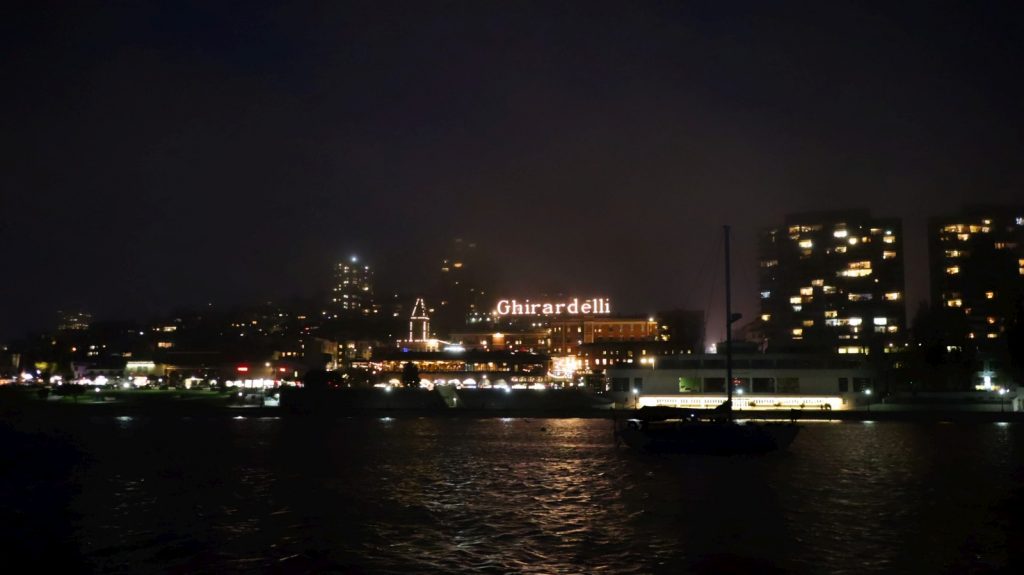