Port Townsend for the last time

We were under no delusion that we would get to raise a sail on the day we crossed back into the United States. From Victoria to our final destination of Port Townsend was a cool 35 nautical miles, all of which was forecast to have not even the slightest of a breeze. So, Kerri worked down below while I kept watch for the six and a half hour ‘sail’, but for one vital video conference – only after crossing the border mid way across Juan De Fuca – with US Customs to check back into our own country. I have to admit, it was kinda of a neat idea to video conference. They could verify where we were (or were not as is the case) and who we were. It all took only a minute or two, and we were officially back in the USA.

We then made our way to Port Townsend where we anchored off the town and did not leave the boat for two days. We may not have even poked our heads up more than once each day in fact. It was good to sit still for a change, so we took full advantage of not having to move Meriwether and hunkered ourselves down below. Off Port Townsend is not really the best anchorage. It is can have a lot of roll, and there is a fair amount of traffic, but we both enjoyed having our favorite town as our view for a few days. 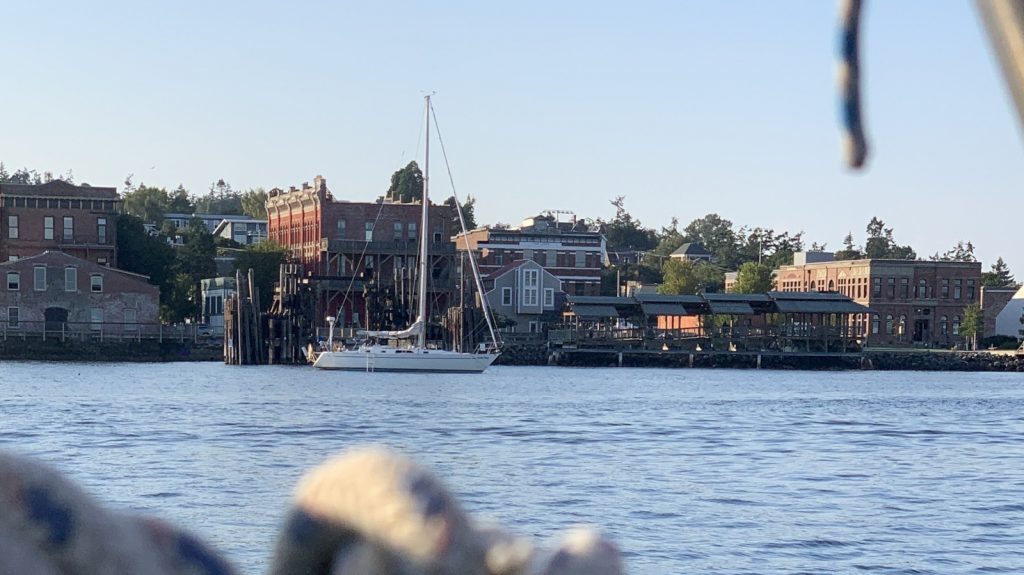 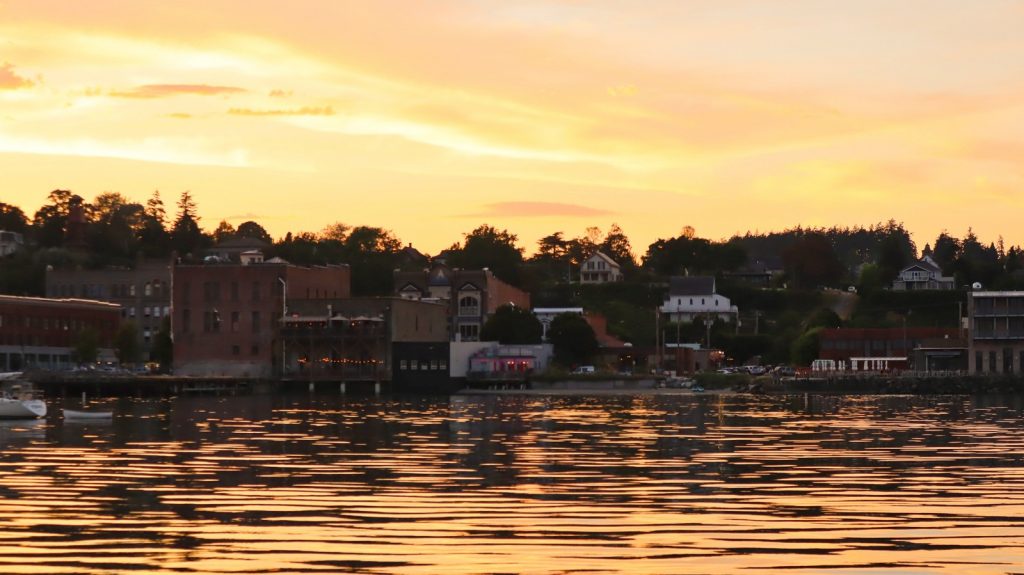 We still had a couple days before our scheduled haul-out so took the opportunity to have my Nephew and his most amazing girl out for a weekend of sailing around the Port Townsend Bay. They have both taken the ASA 101 course, so knew the basics, but had yet to go out on an ocean-crossing-capable boat, such is Meriwether. We tore them off the docks in the late morning on Saturday and spent that afternoon sailing which ever way the wind would take us. We had no destination other then to just enjoy some sailing around. The excitement from the two new sailors, and the fact that we had absolutely no where to go, made it quite fun for Kerri and me too. The new crew were happy to do all the work; hauling up sails, furling, trimming, and steering, all while the salty veterans sat back and smiled at the enthusiasm that had long transformed to daily routine for us. 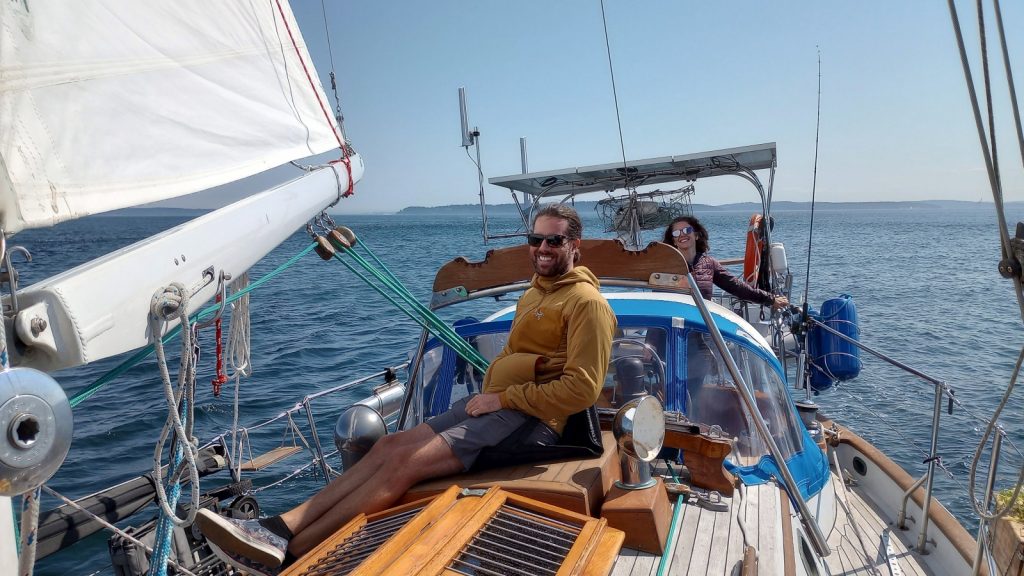 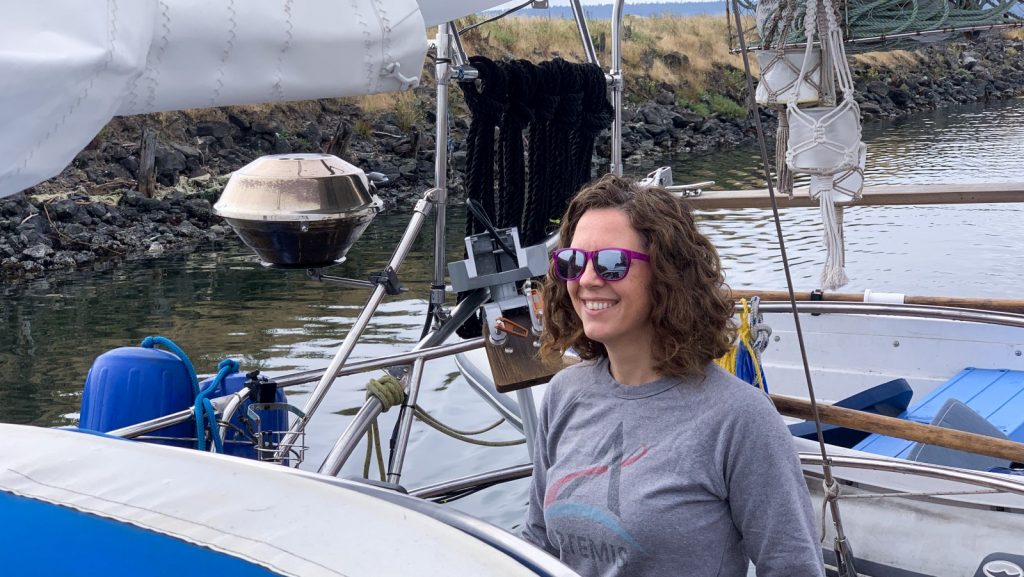 We took a mooring ball (their first, so they watched closely) at the State Park across the way and had a fun filled night of snacks, drinks, and laughter while the sky went dark. It was a late night for us – all of us – staying up late enough to see the train of Starlink satellites streak overhead.

The next day we set out to ride the wind once again. First with the spinnaker (again, their first), then with all three sails out and beating upwind to no real destination. We eventually turned tail (aka jibe) and worked our way right where it all began; right in front of Port Townsend, where we unanimously decided to drop the sails, lash the boat to the nearest open dock, and go have a greasy meal. In the end, the new sailors spent nine hours sailing, racking up some very important experience to add to their log books (ah, I remember the log books). 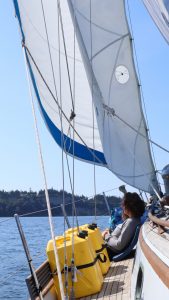 It’s been a busy and fulfilling few days since we arrived back in PT, and this introvert is ready to recharge the batteries (but next up today is a haul out). @otgcamper (Tim’s nephew) and @jacquienfuego drove up from South Sound for and overnight cruise with us. They’ve recently taken some lessons, and we putzed around Port Townsend Bay with the sails up in wind everywhere from 2 knots to 15. It’s a rare experience for us to just sail to sail, not to get somewhere. Between that and watching the experience of being on Meriwether through fresh eyes, we got to be reminded of a lot we take for granted after years on the boat. After they left, I got to visit my favorite local haunt (The In Between) that was closed during our COVID winter there and I suspected would stay closed forever. Caught up with friends, made some new ones. No rest for the weary; the next couple of weeks will be full to the brim with work and life. – Kerri 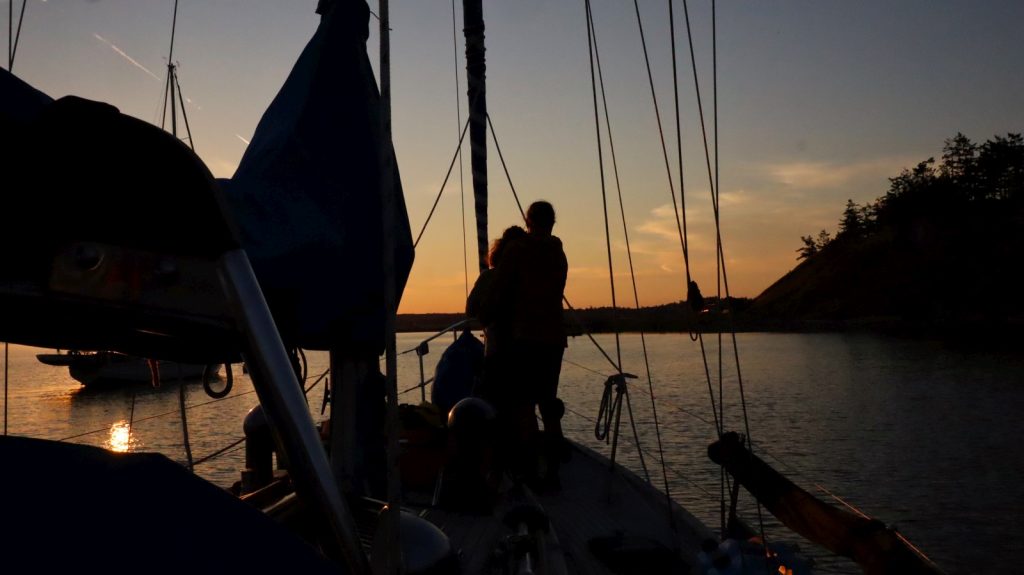 Although it was a blast to have the company, we swiftly kicked the young couple off the boat, sending them on their way back home, and prepared ourselves for the haul-out the following day. To keep a long story short-ish; Meriwether was taken out of the water for a bottom paint and a once over of all systems in preparation of our sail down the West Coast to San Fran. It didn’t take long – literally within minutes of being out of the water – for the to-do list to grow. The Bob-stay chainplate was severely cracked, and a replacement would need to be fabricated. This would add a serious cost and a lot of time to haul-out bill, but we were thankful to have found it when we did. That failure, out in the Pacific Ocean, would have been catastrophic. 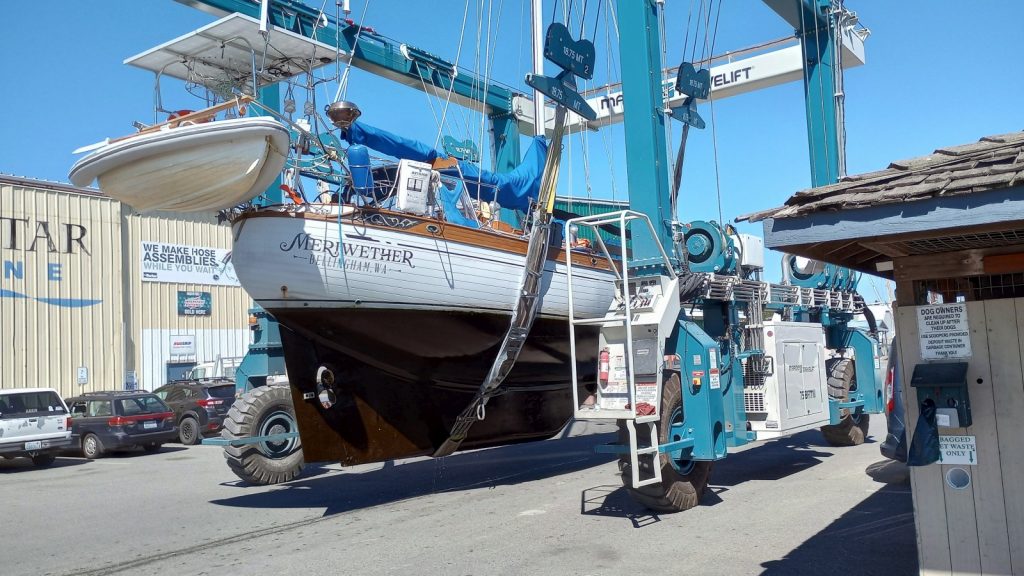 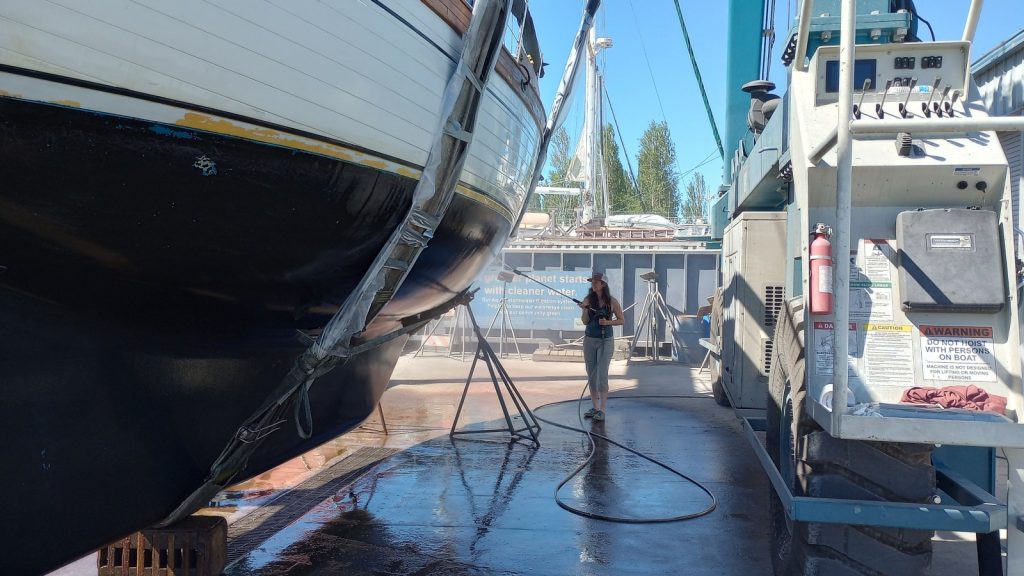 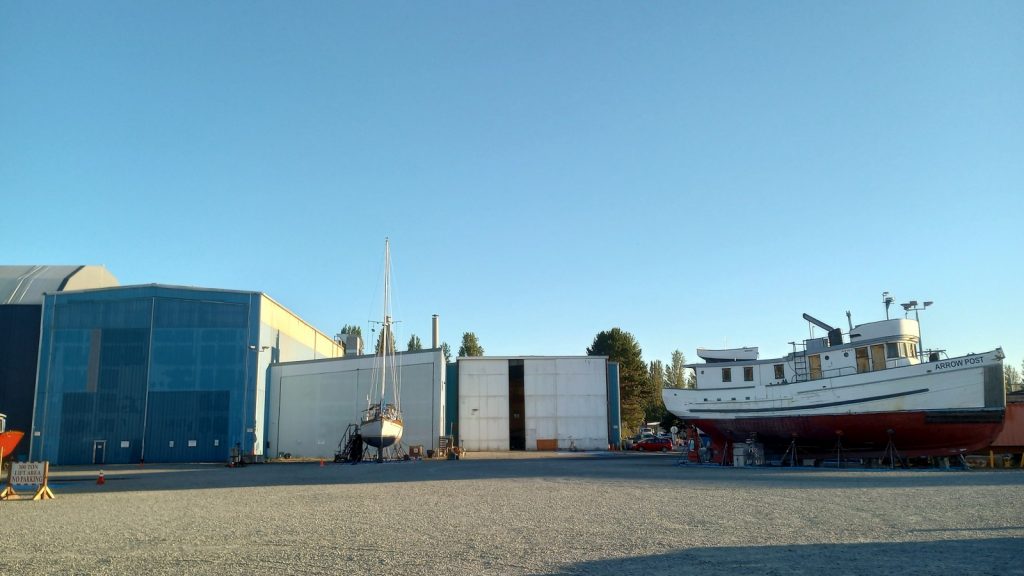 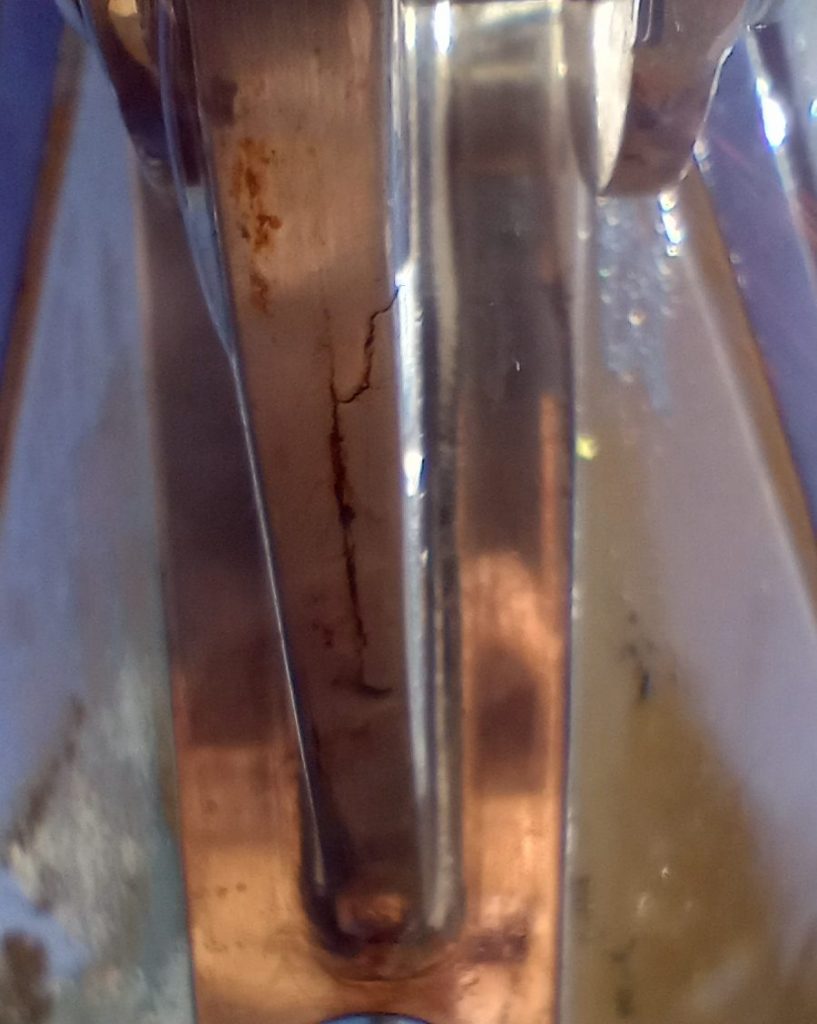 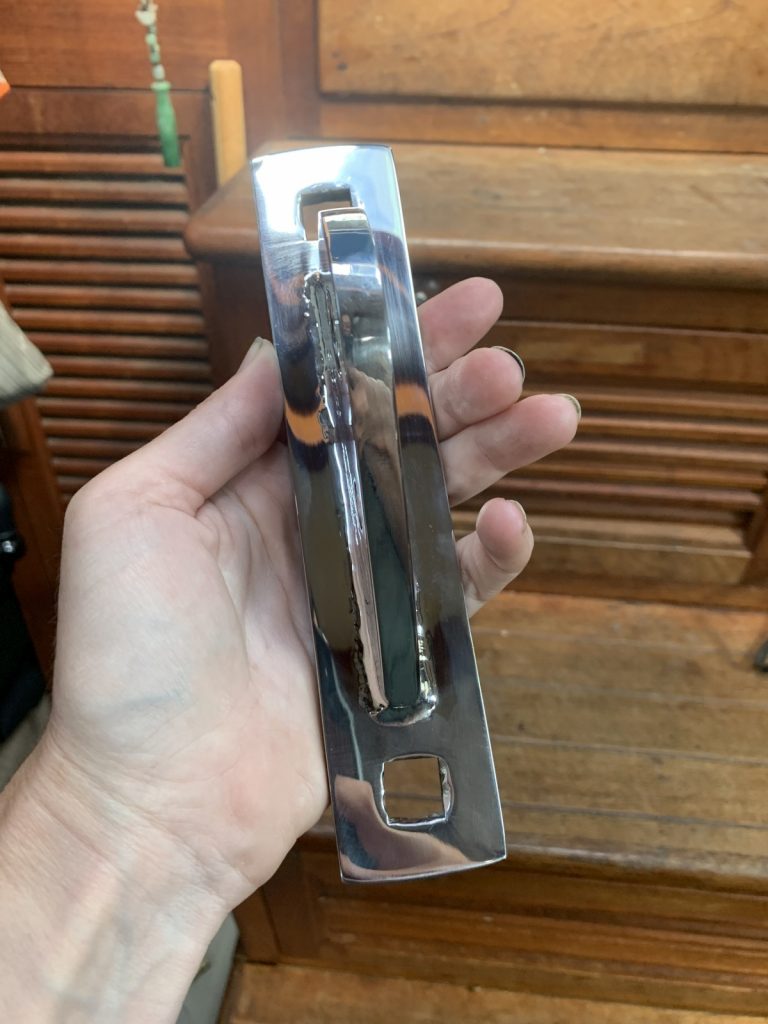 I got the bottom paint out of the way while the Shipyard fabricated our new part. Installing it was easy enough, but removing the old one was not so easy. Two days of hammering, grinding, and bitching is what it took. Once that was completed, I got to removing four more – of eight – chainplates, fabricating and polishing them myself (as the shipyard did not have the free man power to assist) before reinstalling them. While they were not cracked, we are just thinking ahead on replacing these critical parts before heading out into the greater Pacific Ocean. Keeping the old ones as spares is nice peace-of-mind as well. 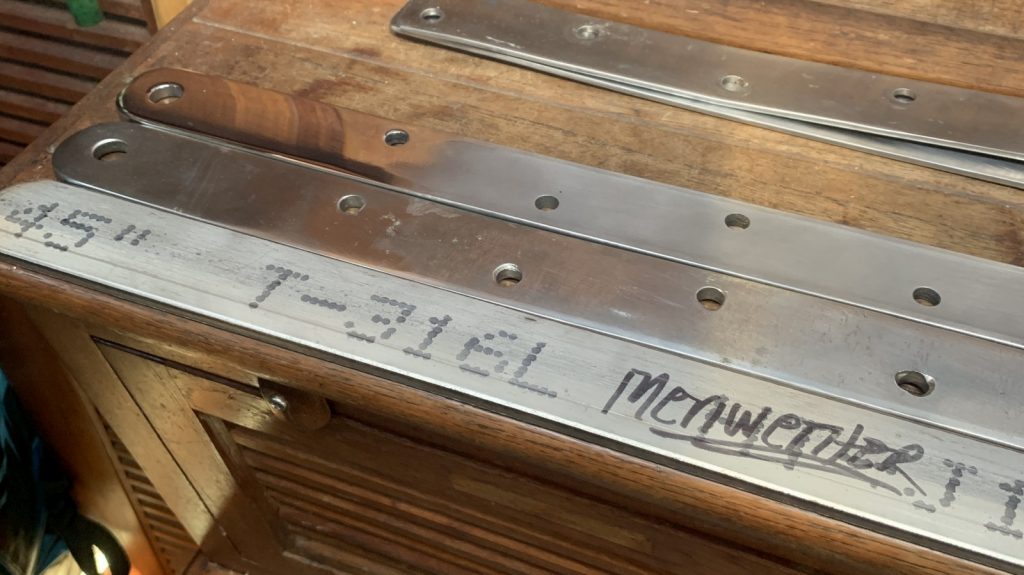 Twelve days after we were hauled out we were being hauled back in. It was only then that our brand new PT Sails headsail could be installed, finally retiring our old and haggard jib. Only now did I have the thought of how we should have named it “old flappy” – I’m really sad that I missed the opportunity to say those two words out loud, at least a few times.

Some other new gear was purchased and installed while we were in PT; a brand new EPIRB, and a new four person Life Raft. If shit hit the fan out there – a hundred miles or more from the nearest human – we now had everything we could get to keep us alive for a while, though we both hope never to have to use either, even though the raft certainly looks like an inviting sea-camping-tent.

1) Bobstay chainplate. Yikes! We check this rather regularly, so were shocked to see the HUGE crack in it when we hauled out! So glad we found it before a big passage! @ptscoop fabricated the replacement, and Tim learned a new skill: stainless polishing. It’s actually more mirror-finished than it appears. The streaks are from me trying to clean it with my dirty shirt.
2) New 110% Genoa from the masterful ladies at @ptsailshasseco to replace our old baggy, ratty 100%. We’re really glad to have booked them early this year, thinking our sail had some more life in it, but wanting to get it done before leaving the PNW. Over this past summer, the old sail totally gave up the ghost and lost all its form. (The before pic makes it look better than it is). We’re slowly moving from blue canvas to slate, one project at a time.
3) Fresh coat of bottom paint and a new bootstripe. We had painted the bootstripe a light blue-grey two years ago, but completely screwed up the application, and it has been peeling off ever since. The power wash during haul-out stripped it practically all the way back down to the original gel-coated yellow. Happy for a do-over anyway. The color I originally chose never really looked right on the boat.
Up next: Tim’s cutting and polishing new chainplates for the priority replacements. I’ve got a ton of business work still to do, and a bunch of meal-planning and prepping for our 3-man passage down the coast to CA. Actually super grateful that the weather delayed our originally planned departure date, but I’m *still* super stressed about getting it all done. – Kerri 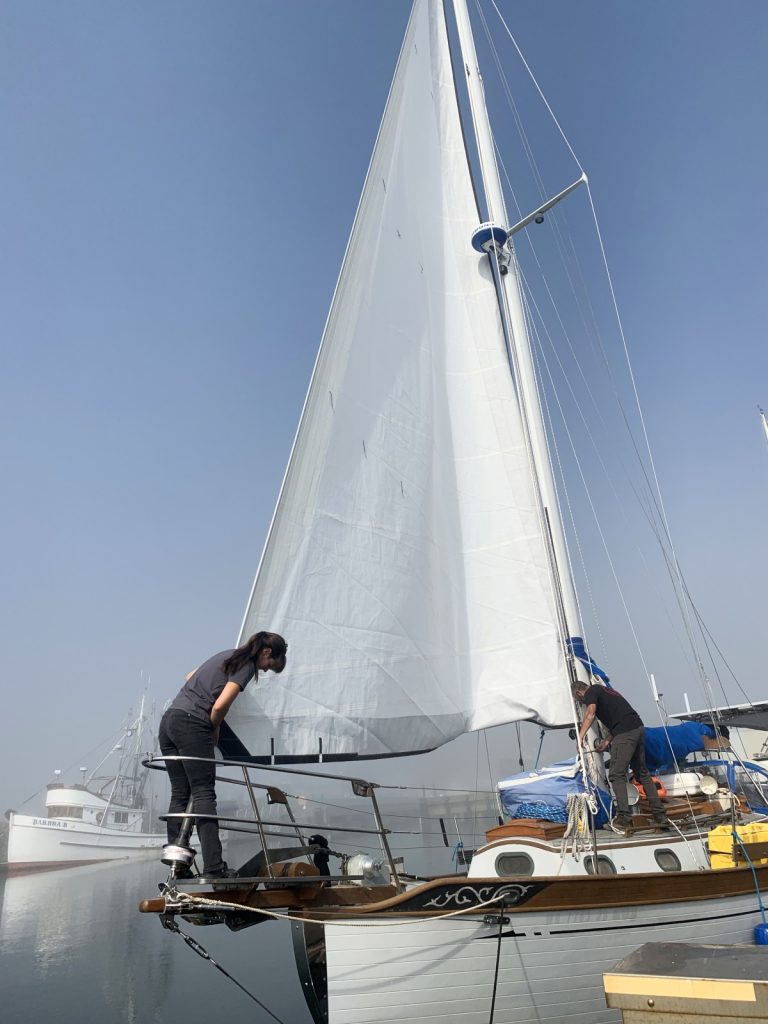 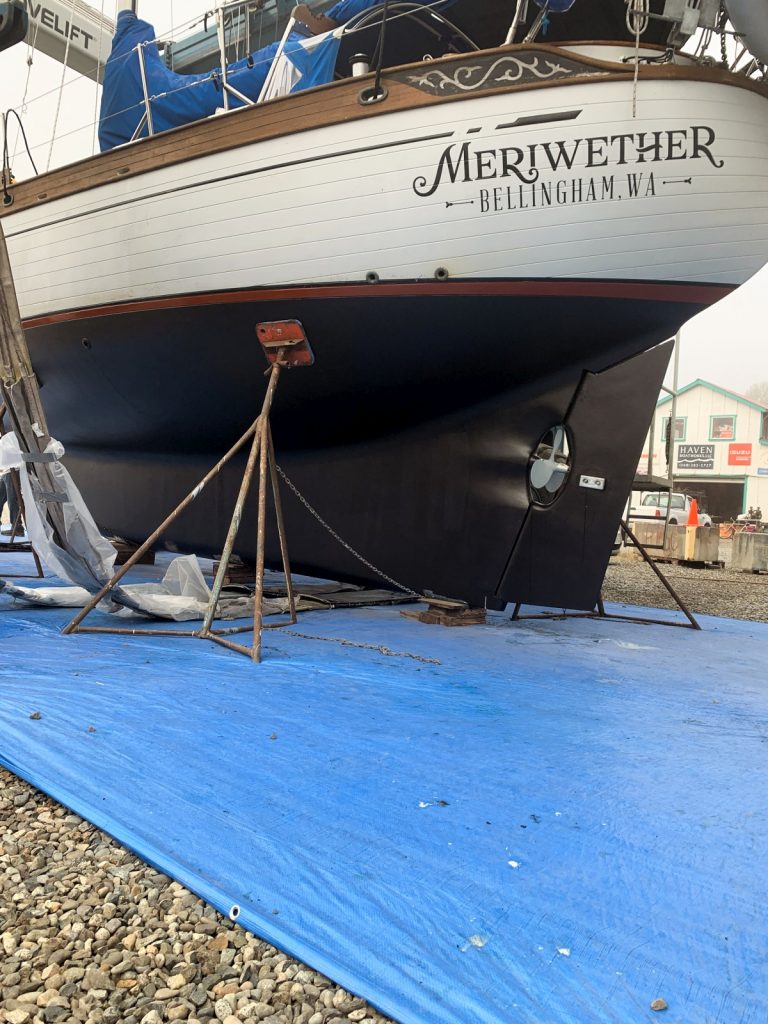