With just over a week to get to our scheduled haul-out in Port Townsend, we had to keep moving. Though we initially planned to visit Vancouver, we chose to bypass it to spend a couple days in Victoria instead. This route would bring us through BC’s Gulf Islands, on the South East side of Vancouver Island. But first, we had to cross the Strait of Georgia to get back over to the big island.

After one day of southerly movement – motoring, of course – we pulled into the aptly named Smuggler’s Cove. The tight entrance into the cove was unique, but easy enough when following the charts. Once inside, we had our choice of locations to stern tie to the rocks and enjoy a peaceful evening before crossing the Strait. A small hike that evening gave us a nice view of Meriwether bobbing around in the anchorage. Returning to the boat, we took this time to break yet another prop on the small electric outboard, by hitting a well charted rock. It is always a fun adventure of replacing the plastic prop with a price tag as if it were made of a material only found on Mars. 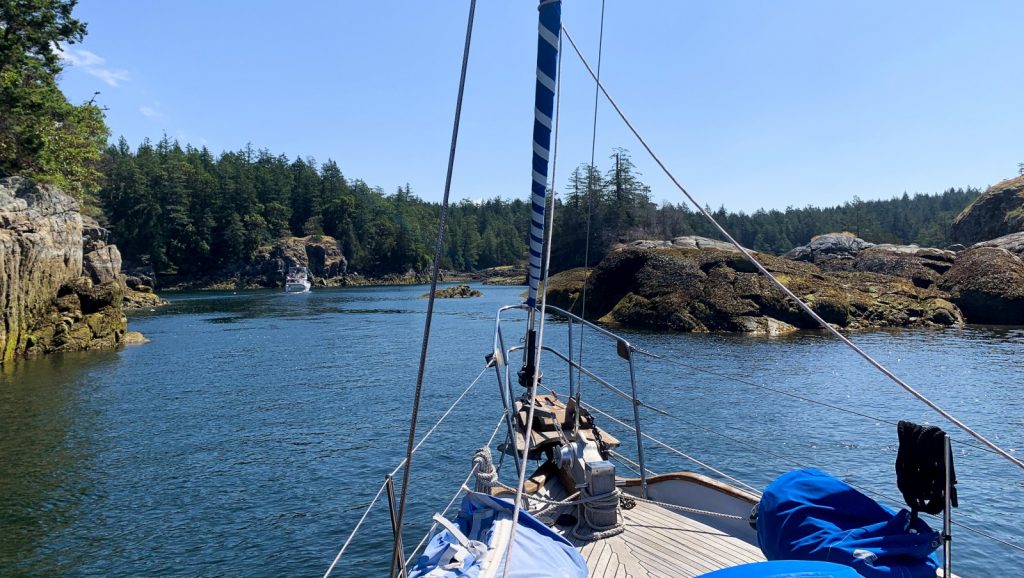 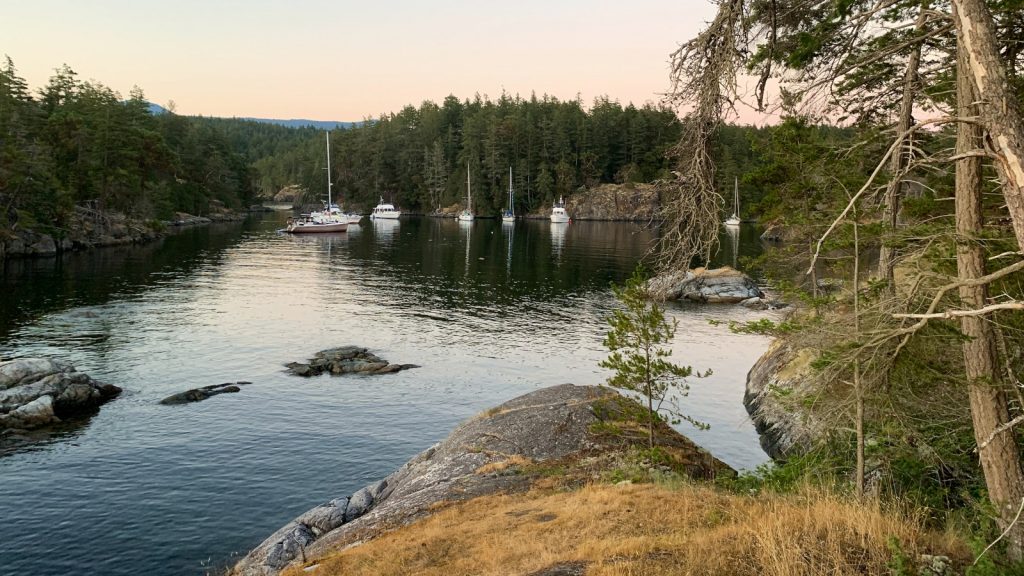 Crossing the Strait went easy enough. With no wind to speak of, we motored the day, dodging ferries along the way. A pair of dolphins came to ride our bow, but soon got bored with us as we were only motoring {insert eye roll here}. Soon enough we were entering Gabriola Passage – at slack tide of course – to get inside the greater Gulf Islands area. Here we were met with a tug hauling a huge raft of logs. Of course we gave way to the train of wood being steered by a much smaller tug at the rear known as a “pig fucker” (serious). It sure would have been easier to know how best to get out of their way if they had answered our hail on the VHF. Tug boat captain’s just do not seem to care to help us help them. Not once have we gotten an answer from a tug. We did the best we could, which seemed to be enough. 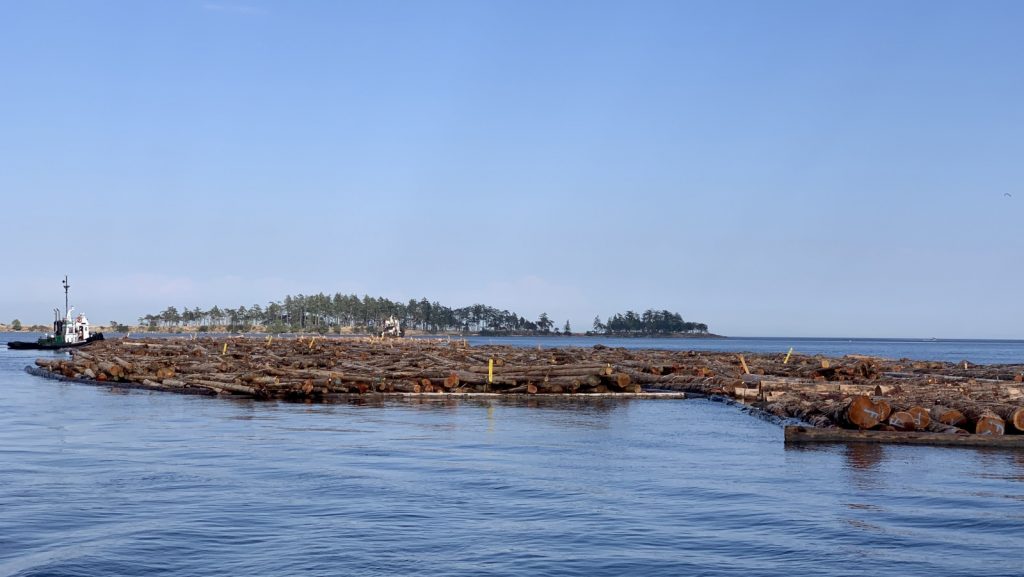 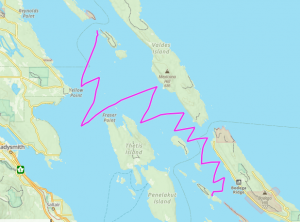 Passing by a perfectly protected anchorage – writing it off as likely too busy – we arrived at a much more sketchy anchorage which proved to be just as busy as we thought the first was. Frustrated, I planted our anchor instead of back-tracking to the first. The night was spent rolling around in the unprotected waters, closely monitoring the distance to the rocks right outside our door. In the morning, we left and got straight to a quite fun day sailing.

Sure, it was upwind sailing, but we are good at that. The winds were frisky, but well within our comfort zone. We sailed though islands, reefs, moored cargo ships, and numerous other boaters too timid to raise their sails. For four hours we tacked a total of 14 times over the course of more than 20 miles before pulling into a secluded anchorage that no one else seemed to care about. We had moved only 12 miles as the crow flies from the starting point, but the effort was worth it, as sailing for a change brought us a lot of joy. We didn’t know it at the time, but this would be our last sail in what felt pretty much, almost, forever. 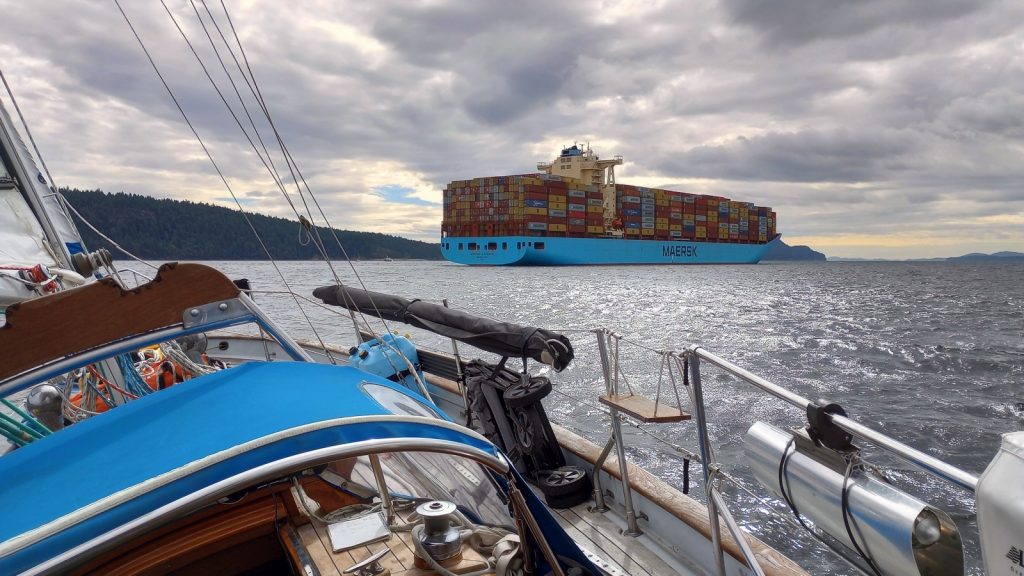 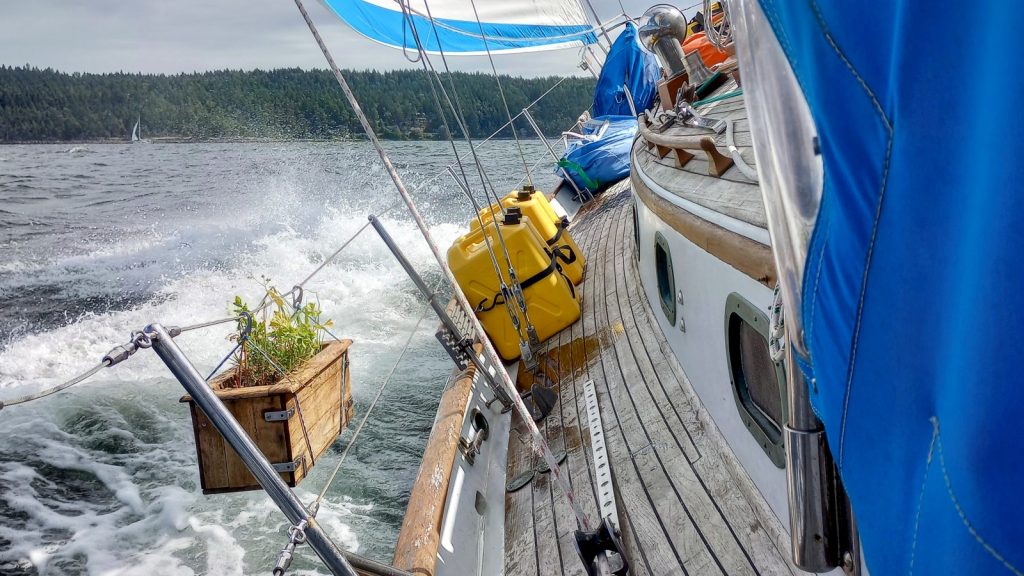 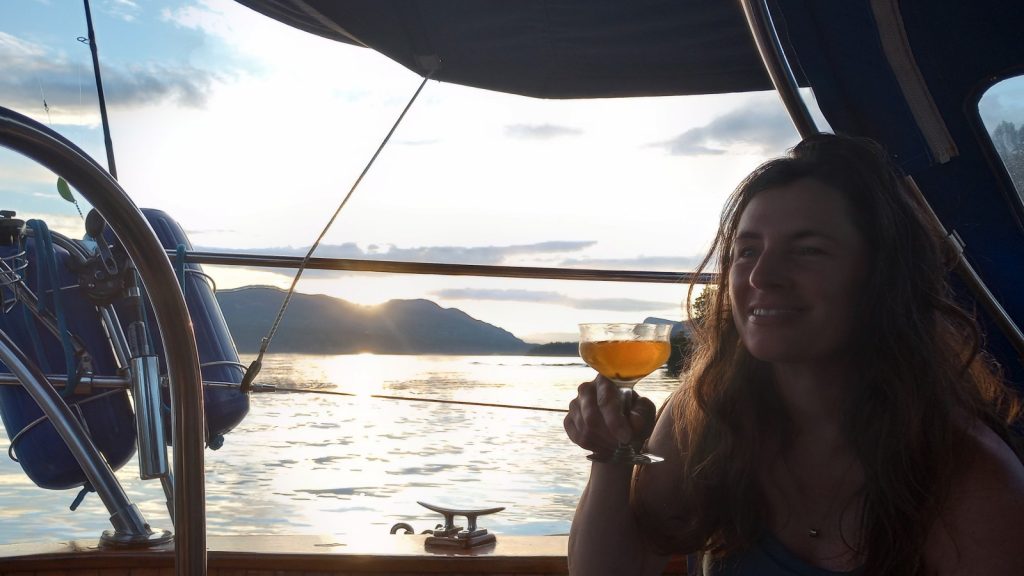 8am us: “Let’s sail this this thing while we’ve actually got some wind!” 12pm us (after beating upwind 20 miles in 20 knots to go 10 miles): “I’m exhausted. Let’s just find the nearest anchorage halfway to our destination.” The good news: It’s likely the only anchorage around where we’ll have no neighbors (unless the owners of the mooring ball pay a visit). – Kerri

We spent the next few days making small hops from one island to another, slowly inching our way towards Victoria. Russell Island, Portland Island, and Sidney Island got the honor of our anchor setting down beside them. I stepped off Meriwether for a short hike only once, Kerri twice. The number of boats out were still above our liking, but it is what it is. 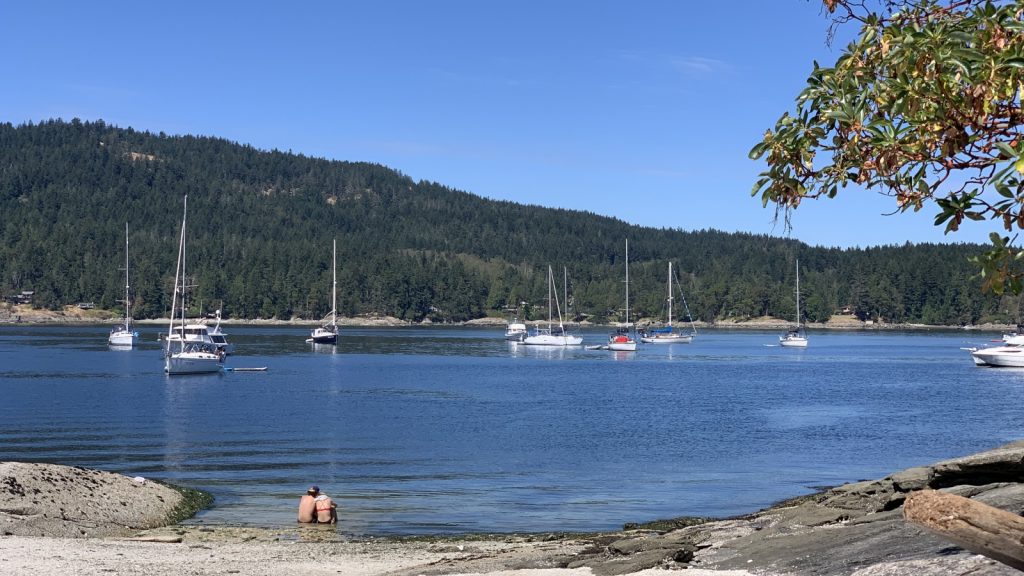 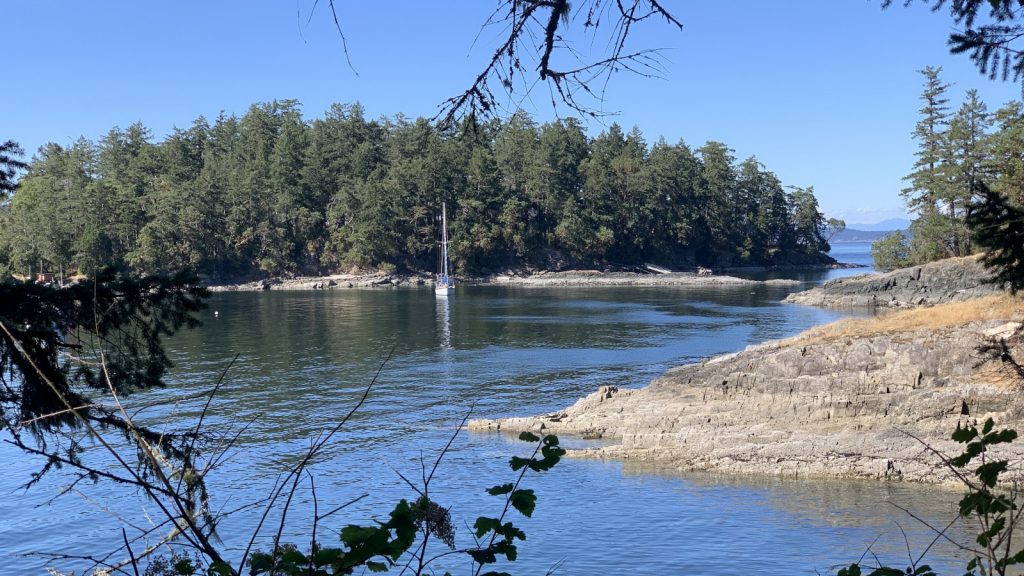 One final day of motoring brought us into Victoria, where we squeezed Meriwether into a slip just under the Empress Hotel. Spending a few nights in Victoria meant all our food in the fridge went bad as we ate out just about every meal. There is a lot to see, and we did what we could to cram in as much as we could. The time also included Kerri crunching through some work while I crunched through the daily chores of laundry, boat cleanup, etc. Victoria is very much a tourism town, with crowds walking the waterfront from morning to well into the night. All the restaurants were packed full, if they were open at all. We were still finding a lot of the Alaska “meh, maybe we are open, maybe not” mentality even this far south. I don’t think either of us would say the food was anything special. On the contrary, only one of the meals was worth half the price-tag, while all others were seriously lacking any sort of flavor at all. Seriously, Canadian’s can learn how to sprinkle some seasoning. We really did enjoy Victoria, though. It was a fun, and full of life, and everyone we met was friendly as all heck (aw, swarry for cursing ay). 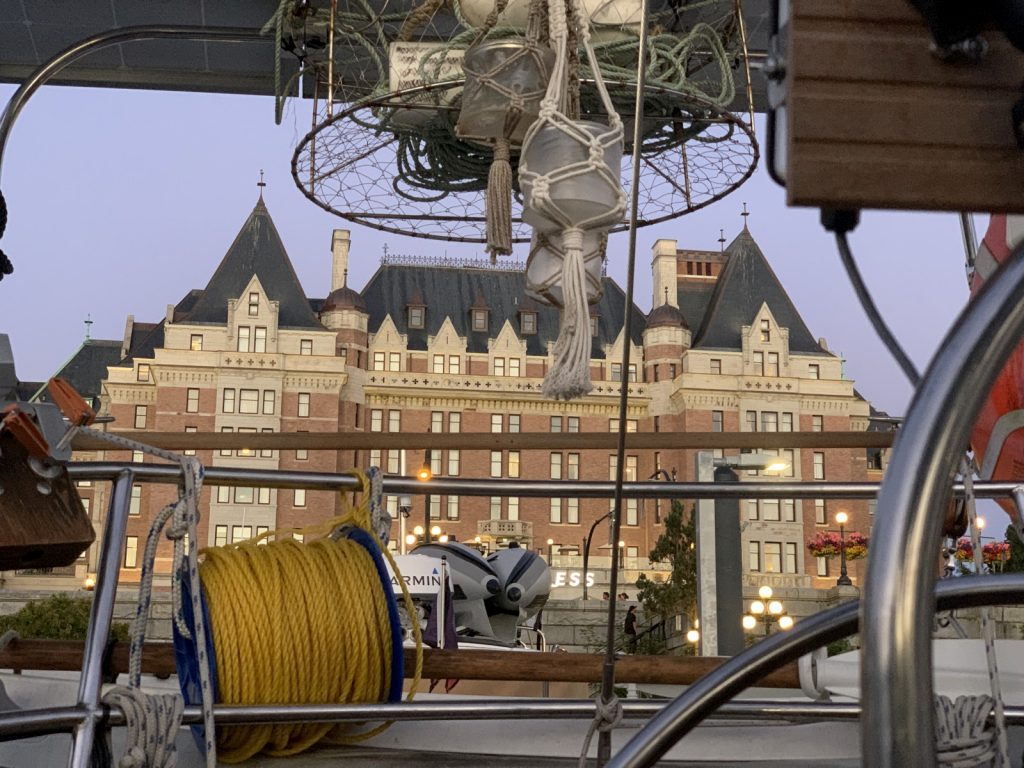 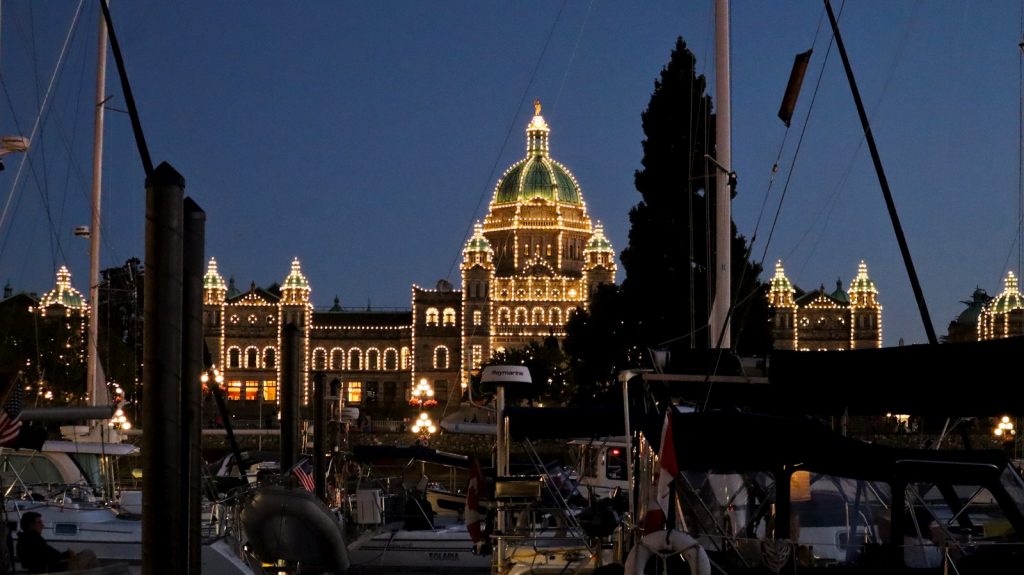