We saved our final “big ticket” adventure in Canada for last; Princess Louisa Inlet. It is talked about by anyone that has sailed around the Puget Sound or British Columbia as a must-do location. It is easy enough to see images of it from past visitors and know that it is worth the effort, and an effort it is – especially for a sailboat. It involves navigating a 40+ mile inlet, usually with no wind to sail, then timing a rapid to get into the main attraction… where there are few places to anchor.

We were lucky enough to be able to sail about half the distance on our voyage up the inlet. Winds were mild, but strong enough to fill our jib-only sail plan. Leaving super-early gave us all the time in the world to arrive at the rapids without a need to rush, so a calm sail hit the spot. We knew we were lucky to be sailing at all, so spent no time complaining about anything going on that day. 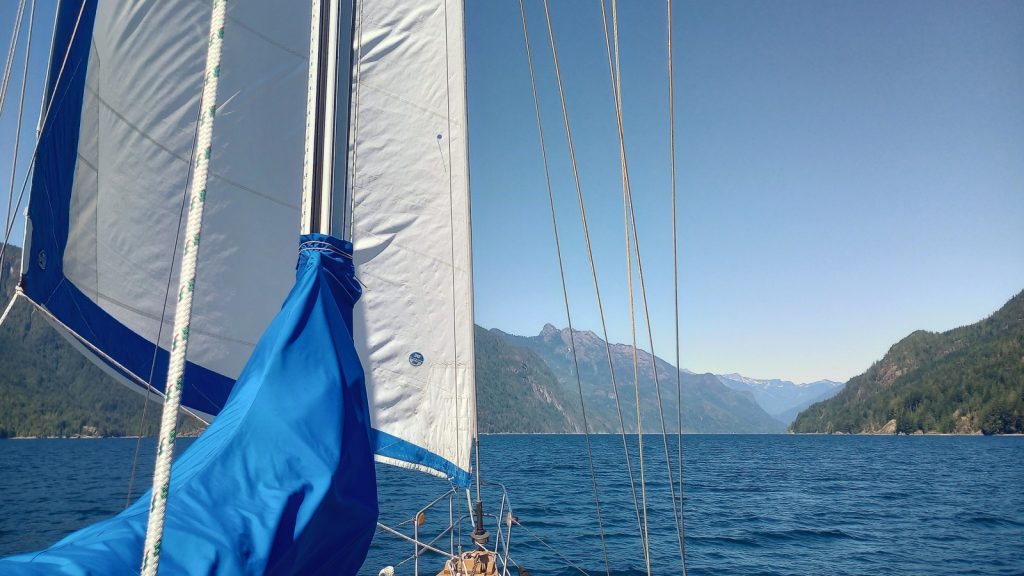 Many, many hours later were wee arrived at the rapids a good hour or more ahead of slack tide. Since we were so early, the choice was easy; bring the boat to a stop in the middle of the inlet and go for a swim to wash away days of stink and grime. We were not alone waiting on the rapids, but space was generous to just hang out adrift. Soon enough we were getting into the pre-determined formation [by arrival time] to pass through the rapids and into Princess Louisa Inlet. With slack tide comes the traffic jam of boats going in, and out, all within the same few minutes on the clock. We took up the rear of the line, and passed through with no drama to speak of. 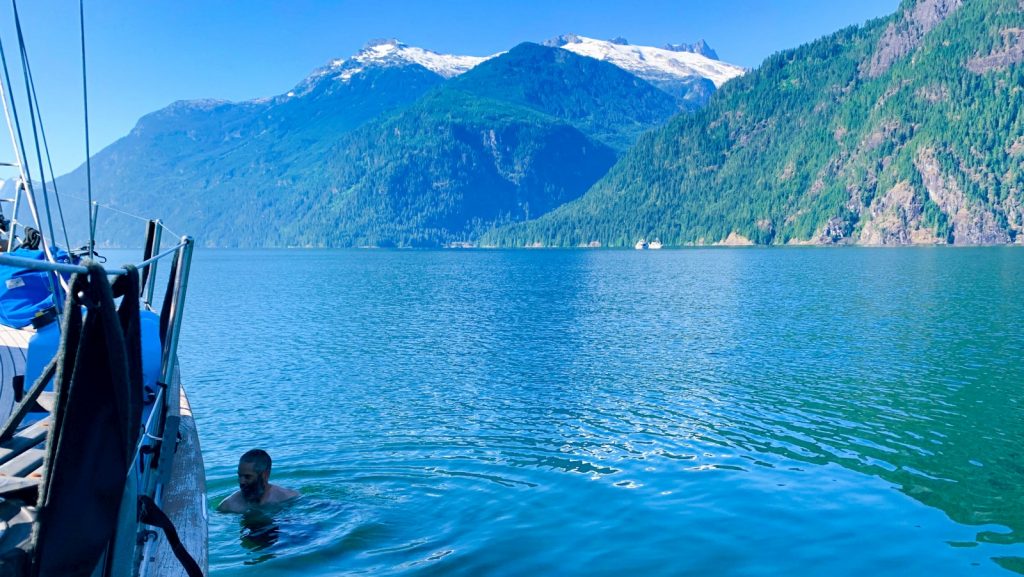 As we neared the end of the inlet, to dock at the official dock, radio traffic was spiking as people already on the dock were assisting the arriving boats find a space on the dock. Since we were the final boat in line, we were at risk of not having a space, but it all worked out nicely in the end. Literally, we took the very end of the dock, which by chance had the best view of the huge waterfall dropping into the bay. It was our back yard view during our whole stay. 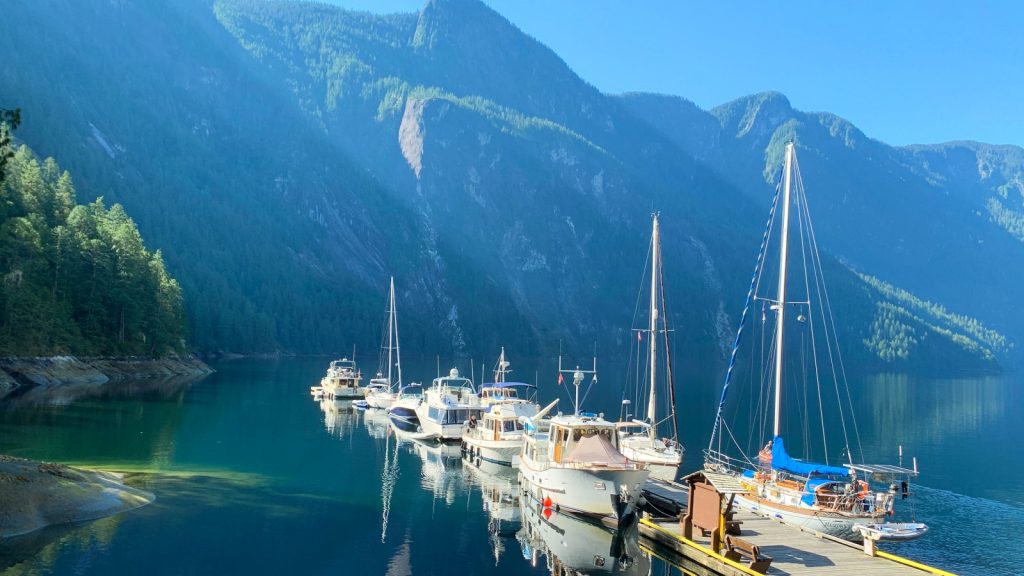 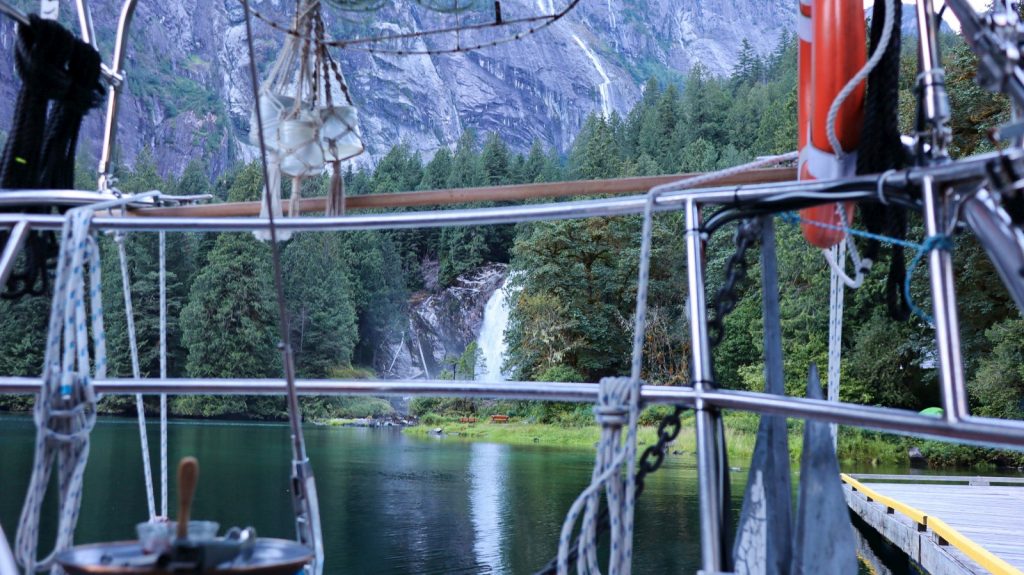 Princess Louisa lived up to the hype. It is amazing, for sure. Towering cliffs on all sides, with teal waters below. The waterfall demanded attention, and got it – it was unnatural to look away. It is rare that Kerri and I feel that awe anymore, and it was good to get re-acquainted with it. A short hike was taken to get a closer look at the waterfall, but otherwise relaxation was the only thing on the menu. The other boaters sharing the experience were pleasant and enjoyable. We even socialized with our neighbors on both evenings, once on our boat and the other on theirs. Cocktails, stories, and laughter ensued. 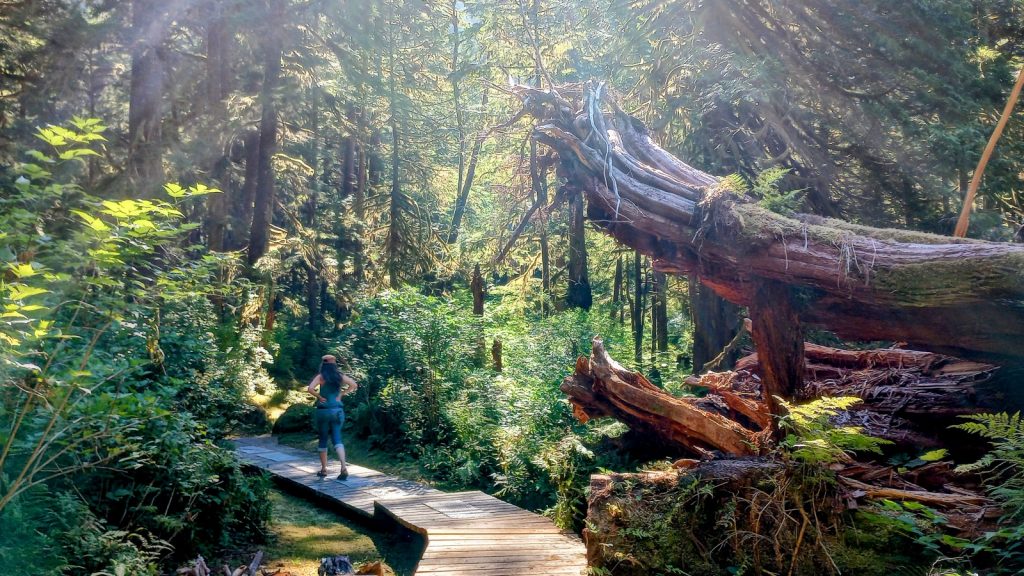 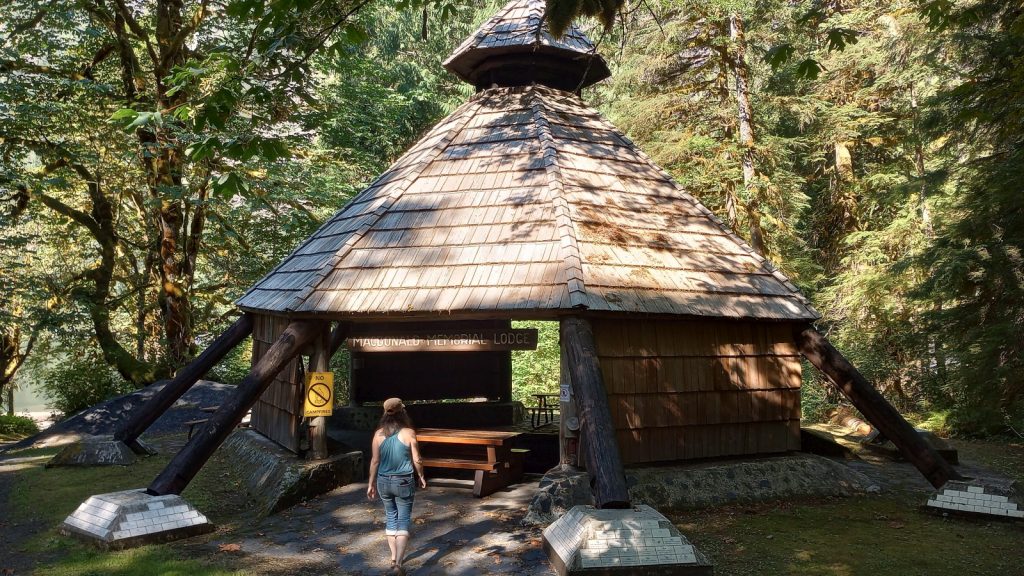 We left on the third day as our schedule demanded. The same forty miles of water lay ahead, this time with some serious wind – in our face. No sailing would take place during the eight-plus hours of motoring. Much of the time was spent in 30 knots of wind on the nose, making it slow going Just before the sun set we made it to our planned anchorage only to find it un-anchorable (is that a word?). So we moved to the dock at Back Eddy’s (a resort and restaurant) and took up a space on the dock that a lesser experienced sailor might have worried about squeezing into. Us, on the other hand, slid into the tiny space – against a stiff current – in a master class of docking (yea, that’s right). We arrived just in time to get a burger at the restaurant before it closed and returned to Meriwether just as our Princess Louisa neighbors were pulling onto the dock. Some shuffling of boats was required to find space for them. 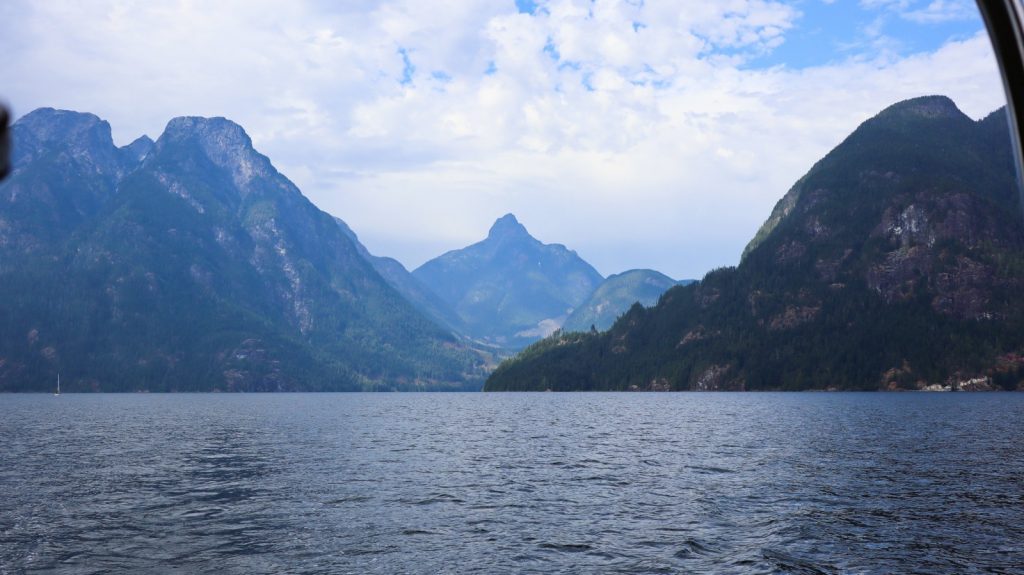 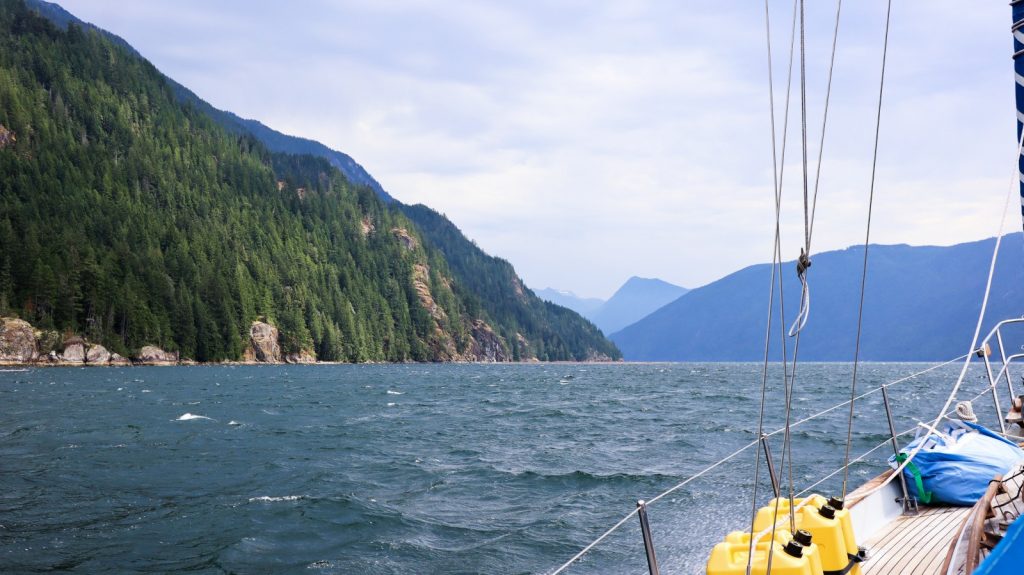 The verdict on Princess Louisa Inlet:

. After our negative experiences in Desolation Sound, it redeemed BC Inside Passage hot spots for us. Yes, it was still crowded. We arrived to claim the very last available spot on the dock (though, weirdly, it happened to be the best spot, with the best cockpit view of Chatterbox Falls, no space for a neighbor across from us, and close enough for the roar of the falls to drown out the hum of motor boats’ generators). Though, with a completely full dock, full mooring bouys, and a full anchorage by the end of every evening, the vibe here was quiet, calm, friendly, and neighborly. We even made new friends for the first time since Northern BC. The scenery was lovely—when we did our best to take it in for its own worth and not to compare to to the fjords in Alaska. Overall, even though it’s a long slog — a 35-40 miles with no viable anchorage and rapids at the end that you have to get to on time for slack or you’re screwed — for a sailboat (mostly motoring) at five knots, it was worth the detour for us. We stayed two nights and did some very needed decompressing and resting here.