The marina situation in Prince Rupert leaves a lot to be desired. There is very little space for cruising boats in the two tiny marinas. The docks advertised on the charts and in the guide books for customs and such, simply do not exist [anymore]. We were lucky to have gotten some space at the yacht club for the couple nights we were to stay in town. Said space allowed us to do a bit of socializing with other cruisers, including an evening onboard our neighbor super-yacht for drinks. But, after a couple days running the standard chores (laundry, groceries, booze, etc) we were ready to get back on the move, so we did just that. 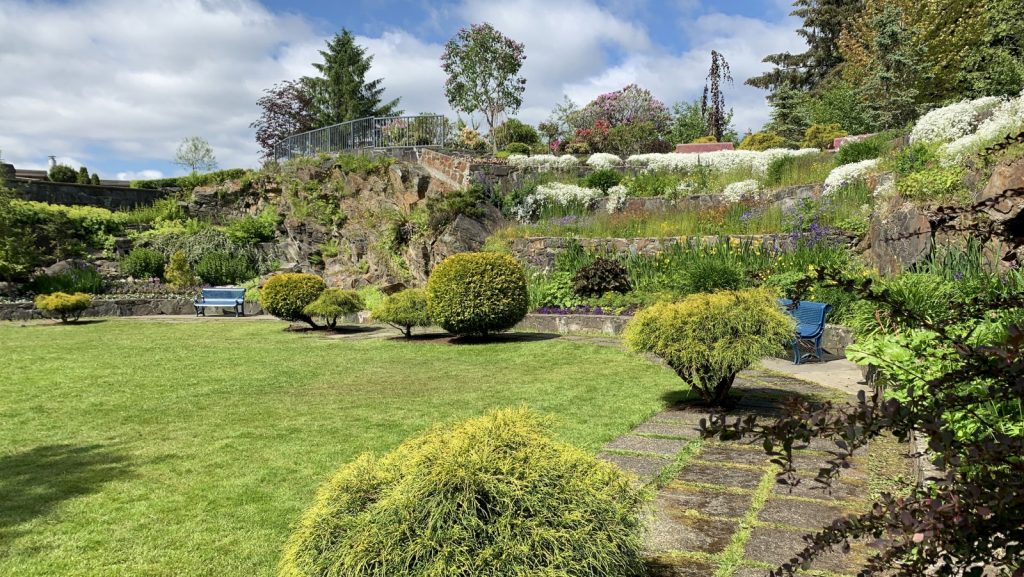 The tiny park was an oasis within the asphalt jungle of Prince Rupert. 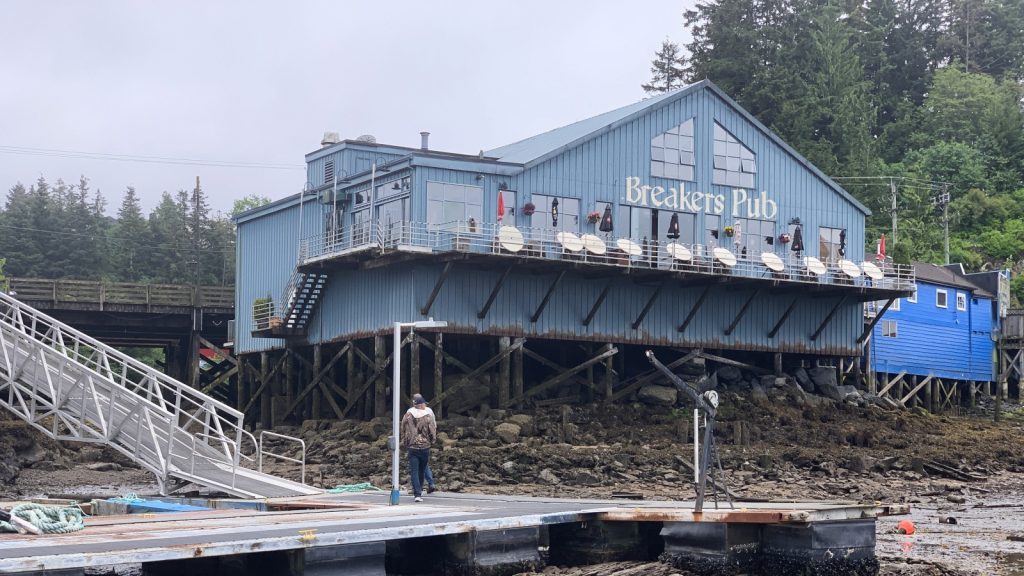 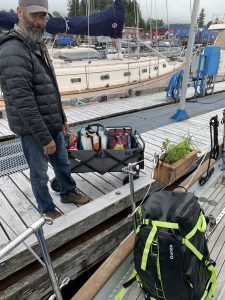 The grocery run. Both the wagon and our large backpack were filled. Now where to store it all onboard

Pointing Meriwether to the south we motored out of the busy shipping port that is Prince Rupert, ensuring first to irritate a cargo ship Captain thanks to some miscommunications on my part. Eventually he had to lay on the horn to make his point, at which time I got said point and took immediate action. Now, I had tried to reach him via the VHF to avoid any such troubles, but he chose not to respond, so I’m not the only person to blame. Nevertheless, it got sorted and we went our separate ways.

The goal on this day was a simple 20-mile hop to a nearby anchorage. It would give us good positioning for a much larger voyages the following days to areas we wanted to explore. The overnight anchorage was nothing special – as was proven by the fact we didn’t take a single photo of the place.

Timing the currents though the next passage was key so we had a schedule for the following morning. Winds were supposed to be somewhat on our nose and calming, or worsening (depending on the forecast), as the day progressed. The morning came and we hauled up anchor to get back on the move. As we exited out protected anchorage we were immediately met with two things; 1) a 20-knot wind in our face (almost double the forecast), and 2) a 2-knot current going the opposite direction than advertised. This put my in a seriously bad mood right away, and though we discussed aborting the day’s travel, we did not. Hours would pass, all of which were motoring into winds at 20-25 knots and the chop that comes with that wind. Meriwether cuts through it all just fine, but our forward speed is heavily hampered in these conditions. My frustration grew as it was less than a week since we both agreed that we had to stop fighting weather conditions just to keep some arbitrary schedule. The weather rules all, and here we were again, opposing it for no good reason. Grrrr.

Four hours of boiling blood later we cut our day short at the first fall-back anchorage; Captain’s Cove. It turned out to be a nice little gem of a place to stay a night, not that you would know it. Once again, not a single photo was taken of the place. See what happens when I am in a bad mood? 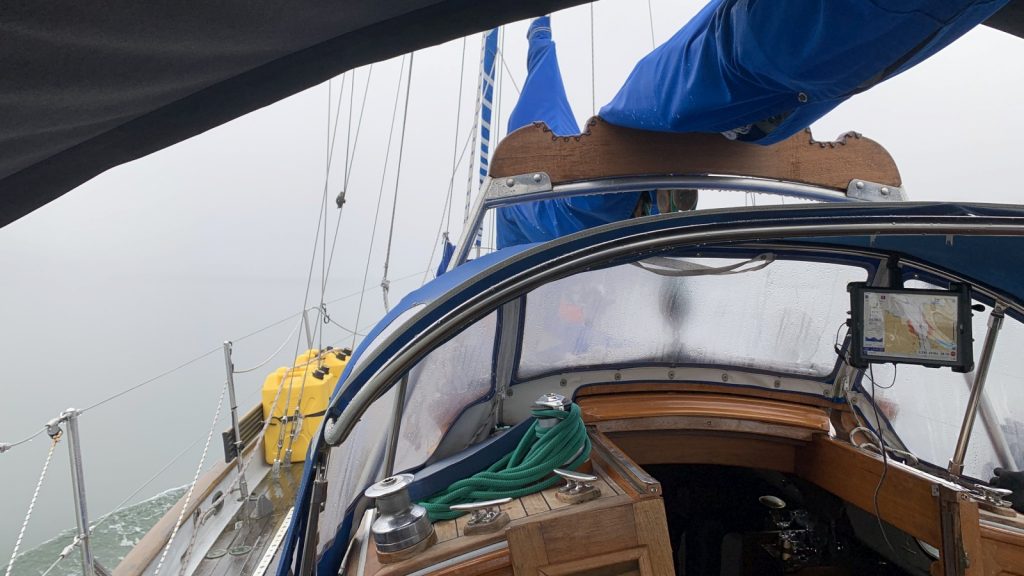 Welcome to the pacific northwest. Now prepare to get wet

We left early – under heavy fog – the following morning to ride the ebb current towards our destination some 32 miles south. Wouldn’t you know it, the ebb never materialized, making for an extra long day. At least, by the second hour, we did get to raise the sails… for two whole hours! The rest of the six+ hour day was spent motoring.

The anchorage – Moolock Cove – was so small, it required a stern tie. This is something we had not yet done in our career as sailors, but we pulled off like pros – I think. At least, there were no pros around to tell us we did it wrong.  It was a pleasant little spot to hang out after a long day. The number of jellyfish hanging out in the waters below Meriwether was staggering, and the way the camera chose to capture the reflections on the water surface made for some very interesting images of jellyfish in the sky. 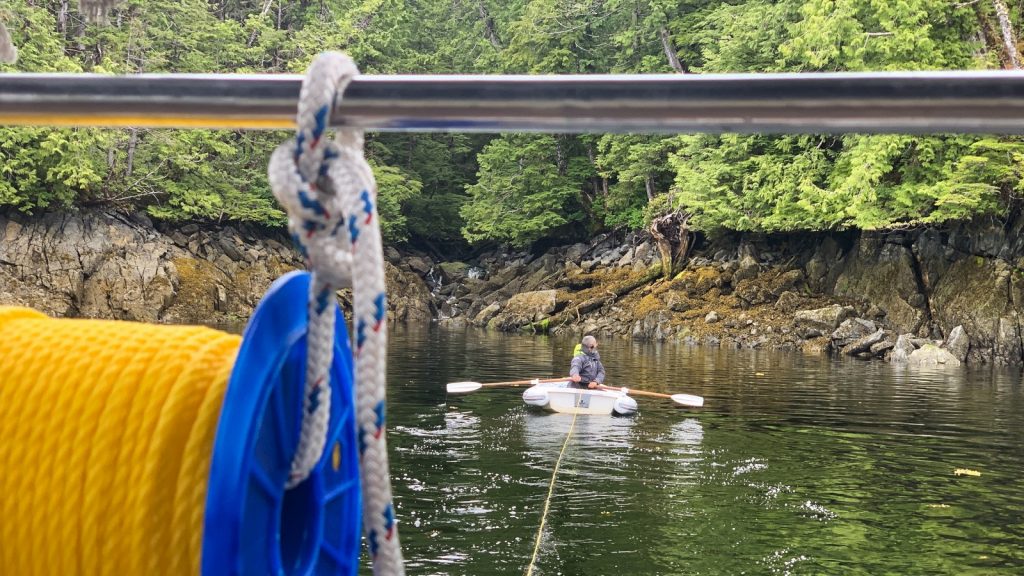 Finally, we get to use that spool of line we bought years ago 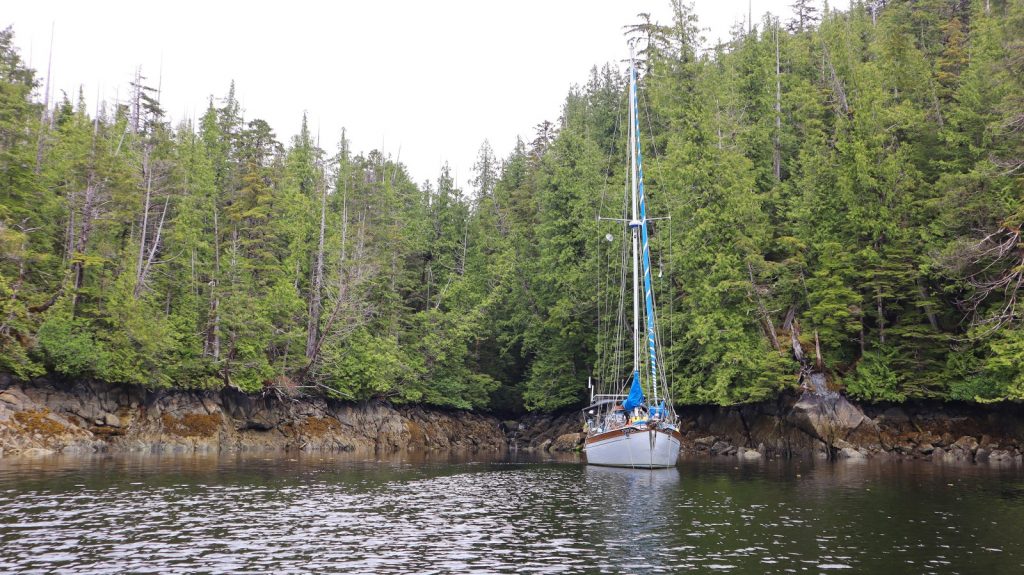 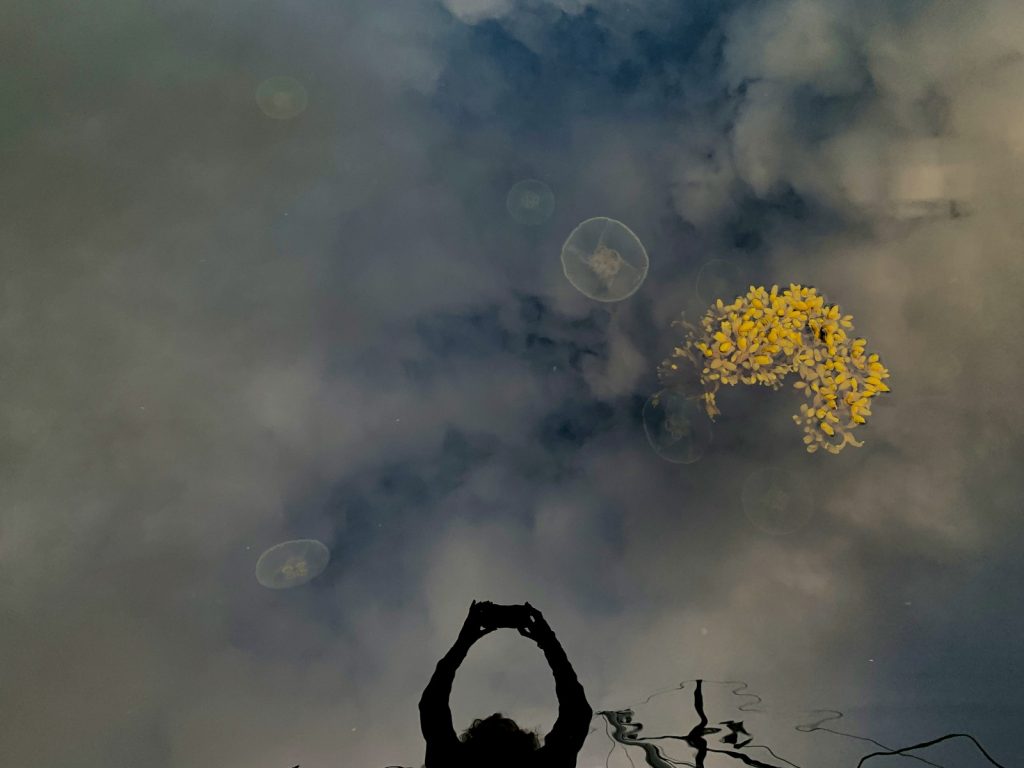 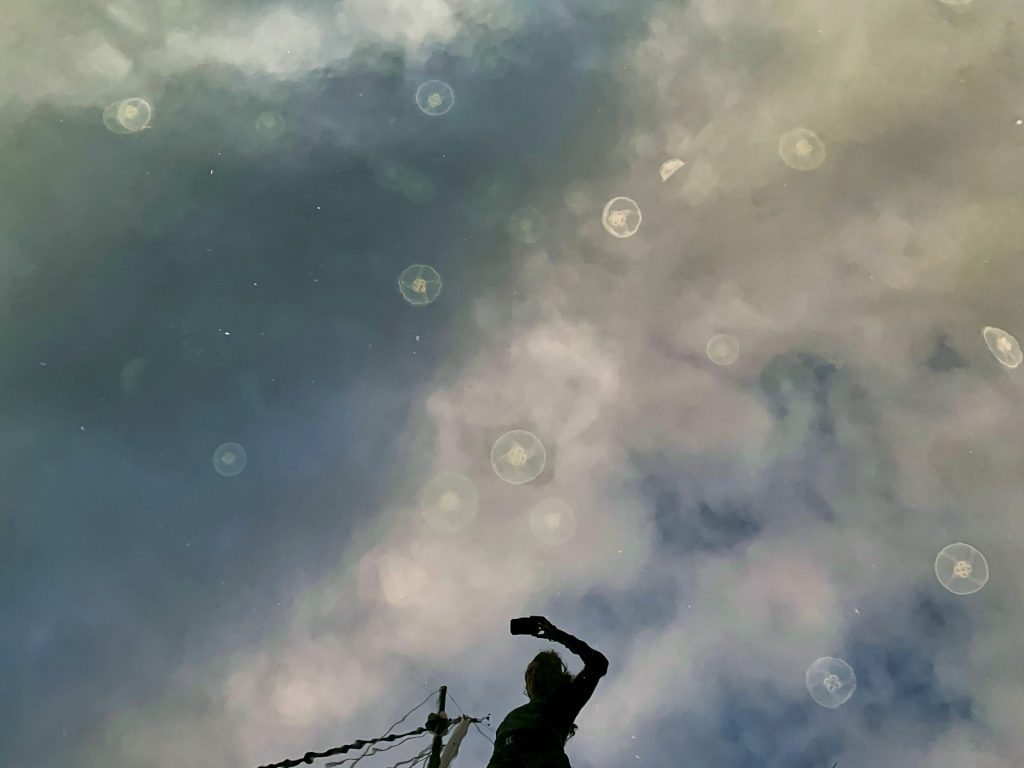 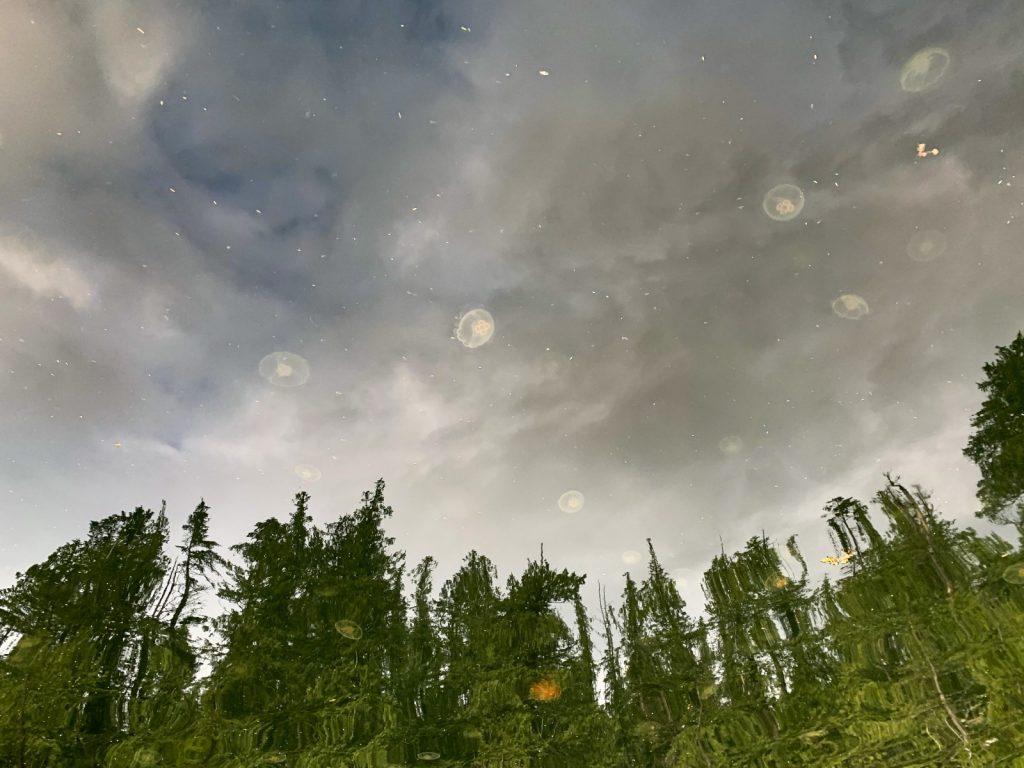 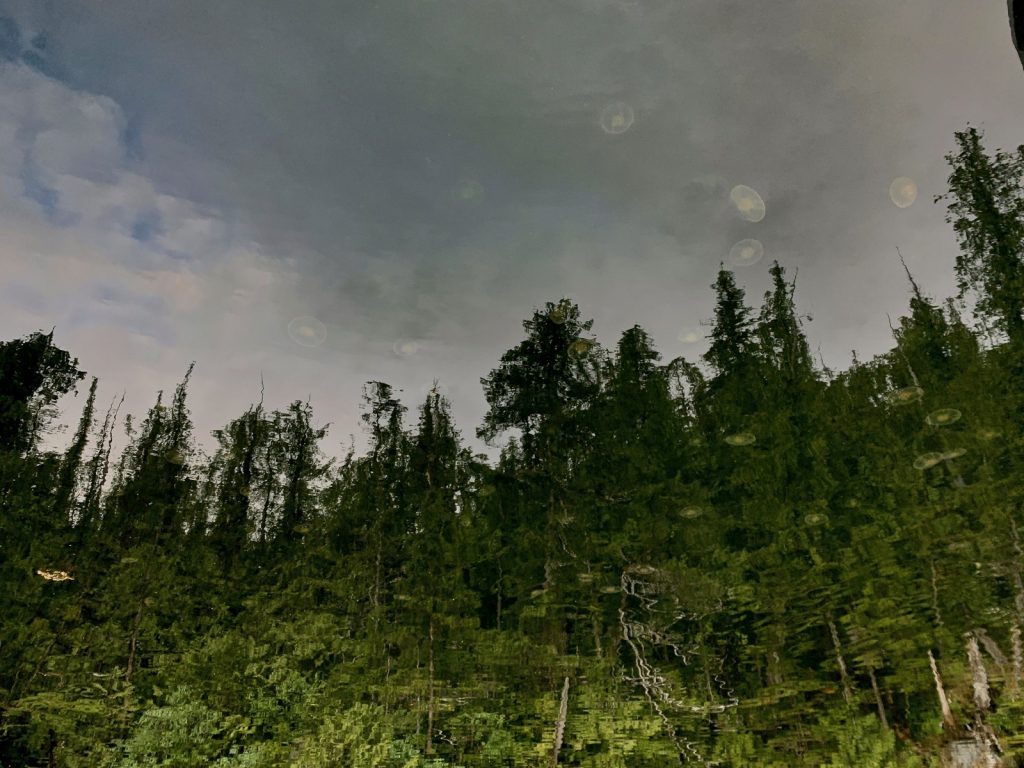 Another early start the next day. This time only a 27 mile hop taking just over five hours, yet we got to sail less than a half-hour of it. By this time I do not even have memory of the transits between anchorages. It is all just a blur of trees and water with the noise of our old Perkins (leaking fluids again) rumbling away until ears bleed. Weinberg Inlet would be our home for the night. Nice enough anchorage, though we took it easy and did little to nothing for the afternoon and evening. Including, once again, not taking any photos.

Our fifth consecutive day now, and we thought we would be traveling only a few miles to the anchorage just around the corner. It is a “must see” place for the white sandy beaches. Apparently, sand is in extremely limited quantity in Canada (Alaska too), and between the locals and the guide book we made sure to come to McMicking Inlet to see it. Both of us ex-Californians, the few yards of sand was a bit of a let-down, so we chose to continue on for the day. What followed was an 8.5 hour, 40+ mile, day… ugh! At the least we got to sail about half of those hours, which makes the long day a whole lot more enjoyable. Besides the actual sailing, the only real happenings were Meriwether, a cruise ship, and a tug boat hauling a large load all converging in a single half-mile of space. We had gone days without seeing another boat, then three of us all right here, right now. Spooky. 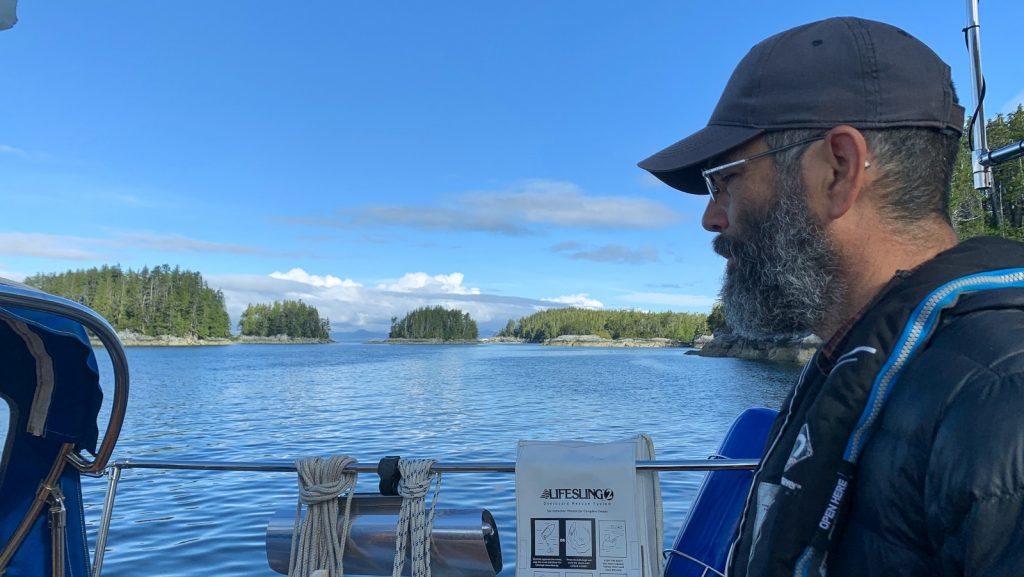 The day ended under sail – literally dropping it only a few hundred feet from where we dropped anchor – at Ramsbotham Island where we rested the remainder of the evening while watching even more jellyfish loiter around Meriwether.

Day six started just like all the others – early and underway using the motor. Another 32 miles and 6+ hours under motor, with the only happening being that of a visit from some local dolphins who thoroughly enjoyed playing at the bow of our speeding boat. Another narrows, and a few more hours would get us to the village of Klemto where we were met with a large sign stating that visitor were till not welcome due to COVID. After six days and 170 miles (the vast majority under motor) I was ready to get off the boat and into a cheeseburger, but it would have to wait. 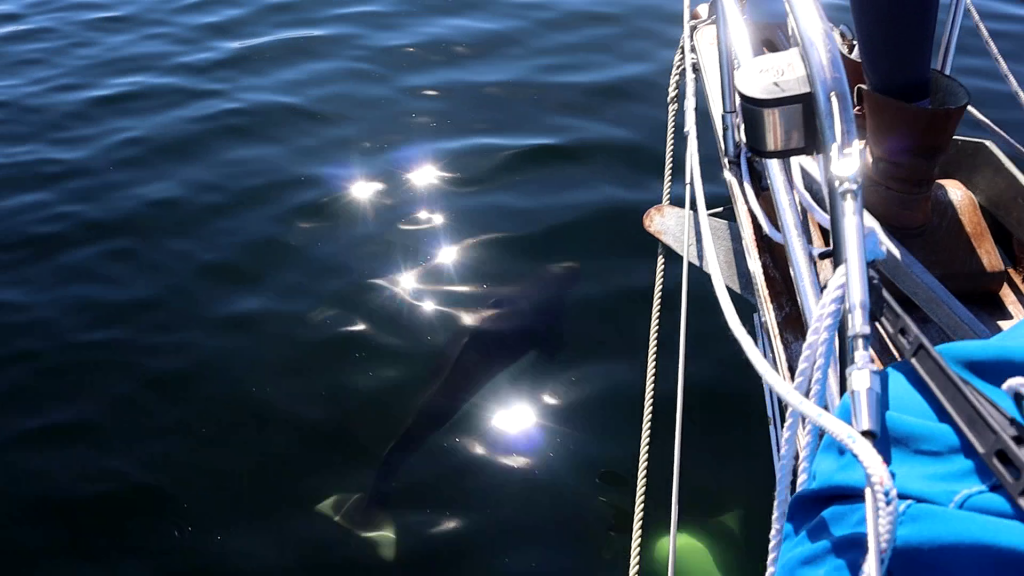 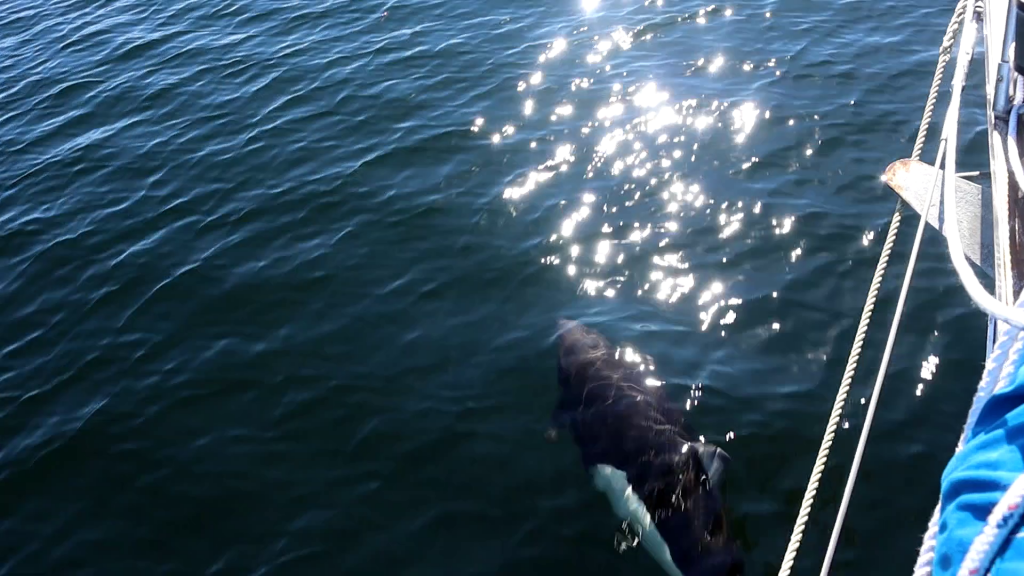