A two day rest was in order after the six consecutive days of movement last week. The small village of Klemtu, or just outside it in a nearby anchorage, was our safe haven for this time of rest. Not much was happening in the village itself anyway. It really only consisted of a resort, still closed by COVID. The anchorage served us well and came with the full luxury of a cell signal. 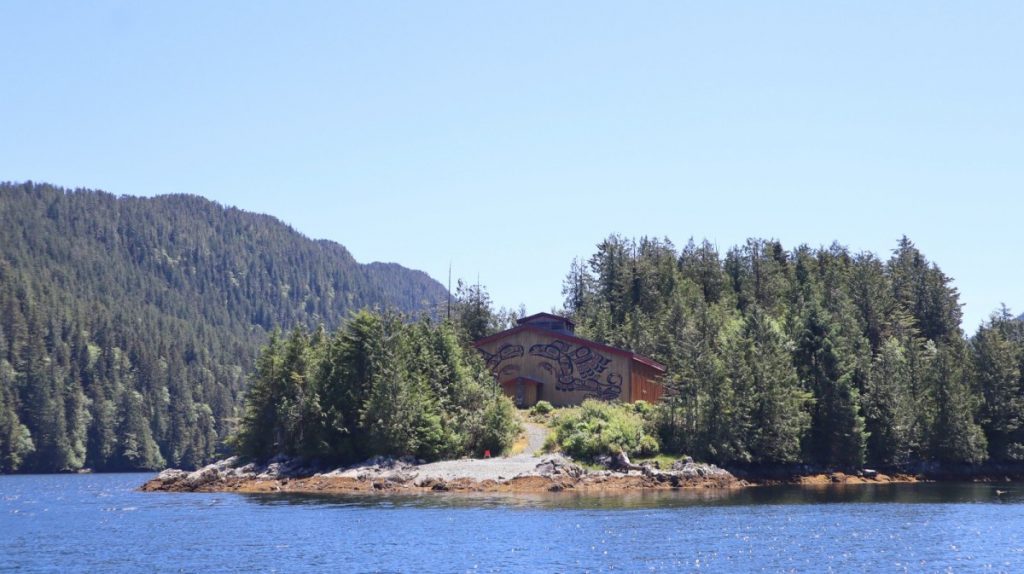 Nearby, on the small island separating us from the main channel, was the local’s cemetery. We didn’t know it at the time, but once we had paddled over to inspect the “what is that on the shore over there” object, we found the full on cemetery in the trees. Besides all the zombie-lke gnats, the place was a bit spooky due to the plastic wrapped raised beds that each grave composed of. I partly expected to see an unburied foot sticking out from under the flowers, but lean more towards there being some unknown yet logical reason to plastic wrap the graves. We didn’t stick around all that long, choosing instead to return to the less-buggy Meriwether. 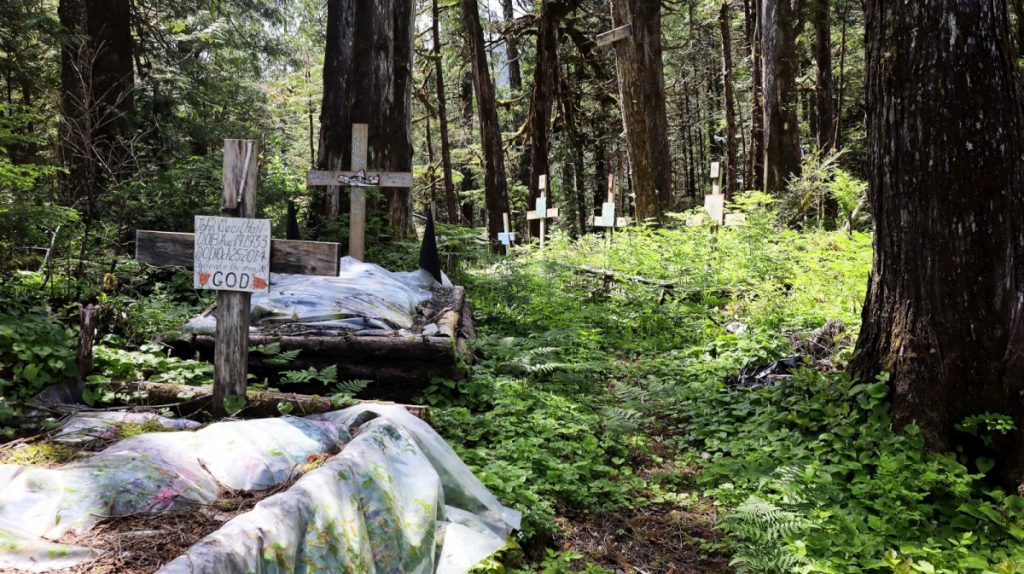 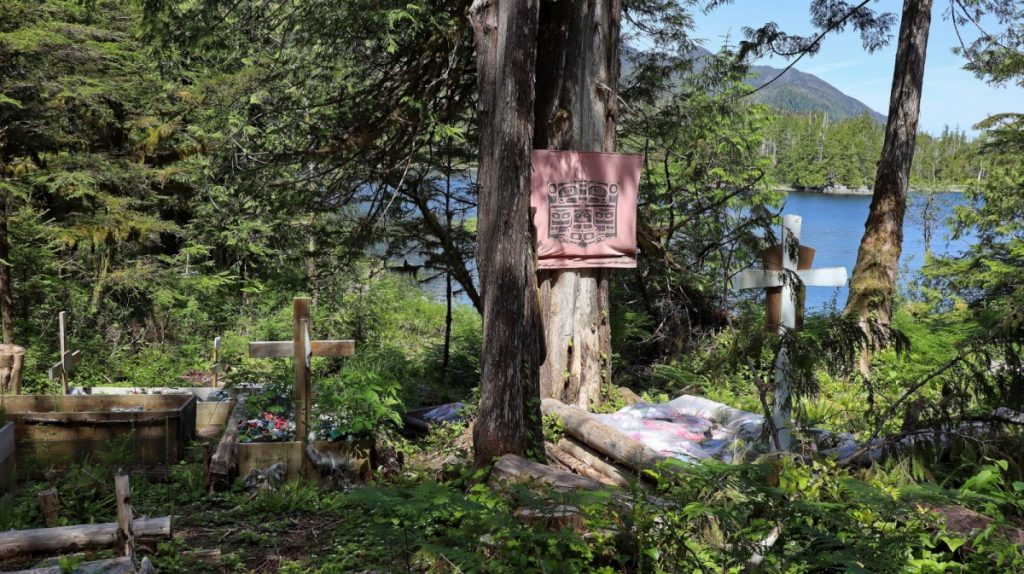 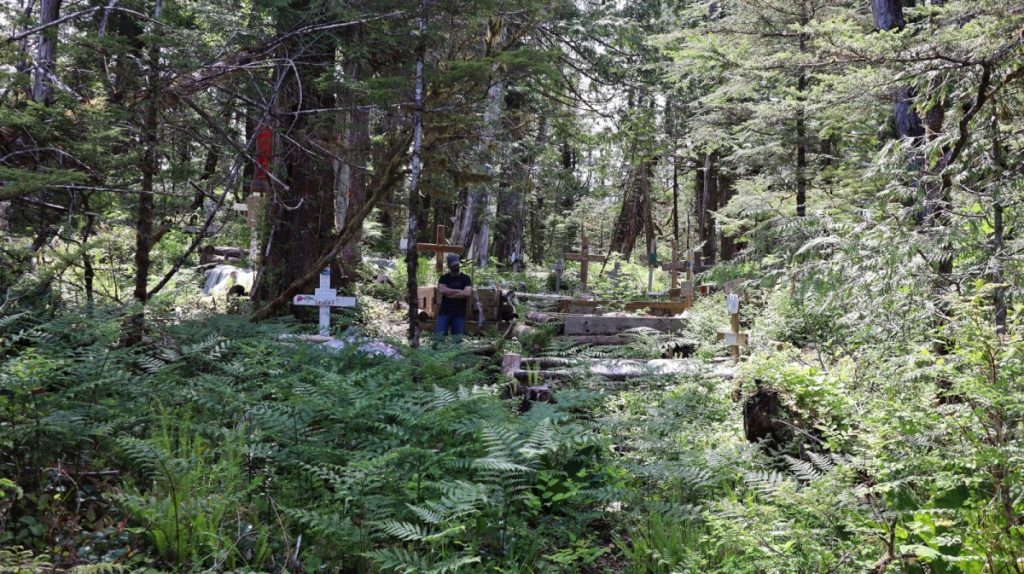 Our two day rest complete, we left the Klemtu area. It would only be a couple day hop to get to the next town to rest, restock, etc. A Marine Park lay at the half-way point between, but as we approached the Park, the anchorage across the way seemed a lot more interesting. It involved a very tight entry that can only be traveled at a higher tide – the depths being so shallow. The payoff for the risk was a small, shallow, intimate anchorage with 360 degrees of protection. We dove right in, dropped the hook, and explored the entire shoreline via the dinghy before calling it a day – the next morning scheduled to depart. 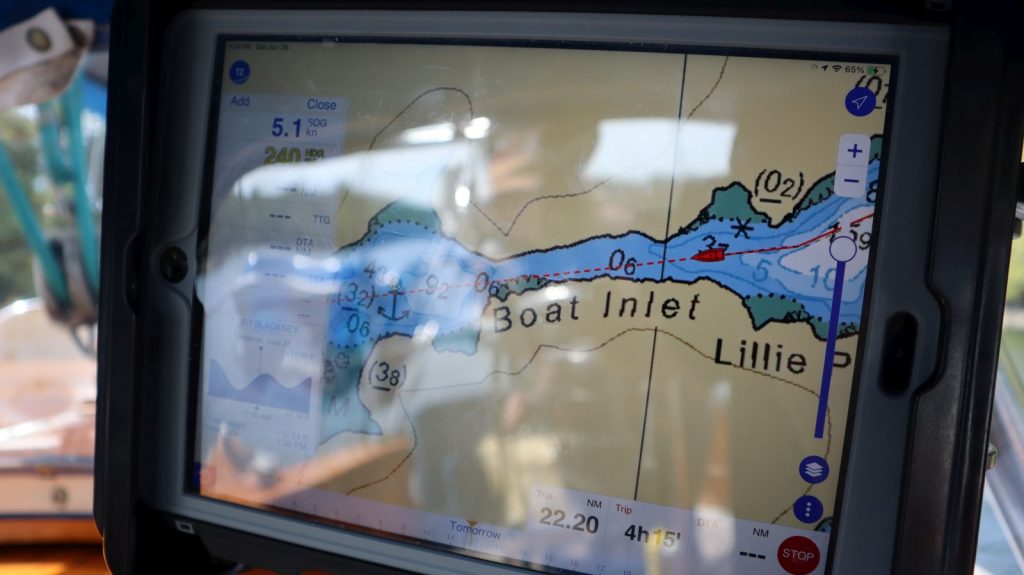 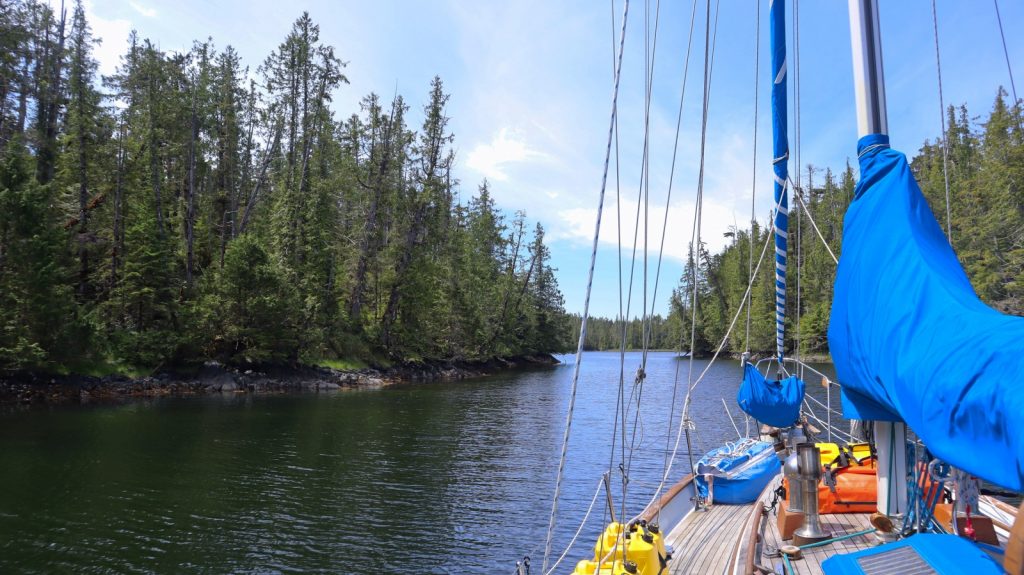 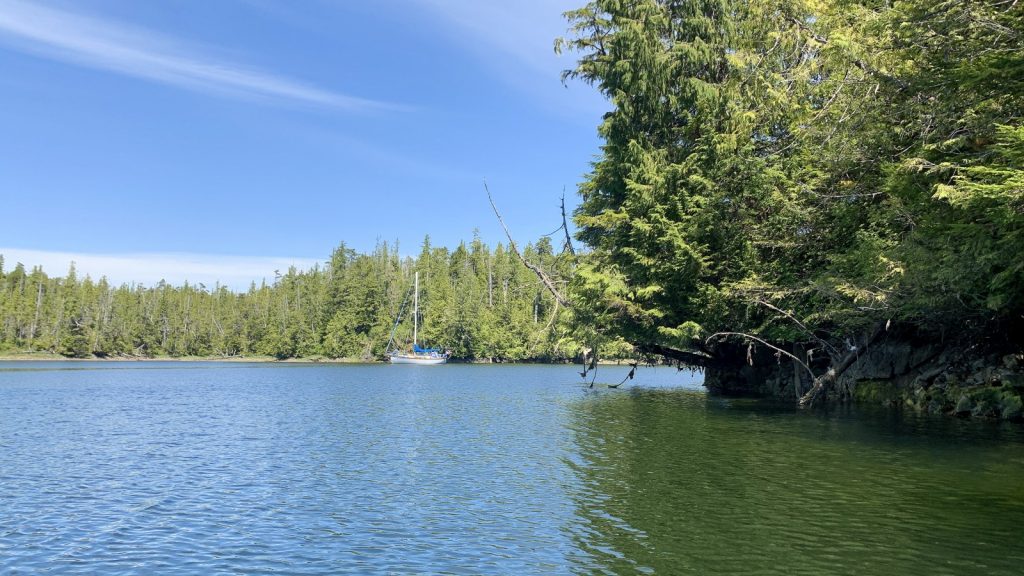 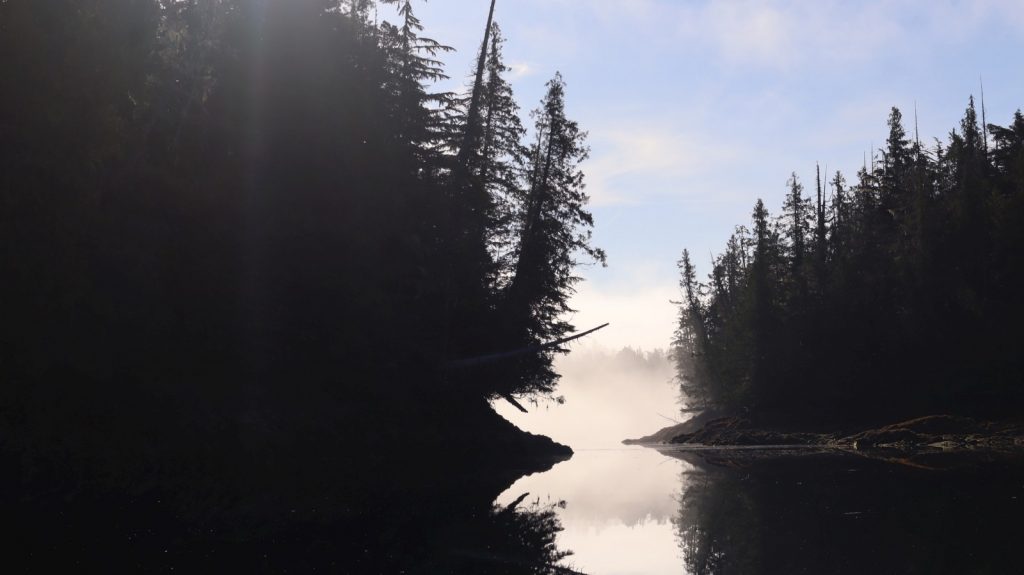 And depart we did, to make the last few dozen miles to arrive in Shearwater, BC. Shearwater is a resort and tourism town. The BC Ferry comes out here, so there is a bit more people-traffic then what we have grown accustomed to in recent weeks. The marina, being so small and popular, usually requires a well planned reservation, but we chose to anchor on the far side of a small island right off shore from the town-proper. This gave us a bit of quite and privacy for our multi-day stay. 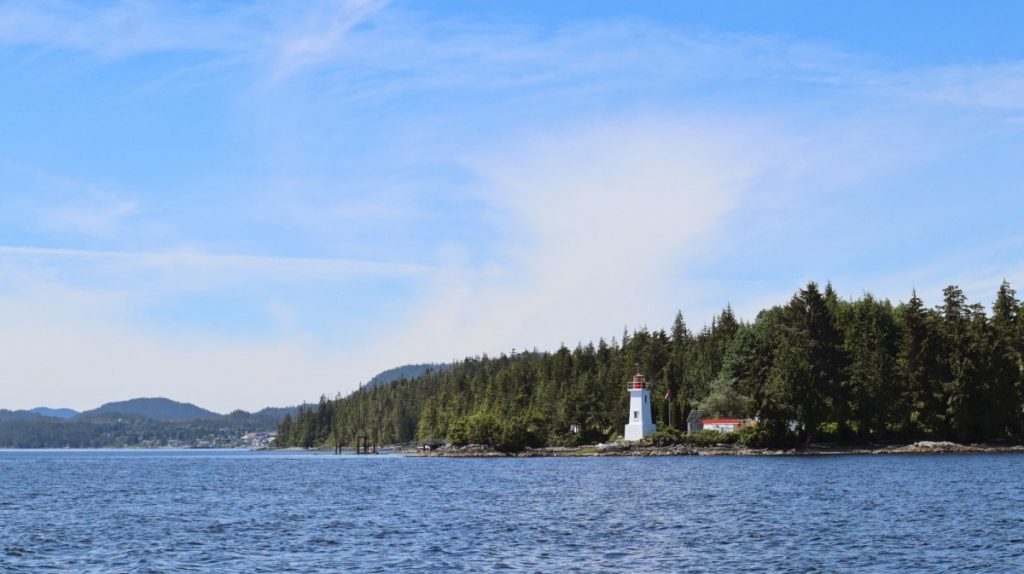 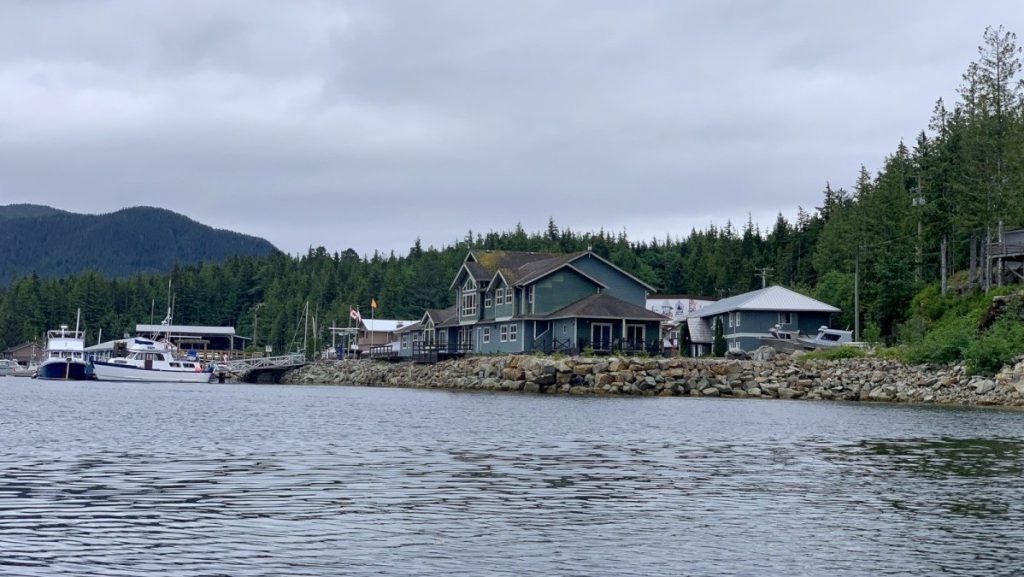 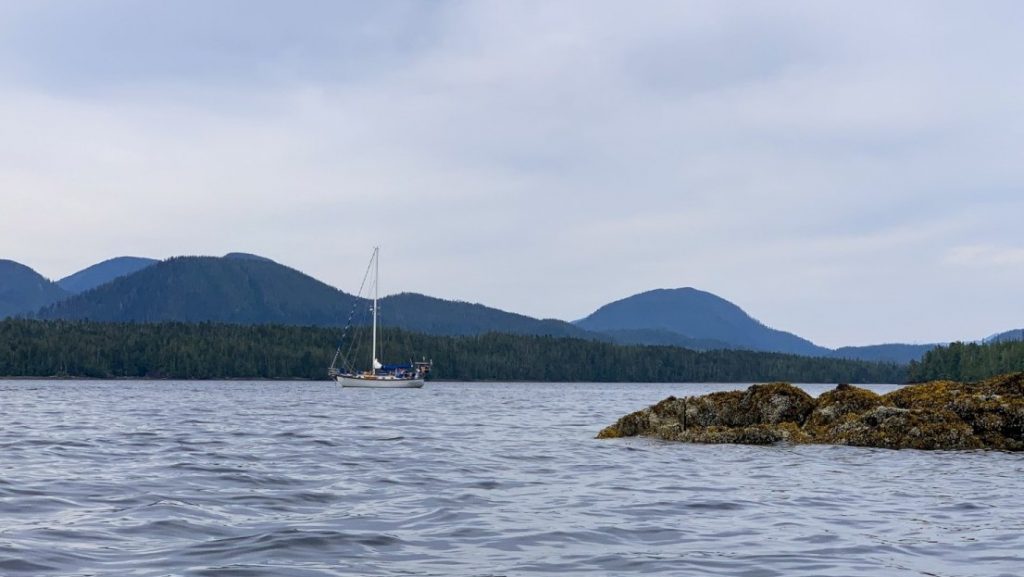 Laundry, groceries, showers, and a restaurant meal were all had, as is customary. During the course of said laundry, I found myself talking to a couple also performing the same task. We spoke of boating, sailing, routes, etc before asking each other’s names. It was only then that we recognized each other from social media. That night, after our restaurant meal, we were on their boat (a Tayana 37 – sister boat to Meriwether) enjoying desert, cocktails, and socializing with some great people. While solitude is always a highly sought after trait for any of our days, it does make good company that much more worthwhile when those days are on us. This was one of those days 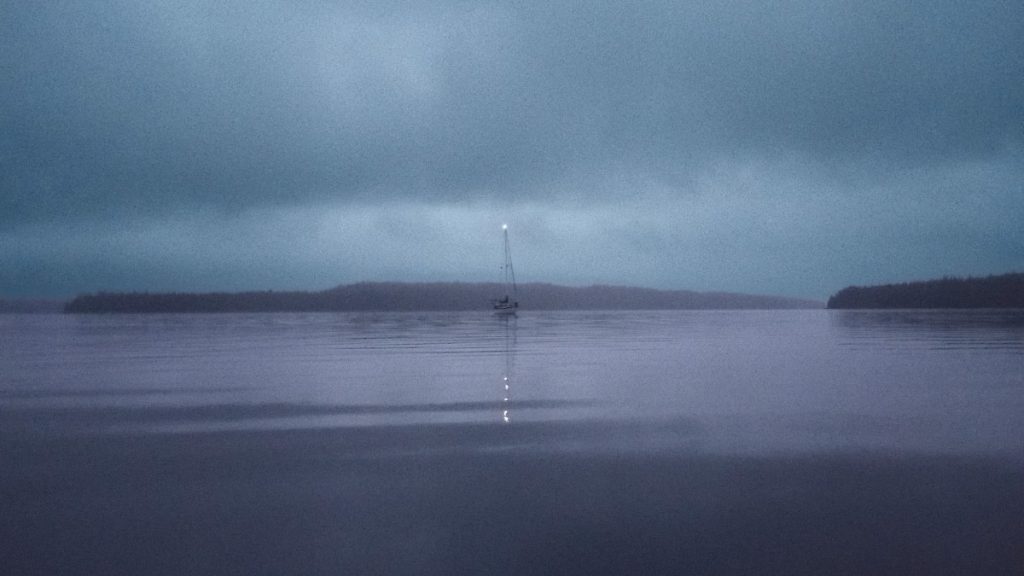