Where avalanches are born

The apex of our Alaska adventures was to anchor in a sliver of a bay, deep in glacial territory and well off the beaten path. Said anchorage is set in a Yosemite-like valley, with 3000 foot granite cliffs and 5000 foot peaks blocking the horizon in all directions. It is accessed only by navigating a very tight and shallow 90-degree turn named “Ford’s Terror”. Not only does the water move quickly in the constricted vein, icebergs are known to flow in and out at a brisk pace. 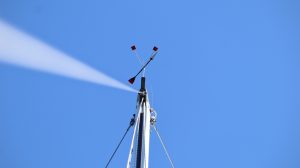 For us to even get there, we still had to make our way down Endecott Arm, right next door to our previous adventure in Tracy Arm. Both Arms have their own ‘gates’ to exit and enter, both with their own challenges though neither prevented us from moving forward. Once within the confines of Endecott Arm something happened that almost never happens to us – the wind was coming from behind us!

We had hours and hours to get to Ford’s Terror, where we wanted to arrive at high-slack, and not all that far to travel. So with the wind beckoning us, we unfurled the headsail and rode it in peace – the Perkins getting the day off – at a calm speed of 3 to 4 knots. Even at that pace we would arrive hours before the tide would allow us into Ford’s Terror. 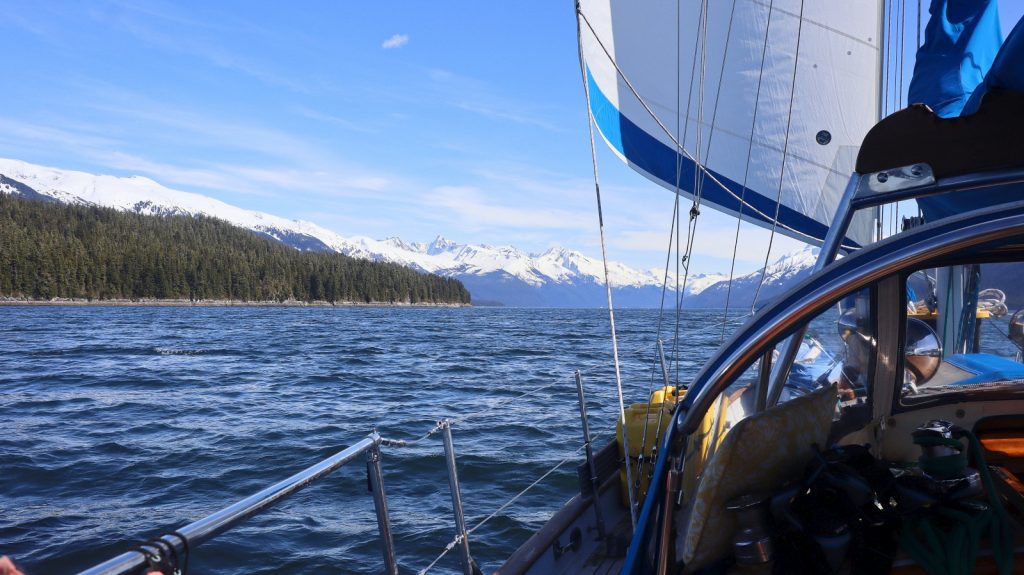 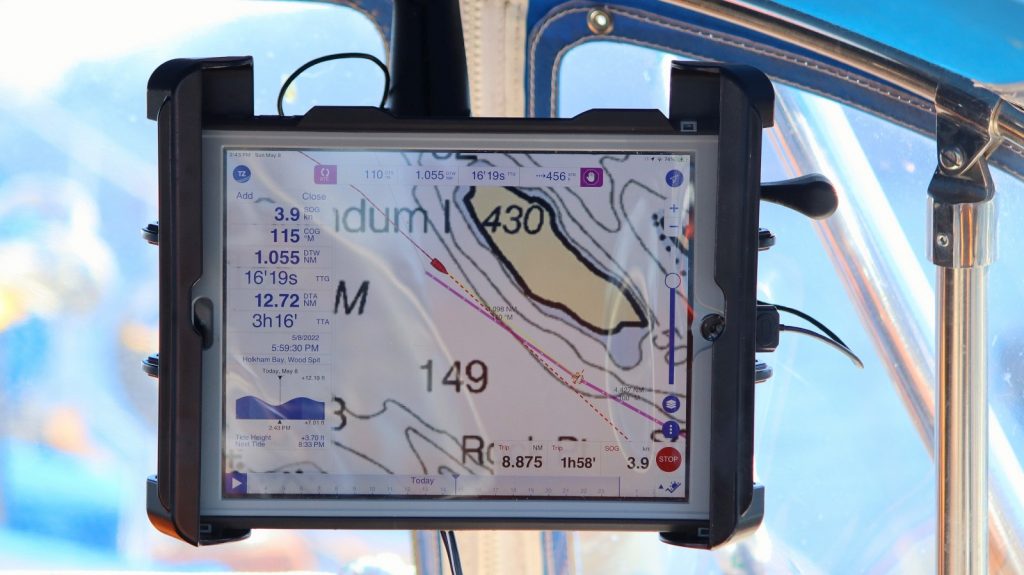 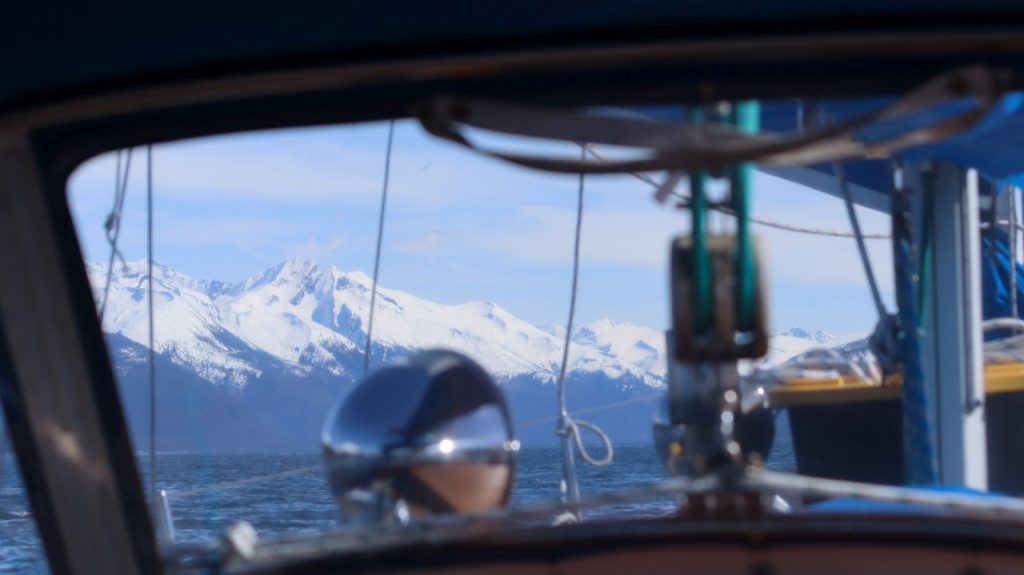 The sun was out, the wind was mild, and all was perfect as we made our way deeper into Endecott. Nearing half way some very large bergs began to show in the distance, some quite large – larger than Meriwether for sure. Kerri and I could not understand it but these bergs are moving out even though the current and wind were both flowing in. They simply defied mother nature. We would have to dodge a couple while under sail, adding to the adventure. I can’t imagine a time that I thought we would be sailing through icebergs. Just before turning into the tighter Fjord leading to Fords Terror we furled in the sail and were greeted by a humpback whale slapping the water with its tail. Not a bad day at sail. Not bad at all. 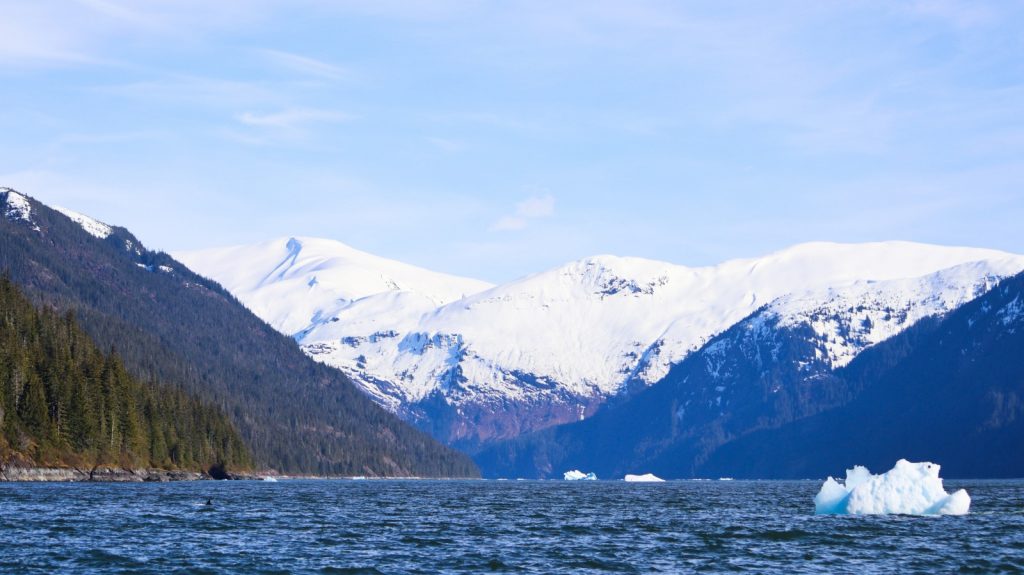 Look closely and you will see a dolphin in this image 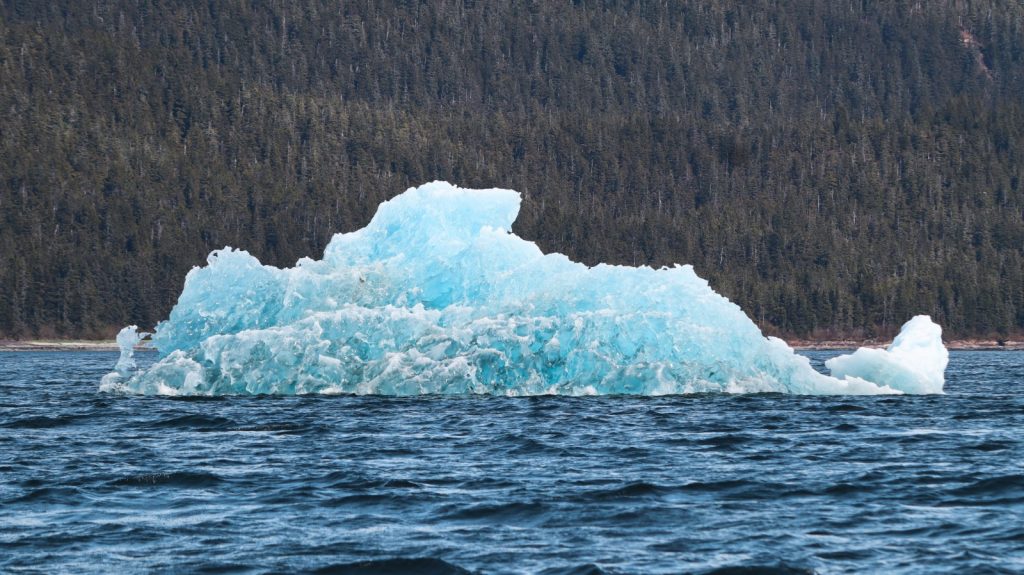 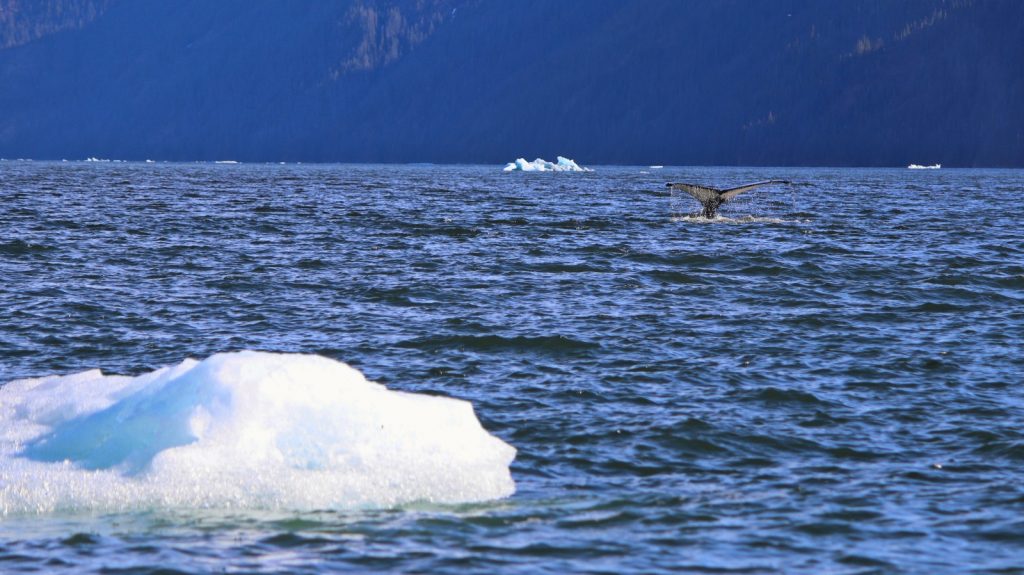 The final tail wave from the whale, who never resurfaced for us again 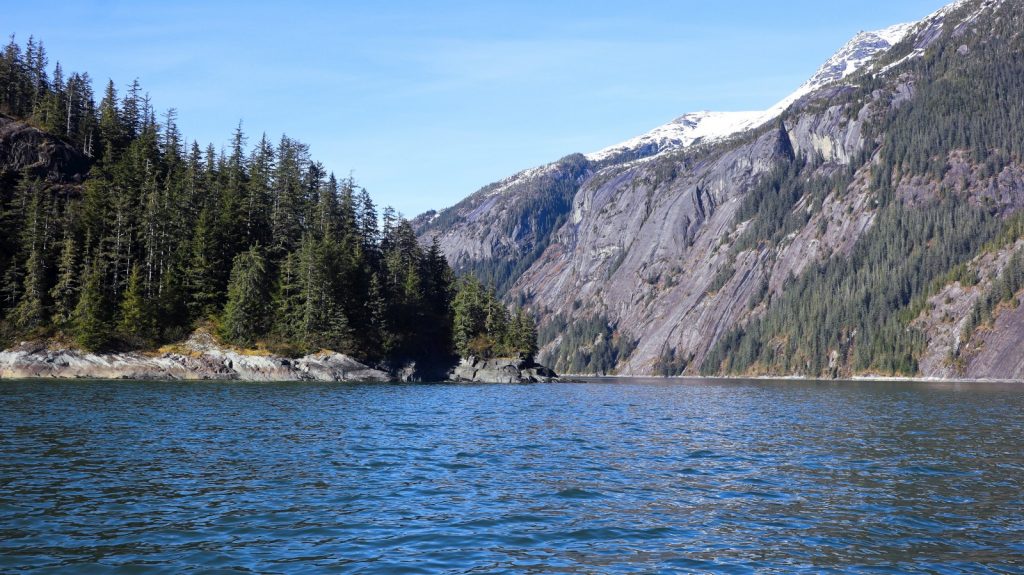 The last quarter-mile before Fords Terror

Just before Fords Terror proper, and since we arrived two hours before high tide, we pulled over the the side, as close to the granite wall as we felt comfortable, and dropped our anchor to wait. Not much of a risk of hitting the wall as the current (and wind) in these fjords always flows in and out, not sideways. We hung out on deck enjoying the view anyway, just to be safe.

Through binoculars we could see the small wave that forms at the mouth of of the rapids. After that the route turns 90 degrees to the right and behind the shoreline again, leaving it a complete unknown to us. We put our faith in the guide books, and when the tide rose enough, we held our breath and slowly motored through. The rapids were only a couple hundred feet long and thanks to it being high-slack, the waters were calm and easy to navigate. Depths only shallowed to 20-ish feet. Well within tolerance. 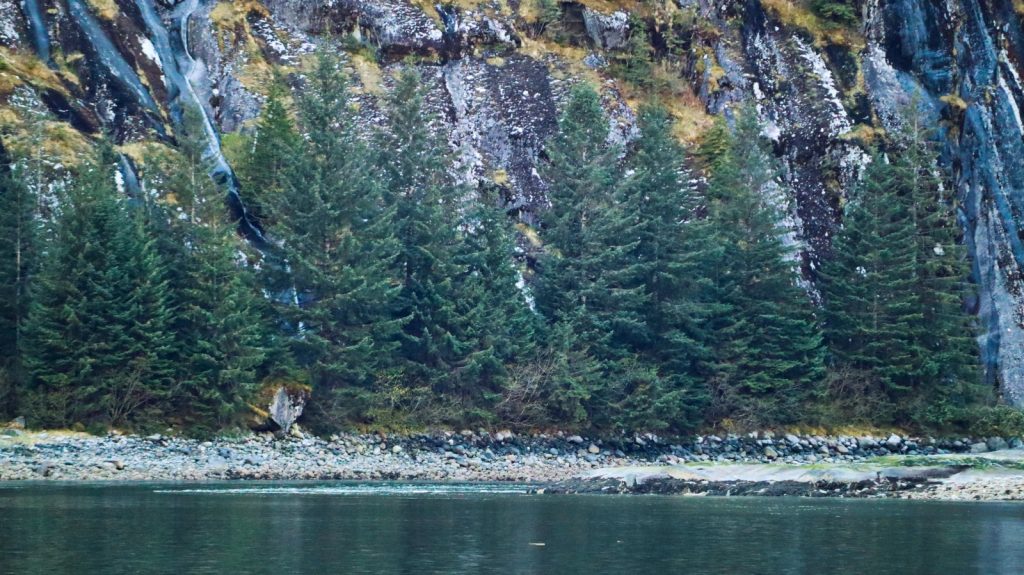 You can just see the white ripples of the current as it enters the rapids.

Once we made it through (achievement unlocked!) we entered a whole new world. A few more miles of steep valley walls on either side, lined with waterfalls as if Disney himself created this secret hideaway. An hour later, and just as it was getting dark, we arrived at our anchorage and only just begun to grasp how secluded we were. Not only are the mountains surrounding us too tall to get a radio signal in or out, but the rapids behind us would prevent anyone else from entering but for a few minutes every six hours. It was pretty much guaranteed we had this place to ourselves – which we did for the three days we stayed here. There is a smidge of fear being that far disconnected from the rest of the world. It conflicts with, and loses out to, my personal want to be as far away from people as possible. 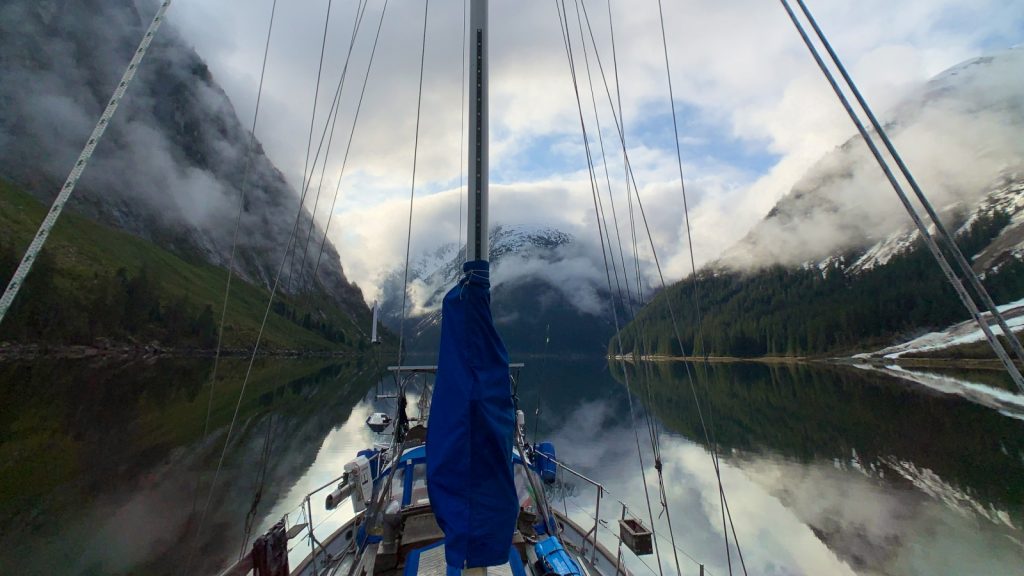 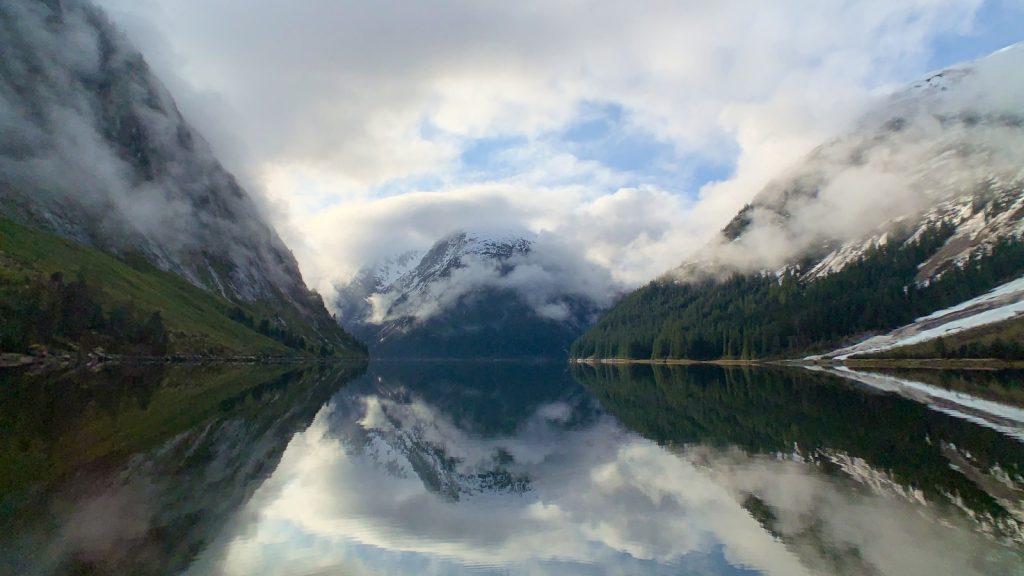 The weather was fairly foul for two of the three days. Winds really kicked up late the second night pushing us toward the center of the anchorage. This is normally what we would want, but we were anchored in 100 feet of water, with nearly all our ground tackle out, and being blown into deeper water. If the anchor didn’t hold, it would have nothing else to grab onto. At least there was also nothing to hit. A restless night ensued, but no further drama took place. Our trusty anchor did its job and kept us firmly planted through the night and into the morning, which we slept in late.

The one day of beautiful weather convinced us to get off the boat even though there wasn’t a whole lot to explore here. We went to the western shore to explore the rocks but the walking was too hard on the slippery rocks so we turned back. It was at this time that we heard a large rumble above us. Then the snap and crashes of large rocks hitting their neighbors. It sure sounded like we were directly under it, but the trees blocked out view. We survived, but left for the flat mud lands at the river outlet – the one with no large rocks on it. There we just walked around looking at the painting we were currently living in. The descriptive words we mustered were that of “unfathomable”, “inconceivable”, or just plain old “holy shit”.

A rare occurrence took place here; the complete and total lack of a single sign of any human life. Just about anywhere on the planet you see some sign of humans, mostly trash of some sort. But out here there was nothing – not even a footprint in the sand. The only signs of life – beside us – was a single set of bear prints an the sounds of birds. How’s that for solitude? 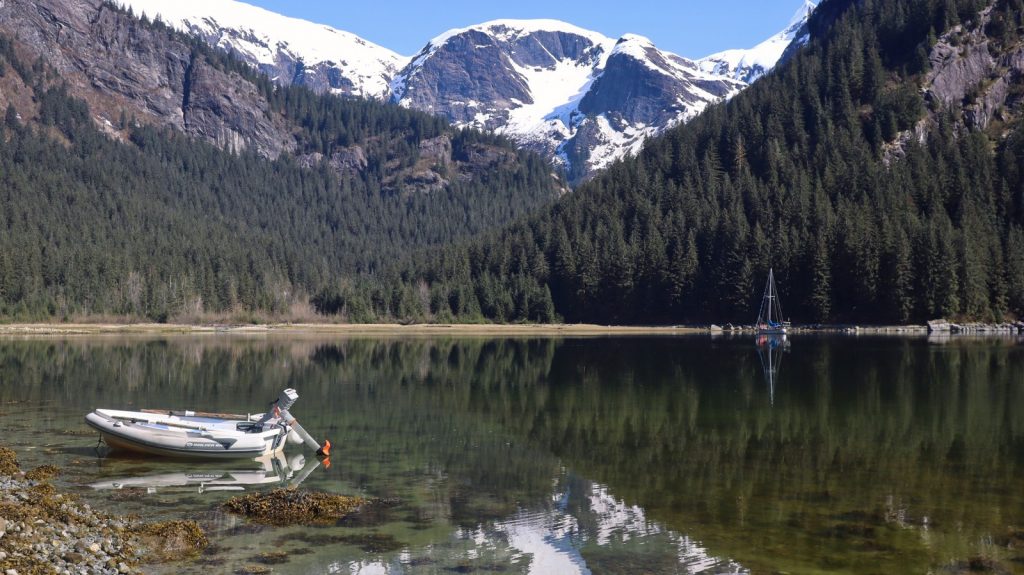 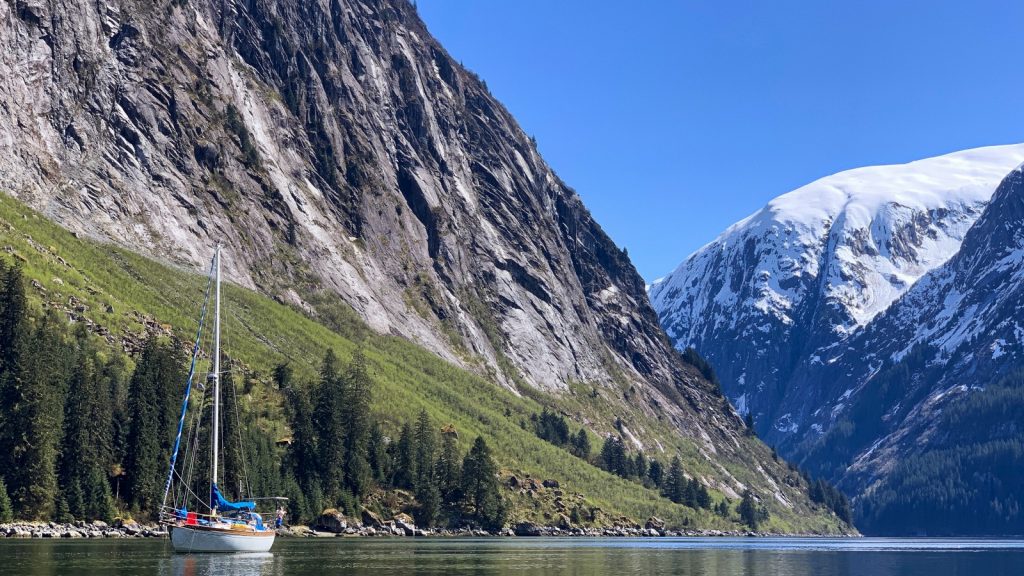 It was at this time that we heard it again. On that southern mountain (the one full of snow), an avalanche was taking place! The sound of thunder echoed through out our anchorage, snow slid down the steep rocky face, then it slowly came to an end. Kerri and I stood there in awe – neither of us had seen an avalanche in person before. We saw numerous more through the rest of our stay, but none could be photographed or filmed. Not only were we somewhat shocked with each one, unable to move, but the main thing was that they were a half-mile or more away… up. A half mile is more than a two-second delay in sound. By the time we heard it, the avalanche was well underway on it’s way way to its end. We stopped trying at all, and just enjoyed each one that took place – a dozen or more during our stay. 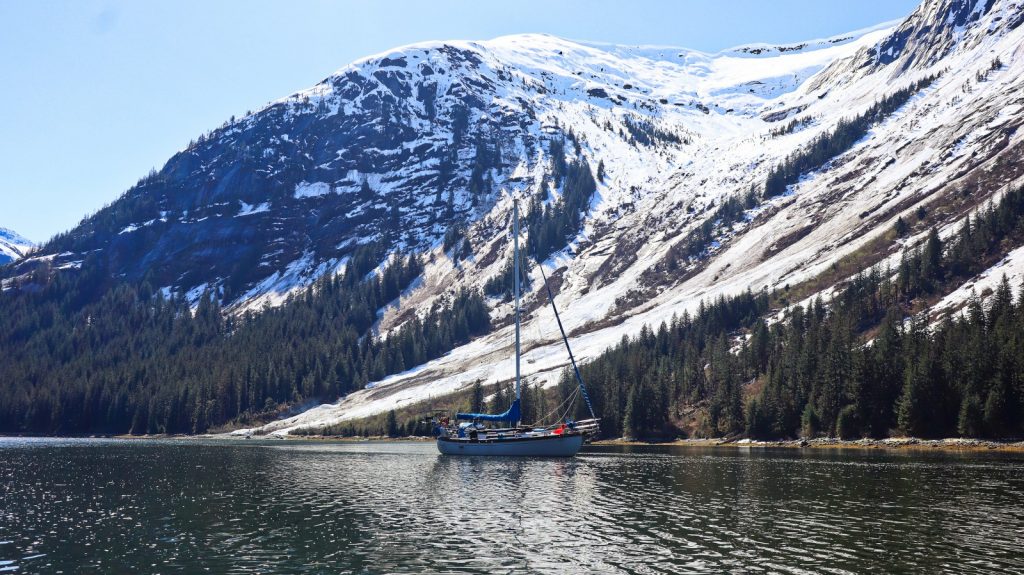 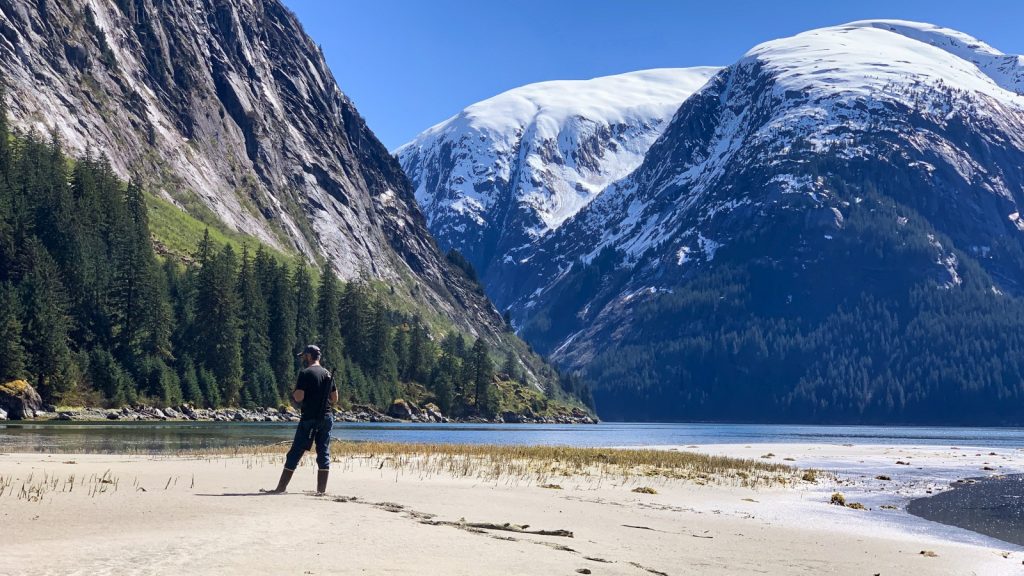 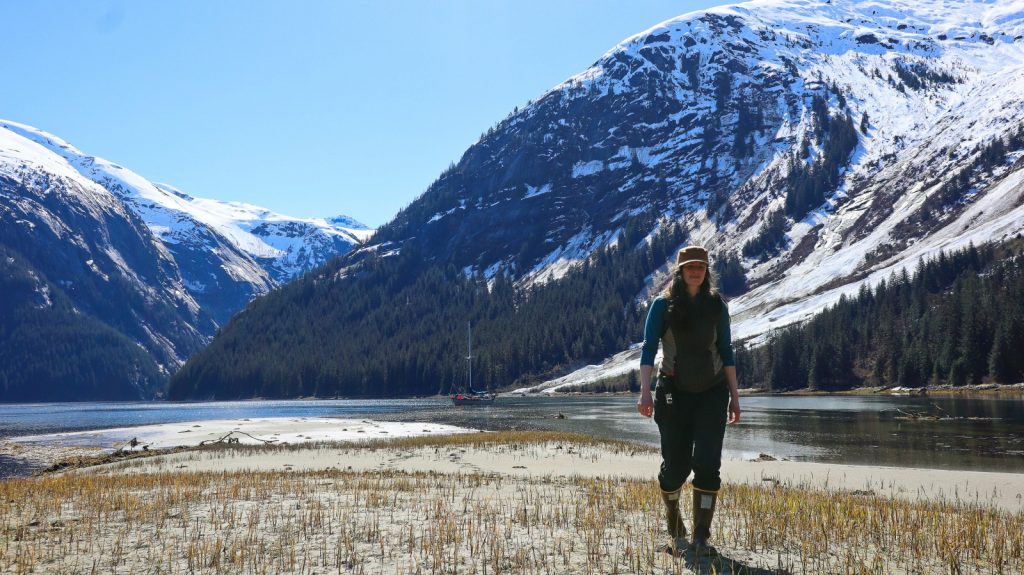