We know who to blame

We had a few day wait – thanks to weather – before we could safely round Cape Caution. The Cape is notorious for making mildly foul weather into a supremely big deal, not necessarily for the weather itself but for the state of the water it creates. Nevertheless, a good amount of wind was coming our way for a couple days, wo we just stayed hunkered down in the extremely well protected anchorage not aptly named – thankfully – Fly Basin. The weather stayed true, and wasn’t all that great. As it turns out, not a single photo was taken during our stay here. And with no internet we entertained ourselves using more “analog” means. 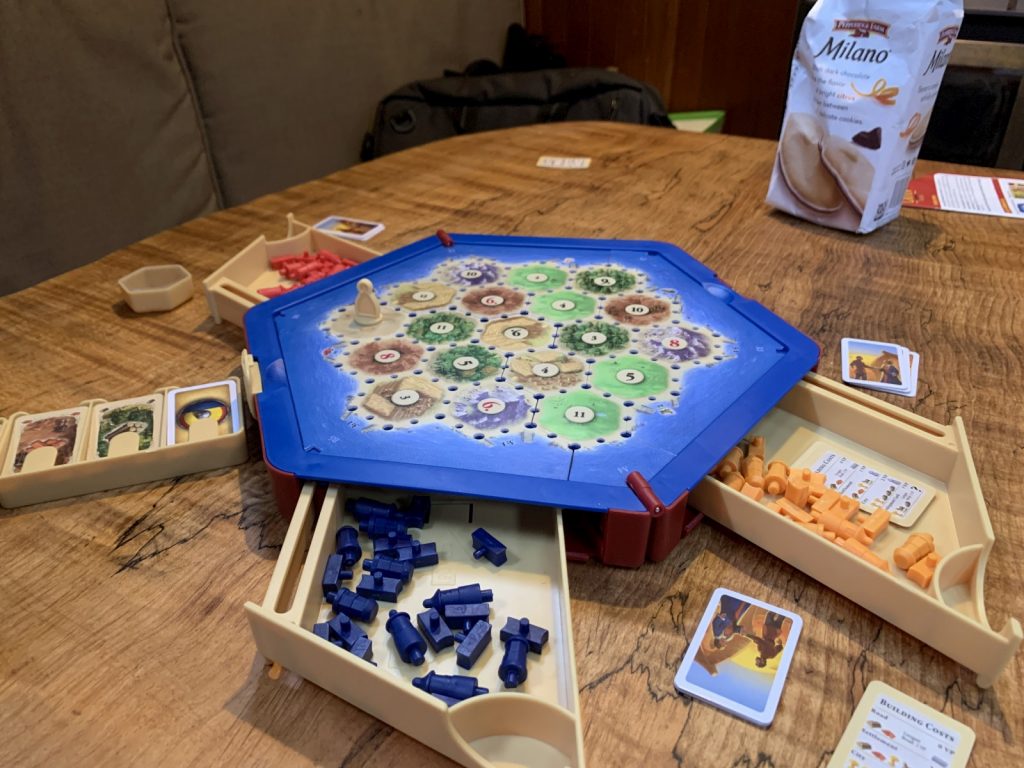 Our favorite board game as of late, Settlers of Catan, which we bought up in Alaska earlier this year. It has seen many-a-use since

Our final night before we could round Cape Caution I suggested we move to the tiny bay just before the Cape, saving us 90 minutes of movement the following day, which would already be a long day at sea. Kerri wasn’t fully onboard with it, but I persisted and we made the move. Jones Bay was small, very small. It was not the most protected either, especially when the charts kept me extremely confused on it’s depths, keeping me well outside it’s protection and into the surf of the open waters to our north-west. The rocks kept us protected, until the tide rose enough that the waves were breaking over the rocks. We had already raised anchor once, after our initial anchoring and now we were doing it again to move further in the bay with more water under out hull. Kerri made sure we both knew who was to blame for the mess. A blame I accept. 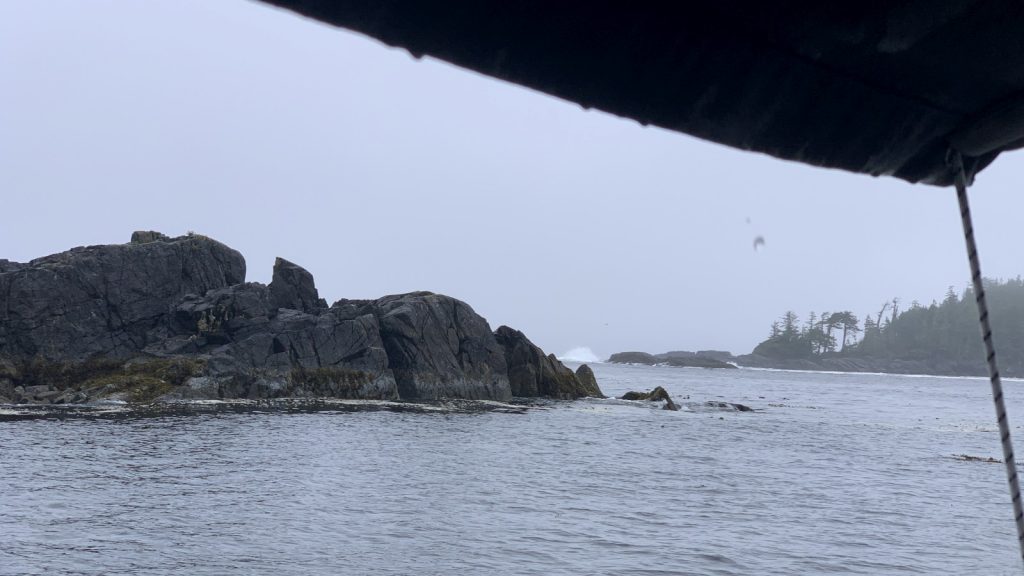 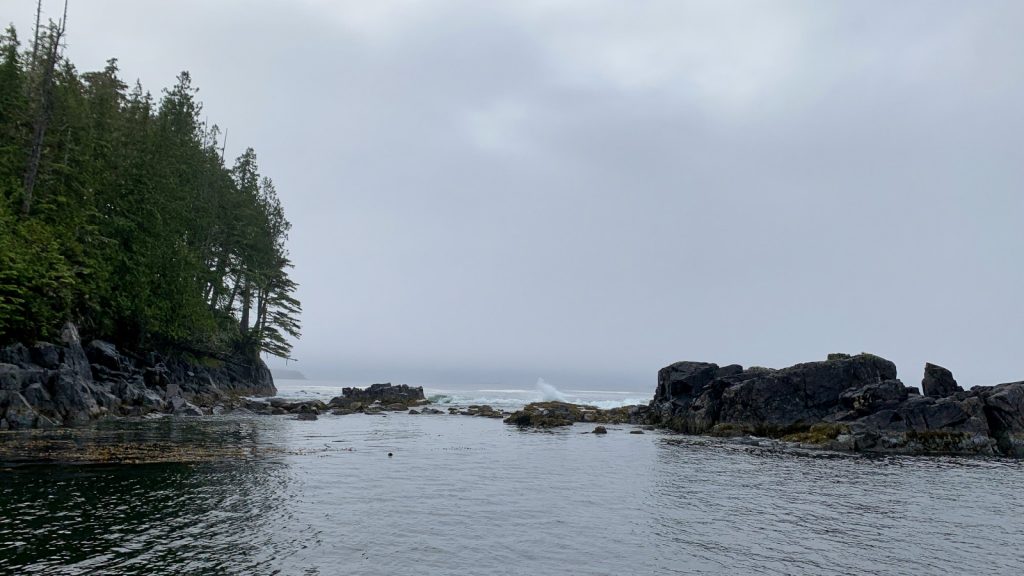 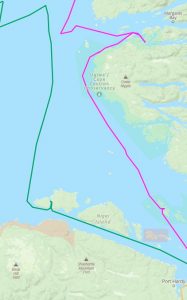 On our way up last year (green line in image) we didn’t pass by Cape Caution, we stayed well off it’s point and in deeper water as we sailed past. This time around (purple line) we would pass within a mile of the point of land jutting out into Queen Charlotte Sound. With a 6am departure we would have both the current and tie on or side. Not long after us setting out we were rounding the cape, in waters that were still a bit rolly from the past day’s blow, though we had no wind to sail with. All was safe however and drama free, which was a win.

T’was only the last 90 minutes of our day that we got to shut the motor down and get some sailing in. Still, there was only a tiny breeze, but the current was pulling us along at an additional 2 knots of speed, so we were actually moving over ground at a fair enough speed of 4+ knots on just the headsail. Our destination was a group of islands, known as Walker Group, in the middle of the sound. There we rested for the night, and set out in the early hours again to make the final short hop into Beaver Harbour of the largest island we have been near in a year; Vancouver Island.

Although still technically an island, Vancouver felt very mainland-like. It included our first real internet signal in what felt like weeks. Though it came with a big caveat (Canada roaming is not really all that great) we stayed put for another few days to get caught up on work and life, and even an evening cocktail on the beach watching Meriwether bob around at anchor. 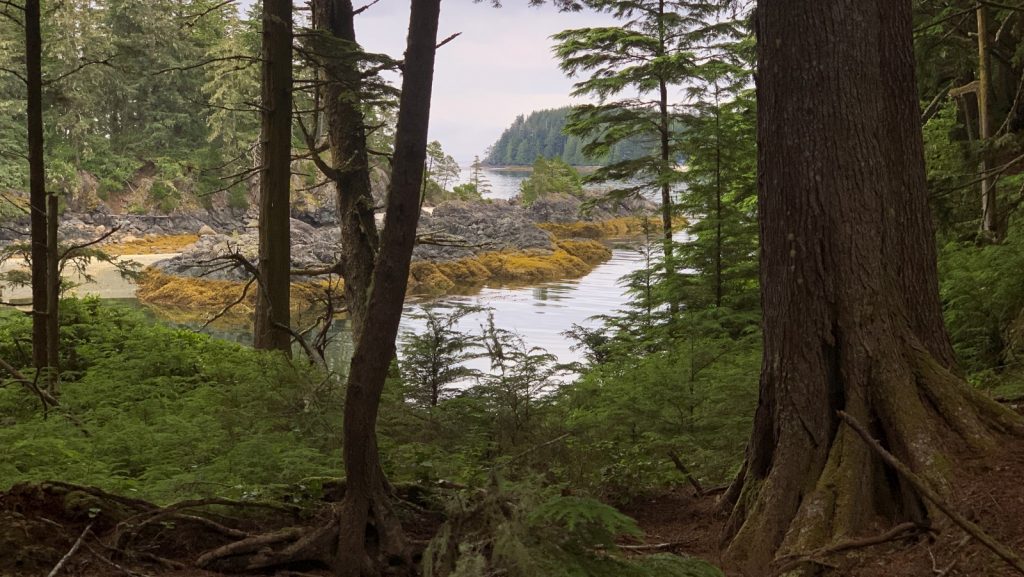 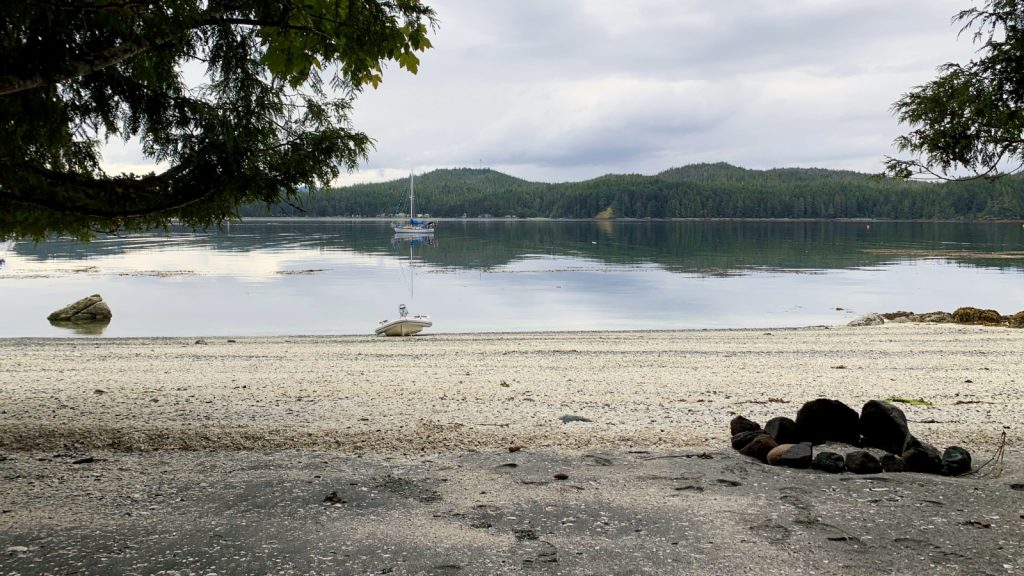 It felt good to be near Vancouver Island. The northern tip marks our half way point through Canada. Roughly another 300 or so miles to go before we haul out in Port Townsend for a few repairs before the long trip down the west coast towards Mexico. We have had to sort of rip through the northern half to have any time to spend in the Boughton Islands and Desolation Sound areas, both are well known as being fantastic places to see. But that is for another blog post.