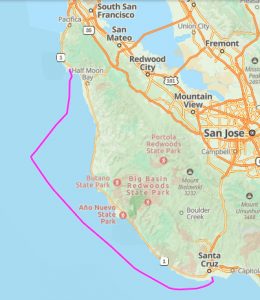 Before the sun-rise. That was our time of departure out of Halfmoon Bay. We had a full day of sailing to get to our next destination of Santa Cruz with no where to stop in between. Sixty-ish miles separated the anchorages, and with a lot less daylight in each day this late in the year it was a squeeze to arrive before sunset, which we did – just. I am pleased to report that we even got to sail some of the miles, which has still been quite rare since leaving the Washington – although not PNW-rare.

We arrived just before sunset as planned, under sail and weaving our way between that evening’s charter boats packed full of passengers paying for a sunset sail. The anchorage lay directly beside the long pier extending out into the water, full of gift shops and restaurants. Spot chosen and hook dropped, we settled into a calm evening of celebratory cocktails as the ocean swell tried to topple the boat. In the not-so-far-distance, under the pier, lay a hundred or so sea lions “resting” for the night. Resting does seem to entail a whole lot of grunting, snorting, and screaming though. It is not a quiet place to be, no matter the hour of day. 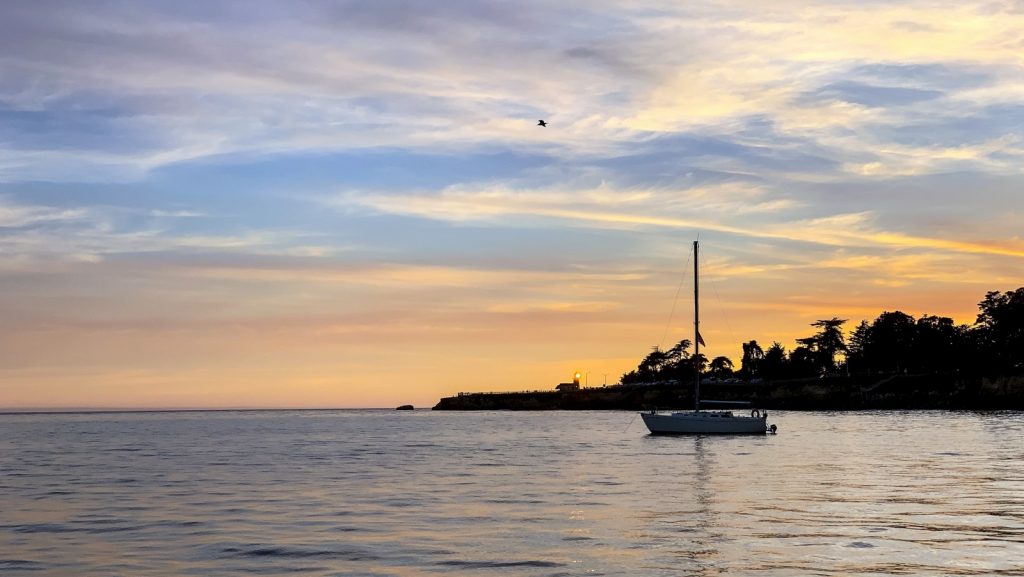 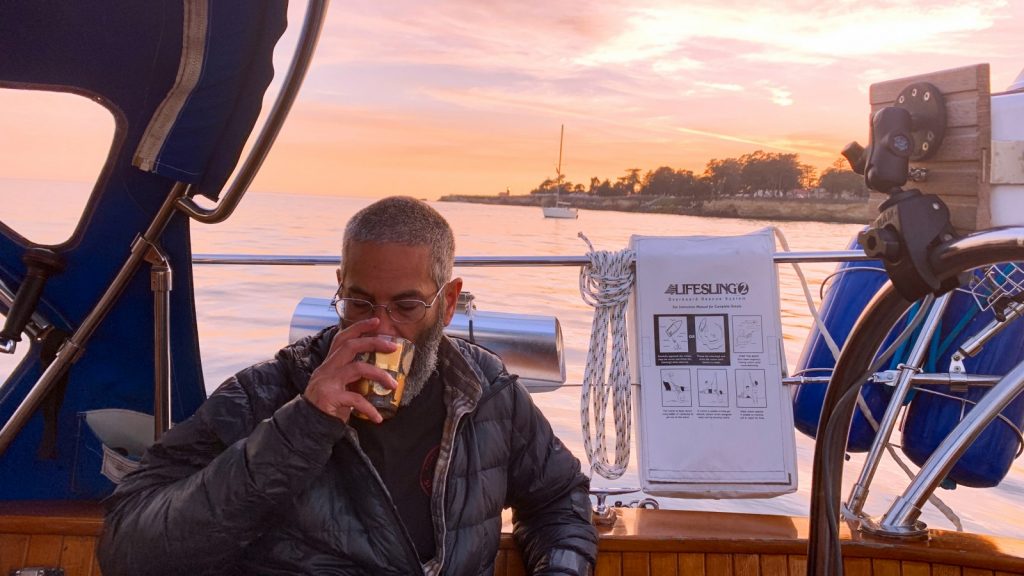 The following morning we set out in the dinghy to find a place to get ashore. The beach itself had small breakers, but large enough to have meant disaster if we tried to land the dinghy on the beach. So, off to the nearest marina where we tied up, and set about walking the one mile back to the boardwalk area where we were anchored. We walked to the end of the pier to view the sea lions snorting below and revisited some younger-life memories of the Santa Cruz Boardwalk. Kerri humored me a I bought some salt water taffy – because that is what you do here – and the obligatory corndog. By this time –  a mere hour after it opened – the boardwalk had gotten too crowded, so we returned to the boat and I promptly sugar-crashed my way into a 3-hour nap. 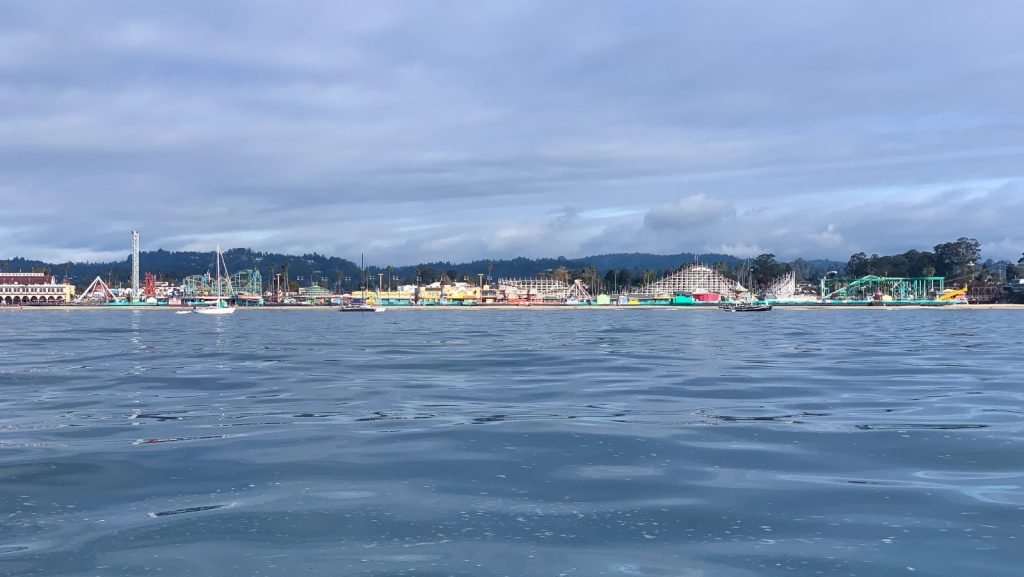 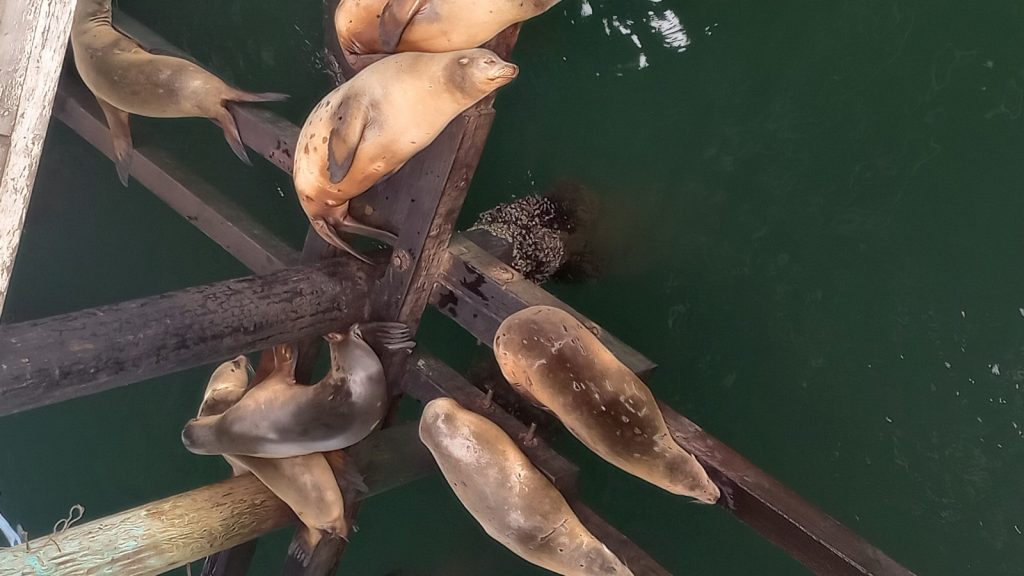 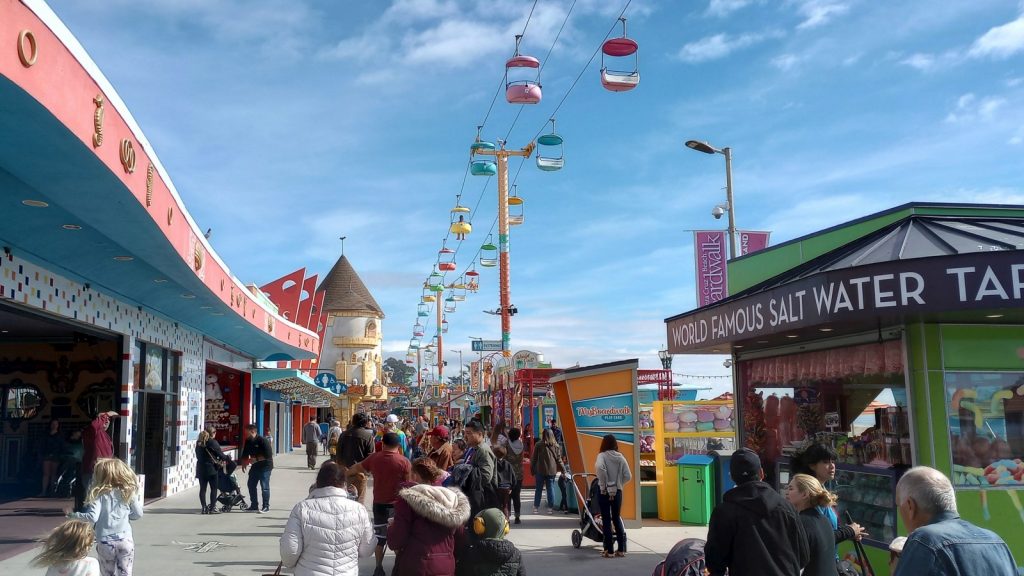 Unable to tolerate the extreme rolling of the anchorage any longer, we left the following morning with our bow pointed straight at Monterey, just 20-something miles to our south. We didn’t have to motor more then a few minutes before the sails were hauled out to meet the sun and wind. And for the next four hours we sailed – with the wind on our beam. It was truly a beautiful day on the water. This is only the second time in all our sailing days having the wind on our beam for any period of time. Meriwether, and her crew, really-really likes sailing with the wind on the beam.

Our time in Monterey lasted a full week. We spent a few days in the marina, then anchored out for a few, only to return for one final night on the docks as my two younger brothers (and wives) were coming out to visit. We couldn’t shuttle them – one at a time – in our dinghy, so it made sense to come to shore for one final night. We had a good time chatting, and laughing, the day away. 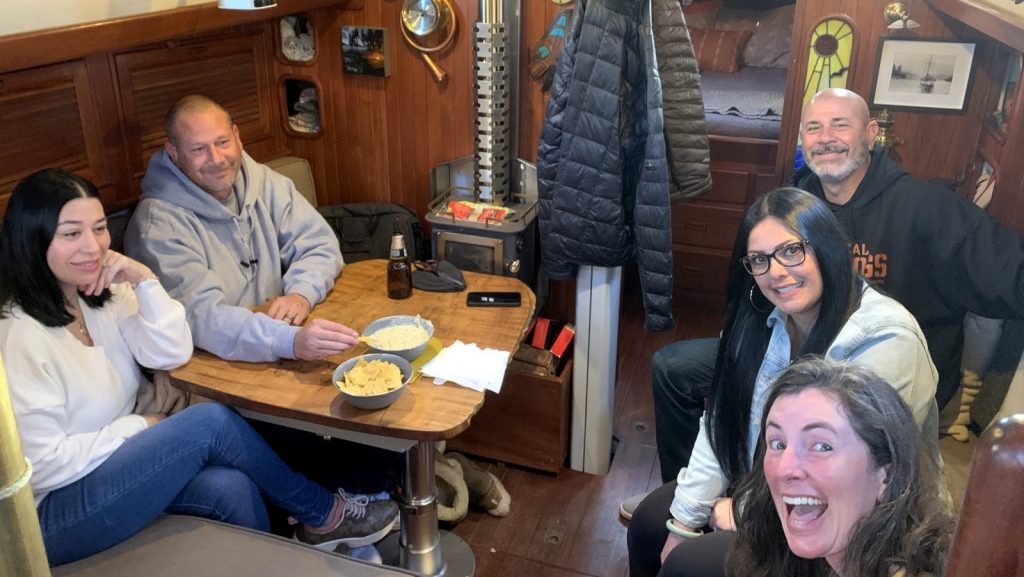 Kerri tricked me into a few walks, longer then advertised a usual, and we visited numerous restaurants and pubs through out the week. Otherwise, we just focused on getting some work, and laundry, done while we had the time and facilities. As i customary, we fail to photograph much of our lives when at dock.

When I updated my spreadsheet a few days later I noticed we had hit a particular benchmark I have been watching for – 365 nights at anchor. Yep, good old Meriwether and her crew has spent an entire year at anchor since our first sails together back in 2019. 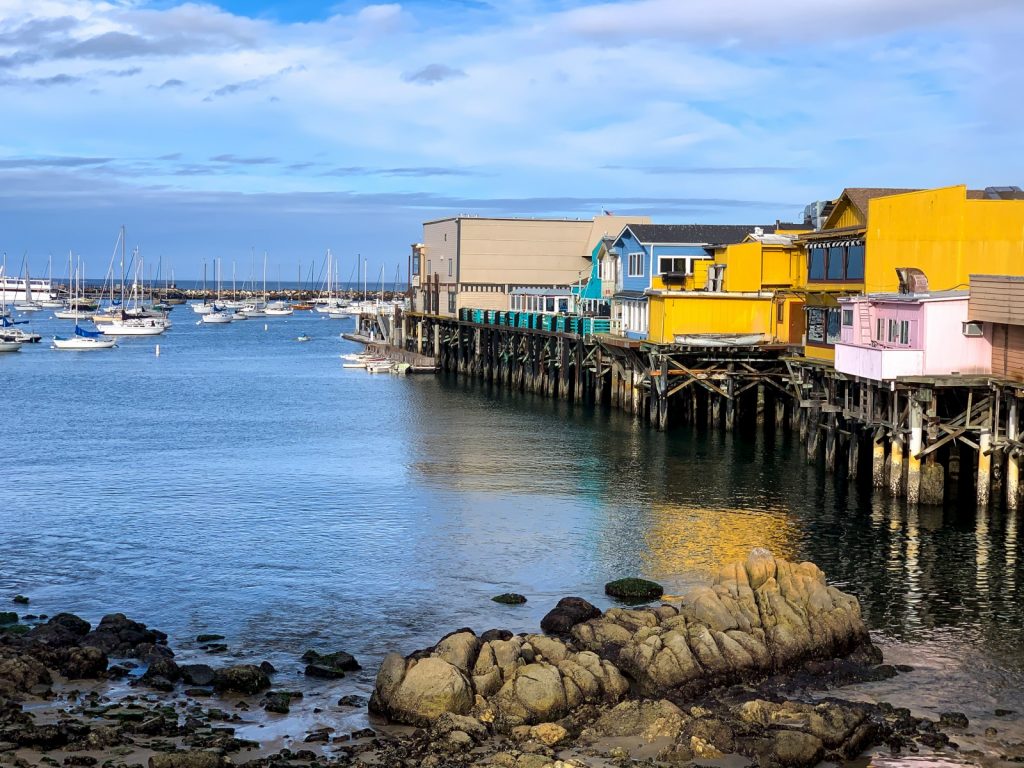 So many places down this coastline I’ve been to so many times before. But approaching them by water instead of wheels is a fully new experience. Sometimes, it’s a lesser experience, as no vehicle can really limit access. But I’ve never really appreciated Monterey as much as I have this visit. Being right there in the marina district, with great walking trails, not having the stress of hunting and paying for parking, walking to Trader Joe’s, a different route past historic homes and businesses each time, gave me a whole new appreciation for this town. Two of Tim’s brothers live nearby, so we had a chance to see them and meet an awesome new member of the family. And of course, more clam chowder for me. (No, we didn’t go to the aquarium this time. It’s $50pp, and we’ve been before. But I really miss getting a hit of that jellyfish room). We chose to stay in a slip as opposed to at anchor for about half of our stay (while anchored out, the only public dinghy dock is way too sketchy for our dinghy—it’s the sea lion’s favorite place to hang out in the evenings). – Kerri