Where waterfalls are born 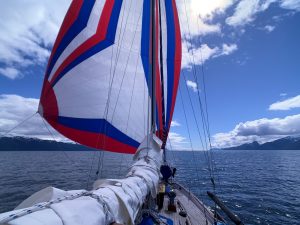 When talking to others about us spending a few sailing seasons in Alaska, one location came up as a “must see”, from those that have been to Alaska, more often than any other; Tracy Arm. It is difficult to accept that a single spot could be the defining locale for all of South East Alaska, but that was the ticket being sold. Tracy Arm is a short power-boat ride from Juneau, with regular tours being offered to anyone wanting a small Alaskan adventure. For us, it involved another long day on the water, this time mostly motoring. We did have a perfect tail-wind to go through the near-herculean effort of rigging up and hoisting the spinnaker sail, which we did only for the wind-gods to snicker at us as the breeze fell to exactly zero within minutes. It was good to bring out the big sail nonetheless, at the very least to stretch its muscles after the long freeze of winter.

Sail down and re-packed, along with a few more hours of the old Perkins rumbling away, we arrived at the tight entry to Tracy arm. Cruise ships come in here, yet the entry seemed barely wide enough for Meriwether. Get it wrong and we run a-rock. Get it right – with the current in our favor – and we shoot out the other end like a cannon. Cannon it was. We were officially in Tracy Arm… but the day was only half done. 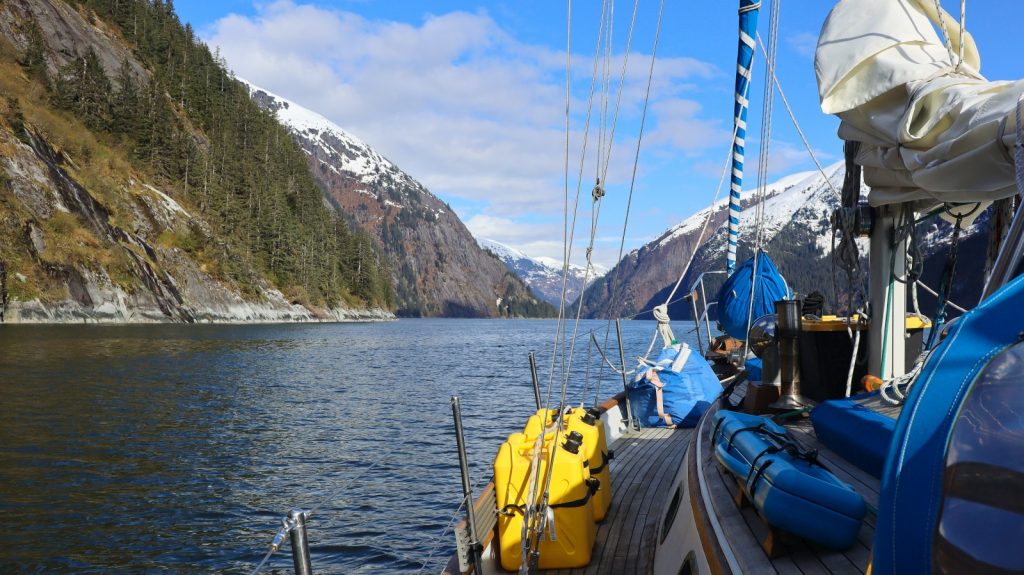 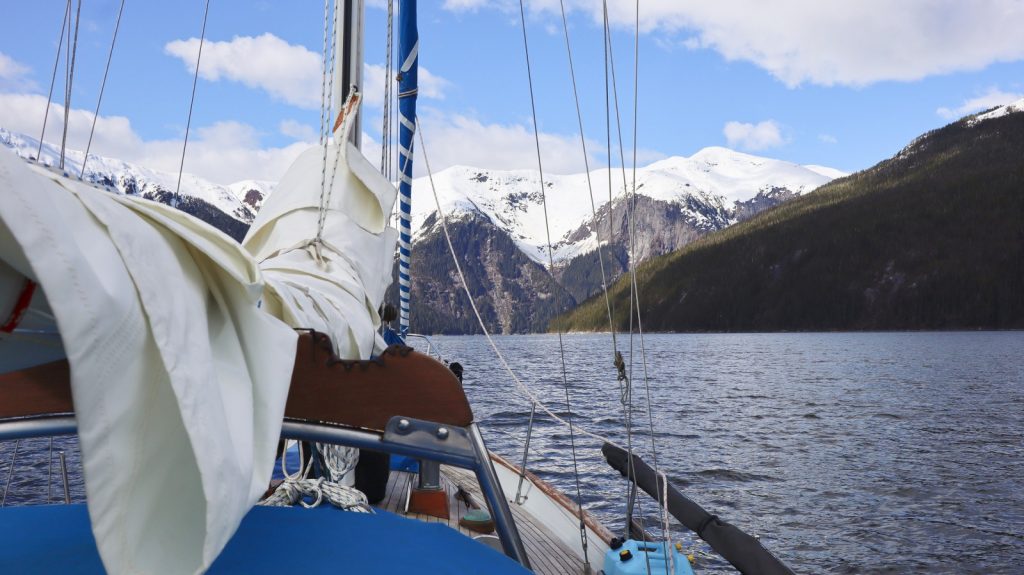 It took another hour and a half motoring to get far enough up the arm to start earning our reward of seeing what Tracy Arm is all about; waterfalls. The boredom of a day’s motoring was replaced with awe as 3000 foot rock cliffs on either side of the fjord give birth to another tall fall every few hundred yards. Waterfalls of every size and configuration imaginable – from tall veils to rushing monsters, they were everywhere. One’s neck would begin to ache spending more than a few minutes in here – it is impossible to go back to what ever mundane task you were doing before – as looking up was a necessity no matter how unnatural a posture it is. The human eyes are great at what they do, but taking in so much grandeur is not their forte. The eyes require rescanning each view dozens of times to accept it as reality. Once accepted, the eyes would move a few degrees to yet another outlandish scene, restarting the whole process. This we did for some unmeasurable amount of time – time stood still with an awe-high pumping through our veins. 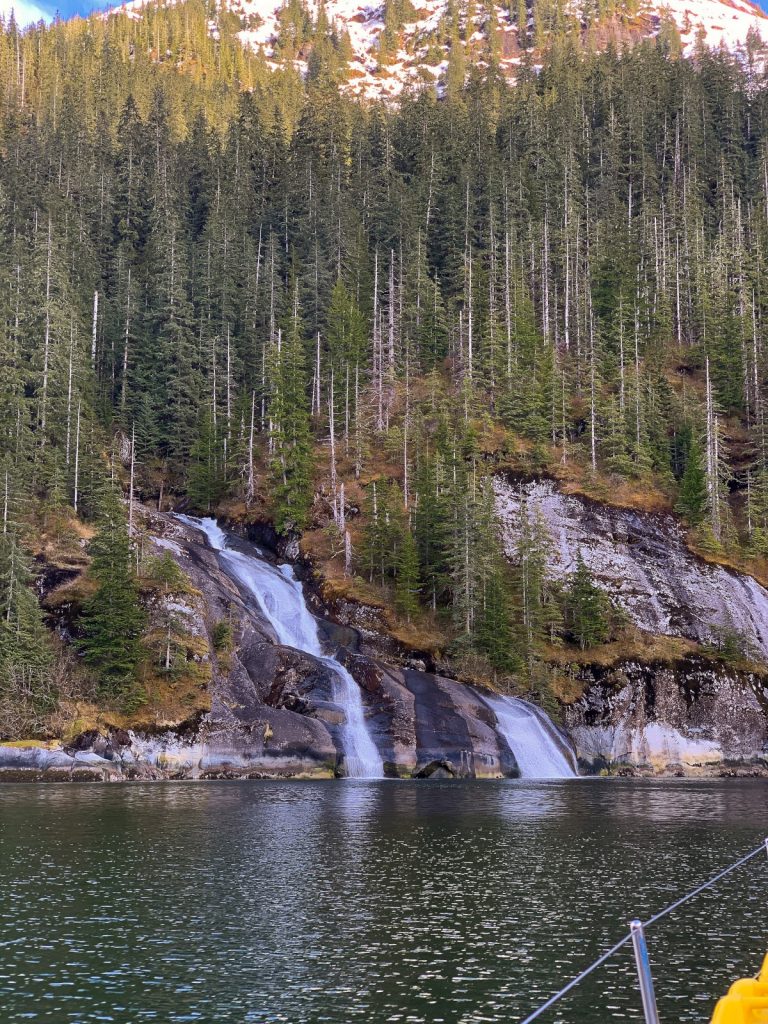 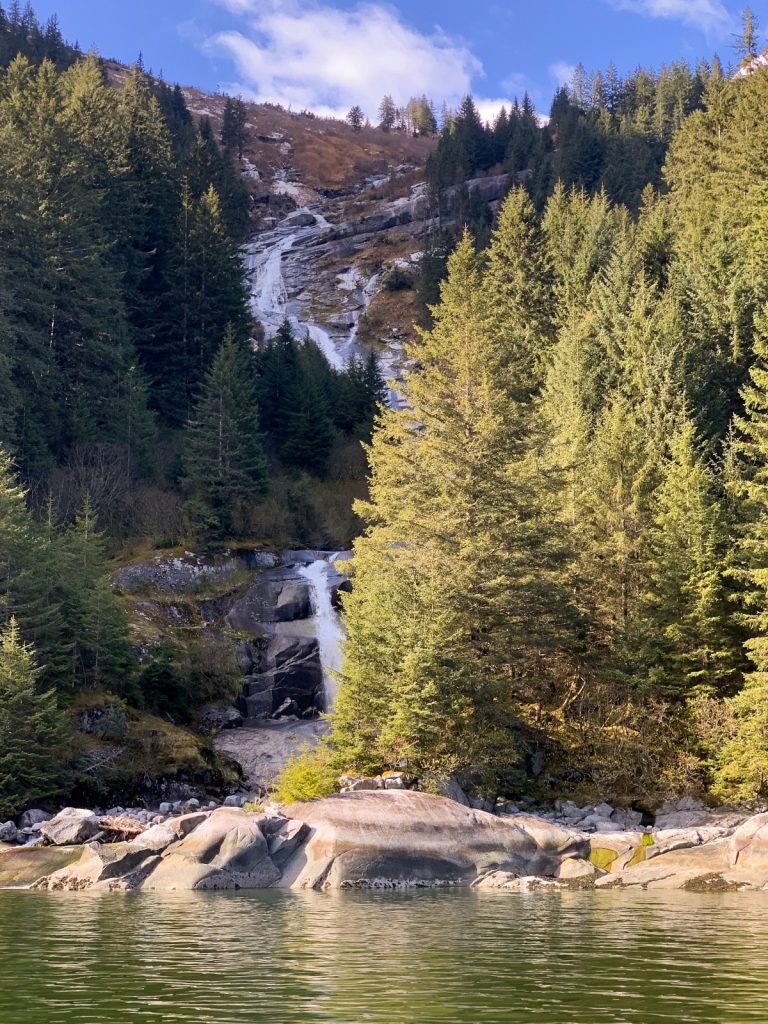 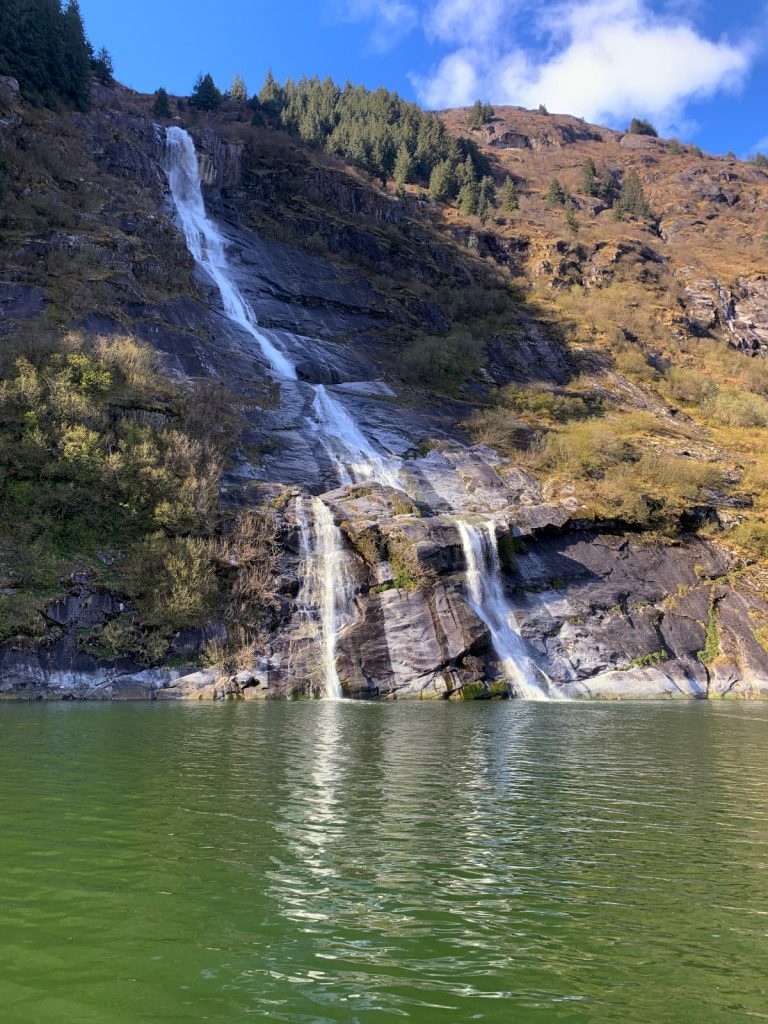 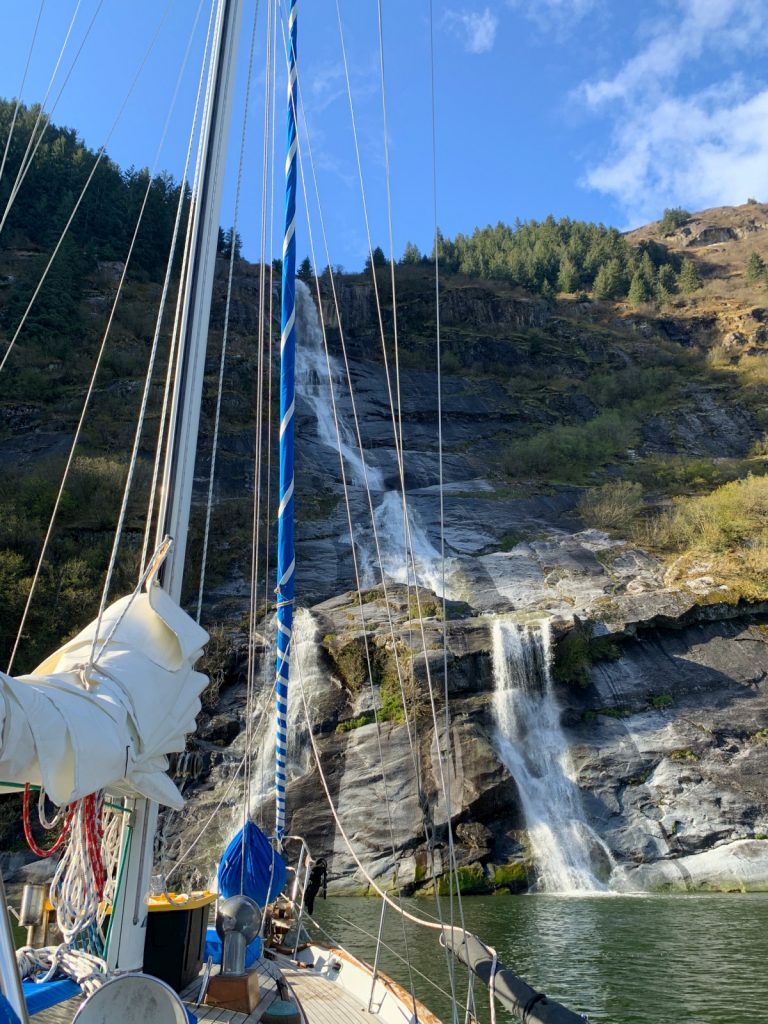 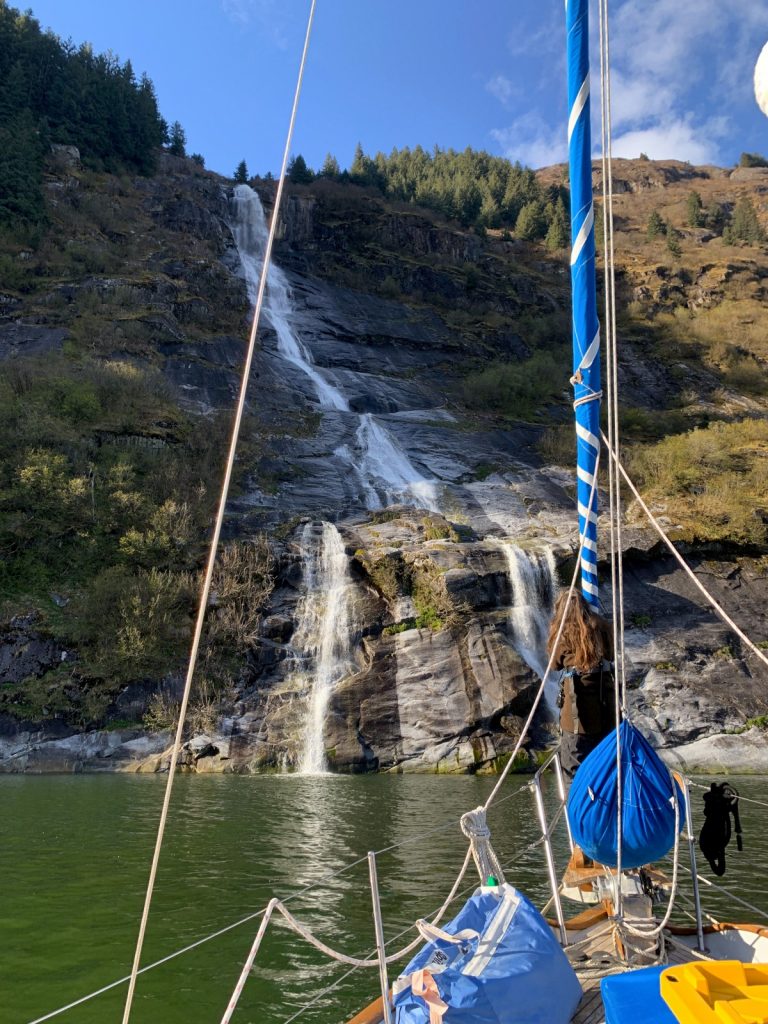 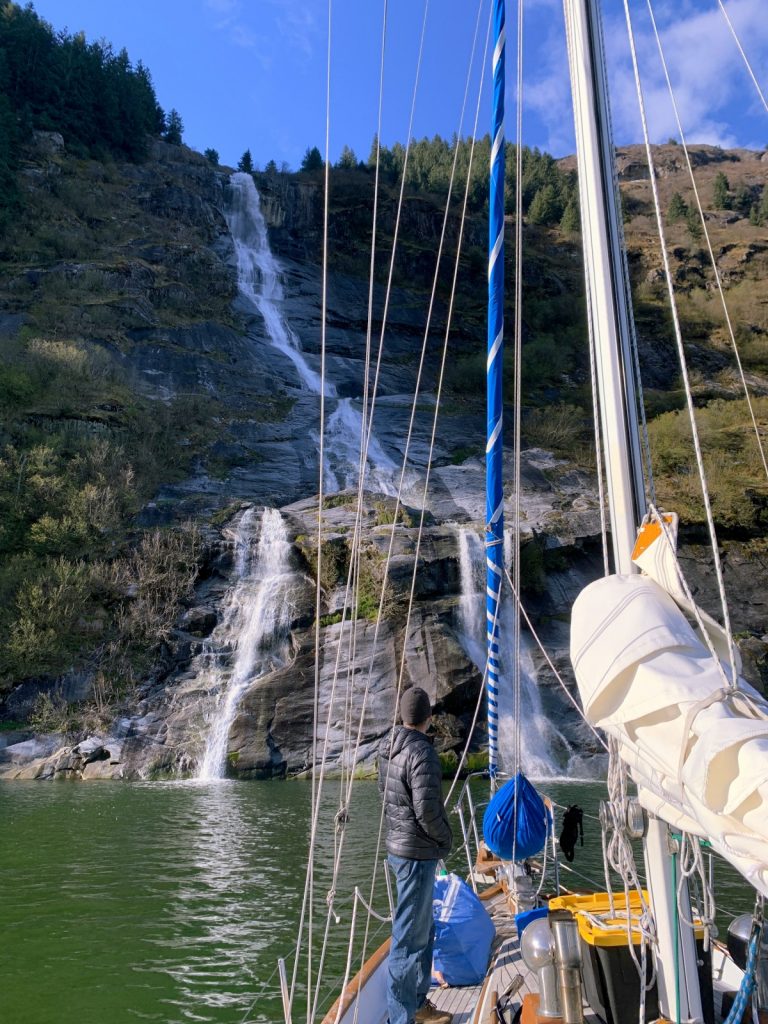 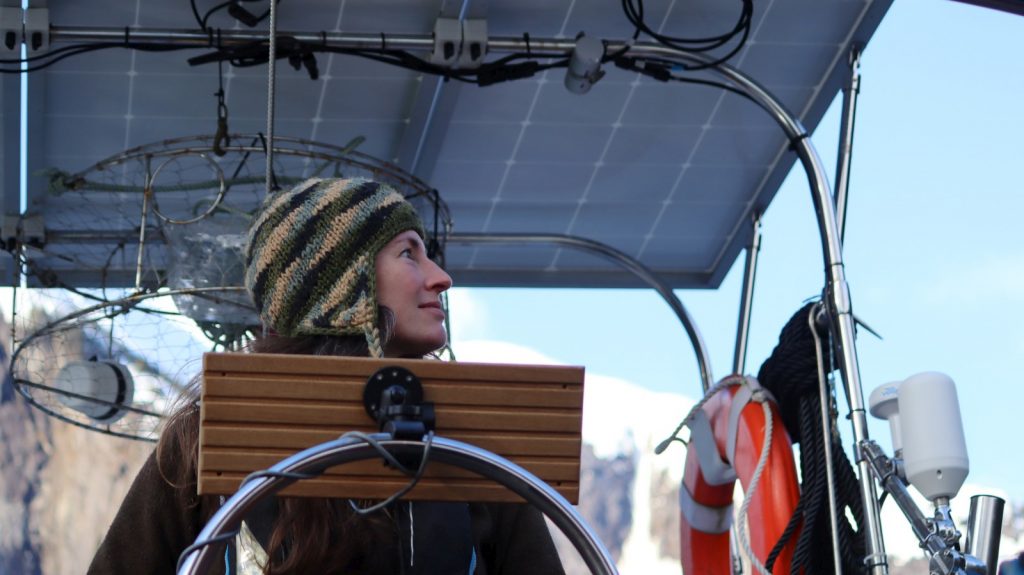 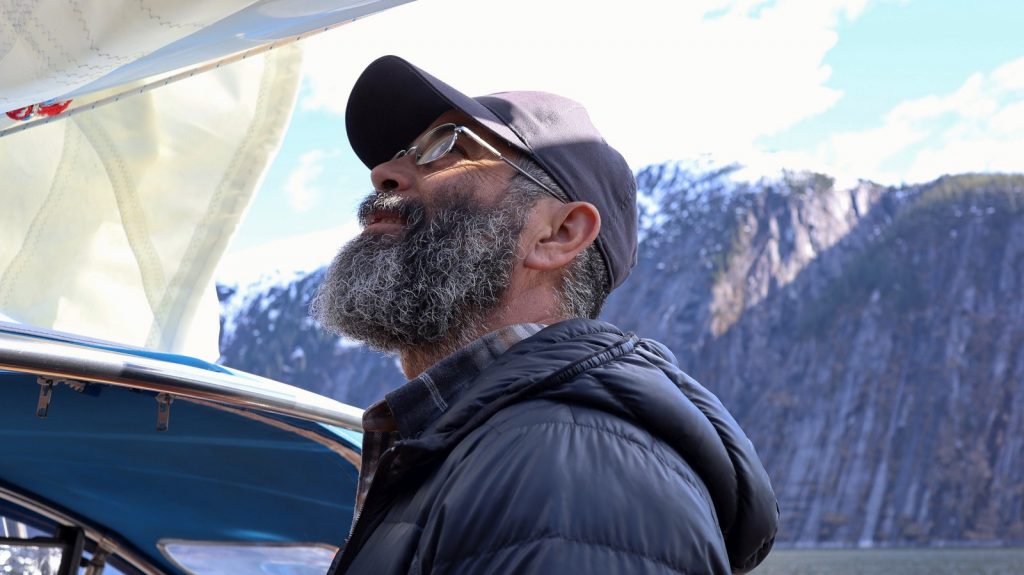 We would only traverse the first few miles of Tracy Arm, hopping from one waterfall to another as we progressed in. The late afternoon sun and the inability to anchor anywhere within Meriwether’s reach prevent us from navigating the arm’s entirety. At the end would be glacier. Glaciers actually; Sawyer and South Sawyer Glaciers were another full day’s travel down the fjord, but we simply did not have enough time. 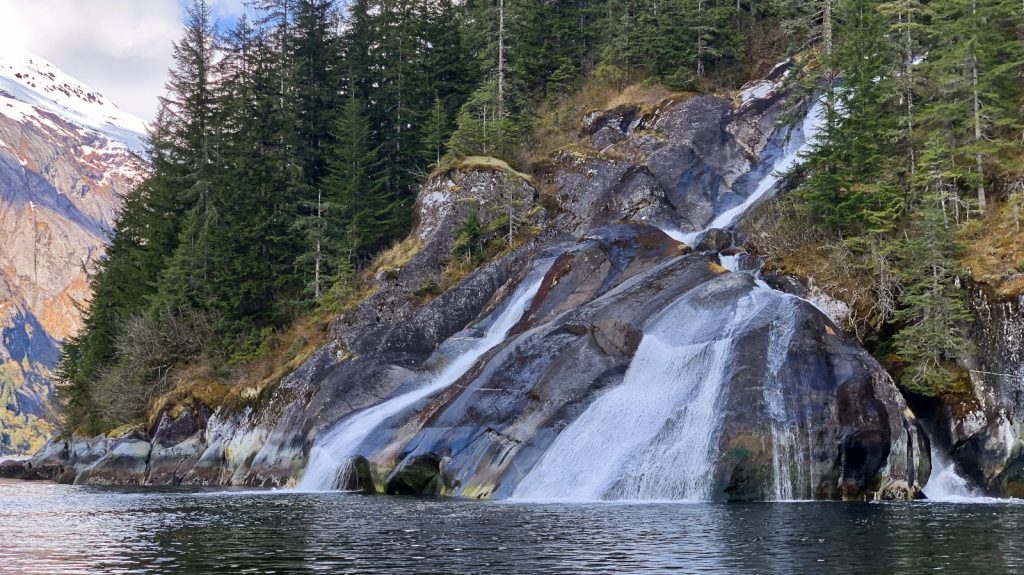 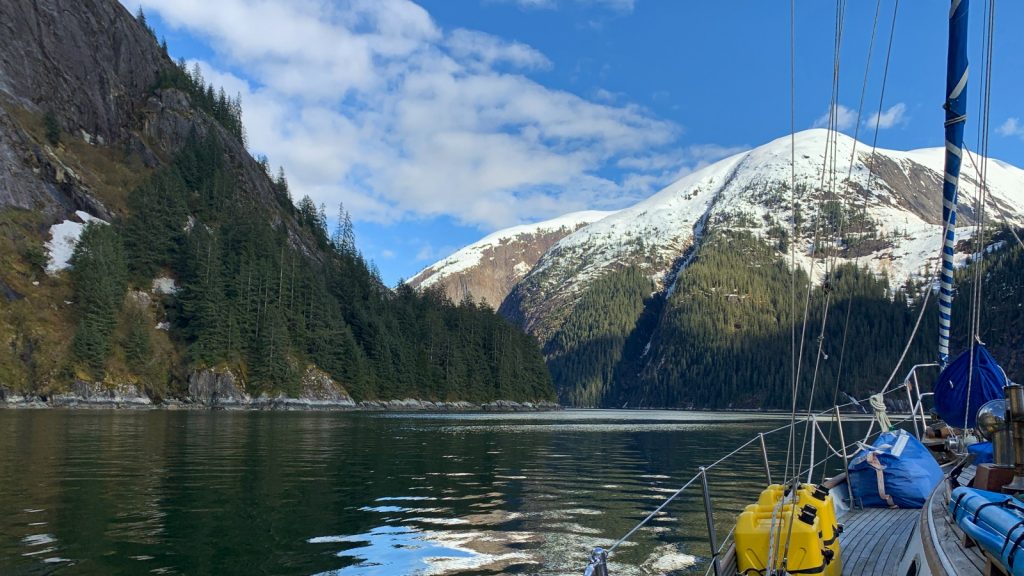 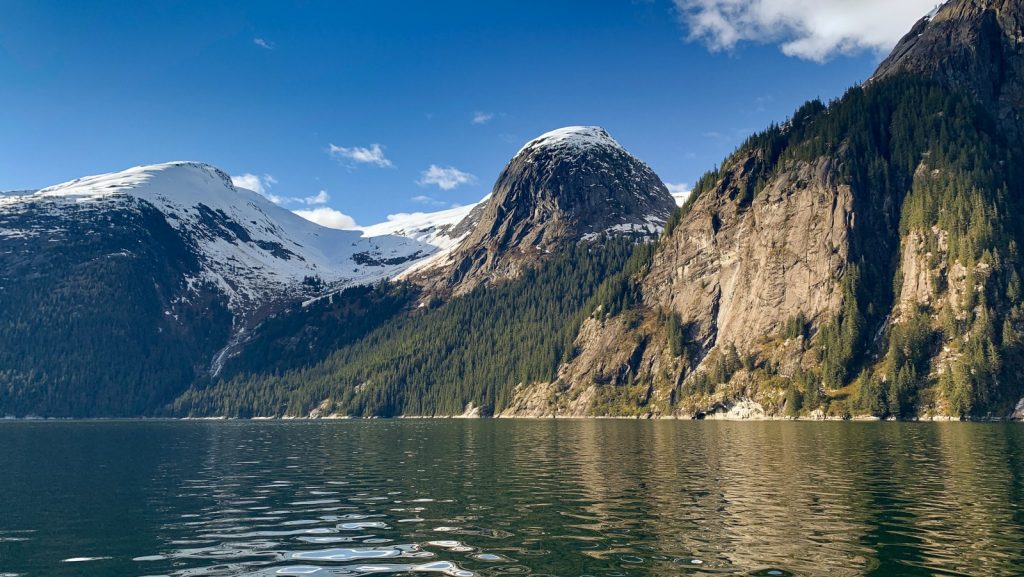 Eventually, we would turn back to return to the only anchorage available in the area, all the way back to the entrance, just before the cannon. We would arrive just before sunset, after having a hot dinner while underway, and drop anchor in the bay to the dismay of thousands of small water foul who squawked and squeaked for 15 minutes building up the courage for a mass-take-off to go elsewhere. We would sit in Meriwether’s cockpit for a while, sipping away at a drink and appreciating our lives before the long day would eventually call us to bed.