Two days of patience was finally going to pay off. The wait rewarded us with a damn near perfect wind forecast to sail across Dixon Entrance and Hecate Strait. This won’t be our first time, as we did it last year on the way up as part of a three-consecutive-day passage up the second half of the trip to Alaska. This latest passage would not be a multi-day event, but we did plan it to be an overnighter, just for kicks. Although we had two options to make it to Prince Rupert, I desperately wanted to sail across the open sea-like waters, not take the easy “inside” route that is more protected from the ocean swells. 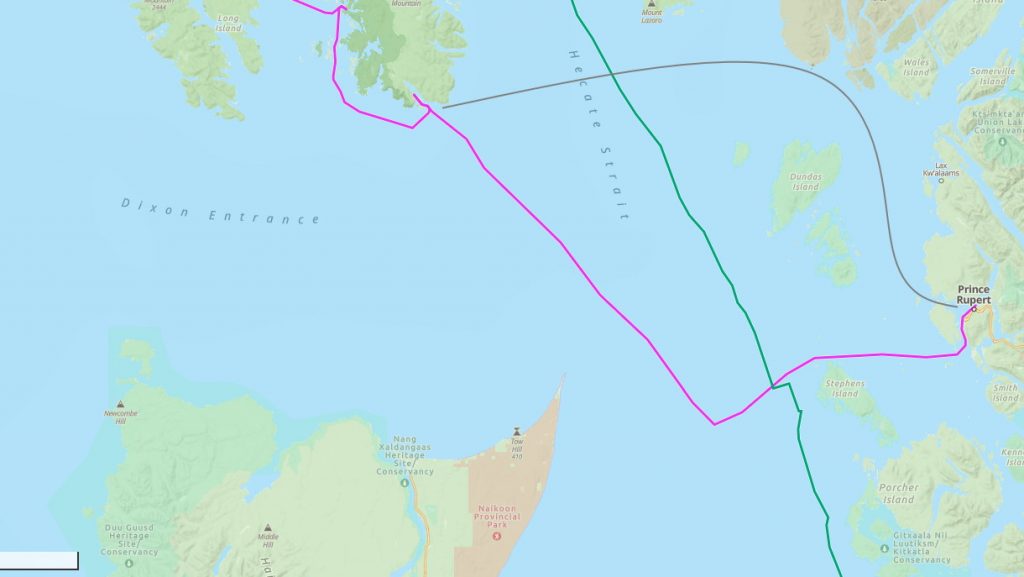 From the southern-most tip of Prince of Wales, we motored out into the open waters of Dixon Entrance. Dixon is no nice guy. It can be just as mean, or worse, then that bat-shit-crazy Juan De Fuca down south. There is an unfathomable amount of water surging between those two land masses every six hours. Add in an opposing blow and, well, you get hurt. We did not have any issues last year, and this trip gave us perfect conditions for a smooth (I say that word with some sarcasm as “smooth” does not apply when ocean swell exists) trip; current and winds in the same direction, starting light and building during the evening. 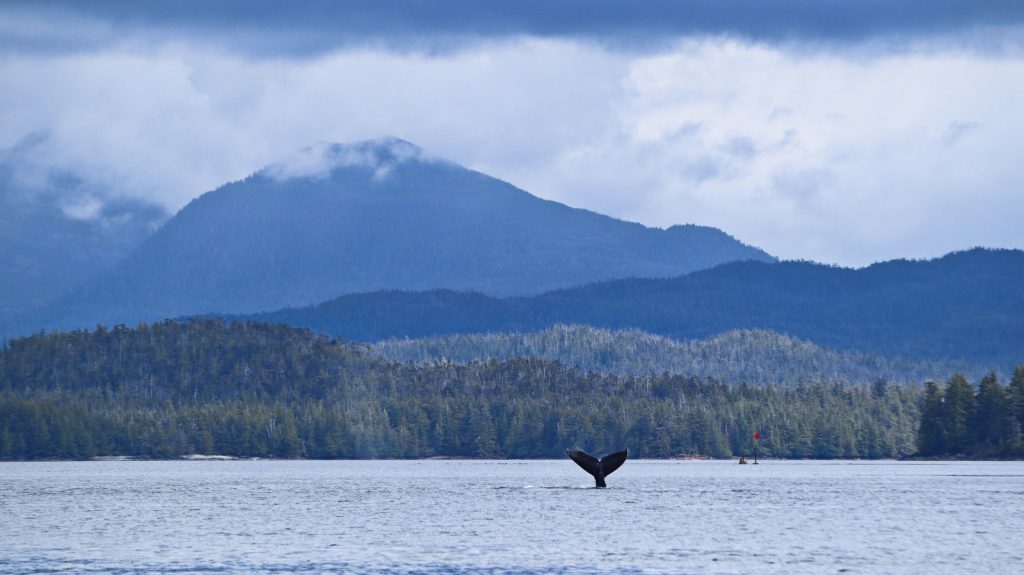 The obligatory wave goodbye from a resident whale started us on our 19 hour journey. 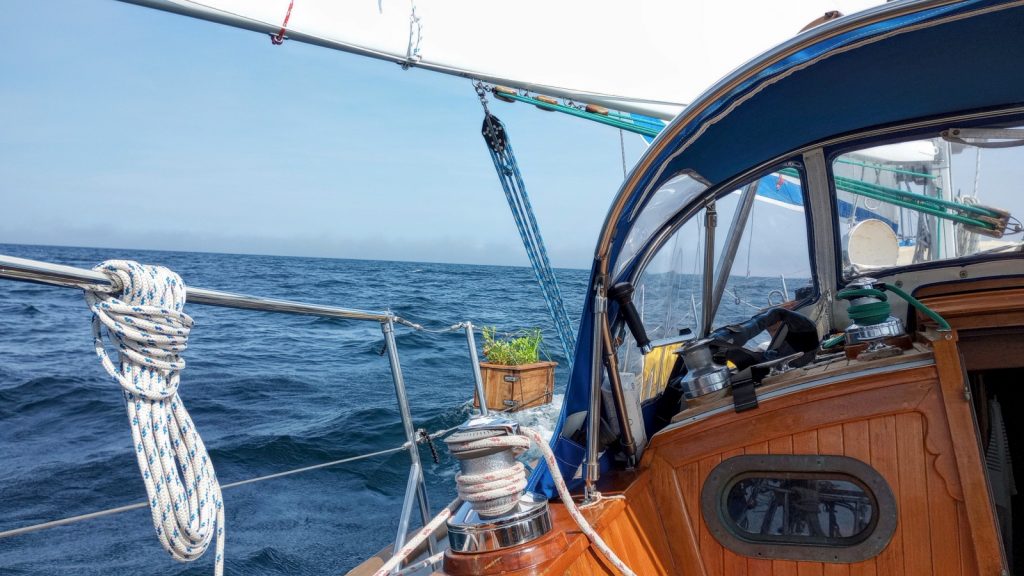 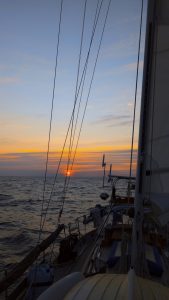 We would be able to raise our sails within a half-hour of pulling up our anchor. From that point, we were able to hold a single course, with the wind on or quarter, for more than 60 miles. And *that* is why I wanted to sail across open waters; a bit of consistency. It was our longest single-heading sail, meaning we made no adjustments to boat or sails. This has been completely unheard of in our sailing career. Sailing in the Puget Sound, BC, and Alaska means constant sail and heading adjustments. Rarely is there time to relax at all. This trip was hours and hours of holding that single course. The worst of it being the following swell that would rock the boat violently every few minutes.

Just before the sun completely left us for the short 4 hour night, we did reef in both sails and jibe Meriwether. This put her on the only other heading she needed to make a pass through rocks and islands that would end our sail some hours later.

The sun would set. Kerri and I would trade off shifts. She got some sleep, I was still too excited to do so. Before the next day’s sun would show itself, we would pass by – within a mile – a couple large cruise ships, with all their lights making them very obvious miles and miles out. It was all there really was to see, although Kerri did report some bioluminescent jelly fish blinking their disgust at us as we sailed over them. I did not see them personally, so I can not confirm her story. 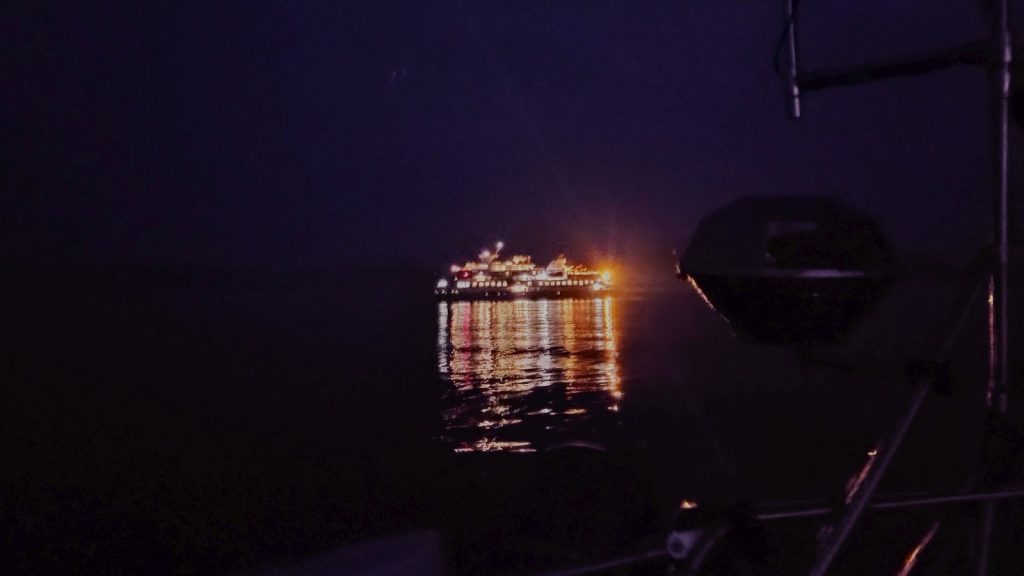 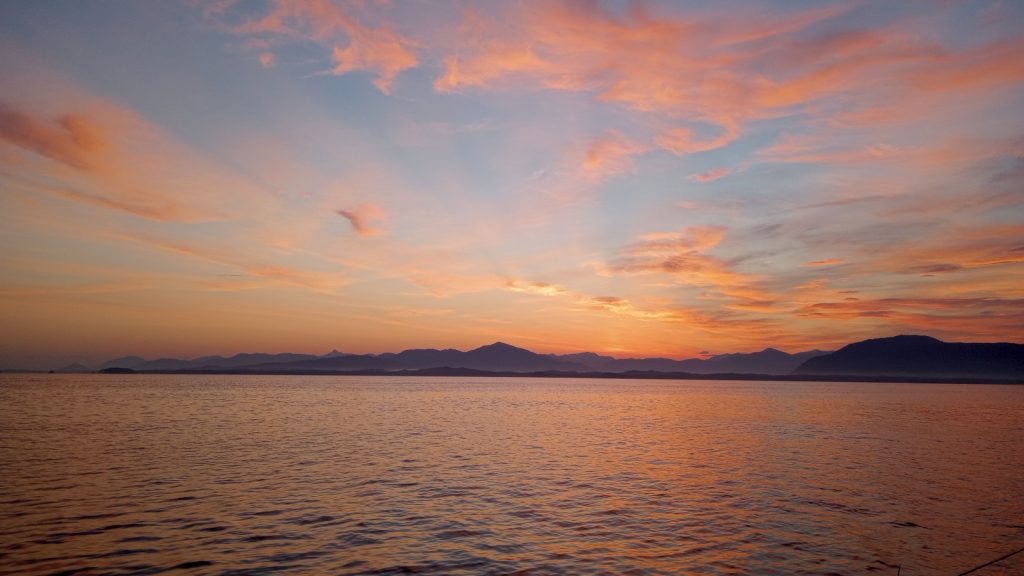 Jut before the sunrise we had arrived at the northern tip of Stephens Island. There are many smaller islands and rocks that the above image does not show. Enough that we knew we would not be sailing through them in the night. Even through we tried to slow ourselves down overnight, our speed got us there a bit early. Surely we could navigate between some well charted islands and rocks with all our high-tech navigation do-dads, but the real issue was of all the uncharted logs.

In open waters logs are very few and far between. In and around all these islands, and tidal currents, things start to get a bit cluttered again. Even in daylight, many of these logs – as large as Meriwether – lay only an inch or two above water, making them invisible until within a few boat lengths. At night… the only warning you get is the heart stopping thud as contact is made. It is a russian-roulette sorta-thing, with the vast majority of logs, by chance, just missing us. But, eventually – there is no way around it – you hit one square on. All you can do is hope it is a nice log, not one with big, pointy, sharp, branches waiting to punch a hole in your boat. We hit one on the way up last year, and another in these early morning hours, but neither have done any damage – partly because, once we were back on the motor, I kept us at idle speed until sunrise. At least we would hit at slow speeds if nothing else. 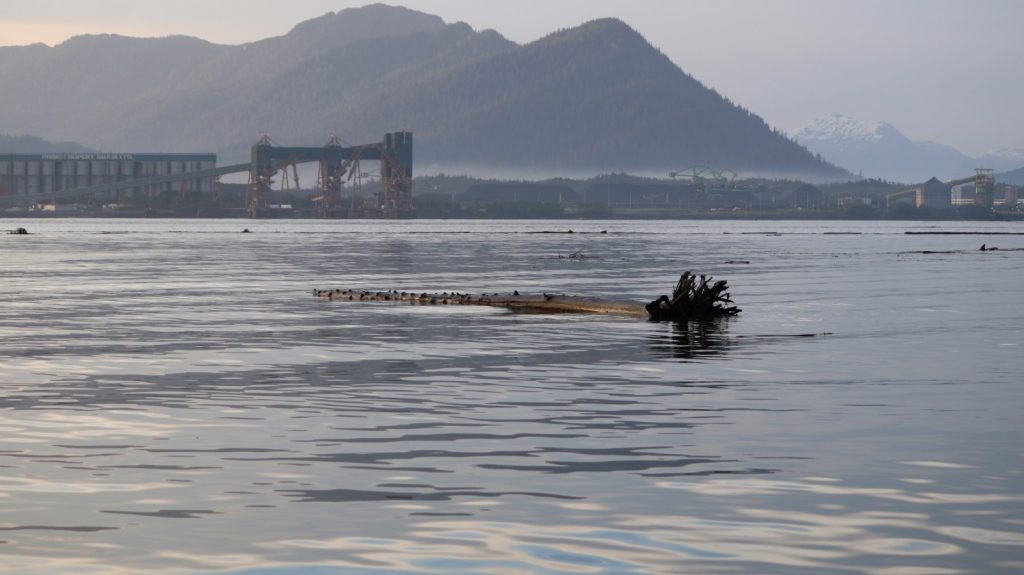 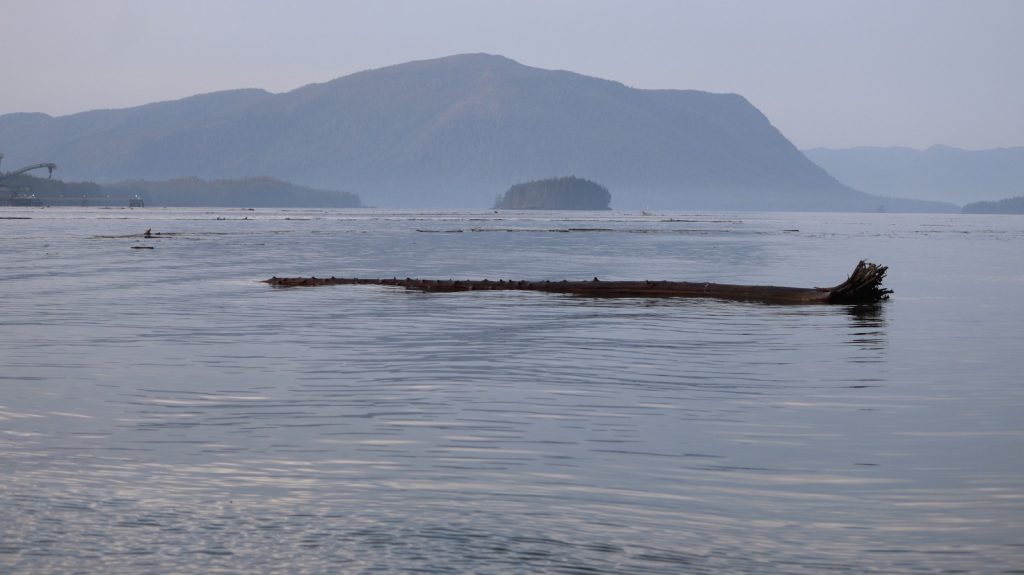 By 6 am, roughly 18 hours after departing Alaska, we had arrived in Prince Rupert, Canada. We only had to go through the Customs process to officially enter Canada. Problem was, the offices didn’t open for another two hours – a time in which we could not even set foot on the dock. Quarantined on our boat, we got cleaned up and started sorting through the Internet happenings missed during our multi days offline. Eventually we were able to call into Customs who informed us they lost our forms submitted online days before. We had to resubmit. By the time we called back, we were put on hold for over an hour only to be hung up on! The tears began to flow at this time. Kerri called back – half an hour later was told we resubmitted wrong… “try again, call back, goodbye”. This went on for another two hours with random hang-ups, call backs, and 30+ minute hold times for each. This was not the Canada Customs we got to know so well last year… we may as well have been trying to get a questions answered at a California DMV or the IRS. Eventually it was all sorted out, although there was serious concern that our herb-planter was about to get us removed from the country – seriously. 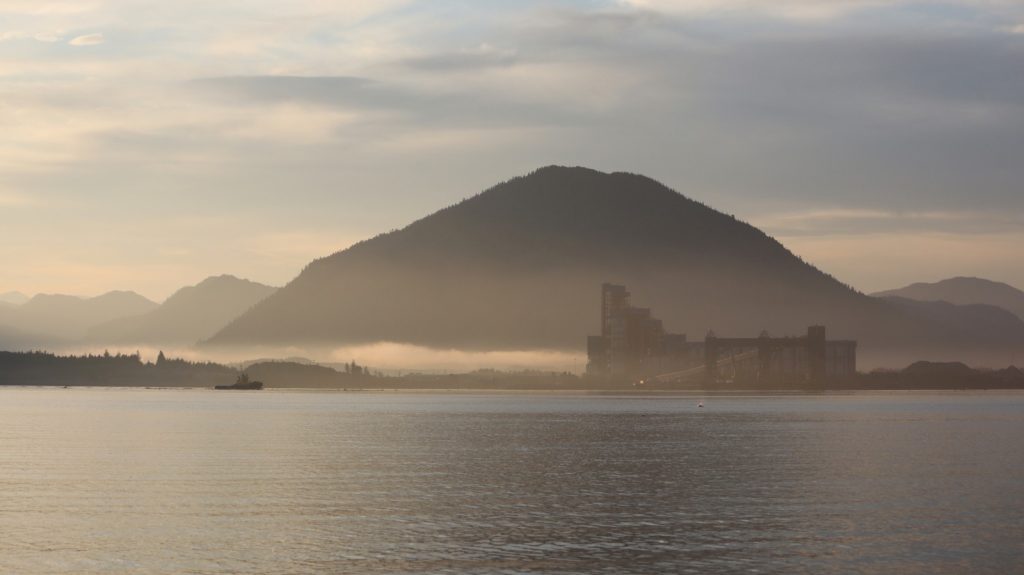 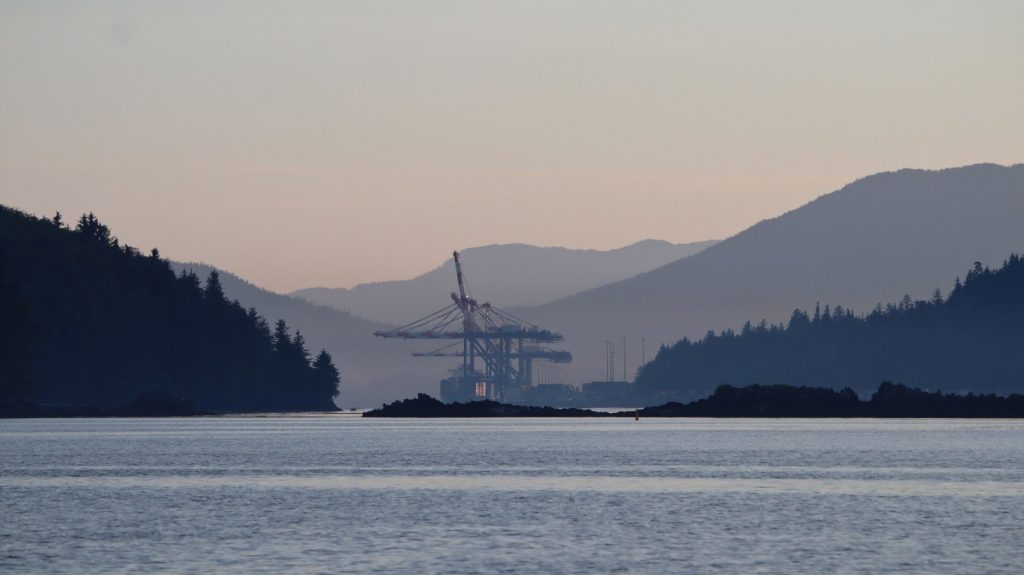