30 nautical miles away, just across Chatham Strait, is a narrow inlet with steep slopes and it’s entry clearly marked with large red-rock mountains – hence the name; Red Bluff Bay. When I was planning this portion of our route, it stood out to me for two reasons; 1) the river at the head of the bay was labeled as a dinghy-trail, and 2) the reviews from other cruisers were gleaming. 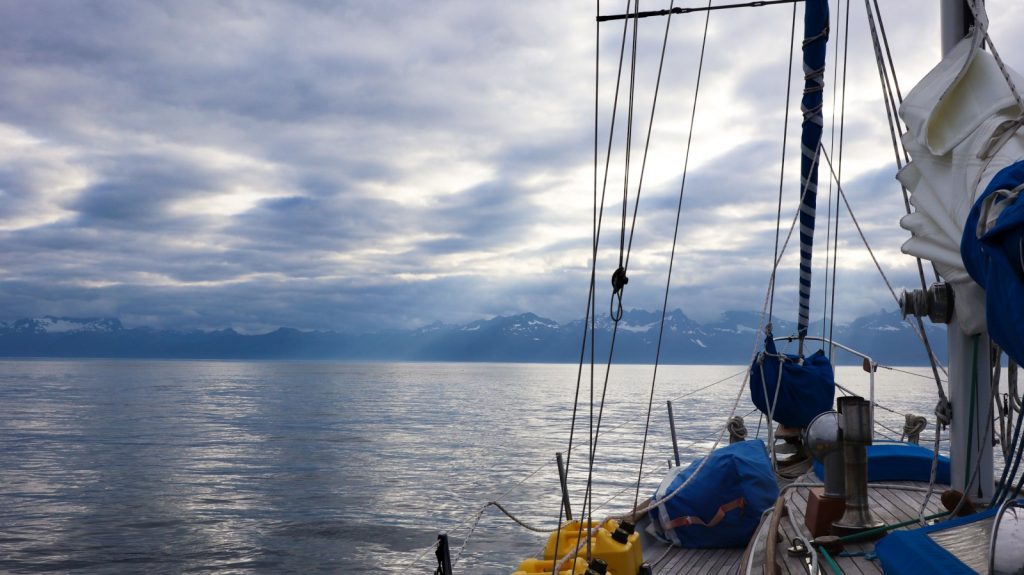 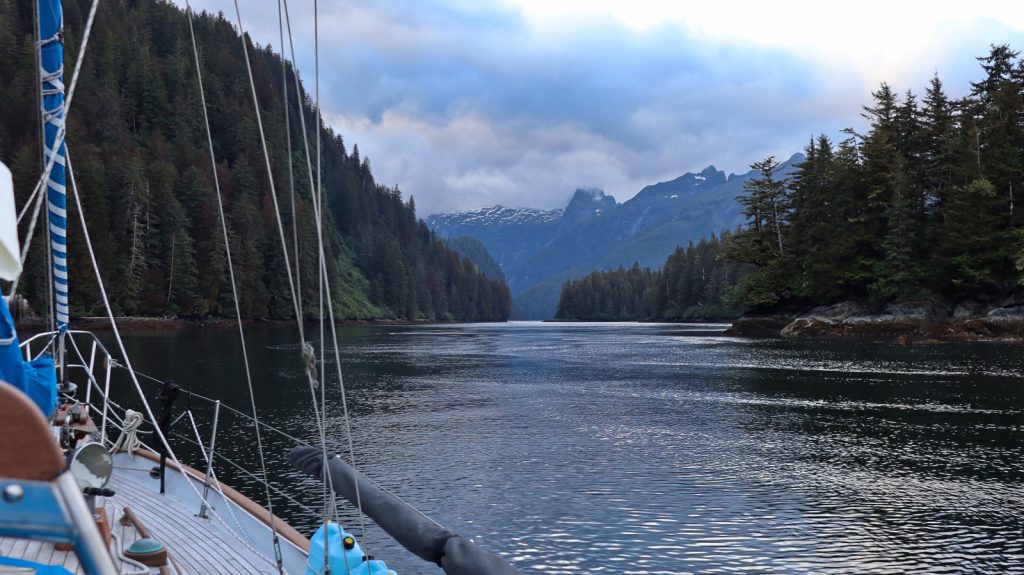 The route to Red Bluff was completed on Friday evening, after Kerri’s work day and before the sun set. Thirty miles is a long haul – or used to be not that long ago. It takes about six hours to complete, which just doesn’t feel so bad anymore, thanks mainly to the autopilot. No wind was forecast for the entire weekend so we only half prepared to raise a sail, just in case. Otherwise it was more of the same; motoring in Alaska. Not much happened during the transit other than running across yet another chartered mega-yacht that drove erratically, as if a texting teenager was at the helm (they are all professionally captained). It is just what they do I suppose. Thankfully, they were headed a different direction. 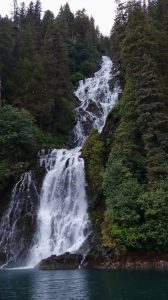 As we started in Red Bluff Bay, it gave us a taste of the beauty of the place. Navigating through a few smaller islands that guard the entry, life slowly transitioned from big open waters to tight fjord-like views. it didn’t take long for the waterfalls to begin showing themselves. Small at first, but after a traversing three-quarters the length, the star of the show emerged; a huge cascade originating from a lake way above our head and well out of sight.

The charts clearly stated that we could navigate Meriwether almost all the way to the bottom of the falls if we wished. Though it would have been a great way to wash the decks, we chose to appreciate it from a few boat lengths away before anchoring in the nearby bay about a quarter mile away. The waterfall remained a top sensory item as it’s roar could not be ignored.

The bay was a typical slice of Alaskan paradise with the thundering waterfall, flat meadow to the other side with a flowing river exiting into the bay. Soaring eagles, jumping fish, and the promise of bears all framed by majestic snow capped mountains… oh my! We had it all to ourselves too… for a few minutes. The texting teenager had made a decision and steered the big motor vessel and it’s passengers into Red Bluff Bay as well. We would have company for the night. At least they (and the yacht itself) were a good source of jokes between Kerri and me as we hung out in the cockpit before going to bed. 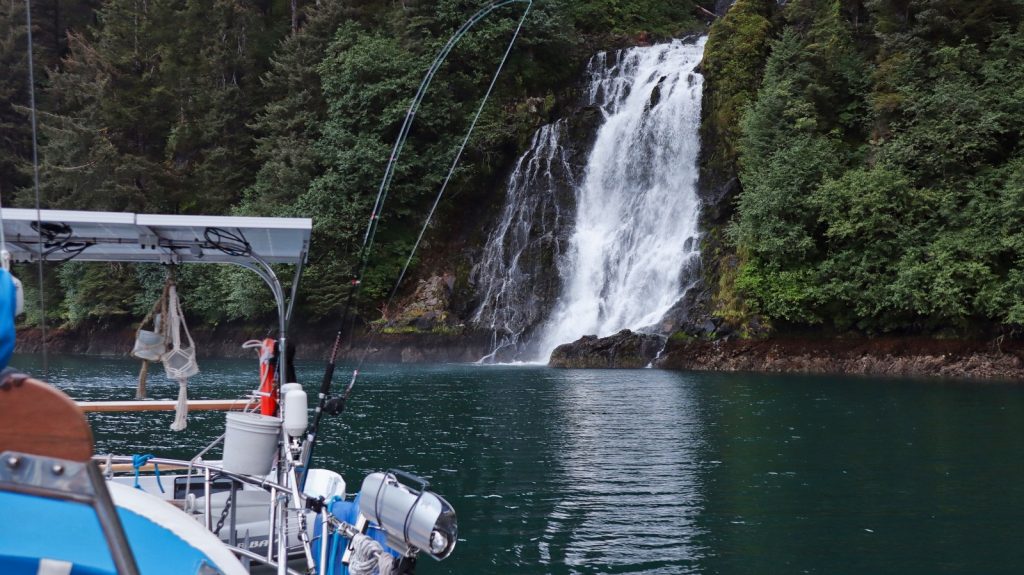 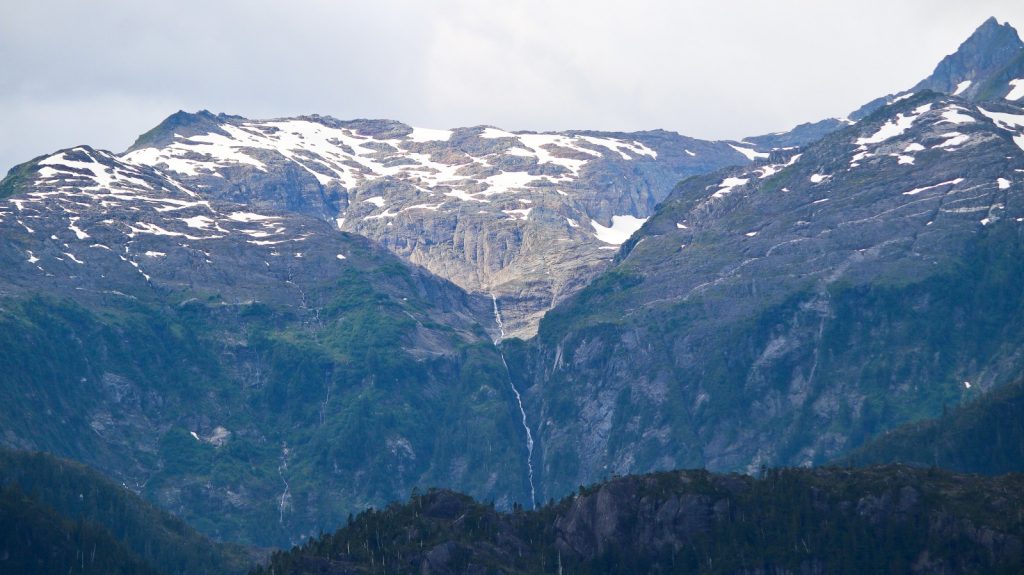 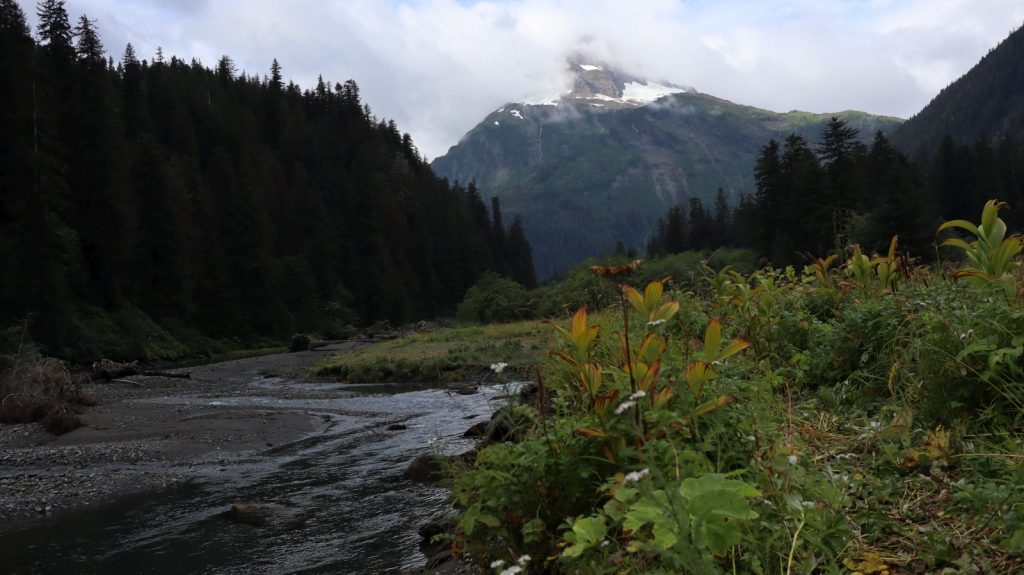 In the morning we set out in the dinghy to see about this ‘dinghy trail’. Before setting out I had already spotted bears ashore through the long-lens of the camera, but we planned to stay in the dinghy this day. Plans… why bother. The ‘trail’ was simply too shallow, so after only a few hundred yards we beached the small boat to walk a spell on land. As luck would have it, just as we set out to enjoy the meadow so did the crew and passengers of the yacht. In their much larger and faster dinghy they beat us there and had already off-loaded their heavily perfumed passengers who immediately set off to chase down the bears to snap their Instagram pictures. Kerri and I only took a small stroll before returning to Meriwether. It was crazy beautiful, but the hefty amount of bear poo and tons of fresh tracks gave a clear sign that this is their hood and we should enjoy it at a distance, so we did.

By late morning we were already packed up and preparing to move, this time to an even more amazing place just 20-some-odd miles to our north, passing even more waterfalls along the way. 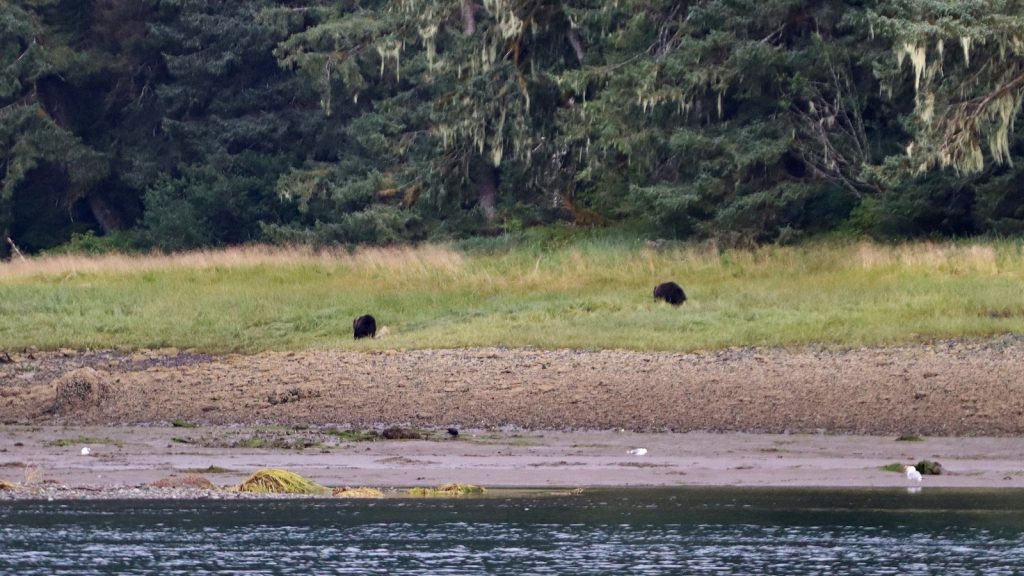 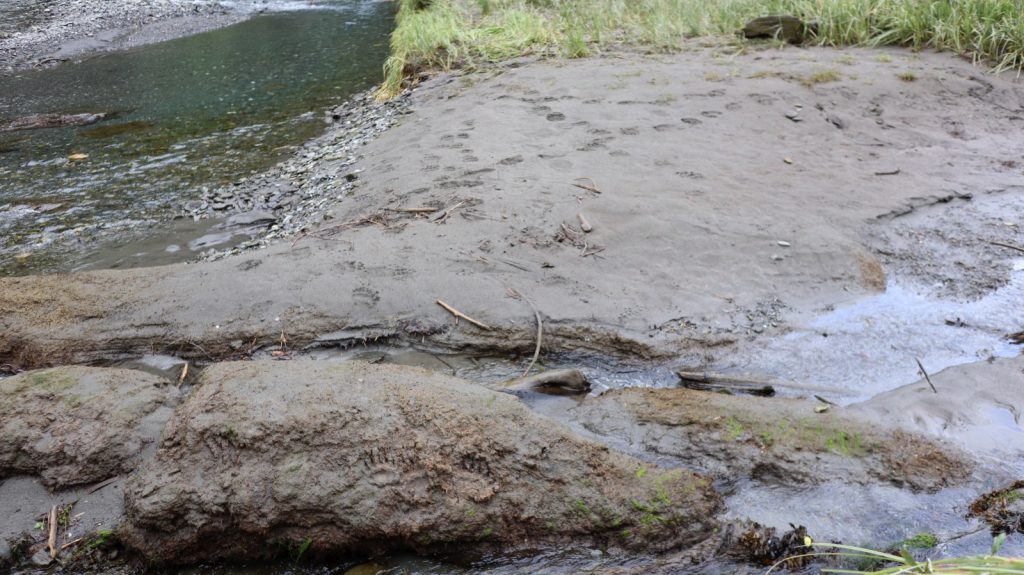 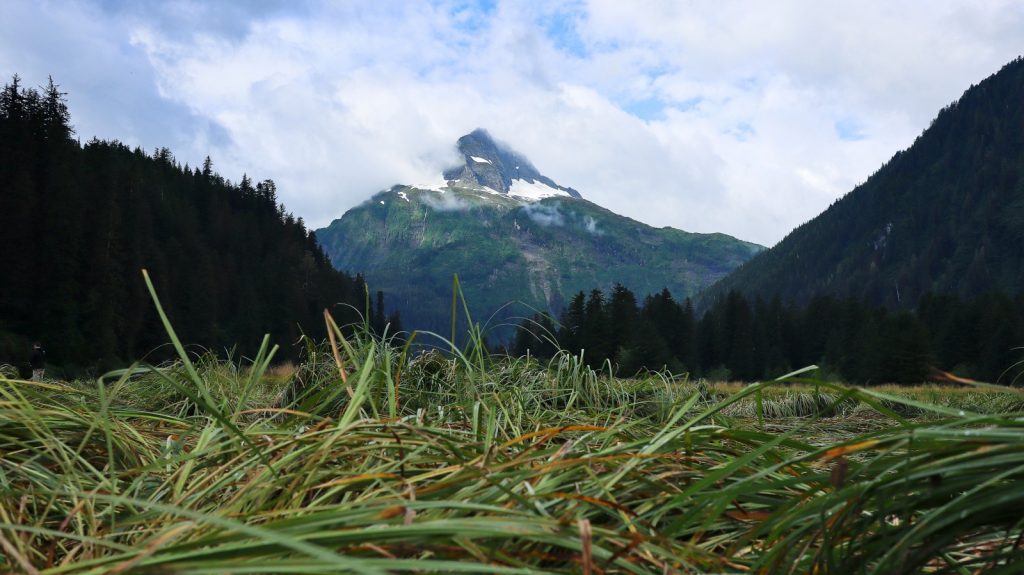 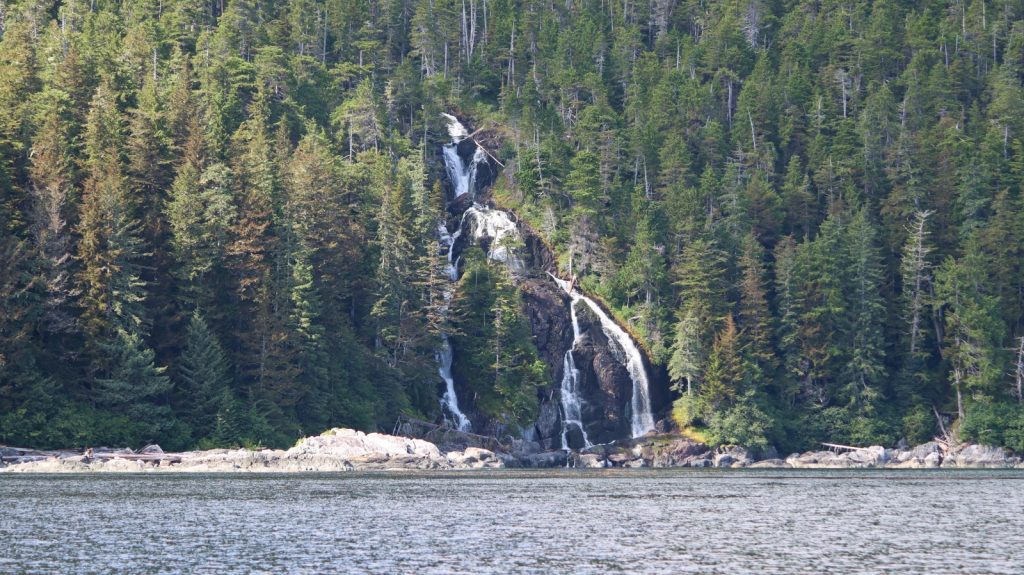 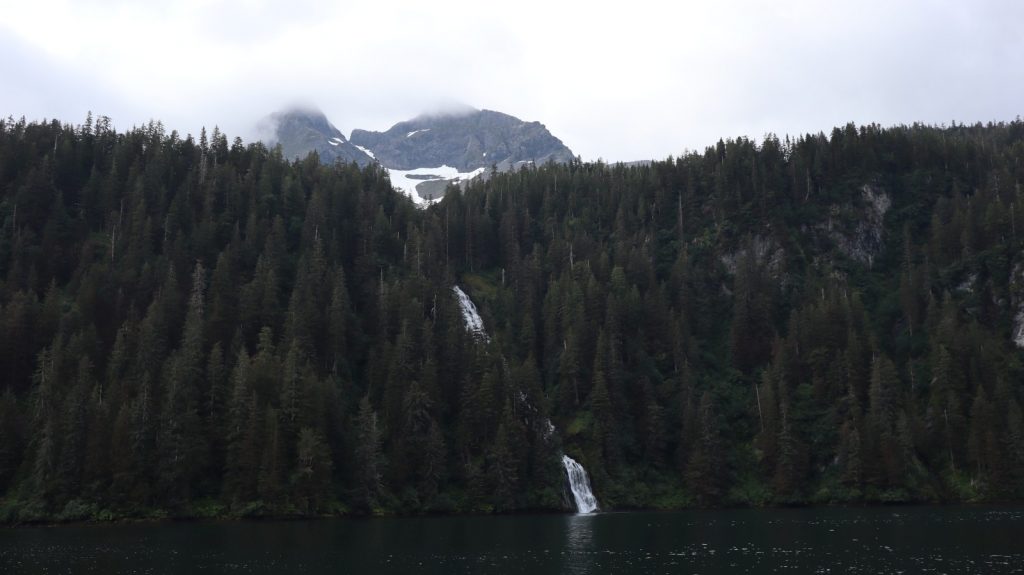